Xmas Massacre! TFN’s Stuart Dowell looks back at the grisly tale of a Christmas Eve murder

In the early of hours of Christmas Day in 1976 three innocent people, a man, a child and a pregnant woman, were brutally murdered in one of the bloodiest crimes to have taken place in post-war Poland.

Particularly shocking was not just the triple murder itself, but that it happened in front of about 30 witnesses, none of whom raised a finger to stop the murderers.

Almost everyone remained silent or lied during the subsequent investigation. All of them signed an oath of silence in their own blood moments after witnessing the horrific crime in a ceremony staged by the murderers.

After an investigation riddled with errors by hapless cops, the conspiracy of silence was broken by a child. However, the boy’s bravery would end tragically for his family. 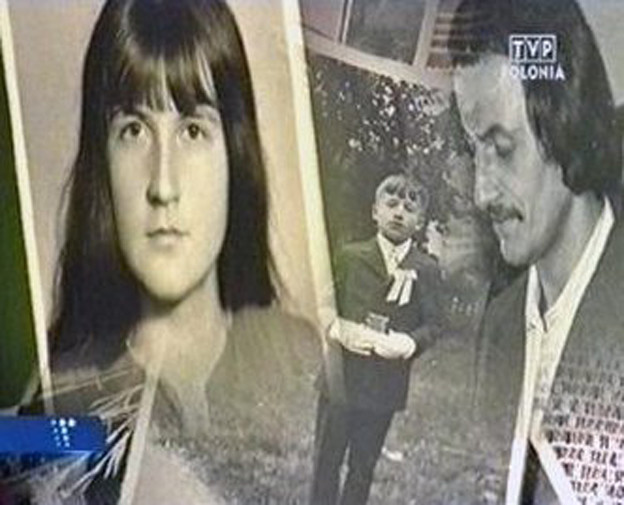 The recently wed couple 18-year-old Krystyna and 25-year-old Stanisław Łukaszek and Krystyna’s 12-year-old brother Mieczysław, were lured out of the church where they had been attending mass.TVP Polonia

The direct motive for the triple murder was tragic in its banality: a dispute over a sausage.

Everything took place on the night of Christmas Eve at midnight mass in the church in Połaniec near Tarnobrzeg.

The recently wed couple 18-year-old Krystyna and 25-year-old Stanisław Łukaszek and Krystyna’s 12-year-old brother Mieczysław, were lured out of the church just after the beginning of the mass by being told that her father was drunk at home and causing a scene.

The three of them immediately set off on foot in the direction of Zrębin, their home village, about 5 kilometres from Połaniec. 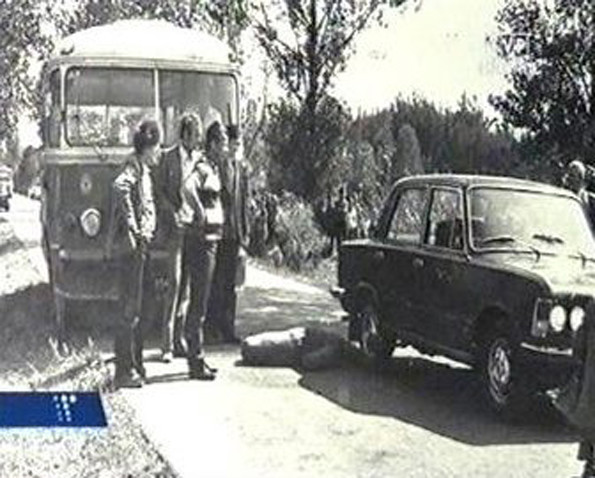 The boy’s head was placed under the car which then ran over his head.TVP Polonia

The killers and victims knew each other well. They lived in the same village, the head of the killers, Jan Sojda, was known among locals as the king of the village. He had more money than the other villagers, he ran a large farm and he owned the only tractor in the village, which he would lend to his neighbours, in return for favours.

He was a juror in the local court and people approached him to settle disputes. He was a man of respect.

However, he was also cruel. When a neighbour denied Sojda’s claim this his dog had killed and eaten a hen from Sojda’s farm, the next day he found his dog with its stomach cut open inside which were the remains of chicken feathers and claws. 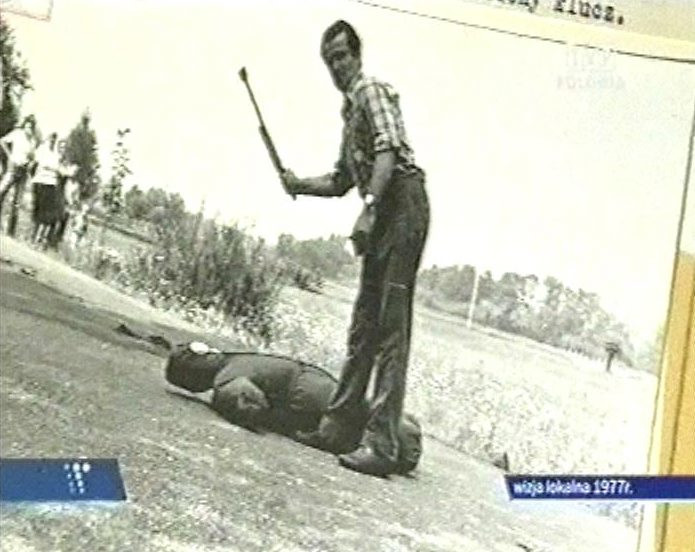 Jan Sojda, who was known among locals as the king of the village, smashed the couple’s head in with a wrench.TVP Polonia

Sojda had been in conflict with Krystyna’s family, the Rojs, since the 1940s. When Sojda had raped a girl he was working with in the field, the Rojs helped the police bring him into custody. Sojda only served eight months, but he never forgot what the Rojs had done.

The feud was to come to a head in the summer of 1976, during the wedding of Krystyna and Stanisław. Paradoxically, the wedding was initially supposed to be a thaw in relations between the two families.

Sojda was invited to the wedding and his sister helped prepare food in the Roys’ kitchen.

However, the good relations ended when Sojda's sister was accused by Krystyna's family of stealing wedding sausages. Burning with  resentment, she demanded tableware to be used at the wedding as ‘compensation’ for the accusation, which she received. 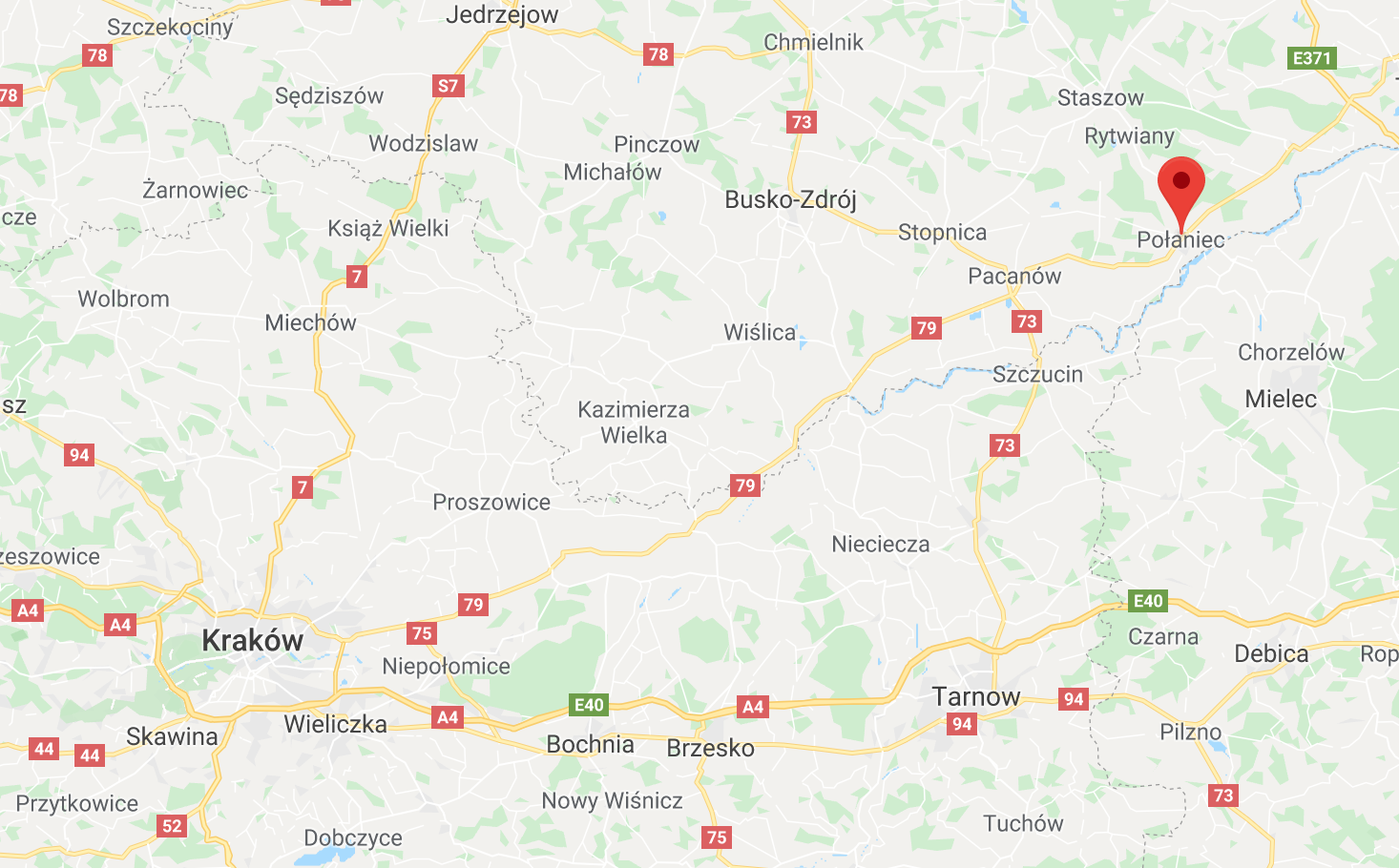 Jan Sojda, meanwhile, considered the slur against his sister to be the final straw. He publicly announced that he would eradicate the whole family, which he did together with other men from his family on Christmas Eve.

As the two groups met on the snowy road that murky night, a Fiat driven by one of Sojda’s sons-in-law deliberately knocked down Miec.zysław, breaking his leg. When the boy screamed in pain, his brother-in-law Stanisław ran to him. Sojda and his brother-in-law Józef Adaś, armed with a big steel wheel wrench, got off one of the two buses and beat Stanisław to the ground with heavy blows.

Seeing this, the eighteen-year-old pregnant Krystyna fled in fear into the field. However, Sojda and Józef Adaś and another villager holding a lantern caught up with her and beat her to death with the wrench. 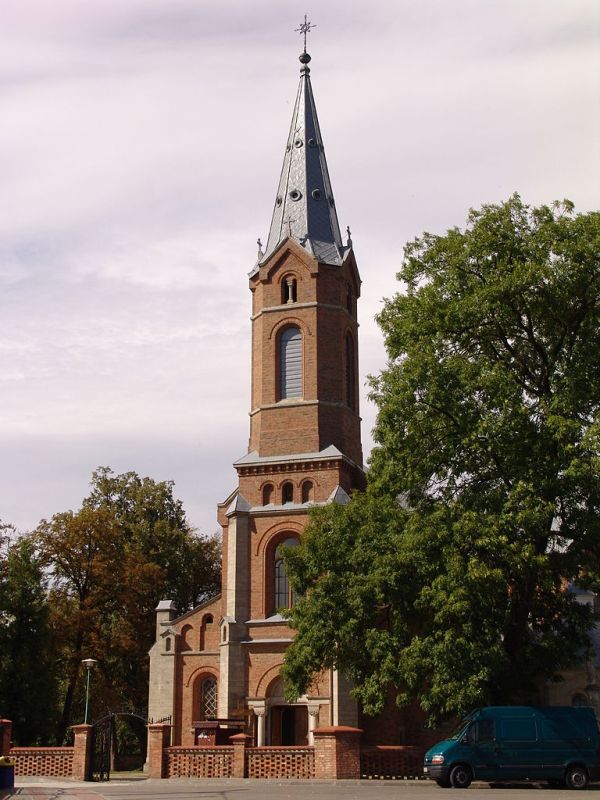 The church where the family had gone for mass.Kamil272 / Creative Commons Attribution-Share Alike 3.0 Poland licence

Back on the road, they saw that Stanisław was still alive, so they killed him with the wrench. They then set about murdering Mieczysław.

Sojda’s son-in-law got into the car and Sojda methodically lined up his head with the wheel of the car, then instructed the driver to run over the boy until his skull burst

All of this was watched by an audience of around 30 villagers in one of the buses stupefied by what they had seen and the vodka they had been drinking all night. Sojda did not care that they had seen everything. He wanted an audience; that was the point. To show everyone that he was the king of King of Zrębin.

Another of Sojda’s sons-in-law, Stanisław Kulpiński, ordered everyone to get off the bus. Sojda was already waiting for them holding arosary, a large wooden cross and a picture of the Virgin Mary. 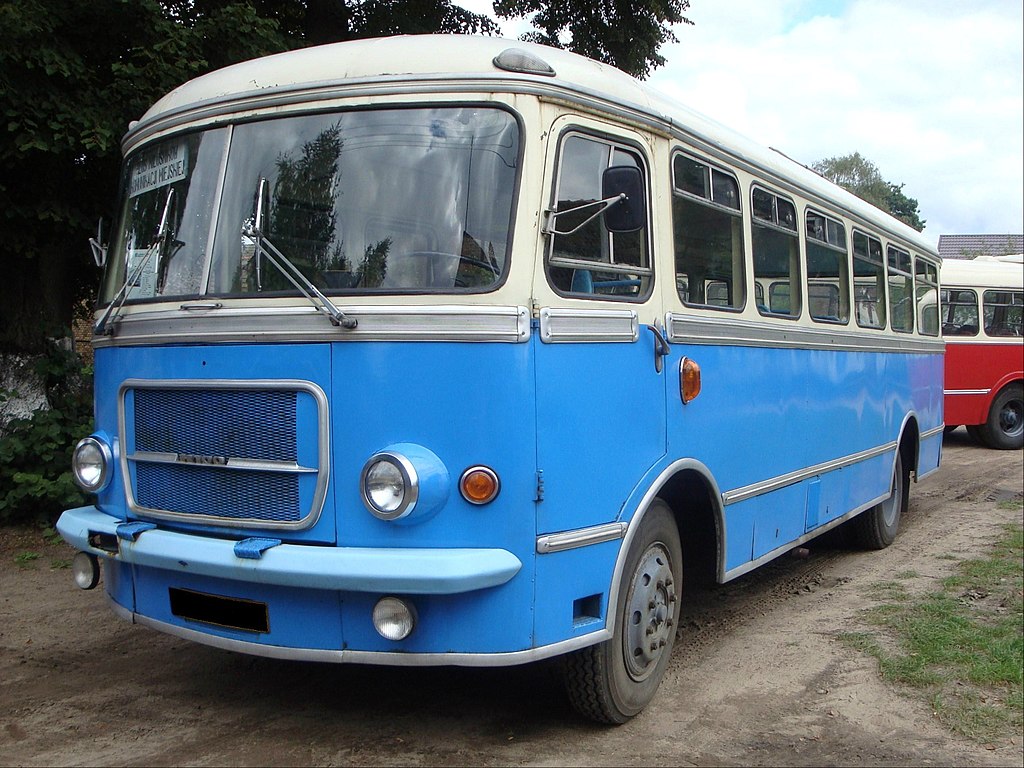 The horrific slaughter was watched by an audience of around 30 villagers in one of the buses stupefied by what they had seen and the vodka they had been drinking all night.Travelarz /Creative Commons Attribution-Share Alike 3.0 Poland licence

He lifted the picture above his head and said: “Repeat after me: I swear on my blood and on this holy cross that I saw nothing here. So help me God”, adding menacingly: ‘Otherwise you'll end up like them.”

They all repeated the oath without protest, kissed the cross and allowed Sojda to draw blood from their fingers with a safety pin to make a bloody mark on a white piece of paper. Meanwhile, large wads of cash were distributed among to group to buy their silence.

The group were then driven back by bus to the church, where they took part in the midnight mass.

Meanwhile, the perpetrators threw the bodies into the first bus and took them to Zrębin. There, they drove over the bodies and threw Stanisław and Mieczysław in a ditch to make it look like an accident. They placed Krystyna's naked body next to the bus suggesting that she had been raped. 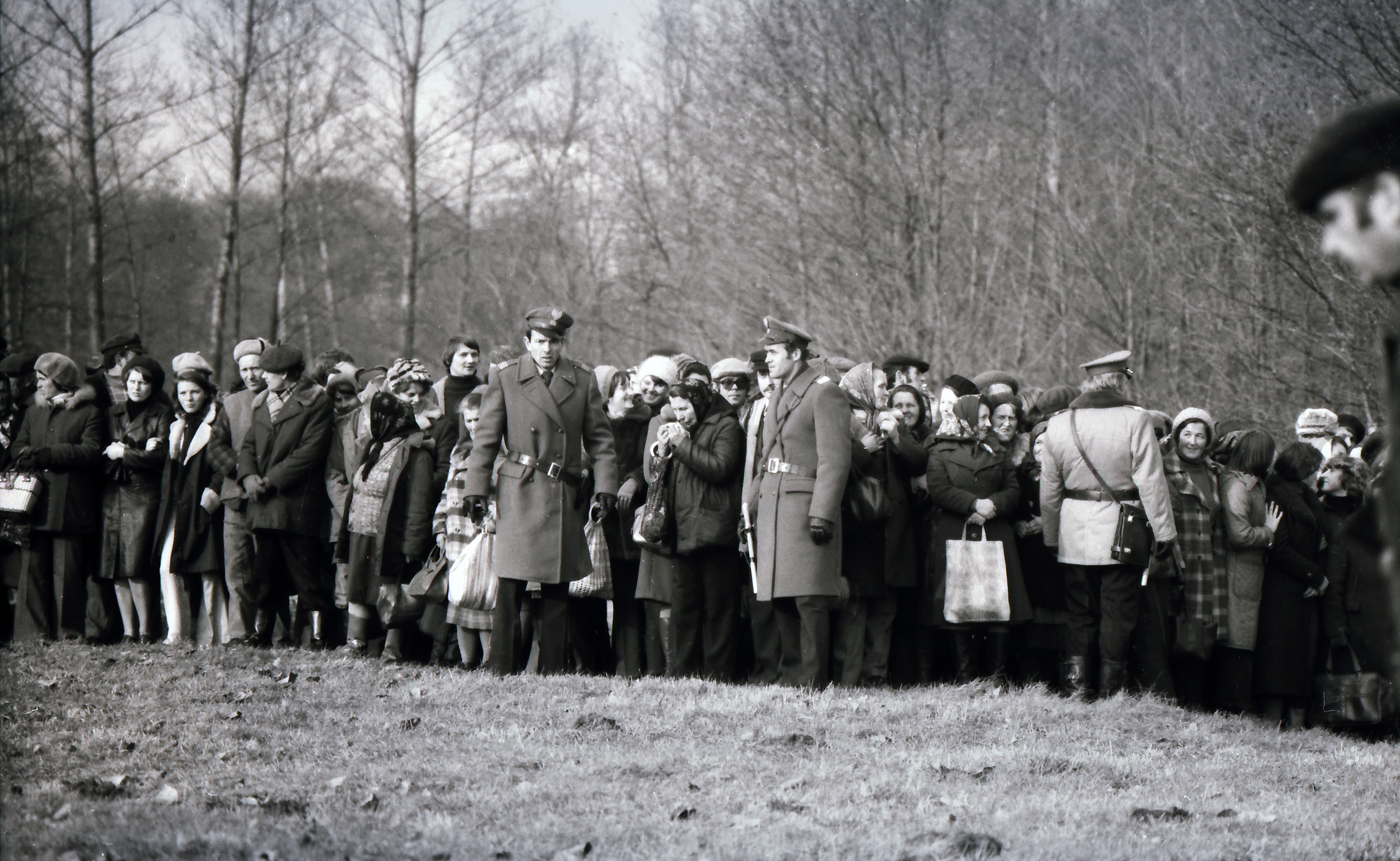 The investigation was riddled with errors by hapless cops, and hindered by a conspiracy of silence by locals.Michał Sielewicz/PAP

During the investigation, the police made a catalogue of mistakes. The autopsies were carried out by a doctor without any authorisation to do so. The bus was scrapped before any evidence could be taken and the crime scene was not secured properly. The police bought the story of an accident.

However, two days after the crime, fourteen-year-old Stanisław Strzępek, a friend of Mieczysław, went to the house of Józef Adaś and shouted: “You’re a bandit, it was you who murdered them!”

Stanisław was the son of the poorest farmer in the village and Sojda was the richest. When Sojda found out about the accusation, he invited the fourteen-year-old boy home for lunches, allowed him to drive the tractor and offered to buy his family furniture and a cow.

Stanisław’s father believed, however, that his son had seen something on that tragic Christmas Eve night and told Stanisław to tell the truth in court.

The pressure that Stanisław’s father was subsequently put under was too much for him. The ostracization by the people in the village, the stones thrown at his windows and the burning of his barn took their toll and he committed suicide. Sojda’s conspiracy of silence was broken though, and investigators started to believe that they were in fact dealing with a triple murder.

Later though, the State Council exercised its right of clemency by commuting the death sentence on Jerzy Socha and Stanisław Kulpiński to 25 years in prison.

The death sentence imposed on Jan Sojda and Józef Adaś was carried out. Jan Sojda was hanged on 23 November 1982 Kraków’s Montelupich prison.

Christmas Special: Stargazing with the ‘Guy from Google’