A pioneering institute in Wrocław is working on experimental therapy to combat antibiotic-resistant bacterial infections.

For 15 years, the Polish Academy of Sciences Phage Therapy Unit at the Institute of Immunology and Experimental Therapy’s Medical Centre has been looking for a cure for patients who have lost all hope that their ailments could be treated. 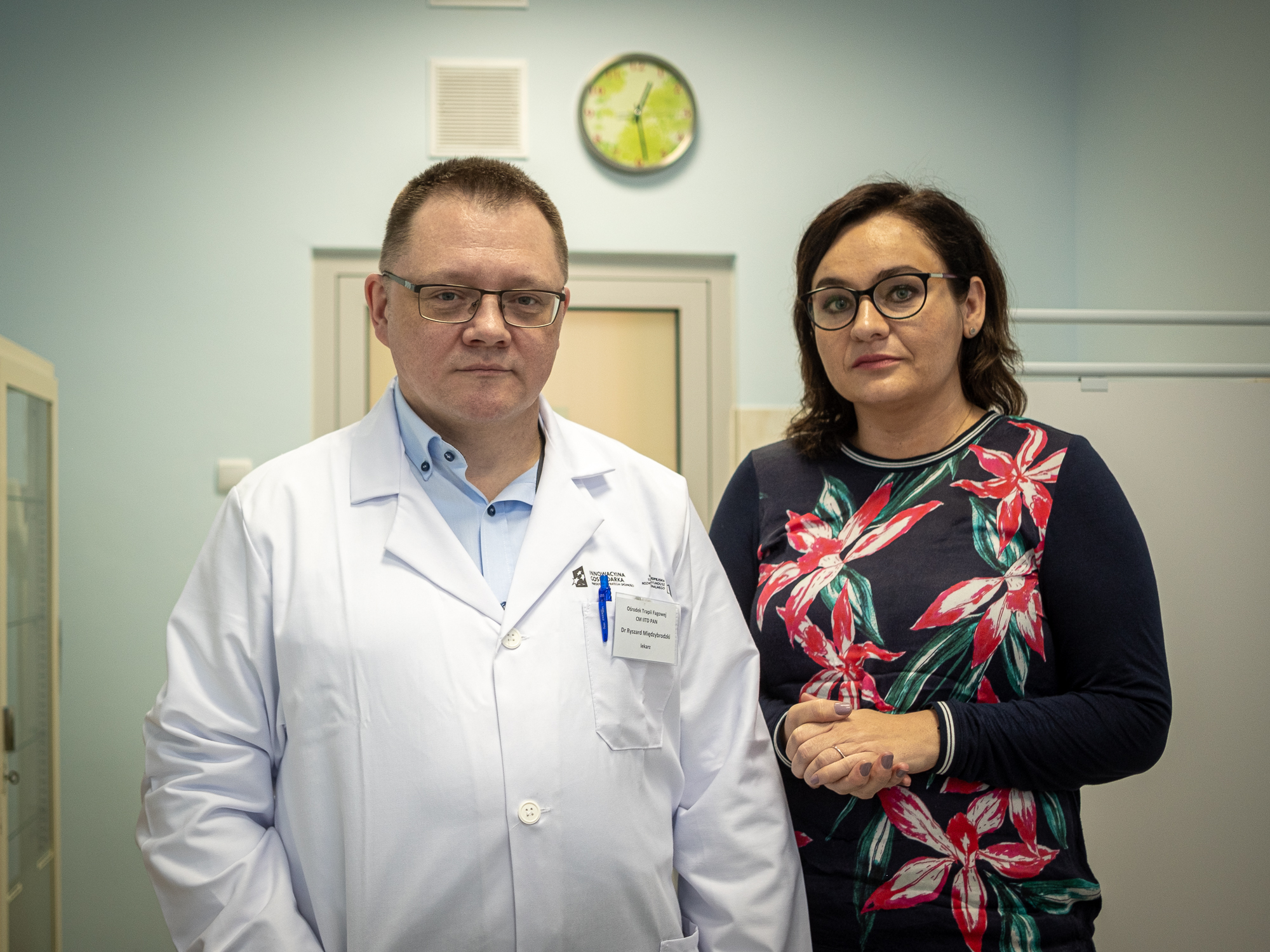 Doctor Ryszard Międzybrodzki with Anna Kabała, one of the Medical Unit's patients. Kalbar/TFN

TFN travelled to Wrocław to discover how a revolutionary therapy the clinic is working on could be the answer to an ever-mutating threats to our health.

In short, phage therapy utilises bacteriophages – bacterial viruses which attack only bacterial cells. A patient is treated with individually matched viruses, which are able to destroy different bacteria including those which are resistant to antibiotics and which cause life-threatening infections. 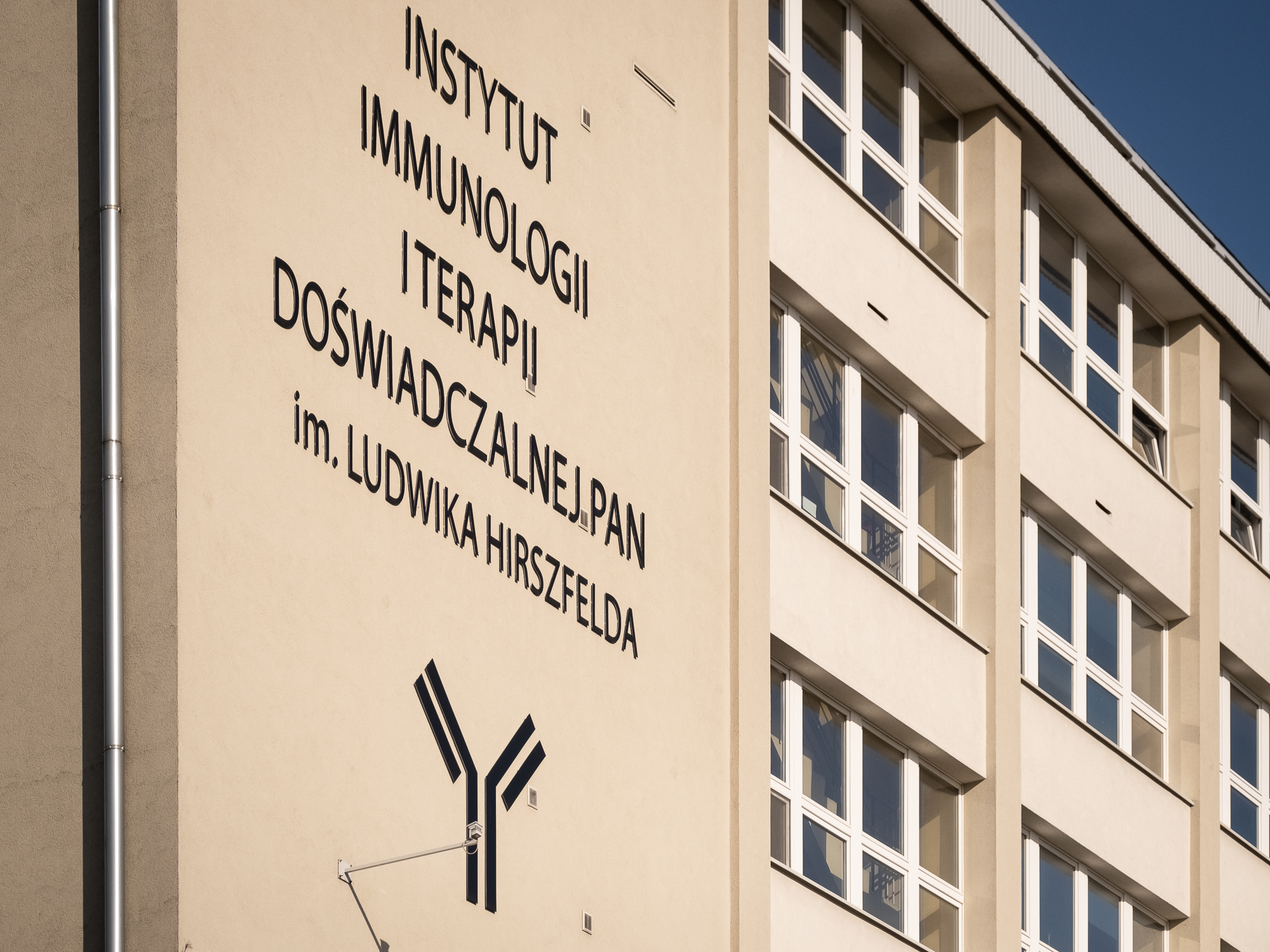 The Institute of Immunology and Experimental Therapy’s Medical Centre has been looking for a cure for patients who have lost all hope that their ailments could disappear.Kalbar/TFN

Professor Andrzej Górski, the institute’s director, told TFN: “Our centre treats antibiotic-resistant infections. The great problem in medicine today is that we are becoming defenceless against the bacteria that cause them.

“Although the market is big, as it is estimated that about $30 to 40 billion are spent on antibiotics annually, antibiotic resistance crisis is growing,” he continued.

With both bacteria becoming harder to kill and pharmaceutical companies finding providing newer and newer drugs unprofitable, a change in approach will be necessary. 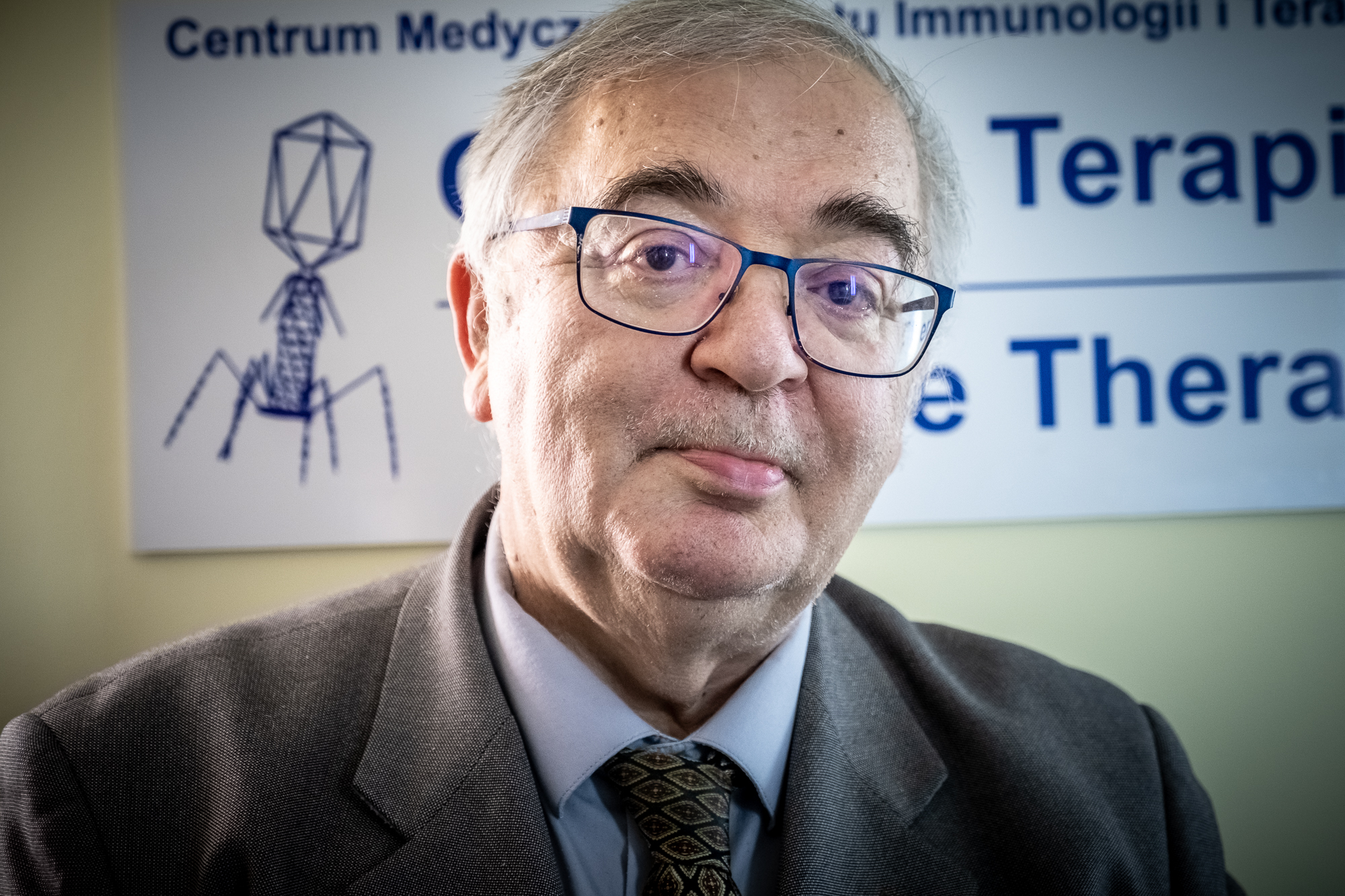 “Our centre treats antibiotic-resistant infections. The great problem in medicine today is that we are becoming defenceless against the bacteria that cause them,” says Professor Andrzej Górski.Kalbar/TFN

“Poland has a long tradition in this sphere, because, in fact, the first attempts to use phage therapy were made soon after regaining independence,” explained the professor. Phages were first observed in 1896 in the River Ganges  by Ernest Hanbury Hankin, who noticed their antibacterial properties.

The first tries at phage therapy were attempted before World War II, but the medical documentation from that time isn’t credible according to today’s requirements. After the war, research on phages in Wrocław resumed in the 1960s.

The Institute’s Medical Unit is supported by the Bacteriophage Laboratory, which stores over 600 different phages, carries out phage typing procedures, prepares the phage formulations for patients and performs some other necessary tests. 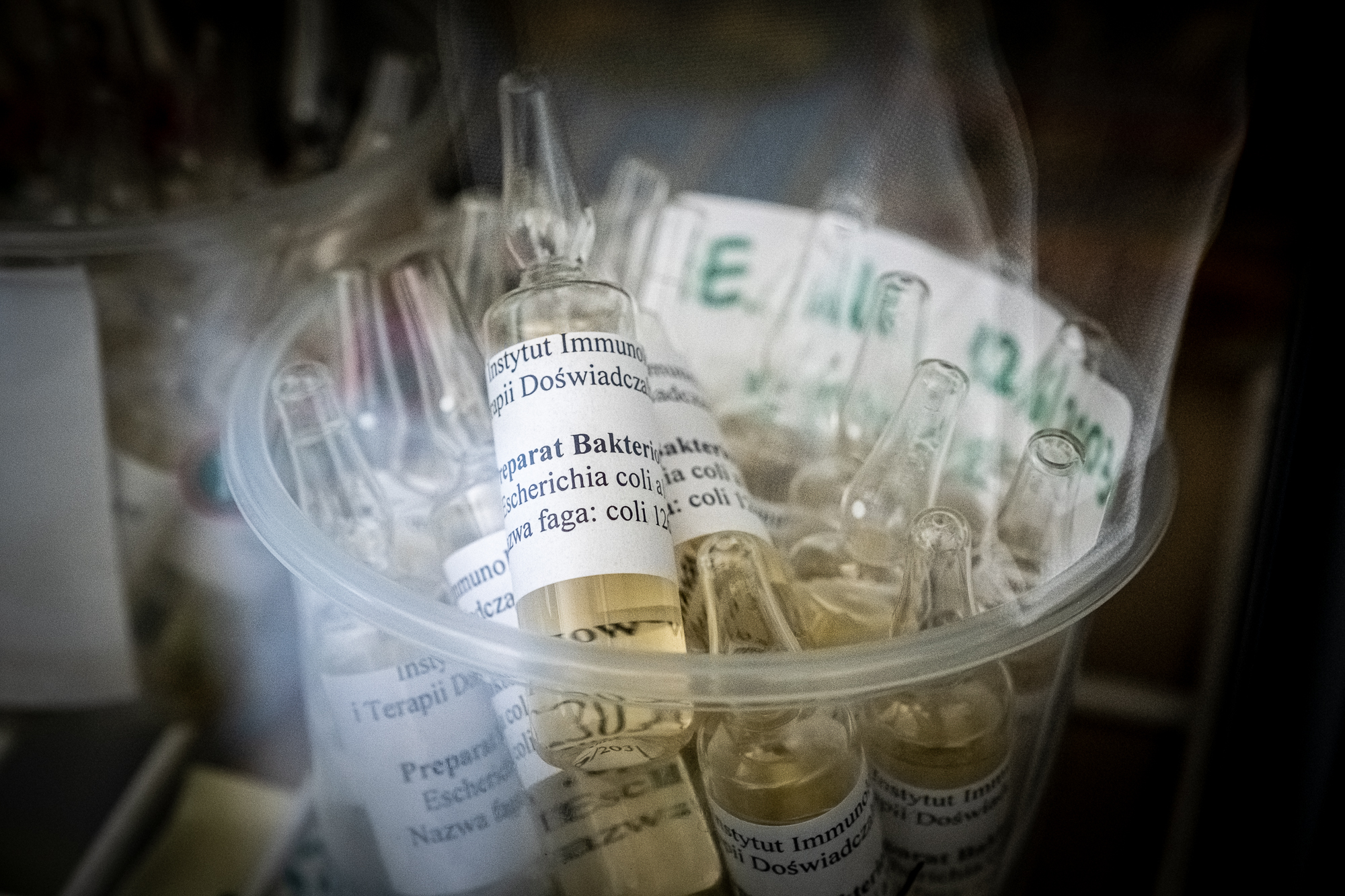 The Institute is supported by the Bacteriophage Laboratory, which stores over 600 different phages.Kalbar/TFN

Doctor Beata Weber-Dąbrowska, the principal specialist at the institute’s laboratory, said: “Phages naturally occur everywhere where bacteria are found, so even in the most extreme conditions such as hot springs, Arctic waters or the sands of the Sahara.”

To expand their collection of phages and be able to combat a wider variety of bacteria, the researchers are constantly working on obtaining new strains.

Phages, just like other viruses, are selective when it comes to which bacteria they’re effective against. The virus will attach itself to a bacteria and inject it with its own genome. The genome replaces the bacterial one and halts the infection, making the bacteria unable to reproduce. 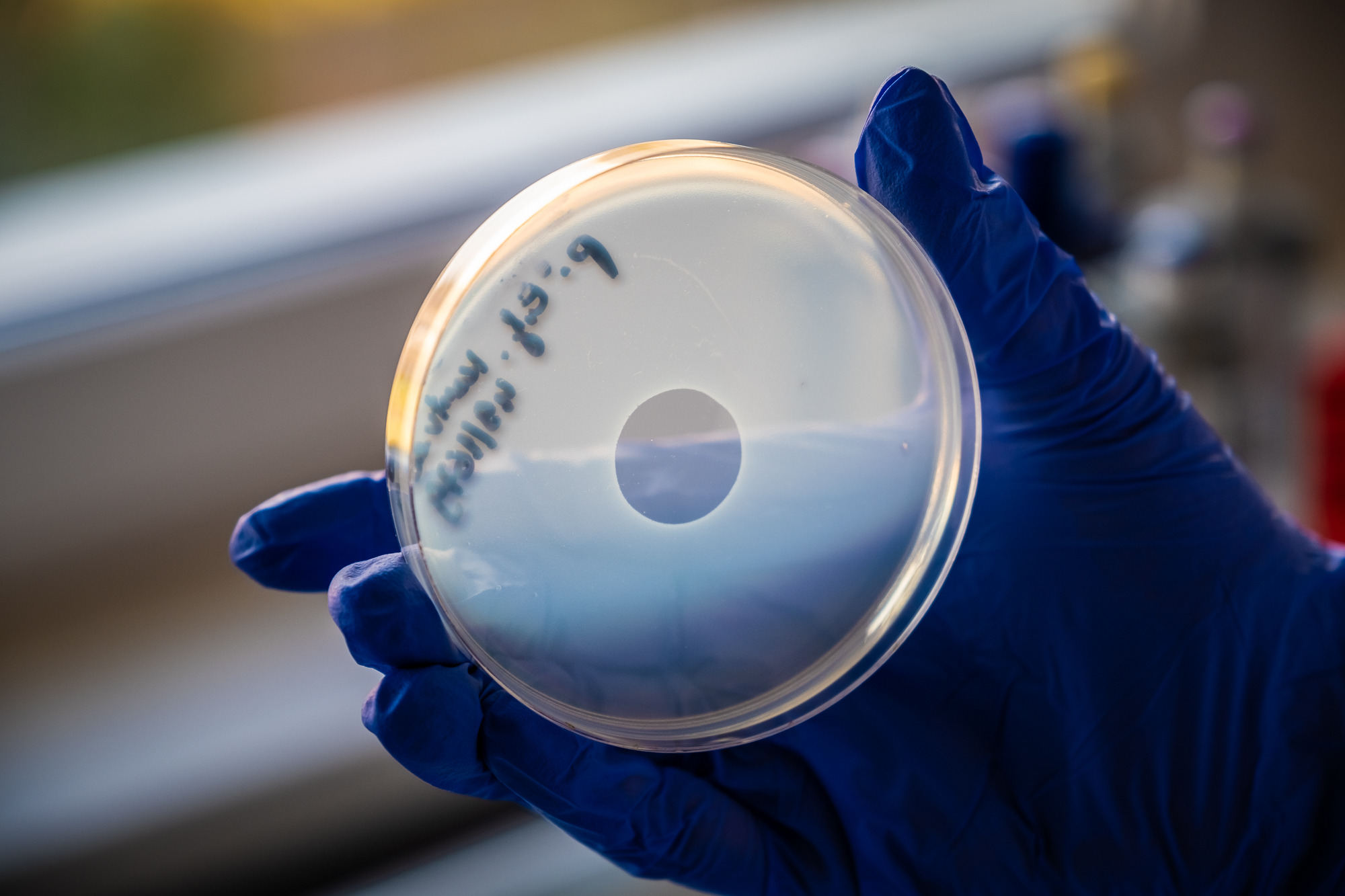 Phages can spring up anywhere: from Artic waters to desert sands.Kalbar/TFN

The main advantage of using phage therapy is its precision. By choosing the right type of phages doctors can be sure it will attack only the bacteria they want to counter. Doctor Weber-Dąbrowska said: “It doesn't have any effect on the body (...). We all carry phages, as I said they are everywhere, so, for example, we have a very large amount of phages isolated from samples taken from patients.

“The best environment for phages is the gastrointestinal tract because there are lots of bacteria,” she added. “Therefore, phages breed wonderfully there, but mainly for those gut bacteria.”

The Institute’s Medical Unit is not a clinic. As a research centre first and foremost, they accept only a handful of cases – patients who often have been struggling with recurring infections for years and were unable to find help elsewhere. 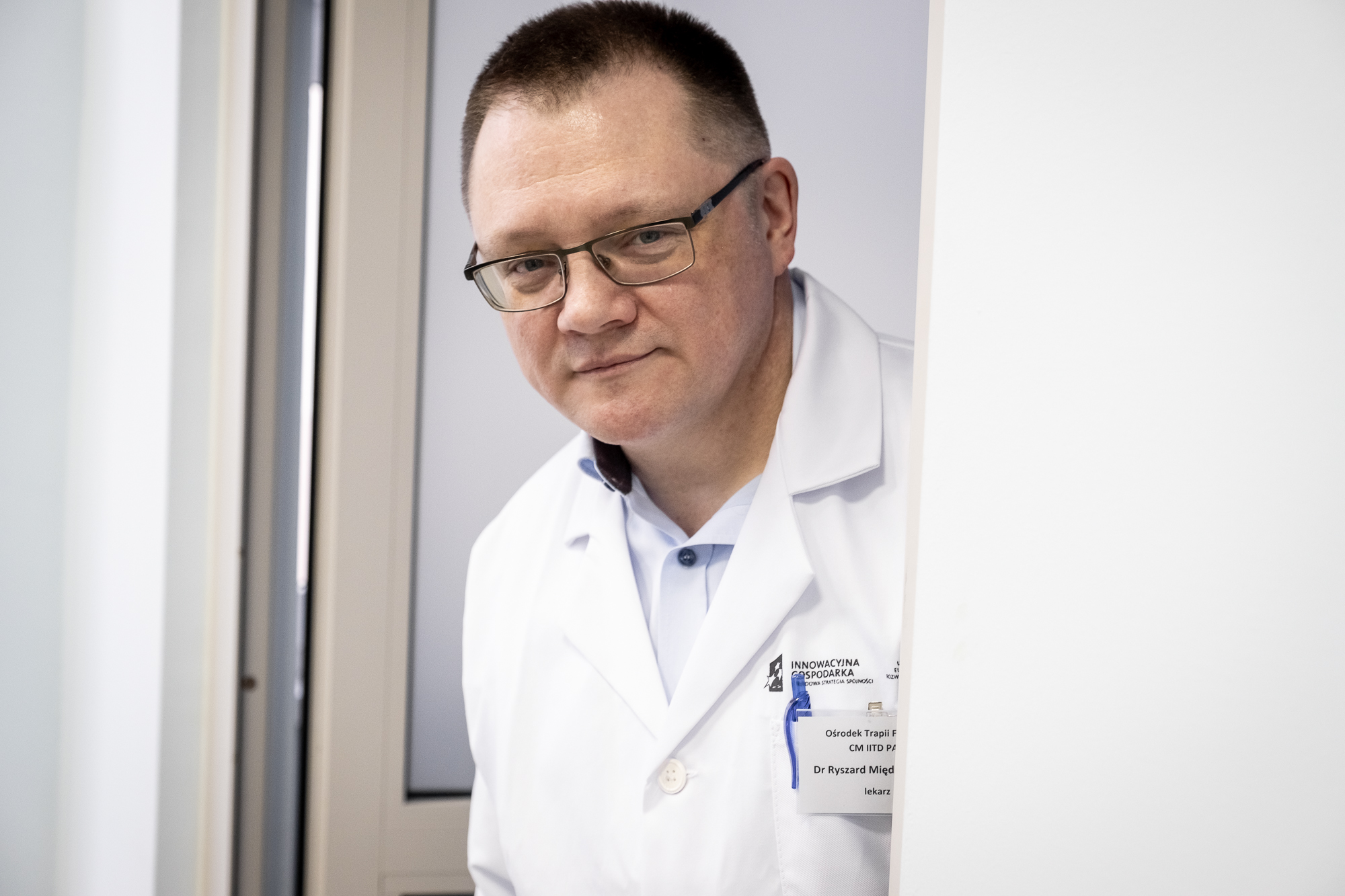 “This is an experimental therapy. We don’t have indisputable scientific proof that it will work,” says Doctor Ryszard Międzybrodzki.Kalbar/TFN

Since the therapy is experimental and not yet officially approved by European law for common use, the requirements are very strict. So far, they have only admitted 700 patients.

Doctor Ryszard Międzybrodzki is one of the physicians working with patients from all over the world who come to the Institute. The doctor stressed: “This is an experimental therapy. We don’t have indisputable scientific proof that it will work.

“Our group of patients are in a difficult situation because they aren’t people who are suffering from the infection for the first time and decide to use phages instead of antibiotics.” 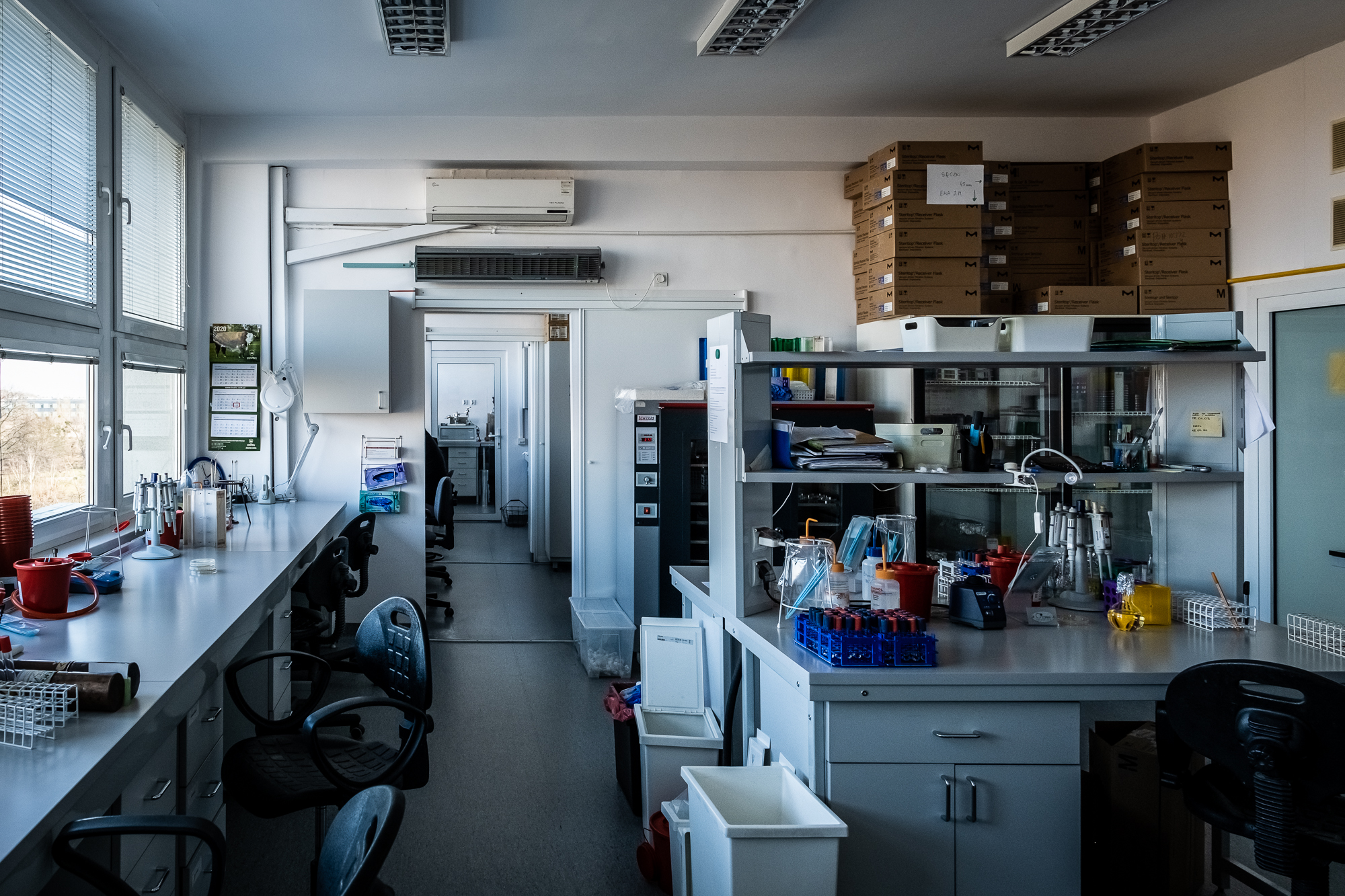 The future of the clinic remains uncertain.Kalbar/TFN

According to Polish and European law, as well as medical ethics, to attempt the therapy, doctors have to be convinced the therapy has a chance to work. During the qualification process, they carry out an extensive examination of the strains of viruses and bacteria the patient is carrying, to know what they are dealing with.

“After qualifying, the most important factors are to grow the patient’s bacteria, check if the laboratory has the corresponding bacteriophages, and prepare the phage compound. And after that we can start the therapy,” explained Doctor Międzybrodzki.

The patients suffer from a variety of infections – respiratory, urinary, genital, infected wounds – so the compound is always directly applied where it’s needed and sometimes it can be swallowed. After a while the patients' microbiology is examined once again, to find out which strains were eliminated and which reproduced. 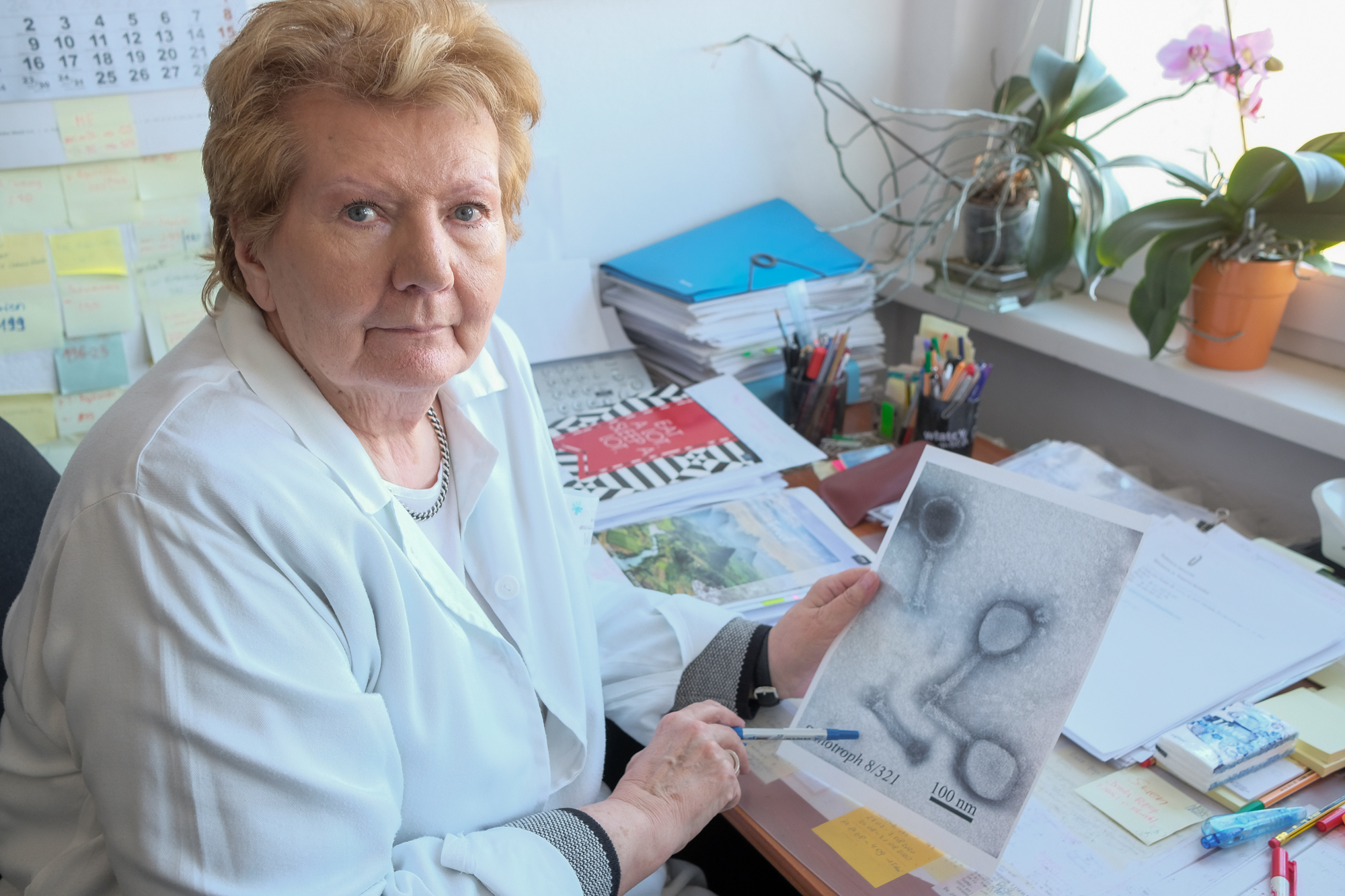 Doctor Beata Weber-Dąbrowska, the principal specialist at the institute’s laboratory.Kalbar/TFN

As such, the treatment is always individually prepared for each case. To reinforce the cure, it is sometimes combined with antibiotics.

Anna Kabała from Wrocław is one of the institute’s patients. Ten years ago, when pregnant, she contracted the E.coli bacteria. “During these 10 years, I've exhausted all possibilities of regular treatment. I was sent from doctor to doctor, at first unaware of how serious the infection was. After years of intensive antibiotic therapy, the options for administering antibiotics in hospitals and elsewhere ended.”

For 10 years Anna had to deal with the pain in the urinary tract and even kidney infection. The long-term illness had a severe impact on her daily life. She even had strange reactions from the people around her, who would be afraid to shake her hand, even though they couldn't contract the infection from her. 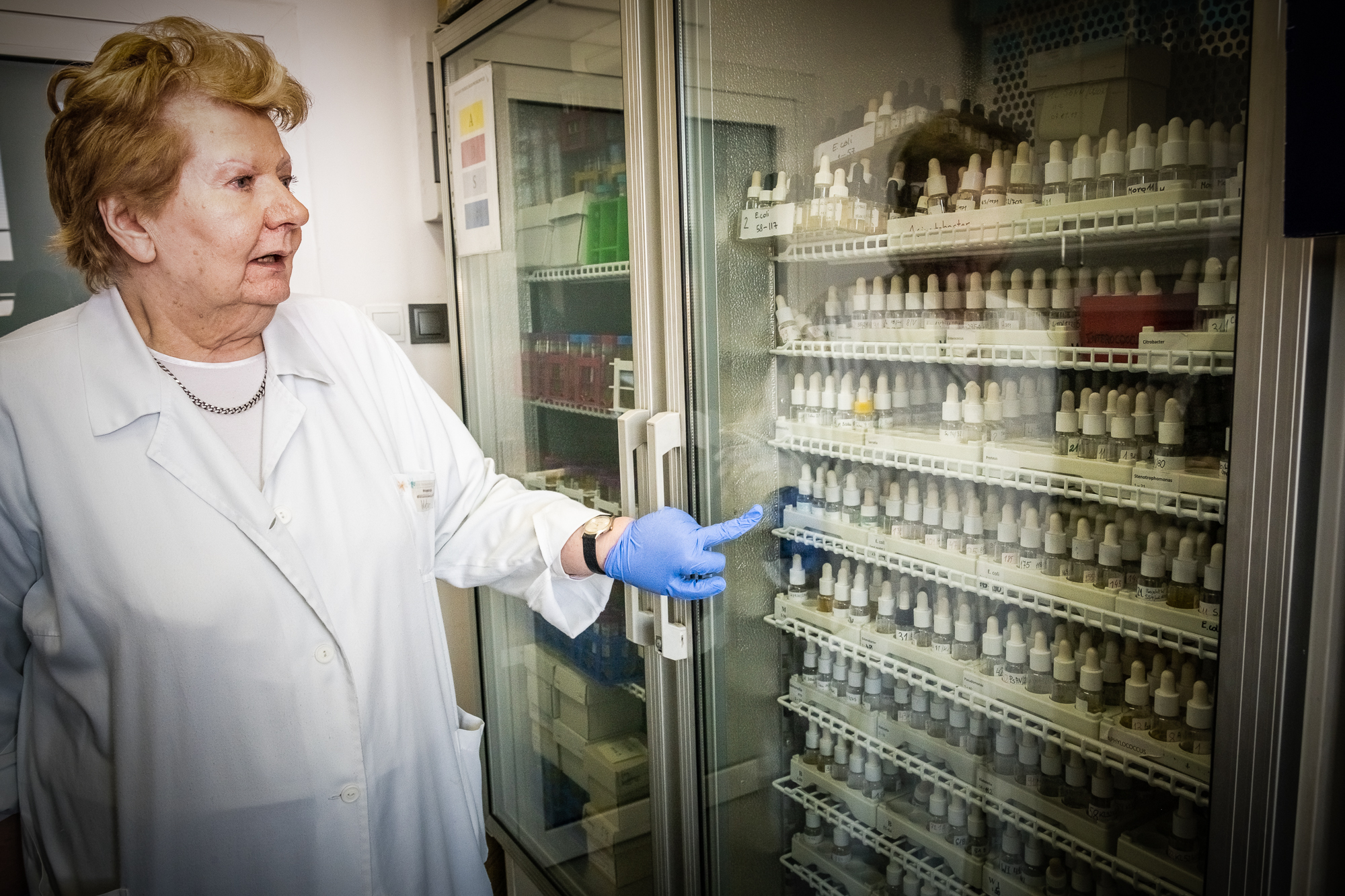 We carry phages in our bodies says Doctor Beata Weber-Dąbrowska.Kalbar/TFN

Now, after year and a half of therapy, Anna is feeling much better, and most importantly, the painful symptoms of her illness are gone.

“I regret I didn’t come here earlier,” Anna said. “There are great professionals here, specialists in very difficult cases. Thanks to them, I got my life back.”

More and more patients have been healed thanks to the phage therapy and two branches of the unit opened in Kraków and Czestochowa, but its future remains uncertain. Without a proper clinical trial, it remains a therapeutic experiment and cannot be used as a fully-fledged alternative to antibiotics. 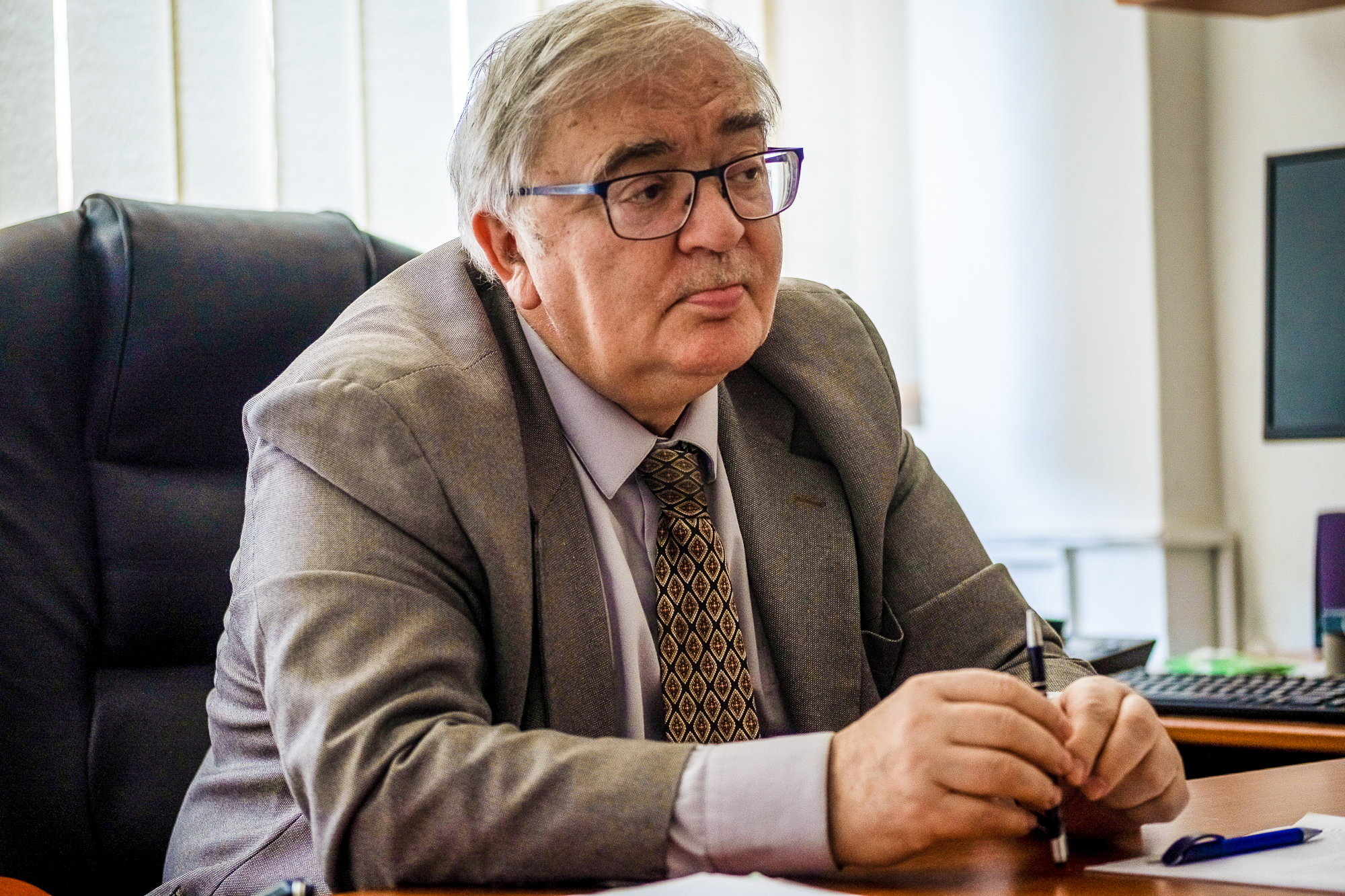 “Everything is very promising, but it's not proof in the sense of science, according to legal and scientific standards,” states Professor Górski.Kalbar/TFN

The institute’s resources, both in terms of finances and personnel, are meagre in comparison to the potential uses of their research, which could be far more than just therapy against bacteria.

“It's just a matter of a lack of resources. The clinical trial would allow the registration of the experimental therapy for general use,” stated Professor Górski.

“The bottom line is that it has great potential. We don't know yet if the phages will break through as a therapy for drug-resistant bacterial infections. It's not clear right now. Everything is very promising, but it's not proof in the sense of science, according to legal and scientific standards.”