The oldest competitive tennis player in the world has celebrated his 98th birthday in Lublin after escaping the war-torn city of Kharkiv.

Initially refusing to leave following Russia’s invasion, Leonid Stanislavskyi had defied the call of his friends and family because of his love for his homeland. 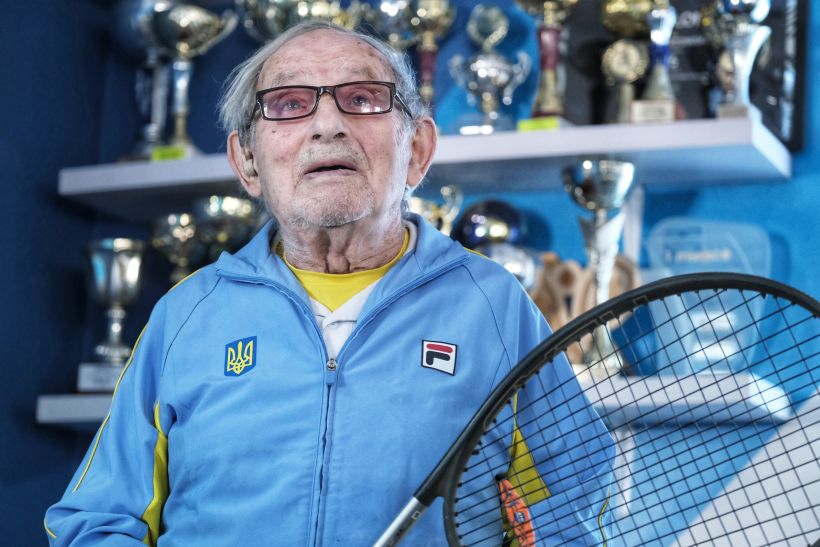 Only starting competitive playing at the age of 90, Stanislavskyi has since appeared regularly in international senior championships including competing at the ITF Super Seniors World Individual Championships in Spain at the end of last year.Kalbar/TFN

But after Russian troops began their bombing campaign, Stanislavskyi was forced to stop playing at his favourite Unicourt Tennis Club and changed his mind.

One of those pleading with him to leave was friend Dan Lobb, a broadcaster and producer from Surrey in the UK. 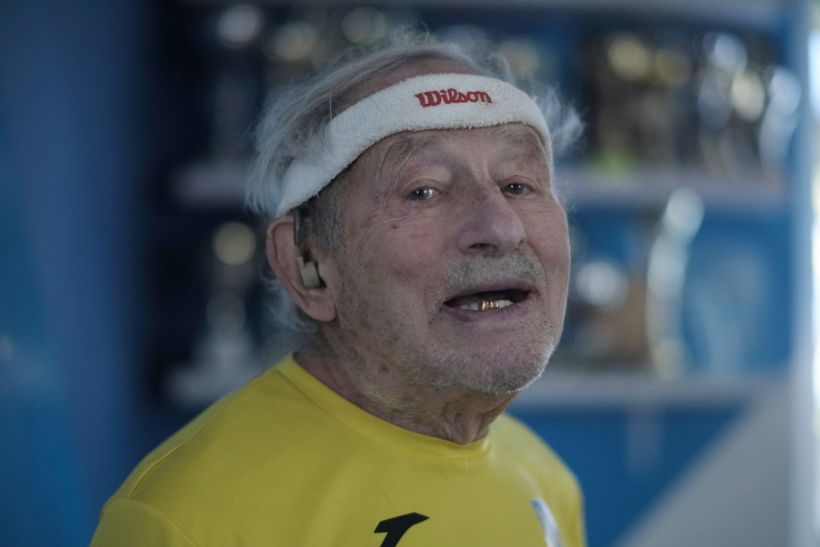 After initially refusing to leave his home in Kharkiv, Leonid Stanislavskyi reluctantly changed his mind after Russian bombing forced him to stop playing and he embarked upon his journey to Poland.Kalbar/TFN

Lobb told TFN: “I was aware of what was happening in Ukraine and I was in communication with him.

“Initially he was adamant he would stay in Kharkiv, but the situation deteriorated and a lot of his support network left, which meant he wouldn’t be so well supported there anymore, so me and a lot of other people around him were urging him to leave, and, eventually he was persuaded to make that decision, he decided basically overnight."

Coordinating Stanislavskyi’s escape with his friends and family, Lobb caught a plane to Rzeszów and drove to the Ukrainian-Slovakian border where the two met up in the village of Slemence. 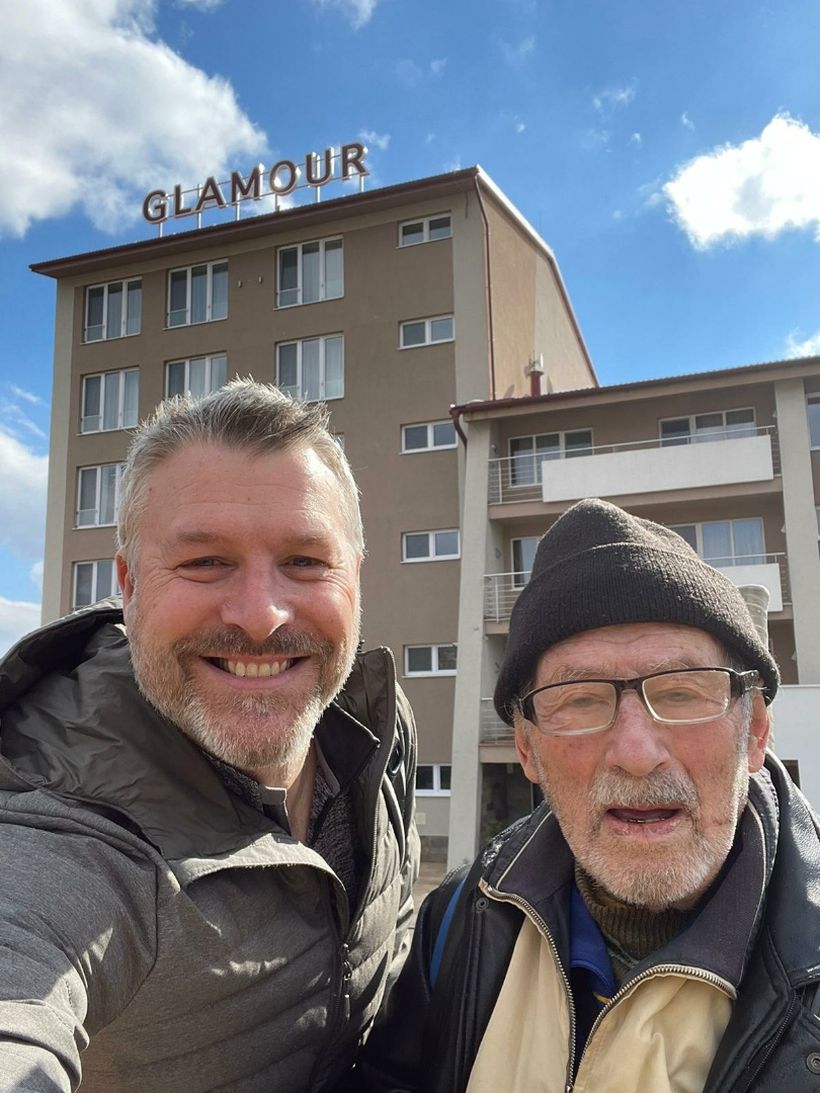 One of those pleading with him to leave was friend Dan Lobb (left), a broadcaster and producer from Surrey in the UK.Dan Lobb

Picking up an elderly lady also looking to get to Poland, Lobb booked them all into a hotel before setting off on the six-hour journey to Lublin where Stanislavskyi’s daughter was staying in their family apartment.

Lobb said: “When we met at the border, Leonid had just undertaken a gruelling 3 day car journey from Kharkiv. His incredible neighbour Alexei drove him all the way and looked after him; he is doing that journey every week, helping local people.

"I then took over and drove Leonid to Lublin. When we arrived I was amazed by Leonid’s desire to immediately go sight-seeing rather than taking a rest.

“I can’t emphasize enough how remarkable Leonid is in every way.” 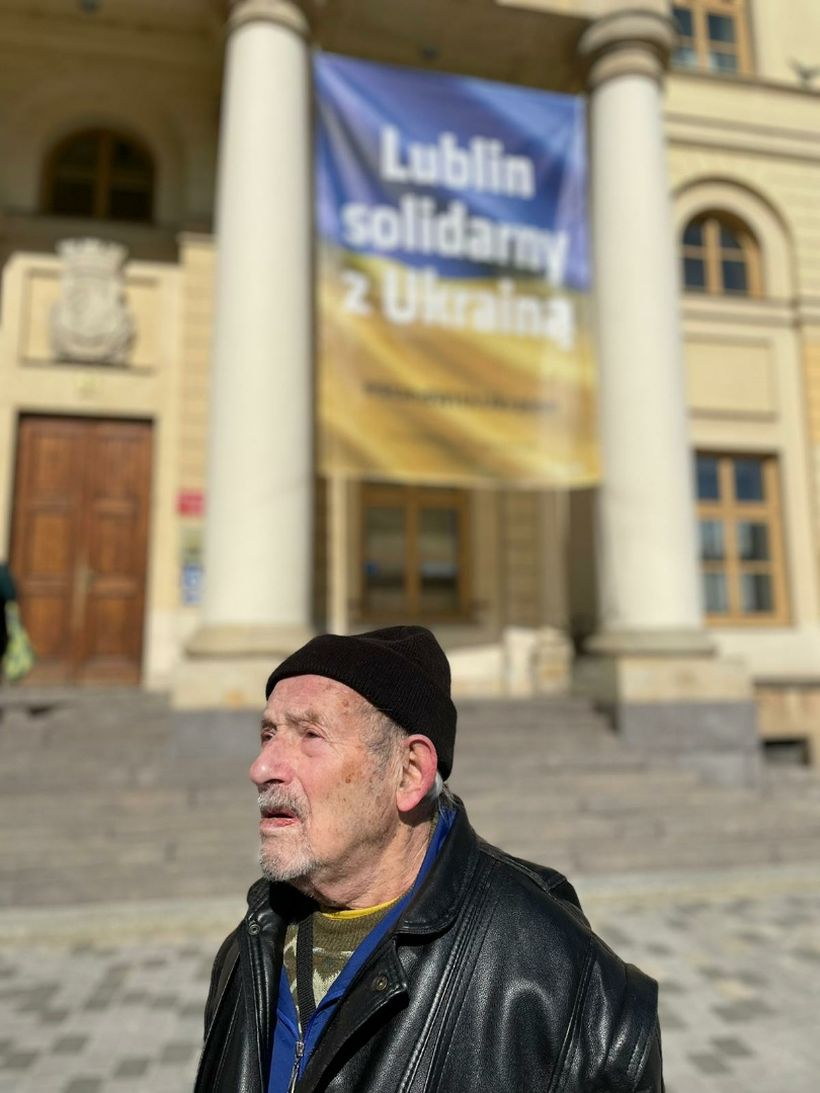 After picking Stanislavskyi up at the border in Slovakia and driving six hours to Lublin, Lobb said he was “amazed by Leonid’s desire to immediately go sight-seeing rather than taking a rest.”Dan Lobb

Keenly aware of Stanislavskyi’s desire to get back on the court, Lobb approached the Lublin Tennis Club.

Club owner Marek Oratowski told TFN: “We were all pretty surprised at first after receiving a request from Dan Lobb to organise sessions for Leonid. 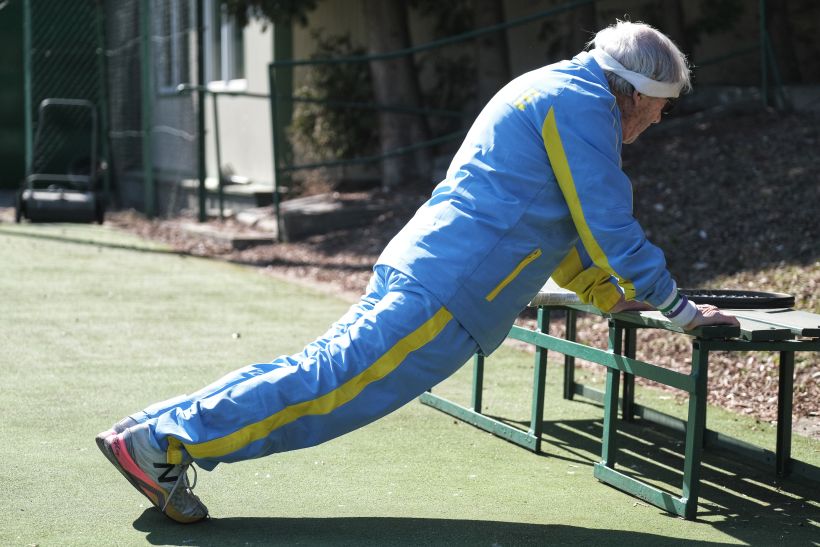 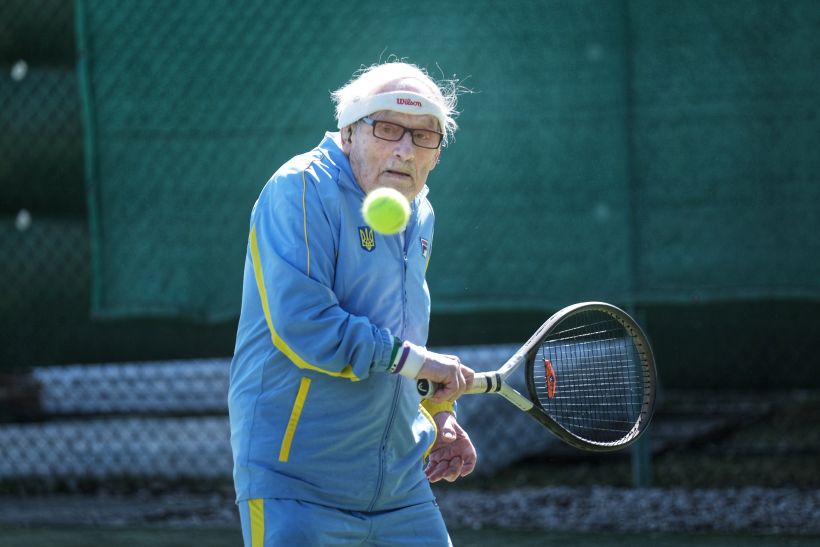 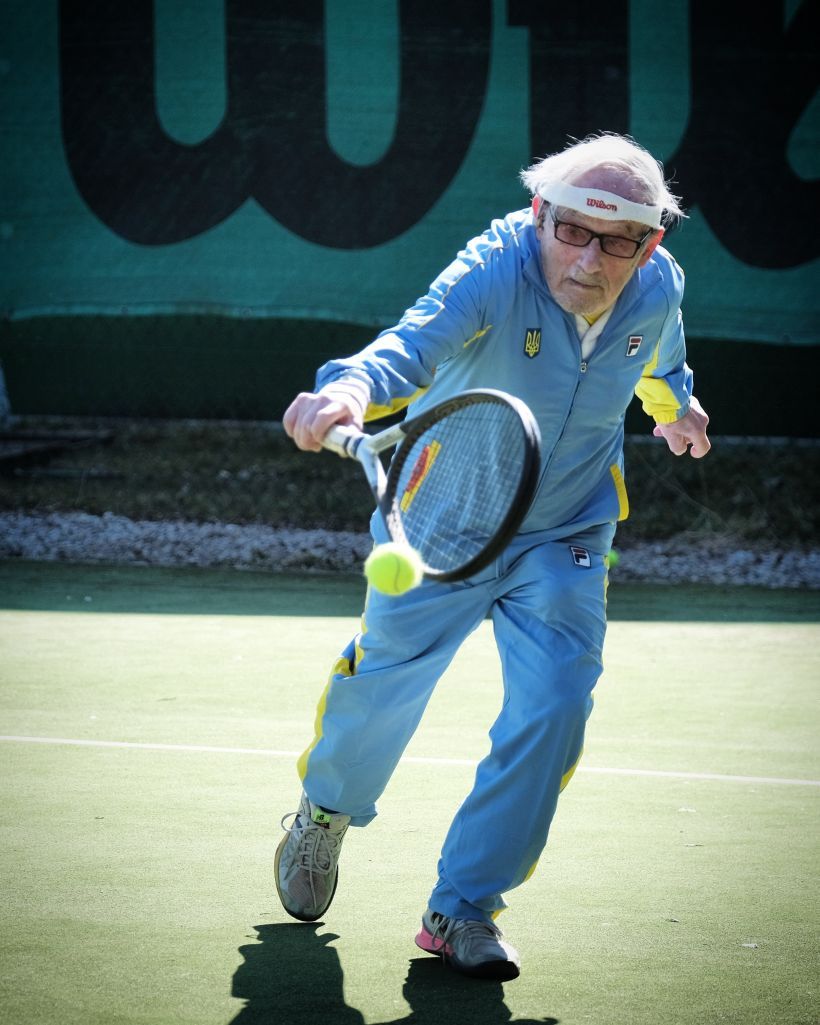 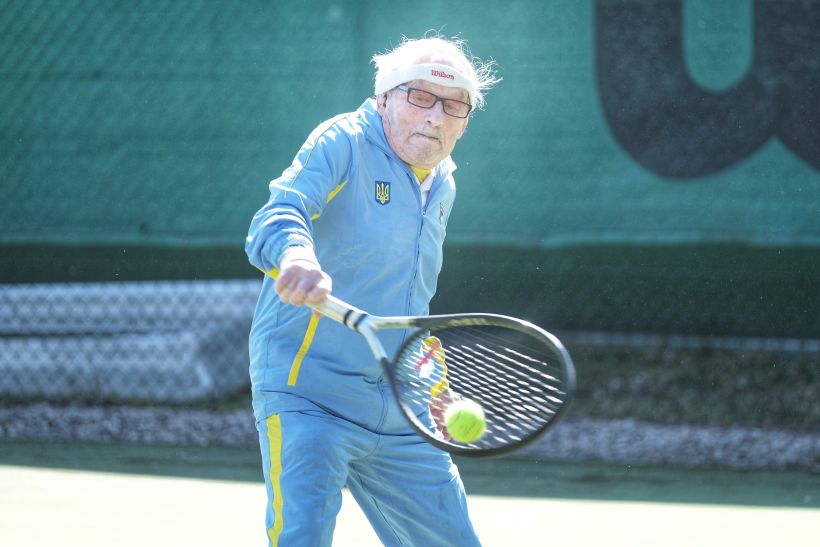 After completing a warm up consisting of squats, stretches and press ups against the courtside bench, Stanislavskyi took to the Lublin Tennis Club’s outdoor court to play in the spring sunshine, fluidly striking the ball and keeping up a rally and not stopping to take water or sit down for the duration of the session.Kalbar/TFN

“It definitely doesn’t happen every day that you have someone Leonid’s age still playing tennis and his story is amazing.

“We are already acting as a hub for Ukrainian tennis players who can’t play in their homeland and have four young players, two girls and two boys aged between 11-13 years old coming regularly, but something like this, is a very special case.

“I got in touch with a local over 70s tennis coach and he is now doing training sessions with Leonid. The plan is for him to come twice a week.” 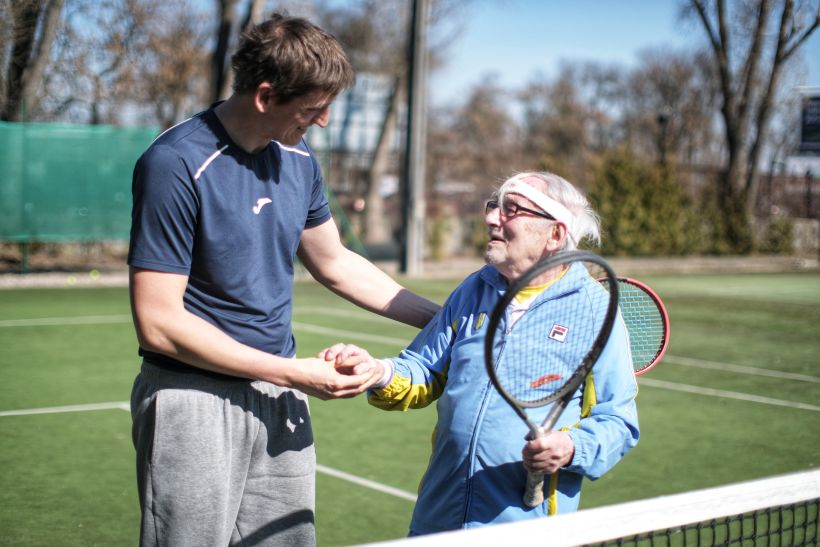 Stanislavskyi’s new coach said: “The only challenge will be to find him suitable players he can play against who can hit the ball with a similar power to Leonid.” Pictured: Stanislavskyi with Lublin Tennis Club owner Marek Oratowski.Kalbar/TFN

Taking to the court on March 23, a day after turning 98, Stanislavskyi showed off his skills to an enthusiastic crowd before tucking in to a special birthday cake.

His new coach Andrzej Gdula from Fundacja Tenis dla Wszystkich (Tennis For All Foundation) told TFN: “At his first training session, he didn’t want to sit down for any extended period of time.

“He was on his legs throughout the hour and moving well. The only challenge will be to find him suitable players he can play against who can hit the ball with a similar power to Leonid.” 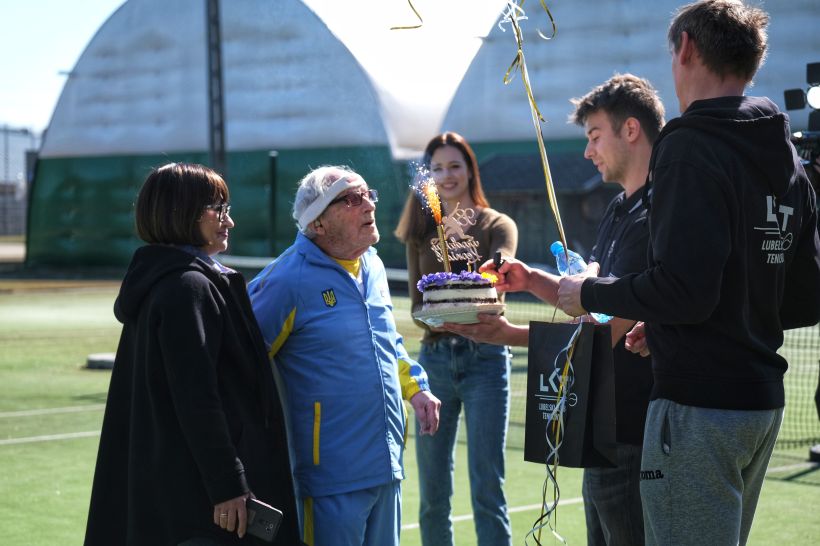 Stanislavskyi, pictured with his daughter and club members, says he now hopes to live to 100 and play with Roger Federer.Kalbar/TFN

A veteran of international championships for seniors, Stanislavskyi who has previously played with Rafael Nadal, says he now hopes to live to 100 and play with Roger Federer.

The 98-year-old who is officially recognised by Guinness Book of World Records for being the world’s oldest competitive player is also planning to appear at this year’s ITF Super-Senior’s World Individual Championships in Palm Beach Florida in the US, something Dan Lobb and Lublin Tennis Club are hoping to help facilitate for him.

Stanislavskyi told TFN: “I enjoy being in Lublin, I am a little bit sad of course [because I had to leave my home], but I am happy to be playing tennis again. Tennis is life and tennis is my life!”.