Łódź you believe it: Poland’s most off-the-wall city stuns the world with its outsized art

A dramatic story of boom to bust, there can be few European towns to have endured quite the same economic catastrophe as the city of Łódź. Born from the Industrial Revolution, what was once the beating heart of the Russian Empire’s manufacturing industry wobbled through many of Poland’s subsequent 20th Century trials only to fall at the very final hurdle.

The country’s political transformation of 1989 saw a program of de-industrialisation implemented that left the city bereft of direction. Factories closed, unemployment soared and the population plummeted.

Poverty became widespread. By the turn of the millennium, the situation was compounded by a series of grim events: a “cash for corpses” scandal affecting the local health service; a grisly “bodies in a barrel” murder investigation; ruthless battles between warring football gangs; and mafia rackets penetrating all levels of society. If there was bad news in Poland, it usually came from Łódź. With little exaggeration, this had become the epitome of “a fallen city”. 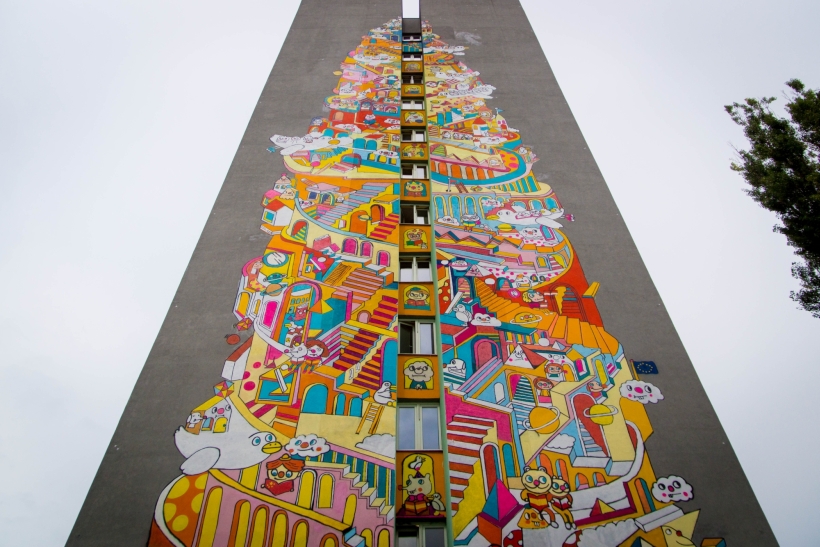 Tall order. One of the 80+ paintings that cover walls in the city.Urban Forms

Miraculously almost, the last decade has witnessed a dramatic turnaround that has seen the city emerge as a defiantly on-trend hub of entrepreneurial activity and artistic endeavour, not to mention becoming an unexpected epicentre of post-industrial, urban cool. In this, large format wall art has played a major role.

“Some years ago,” says Teresa Latuszewska-Syrda, “people saw this once great textile city as being ugly and dilapidated. The heritage of the past could be found in the city’s factories, tenements, villas and palaces, but these looked dead and overwhelming with their bare, blank walls. There was a feeling that nothing could be done about it.”

Despite the bleakness of the landscape, there was also a glimmer of hope. “Simultaneously,” continues Teresa, “I realized that while Łódź was neglected, it was still alive, and that’s why I created the Urban Forms gallery of large format murals.” 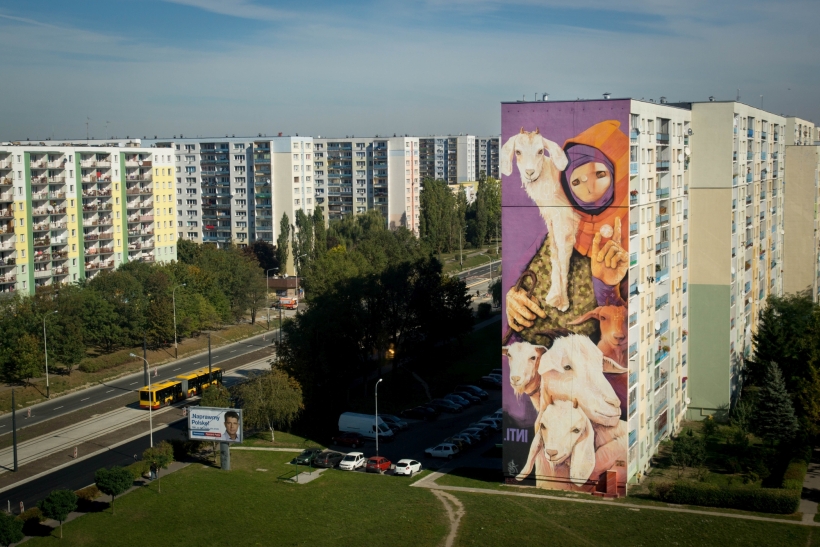 “There is no limit to what we can achieve,” she says.Urban Forms

Already heavily connected to the alternative scene through her work as a promoter and events organiser, for Teresa 2008 was the year that everything changed. It was then that London’s Tate Modern commissioned six international street artists to paint the facades of the gallery in the British capital’s first public exhibition of this misunderstood genre. It was to prove a lightbulb moment. “I realized that while the exhibition in London was temporary,” says Teresa, “we could do something similar in Łódź that would be altogether more permanent.”

The same year, Teresa created Outline (rechristened the Urban Forms Foundation in 2010), an NGO launched with the primary aims of beautifying the city, enabling the public unlimited access to art and revitalising Łódź through the medium of art.

“One of the inspirations for this outdoor gallery was the specific character of Łódź,” says Teresa “The project met the needs of a city desperately in search of change and development – Łódź needed this intervention.” Conveniently, it was also a city well-suited to such a plan. “The empty walls of the old tenements that are so characteristic of the city were the perfect canvas for large format paintings,” she continued.

Authored by an assortment of internationally acclaimed artists and talented debutantes, over 80 murals have since been unveiled, the majority being painted during the annual Urban Forms Festival held each summer. Introducing big bangs of colour to the underlying greyness, the XXL wall art has helped revive a city wrestling with the loss of identity that came with the collapse of the textile industry.

In some ways, the “muralosis” that has struck Łódź can be interpreted as an organic continuation of a prior tradition. Under the communist system, the city – like other major urban centres – found many of its walls adorned with colossal advertisements for state-run firms. Some have survived, albeit in faded form, as a ghostly reminder of a failed ideology. Perhaps most conspicuous of these remaining old timers is an effort dating from 1987. Advertising PEWEX, a store that sold Western goods to the lucky few, its weathered form is juxtaposed brilliantly against the radiant glory of a mural depicting Rubinstein that was added nearby in 2014.

It’s by exploring such contrasts that the city’s wall art truly stands apart: frequently appearing amid anonymous panel blocks or derelict buildings, these works have galvanized the city, not to mention catapulted it into global conscious as “a city of murals” – since 2014, the Urban Forms Foundation have partnered with the Google Street Art Project. Today, wall art has become as inexorably associated with the town’s image as its revered film school.

For Teresa, though, the goals remain grounded. “There’s no limit to what we can achieve with street art,” she says, “but this foundation is small – my dreams are modest. I just want to have enough funding to put it on a strong footing that will allow us to be more active and make our achievements more visible.”

Internationally acclaimed composer whose work was brought to a wider audience through film and television passed away in Kraków on Sunday at the age of 86.

Snapper creates amazing pics of ‘enchanting’ castle - but what is the mystery surrounding it?