Women gather in Warsaw to discuss their role in NATO

What is the role of women in international security, in NATO and more generally?

This broad question was the focus of the #WomenAreNATO conference organised by the Visegrad Insight journal held at the American Center Warsaw on 25 January.

Supporting security, NATO is committed to gender equality. This includes recognising the impact of conflict on women while protecting them from sexual violence and involving them in conflict prevention.

The Alliance seeks to include gender perspectives in its work and involve women in decision-making.

“To us security is about more than the military. It is also about values, freedom of speech, gender equality and prosperity,” said Magda Jakubowska, vice-president of the Warsaw-based Res Publica Foundation, which publishes Visegrad Insight.

In this context, Visegrad Insight launched its #WomenAreNATO initiative, which aims to develop women leaders’ voices and a network women experts in Central and Eastern Europe. Its audience is women in the region, including students, academics and policy-makers.

The event in Warsaw brought together these strands with insights from women diplomats and experts working in security, both in NATO countries like Canada and Hungary and in nearby countries like Ukraine and Georgia, which have fought off Russian aggression in the past decade. 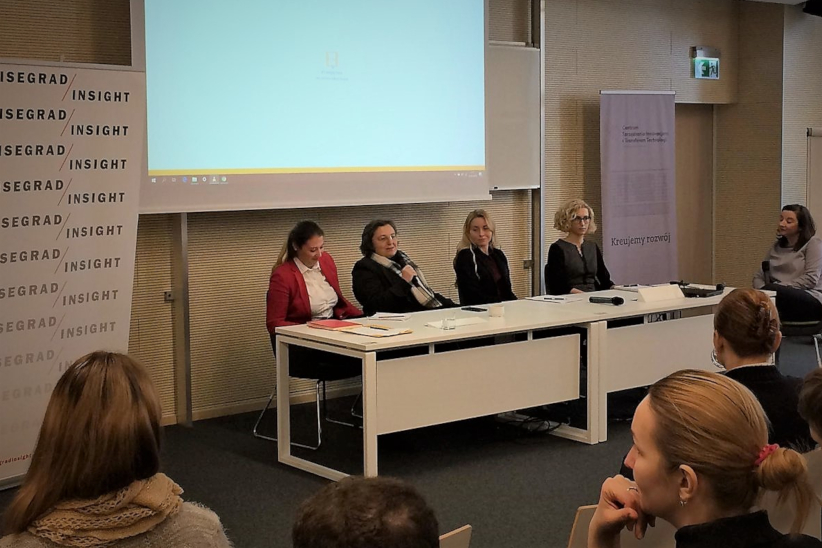 The initiative discussed the role of women in the organisation and in international security. Visegrad Insight/Twitter

A Ukrainian perspective on women and security was provided in the opening speech by Olena Suslova, chairperson of the board of directors at the Women’s Information Consultative Center in Ukraine.

After that, Canadian Ambassador to Poland Leslie Scanlan discussed women in NATO in the context of the “feminist foreign policy” embraced by Justin Trudeau’s government.

This includes “recognising that sustainable peace is only possible when women are fully involved in the resolution of conflict, as well as in other peace and security efforts,” according to the Government of Canada’s website.

In the Canadian Armed Forces, women and men are selected for jobs in exactly the same way, based on their rank, qualifications and merit, the Ambassador noted.

She and Hungarian Ambassador Orsolya Kovacs also discussed how a public career, such as diplomacy, can be combined with family responsibilities like being a parent.

A televised speech by the NATO Secretary General’s Special Representative for Women, Peace and Security Clare Hutchinson was followed by two panels with only women panellists; one on challenges for NATO after the Brussels Summit and another on NATO-Russia relations, with perspectives from Ukraine and Georgia.