Will Poland be ready for the World Cup after a draw with Chile?

Just one last friendly game awaits the Polish National Football Team before they depart for Sochi and the FIFA 2018 World Cup in Russia. On June 12th, they will face Lithuania in Warsaw, before flying east the day after. The friendly match with Chile, held yesterday in Poznań, ended with an unsatisfying 2:2 draw.

As expected, the Polish team was better on the offensive, with Robert Lewandowski and Piotr Zieliński scoring in the first half. What is worrying, are the mistakes done by defenders, which led to goals by the Chilean side. There is still time before the beginning of the World Cup and manager Adam Nawałka will have to use it wisely.

“We are all thinking about the first game. We waited about 9 months for it. There are just two weeks left and we can’t wait for the first whistle. Still, each one of us approaches it with a cool head. Now is the time to prepare physically. The time for concentration will come several hours before the game,” said Wojciech Szczęsny, one of the three keepers hoping to appear between the goalposts during the World Cup.

Poland, ranked 8th in the world according to last week’s FIFA announcement, could be a major surprise during the tournament. Under the leadership of coach Adam Nawałka, who was responsible for Poland advancing to the quarter-finals of the 2016 European Championship, the Polish National Team has steadily developed with a mix of players from domestic and international clubs, as well as tactics focused on pressing, keeping possession of the ball and the 4-2-3-1 formation.

The official announcement of the squad, made during the training camp in Arłamów, a facility picturesquely located in the Bieszczady mountains confirmed this strategy. What came as a surprise was that only 4 players from the Polish league, Ekstraklasa, were chosen for the team.  Different approaches and better training regimes are thought to be some of the reasons.

“I spoke to the guys who recently transferred abroad. They all see the differences when it comes to training, what the coaches expect and what they notice. It’s not that we have bad players. We have players that weren’t properly directed (in their development),” reflected Robert Lewandowski, the captain and undisputed star of the team.

Lewandowski scored 16 goals in the 10 qualifying games, setting the record for the European charts. While media are fuelling rumours of him leaving Bayern Munich next season, during the Cup he will strive to prove that he is the best striker in the world.

Another forward to look out for, hoping to support Lewandowski, is Arkadiusz Milik. Having struggled with injuries for a big part of the season, during the last matches with hic club Napoli, he showed that he’s ready and willing to do more than expected of him.

Other key figures in the squad include goalkeepers Wojciech Szczęsny and Łukasz Fabiański. Their skills are considered comparable, they have experience in international clubs, Juventus and Swansea respectively. It will be fascinating to watch their rivalry for the first squad.

One more star and celebrity, Grzegorz Krychowiak, a defensive midfielder at Paris Saint-Germain, had a tumultuous season behind him. West Bromwich Albion, the club he was loaned to, was relegated from the Premier League. Krychowiak is playing not just to win. He hopes to prove his skills and return to PSG for the coming season.

“Coach Adam Nawałka has already chosen tried and experienced players. He observed them in sparrings, not only their condition, but if they are carrying out the strategy. Looking at our squad, we will have one of the oldest teams in the World Cup,” stated Piotr Mowlik, former National Team goalkeeper.

One player, who was thought to be a sure presence in the squad, is currently facing a nerve-wracking battle. Kamil Glik, middle defender at AS Monaco, sustained a shoulder injury during training. He was transported to Nice, to be examined by his club doctors.

Different interests of the National Team and AS Moncao are at stake. The club might prefer to proceed with surgery, which would exclude Glik from the World Cup, but ensure plenty of time for recovery. The Polish side would rather treat him with kinesio tape and injections, allowing him to play. The final decision will be made on Monday. 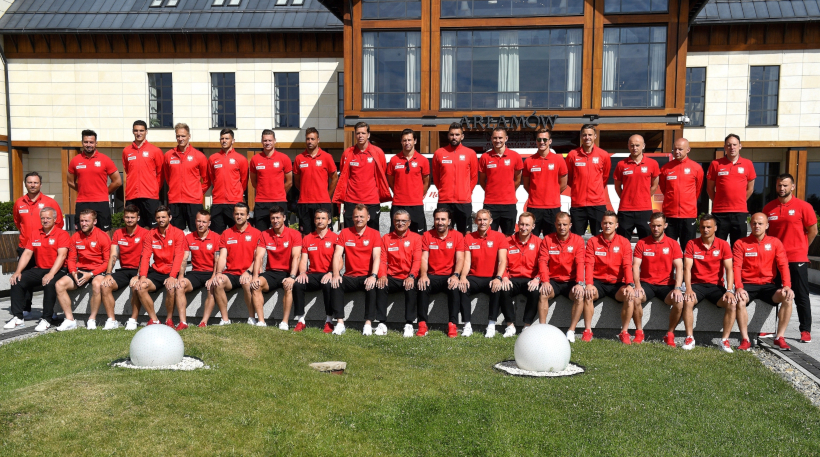 Poland will be one of the last teams to begin their World Cup campaign, facing Senegal on June 19th in Moscow. The other sides in group H are Colombia and Japan. While Poland is the highest ranked team, it can be sure to expect fierce opposition. The Samurai Blue are known for their determination and speed, while Senegal was indicated to win the group by Jose Mourinho. The clash with Colombia (ranked 16th) could turn into a spectacle with two world-class strikers, Lewandowski and James Rodrgiuez, striving to score.

“For most of us the World cup is a first, something we haven’t experienced. It makes our hunger for success and winning stronger. We advanced to the quarterfinals of the European Championship, but now we have different goals and ambitions. We will do everything to get the best out of it,” assures team captain, Robert Lewandowski.