In the unlikely event that you challenged me to name an inspirational bear then I’d most likely nominate one that’s made a meaningful impact on my life: Fozzie, Rupert, Yogi or Paddington.

But outside the realm of fiction, others, too, have influenced my lifestyle choices: take Wojtek, for instance, the booze guzzling, cig smoking bear that served alongside the Polish II Corps during the Second World War. 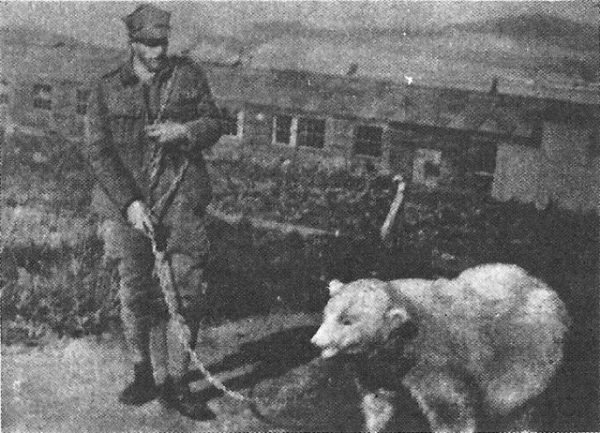 Baśka the polar bear was bought by Walenty Karaś, a young cadet officer in the Murmansk Battalion, to try and win over the heart of a local girl.Modlin fort

But whilst the story of Wojtek has been retold a jillion times over, lesser known is that of Baśka Murmańska, a polar bear that preceded Wojtek and did her bit for the Polish armed forces.

Yep, I’d never heard of her either, at least not until a fleeting daytrip took me to Modlin. 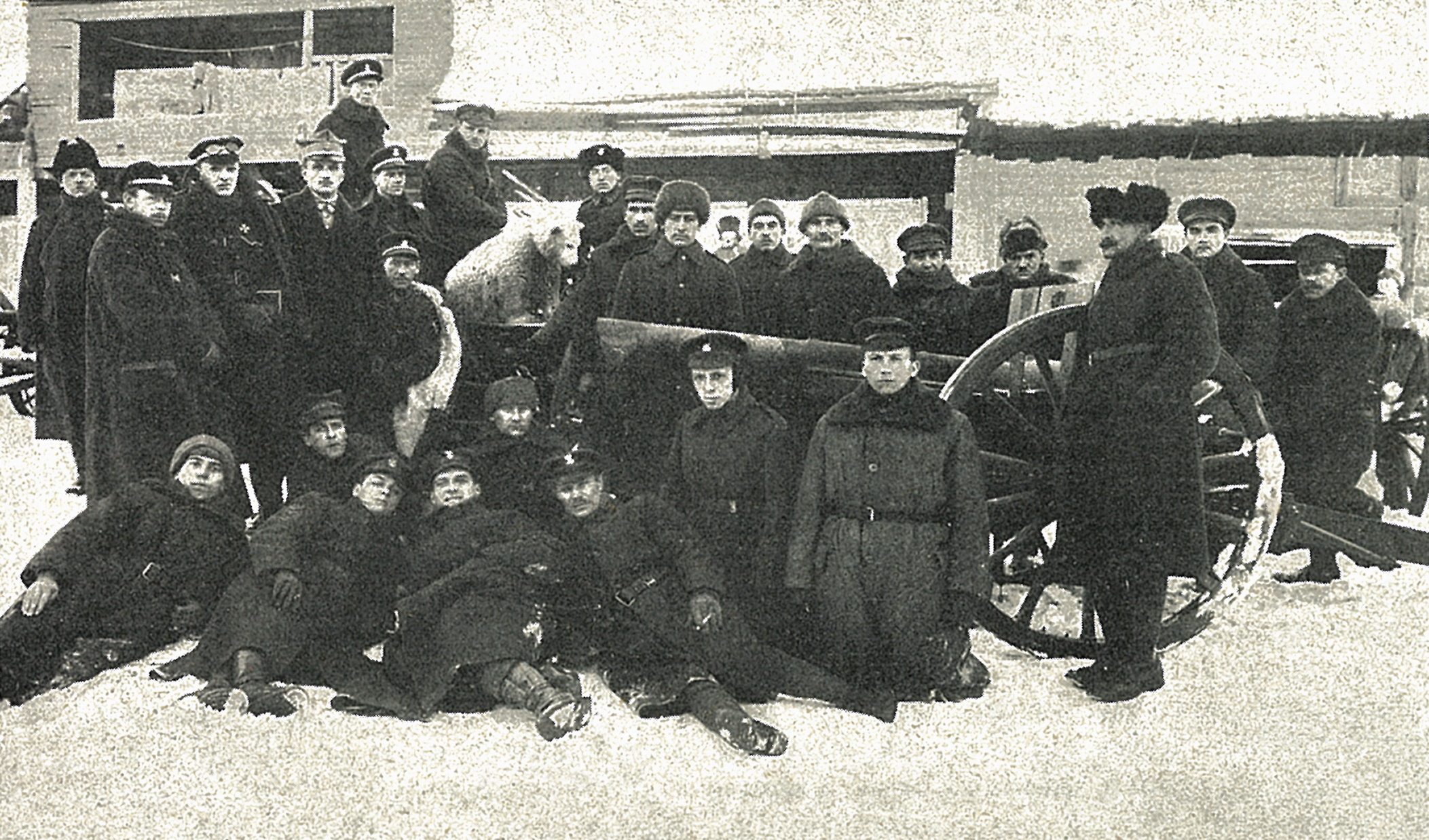 Baśka was quickly adopted as a mascot of the battalion.Modlin fort

Now if you’re anything like me (God forbid), then you’ll know Modlin as the seat of Poland’s glummest airport: a tinpot affair of snaking queues and mounting frustrations. Yet there’s also so much more, most prominently a fortress complex so immense that it’s said that were you to take it apart, brick-by-brick, the individual elements would stretch around the globe.

Walking around this 19th century military stronghold (Nowy Dwór Mazowiecki-Fortress Modlin, to give it it’s full name), one is left in no doubt as to the veracity of this claim, but it is not its sheer scale that leaves a lasting impression, rather the polar bear statuettes sprinkled about the grounds: they’re here to honour Baśka, for it’s here that she lived and here that she died. 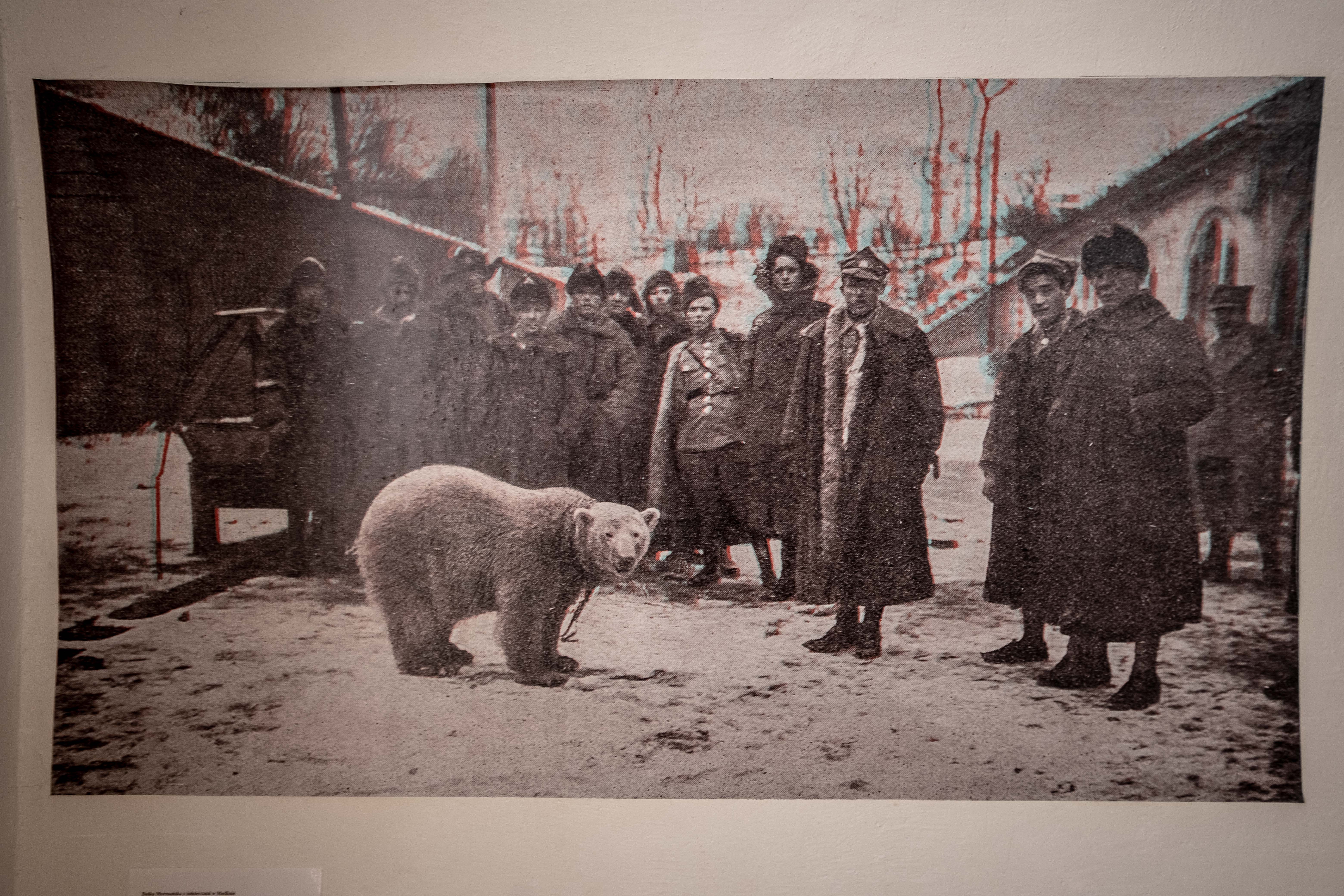 Baśka and the Polish Murmansk battalion were stationed on the frontline at Onega along the route of the recently built Murmansk-Archangelsk railway line.Kalbar/TFN

Of course, her story is a little more complex than that, and like all good wartime yarns it begins with a woman and a lovelorn soldier.

The year was 1919, and in order to save the remote Russian port of Archangelsk from the Bolshevik hordes a coalition force of allied nations was formed; among this multinational task force was Poland’s so-called Murmansk Battalion, a unit featuring a young cadet officer by the name of Walenty Karaś. 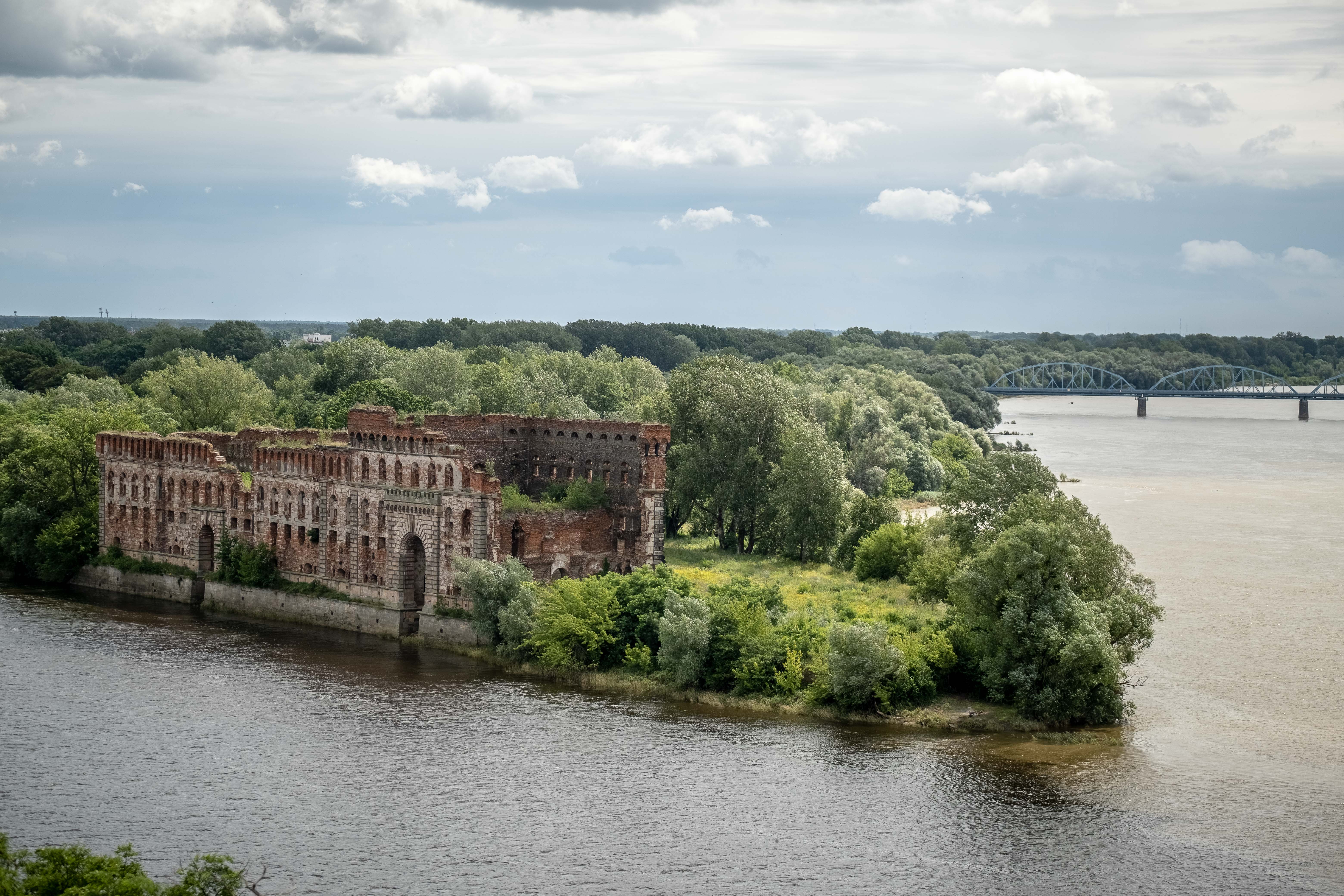 Upon their return to Poland, Baśka accompanied her unit to their barracks at the Modlin Fortress, 12km outside of Warsaw.Kalbar/TFN

Smitten by a local girl, the Pole found himself competing for her affections with a monocle-wearing, opera-singing Italian captain who wasn’t averse to strutting around town with an Arctic fox perched on his shoulder.

Seeking to outdo him, Karaś purchased a polar bear he’d spotted for sale at a market, only to find himself temporarily behind bars after his new pet was implicated in the death of Milord, a bulldog belonging to a stuffy English general. Seeking to rescue the bear from any recriminations, Karaś’s comrades inducted her into the battalion as the unit’s official mascot. 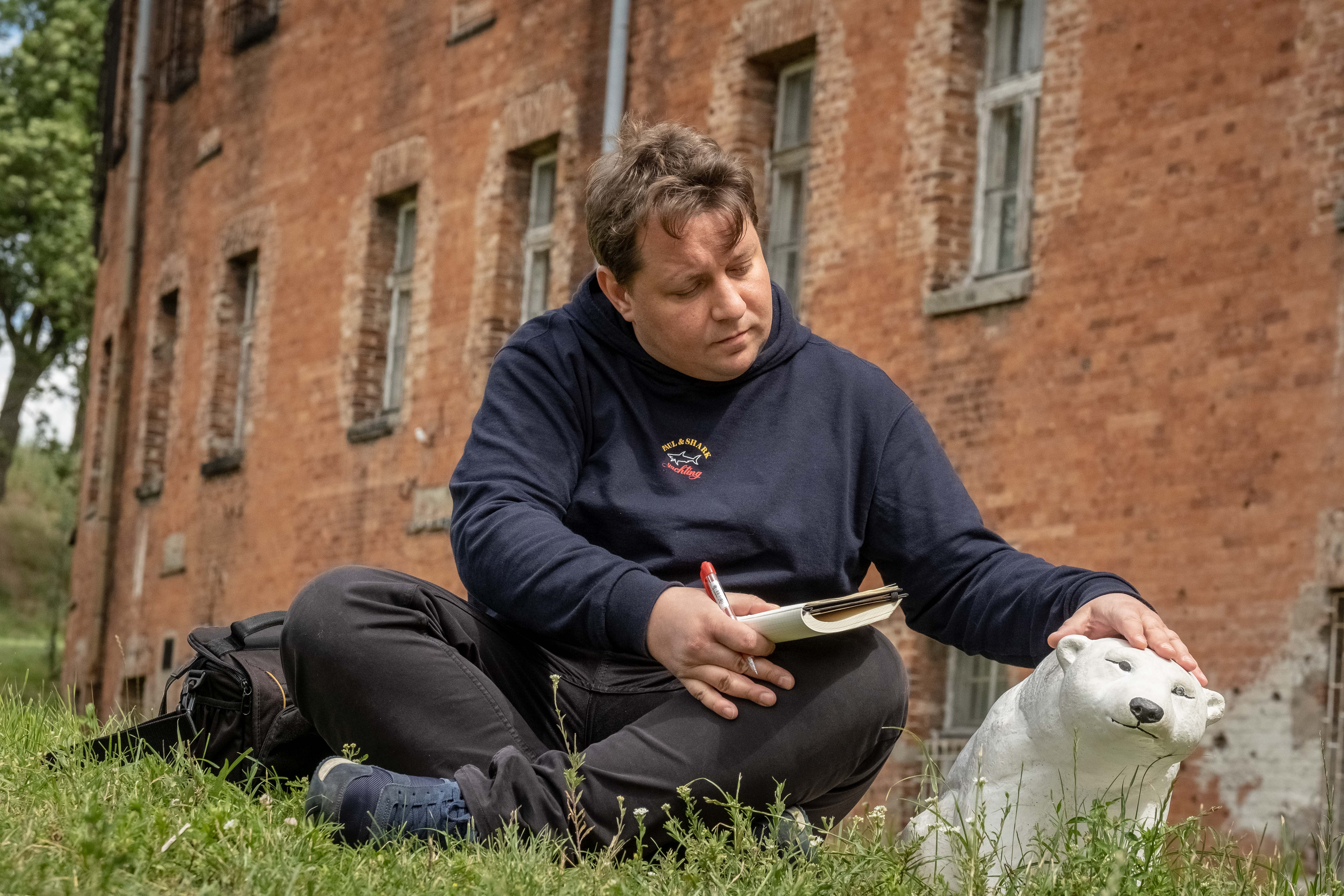 The 19th century military stronghold has statuettes of the polar bear sprinkled about the grounds.Kalbar/TFN

By all accounts the polar bear – by now named Baśka – became a highly-valued member of the regiment, often roaring along to their songs and marching alongside them after being mentored to do so by a certain Corporal Smorgoński. Later, when the contingent found itself in Gdańsk, Baśka further excelled after enthusiastically joining a late night bar room brawl that saw the Poles vanquishing a rowdy mob of German Grenzschutz guards.

But her finest moment was yet to come and arrived when she partook in a military parade held on Warsaw’s Saski Square (today, Pl. Piłsudskiego). Marching past Marshal Józef Piłsudski, the architect of the modern Polish state, she is said to have raised her paw in salute thereby delighting one of the country’s greatest ever heroes. 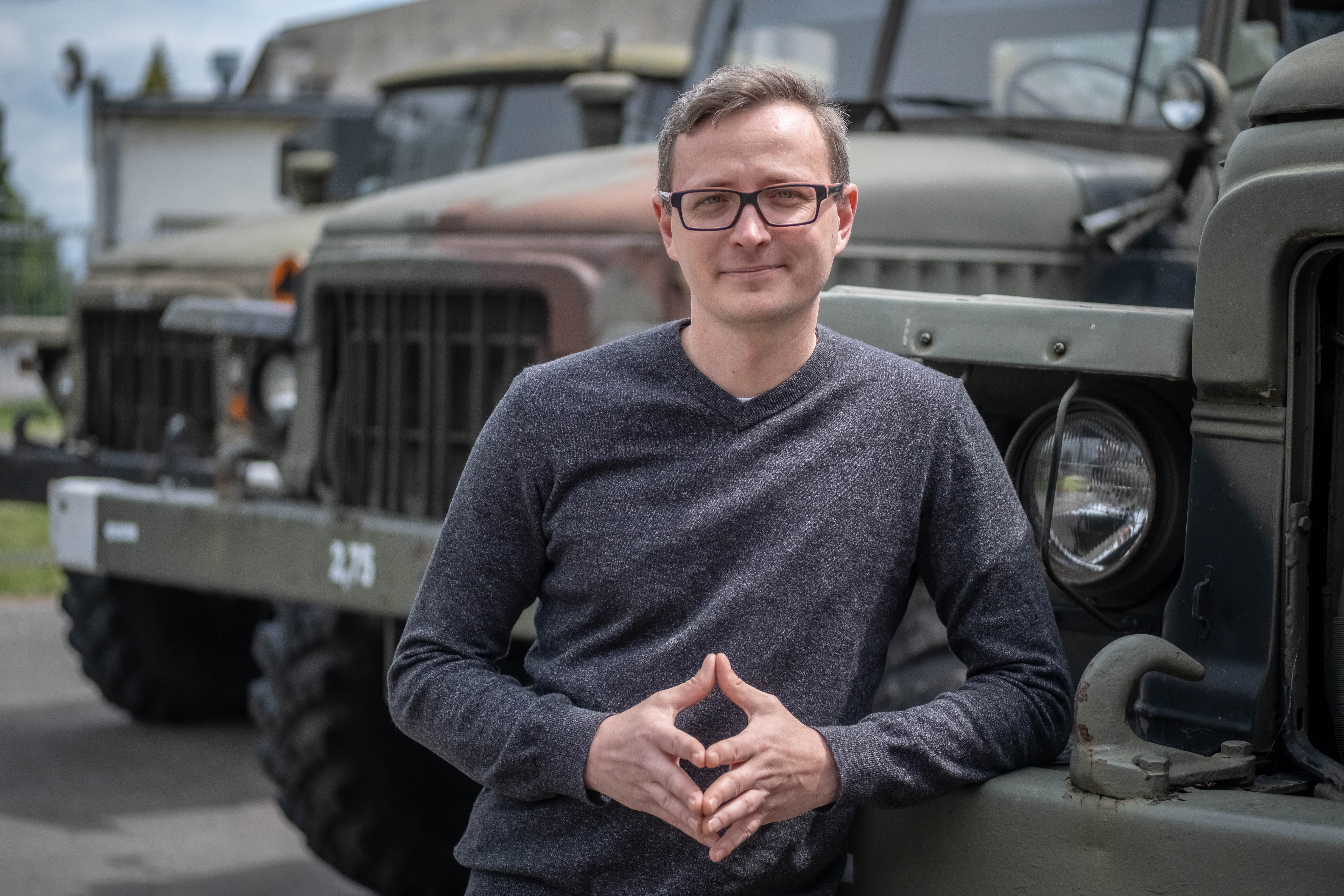 Christopher Kurzyński from Modlin fortress said Baśka’s story only became known seven years ago after the discovery of her being mentioned in forgotten journals.Kalbar/TFN

Ultimately, though, her end was ignominious. Stationed in Modlin, it became customary for Smorgoński to take her to the river to cool down. When one day she swam across to the other side she startled a group of peasants who reacted to the unexpected sight of a polar bear by pitchforking her to death. Subsequently skinned, her fur was hung in the National Museum (from which it mysteriously disappeared during WWII) while her carcass was buried in an unknown location – either Modlin’s military cemetery, or in the Orthodox graveyard just outside town.

Largely forgotten thereafter, her story is finally being told. 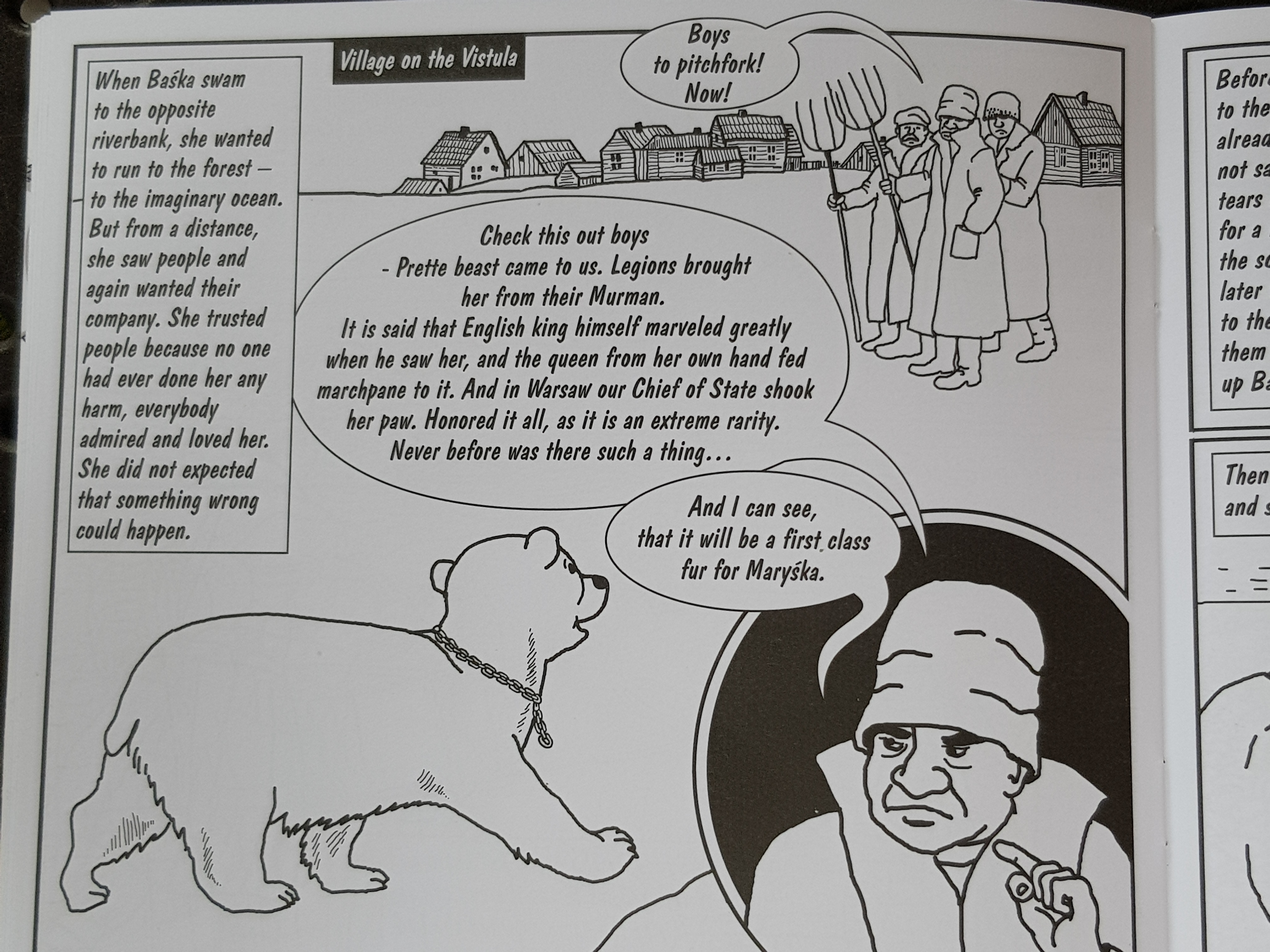 Baśka had an unfortunate end after she swam across the water surrounding the fort where she startled a group of peasants who reacted to the unexpected sight of a polar bear by pitchforking her to death.Kalbar/TFN

This becomes apparent speaking to Christopher Kurzyński, a registered member of the Local Tourist Organization of Three Rivers.

“We only really first found out about her seven or so years ago when Elżbieta Wiercińska, another guide working in Modlin, discovered Baśka mentioned in a military order,” he says. “While we were originally quite sceptical, we soon found other material confirming her existence such as archived press articles and photographs.” 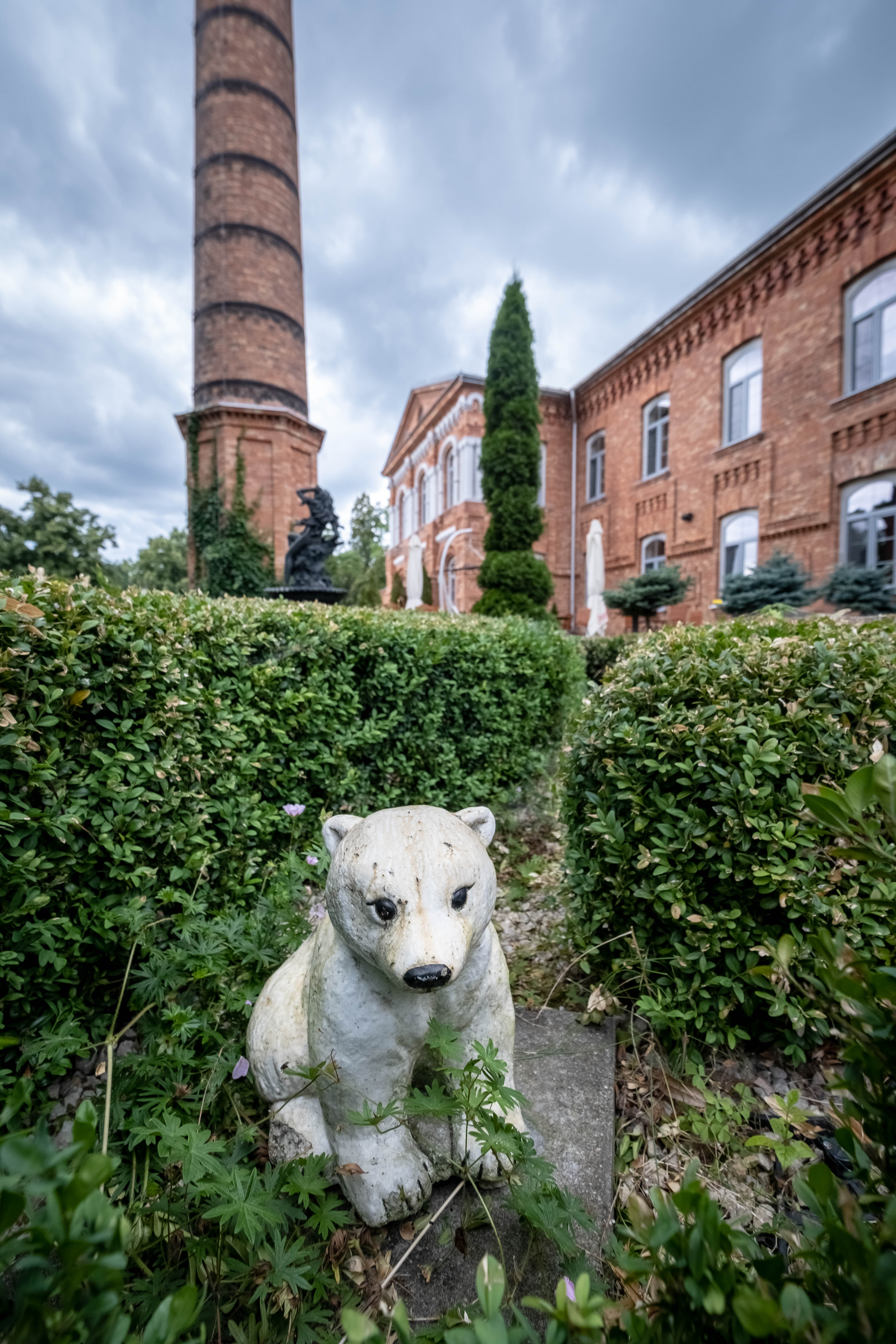 Today Baśka is installed as the fort’s official hero, with her spiritual presence looms heavily around the town.Kalbar/TFN

Other revelations have followed, among these the battalion’s two-week layover in Edinburgh, and taken as a whole all these bits and pieces have contributed to what Kurzyński describes as “the never-ending story of Modlin’s surprises”.

For her part, Baśka has helped reinvigorate the ailing fortress and broaden its appeal to not just a younger audience, but also to all those that value history’s more curious angle. 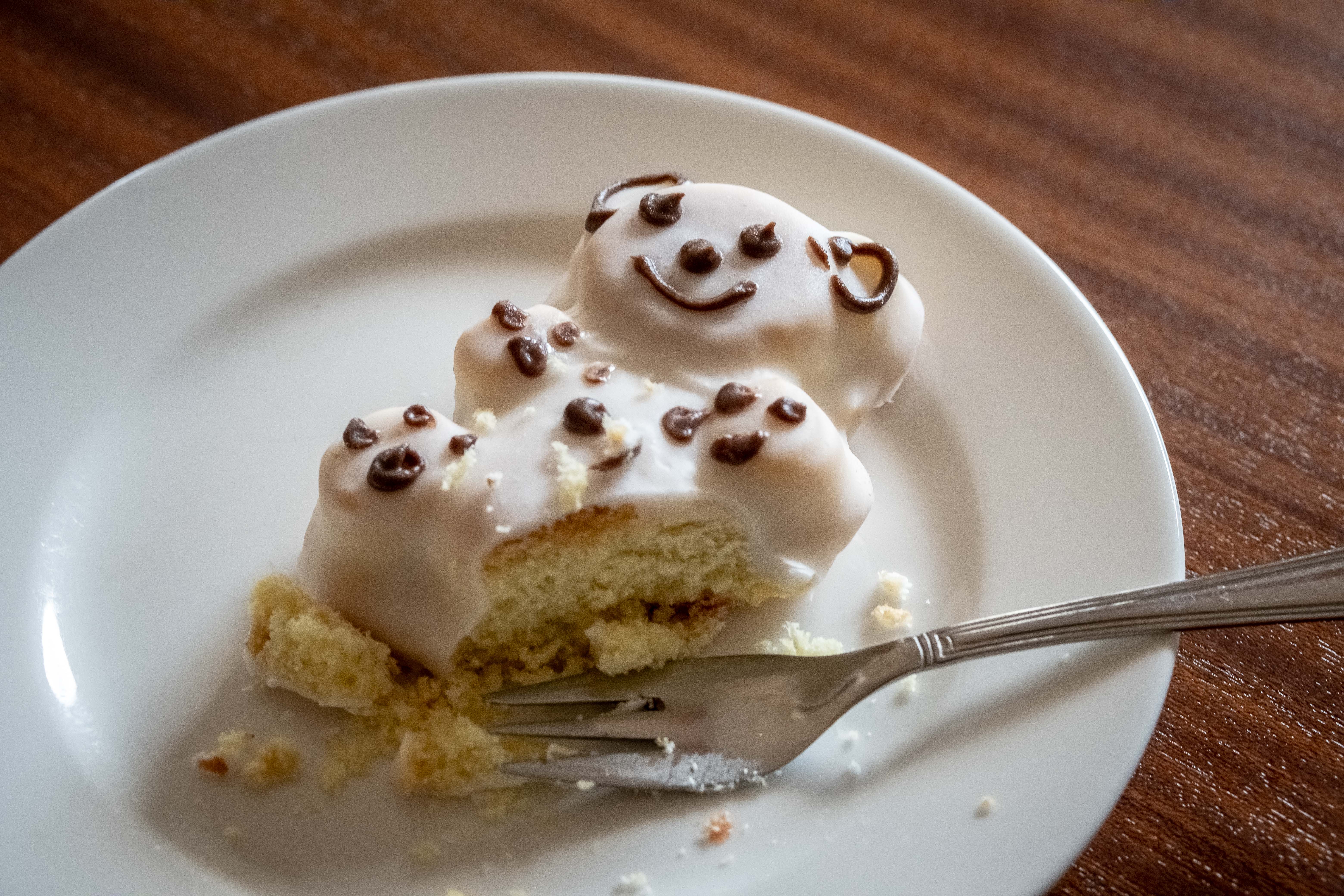 “We realized we could reach an entirely new target group,” says Kurzyński, “and as part of this we’ve come up with a Baśka trail along which you can hunt down little polar bear monuments.”

Weighing 30 kilos each, these rival Wrocław’s gnomes as Poland’s quirkiest miniatures and, like the gnomes, have also courted the attention of the nation’s kleptomaniacs. 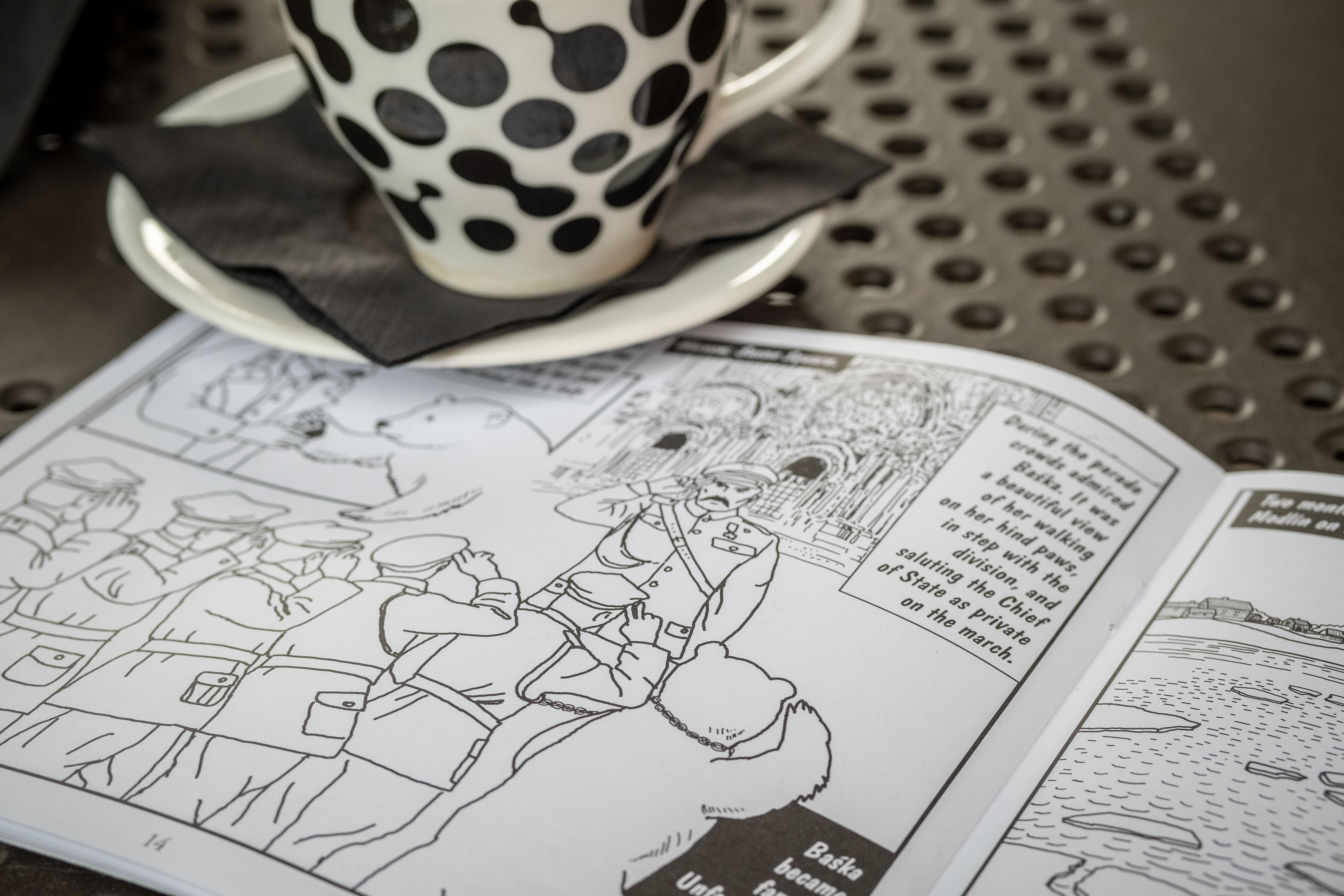 To keep the story of Baśka alive, Modlin not only has an array of polar bear gifts, but there’s also a comic book dedicated to her.Kalbar/TFN

“We had one stolen,” recalls Kurzyński, “but after we left ‘Missing’ posters around town it soon reappeared in its rightful place!”

Today installed as the fort’s official hero, Baśka’s spiritual presence looms heavily around town: in the gift store, t-shirts and mugs with her image abound; a children’s book has been published; and a street renamed in her honour. 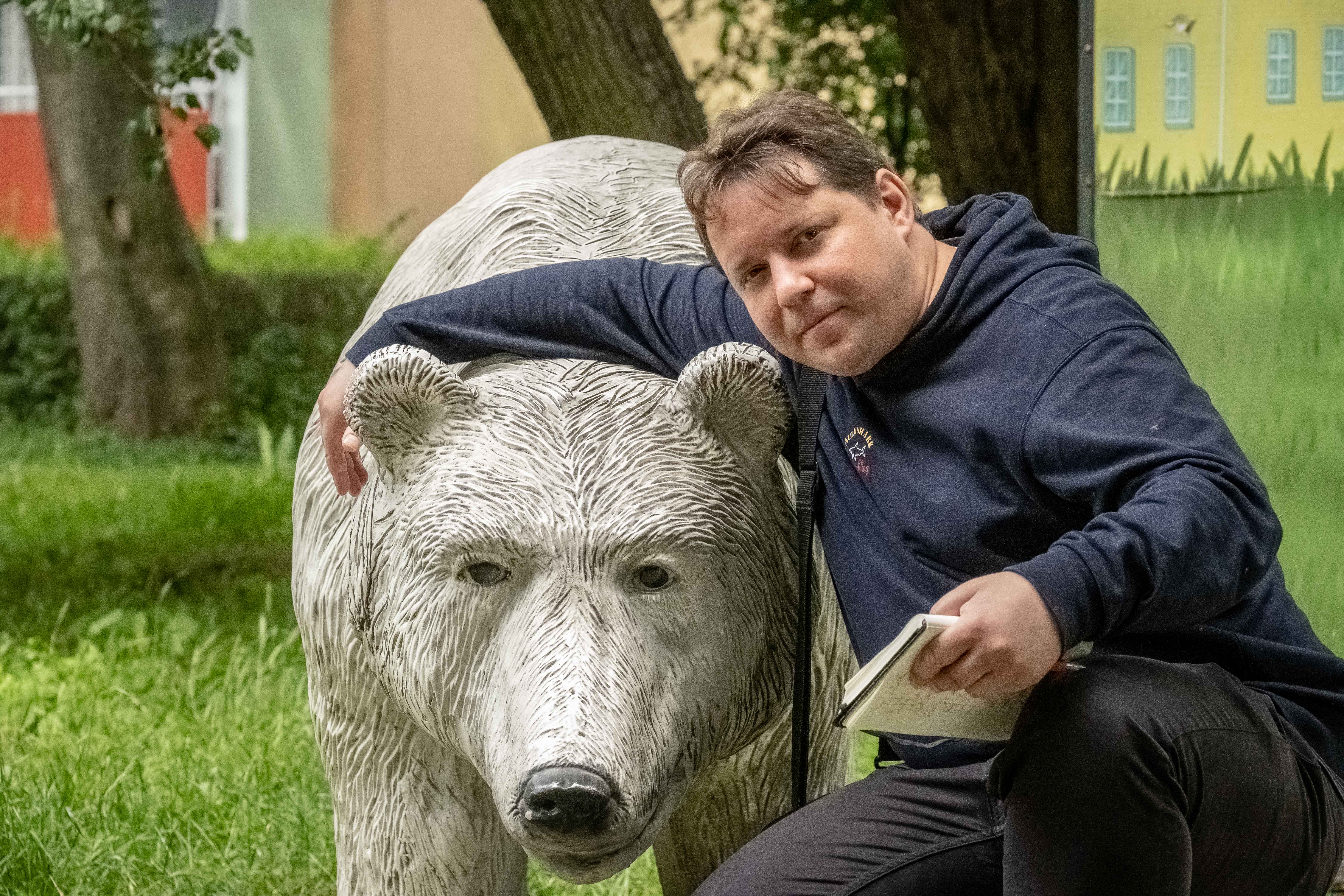 Baśka has now been added to Webber’s list of bears alongside Fozzie, Rupert, Yogi and Paddington who have had a meaningful impact on his life.Kalbar/TFN

In one of the town’s cafes, meanwhile, visitors order up Baśka cakes dripping with iced sugar – a sweet ending, you’d agree, to an unusual tale, and an ample reminder that there’s more to Modlin than its infamous airport.

Retail sales up by 1.3 pct y/y in January - Eurostat