“We surprised the world!” PM jubilant as Poland looks set to be country least affected by recession

Poland looks set to be one of the countries least affected by the oncoming recession, according to new data.

In a flash estimate on Friday, the Central Statistical Office (GUS) said that Poland’s economy grew by 1.9 percent year-on-year in the first quarter of 2020 after a 3.2 percent growth in the fourth quarter of 2019.

The data also shows that in quarterly terms, the Polish economy fell by 0.5 percent year on year.

A spokesman for the Stat’s office said: "The presented GDP flash estimate for the first quarter of 2020 takes into account the first effects of COVID-19 and the introduction of government measures to counteract the effects of the epidemic. Methods and data sources used to estimate GDP have not changed.

"As regards data sources, actions have been taken to ensure their completeness and comparability. 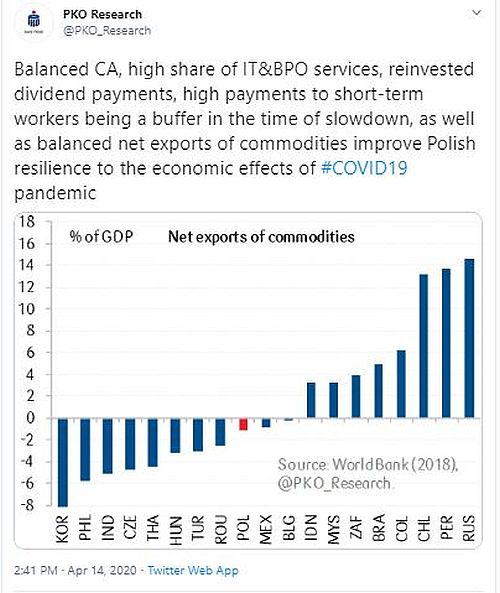 PKO Bank predicts that net exports and the government’s anti-crisis shield against the effects of coronavirus improve the country’s “resilience to the economic effects of COVID-19.”PKO

He said: "It's a 0.5 percent higher growth, hundreds of thousands of jobs, in spite of the fact that, already in March, this huge epidemic crisis started, transforming into an economic crisis. So we surprised the world, Europe, with how fast we acted. We were fastest in Europe with our health protection decisions.”

The PM added that in the second quarter it will not be possible to maintain the same economic growth as in the first, but thanks to the anti-crisis shield the slowdown in Poland will be milder compared to countries such as France, Spain, Italy or Germany.

The PM also said he hoped for a low single-digit GDP decline this year and a rebound in 2021, saying: "I hope that this year will be characterised by a low and short-lived GDP decline, several percent (...), which we will be able to make up for next year, perhaps with a small surplus.” 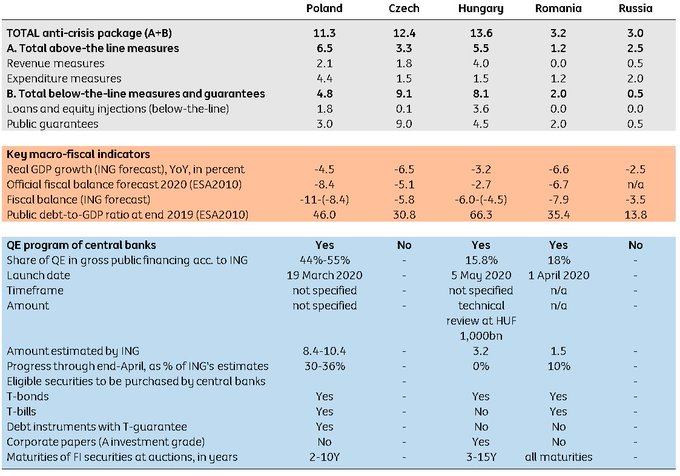 ING analysts compare how CEE countries responded to the economic fallout from Covid-19.ING

Referring to the anti-crisis shield, Morawiecki said Polish businesses received over PLN 1.5 million (EUR 330 million) daily in aid under its Financial Shield scheme. He also announced an unemployment benefit hike to PLN 1,200 (EUR 263.4) and a three-month PLN 1,300 (EUR 285.4) extra bonus for those losing their jobs due to the epidemic.

As an example of how the Financial Shield works, Morawiecki named the Flis confectionery manufacturer in Radziejowice, central Poland, which he visited earlier in the day. The company, which suffered a 35-percent sales drop owing to the epidemic, has received over PLN 1.7 million (EUR 370,000) under the aid plan.

Morawiecki said that when the epidemic began to hit companies financially, many companies like Flis found themselves confronted by the dilemma of whether to cut staff. In aiding such companies, Morawiecki said, the shield scheme has to date helped to save more than 3 million jobs.

Morawiecki admitted that no one today knows how the economic crisis caused by the epidemic will develop, and in this context observed that the US unemployment rate has risen by over 25 million over two months, with unemployment in western Europe also rising rapidly.

In this situation, he said, Poland decided to carry the costs of saving as many jobs as possible. 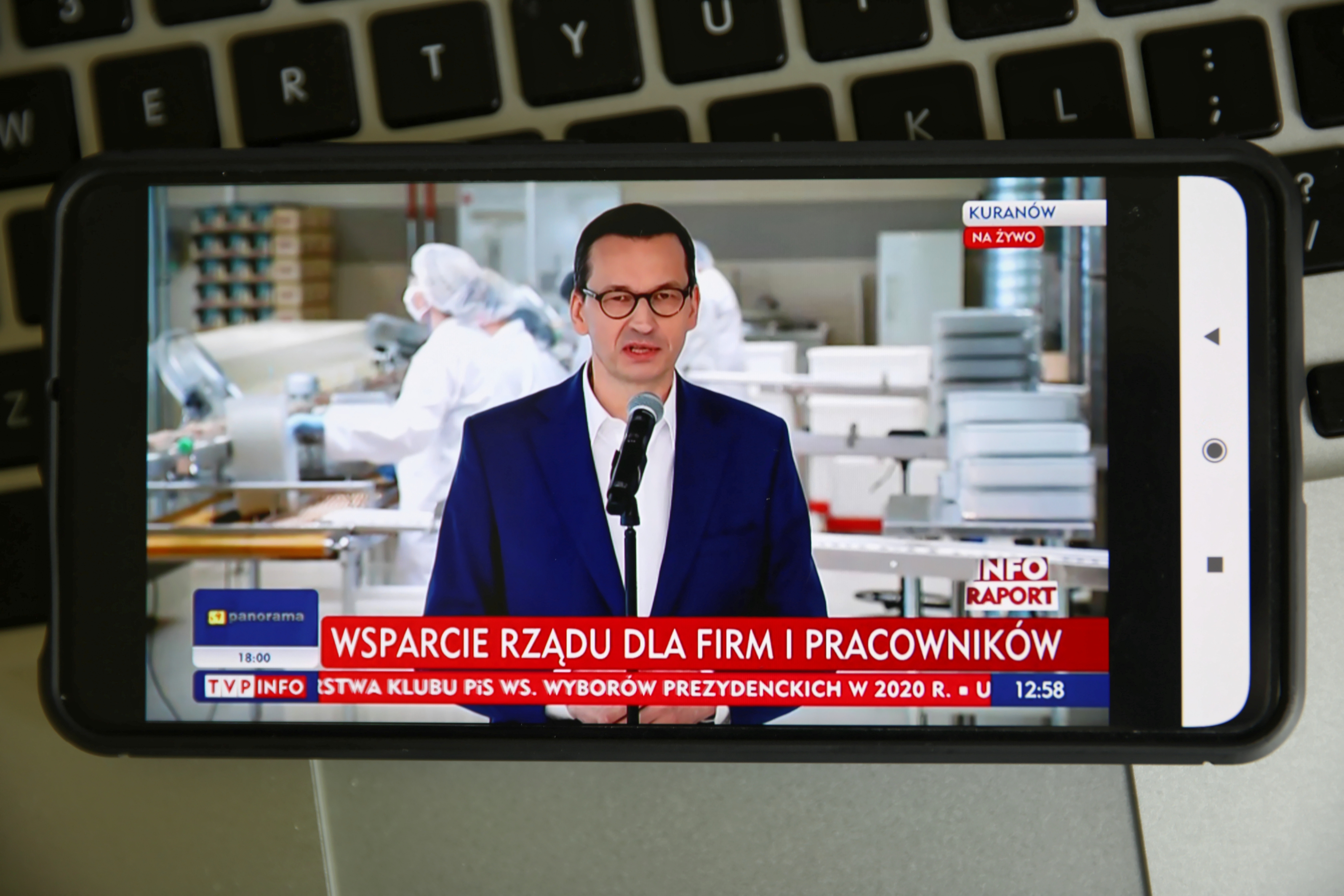 Morawiecki said the financial aid provided under the anti-crisis shield belonged to the fastest economic aid instruments in Europe, adding that this has been noticed by the EC and the European Bank for Reconstruction and Development (EBRD).

"This makes me very happy, it's the best proof that our mechanisms are working well," he said.

Morawiecki said that contrary to earlier fears, April did not bring hundreds of thousands of new unemployed, and pledged that his government will continue to do everything in its powers to protect the national economy and jobs.

"Together we'll come out of this crisis victorious," he said, adding that he believed this may happen within 6 months to a year. 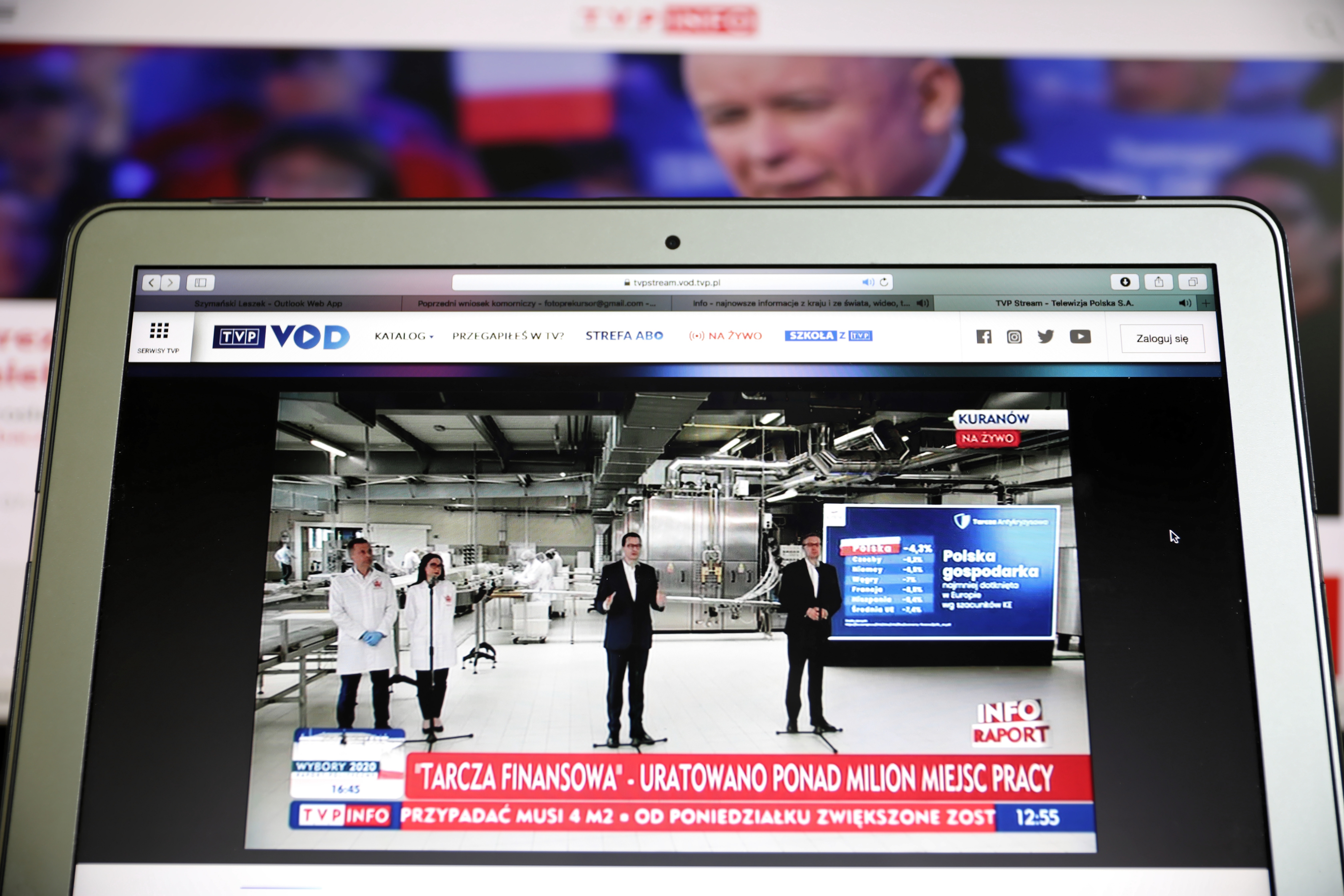 Speaking from the Flis confectionery manufacturer which he visited earlier in the day, Morawiecki said the financial shield had worked as  the company, which suffered a 35-percent sales drop owing to the epidemic, has received over PLN 1.7 million (EUR 370,000) under the aid plan.Leszek Szymański/PAP

Paweł Borys, head of the anti-crisis shield-overseeing Polish Development Foundation (PFR), said that so far 117,000 small and medium enterprises (SMEs) have received financial aid totalling over PLN 24 billion (EUR 5.3 billion) under the shield, which has helped save more than 1.2 million jobs.

Borys added that the aid was granted fast, reaching its recipients within 24-48 hours.

Flis co-owner Agnieszka Flis said that her company received its funding from the shield in 24 hours, which allowed it to pay staff wages on time.

The PLN 200 billion (EUR 22 billion) Financial Shield segment of the anti-crisis shield is addressed to companies who have suffered an at least 25-percent sales slump due to the epidemic.