‘We knew we couldn’t win. We fought so we could die with dignity.’ Harrowing words of Warsaw Ghetto Uprising survivor a powerful reminder of heroism in adversity on 79th anniversary of doomed resistance

On 19 April 1943, Jewish fighters from the Jewish Combat Organisation and the Jewish Military Union rose up in the Warsaw Ghetto in the first urban rebellion against the Germans in occupied Europe.

Though small in number and desperately short of weapons, the ghetto fighters held out for almost a month against a ruthless and murderous German force superior to them militarily in every respect.

Compared to the Jewish Zealots’ last stand at Masada against the Romans, a Ghetto fighter and Holocaust survivor wrote: “No act of Jewish resistance during the Shoah ignites the imagination to the same extent as the Warsaw Ghetto Uprising in April 1943.”

For the insurgents, the uprising was not a fight for victory or glory, but a bid to die in dignity. 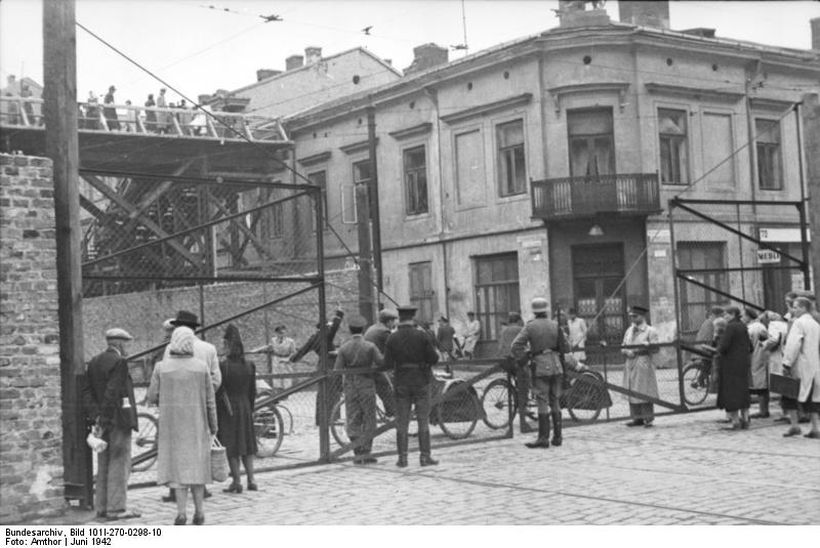 Marek Edelman, a Jewish Combat Organisation commander and survivor, said: “We knew perfectly well that we had no chance of winning. We fought simply not to allow the Germans alone to pick the time and place of our deaths.”

The Warsaw ghetto was the largest among those set up by the Germans. According to the census ordered by the German authorities and carried out by the Judenrat in October 1939, there were about 360,000 Jews in Warsaw.

Despite escapes and a high mortality rate due to disease and hunger, their number increased successively until it reached a maximum in March 1941 of 460,000.

Speculation about the ultimate intentions of the Germans was endless. When news of the murder of Jews in Vilnius filtered back to Warsaw, few were willing to believe it. 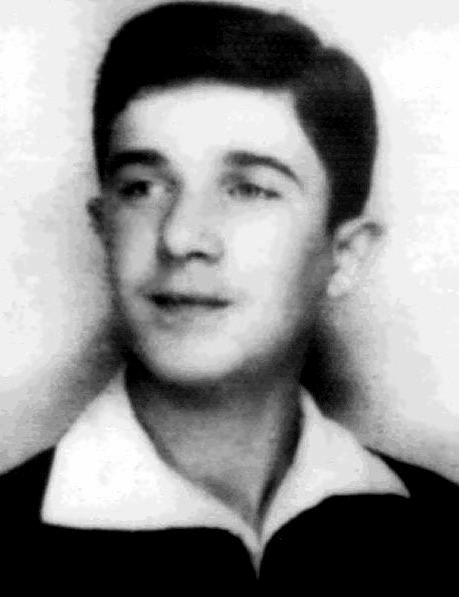 The leader of the Uprising, Mordechaj Anielewicz, decided to use Warsaw’s vast network of tunnels, bunkers and roofs to carry out guerrilla-style attacks on the Germans.Public domain

The first deportations to Treblinka began in summer 1942, and some younger Jews wanted to establish a common Jewish resistance organisation.

However, the elders demanded that they wait. They hoped that the deportations would be limited to the sick, the old, prisoners and beggars.

Many believed that open resistance would only provoke the Germans to greater atrocities and that it was best to stay calm.

They were wrong. Within two months around 265,000 people had been sent to the death camp in Treblinka, including many members of the underground movement. 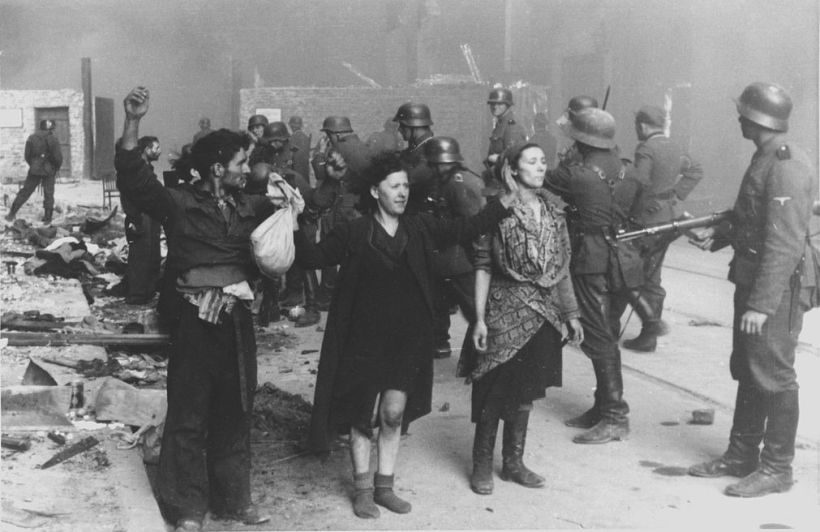 Originally captioned ‘These bandits offered armed resistance’ by the SS officer who took it, the photo shows Jews rounded up on Nowolipie street, near to the intersection with Smocza street. In the back the ghetto wall can be seen with a gate.Public domain

The awareness that the Germans were striving for the total extermination of Jews changed the character of Jewish resistance.

The structure of the ghetto had changed. Most of the children and older people had been murdered. Those who remained were young people, capable of work, traumatised by the brutal liquidation of the ghetto and the loss of their loved ones.

The young Jews now under no illusion of what awaited them decided to act alone. On July 28, 1942, the Jewish Combat Organisation (ŻOB) was established.

At its inception, the fighting unit had 200 members and an arsenal of one pistol. 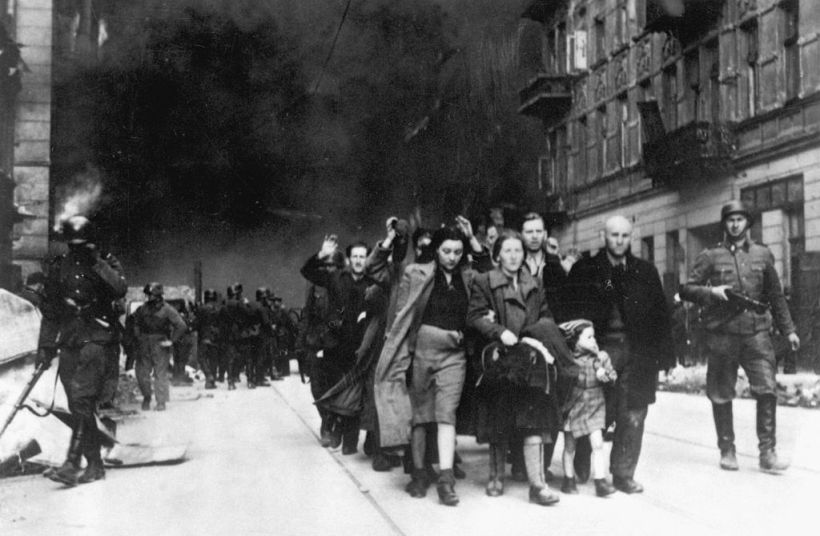 Hopelessly outgunned and outmanned the uprising had little chance of success.Public domain

Apart from ŻOB, the Jewish Military Union (ŻZW), whose members came from the pre-war Jewish national movement Betar, was also active in the ghetto. However, little is known about its activity as almost all of its approximately 260 fighters died in the ghetto uprising.

One of ŻOB’s  first tasks was to pass judgments on Jews who had collaborated with Germans during the first phase of the deportations to Treblinka. On 29 October, Jakub Lejkin, who had commanded the  Jewish police during the liquidation, was executed on Gęsia street by a ŻOB assassin.

The most pressing problem, though, for the fighters from both groupings was the lack of weapons. The deliveries they received from the Polish underground were not what they were expecting and not sufficient. 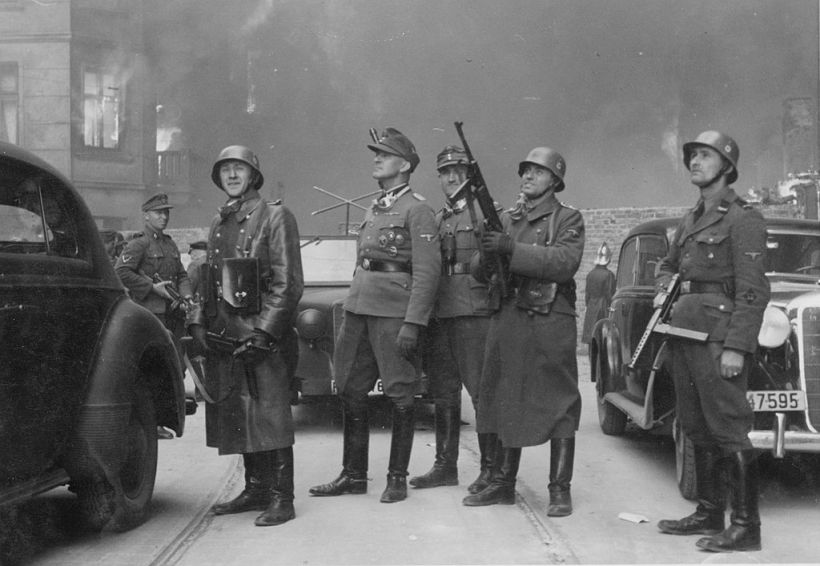 Led by Jurgen Stroop (pictured centre in cap) the German response was ferocious. Initially, the insurgents benefited from their positions looking down on the Germans from the upper storeys of buildings. But Stroop soon changed that. Set against them were more than two thousand heavily armed Wehrmacht, SS and Ukrainian, Lithuanian and Latvian auxiliary units with armoured vehicles and artillery.Public domain

They tried to get weapons from the ‘Aryan’ side in various ways. Underground plants produced Molotov cocktails, sulphuric acid-filled light bulbs and grenades.

In the autumn of 1942, ghetto residents began to build tunnels, bunkers and shelters. Most of them no longer had any illusions about the German plans and were aware that the people deported from the ghetto were being murdered.

The first armed uprising took place in the ghetto on January 18, 1943, when the Germans started the second phase of the deportations to Treblinka.

This time, however, the Germans encountered armed resistance from ŻOB. During four days of uneven fighting, several hundred Jews died. The Germans deported about 4,000 people, but they eventually withdrew to take stock and review their plans. 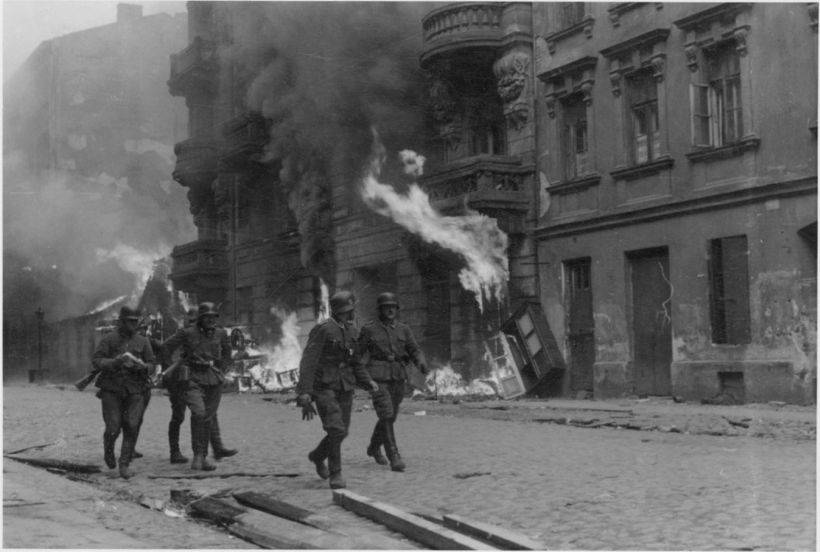 Under Stroops command, the troops began systematically burning and destroying house after house, forcing civilians to leave bunkers and shelters when the oxygen was sucked out of them by the fires.Public domain

After a lull of almost three months, fighting broke out again on the morning of April 19, 1943, when 850 Waffen-SS soldiers armed with machine guns, flame throwers, cannons, armoured vehicles and tanks entered the ghetto through the gate on Nalewki street.

They were overwhelmed by Jewish fighters in initial clashes. In the afternoon, more and better armed German units entered the ghetto commanded by General SS Juergen Stroop.

In total, about a thousand poorly armed insurgents took part in the fighting. Set against them were more than two thousand Wehrmacht, SS and Ukrainian, Lithuanian and Latvian auxiliary units with armoured vehicles and artillery.

For almost a month, Warsaw ghetto fighters fought the Germans. Initially, the insurgents benefited from their positions looking down on the Germans from the upper storeys of buildings. 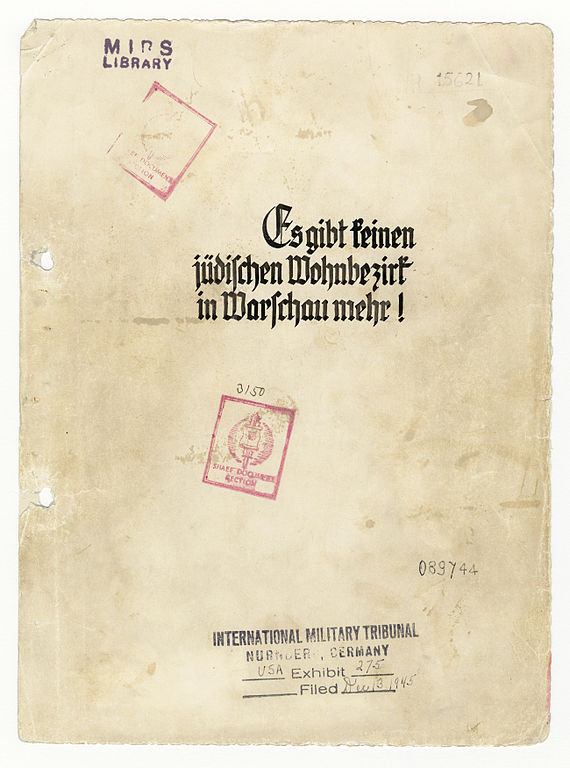 In a report especially written by Stroop for Himmler entitled ‘There is no Jewish Quarter in Warsaw anymore’ the document announced that from April 20 to May 16, 1943, over 56,000 Jews were discovered in bunkers and liquidated. Around 6,000 Jews died in battle, in fires or as a result of carbon monoxide poisoning.Public domain

However, the Germans soon overcame this disadvantage by burning and destroying house after house, forcing civilians to leave bunkers and shelters when the oxygen was sucked out of them by the fires.

On May 8, the Germans discovered and surrounded a huge bunker at 18 Miła street, where several hundred people were staying, including over 100 Jewish fighters.

The civilians surrendered, but the ŻOB command, including Mordechaj Anielewicz, which the bunker is now named after, stood firm. The Germans threw tear gas into the shelter to force them out.

Anielewicz, his girlfriend Mira Fuchrer and many of his staff committed mass suicide by ingesting poison rather than surrender, though a few fighters who did neither managed to escape through a rear exit, and later fled from the ghetto through sewers to the ‘Aryan’ side. 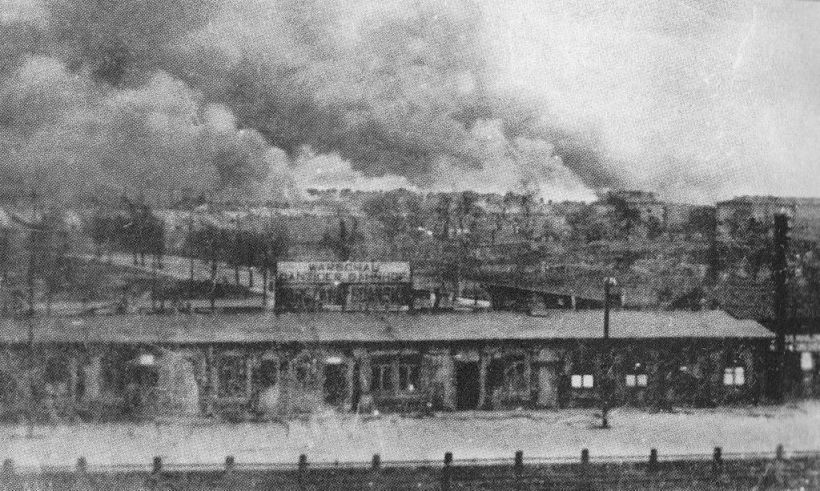 Gdański railway station and the burning ghetto in Warsaw.Public domain

The uprising, despite the appeals of the Polish government in London, did not provoke any reaction from the Allies.

In protest against the indifference of the world to the tragedy of the Jewish people, on May 12, 1943 Jewish activist and member of the Polish government-in-exile in London, Szmul Zygielbojm, committed suicide.

The insurgents fought in small, scattered groups until May 16, 1943. On that day, General Stroop announced the end of the pacification action and, as a sign of victory, ordered the Great Synagogue on Tłomackie street to be blown up.

He placed his report of the suppression of the uprising in an attractive leather binding and presented it to Heinrich Himmler as a souvenir. 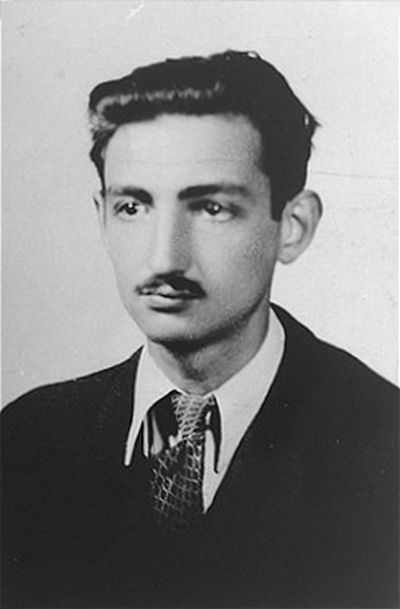 Marek Edelman who fought the Ghetto Uprising and after the war became a doctor, commented: “We knew perfectly well that we had no chance of winning. We fought simply not to allow the Germans alone to pick the time and place of our deaths.”Public domain

The Warsaw Ghetto was razed to the ground. According to General Stroop's report, from April 20 to May 16, 1943, over 56,000 Jews were discovered in bunkers and liquidated. Around 6,000 Jews died in battle, in fires or as a result of carbon monoxide poisoning.

The Germans murdered 7,000 Jews in the ghetto and sent the same number to Treblinka. The remaining group of about 36,000 was sent to other camps, mainly to Auschwitz and Majdanek.

The Germans estimated their dead at around a dozen, though Jewish and Polish sources put this much higher.

Among the ŻOB fighters, several dozen survived the uprising in the ghetto. Most of them, however, did not live to see the end of the war. They died fighting in partisan units, in the Warsaw Uprising or they surrendered to the Germans. Only a few survived the war, including ŻOB commander Marek Edelman.

Edelman said about the fighting: “These are such beautiful words: dignity, humanity. That's what we defended.”

Polish family murdered for helping Jews may be beatified