From the miniature Star of David on the tip of its roof, to the small crowd assembled around its feet, everything at the opening of Warsaw Miniature Park’s new model of the Great Synagogue felt pleasantly homely.

But there was certainly more to the story than that. In the shadow of the miniature of the stocky, sprawling Saxon Palace, Thursday’s opening also meant Warsaw was united, once again, with its Synagogue – and with the Jewish legacy in Poland.

“We were living together once – and maybe it’s possible once more”, says Konrad, staff member at the Park. 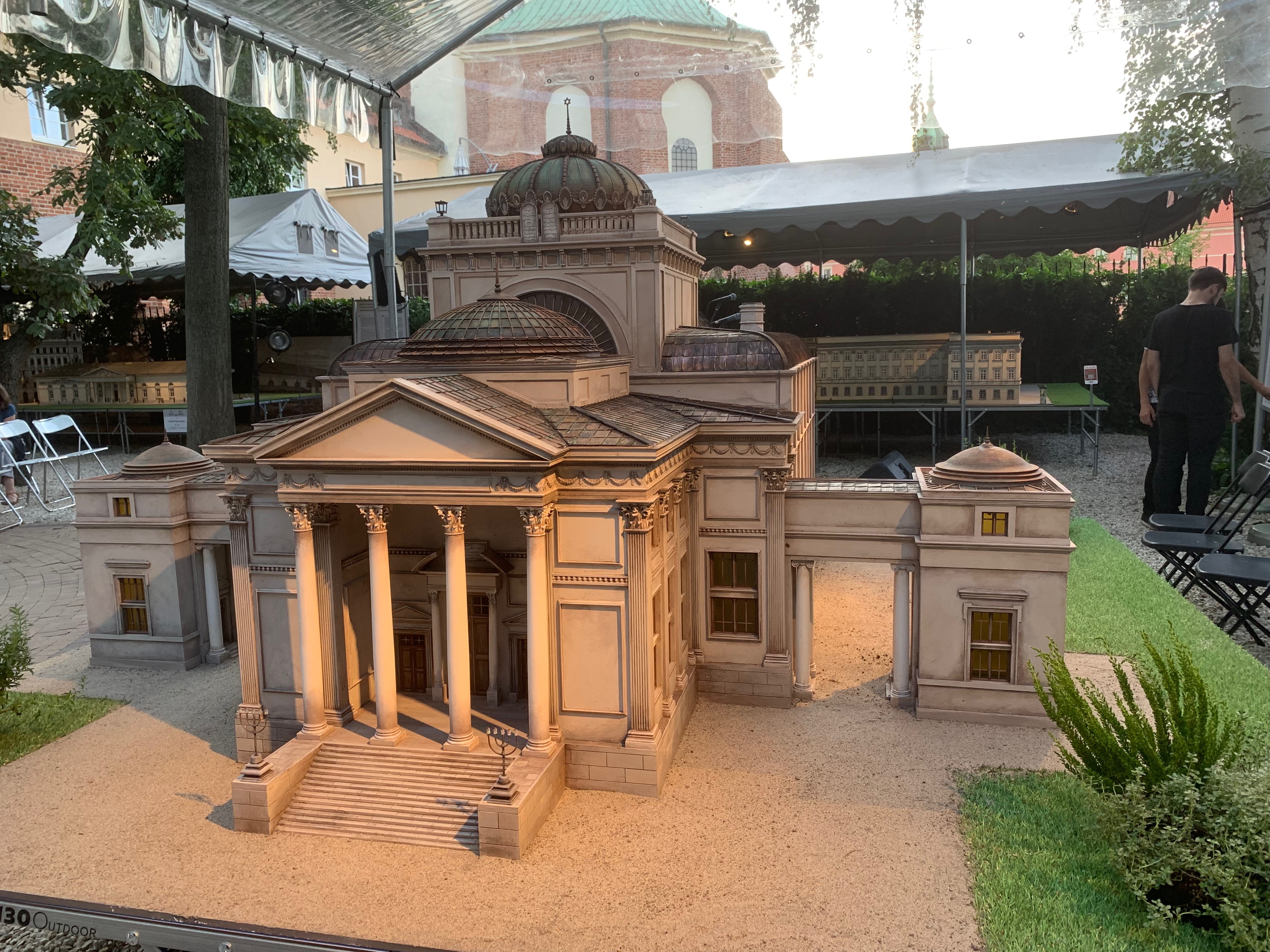 The model showcases the significance of the Synagogue within its collection of key buildings across Warsaw’s history.Juliette Bretan

The 40-odd guests who assembled in the Park’s courtyard to attend the official opening were met with the model of a building which was not only once seen as an architectural triumph, but also represented a golden age in Polish-Jewish relations.

And the 1:25 scale model could well become the jewel of the Miniature Park’s collection too. It is immaculate; hold-in-your-arms-able – as the balmy Warsaw dusk set in, above blossoming pilasters the iridescent tiles on the Synagogue’s bulbous, belvedere crown sparkled a captivating gold and bronze in the setting sunlight.

And, around to the side, a yawning cut-out hole, trimmed with amputated columns, exposed the Synagogue’s once-famed interior to peering guests, where rows upon rows of unadorned wooden pews peered towards the podium.

But that gaping wall was also a clear reminder of the destruction the Synagogue had faced. Those truncated columns framing its core may have immediately brought to mind the still-standing carcass of Warsaw’s Saxon palace – but they could also stand for the presence of Jewish people in Poland and in Warsaw today. 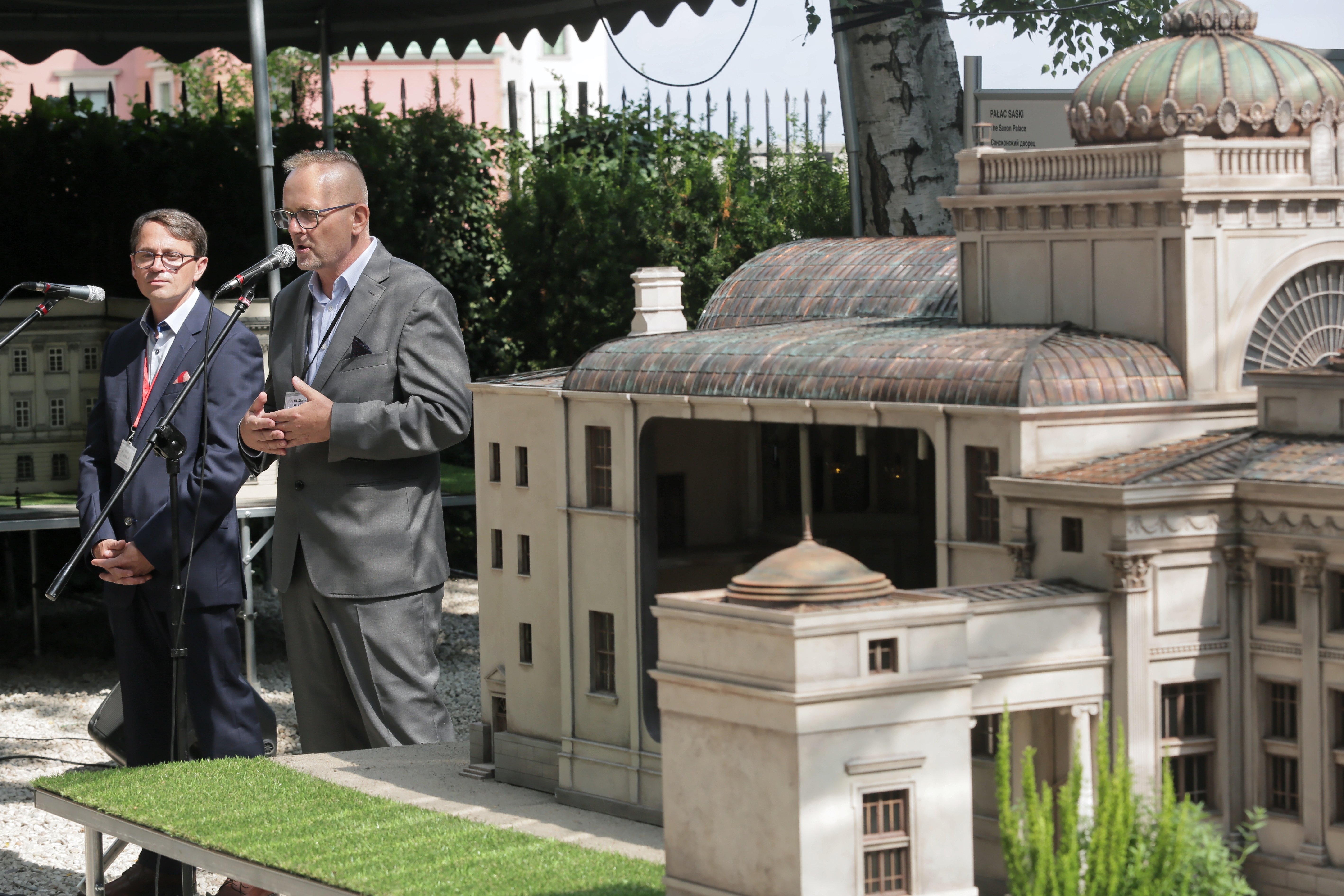 The guests who assembled in the Park’s courtyard to attend the official opening were met with the model of a building which was not only once seen as an architectural triumph, but also represented a golden age in Polish-Jewish relations.Wojciech Olkuśnik/PAP

In times gone by the earnest pews beneath were once home to an extensive and talented Jewish community. Today, they lie empty. It would also come as no surprise that the outside of the Synagogue lacked the spray of meticulously-rendered miniature figures which feature in the Park’s other models.

Konrad, however, sees the building as a symbol of the successes of Polish-Jewish activity. “It’s an integral part of Polish history as well,” he says.

In fact, when the Synagogue opened on 26 September 1878, the Polish rabbi and preacher Isaak Cylkow had implied similar.

The Progressive Judaism community had funded the Synagogue’s construction, which began in 1875; its design by prominent Polish architect Leandro Jan Marconi allegedly inspired by the façade of Łazienki Park’s Palace on the Isle. 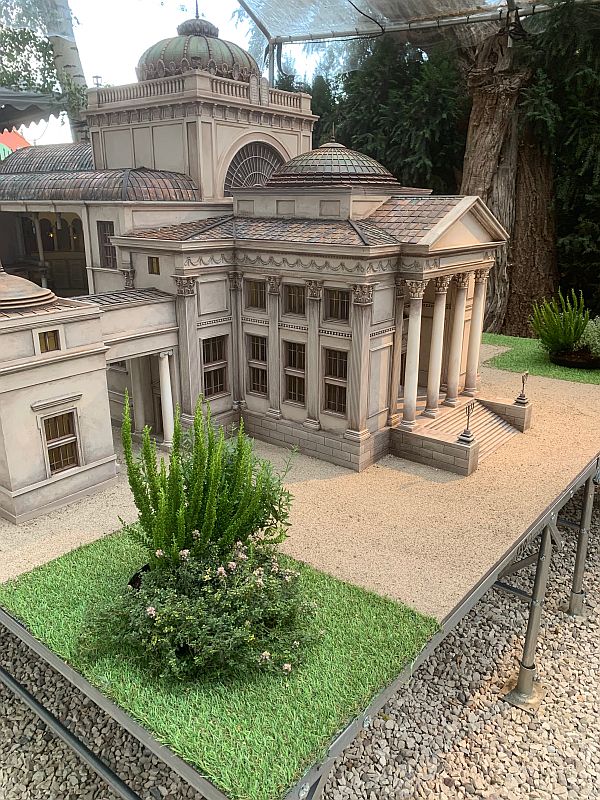 It might have taken 19th Century builders three years to erect this bastion of Warsaw’s Jewish community, but even in miniature, it was a painstaking year before construction was completed.Juliette Bretan

When finished in 1878, it could seat 2,200. The Torah ark was built from cedar imported straight from Lebanon.

It might have taken those 19th Century builders three years to erect this bastion of Warsaw’s Jewish community, but even in miniature, it was a painstaking year before construction was completed.

“The most difficult part of the process is to create a plan of the miniature, because the building doesn’t exist anymore,” explains Konrad.

But even their usual strategy to gather plans and photographs of the original came across an immediate snag. 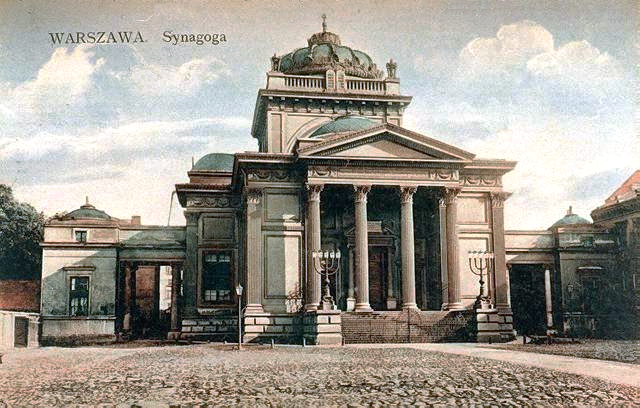 The Great Synagogue of Warsaw was one of the grandest buildings constructed in Poland in the 19th century and at the time of its opening was the largest synagogue in the world. After the Warsaw Ghetto Uprising, on May 16, 1943 the Germans blew up the building. It was not rebuilt after the war.Public domain

“The Germans destroyed the archive,” he says. “There are fragments; bits and pieces. You gather them all together and it’s a bit like a detective work.”

The result was detective work with a splash of innovation: the model is the first in the Park’s collection to possess working electrics. The miniscule, Promethean globules of golden light mark a promising future for the Park, ever-growing in popularity – but more importantly showcase the significance of the Synagogue within its collection of key buildings across Warsaw’s history.

And though the team are already planning future builds, including possible plans for the Alexander Nevsky Cathedral, which stood in the middle of what is now Piłsudski Square, the Synagogue was most certainly a labour of love. 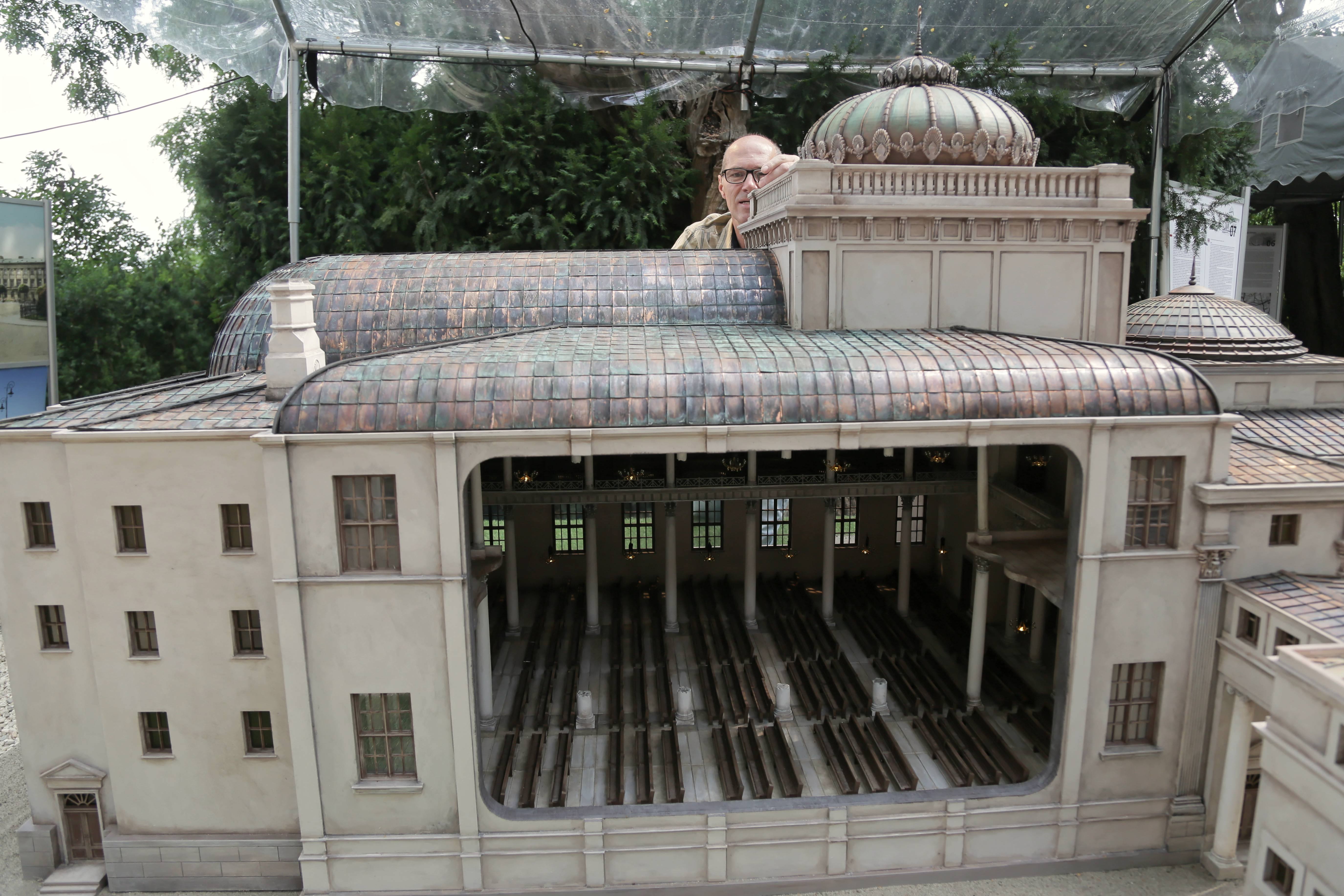 A yawning cut-out hole, trimmed with amputated columns, exposes the Synagogue’s once-famed interior to peering guests, where rows upon rows of unadorned wooden pews peered towards the podium.Wojciech Olkuśnik/PAP

Jews made up a third of Warsaw’s population during the interwar era, and the Synagogue embraced assimilation between both Poles and Jews in the city.

One day, it would host celebrations of state events, including the anniversary of regaining independence; the next, Christians alongside Jews would pile up the stairs, framed by two oversized Menorahs, and into the exquisite interior to hear what was considered a legendary choir. That belvedere spanned more of Warsaw than one might expect.

Konrad firmly agrees: “It’s a symbol of the merging of cultures,” he says, “which unfortunately was ended by the Second World War.”

Along with the horrific fate of Warsaw’s Jewish community, the Synagogue was bombed and destroyed on 16th May 1943, at 20:15pm. 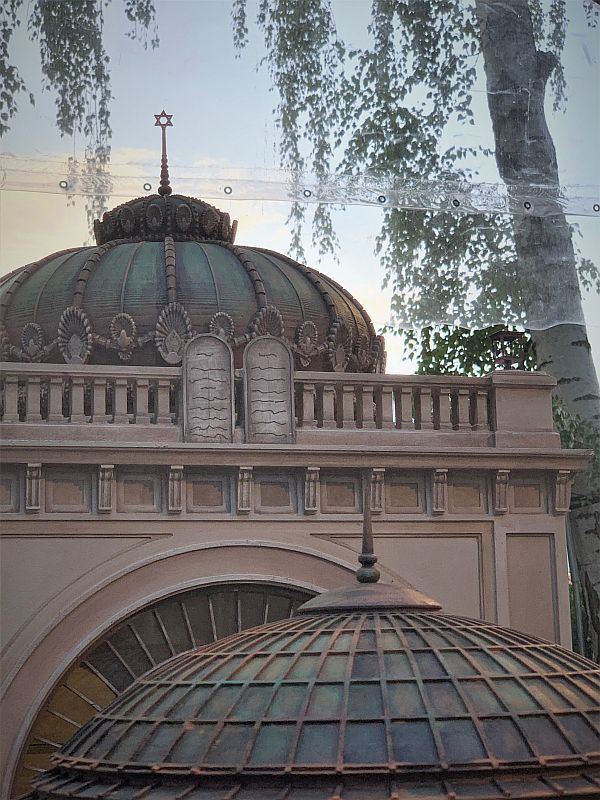 From the miniature Star of David on the tip of its roof, to the small crowd assembled around its feet, everything at the opening of Warsaw Miniature Park’s new model of the Great Synagogue felt pleasantly homely.Juliette Bretan

The Park’s model brings something of the former history of this small segment of Warsaw – and of Warsaw’s history – back to life. But so too did the accompanying concert at its opening: ‘Majn jidisze mame’, directed by Piotr Stawski.

As a cooler breeze whispered through the trees around the Park, the music sparked up in shades of melancholic yearning; with bittersweet trills reminiscent of Chopin, and stories of Jewish-Polish memory, performed impeccably by Szymon Sutor on piano, and vocalists Zuzanna Makowska, Justyna Cichomska and Bartłomiej Wiater.

And, of course, a generous dose of Yiddish tango was included too. This genre, popular in the Synagogue’s heyday during interwar Poland, fused the dramatic accents of its Argentine cousin with a more mournful Jewish sound, all on a still-palpable wave of traditional Yiddishkeit and Klezmer. The Synagogue might have opened its doors to both communities, but the sound of tango also laid the foundations to assimilation between Poles and Jews.

It felt like no coincidence that one of the other songs played was the 1932 ‘Miasteczko Bełz’, which describes an individual’s exile, and then return, to his now-mysterious hometown. 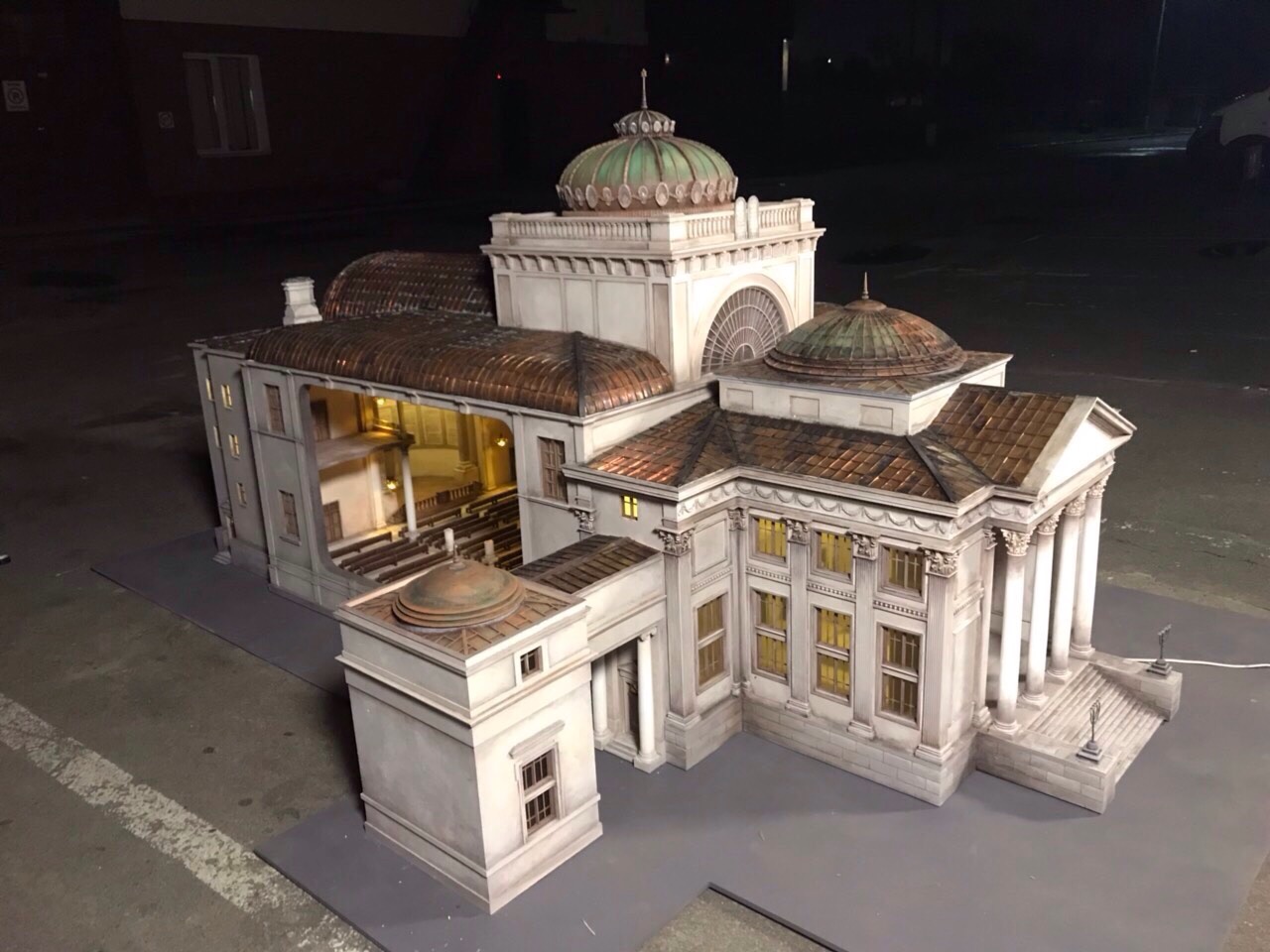 The model is the first in the Park’s collection to possess working electrics.Press materials

But unlike the end of the song, in which the protagonist fears he will never be able to resurrect his home, his ‘tiny little town’, the opening of the miniature Synagogue perhaps was a more promising step in this direction.

For its original opening back in 1878, Cylkow had hoped “that never again will we be considered to be a separate community nor as a separate people treated, but as eligible children of our country, the citizens of one country”.

Under its new, ‘tiny little’ belvedere, perhaps something of that oneness; of that hub of community, can be finally, and fully, revisited again.

To read more about the Miniature Park click here.

Sing it loud for Singer! Once dark and neglected, the former centre of Jewish life in Warsaw now echoes to the sound of life and laughter