Dozens of photographs taken at the Sobibór death camp have come to light after lying forgotten for decades in Germany.

The photographs of the German extermination camp that was located in what is now eastern Poland are part of a collection of 361 pictures that belonged to the former second in command of the camp Johann Niemann.

Previously, only two photographs were known to exist from the time of the camp’s operation from April 1942 to November 1943, but those were close-ups of people.

Now, researchers and the public have access to a trove of images that offer never-seen-before details of the camp that Germany set up for the sole purpose of murdering Jews, mainly from Poland and the Netherlands. 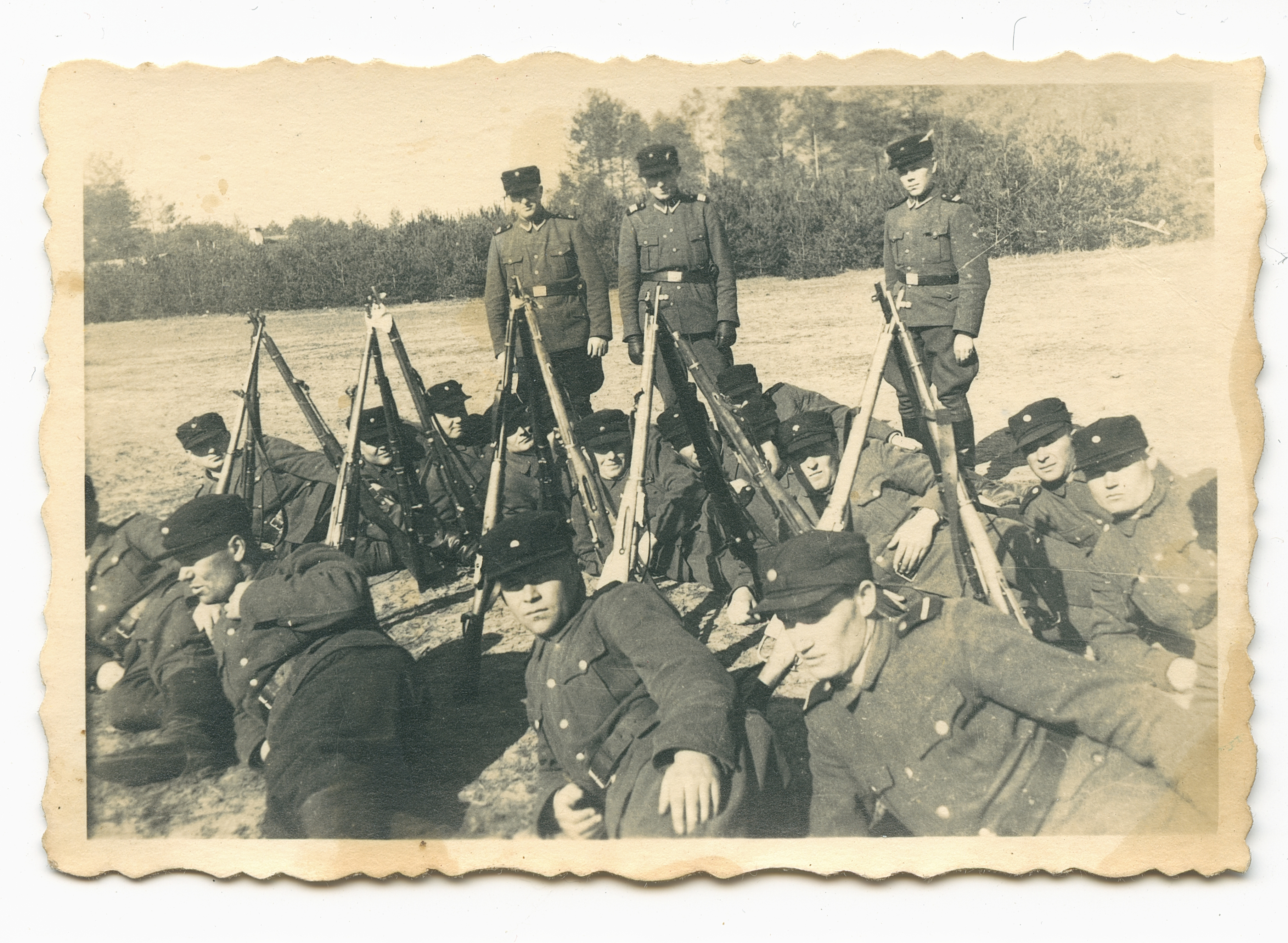 The photographs, which are contained in two albums, one with an image of a sailing ship on the cover and the second that bears the name of Niemann’s previous SS unit, have been displayed recently at an exhibition in Germany.

They have now arrived at the United States Holocaust Memorial Museum after being donated by the grandson of Niemann.

Dr Edna Friedberg, a historian at the museum, told TFN: “It’s hard to overestimate how important these photographs are. In visual terms, Sobibór has always been rather a black hole.

“These images now allow us to confirm and expand our knowledge of the industrial mass murder of Jews that was the Final Solution. It is gratifying that these photographs corroborate what we knew from the accounts of the few survivors.” 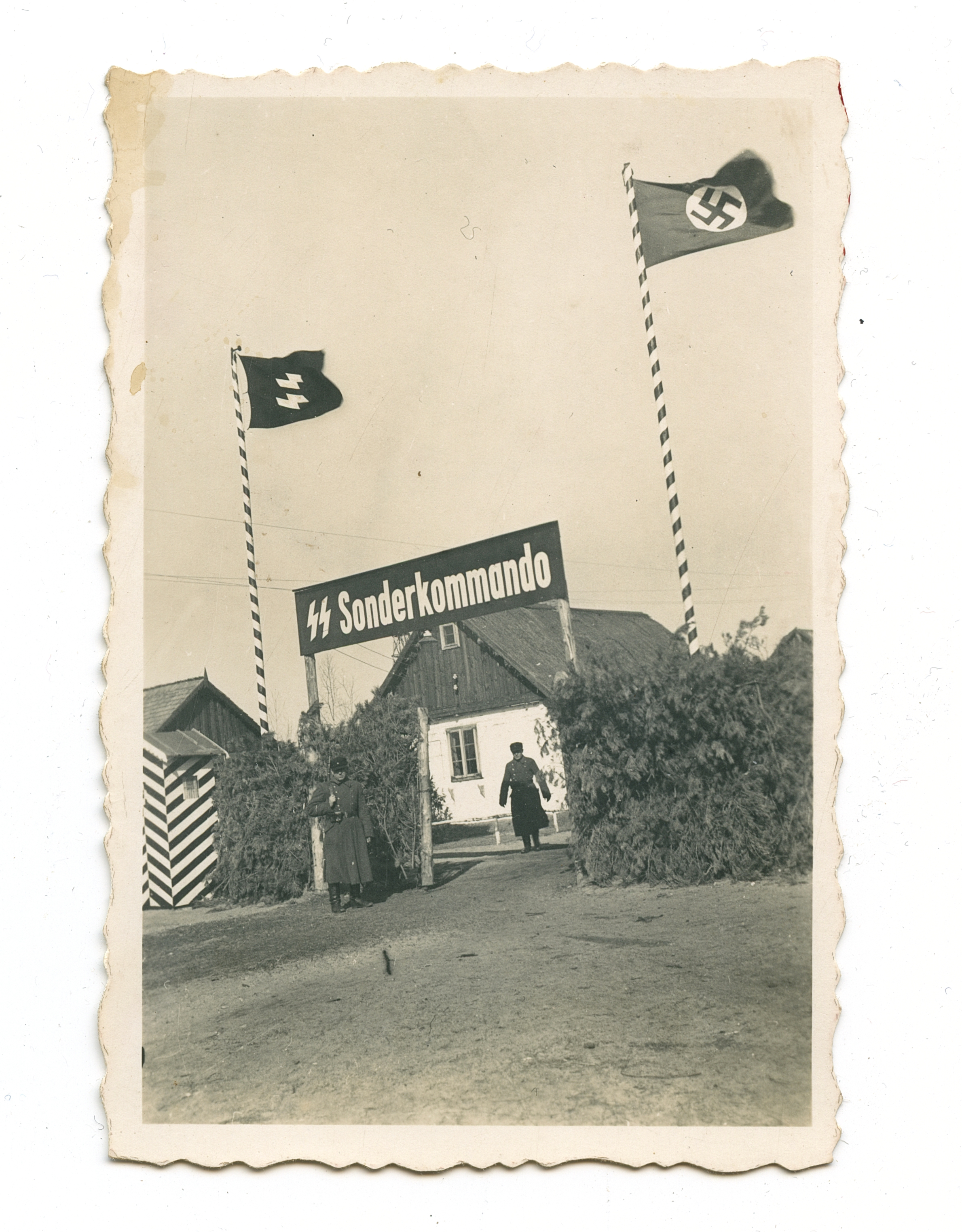 Gate to the Sobibór killing centre. Transports of Jews arriving on foot or by truck would enter through this gate.United States Holocaust Memorial Museum

While the photographs do not show the processing of Jewish victims at the camp, they reveal details of the camp’s killing infrastructure.

Among the eight photographs from the Sobibór Perpetrator Collection that TFN has received permission to publish, one shows a wide-angle shot taken from a guard tower looking across a large section of the camp.

Among the wealth of details, a guard can be seen patrolling the perimeter, while on the left two prisoners are visible working near wood piles. In the background is what was known as the Front Camp, the area for German SS staff.

The large building on the left, the home of the camp commandant, is the only building from the camp that survives to this day. 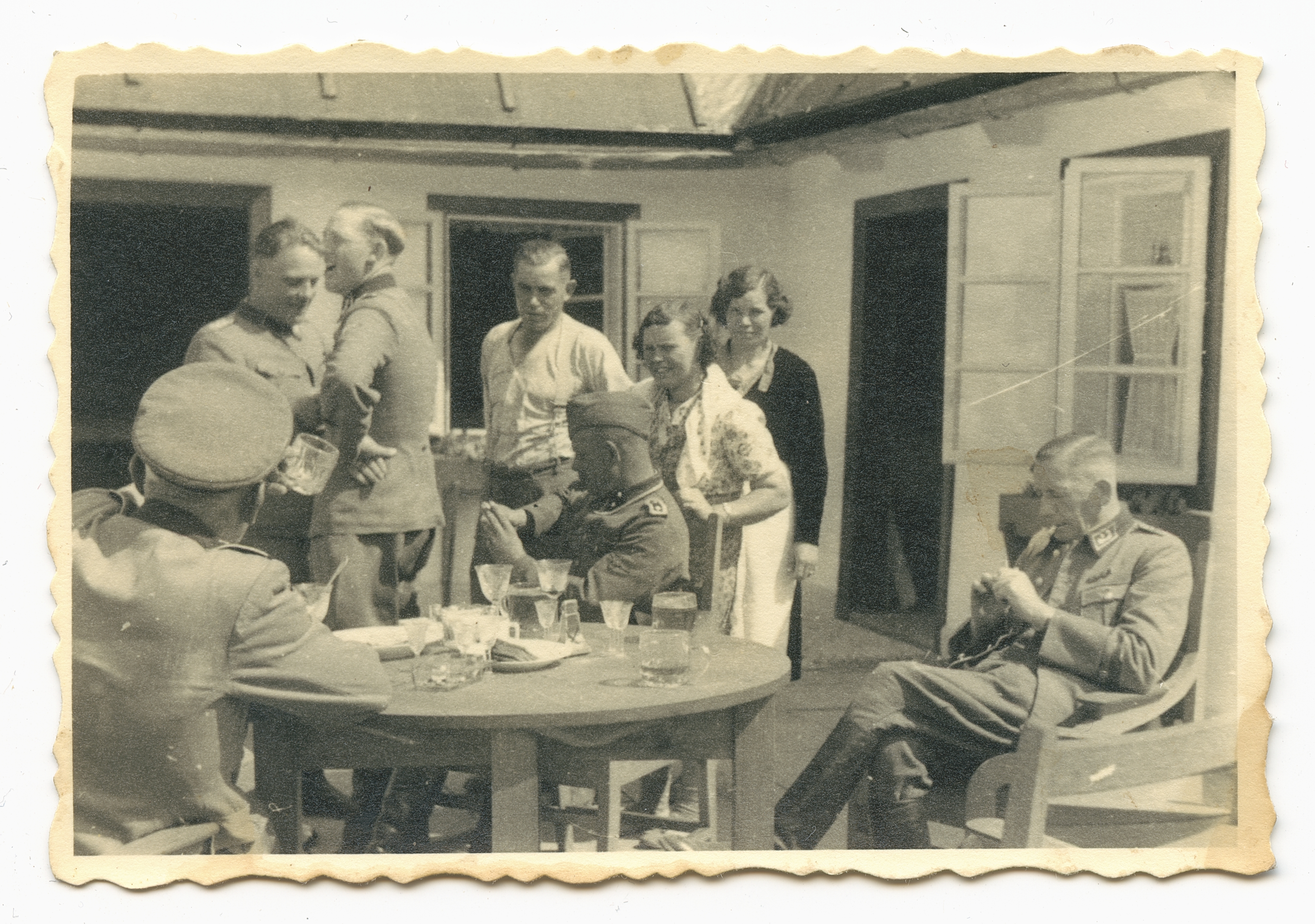 SS staff relax on the patio of the officers' mess, known as the Kasino - Johann Niemann third from the left.United States Holocaust Memorial Museum

Perhaps most shocking are the images that show Niemann and his fellow SS officers enjoying themselves during breaks between administering the mass murders.

One image shows Johann Niemann with other SS officers relaxing and laughing on the patio outside the mess hall, known as the Kasino.

“Most shocking is the complete disconnect between the work that they were doing and they spent their free time,” Dr Friedberg said.

“We see the perpetrators as we have never seen them before. We see their body language, we see them laughing and smiling.” 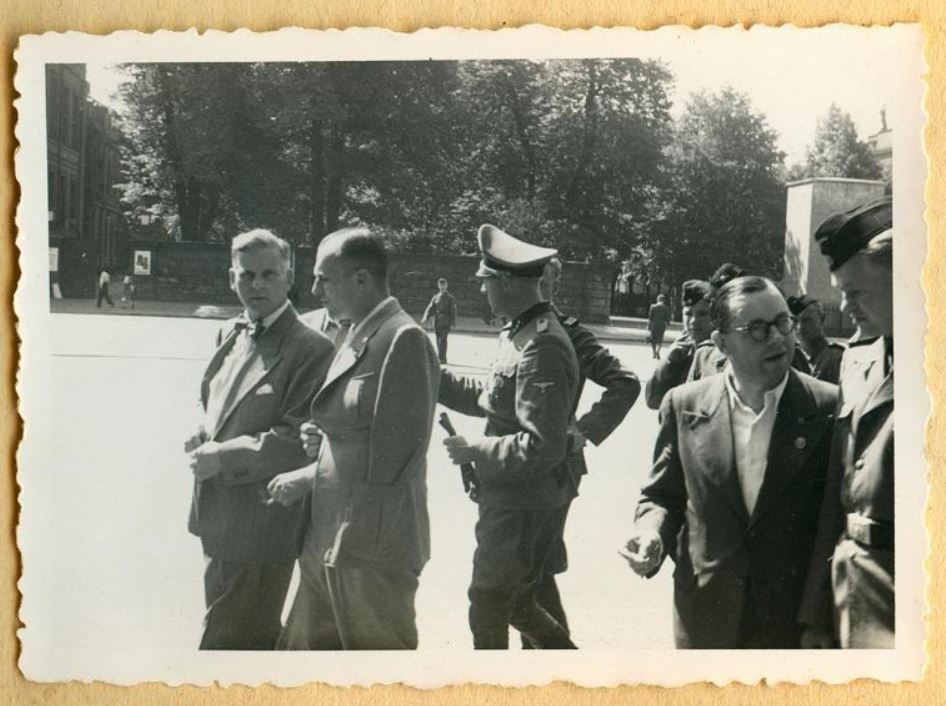 Another photograph shows a group of Trawniki men relaxing on the grass near the gas chamber with their rifles neatly stacked in groups of three.

In the background is the Road to Heaven. Also known as the tube, it was the path along which Jews were herded to the gas chambers. The path curved slightly so that victims could not see their final destination, thereby allowing the Germans to maintain their deceit until the last moment.

These Trawniki men were Soviet prisoners of war trained by the Germans to operate the death camps when the toll the killings were taking on German staff became apparent to SS boss Heinrich Himmler.

Many people have speculated that the man staring at the camera at the front is John Demjanjuk, who was extradited to Germany from the United States to stand trial for his role at the death camp.

In 2011, he was convicted on 27,900 counts of acting as an accessory to murder. He appealed against his sentence, but died in 2012 in a nursing home in Germany. 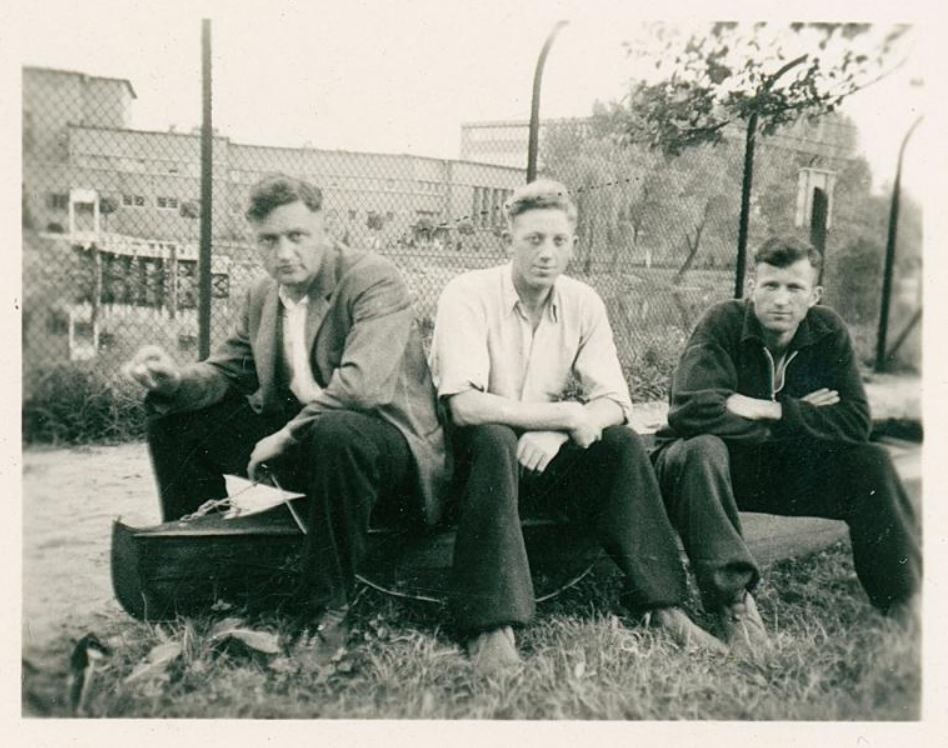 However, Dr Friedberg says, “[H]e was just one man. What we see in the photographs is the complicity of all these men and the degree to which they were deeply integrated with the Nazi personnel.”

Among the photographs that have not yet been released are ones that show these Trawniki men on a trip to Berlin with their SS colleagues, which they were given as a reward for performing well at the camp.

“They are photographed walking around Berlin, looking at the sites, drinking beer and eating snacks. Then they return to Sobibór to continue the industrial scale murder of over 167,000 people,” Dr Friedberg said.

The existence of the albums shows that Niemann and others like him believed that they were doing something good that they wanted to have souvenirs of their endeavours.

The whole collection numbers some 361 photographs and plots Niemann’s career from his involvement in the T4 euthanasia programme that murdered disabled Germans to his position as second in command at Sobibór. 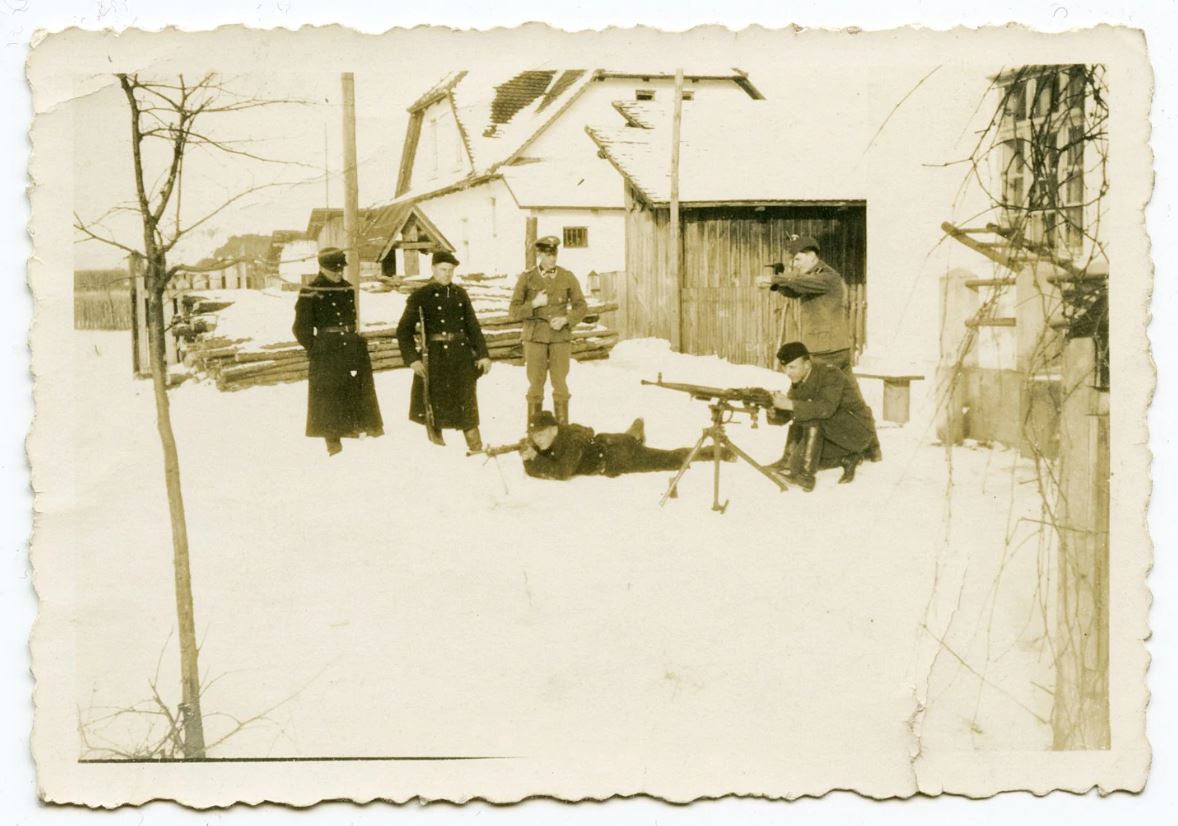 One photo shows Niemann in 1940 crouched on the ground with colleagues outside a T4 killing location in Germany.

“The albums show how he progressed through the killing hierarchy, which functioned like a business – identifying effective staff and promoting them to jobs with more responsibility,” Dr Friedberg said.

Niemann was known as a vain and self-absorbed man who took pleasure in his appearance. This can be seen clearly in a vanity shot of Niemann on a horse taken on the arrival ramp where Jews were unloaded from goods wagons before being murdered.

It was this vanity that eventually lead to his death. In October 1943, 600 prisoners performing slave-labour for the daily operation of the camp rebelled.

Niemann, who was acting commandant on the day of the rebellion, was lured to the tailor’s barracks expecting to receive a leather jacket. Instead he was killed by an axe blow to the head. 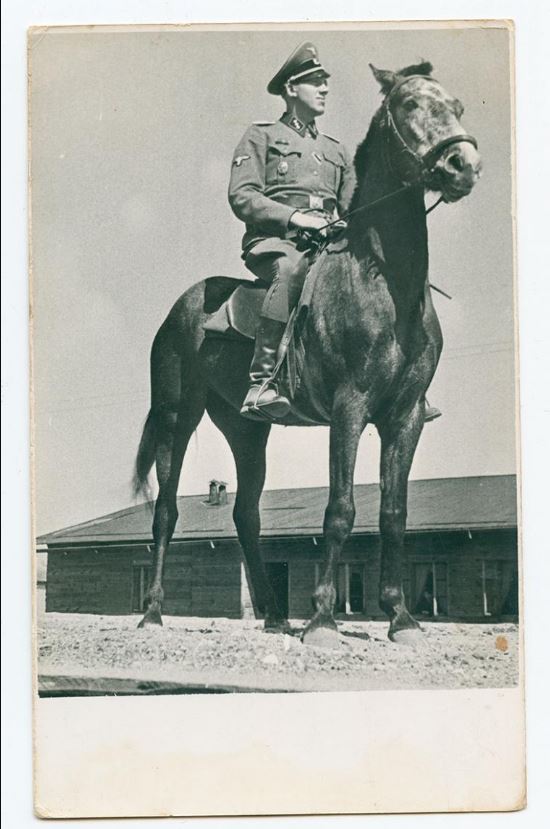 His possessions, including the albums, were sent to his widow, and they remained in the family until they were discovered by Holocaust researchers in Germany.

After the war, many similar albums were most likely destroyed as they constituted evidence of involvement in the crimes.

However, Dr Friedberg believes that because Niemann was already dead his family had no incentive to destroy the album.

“In effect, it is directly because of the Jews who rebelled at the camp in 1943 that we have these photographs today,” she said.

The photos will now undergo preservation and examination in Washington. After that, some of them are to go on display at the permanent exhibition at the new museum building in Sobibór, which is due to open next year.