Already established as one of Poland’s best-loved artists, the reputation of Tytus Brzozowski is set to hit uncharted levels as anticipation builds over the release of a new series of paintings commissioned as part of his nascent cooperation with Instytut Polonika.

With a string of exhibitions both in Poland and abroad in the pipeline, the institute – charged with promoting the nation’s cultural heritage abroad – has joined forces with the popular Warsaw-based artist to present a new series of works inspired by elements of Polish culture found in foreign climes. 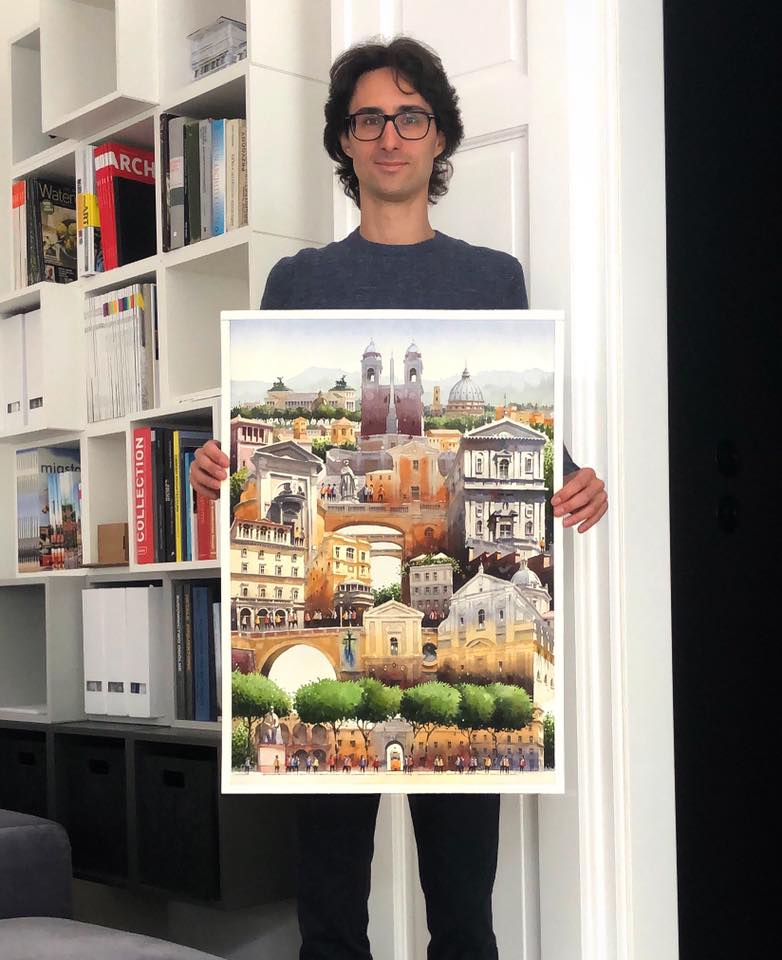 Tasked with preparing 13 paintings of 12 different international cities, Brzozowski has embraced the assignment with typical gusto.

“I collaborated last year with the Polish Tourism Organisation and painted a series of watercolours presenting various different cities around Poland,” he tells TFN, “therefore I’ve seen this latest project as a consistent continuation so enthusiastically accepted the challenge.” 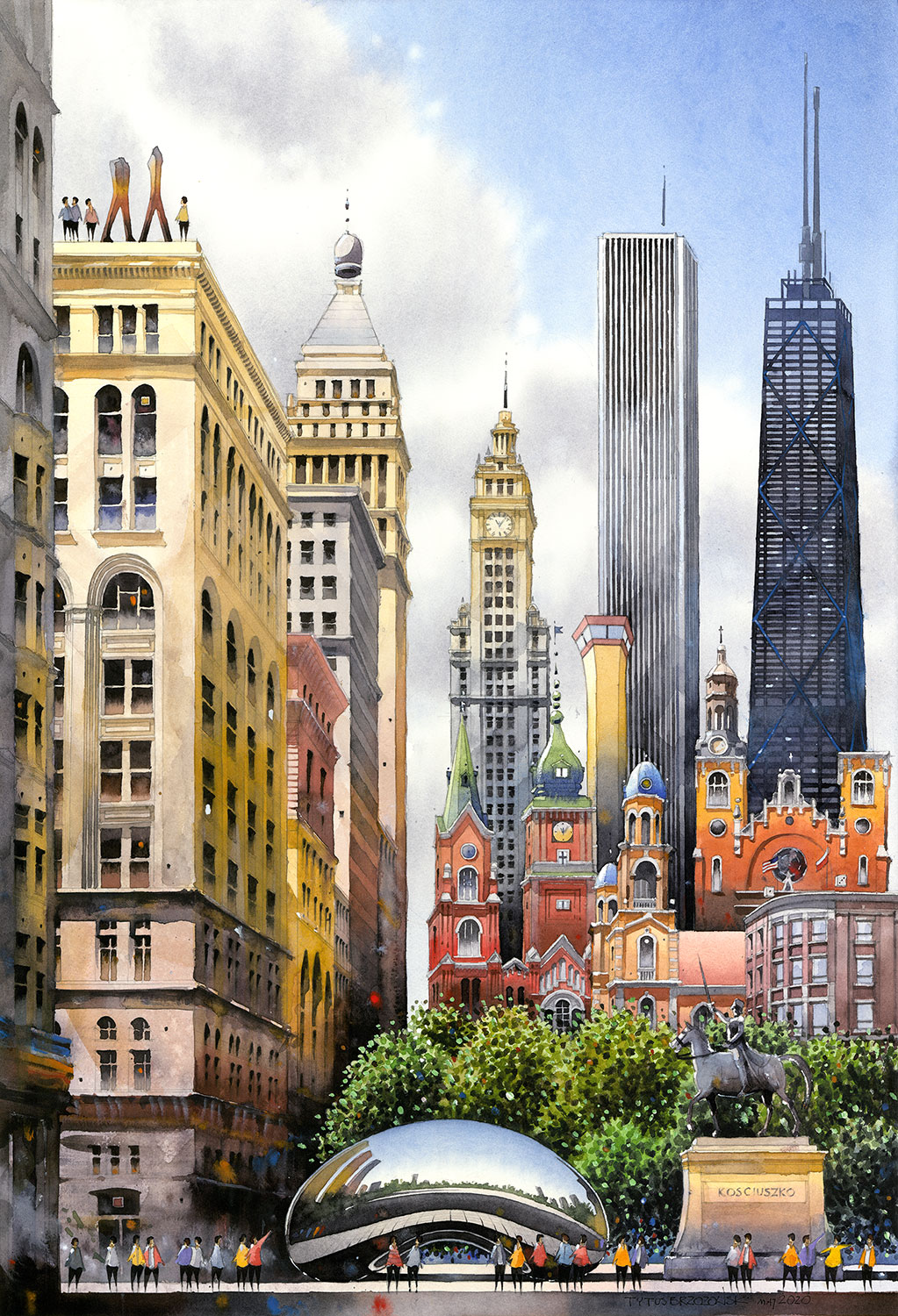 Chicago is one of the paintings from the assignment.Tytus Brzozowski/Facebook

With much of the undertaking still cloaked in secrecy ahead of the big reveal in November, Brzozowski remains contractually tight-lipped regarding the full scope of the project; despite that, early previews of some of his latest work have already been made amid much fanfare.

“I’ve already finished painting five cities,” he says, “Chicago, Rapperswil, Rome, Padova and St. Petersburg, but together with the institute we’ve decided not to show all of them until the premier of the exhibition. Likewise, we don’t want to announce a few of the other cities I’ll paint next as we want to keep it as something of a surprise.” 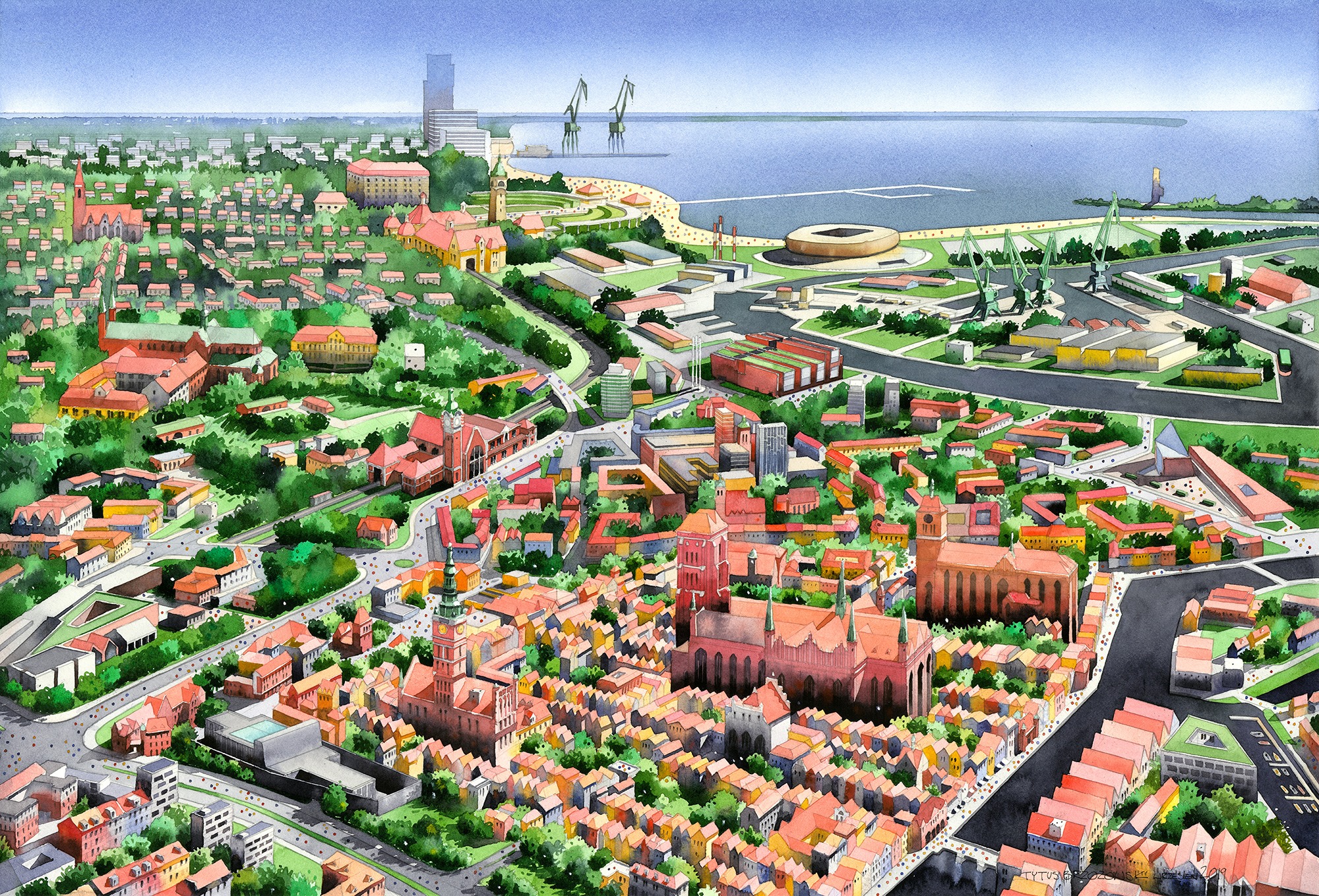 The Tri-city. Brzozowski describes his work as happy and colourful, but also always historically aware.Tytus Brzozowski/Facebook

Already, though, what has been drip fed to the public has caused an internet storm, not least for Brzozowski’s exploration of Poland’s often unknown associations with the cities in question.

“Personally speaking it’s been a fascinating and educational journey for myself,” he says. “Some of the links I discovered really moved my imagination, especially those connected with Warsaw. For example, I was so surprised to learn that the clock tower of Chicago’s Copernicus Centre was a copy of the tower at Warsaw’s own Royal Castle. 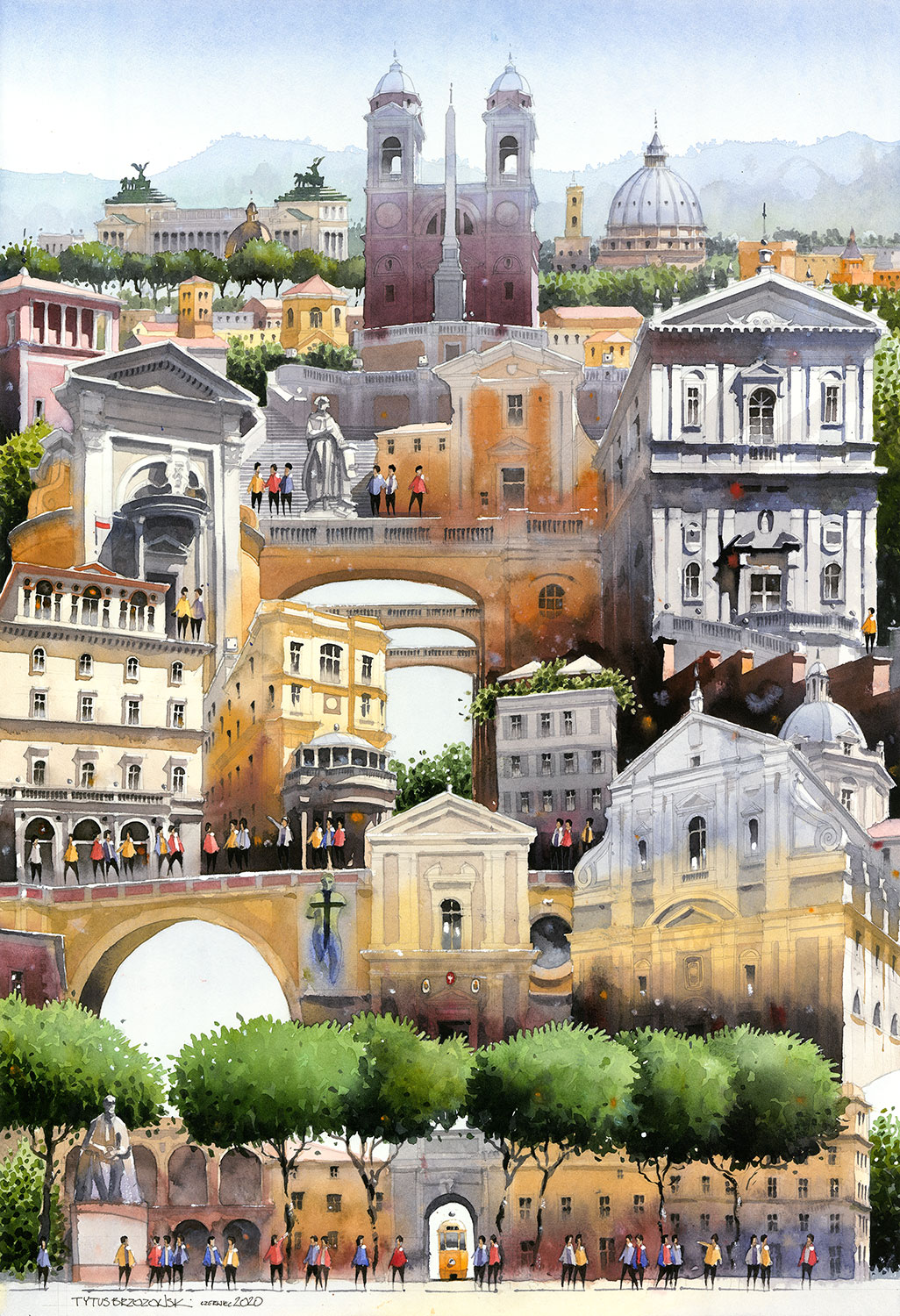 Rome. Because of the pandemic he had to use pictures and even Google Earth to help him get a feel for his subject.Tytus Brzozowski/Facebook

“In Rome, meanwhile, the doors of the Santa Maria degli Angeli Church really caught my attention, and as it transpires the sculptures found there have been replicated on the doors of our own capital’s Jesuit Church.”

These findings, though, have proved the tip of the iceberg. 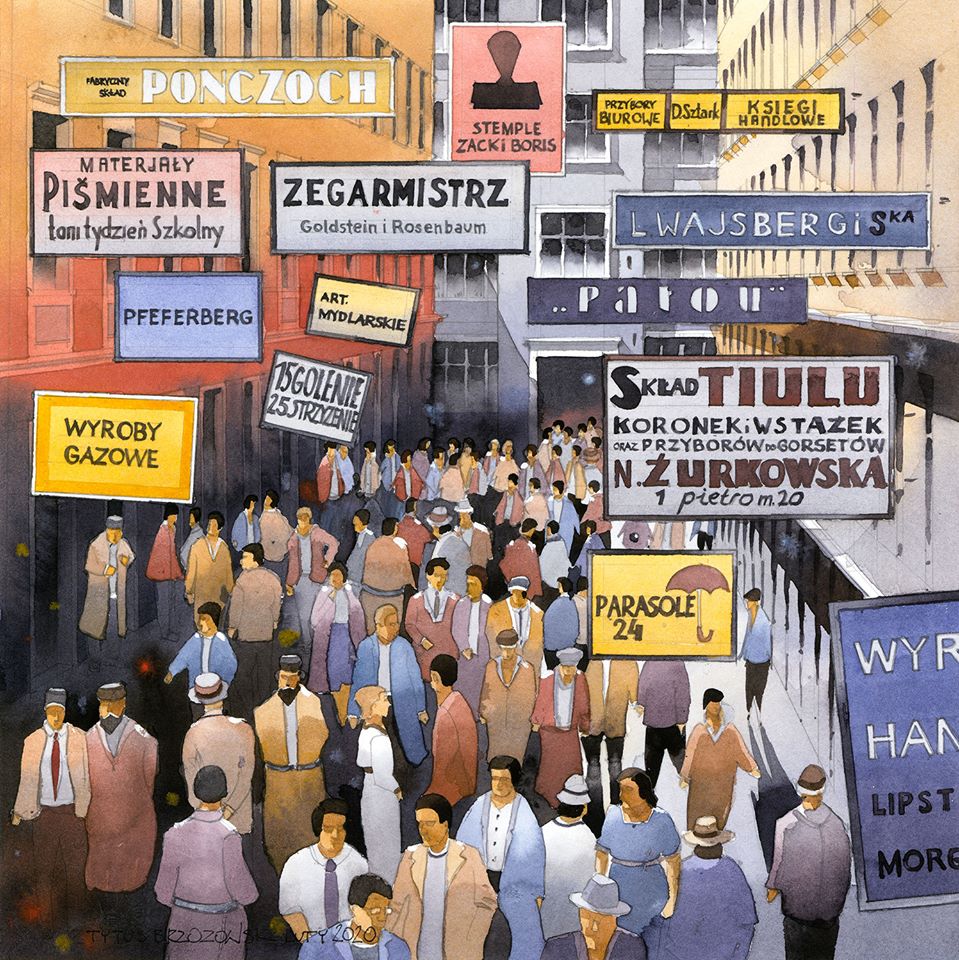 Warsaw’s Nalewki Street. Brzozowski has emerged as one of Poland’s most talked about artistic talents.Tytus Brzozowski/Facebook

“In St. Petersburg, for instance, two quite extraordinary bridges turned out to be designed by Polish civil engineers, while in Padova I learned that over 1,600 Polish doctors hailing from noble ancestry once studied at the university there many, many years ago. And then there’s Rapperswil, where you’ll find the first ever National Museum of Poland (editorial note: founded in 1870). It was just amazing to see this tiny Swiss town enveloped with such a Polish spirit!”

Disrupted by the coronavirus, the background research was by no means straightforward. 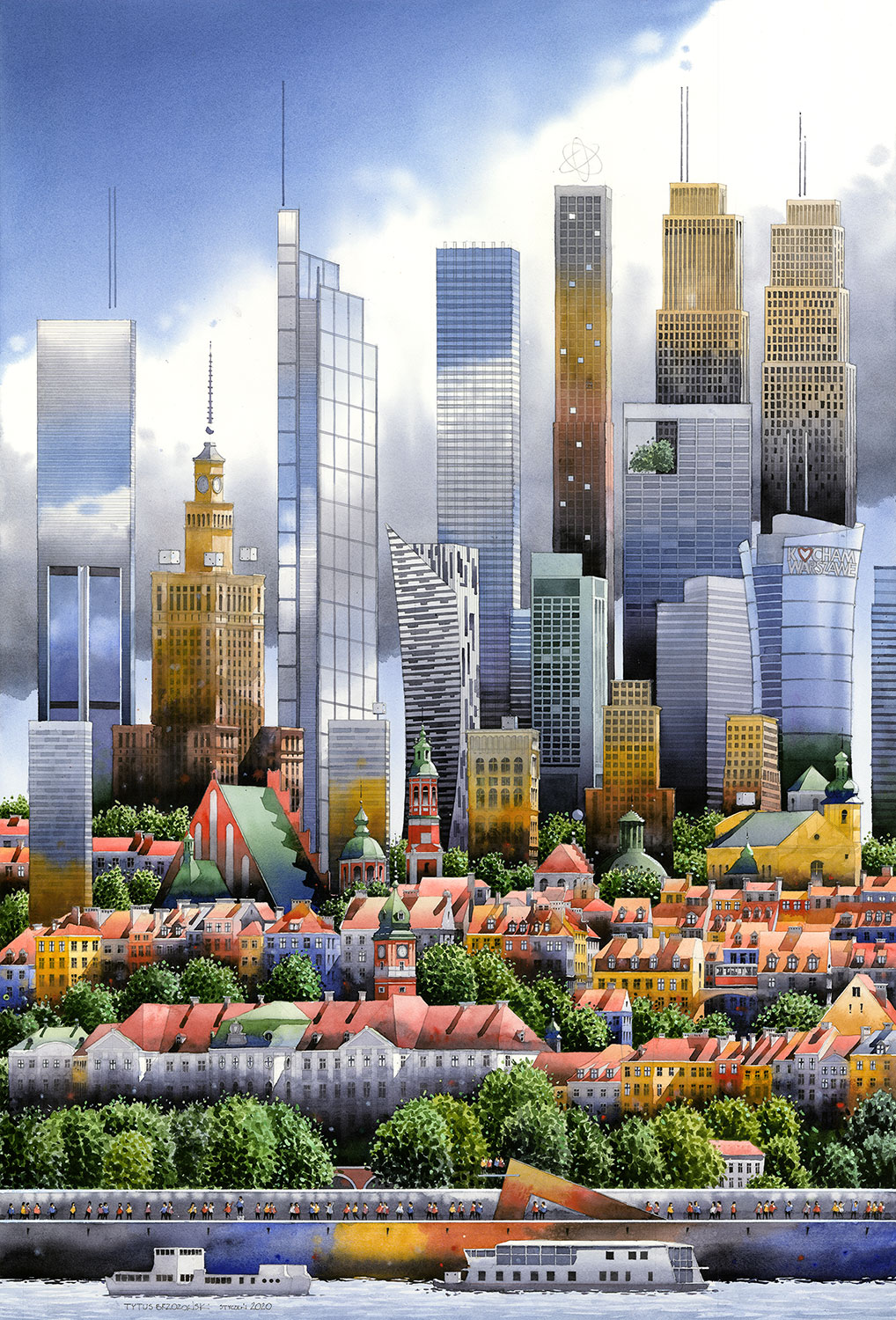 Warsaw-New York. “The idea behind it was to really examine the architectural process that’s happening in Warsaw right now with the city growing taller and taller,” he says.Tytus Brzozowski/Facebook

“Each painting was the result of lots of talks and discussions with the institute’s team with both sides really focusing on spotlighting Polish objects, characters and culture,” says Brzozowski.

“Although I’d visited most of the places before, I had intended to return to them this year before painting them but, obviously, the pandemic put a stop to that – instead, I found myself collecting a huge amount of photographic references and even using Google Maps and Google Street View to ‘get’ everywhere I needed to be.” 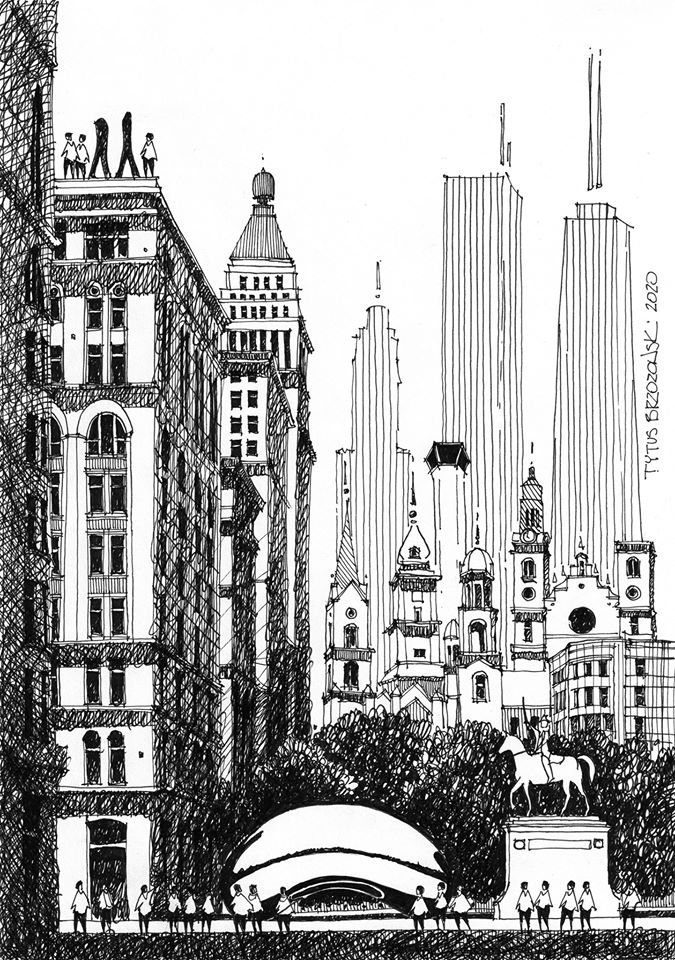 In some regard, this unorthodox approach mirrors the artist’s own unconventional style. Known for his surreal, dream-like depictions of cityscapes, Brzozowski’s portfolio bristles with a fantastical magic that has seduced an army of followers on account of its enchanting and often witty qualities.

“In most of my paintings I combine buildings from different places to create a totally new space,” he says, “but I still like to keep the mood of that particular city. That’s precisely what I am doing this time around as well. 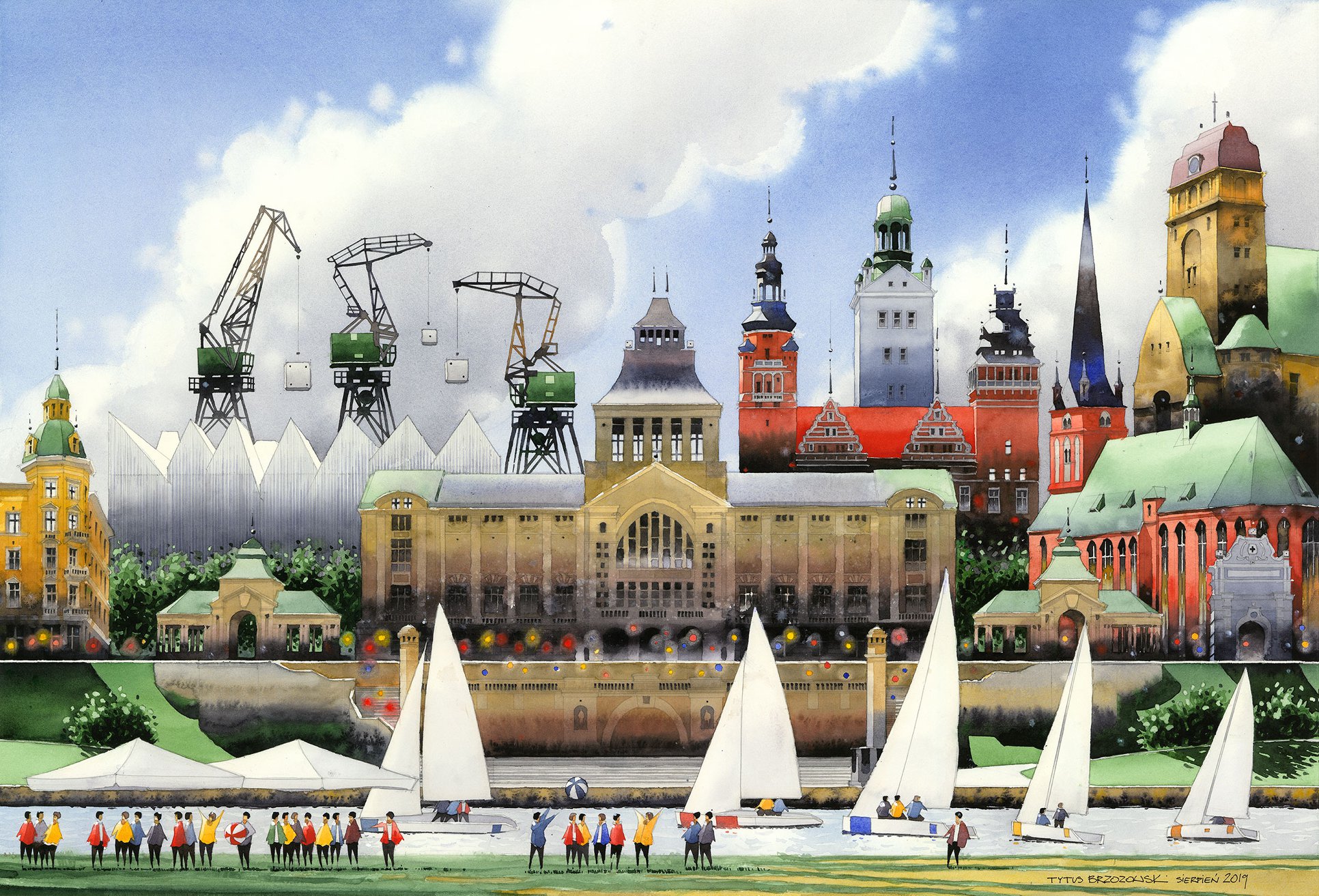 “In the course of this I’ve sought the character of the spot using the most significant buildings for the image of the city and added elements that are important for Polish culture. Secondly, like I’ve always enjoyed doing, I’ve added people as I love lively, bustling cities. And last, but definitely not least, I’ve of course included small surrealistic details that are hidden here and there.”

Describing his work as happy and colourful, but also always historically aware, Brzozwski’s style is both formulaic yet also strikingly unique, never failing to intrigue viewers with its compelling, complex imagery and rich sense of fun. 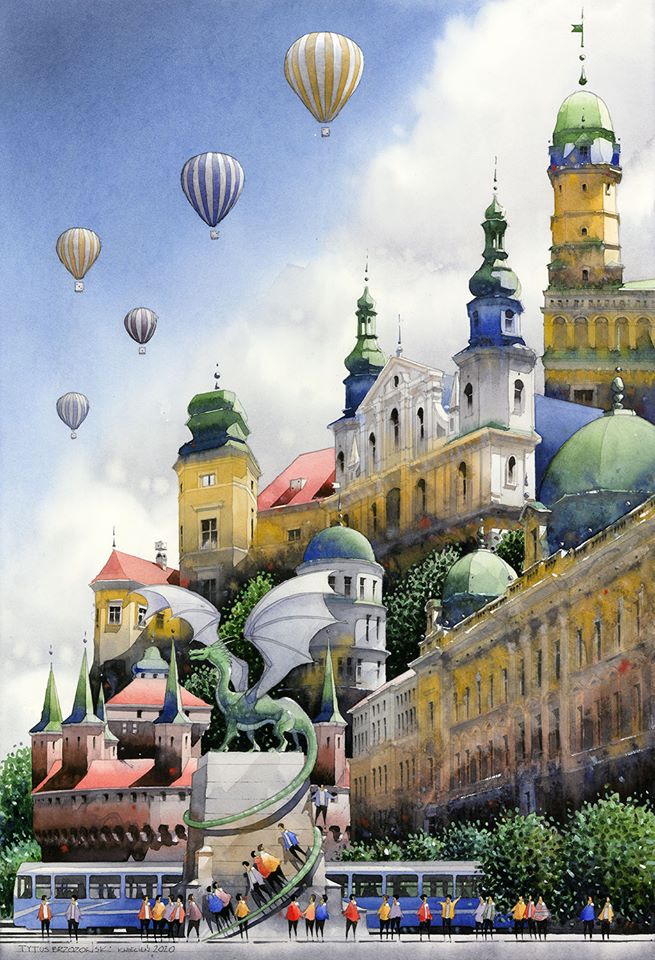 “The process begins with hundreds of fast sketches,” he says of his technique. “These early images are very quick and pretty incomprehensible for others but it’s my own language that I use to find the idea and the composition. At the end, I prepare the final black and white drawing on an A4 piece of paper and from that moment onwards the layout of buildings and the shading will not change.

“The next step is to prepare a drawing on the final, large sheet of paper – in this case, 73x50cm. I use hard pencil and it’s quite a laborious process but the final, and most important and satisfying part is adding the colours. That’s when the mood of the painting is formed.”

Having gone viral globally several times over, Brzozowski has emerged as one of Poland’s most talked about artistic talents and aside from his current project, recent plaudits have centred around his reimagining of Warsaw as a New York-style megalopolis of impossible never-ending towers. 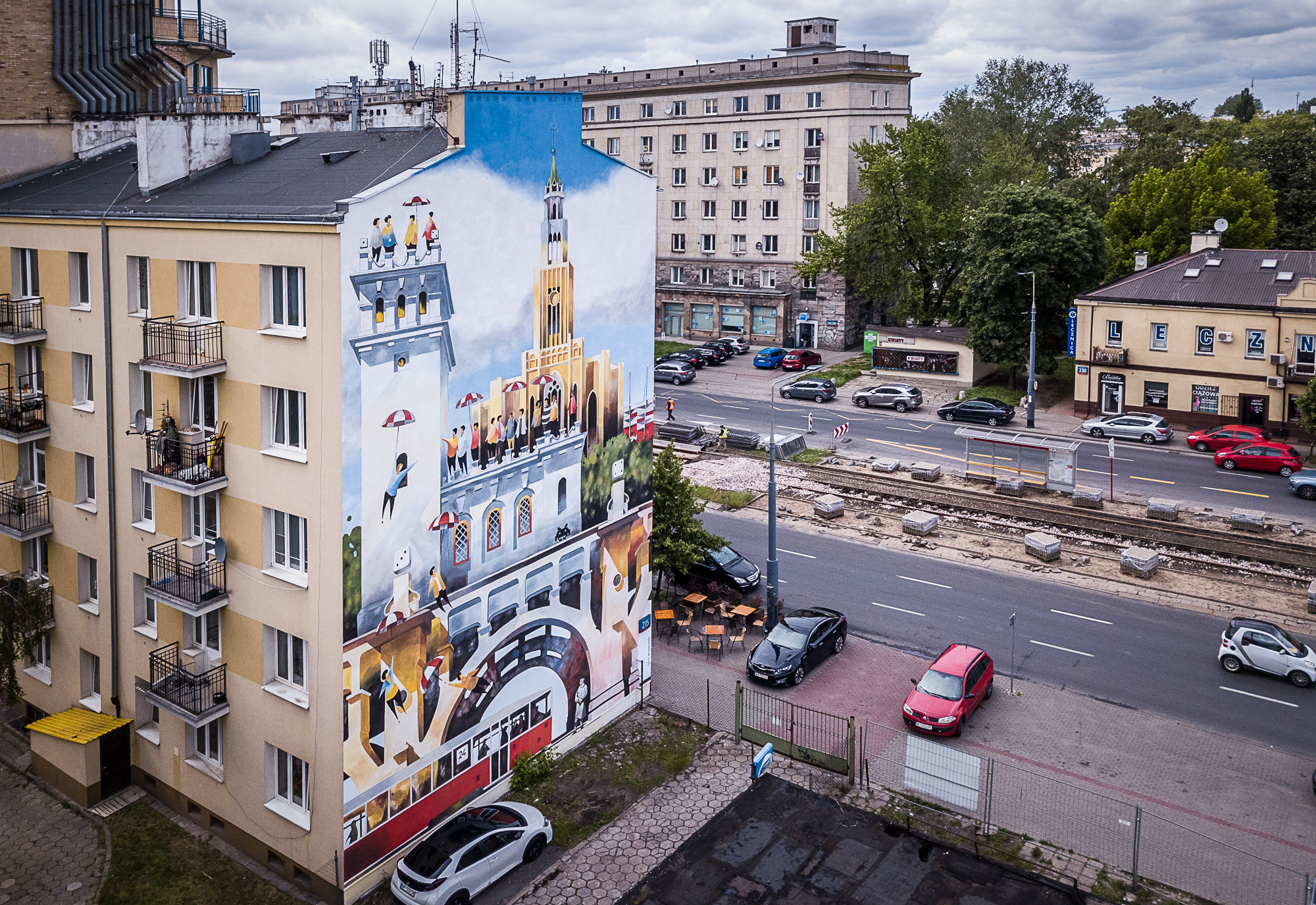 A host of large scale murals designed by the artist have sprung up.Kalbar/TFN

“I think that NY – Warsaw would be my most discussed painting of the last few months,” he says. “The idea behind it was to really examine the architectural process that’s happening in Warsaw right now with the city growing taller and taller – as it is, right now we’ll very soon have a building higher than the Palace of Culture & Science and I wanted to show a future where a city is full of those kind of structures – that’s why I painted imaginary high rises twice as big as those that already exist.”

But Brzozowski’s own future is every inch as exciting as the cities he paints – whilst watercolours remain his primary form of expression, a host of large scale murals designed by the artist have already sprung up and yet more, he says, are on the way.

Simultaneously as thrilling as they are uplifting, that Brzozowski’s paintings are reaching an audience bigger than ever before can be interpreted as the ultimate testament to a man that has become not just the artist of now, but the artist of tomorrow as well.