When planning trips around Poland – whether it be for work or otherwise – I religiously place my faith into a programme I like to enigmatically call The Matrix.

For the sake of disclosure, this complex instrument is, in all actuality, simply what everyone else refers to as Google. But it’s my lifesaver, thanks largely to its uncanny ability to seek out everything I require to make a booking: and boy, that’s quite a list. From the top (and excluding the things liable to get me fired or arrested), these include a castle; a river and / or lake, a ghost, craft beer, World War II ‘things’ and an old town square. Tykocin, so said The Matrix, offered all these.

Travelling from Białystok, the nearest big city, the journey is typical of cross-country Poland at the height of summer: all featureless fields the colour of emerald and white-knuckle scrapes with thundering lorries. Then, just as you’ve resigned yourself to dying on a distant Polish highway, she comes into view: Zamek Tykocin. As castles go, she’s a strange one alright. Dominating the skyline with her redbrick contours, she looks grand and imperious yet also… brand new. And yes, she is indeed.

Originally built in the 15th century for a Lithuanian nobleman, the following centuries saw the castle hit a run of startling misfortune: sieges, fires and floods all visited and left the Zamek a skeletal set of ruins. When WWI broke out, what bits remained were demolished by German soldiers and carried off to pave roads.

There the story should have ended, instead it was just the beginning. Based on plans discovered in a St. Petersburg archive, Białystok businessman Jacek Nazarko funded a reconstruction of the castle with the cornerstone laid in 2002. “There were times,” says Nazarko, “that I regretted getting involved – I took out loans and sold possessions: a holiday home in Krynica, a boat, a vintage car – but never did I think that it wouldn’t be finished.”

Naturally, modifications have been made. Ceilings, for example, are taller than they would have been, a necessity given mankind’s physical growth and development. But where possible original details, such as an excavated well or a rediscovered hinge, have been restored or incorporated. Officially reopened in 2011 (though still very much a work in progress), features include the largest tiled stove in the country, an observation point in the prison tower as well as the expected presentation of ducal clothing and gleaming sabres. 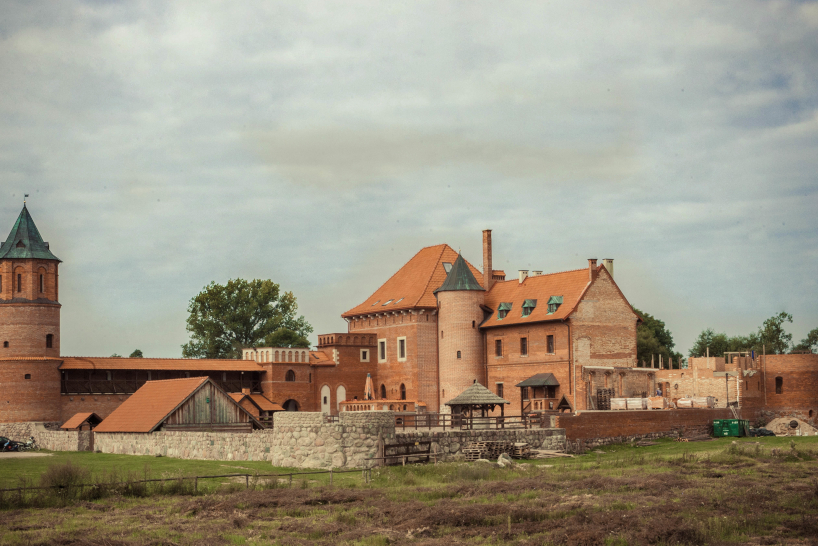 Zamek Tykocin: King Zygmunt August kept his library in the Zamek and it was also here that Poland’s highest decoration – the Order of the White Eagle – was first awarded back in 1705.
(The First News)

There’s a hotel here, as well, and while the accommodation feels disappointingly bland, there’s no escaping that vicarious thrill of staying in a castle. New or not, things happened here: King Zygmunt August kept his library in the Zamek (his body, incidentally, was stored in the basement for over a year before its proper burial), and it was also here that Poland’s highest decoration – the Order of the White Eagle – was first awarded back in 1705. With such a storied past, it’s unsurprising that ghouls and spirits roam freely at night: one more recent guest, it is claimed, ran screaming into the corridor after seeing Queen Barbara Radziwiłł appear in his bathroom.

Unfortunately, the only thing appearing in my bathroom is a spider the size of a donut, but that’s more than enough to send me scooting outdoors and exploring yonder. Crossing the River Narew via an arched steel bridge, my route passes the Alumnat, a riverbank building that is thought to have been the world’s first hospice for veteran troops. Established in 1633, today it fills a more standard function as a pierogi-serving restaurant, as well as an occasional filmset for the kind of Polish comedy capers we’ll never understand.

A small settlement of 2,000 people, Tykocin is easily digestible in the space of the day. That much is clear stepping out onto the rectangular Rynek. Framed by neat, pre-war wooden bungalows with blooming gardens and outdoor shrines, it’s as pretty as a postcard but also as quiet. It’s Friday afternoon, but the only sound comes from the distant congregation inside the baroque monastic complex at the top of the square.

Then, out of nowhere, some action! Rounding a corner the fire brigade’s marching band bounces into view parping jolly tunes into trumpets and tubas. Adding an almost Blackadder-style twist to the occasion, they’re ably accompanied by a menial member tinkling on a triangle. It’s the most exciting thing that’s happened all day, and a trickle of people emerge from their homes to wave their appreciation. It’s a surreal, dreamlike interlude, and within minutes I’m back on my own wondering if I hadn’t just imagined the whole damned charade. 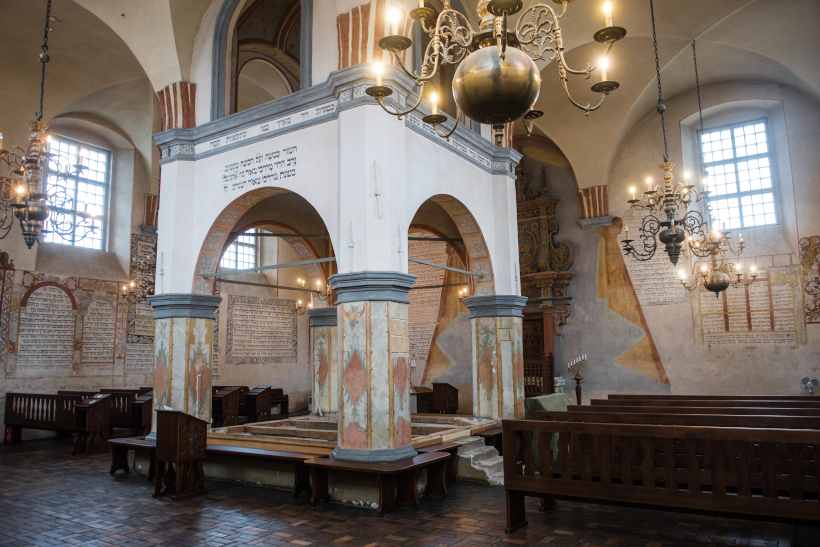 Recognized as one of the finest surviving synagogues in Poland, nowadays its restored interior houses a spectacular bimah and a compelling exhibition that tells the story of Tykocin’s Jews.
(The First News)

Moving onwards, I’m surprised to see a sleek coach with Warsaw plates mounting the pavement with a satisfied hump. Intrigued, I follow its passengers as they disembark and file inside what transpires to be the town’s 17th century synagogue. Recognized as one of the finest surviving synagogues in Poland, nowadays its restored interior houses a spectacular bimah and a compelling exhibition that tells the story of Tykocin’s Jews. Murdered in the nearby forests by the Nazis, at a stroke the town lost half its population. Back outside, walking the empty streets, you get the idea Tykocin’s never truly recovered.

With Jews making up half of the town’s pre-war census, the synagogue is not the only point of interest on the heritage trail. Set on the very fringe of town sits the cemetery, now more a wild, windblown field scattered with tombstones twisted by time. With the lion’s share of graves utilized to satisfy the German compulsion of making roads from historic objects, only a sprinkling have survived to poke from the grass. Walking among them, one can’t help but feel profoundly moved, as if the emptiness and silence is a metaphorical comment on the Holocaust’s impact. 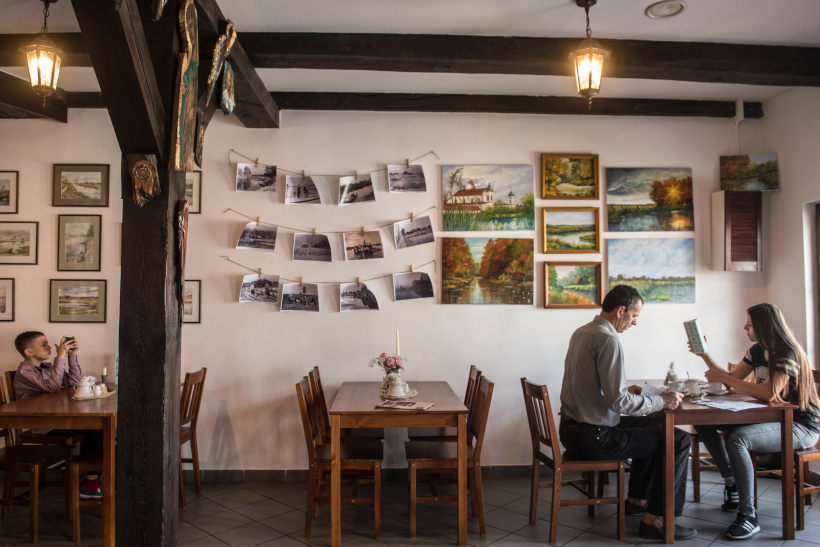 The tiny Rynek tavern named Opowieści z Narwi. Decorated with art and trinkets of questionable value, it’s nonetheless exactly the sit-down you need - and they have craft beer.
(The First News)

Spirits dampened, it’s in this reflective mood I trudge back to town. A beer would be great. Tykocin, mind you, is not the place to have one. Once upon time, town records show that when Zygmunt August was staying locally the town touted ten inns selling mead, 15 dealing vodka and a further 36 specializing in beer. Today, good luck. But not all hope is lost, and complete dejection is kept at bay by the discovery of a tiny Rynek tavern named Opowieści z Narwi. Decorated with art and trinkets of questionable value, it’s nonetheless exactly the sit-down that the moment demands. More importantly, they have craft beer, a well-received Godsend in provincial Poland. Taking a long well-earned glug under skies streaked in crimson, I ponder The Matrix and its infallible powers.

Twenty-five detained after incidents at LGBT march in Białystok