Ticket to ride: a journey around the globe to discover the fascinating legacy of L. L. Zamenhof, the Polish Jewish creator of the Esperanto language

A Catalonian street, a German city, a Brazilian orphanage, an Antarctic island and the Themistian asteroid are just a handful of the hundreds and hundreds of things named after Zamenhof or his brainchild the Esperanto language.

In fact, there is so many of them that they have even gained their own special name, the acronym ZEO, meaning Zamenhof Esperanto Object. ZEO’s are spread around the globe – it can be an old tree hidden somewhere in a park in Hungary, or a dusted stone with green star painted on it  – a symbol of Esperanto Movement – in a remote South American hamlet.

“My task is to gather and catalogue information on every single ZEO on planet earth,” explains Robert Kamiński, an Esperanto expert, in an exclusive interview with TFN. “I was appointed to do this by the Universal Esperanto Association, which has its headquarters in Rotterdam.

“There is no two ways about: all Esperanto roads lead to Białystok,” he adds.

In the 1850s Białystok, located in the north-east of what is now Poland but was then Russia, was a real melting pot of ethnicities. At that time the predominant population were the town’s Jews, who lived along Roman Catholic Poles and Eastern Orthodox Russians. In addition there were also a significant number of Belarusians and Germans and some other, smaller minorities, like Tatars or Ukrainians. And, which is of the great significance to our story, each of the ethnic group uses their own separate language. 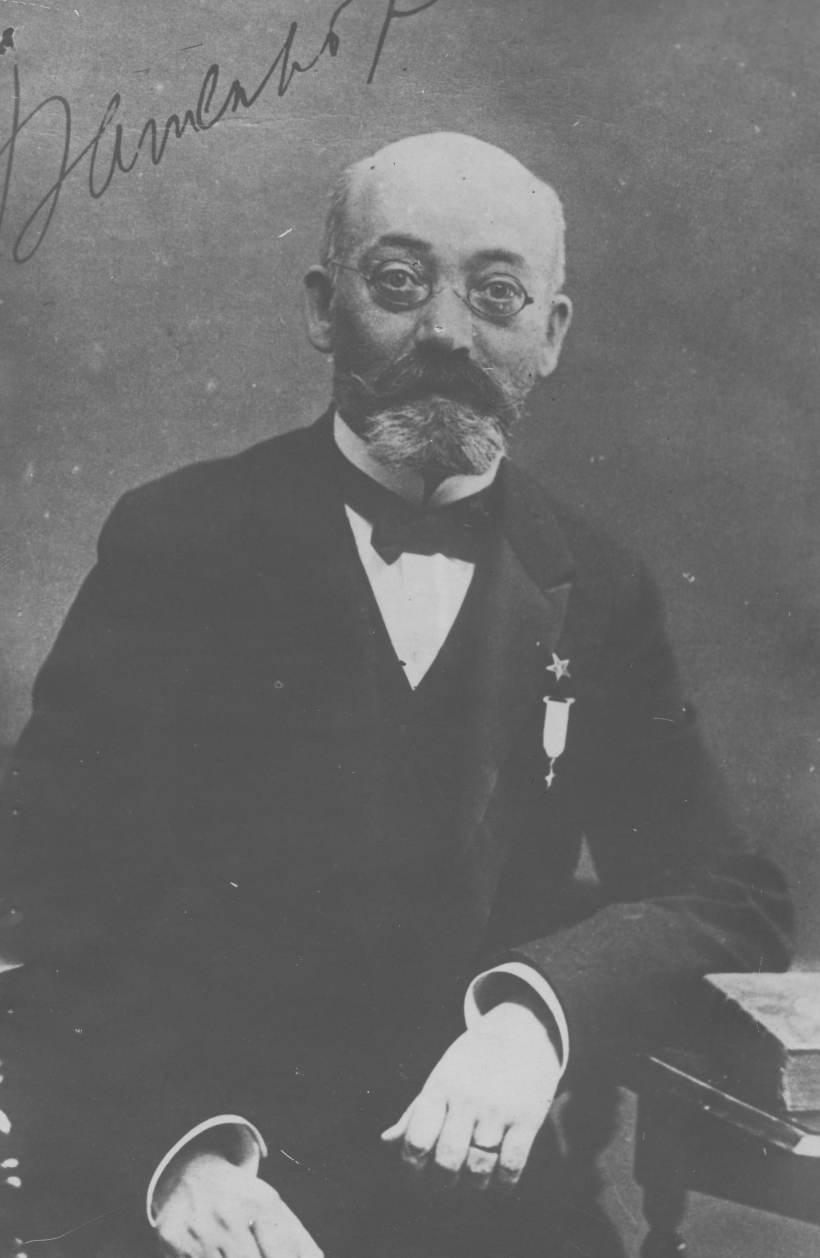 Ludwik Lejzer Zamenhof (1859-1917), the creator of Esperanto, the most successful constructed language in the world.NAC

Right in the middle of this multi-ethnic diversity, on December 15, 1859, Ludwik Lejzer Zamenhof was born. Growing up in such an environment, he was destined to be multilingual. Natively bilingual in Yiddish and Russian, he quickly learnt Polish. His father, a teacher of German and French, taught him those two additional languages. And all of that even before the little Zamenhof started his formal education. He would later learn Latin, Greek, Hebrew, and Aramaic.

Now there are few traces of Zamenhof’s childhood in the city.

“Unfortunately, the old wooden house, were Dr. Esperanto was born, doesn’t exist nowadays,” explains Kamiński. “But the very place of Zamenhof's birth is marked very precisely. It is an obligatory must see for every Esperantist visiting Poland. If there is any meeting, be it in Warsaw or in Gdańsk, there is always a one-day trip by bus to the city of Białystok to see the place, were Zamenhof was born. A place which is so dear to all of us. 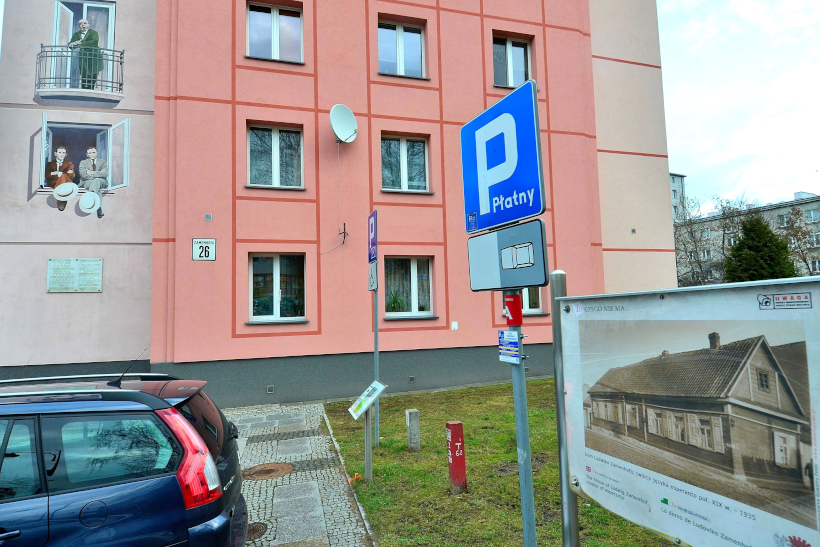 Zamenhof Street in Białystok, the exact place were the creator of Esperanto was born.Adrian Grycuk / Wikipedia / Wikimedia Commons

“There is also a monument to Zamenhof in Białystok, where official ceremonies often take place,” je add. “And, last but not least, there is the Ludwik Zamenhof Centre. On the one hand, it serves as a museum. Here, a visitor can visit the permanent exhibition entitled ‘The Białystok of Young Zamenhof’, and learn interesting facts about the life and work of Ludwik Zamenhof. On the other hand Ludwik Zamenhof Centre is an educational point. There is an Esperanto Library, established in 2010, which is, by the way, the first public library in Poland that has a collection in Esperanto and publications devoted to this language.” 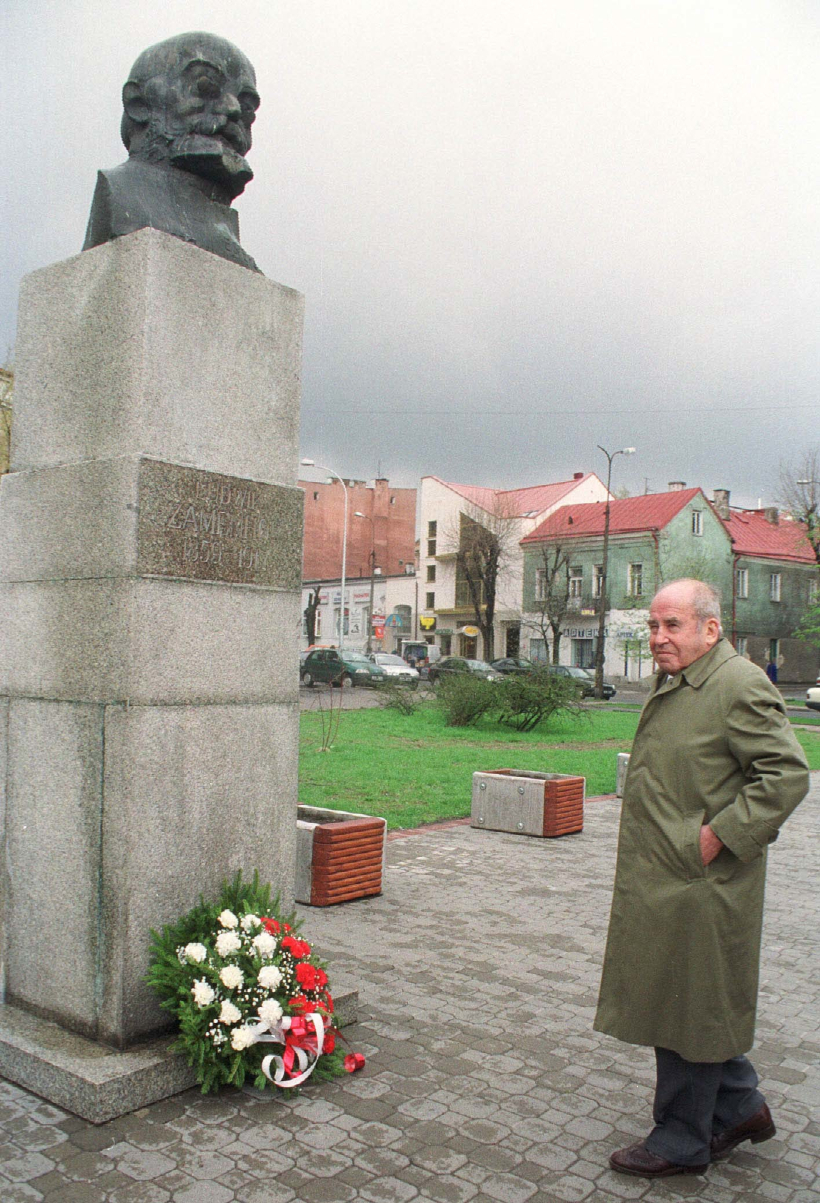 In Warsaw, people can spot buses with the word “Esperanto” on their destination board. The reason for this is simple: there is a bus depot in the western part of the city, located on Esperanto Street, and several bus routes start and end there. But, at the same time, for Esperanto language users and enthusiasts, it became an involuntary, yet important, ZEO.

“I am always joking that public transport in Warsaw provides us with free advertising,” says Kamiński.

Ludwik Zamenhof moved with his family to Warsaw as a teenager, to finish his secondary school. And when still being a pupil he created in 1878, the first version of his language. This first attempt was imperfect, but it was a milestone in the creation of the final version. At the time, Zamenhof was too young to publish his work. Instead of spreading his “beta version” of his brainchild, he began to study medicine, first in Moscow, and later in Warsaw, to become an ophthalmologist. But while learning how to be a doctor, he was still working on a refined version of the international language. Finally, in 1887, in printing house at the 11 Nowolipie Street in Warsaw, a small book was published. The first edition of Esperanto textbook. 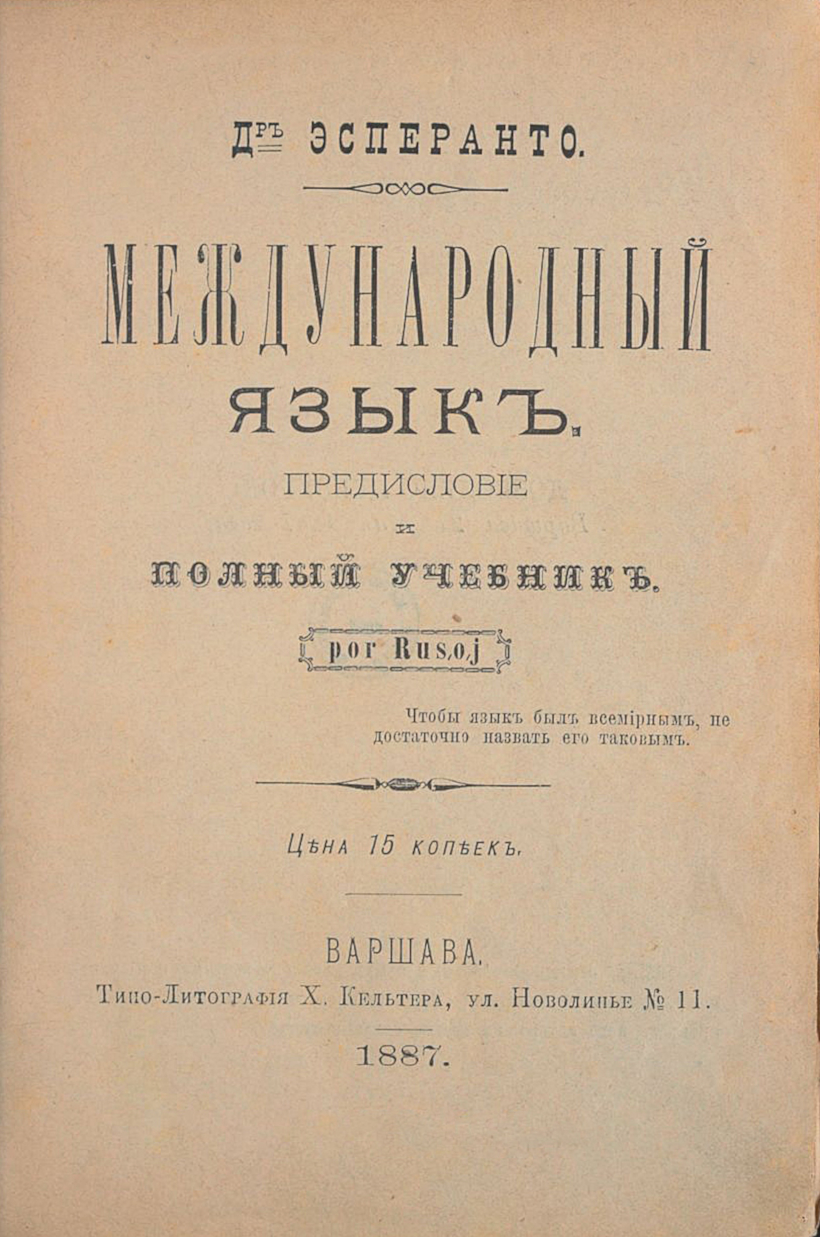 “Białystok was a place where Zamenhof himself was born, but it was Warsaw when the mature version of Esperanto came to light,” emphasizes Kamiński.

So what is Esperanto all about? It is a language based on the Indo-European languages spoken in Europe, and kind of mixture of Slavic, Romance and German languages. It means that when you start to learn it you are immediately familiar with a good part of vocabulary, wherever you are a Russian, Spaniard or Norwegian. The grammar is extremely simply and logical.

As far as English speakers are concerned, it is said that for them Esperanto is five times as easy to learn as French or Spanish, nearly 10 times as easier that Russian and 20 times easier than Arabic. In other words, it is hands down the easiest language to learn.

But let’s get back to our route. There is one more reason why Warsaw is so dear to all Zamenhof followers: it was here, where the Esperanto creator died, on April 17, 1917, and lies buried in the Jewish Cemetery. 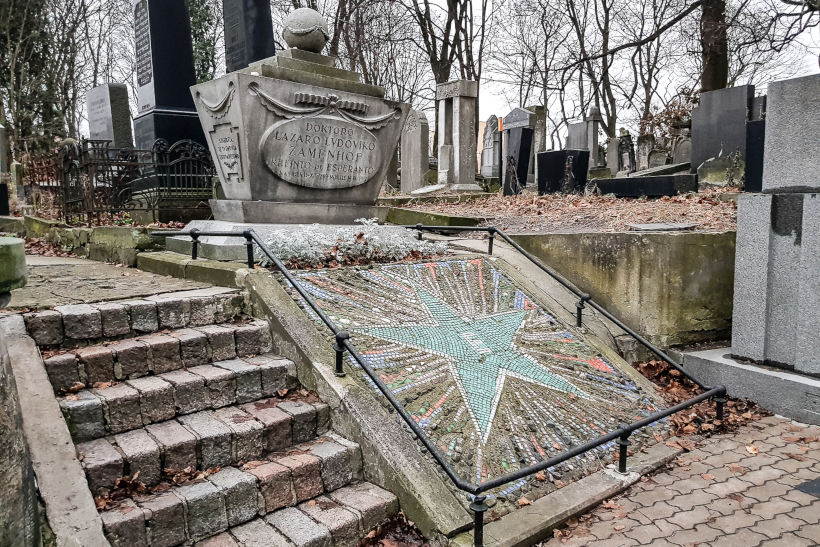 “Unquestionably, Zamenhof’s grave is a real Mecca for Esperantists from around the world,” states Robert Kamiński. “The Esperanto community takes special care of it. Especially because the tomb is located on a little slope and there is a danger that it might tilt too much and fall over. But we believe that, along with together with the cemetery authorities, we will fix it quickly.”

It is also worth mentioning that those people, who cherished world peace and understanding between different people, were seen as a threat to totalitarian regimes such as Nazism and Stalinism. As a symbolic example of the persecution of Esperantists under murderous regime is the fate of Lidia Zamenhof, Ludwik’s youngest daughter. A devoted follower of her father’s ideas she wanted to share the knowledge of the language, and went to the United States in 1937. But the year later she had to leave after the US Immigration Service declined to extend her tourist’s visa because of her allegedly illegal “paid labour”, which was giving Esperanto lessons. She returned to Poland, and when the WWII broke out she found herself imprisoned in the Warsaw Ghetto, and was later murdered at Treblinka in 1942. 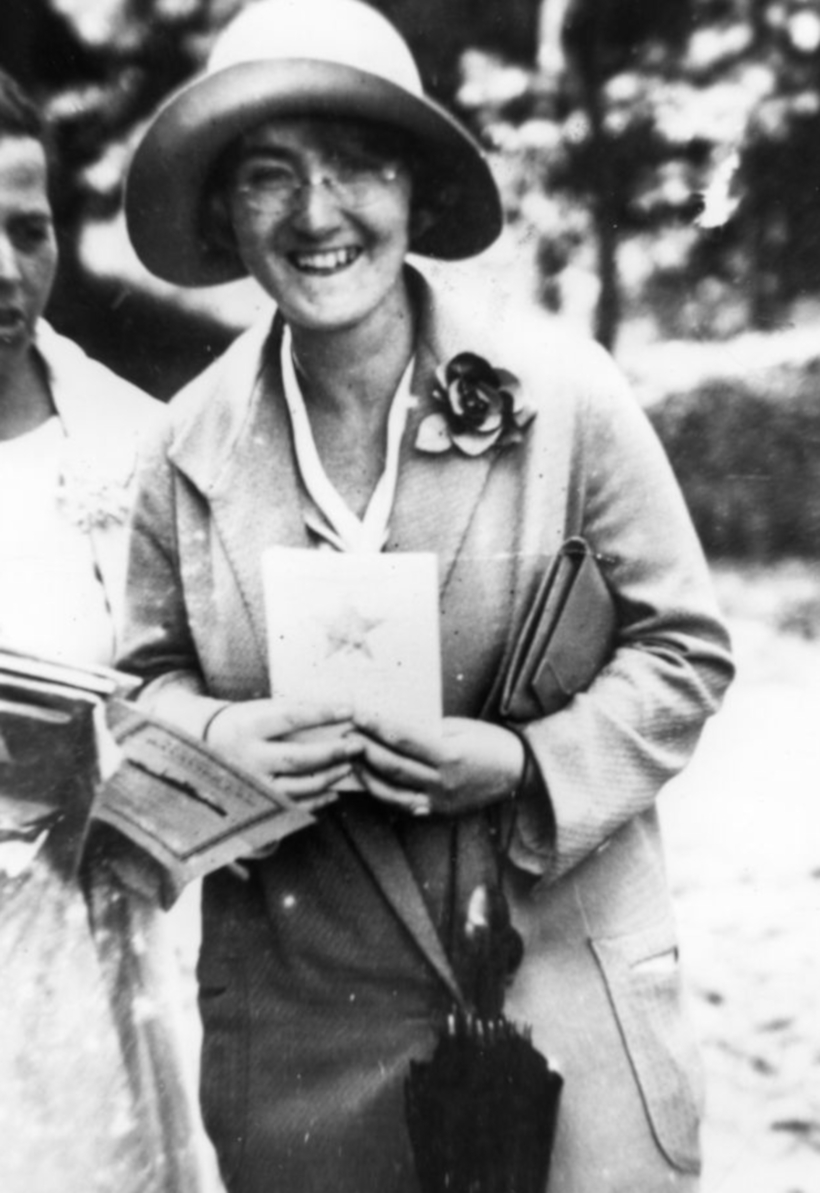 Despite the murder of Esperanto speakers during WWII, and English becoming the world’s language Esperanto survived. There are estimated 2 million users nowadays, which may not be a thrilling number, but speaking this artificial language gives it’s users an extra value.

“Perhaps the most important thing that language gives you is that you stop feeling any kind of inferiority complex,” admits Kamiński. “Let me explain to you this way: when you start to learn English you know that there are millions of millions of other people who are better at English than you, simply because they were born in English-speaking countries. No matter what you do – they are better, you are worst. While as far as Esperanto is concerned, we are all equal. Everyone has to learn it from the scratch, everyone knows exactly how much effort must be given to master the language and it results in a situation that we naturally respect each other for what we have achieved, not for where or who we were born. 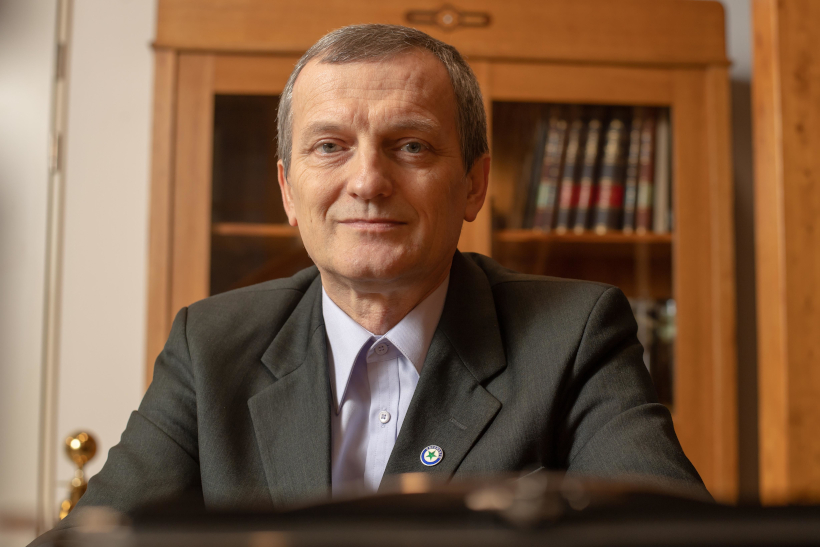 ‘Speaking in plain English: while improving our Esperanto skills, we are becoming more open, and less prejudiced. We know, we feel very deeply, that we are not worst, nor better, that people from Iran, Romania, USA or Japan’ – says Polish Esperantist Robert Kamiński.Grzegorz Michałowski/PAP

“Speaking in plain English: while improving our Esperanto skills, we are becoming more open, and less prejudiced. We know, we feel very deeply, that we are no worse or better than people from Iran, Romania, USA or Japan.”

Since Kamiński mentioned some places outside Poland, it is worth taking the opportunity to take a closer look at examples of areas influenced by Esperanto culture. But this time is not about commemorative plate or gravestone. It’s about a city. 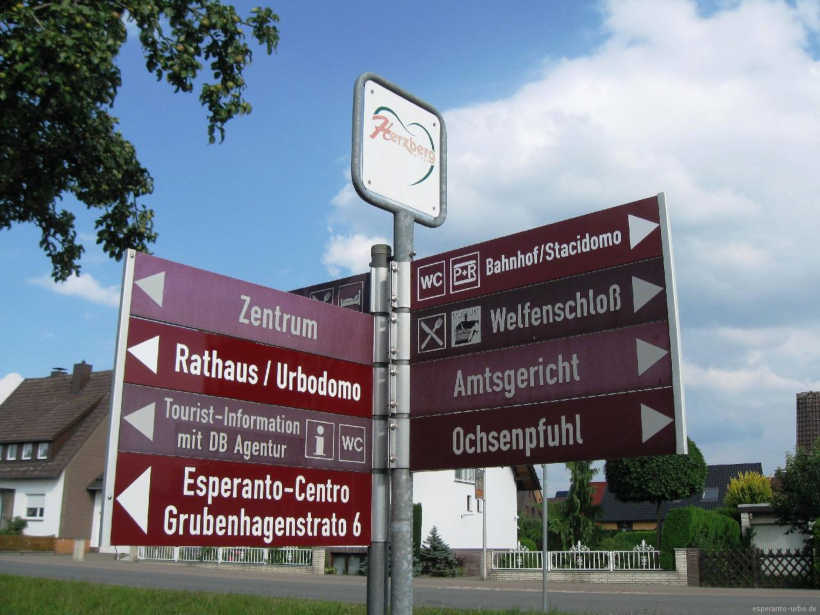 Bilingual singposts in Herzberg am Harz, written both in German and Esperanto.esperanto-urbo.de

Until 2006, Herzberg am Harz was a rather sleepy German town located in Lower Saxony. That year local authorities decided to take a bold step and announced Herzberg a City of Esperanto, Esperanto-urbo. They made Zamenhof’s language a second official language in the town and now it is second obligatory language taught in the town’s schools, and the new signposts appeared, both in German and Esperanto. And a local cultural centre started to promote Esperanto. The result? Since the shift to Esperanto the town has been visited by tens of thousands of guests from over 50 countries around the world, which has benefited the local community.

But Esperanto’s influence extends beyond Europe.

“Well, if you pay close attention to the statistic that I maintain, you could easily see that there is one non-European country that leads in the rankings. It’s Brazil,” explains Kamiński, adding the country has an Esperanto orphanage. 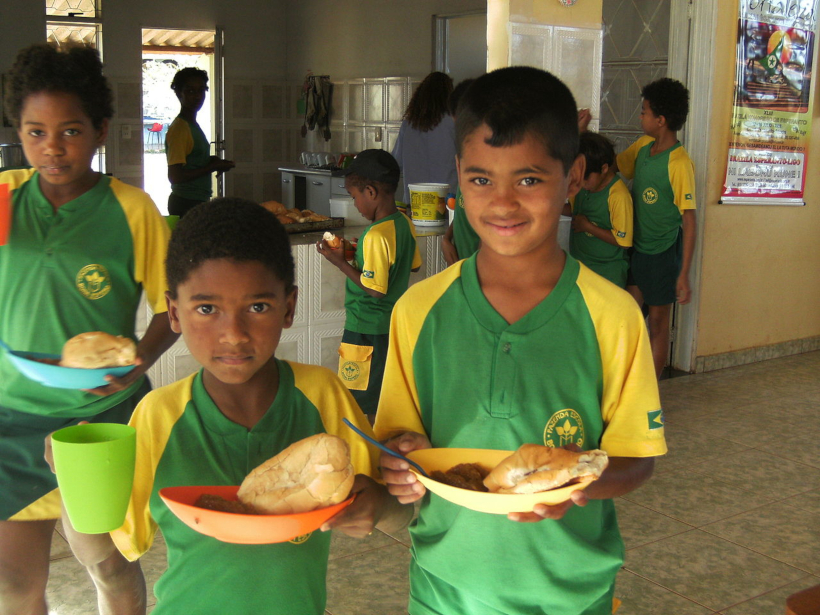 “It was established more than 60 years ago in what was then a rather poor region of the country,” he says. “A pair of European Esperantist went there and found out there were a great number of children in extreme need, starving and homeless. So first they decided to create an orphanage, to save their lives, and later a school, to help them during their adulthood. Children were taught Portuguese and, to help them to communicate with outside world, Esperanto. They called it ‘Bona Espero’, which means in English Good Hope,’ and indeed, it became the only source of hope for countless children during long decades.”

Few doubt, that Doctor Zamenhof, the Polish- Jewish physician would be happy knowing his linguistic ideas helped save poor children on the other side of the globe. And, possibly, he would also be amused by the fact, that in modern Warsaw, his second hometown, there is a bicycle sharing system, extremely popular among Warsaw citizens. Not only because cycling makes people healthier. But also because the name of this system is Veturilo, which is an Esperanto word for vehicle. 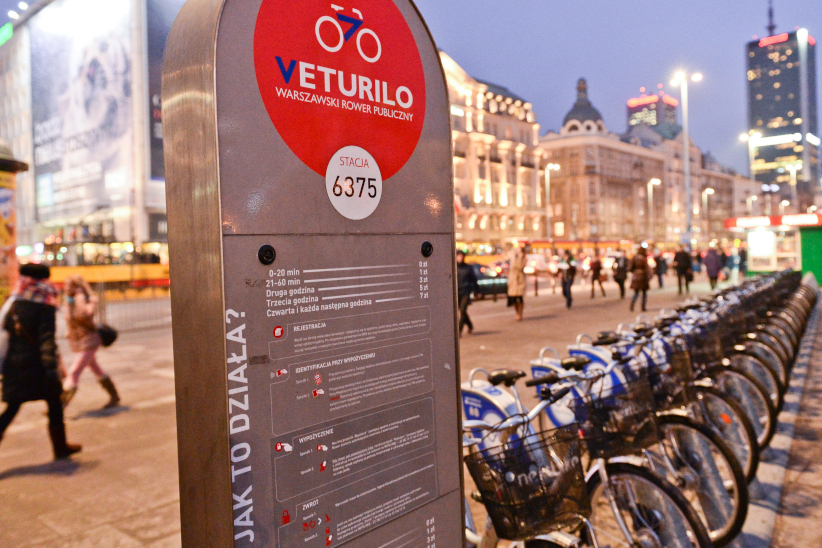 Veturilo is a public bicycle sharing system in Warsaw established in 2012. Since then, the name, which was chosen in an internet contest, became a household name among inhabitants of the Polish capital. Veturilo is an Esperanto word meaning vehicle.Marcin Obara/PAP