History has been made.

Written off at the beginning of the season as rank outsiders, Piast Gliwice have torn up the form book to clinch the Polish league title for the first time in their 74-year history.

With Lechia Gdańsk and Legia Warszawa duelling it out for top spot for much of the season, the inconsistent form and late stutters of both allowed the unfancied Silesian club to creep up almost unnoticed to claim top spot after a remarkable run that saw the minnows chalk up 13 wins from their last 16 games. 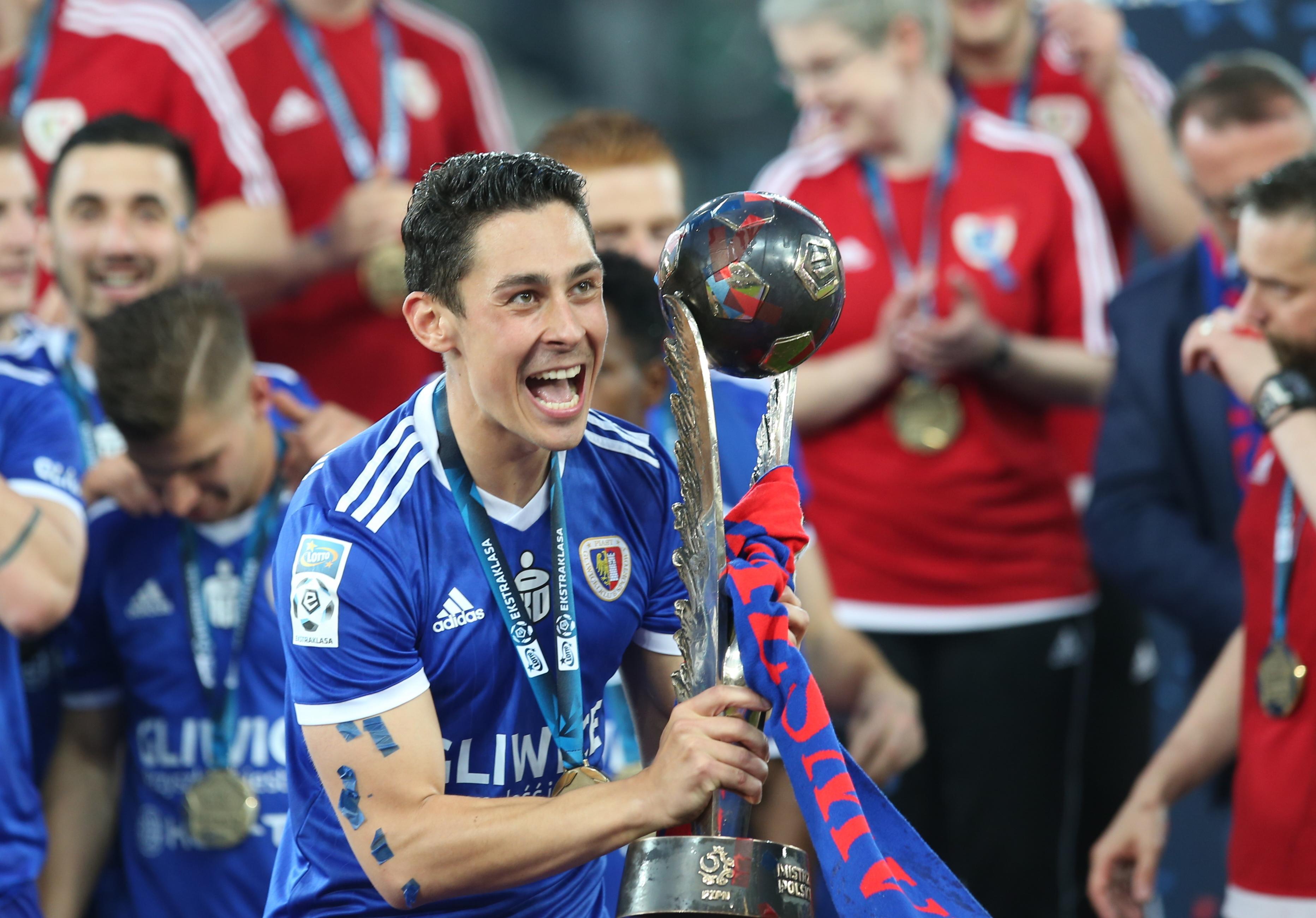 Piast players couldn’t hide their joy as the trophy was passed around for them to share. Andrzej Grygiel/PAP

Needing three points to be certain of being crowned champions, they took on Lech Poznań last night with a record crowd of 9,913 crammed into the tight Piast Stadion to see their heroes edge a tense game after a 27th minute defensive blunder allowed Piotr Parzyszek to steal in for the winner. The final whistle sparked jubilant scenes, with several of Piast’s players collapsing onto the turf bewildered by the magnitude of their feat. 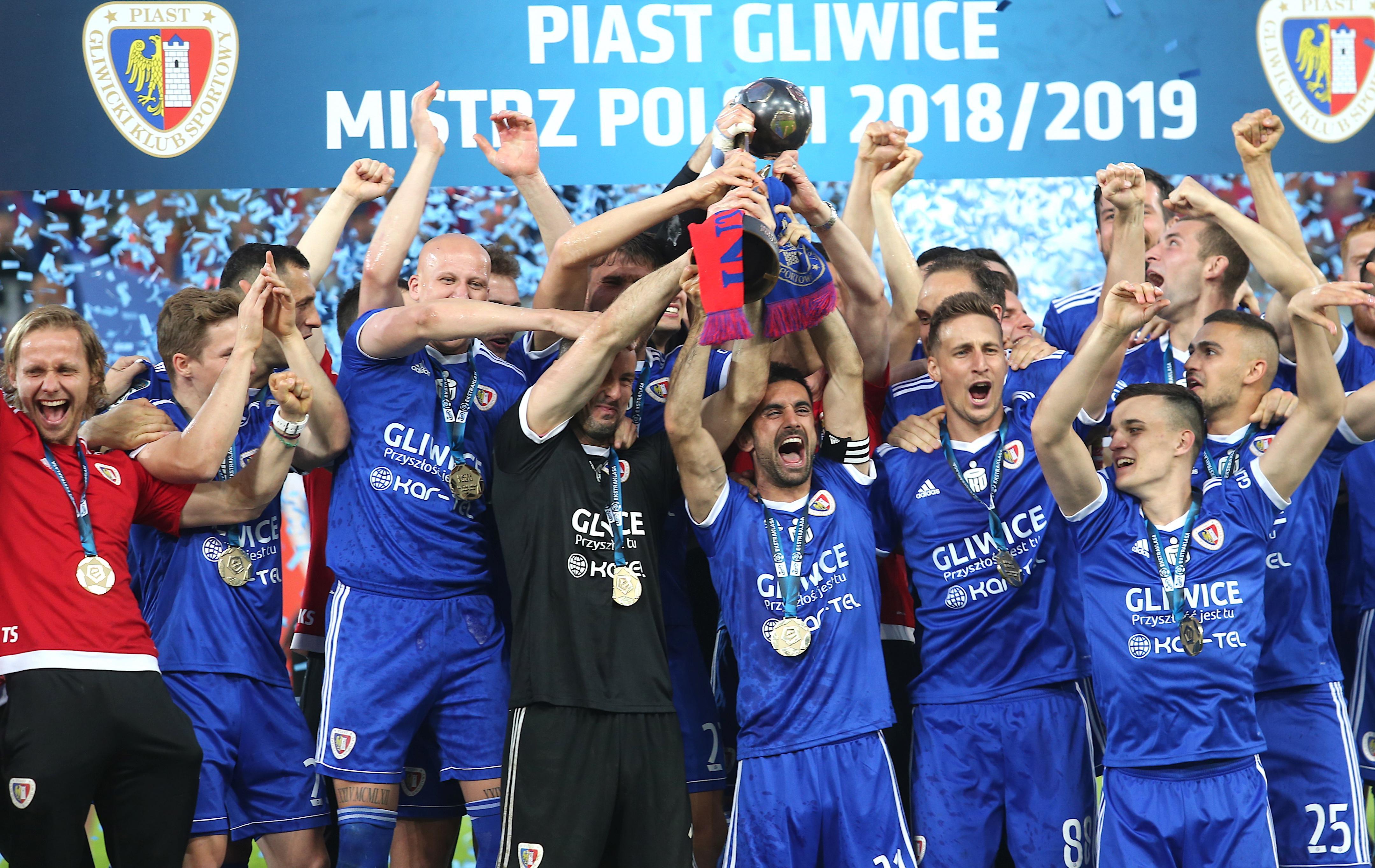 Having only first played in Poland’s top flight in 2008, Piast have limited Ekstraklasa pedigree and only narrowly escaped relegation last year thanks to a Houdini act on the final day of the season. “You’re talking about a small-to-medium sized side here,” Dr. Christopher Lash, a Warsaw-based professor and renowned expert on Polish football tells TFN, adding “with a budget that’s most probably five or six times smaller than Legia’s.” 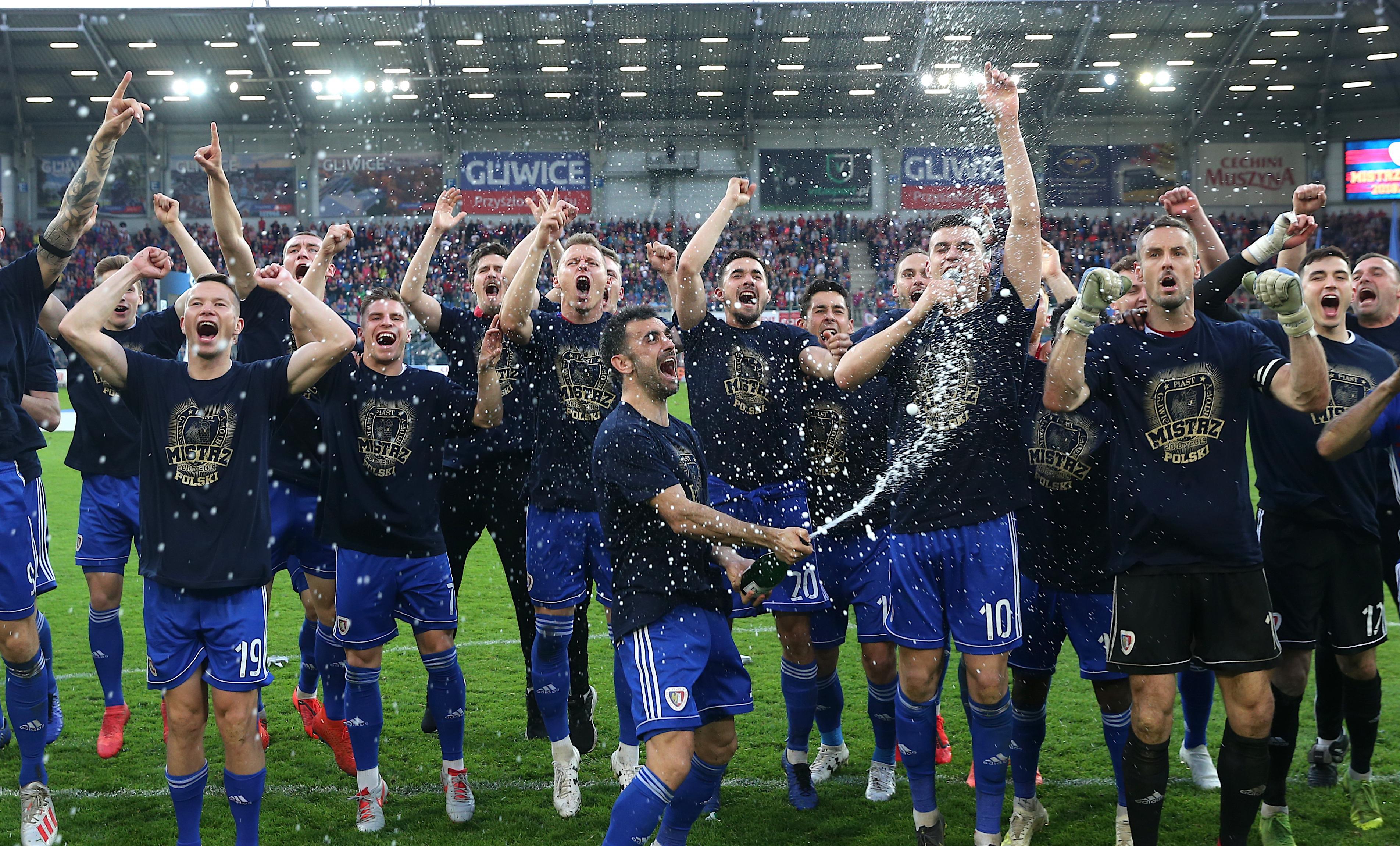 Fair spray: The Gliwice boys celebrate in style with a huge bottle of champagne.Andrzej Grygiel/PAP

“As for their crowds,” continues Lash, “you’ll hear people joke that there’s probably more Górnik Zabrze fans (editorial note: Piast’s closest rivals) living in Gliwice than there are fans of Piast.” With the latter’s crowds slipping to 3,000 earlier in the season, this is not the exaggeration it might otherwise seem. 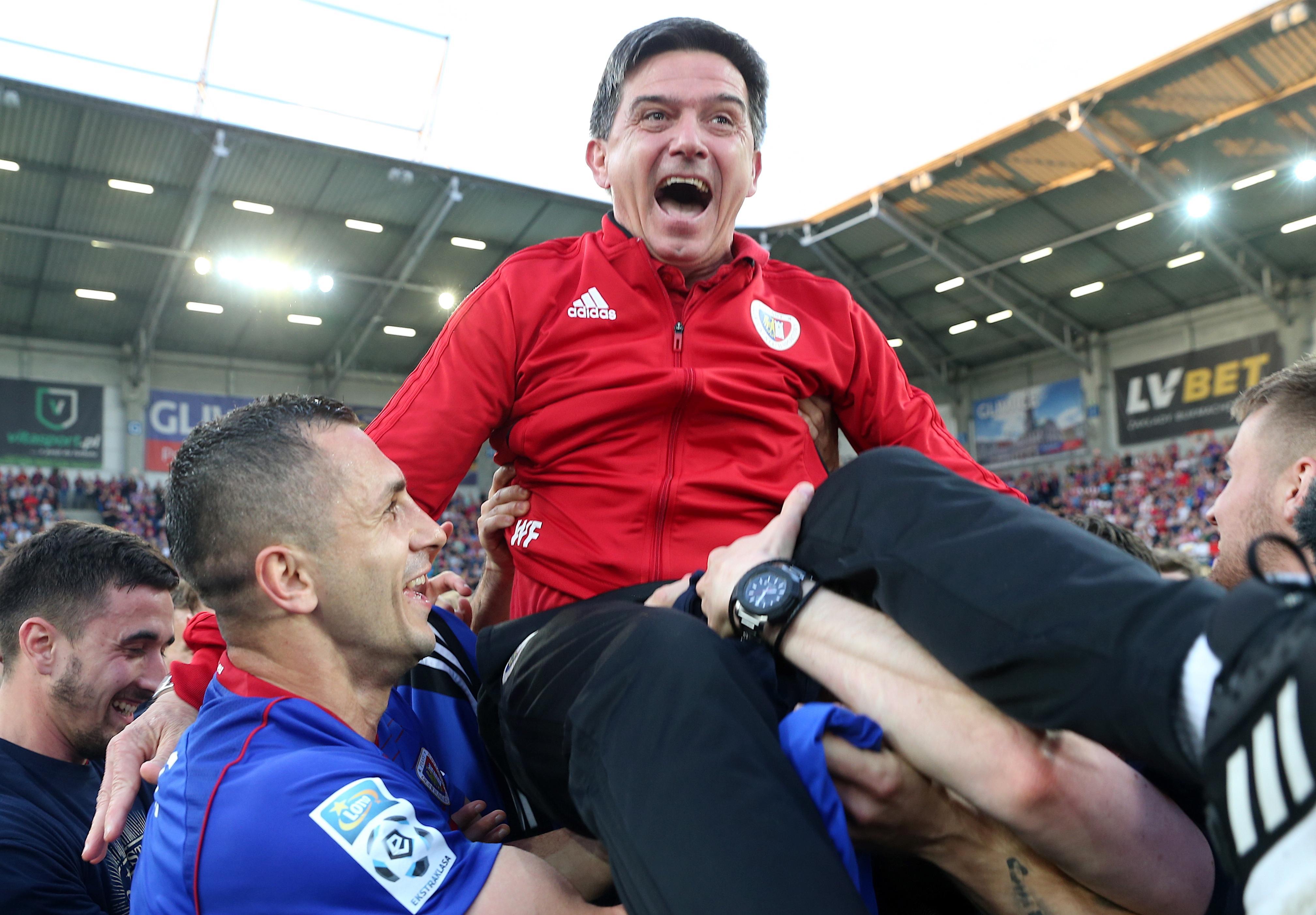 Adding to the fairy tale aspect has been the rehabilitation of coach Waldemar Fornalik’s reputation which suffered as national coach after Poland failed to qualify for the 2014 World Cup. Andrzej Grygiel/PAP

Accordingly, the David v Goliath proportions of the story have earned inevitable comparisons to Leicester City’s improbable Premiership triumph in 2016. Adding to the fairy tale aspect has been the rehabilitation of coach Waldemar Fornalik’s reputation. Immensely likeable, he saw his stock fall dramatically after a brief stint as Poland manager during which the country failed to qualify for the 2014 World Cup. 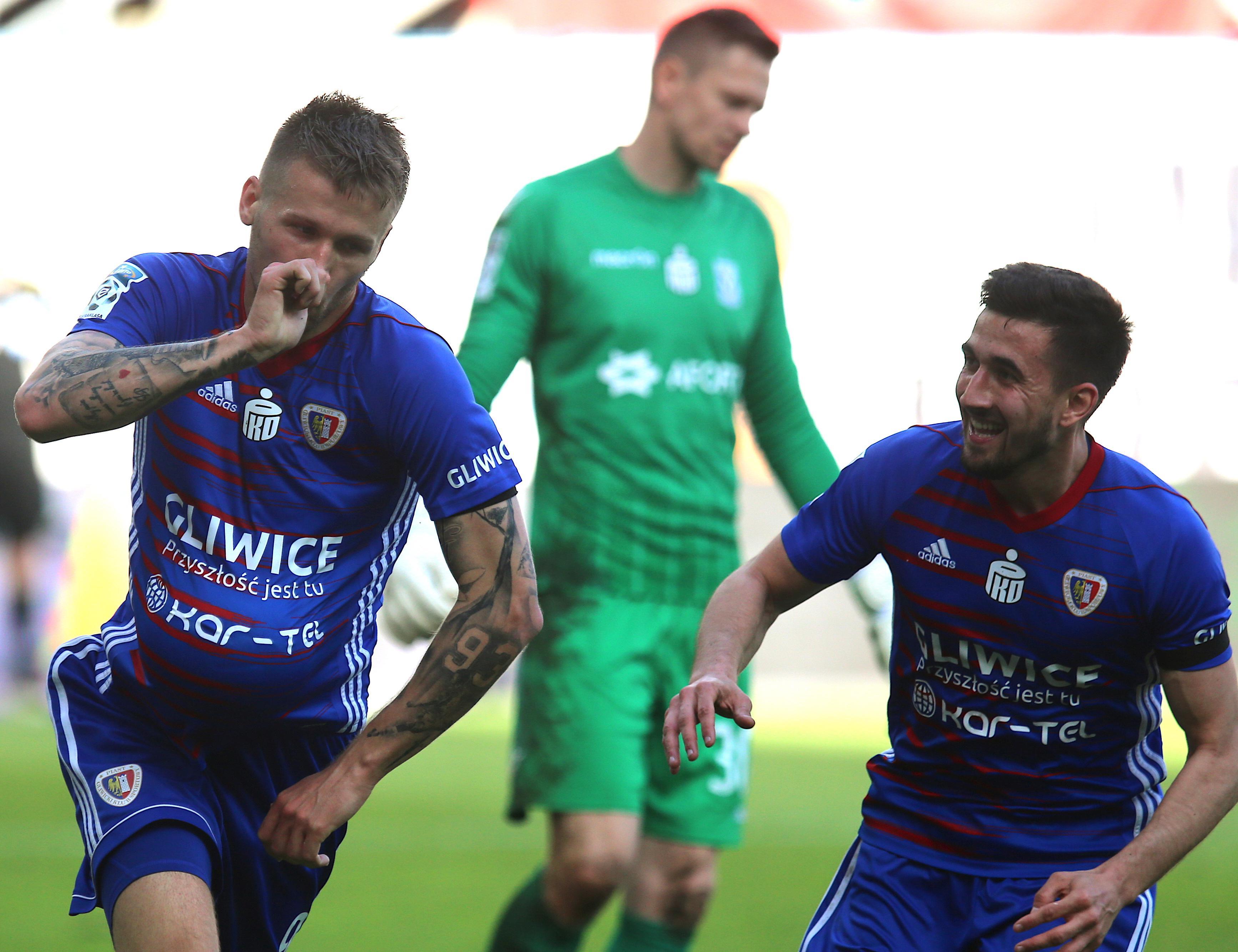 Furthermore has been the club’s own curious story, having had 22 different names due to mergers with eight different teams, as well as its exotic menagerie of players – among them, Tomasz Jodłowiec, on loan from Legia and a winner of six league titles in the last seven seasons, Ecuadorian Joel Valencia, crowd favourite Gerard Badia from Spain and Englishman Tom Hateley – son of the former England striker and Rangers legend Mark Hateley. 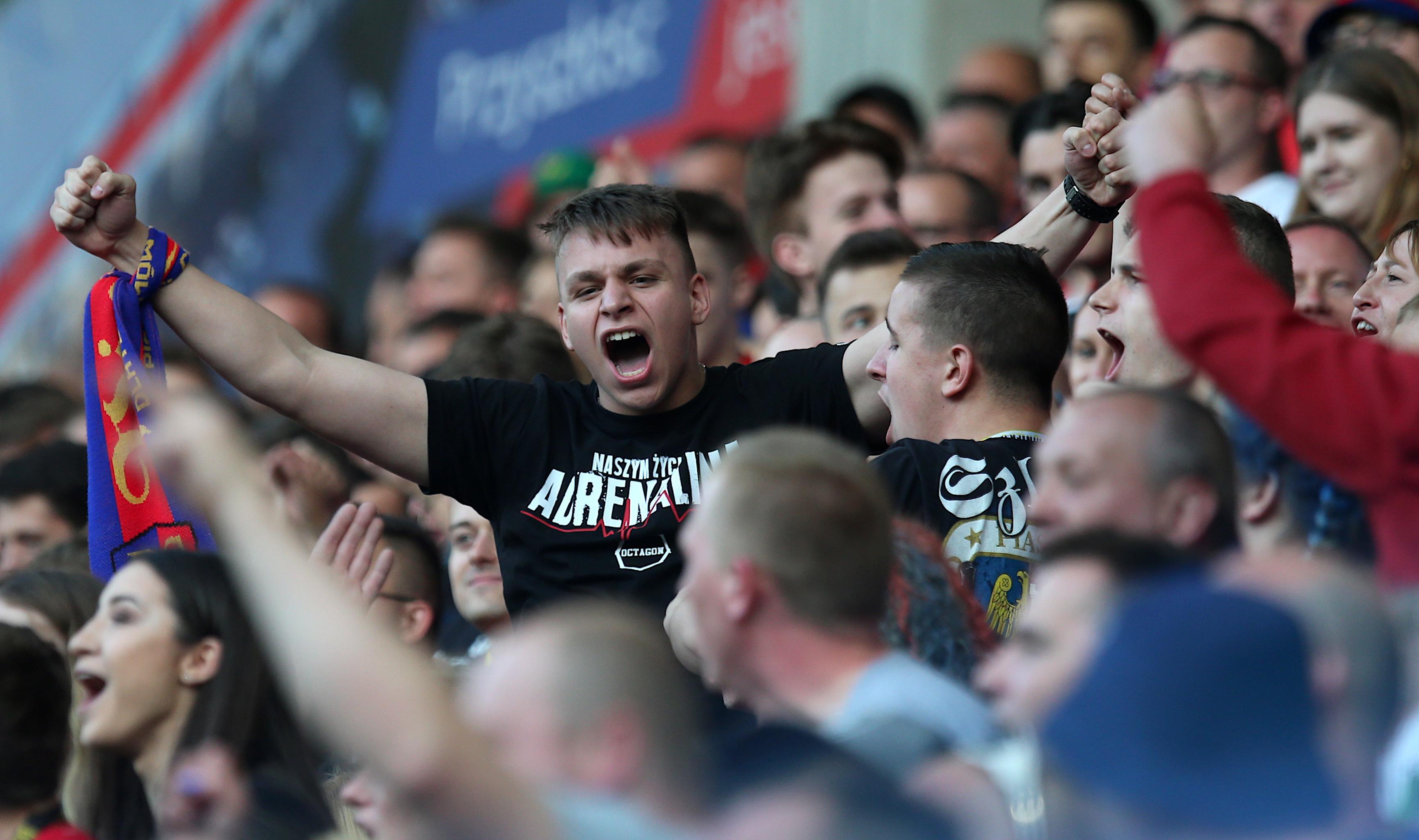 Fans erupted into joy as their team made footballing history. Andrzej Grygiel/PAP

Speaking exclusively to TFN after the match, midfielder Hateley pinpointed the annual winter break as the turning point. “We were playing well before then, but it was after we resumed the second half of the season that things clicked – why, I’m not really sure at this point, but everything felt that it just really came together at the right time.”

Lash, too, cites this year’s form as critical to their success. “It was an incredible run they went on, and things just started to snowball,” he says. “Of course, I think it helped tremendously that they played largely without pressure – everyone was focussed on Lechia and Legia and from a psychological point of view that allowed Piast to continue playing their brand of simple, attractive, effective football.” 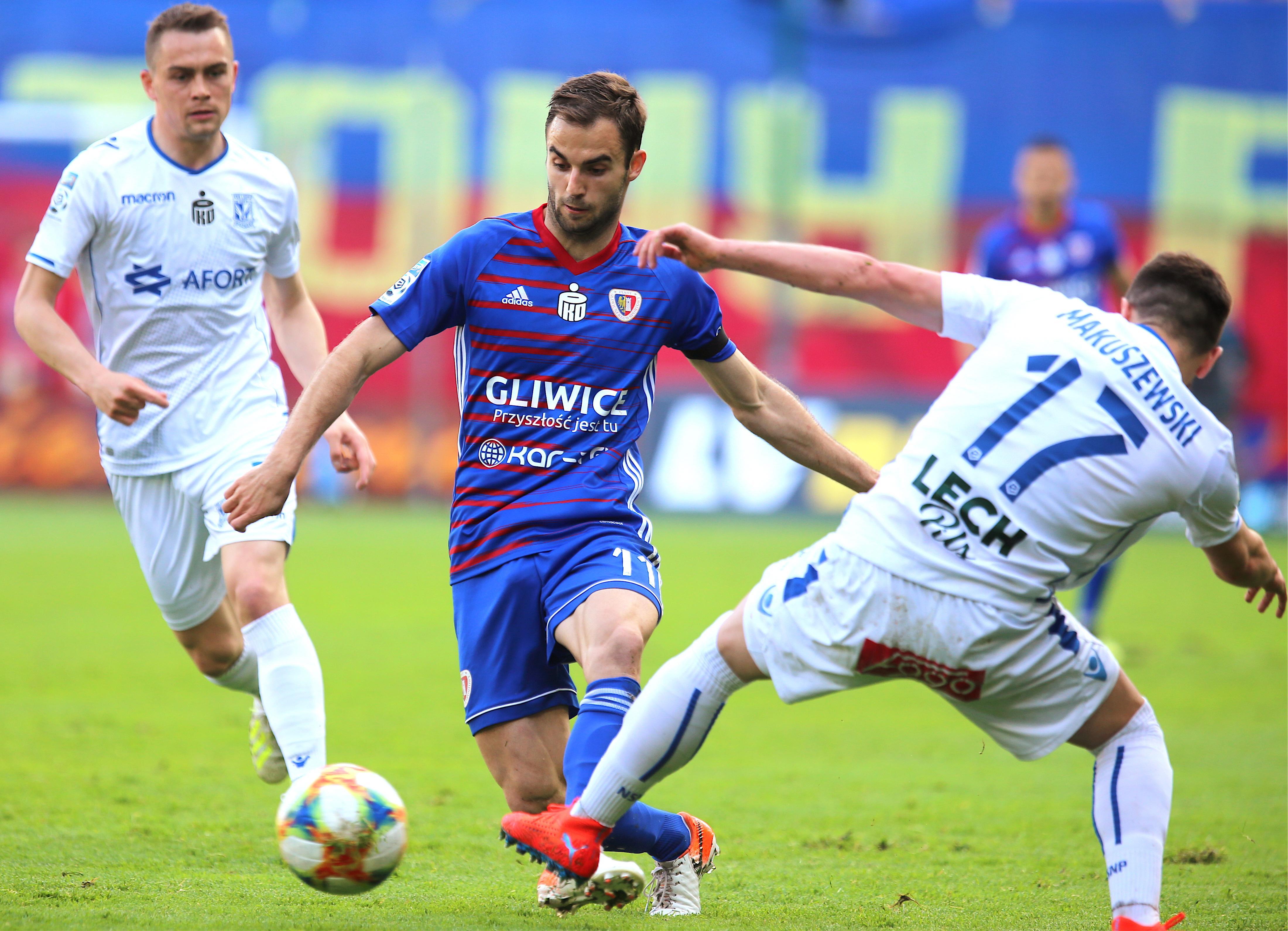 Even so, few took Piast’s challenge seriously and it was an away win at Legia at the start of May that truly announced their title credentials. That was followed by a helter-skelter, last gasp victory against Jagellonia Białystok, a match that placed Piast’s nerve under the closest scrutiny possible. With Jagellonia equalizing in the 89th minute, Piast roared up the pitch in the 90th to make it 2-1, only to then concede a penalty in the dying seconds. It was saved. “That was the moment,” states Lash, “that they mentally won the title.” 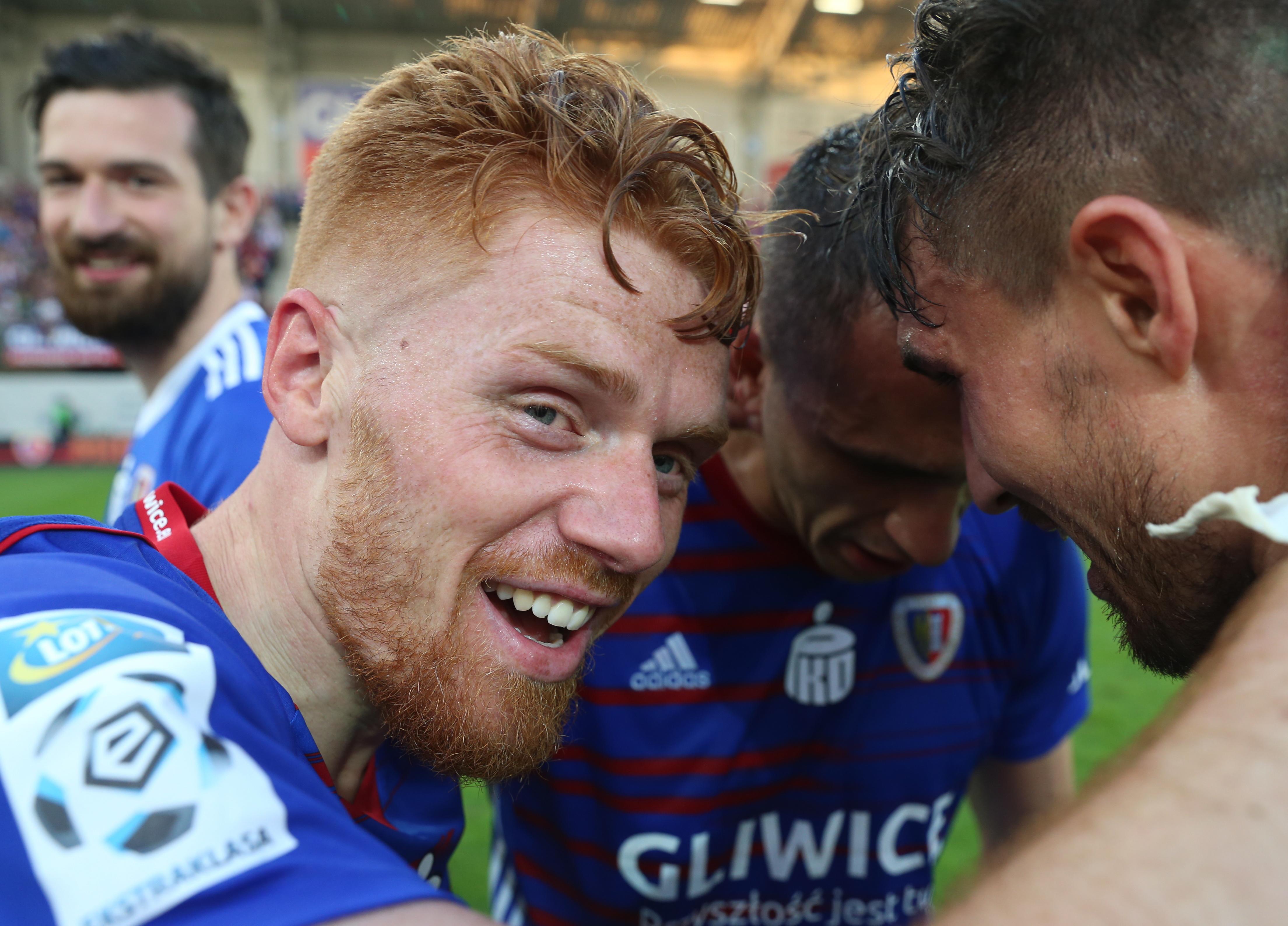 The final whistle sparked jubilant scenes, with several of Piast’s players collapsing onto the turf bewildered by the magnitude of their feat.Andrzej Grygiel/PAP

In Gliwice, a city currently suffering the planet’s biggest collective hangover, a feeling of surreal disbelief hangs over the town. Raucously received by a flare-wielding crowd, an open-top bus parade last night signalled arguably the town’s largest ever outpouring of public joy. “Bring on Barcelona,” sang some fans as they decorated the Neptune fountain in the square with scarves.

Today, absurd as it would have sounded at the start of the year, the dream of brushing shoulders with Europe’s footballing royalty is very much alive.

Polish crews to help out in French PSA plant