They built this city… actually they didn’t! Fascinating hand-drawn plans reveal how Warsaw could have looked

It is a city of wide, open boulevards, clear skies, immense public spaces and monumental structures; bold and brave, it is a Utopian vision of the city of the future.

This is Warsaw, or at least, this is the Warsaw imagined by the architects that worked on the post-war reconstruction of the Polish capital.

Rendered little more than a smoking pile of bricks, the trail of devastation that German occupation in WWII left behind has been well-documented, yet while it is popular to lament and mourn the loss of what is nostalgically remembered as the Paris of the East, for the architects of the day it presented a thrilling opportunity to correct the mistakes of their predecessors. 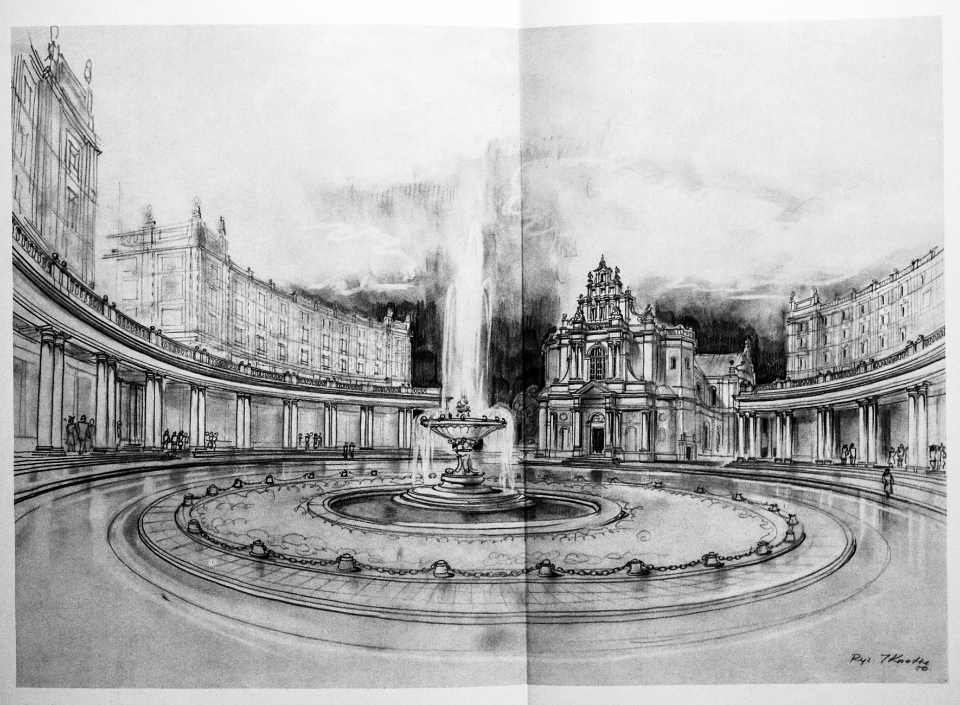 Lacking its signature twin spires, the church at Pl. Zbawiciela is presented as a stout work overlooking a majestic fountain.Sześcioletni plan odbudowy Warszawy 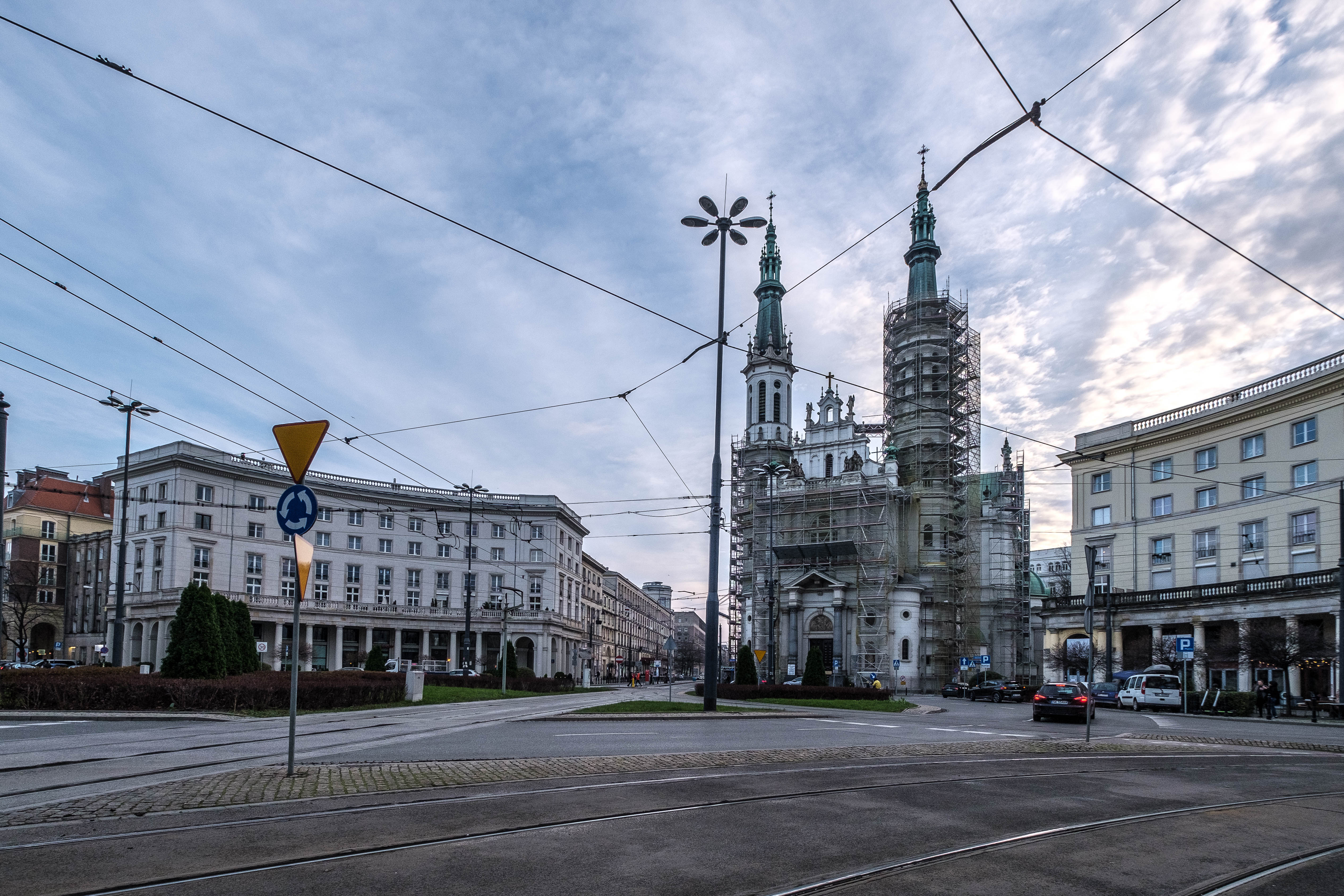 Away from the fondly recounted memories of swish ballrooms, elegant hotels, ornate palaces and pretty shopping streets, Warsaw, like practically every other major European conurbation, had been allowed to grow haphazardly over its history with a sharp line dividing the haves from the have nots. For many, reality was far removed from the world of champagne and oysters commonly depicted in film.

Rafał Patla, founder of the Museum of Life in the PRL, tells TFN: “Pre-war Warsaw was beautiful, but we have to remember that this memory only applied to certain districts and zones. Other parts were slum districts, over-crowded and often lacking basic sanitary facilities. Can you believe, one tenement courtyard was only nine square metres?

“Even back then, this was a city of contrasts,” he continues. “We often look back at the beautiful city presented in the postcards, but there was another face to the city that wasn’t shown in these.” 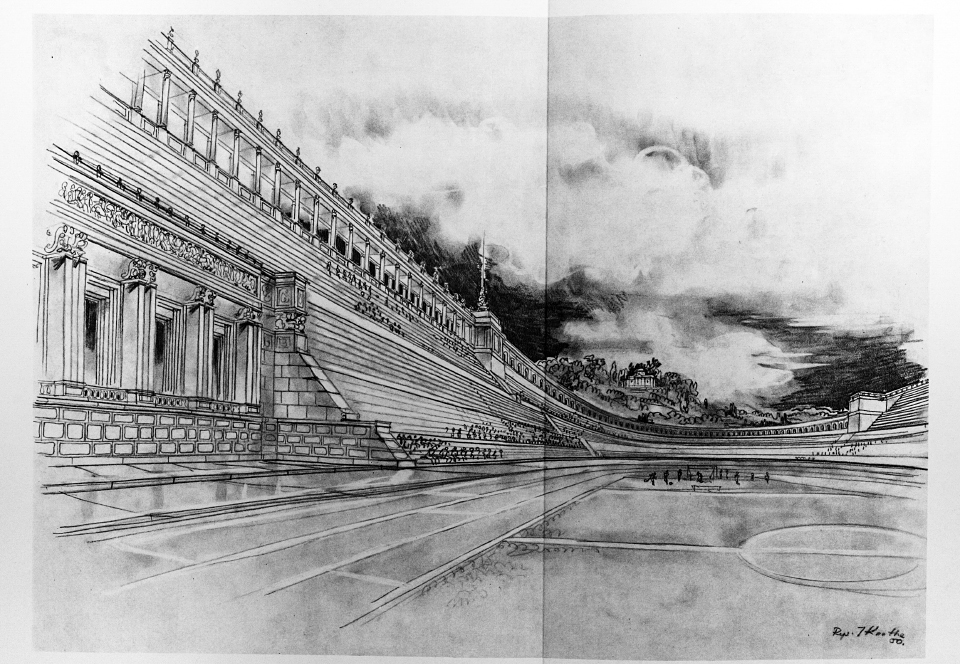 There were projections for a stadium in the Wierzbno district.Sześcioletni plan odbudowy Warszawy

Having sustained widespread damage (the majority of estimates settle for 84% total destruction), architects were handed a blank canvas with which to work with.

“Of course,” says Patla, “architects and planners were aware of the problems facing Warsaw’s development before the war, but it was only after that they had the chance to implement their ideas and rebuild it from scratch.”

Such was the scale of devastation that some campaigners famously lobbied for the capital to be permanently relocated to Łódź, however, the propagandistic value attached to rebuilding Warsaw was simply too good to ignore and an enthusiastic reconstruction was swiftly undertaken. 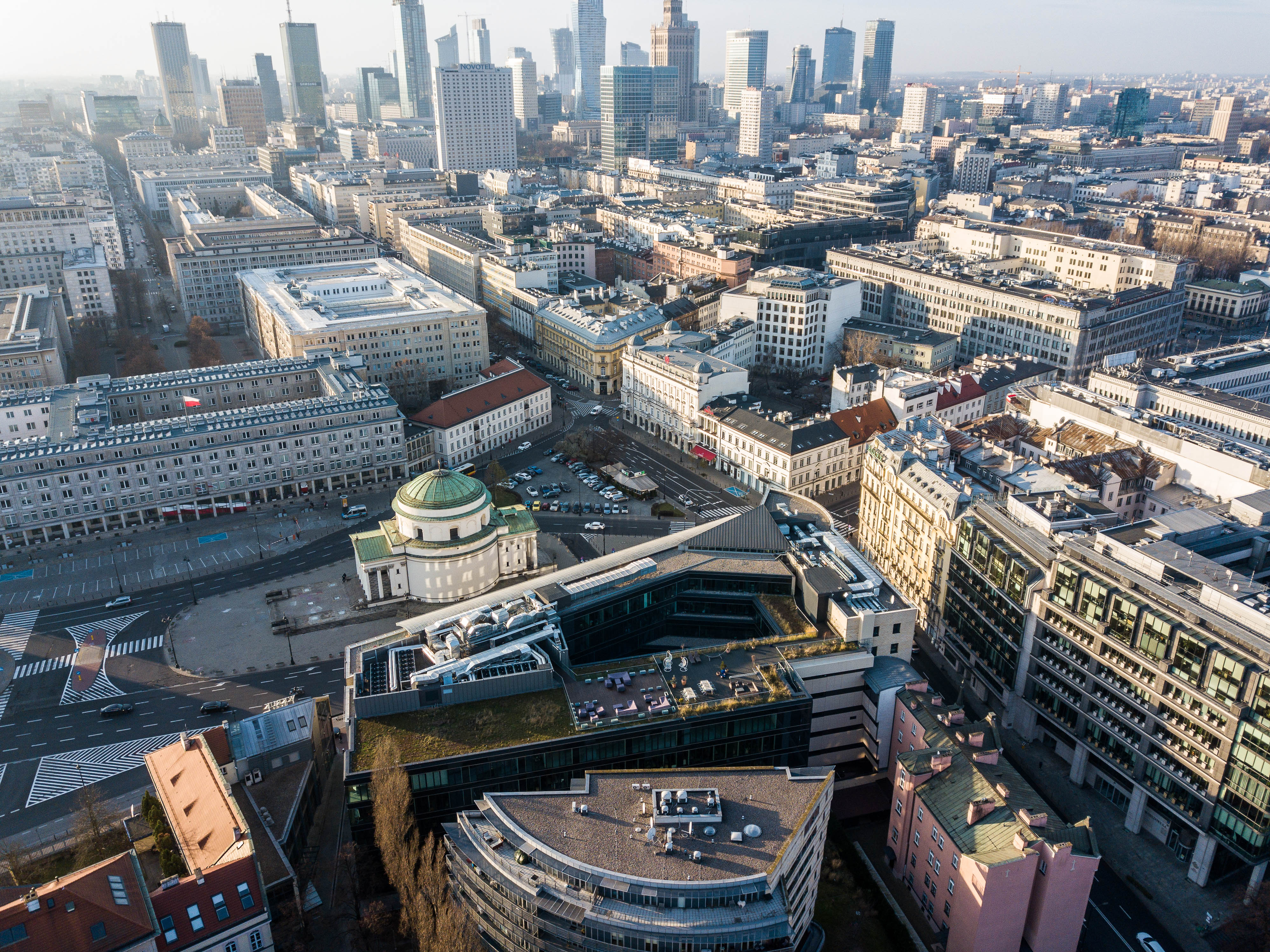 This, though, would take a new slant when, on July 3rd, 1949, Bolesław Bierut announced his “six-year plan for the reconstruction of Warsaw”.  Somewhat famously, these utterances would soon after be expressed in a book bearing the same long-winded title: Sześcioletni plan odbudowy Warszawy.

For Patla, it is was at this moment that architectural vision became irrevocably intertwined with propaganda.

“Prior to that,” he says, “from the years 1945 to 1948 you had a very different concept of rebuilding. Only in 1949 was Socialist Realist ideology added.”

This was done and in dramatic style. 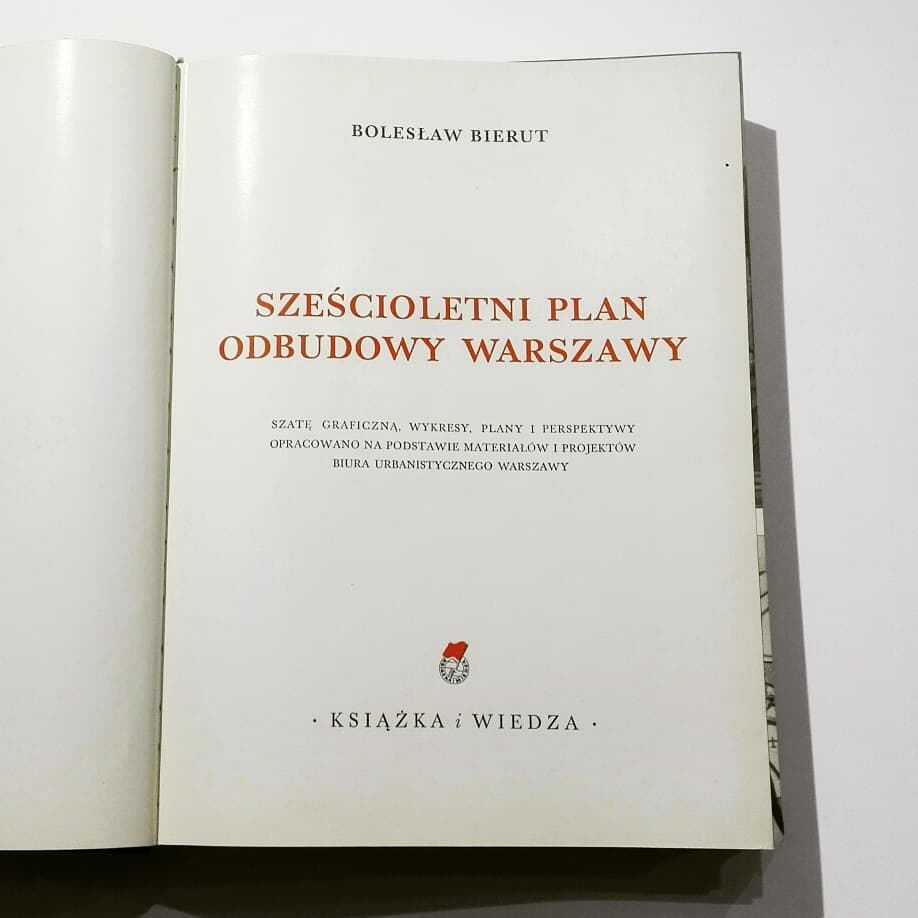 The ideas were published in a book laying out Bolesław Bierut’s “six-year plan for the reconstruction of Warsaw”, which was also the title - Sześcioletni plan odbudowy Warszawy.Antykwariat Kwadryga/Facebook

Whilst from the outset architects had been inspired by the concept of providing the city with space, a new bombastic and politically-motivated element was to influence their work.

That much is evidenced by the book; crediting Bolesław Bierut as its author on the cover, the thick tome has become a collector’s item and a mainstay of internet auction sites and dusty antique stores.

Touting pictures of Bierut rubbing shoulders with workers, images demonstrating the city’s pre-war slum conditions and no shortage of graphs and statistics detailing awaited improvements, no excuse is missed to lambast the shortcomings of the Warsaw of yesteryear. 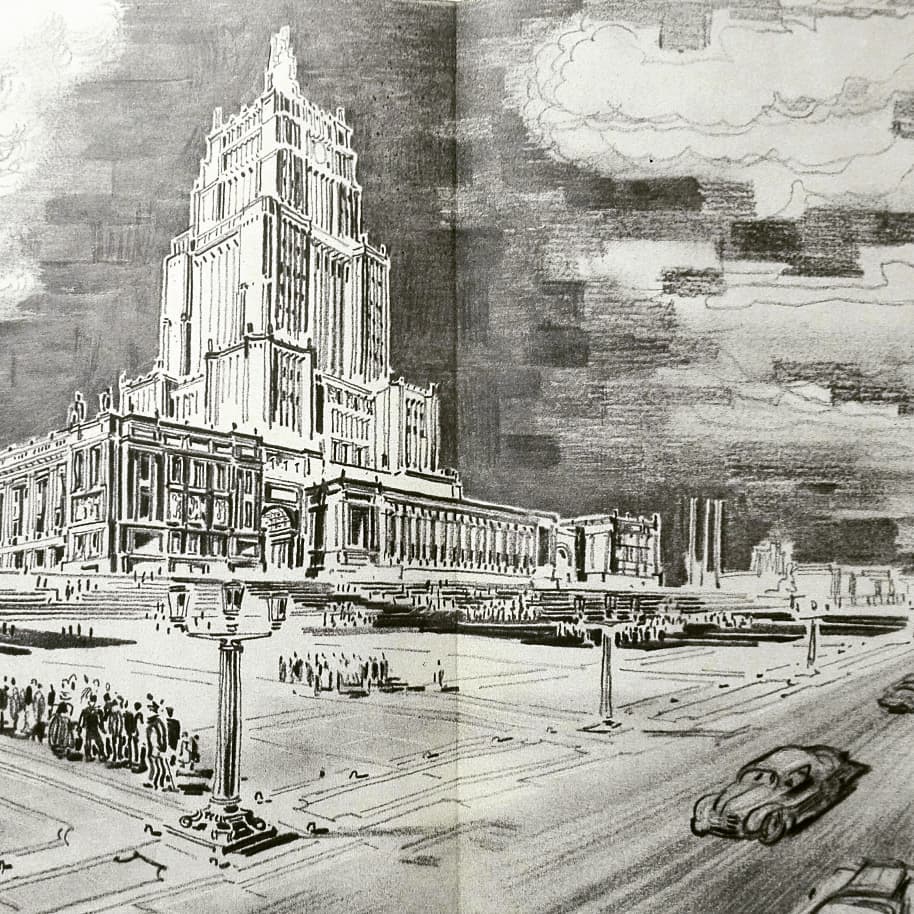 Although the Palace of Culture was built right in the city centre, initially other locations were also considered, including Pl. Unii Lubelskiej and Rondo Waszyngtona.Antykwariat Kwadryga/Facebook

“When you look at these plans,” says Patla, “it’s clear that they wanted to erase the memory of the capitalist epoch that preceded the war.”

But whilst this was rooted directly in Socialist ideals, other plans were borne from a genuine desire to make the city liveable: a vast swathe of greenery measuring four times the length of New York’s Central Park was one innovation that was to be implemented.

Perhaps, though, the most striking of all are the drawings of architects such as Jan Knothe. It is these that draw the breath with their presentation of a Warsaw that was never to be: like something from Ancient Rome, readers’ marvel at projections for a stadium in the Wierzbno district, or a huge sunken amphitheatre built on the southern fringe of Pl. Trzech Krzyży. 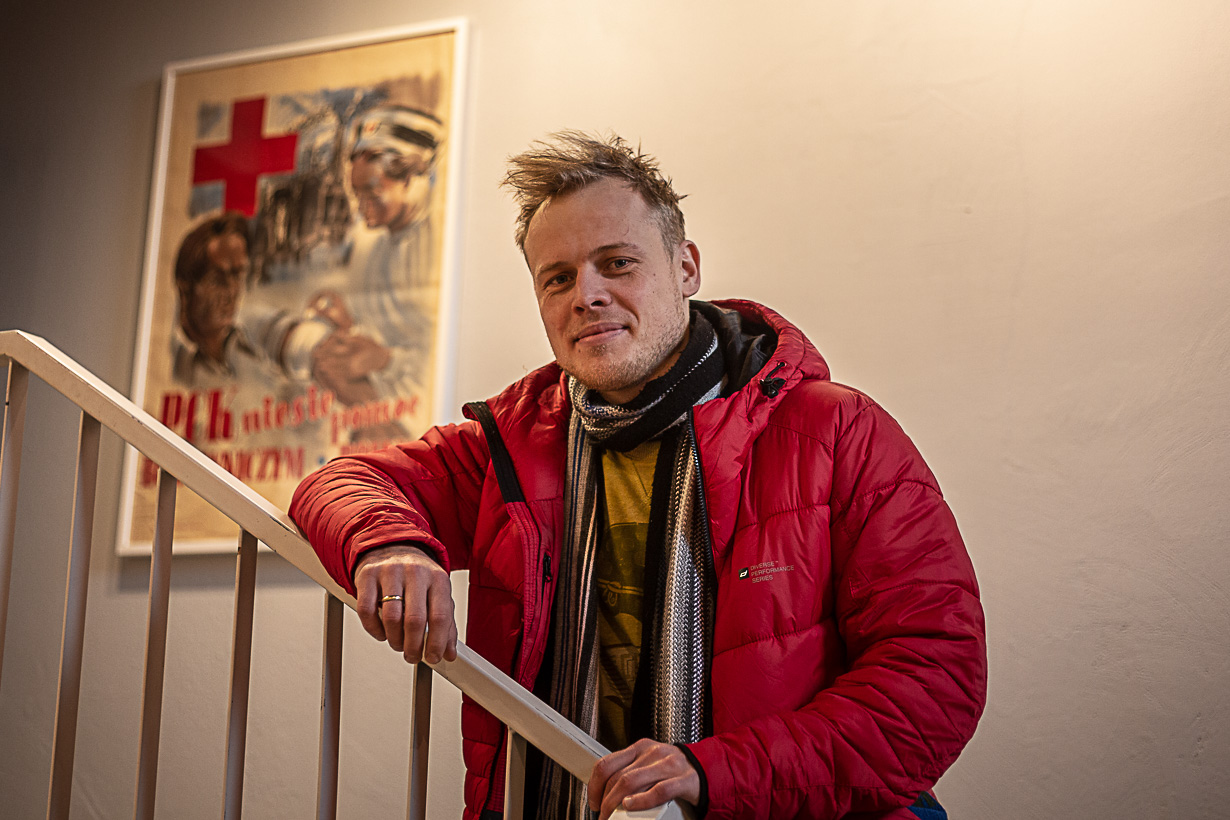 Rafał Patla, founder of the Museum of Life in the PRL, said: “From the years 1945 to 1948 you had a very different concept of rebuilding. Only in 1949 was Socialist Realist ideology added.”Kalbar/TFN

Lacking its signature twin spires, the church at Pl. Zbawiciela is presented as a stout work overlooking a majestic fountain, while Pl. Unii Lubelskiej is perceived as a vast square of almost dehumanizing dimensions.

Wacky as these ideas may seem, they do not scratch the surface.

“The Ministry of Agriculture on Wspólna was to have an experimental field growing potatoes in front of it,” says Patla, “though that said, other ideas for it included a square just ahead. And although the Palace of Culture was of course built right in the city centre, initially other locations were also considered – Pl. Unii Lubeslskiej and Rondo Waszyngtona.”

So what stopped this all? 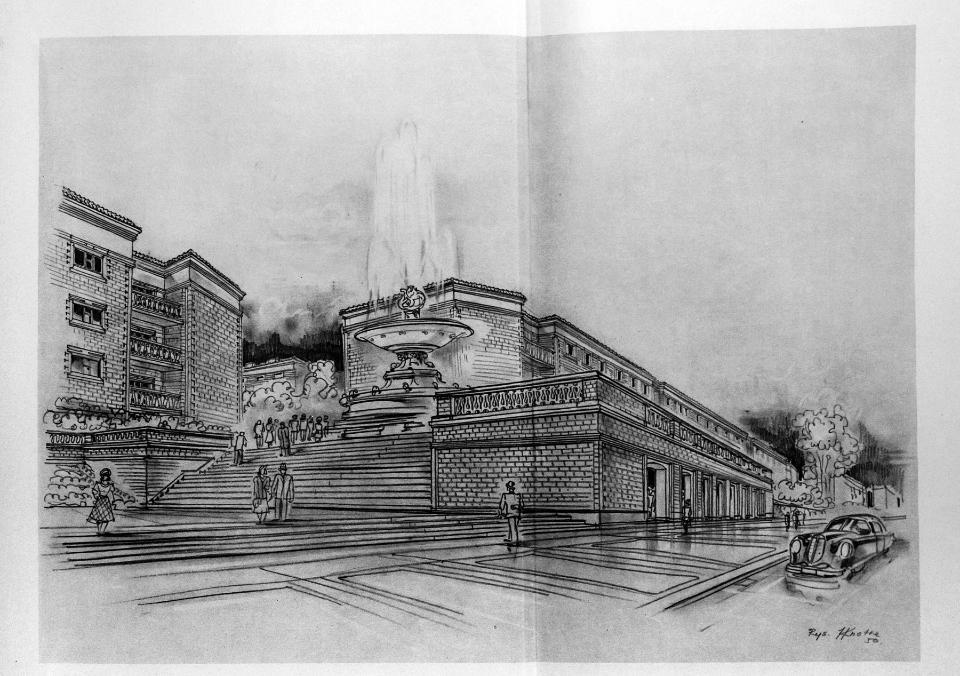 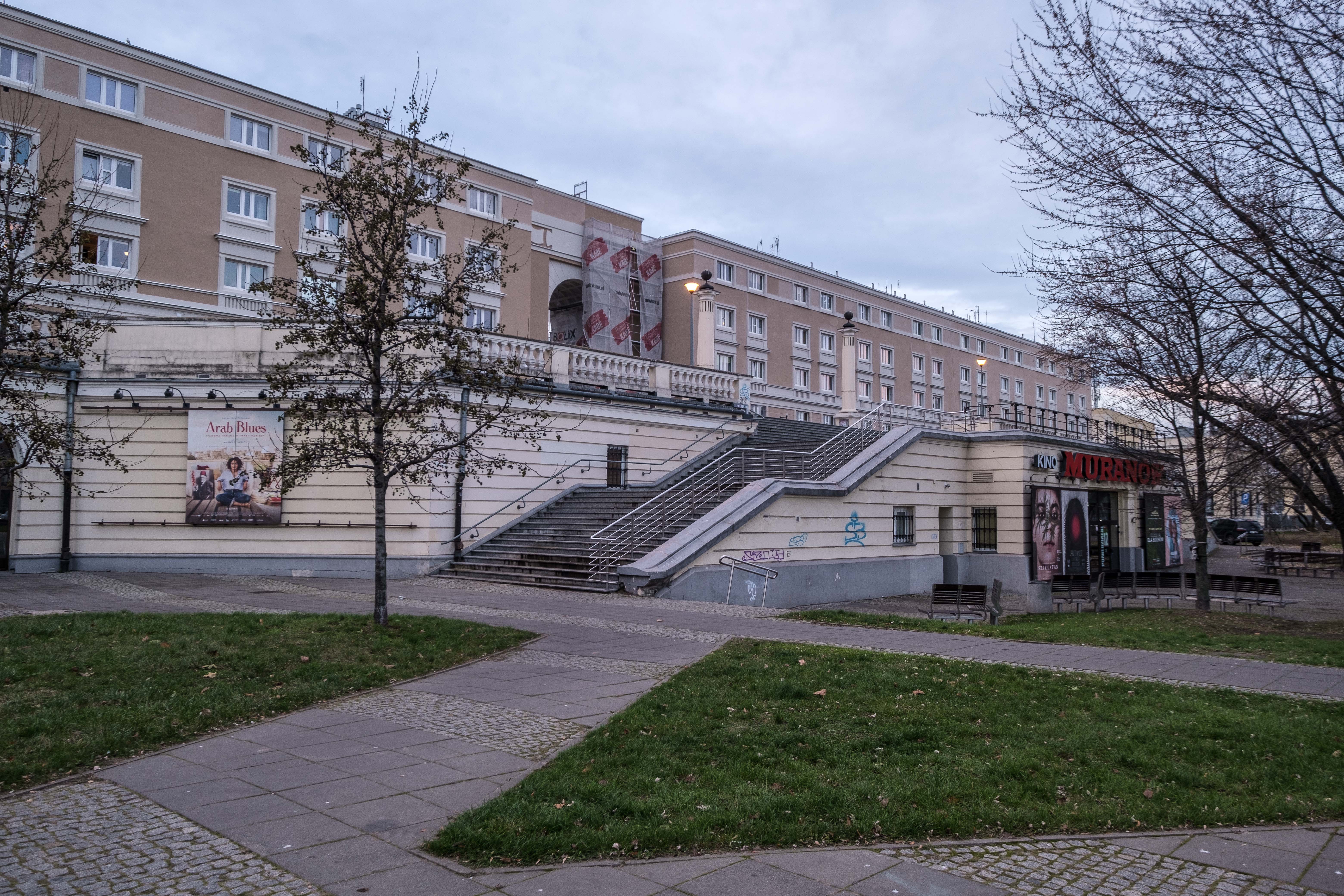 Contrary to popular opinion, it wasn’t the death of Stalin that put this new Warsaw on ice, but rather more practical concerns.

“Money was a big factor,” says Patla, “but most important of all were just basic logistic concerns. The whole area behind the Party HQ was to be destroyed so as to accommodate the amphitheatre, but it survived – along with other key parts of the city – because of the general housing shortage.

“People were migrating back to Warsaw and there was an immediate need to house them,” he continues. “It wasn’t possible to invent houses from nothing so instead they were placed in the tenements or townhouses that had made it through the war. As time went on, it basically became too costly and complex to then rehouse them again. Plans became forgotten” 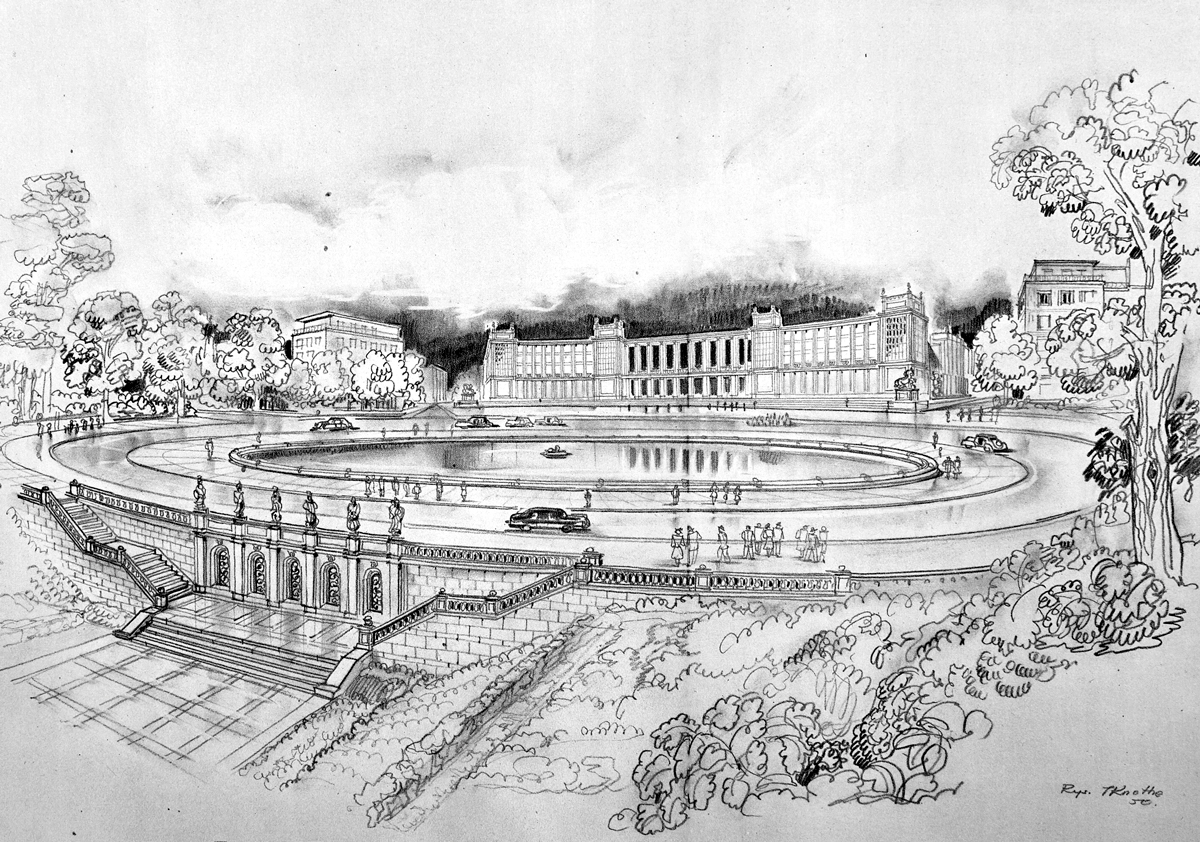 But while many of the ideas mooted in the book never came to fruition, others did – the northern Muranów housing estate, for instance, is almost identical to that presented in the volume, albeit missing cosmetic trimmings such as soaring water features.

“In many respects, forcing Socialist Realism onto the city was a way of punishing bourgeois Warsaw,” says Patla. “But when you look at the origins of the reconstruction project and the passion with which architects approached it then it’s a little bit different.

“They wanted to open the city up and they did this,” he adds. “The buildings they built, meanwhile, remain superior to the ones built thirty-years later. From a planning point of view, they sought to introduce things like hospitals and kindergartens to each area. These were all good things – it was just the political aspect that was bad.”