On this day, 79 years ago, the Nazi campaign of persecution of the Jews took a deadly new step with the sealing of the Warsaw Ghetto.

Though constituting approximately a third of the capital’s pre-war population, under the Nazi occupation the city’s Jews found themselves crammed inside an area covering just 2.5 percent of the town. Described by Emanuel Ringelblum as “a bolt from the blue”, the order to close the Ghetto would act as a precursor to the decision to deport those imprisoned within to the gas chambers. 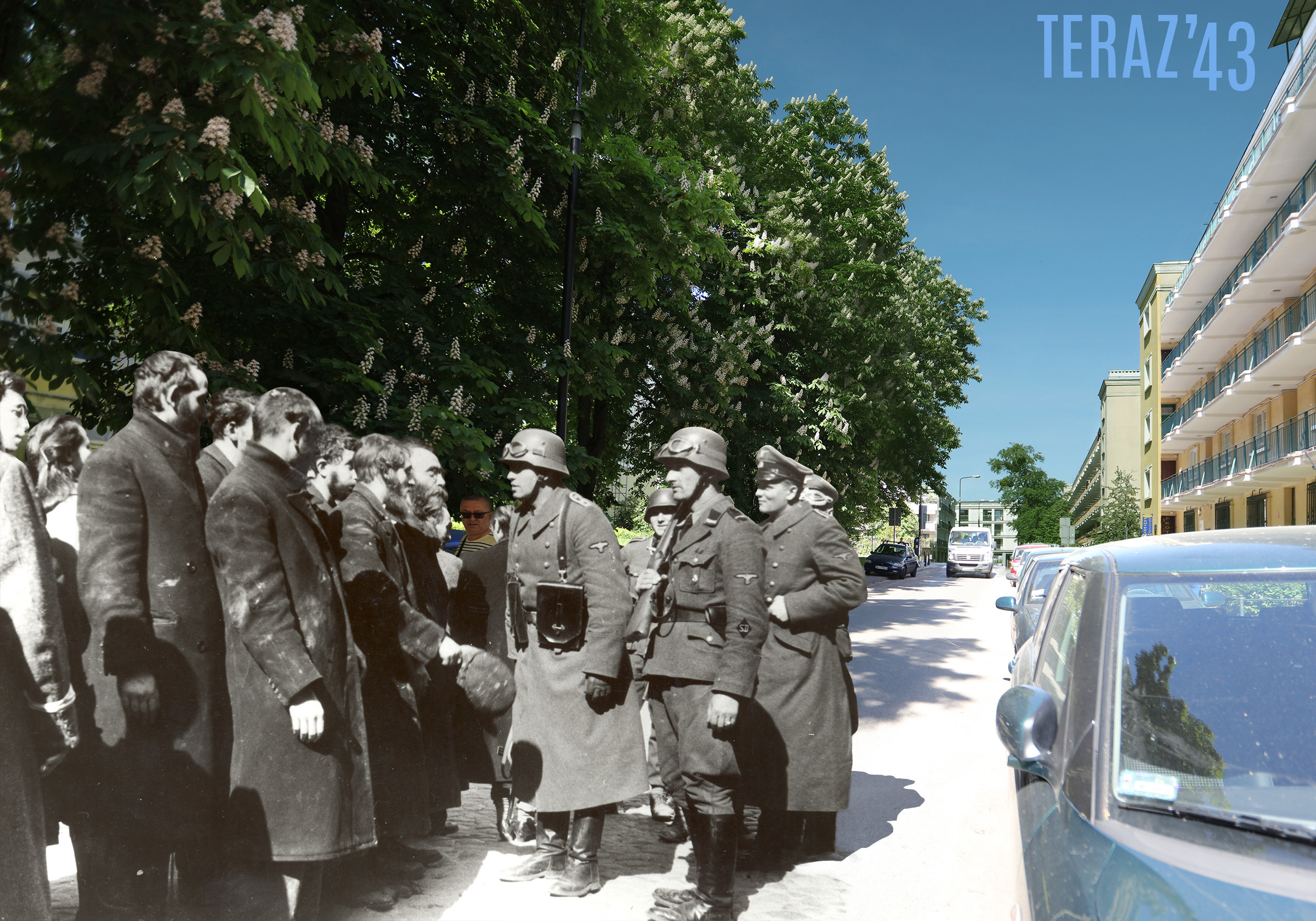 “We have entered a new phase of life,” wrote Chaim Kaplan at the time. “It is hard to imagine the panic which this has caused in the Jewish district. We have suddenly realized that we are confined and enclosed on all sides. We are now excluded and isolated from the world, expelled from human society.” 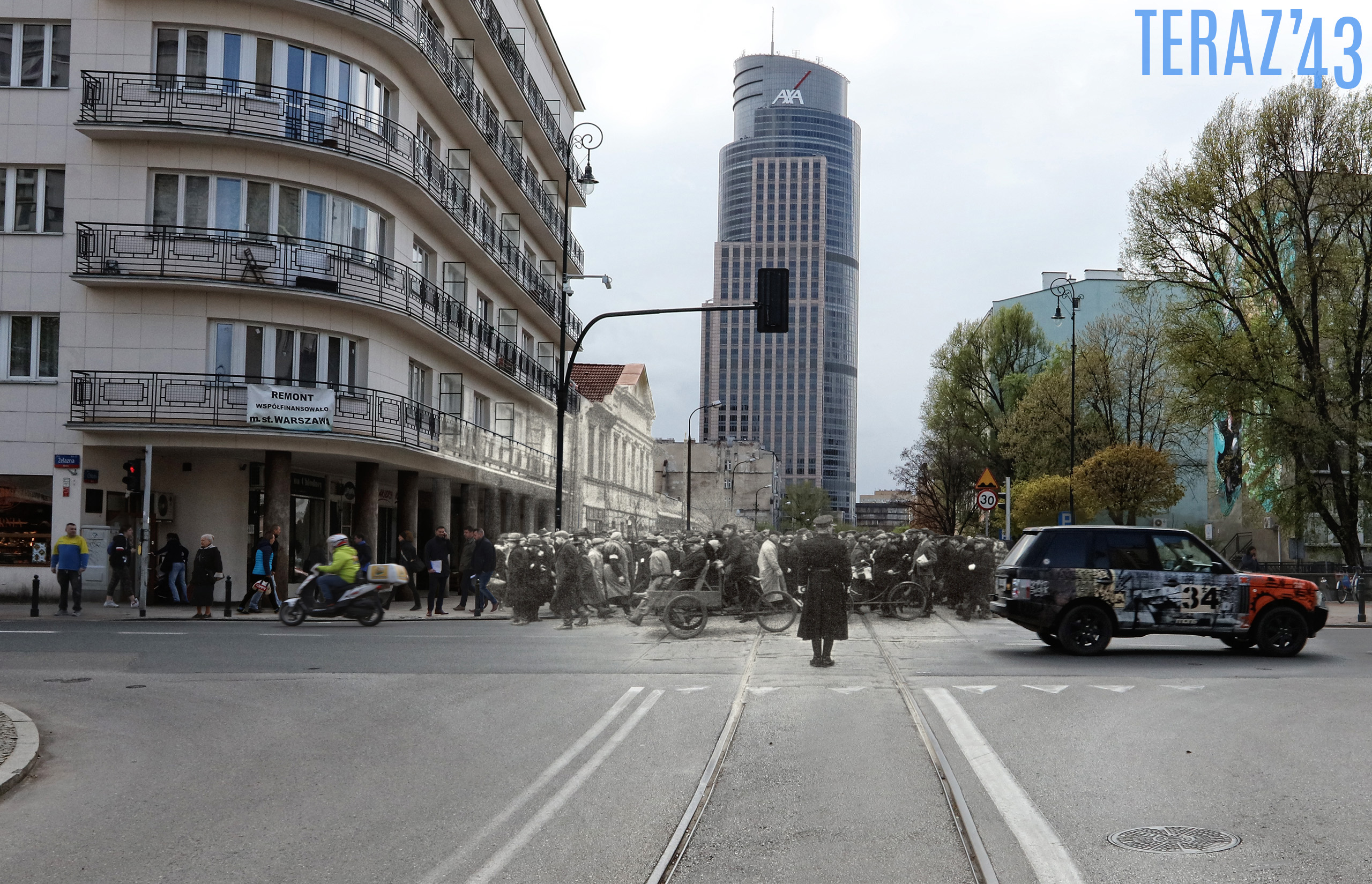 At the intersection of Chłodna and Żelazna, Jews cross from small ghetto to large. Later, an overhead bridge would be added.Marcin Dziedzic/Teraz ’43

Later methodically razed after the crushing of the 1943 Jewish Ghetto Uprising, little physical evidence remains of what was the largest and most significant wartime Ghetto, yet one photographer has helped bridge the past with the present by seamlessly merging archival images with current day pictures. 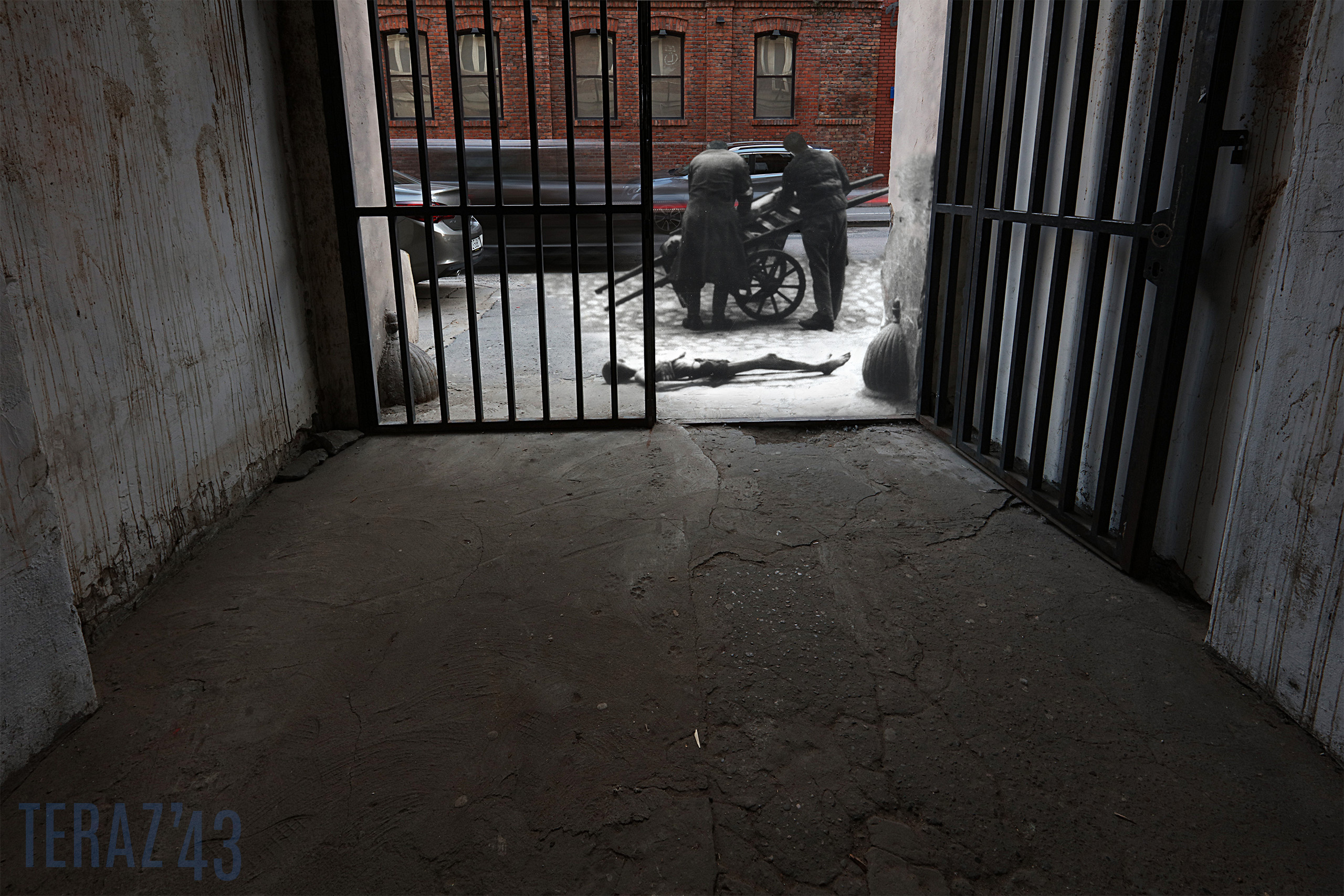 Inspired by the success of his ‘Teraz ’44’ project – a similar undertaking that focused on the 1944 Warsaw Uprising – Marcin Dziedzic’s ‘Teraz ’43’ made its online debut in 2014, but has since continued to capture the imagination for its ability to overlap the contrasting worlds of then and now. 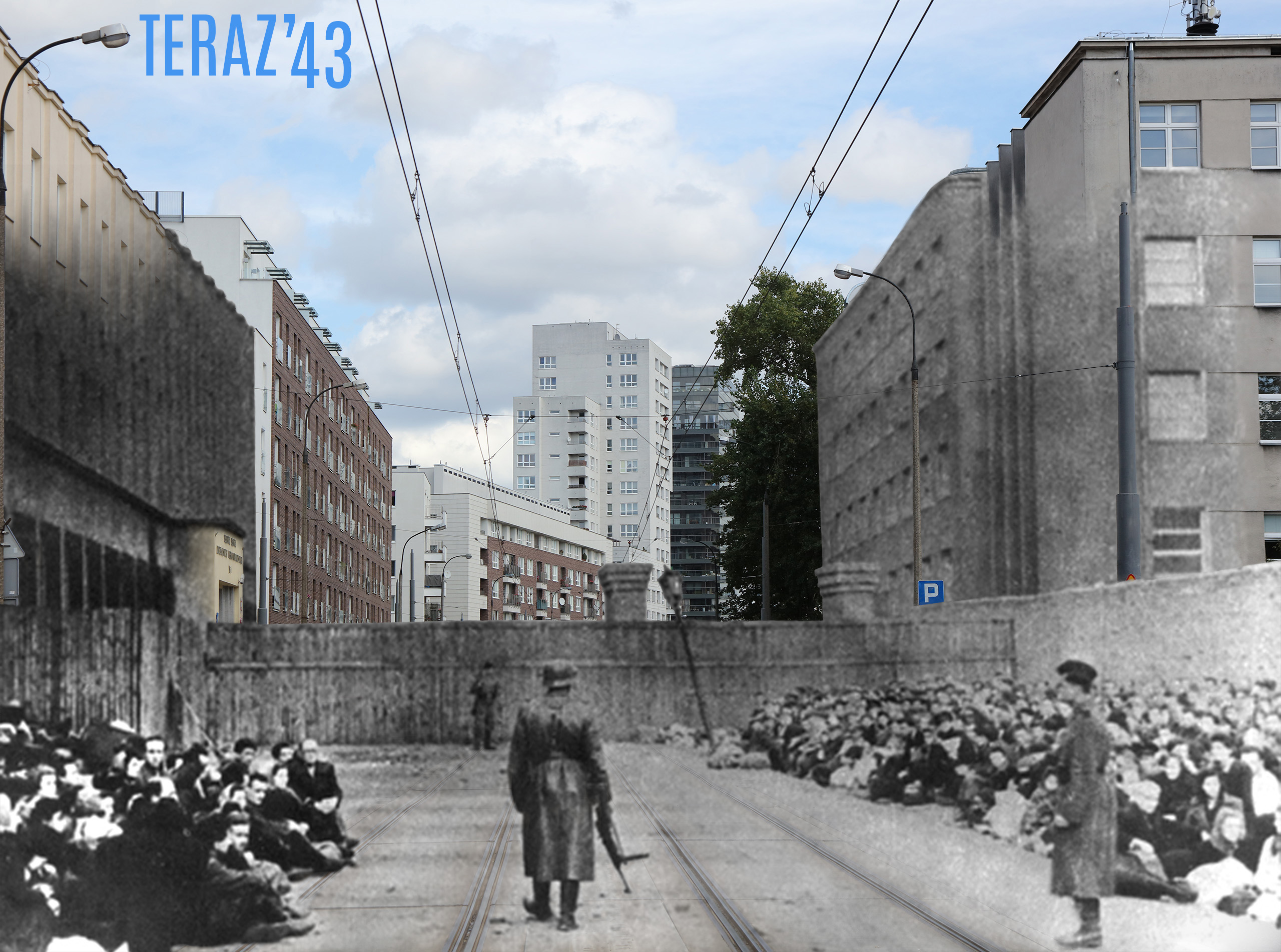 At Umschlagplatz on what is today ul. Stawki, Jews await transport to the gas chambers of Treblinka.Marcin Dziedzic/Teraz ’43

“Although ‘Teraz ’44’ was incredibly successful,” says Dziedzic, “I had the nagging feeling that something was missing from it. Then, it dawned on me – Warsaw had two Uprisings.” 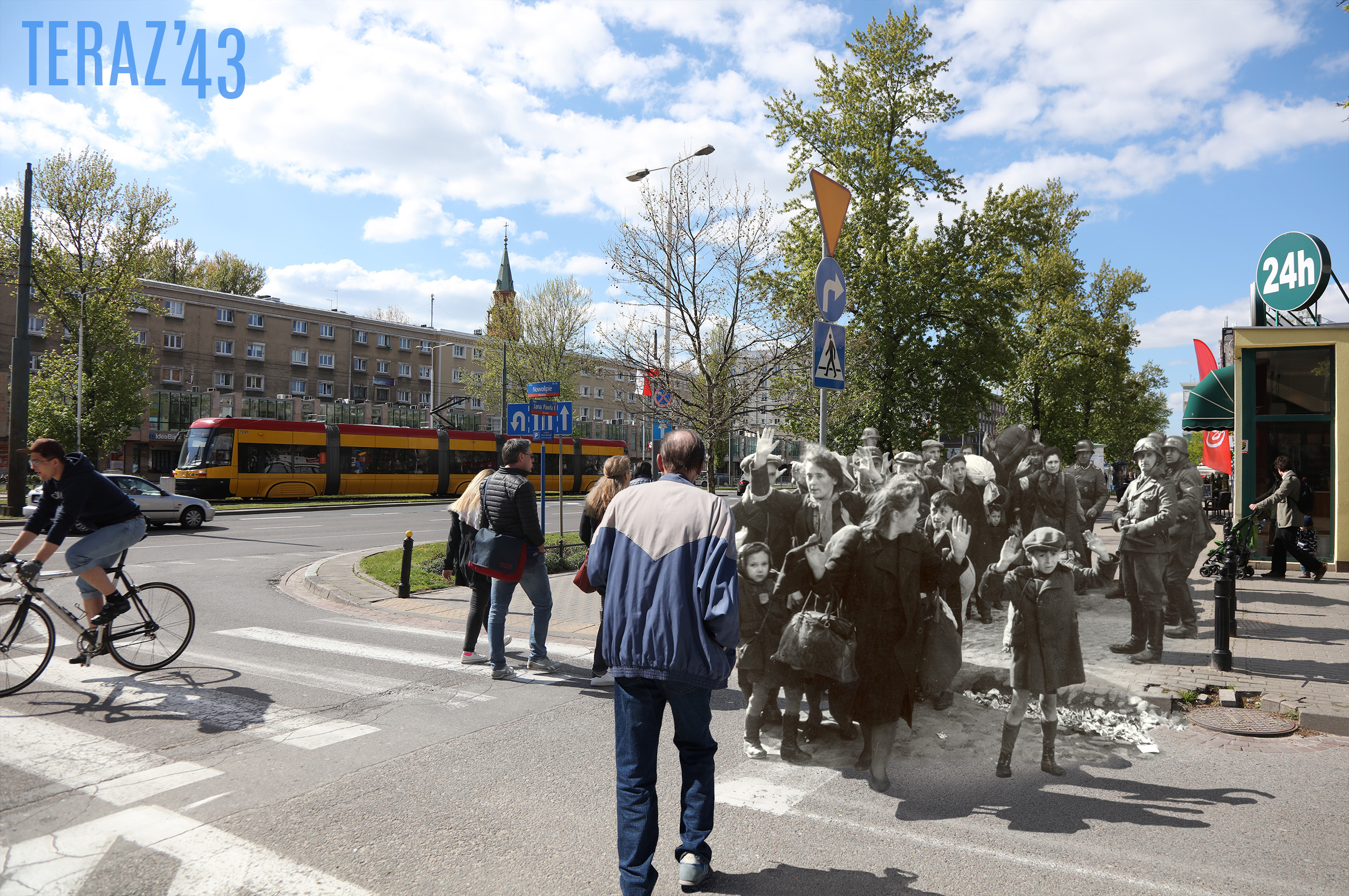 In arguably one of the most iconic photos of the Warsaw Ghetto, a frightened young boy is led away by German soldiers.Marcin Dziedzic/Teraz ’43

Yet rather than solely focusing on the bloody rebellion that would ultimately lead to the extinction of the city’s Jewish population, the photographer sought to develop his idea further. 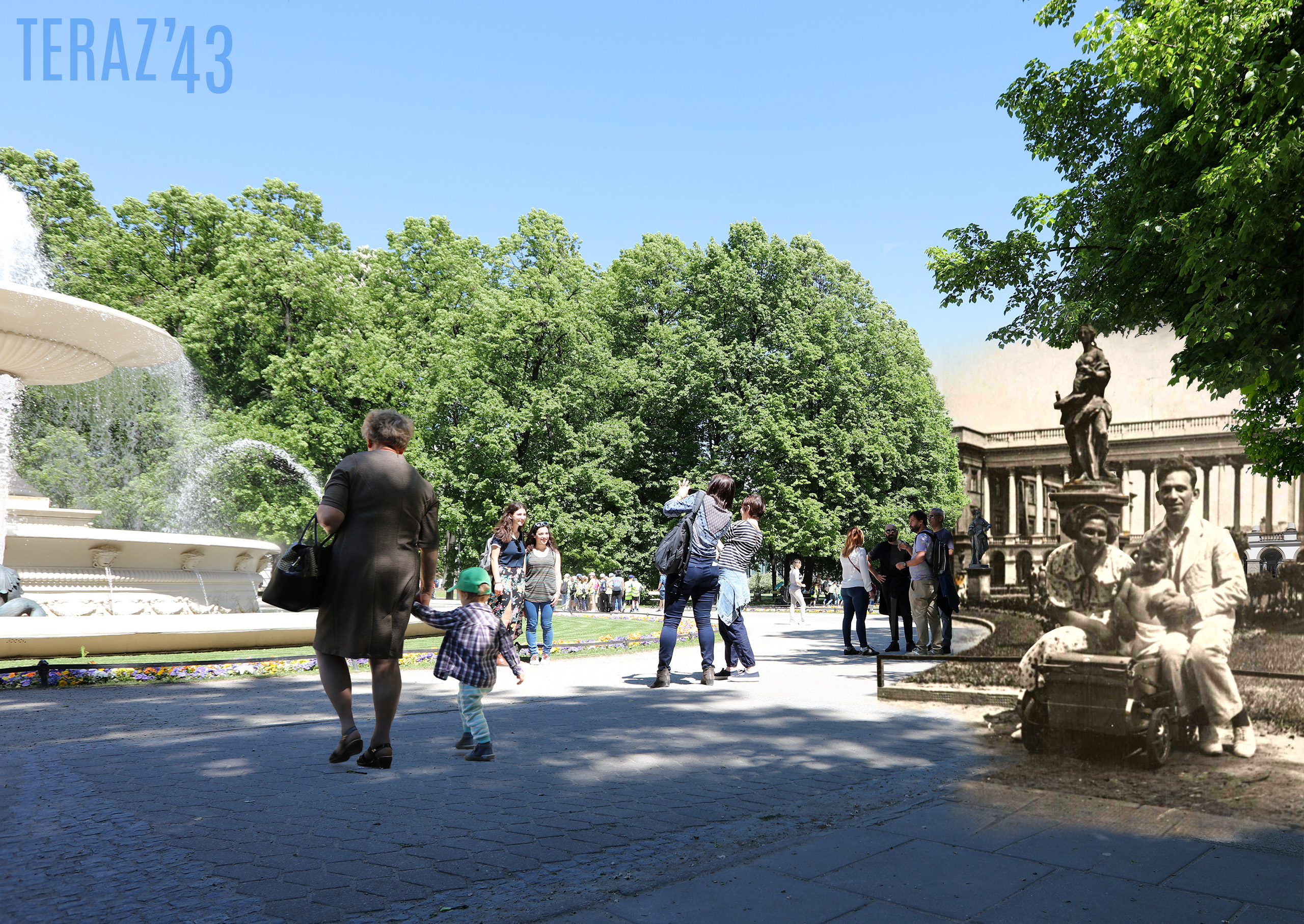 In pre-war times, a family pose for a photograph in Saski Gardens. Saski Palace looms magestically in the background.Marcin Dziedzic/Teraz ’43

“I didn’t just want to show fear, hunger and death,” he says. “People still worked, people still fell in love. I wanted this part of everyday reality to shine through as well.” 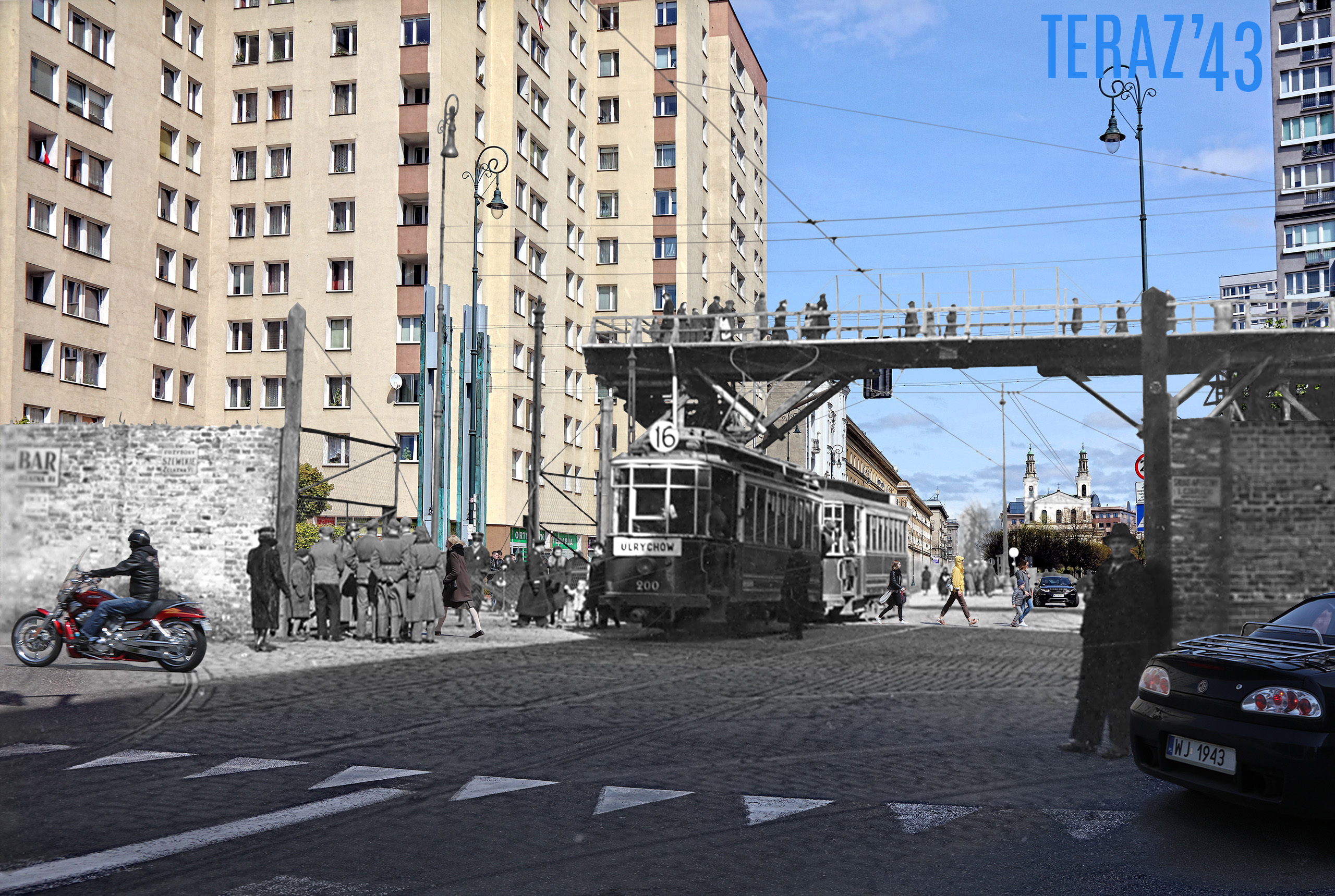 On Chłodna, Jews cross a bridge that was built to connect the small ghetto with the larger one.Marcin Dziedzic/Teraz ’43

Deeply evocative, the results of Dziedzic’s endeavours are a touching personal tribute to the Warsaw of old.

“If I lived in that era and had two best friends, one of them almost certainly would have been Jewish,” he says, “and in many ways that’s how I treated ‘Teraz ’43’: as a gift to the Jewish friend I never had.” 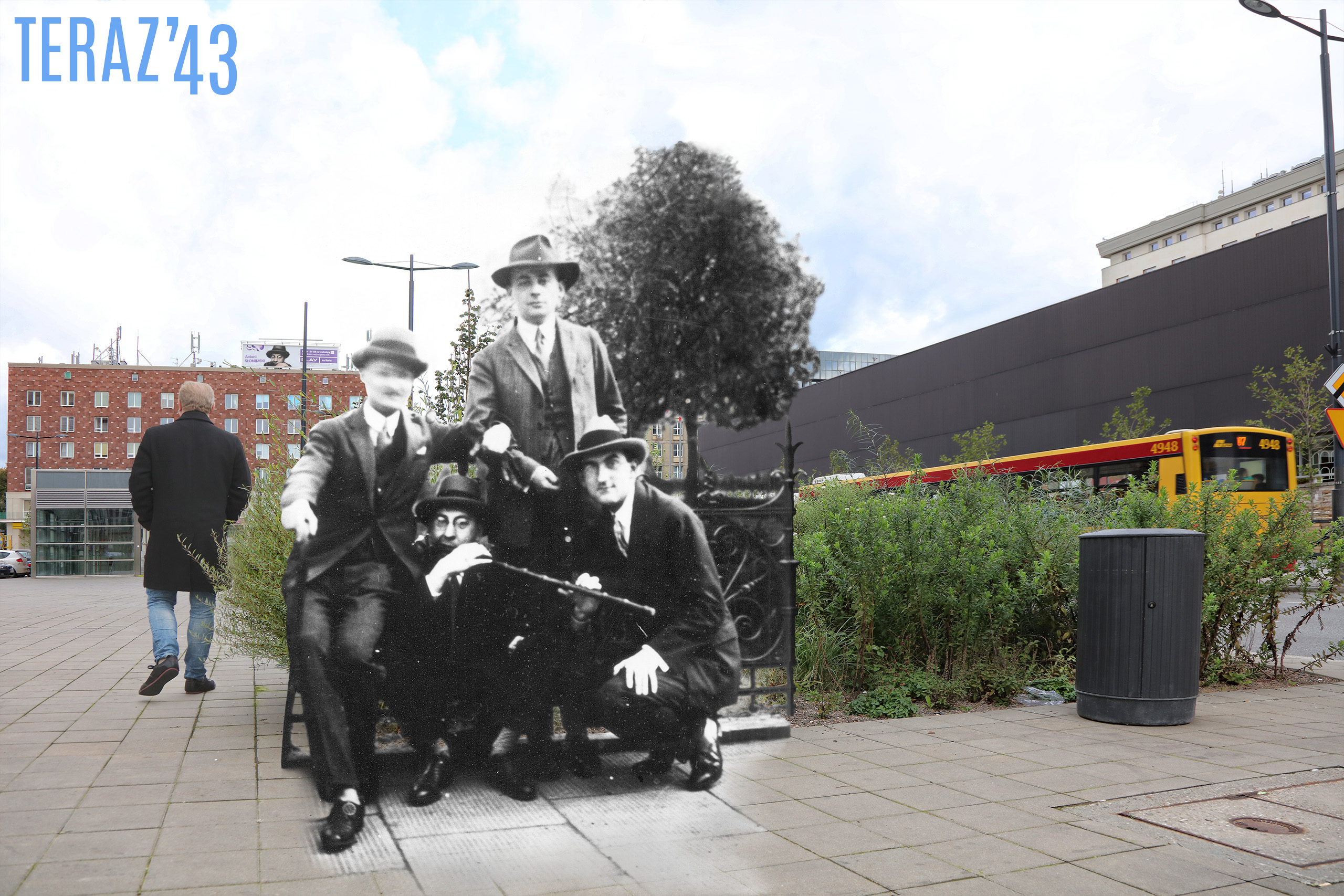 On Pl. Warecki, a group of friends fool around for the camera. For Dziedzic, the project was an intensely personal tribute to the Jewish friend he never had.Marcin Dziedzic/Teraz ’43

With much of the Ghetto rendered little more than a smoking heap of rubble, locating the exact sites that the pictures were taken was in itself an extraordinary time-consuming challenge that Dziedzic describes as “difficult but not impossible”. 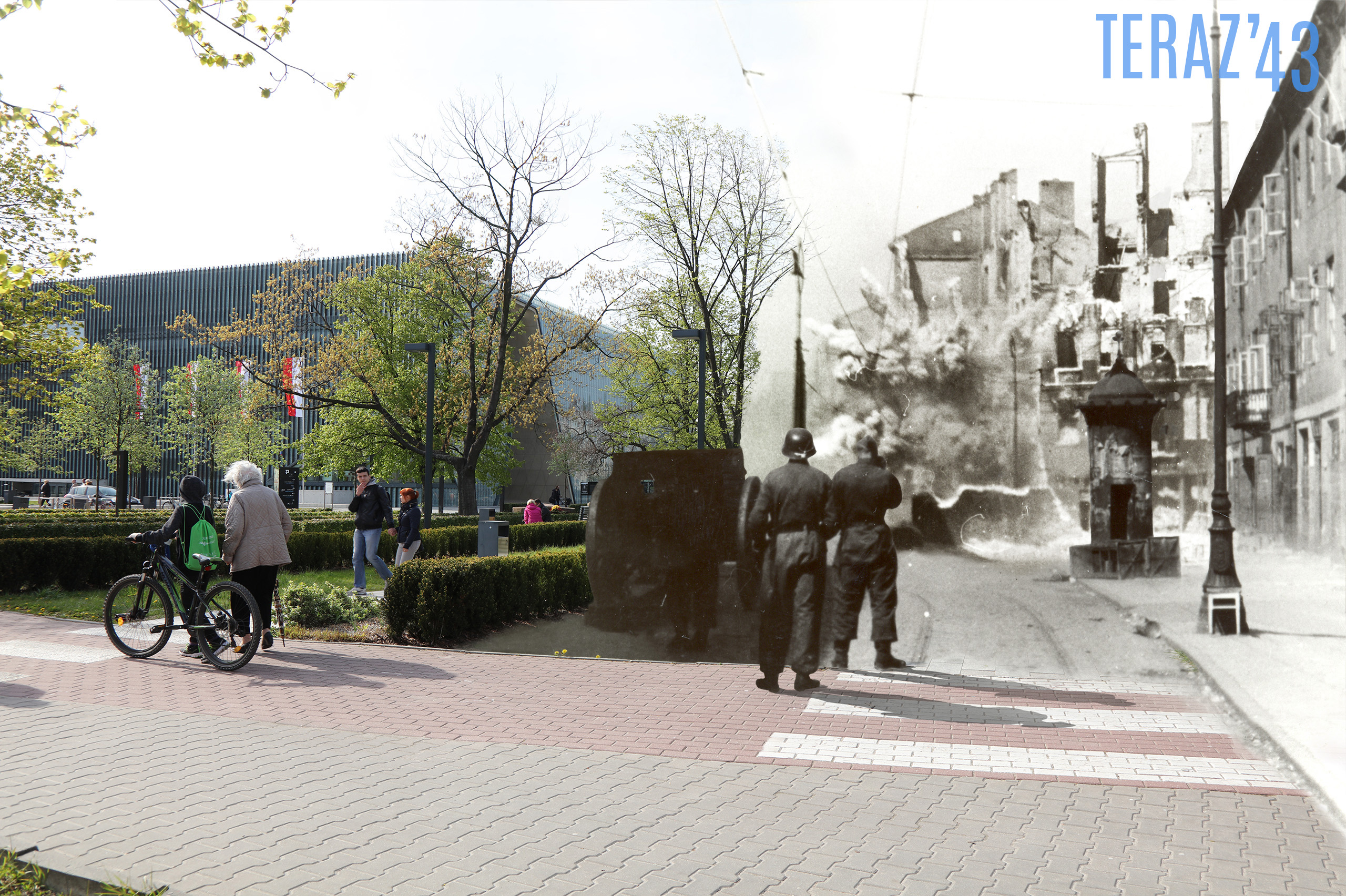 On the corner of Zamenhofa and Gęsia, German soldiers detonate explosives as they bid to eliminate all traces of the Ghetto. To the left, the POLIN museum stands.Marcin Dziedzic/Teraz ’43

Often enlisting the help of the Jewish Historical Institute and the POLIN Museum of the History of Polish Jews, the photographer spent countless hours ensuring his angles were entirely correct. 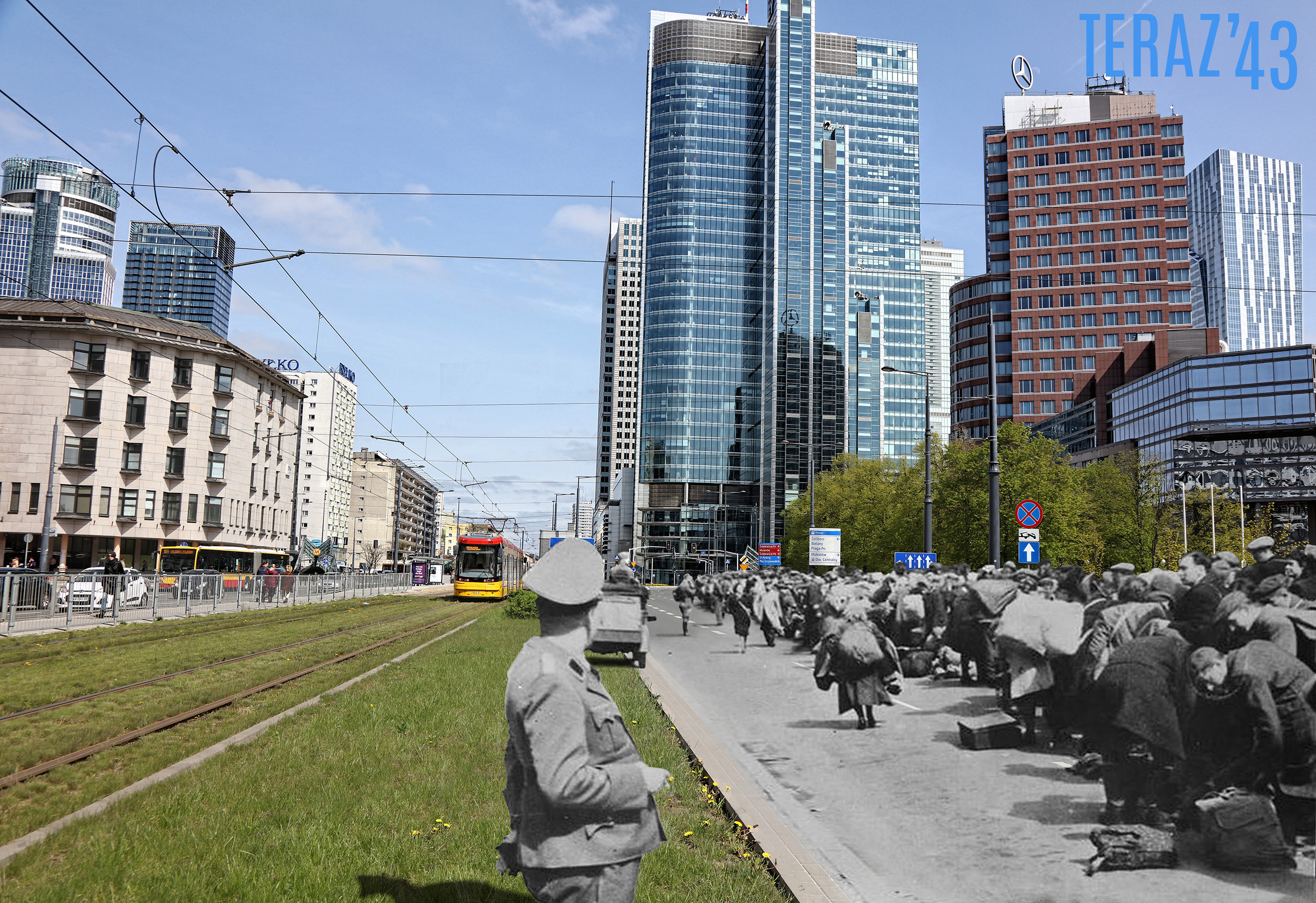 On the intersection of Prosta and Twarda, a Nazi guard watches as Jews march towards confinement.Marcin Dziedzic/Teraz ’43

“With ‘Teraz ’44’,” he says, “there were many parts of pre-war Warsaw that survived, but this wasn’t the case with the Ghetto. I found myself having to connect a non-existent city with a completely new one – but I like to think, that maybe because of this the message of ‘Teraz ’43’ is even more moving.” 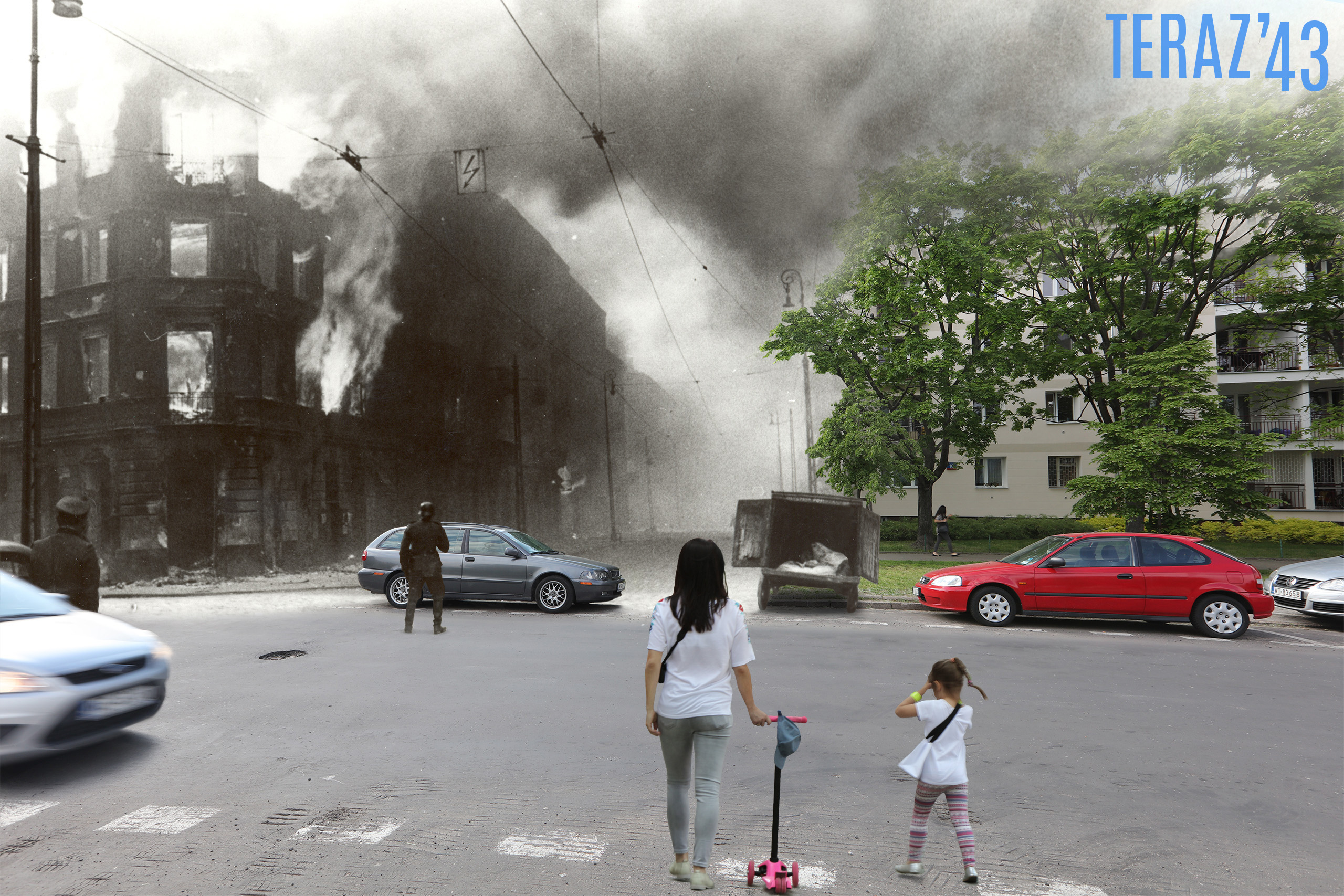 This latter point is difficult to dispute with many defining historic images lent a contemporary context that has made them all the more haunting. 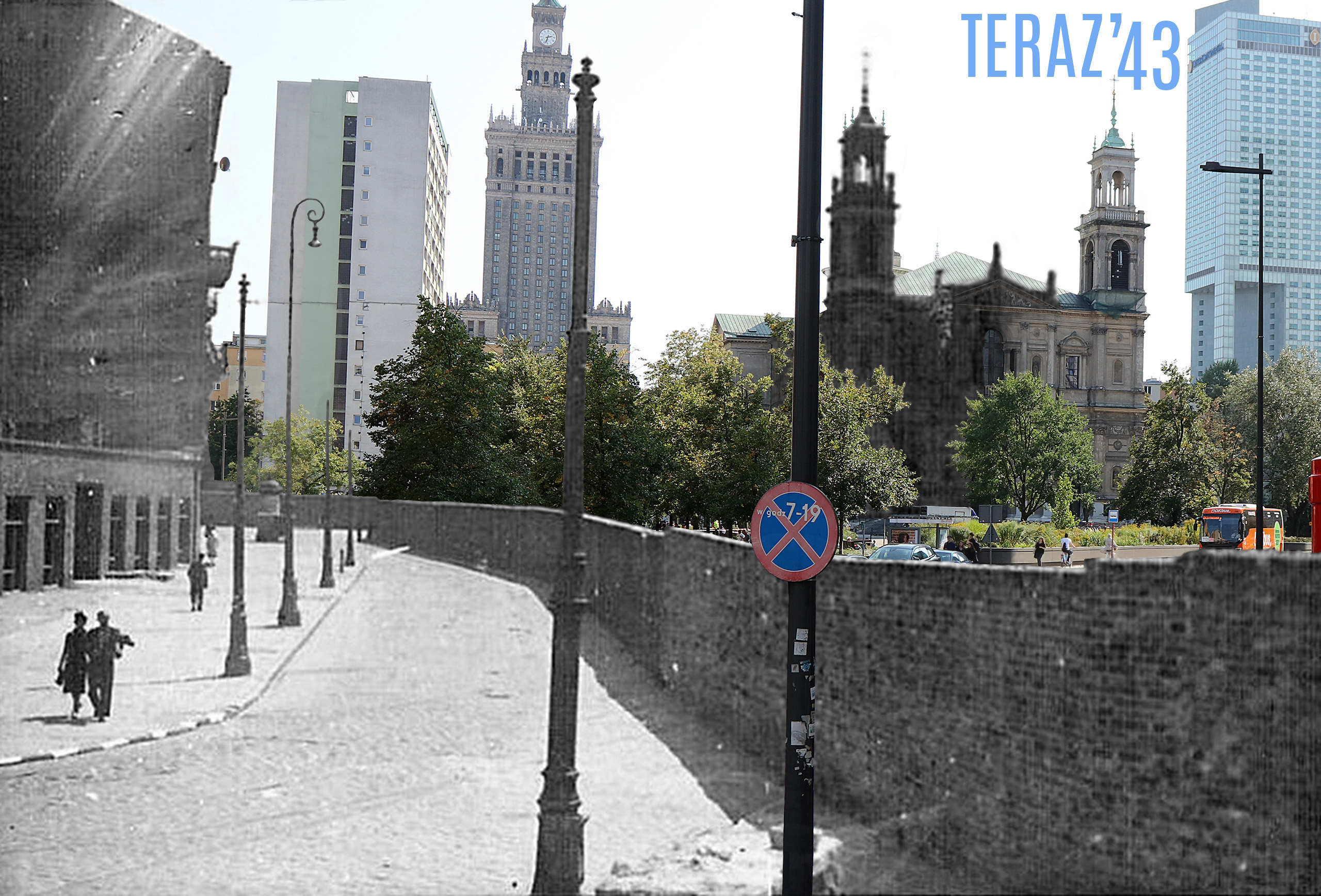 “Many people are familiar with the photo of the small boy being led away by Nazis with his hands raised,” says Dziedzic, “but not many know where it was taken. Finding that was a process of elimination and I was helped by a number of history enthusiasts: we looked at everything from the style of paving to the shaping of the gutter before determining that the scene took place at Nowolipie 34, which today is the corner of Nowolipie and Al. Jana Pawła II.” 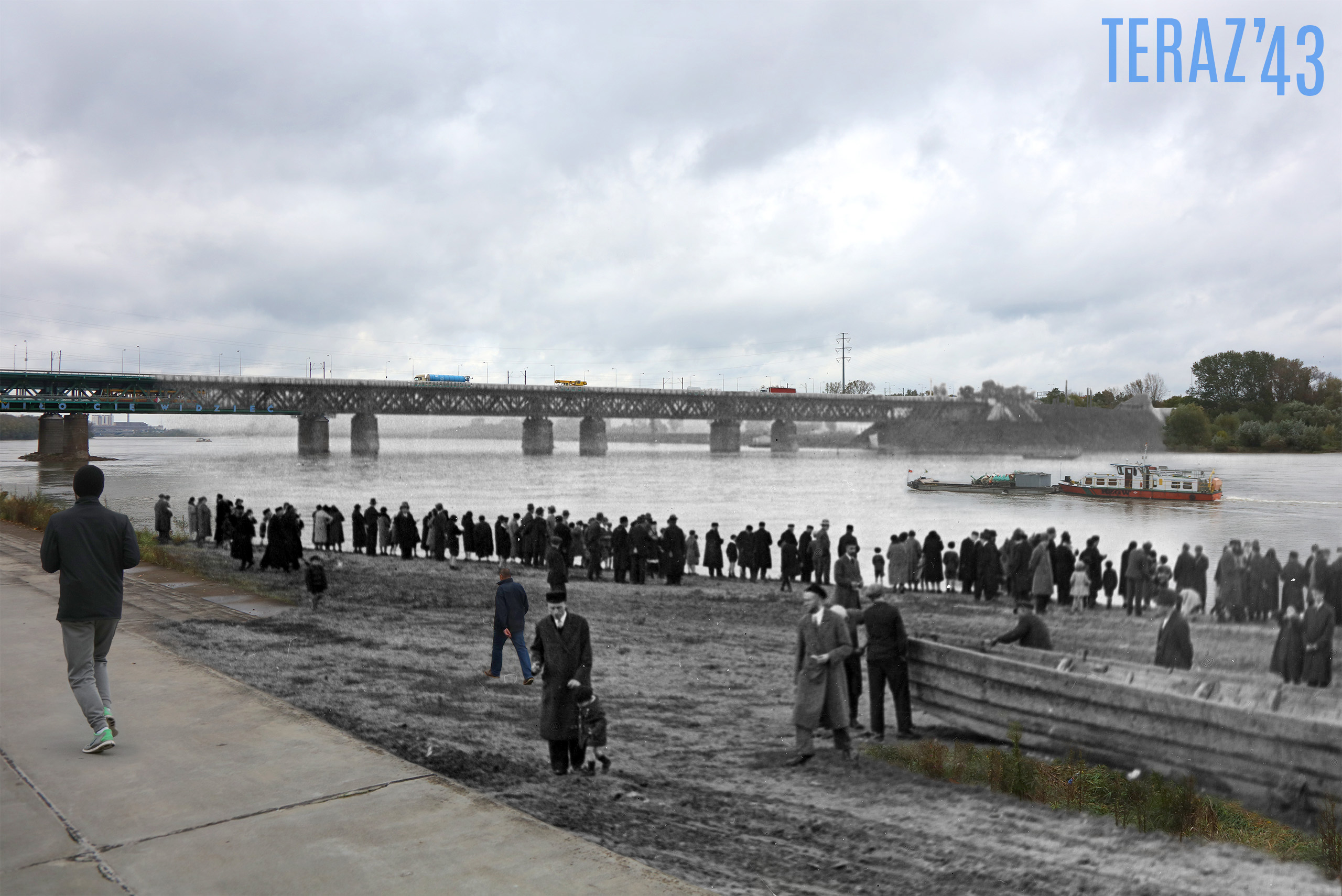 The photographer sought not just to remember the death and misery of the Ghetto, but also pre-war Jewish life. Here, families enjoy a day on the beaches of the Wisła.Marcin Dziedzic/Teraz ’43

Reliant on a mobile app to calculate the precise time of day to take pictures that would match up to the weather conditions featured in the original shots, his labours have been richly rewarded by a slew of praise. 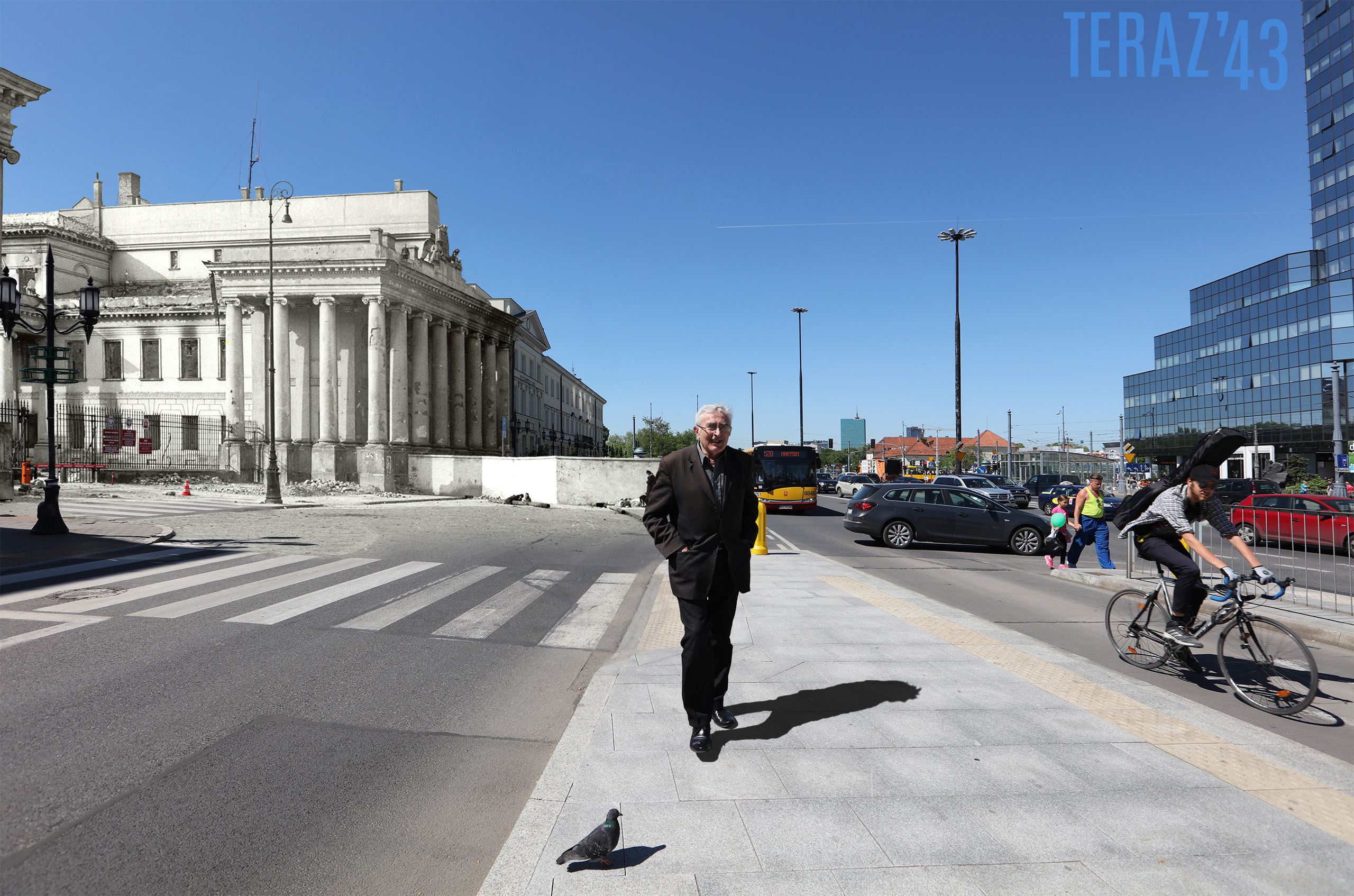 Visible in the background, the Ghetto wall cuts through today's Pl. Bankowy.Marcin Dziedzic/Teraz ’43

“The reaction from the people of Warsaw has been simply fabulous,” says Dziedzic, “but so too has the feedback from the media – and not just in Poland, but also places like Israel and the United States.” 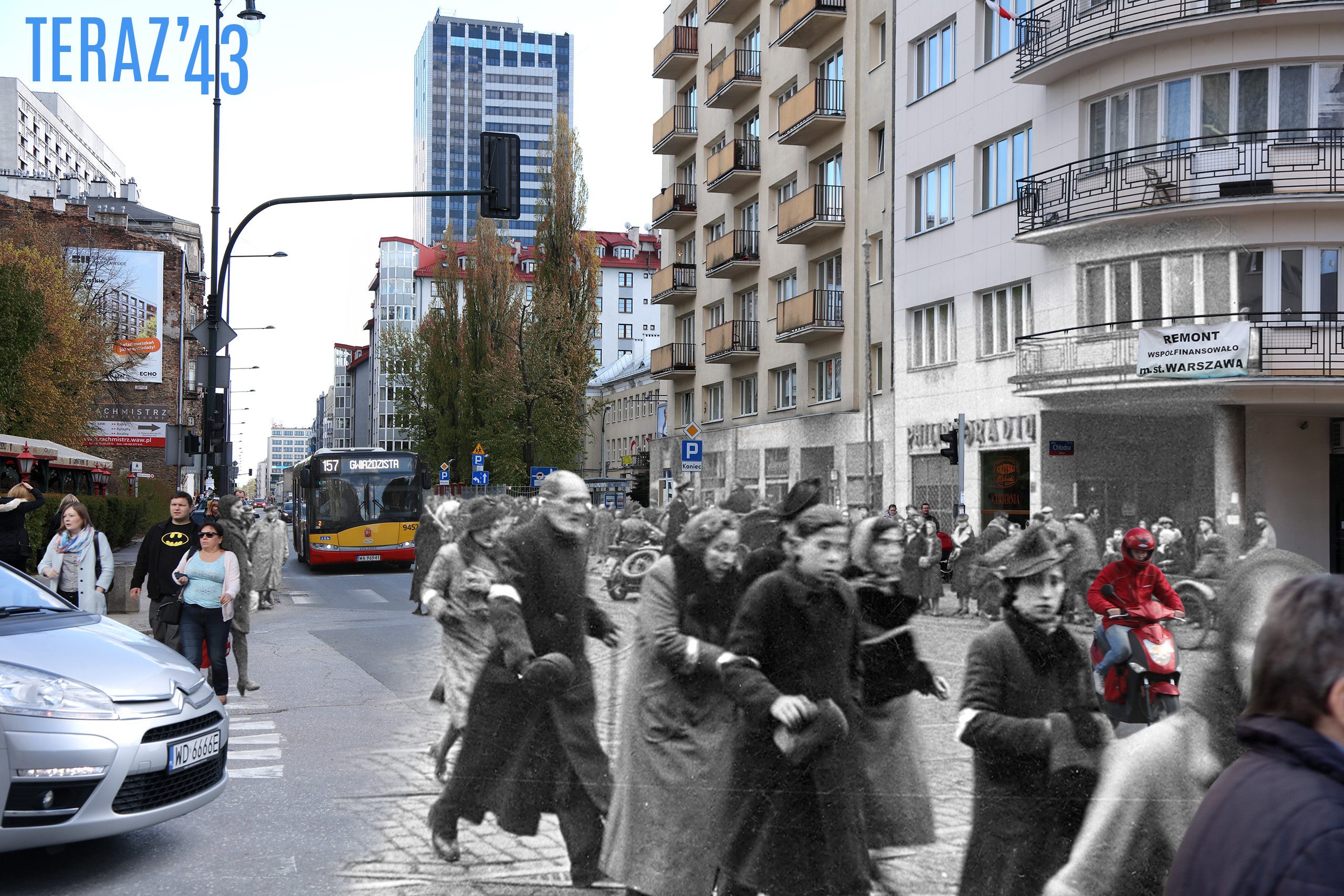 Wearing Star of David armbands, Jews walk down the intersection of Żelazna and Chłodna.Marcin Dziedzic/Teraz ’43

Published also in book format – with accompanying texts supplied by Magda Kicińska – for Dziedzic, however, the plaudits for ‘Teraz ’43’ pale in comparison to the importance of its underlying message. 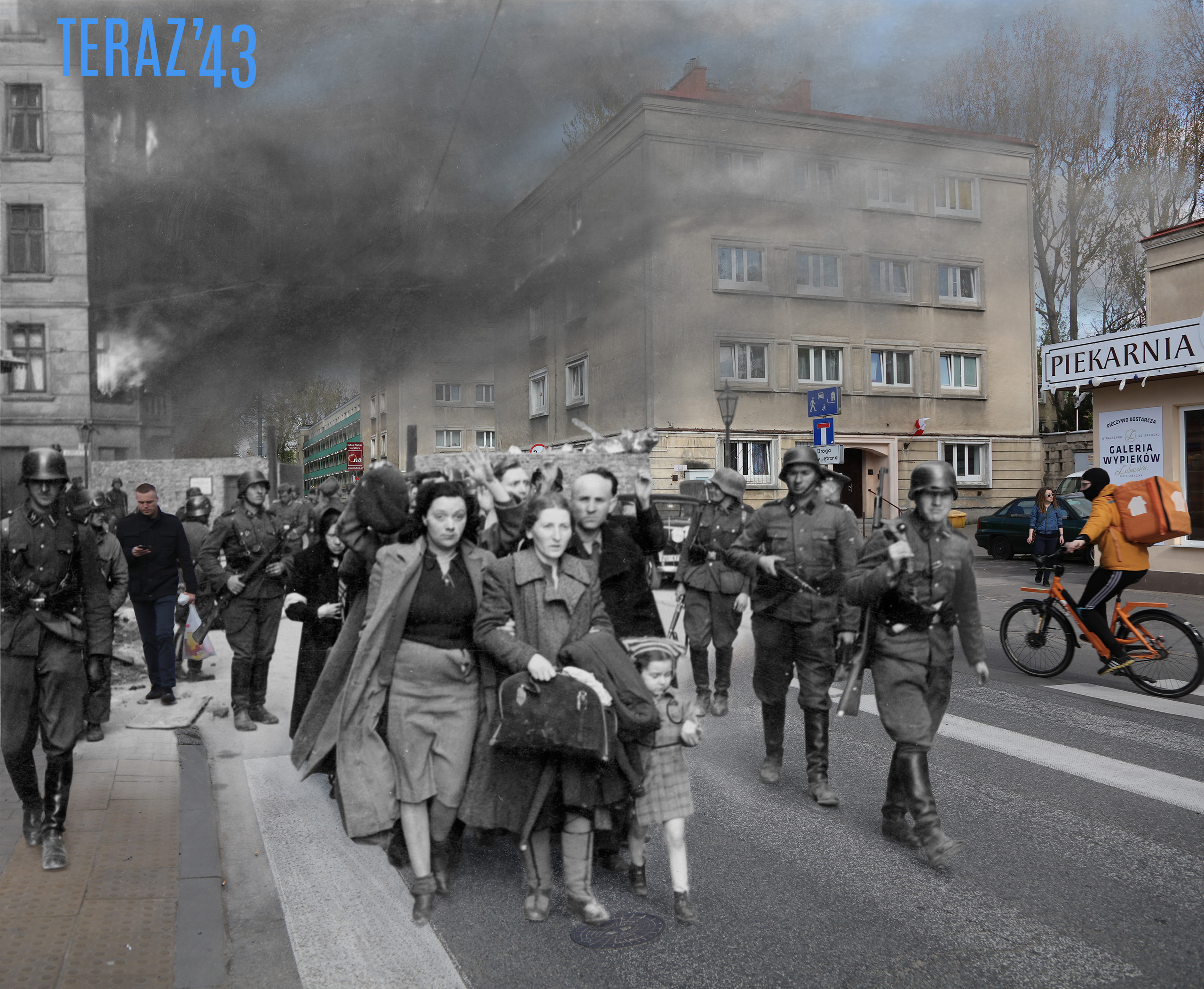 “I hope that ‘Teraz ’43’ provokes two things,” he says. “First, memories of the old Warsaw: the noisy, colourful, multicultural and multi-faith society that once thrived here. And secondly, I hope it sends a powerful, serious and thundering reminder about where hatred can lead us.”