Come on, surely, everyone is familiar with the gnomes of Wrocław? Having first appeared in 2001, the cheeky buggers have since swept the town like a ransacking horde. And, much like any plundering rabble, their numbers have grown to indeterminable size: some say 400, but others even more.

Without doubt, it’s all reached the point where they’ve grown to become one of Wrocław’s big pulls: one can only guess how many hectolitres of ink the world’s media has spilled writing about them, or how many millions of pictures have been snapped of them all. Put simply, they’re now the A-List celebrities of this magical city.

But ask any megastar about the flipside of fame, and they’re likely to rail against the baggage that comes with it: stalking photographers, intrusive fans, and silly rumours fanned by the press. And as any bona fide celebrity must contend with all that, so too must the gnomes of Wrocław.

For over a decade, you see, stories have circulated about their political leanings – that the little fellas are actually anti-Communist heroes that commemorate the city’s battle against bad. Yet while this widely reported story makes a good yarn, it’s not actually true – at least, not entirely.

To separate fact from fiction one must first look back to ’80s Poland. While historians rightly honour the Solidarity movement for helping topple the totalitarian system, this wasn’t the only movement pounding the pavements protesting against the regime. Under the command of Major Waldemar Fydrych (the self-styled Commandant of Fortress Wrocław), the Orange Alternative sought to defy Communism via a wave of peaceful actions defined by their surrealism.

Choosing to hold many of these in Wrocław, their escapades often followed bizarre dwarf-related themes. These reached a zenith in 1988 when 10,000 people converged on Świdnicka street to cavort in conical hats and demand “Freedom for Dwarves”. 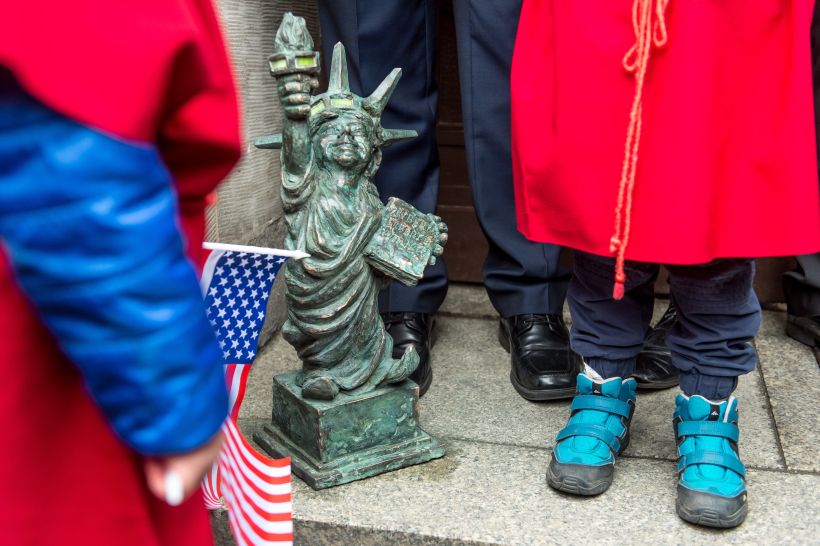 With the event enshrined in local legend, the city chose to remember this Revolution of Dwarves thirteen years later with the unveiling of Papa Krasnal: a tubby-looking figure with a pointy head and playful smirk. Positioned on Świdnicka street, on the very spot the parade kicked-off at, this was and is the only dwarf in town with an anti-Communist agenda. The others? Well, they came later…

In 2005 artist Tomasz Moczek found himself recruited by the city to create five gnomes to reflect different historical and the cultural aspects of this venerable town.

Completely different from Papa Krasnal in their style, size and actual message, this new mob (featuring a sabre-wielding fencer, a hatchet-toting butcher, a pair pushing a rock, and another doing his laundry) were never intended to be seen as political agents. “I just wanted to create something that hadn’t come before, something that was universal and could become a tourist symbol of the city,” Moczek tells The First News. “My gnomes were never political, they were never anti-Communist.”

That being the case, just where does the confusion stem from?

“It’s all my fault,” Dean, a Warsaw-based journalist speaking on the condition of an assumed name told The First News. “It was 2005, and at the time I was working on a guidebook that, among other cities, also covered Wrocław.

Truthfully, I can’t remember why, but I either hadn’t done my research or chose to pepper up the facts: essentially, what I did was write that the newly added gnomes were a continued homage to the Orange Alternative.” 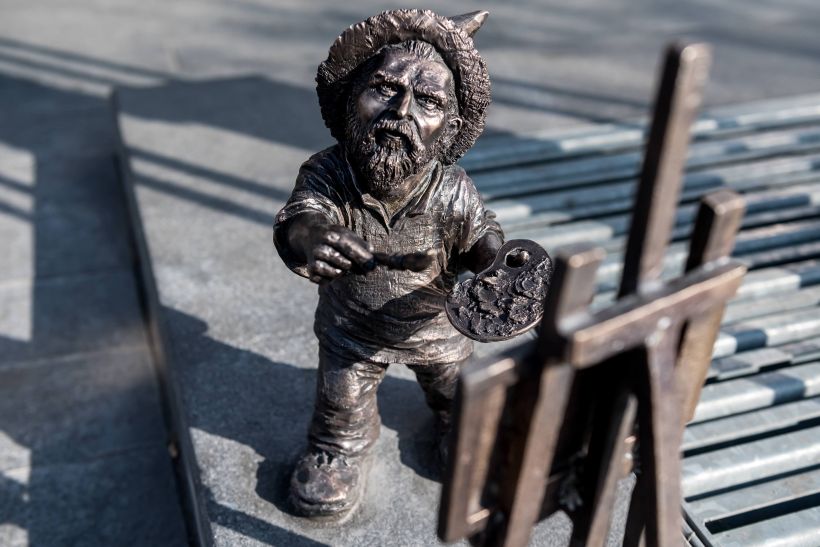 It’s a fraud that wouldn’t have mattered so much had Wrocław’s gnome population remained at that level. “Instead,” reflects Dean, “more kept popping up – even worse, this population explosion coincided with a tourist boom that still hasn’t stopped: all of a sudden, everyone was reprinting my story and claiming it as fact.”

To this day, it’s a myth that persists. “Once a rumour starts,” rues Dean, “it becomes impossible to stop. I don’t think there’ll ever be a time when the real story is realigned with the truth – everyone seems happy to perpetuate my tale, and I guess I can understand: after all, 400 anti-Communist gnomes sounds much better than one.”

For Tomasz Moczek, the confusion that surrounds his creations doesn’t seem to matter. “Of course,” says the artist, “spontaneous associations will occur. I like how people have created their own stories around my gnomes and I think it’s a beautifully unexpected twist to the project: for instance, the most popular of my gnomes are now commonly known as the Sisyphuses, though to me they were always nothing more than two ‘fools’ pushing a boulder.”

Instead, a more gnawing concern for the artist has been the growing number of copycats that have emerged in recent times.

Having authored somewhere between 100 and 150 gnomes, each cast in bronze and weighing four to five kilos, Moczek has been left bewildered by the amount of plagiaries that have appeared over the years. “It’s theft, that’s what it is, people have taken advantage of my concept without even speaking to me first – I’m now even hearing about carbon copies turning up in different cities!”

For all this, however, with the rough comes the smooth and the compensatory knowledge of a job well done – when Moczek’s first gnomes started appearing, could anyone have guessed the global impact that they would make?

Now well and truly mapped by the international travel press, never has one city owed so much to a multitude of gnomes.

All the fun of the fair: Must-see St. Dominic’s fair kicks off in Gdańsk next week