It is said, that behind every great man there's a great woman. Sometimes it is a wife or a lover, but in many cases it is a great man’s mother. This couldn't be more true than in the case of famous French writer Romain Gary and his Polish-Jewish mother.

In the first part of a new film by Eric Barbier called ‘Promise at Dawn’, French actress and singer, Charlotte Gainsbourg, can be heard shouting at a laughing crowd, in very reasonable Polish, that her little son will one day become a famous man - a decorated general, an ambassador, a Knight of the Legion of Honour, or even a great French writer.

The scene takes place in the early 1920’s, in a snow-covered provincial Vilnius, on the outskirts of Europe. Gainsbourg’s character is a lonely Polish-Jewish mother called Nina Kacew who is derided by the guffawing crowd. But it is she who will have the last laugh.

“Promise at Dawn” is the film adaptation of an autobiography written in 1960 by outstanding French writer, Romain Gary (1914-1980).

The author of more than 30 novels, Gary won the Goncourt Award, the most important literary prize in French literature, twice, thus becoming the only person in history to have done so. To avoid the rule that one author can only be awarded the prize once in a lifetime, Gary adopted the pen-name Émile Ajar.

If not underhand, his double win nonetheless cemented his reputation as one the country’s true literary greats.

Born Roman Kacew, Gary came from a poor Polish-Jewish family with little prospect of becoming anything more than a tradesman or ending up dead in a gas chamber in a Nazi German concentration camp in occupied Poland.

Thanks to his mother’s incredible will, strength and ambition, however, his path was to take an entirely different course.

First, she moved with her son from the cold bleakness of Lithuania, stopping off in the Polish capital Warsaw, before arriving in the sunny South of France, where she set up a hotel. 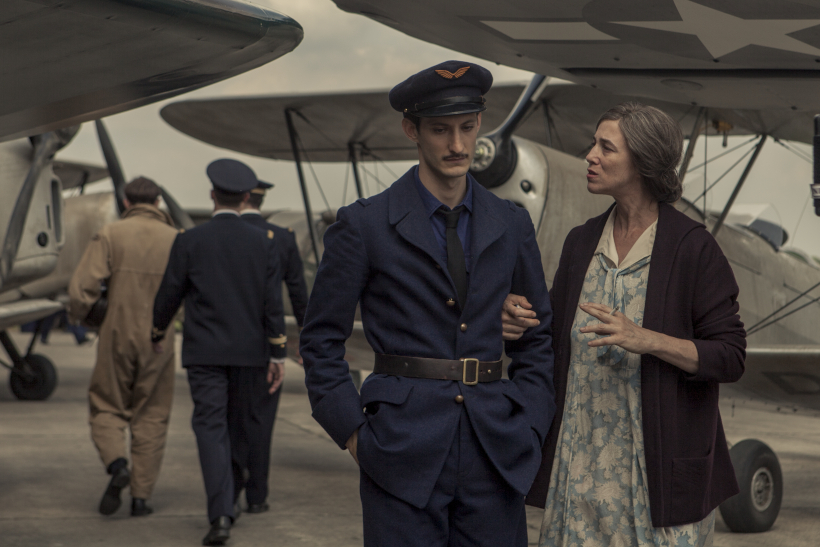 During WWII, the older Roman, played by Pierre Niney, joined the RAF as a bombardier-observer taking part in over 25 sorties. It was during this time that he changed his name to Roman Gary.
(Aurora Films)

It was there that young Roman/Romain started to write. Later, during WWII, he became an aircraft pilot in the French Air Force and after listening to General de Gaulle's historical radio appeal, he went to England, where, as a bombardier-observer in the RAF’s 342 Squadron, he took part in over 25 sorties, logging over 65 hours of air time.

During this period, he changed his name to Romain Gary. For his bravery in the war he was made Commander of the Legion of Honour. He published his first book and became a diplomatic, first in Bulgaria and Switzerland and in 1956 he was appointed French Consul General in Los Angeles where he hung out with Hollywood celebrities.

‘Promise at Dawn’ faithfully recreates every moment of his story with Pierre Niney playing the adult Romain Gary and the young Polish actor Paweł Puchalski, as the young Gary.

Prior to Eric Barbier’s film there was a 1971’s version directed by Jules Dassin, best-known for his classic noir films such as The Naked City (1948) and Rififi (1955).

In Dassin’s version the role of Nina Kacew is played by singer Melina Mercouri.