Commemorations took place early on Sunday morning just north of Gdańsk at the former Polish military storage depot at Westerplatte to commemorate the outbreak 80 years ago of World War Two.

Though the Polish defence of Westerplatte symbolises the start of the war and Poland’s commitment to fight for its freedom, at almost exactly the same time in the early hours of September 1, a drama of equal magnitude was unfolding a short distance away in the main Polish post office in the centre of Gdańsk.

A small group of postal workers defended the main Polish post office in the Nazi-controlled Free City if Danzig for 14 hours after waiting in vain for help from Poland that never came. Finally, hunkered in a petrol-flooded basement and with no other option, those who remained alive and had not escaped surrendered, only to be slaughtered directly on leaving the building or later at the hands of rigged German courts.

Their resistance has entered into legend as a symbol of the Poles’ bravery, fighting spirit, love of country and sacrifice. It was also a harbinger of the murderous cruelty and brutality of the German occupation of Poland. 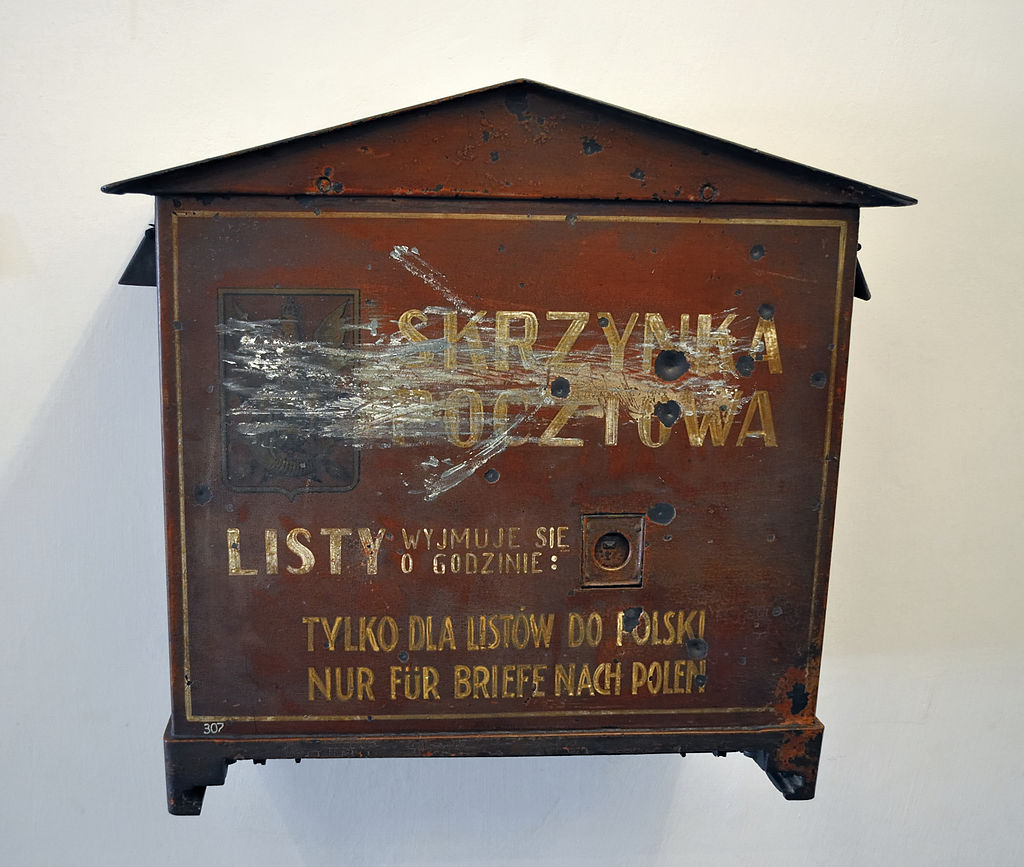 Tensions between Poles and Germans had been simmering for years in the League of Nations-established free city set up after World War One as a compromise that satisfied neither side.

Vastly outnumbered, making up only 4 percent of the population, the Poles jealously protected their interests in the city. Under international agreements, Poland had the right to its own railways, post offices, schools and transit warehouses at Westerplatte. From the post office on Hevelius Square it was possible to send letters to Poland without incurring additional costs for international mail, as well as to make phone calls directly to Poland or send a telegram.

Ten Polish post-boxes were installed in the centre of Gdansk bearing the Polish white eagle intended exclusively for correspondence sent to Poland. They were serviced by Polish postmen who walked around the city in distinctive green uniforms. After Hitler came to power in Germany, local German militias set themselves the goal of destroying the Polish symbols. 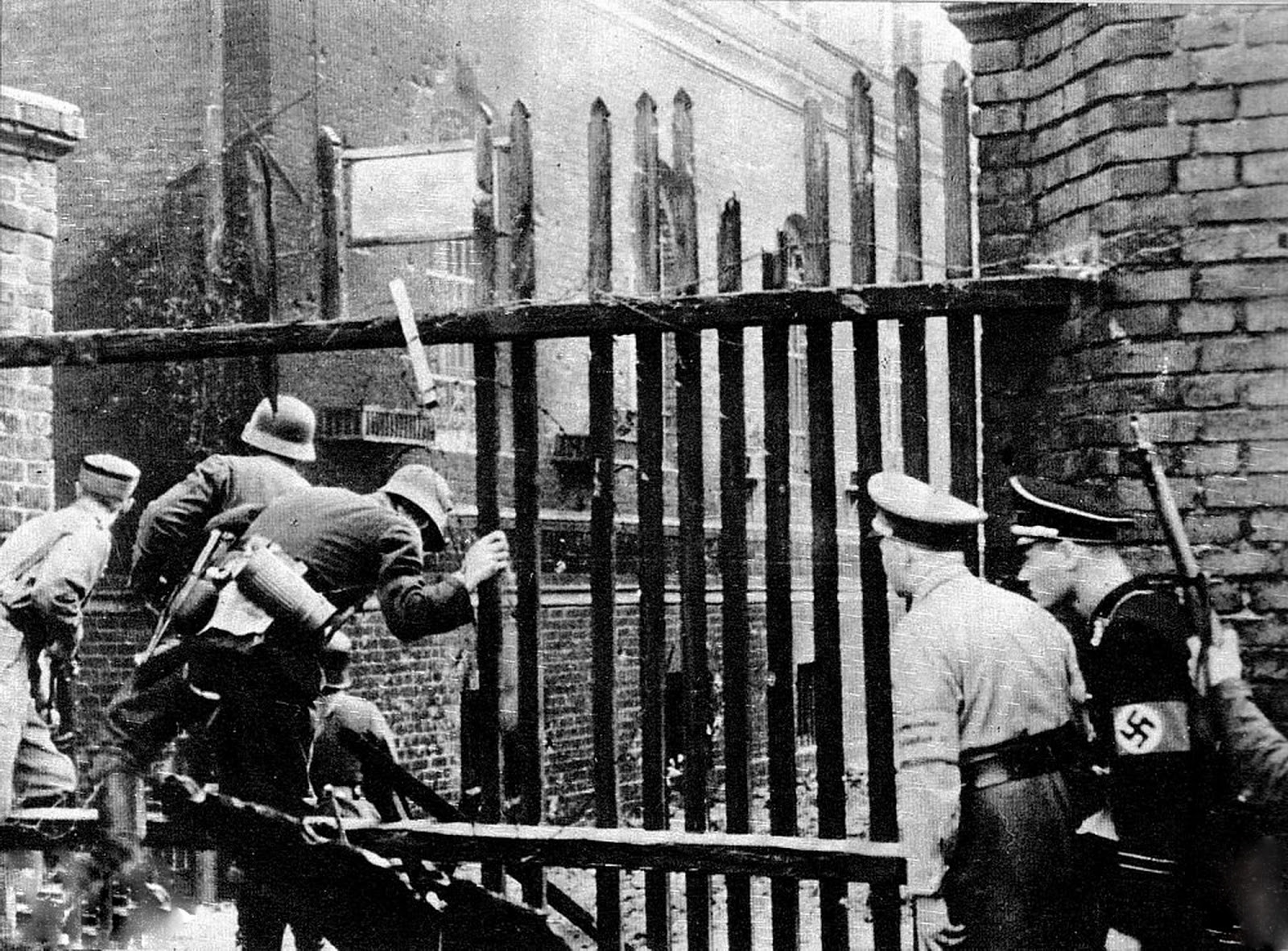 The Polish post-boxes were routinely vandalised and painted with abusive slogans. But every morning they were also meticulously repaired and repainted. The postmen were also threatened and on some occasions beaten up by local thugs.

For the Germans, the Polish post office was a symbol they hated and they wanted to destroy it at all costs. Therefore, in the summer of 1939, the Germans developed a plan to storm the building.

Their plan was to use a force of around 150 men to launch a simultaneous lightning attack on all levels of the building in order to quickly achieve a spectacular victory and not to give the Poles a chance to defend themselves.

The Poles on their part had prepared their defence well. Under the command of the experienced Polish army officer Konrad Guderski, the postal workers had undergone military training in Poland and their ranks were bolstered by reserve soldiers from Gdynia and Bydgoszcz who had fought in the uprisings in Silesia and Wielkopolska. 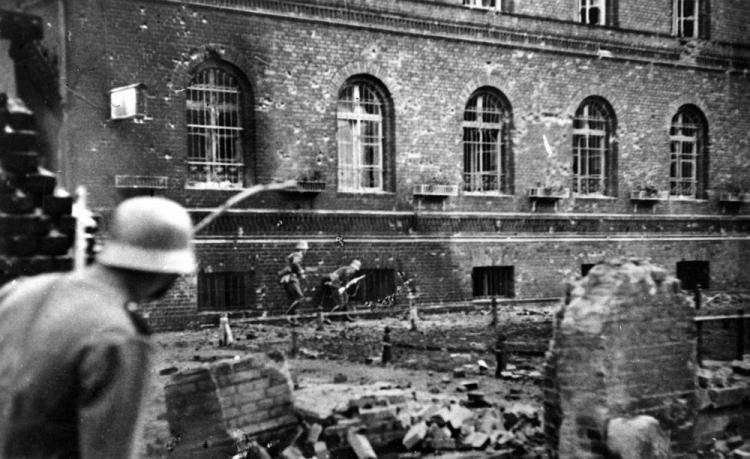 Despite being short on ammunition and outgunned the defenders fought off the Germans for 14 hours.PAP

According to Polish military plans, the post office was to defend itself for six hours until the arrival of the intervention corps from Pomerania. However, when it became clear that Poland was facing not just an attack on its interests in the free city but the threat of a general invasion by Germany, the Gdansk Intervention Group was withdrawn from the coast and sent deeper into Poland.

It is commonly believed that on the eve of the war there was so much chaos that the postmen waiting for relief were simply forgotten. However, some historians now believe that Poland wanted to make the defence of the post office a symbol of Polish resistance and sacrifice, and therefore did not inform them that no help would be sent. The defenders were to resist and be taken prisoner as an example to the world of Poland’s unyielding commitment to its freedom. 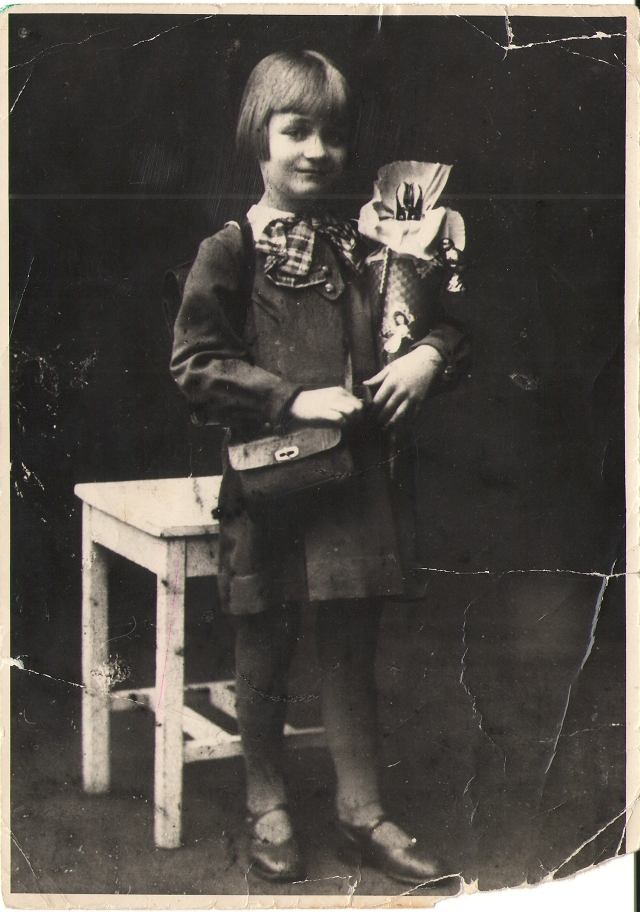 At 4:47 a.m. when the cannon from the battleship Schleswig-Holstein sounded the attack signal to open fire on the Military Transit Storage a few kilometres upstream at Westerplatte, the first attack on the post office was launched.

The assault was carried out by a special unit of the Gdansk Security Police and units of SS Wachsturmbann "E" and SS-Heimwehr Danzig supported by three armoured vehicles and artillery.

The German plan was to break through to the post office building from the adjacent National Employment Office. The Poles repulsed the first attack carried out from the front and prevented the Germans from entering through the broken holes in the walls.

It is believed that Guderski died from a shrapnel wound in this first attack. Polish army reserve officer Alfons Flisykowski took over command.

Around 11 a.m. German forces were reinforced by two 75mm calibre guns, but despite the artillery support the Poles fended off the next attack.

Around 3 p.m. the Germans interrupted their attacks and gave the Poles two hours to surrender. During that time, the attackers drafted in a 105mm calibre howitzer, and sappers dug a tunnel and placed a 600 kg explosive charge under the post office wall.

At 5 p.m., the charge was detonated and the Germans attacked through the partly demolished wall of the building. The attackers managed to occupy a part of the post office, and the defenders moved to the basement from where they tried to continue their defence. 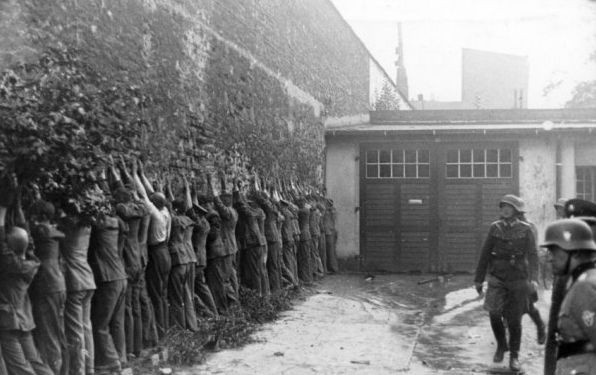 The survivors stand against the wall after their surrender.Polish Post Office Museum

Around 6 p.m. motor pumps were brought in to pump petrol into the cellars, which was then set on fire by flamethrowers.

After 14 hours of fighting, the defenders were exhausted, wounded, cut off from the world, running out of ammunition and without electricity and water. Dense smoke and fire made visibility and breathing difficult and the Polish army were nowhere in sight.

Among the flames, smoke and dust, post office director Jan Michoń feverishly looked for a white sheet. He found a towel, raised it above him and came out of the building only to be greeted by verbal taunts and a volley of shots that killed him immediately.

Next, Polish army reserve office Józef Wąsik came out, but was engulfed in fire from a flamethrower and died in agony.

The next victim was the post office’s caretaker. Then, the terrifying scream of a child was heard. Eleven-year-old Erwina Barzychowska, who was being looked after by the caretaker and his wife, was brought out of the basement. The small child ran around the ruined courtyard in flames. She died in hospital seven weeks later, having been left untreated.

Taking advantage of the confusion, five defenders managed to escape from the building through the sorting room and onto the roof by a fire ladder. Two of them, Franciszek Mionskowski and wounded Alfons Flisykowski, were arrested on September 2 and imprisoned with the others. 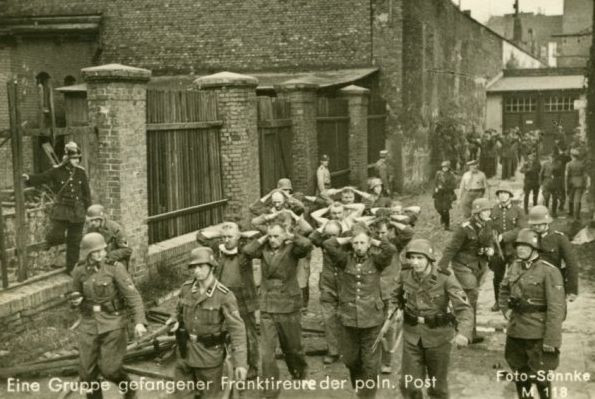 After their capture the survivors were sentenced to death by a German court.Polish Post Office Museum

The remaining four managed to escape and survive the war. Of the other defenders, eight had died in the battle. The remainder were arrested and underwent brutal interrogation.

Later in September 1939, 38 post office defenders were brought before a German court, which sentenced them to death for “partisan activity” in violation of international conventions and local law. On October 5th, the Germans carried out the sentence by firing squad.

The bodies were buried in an unmarked place, and for many years it was only known that it was located near Gdansk airport. In 1991, during construction work at Zaspa in Gdańsk, a mass grave was found in which the executed postmen were buried.

In May 1998, a court in the northern German city of Lübeck acquitted the defenders posthumously. The court found that in September 1939 the military law of the Third Reich under which Polish defenders were sentenced had not been in force in the Free City of Danzig.

The Lübeck court found that the actions of the members of the court that sentenced the postal workers could be classified as judicial murder.