The Miracle on the Vistula

One of the most overlooked but most important wars of the 20th century between the newly emerged Polish II Republic and Lenin’s fledgling Bolshevik regime reached a climax in August 1920 with the Battle of Warsaw.

The Bolshevik crusaders were hell bent on bringing the torch of revolution deep into Europe but against all odds, Poland’s Marshal Piłsudski beat back the Red Terror from the gates of Warsaw in what was dubbed the Miracle on the Vistula.

After the three empires, Germany, Russia and Austria, that had devoured and swallowed Poland over 120 years earlier had each imploded as a result of WWI, the circumstances were ripe for Poland to carve out its own state from the smouldering ashes of its bullying neighbours.

The Treaty of Versailles, an uprising in Greater Poland, three uprisings in Silesia and a snap war in Lithuania had helped Poland to secure borders to the north, south and west, but a potentially disastrous conflict awaited with the Bolsheviks that could have seen Poland plunged into subordination again.

Lenin’s Red Army was turning the tide against the White Russians in the post-revolution civil war. Meanwhile, Poland had taken the initiative and had made significant gains in Lithuania, Belarus and Ukraine, even taking Kiev without much struggle with Ukrainian allies in May 1920.

Chief of State Piłsudski was a now a hero at home, but his forces in the east were overstretched and a Bolshevik counter-strike was imminent.

General Tukhachevsky and his northern army drove the Poles back rapidly and by mid-July the Red Army was glaring hungrily at Poland’s capital. 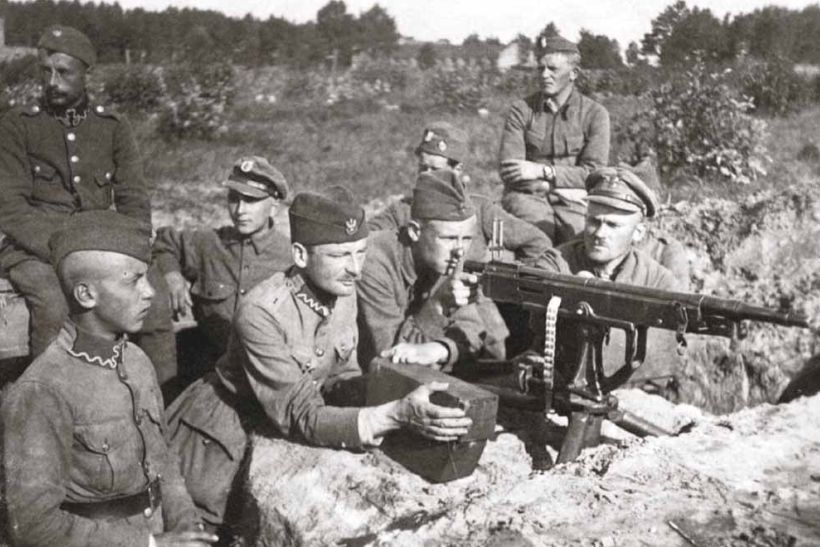 Polish soldiers man a defensive position near Miłosna, in the village of Janki.Public domain

In an ominous order of July 20, Tukhachevsky declared: “The fate of the world revolution is being decided in the west; the way leads over the corpse of Poland to a universal conflagration… To Warsaw!”

Piłsudski knew that the only way to defend the capital and prevent its encirclement was with a bold counter-offensive. The ambitious plan that he and General Rozwadowski thrashed out was for Polish forces to secretly regroup at lightning speed and then strike at a weak point between major Red Army battle groups.

If this was successful, the Poles would then be in a perfect position to deliver the decisive blow. The plan was fine on paper, but Poland was a brand new country and its lands had been ravaged during the First World War leaving its economy virtually non-existent. It was desperately short of weapons and ammunition and was dependent on the victorious Allies.

The French sent supplies, but these were blocked by the Germans, Austrians and Czechs who were banking on a Polish defeat. Socialist sympathisers in the port of Gdansk also stopped vital equipment from reaching Warsaw.

The Hungarians came to the rescue by sending to Poland at no cost millions of rounds of ammunition and tens of thousands of machine guns as well as other equipment.

When the battle got underway, intense hand-to-hand fighting took place in Radzymin, just 25 kilometres from Warsaw, and the town changed hands many times. A major success came when the Poles captured one of the Red Army’s two radio receivers in Ciechanów.

Now that they knew the frequency, the Poles rendered the second receiver useless by reading the Book of Genesis non-stop over the airwaves for several crucial days, which meant that the Bolsheviks were unable to receive orders from the command based in Minsk.

In fact, thanks to the work of a young code-breaker in 1919, the Poles were able to read Bolshevik signals throughout the war and knew about troop numbers, movements, losses, morale and orders often before the intended recipients.

Piłsudski’s plan to exploit a weak opening between two Russian fronts worked like a charm and his rapid drive north threw Tukhachevsky’s army into confusion and chaos.

With units out of contact with each other, some continued the advance onto Warsaw while others made a panicked retreat. It was a rout. The Poles harried the scattering Bolsheviks and some divisions fled across the border into East Prussia where they were immediately interned, while others were forced to surrender in Poland.

Piłsudski returned to Warsaw with his reputation at a zenith. After protracted negotiations, the Polish-Soviet border was finally rubber stamped in the Treaty of Riga and Poland received Lwów, and vast territories inhabited by Lithuanians, Belarusians and Ukrainians, which Poland would hold until September 17, 1939.

Edgar Vincent D’Abernon described the Battle of Warsaw as the 18th most important battle in world history and the Polish victory is credited with saving Europe from a series of Bolshevik revolutions in Hungary, Austria, Germany and even France.

We can never know what would have happened if Warsaw had fallen in 1920, but Poland’s victory, a tactical masterpiece against all the odds, certainly ended Lenin’s plans to spread Bolshevism throughout the continent.