“The Lewandowski of his age!” Exhibition celebrates the remarkable life of Ignacy Paderewski

On the 160th anniversary of Ignacy Paderewski’s birth, a section of Warsaw’s historic centre has been transformed into an open-air exhibition devoted to the Polish statesman and pianist.

Titled ‘Ignacy Jan Paderewski. I will serve until death’, the display commemorates the remarkable life of one of the greatest Poles of the twentieth century. Pianist, composer, activist, polyglot, orator, politician, statesman, humanitarian, businessman, patron of art and architecture, film actor, icon: Paderewski was all these and more. 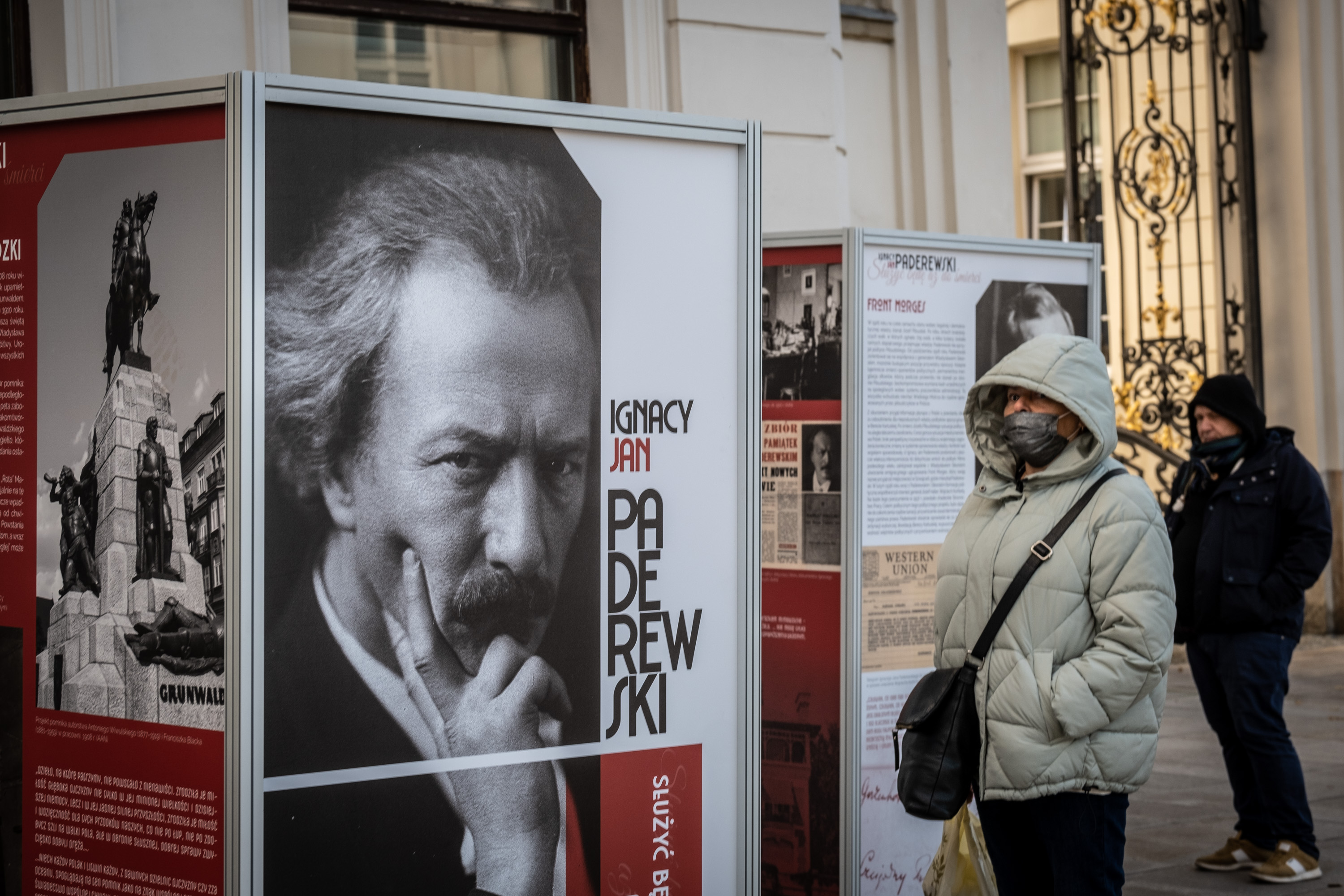 The exhibition retells Paderewski’s story via sixteen informational panels and leaves no doubt about the fame and celebrity he enjoyed in his lifetime.Kalbar/TFN

At the turn of the nineteenth and twentieth centuries, his fame and influence were enormous and it was thanks to his efforts that US President Woodrow Wilson demanded independence for Poland in the 13th point of his ultimatum to the Treaty of Versailles.

Placed on the pavement outside Krakowskie Przedmieście’s National Culture Center, the exhibition retells Paderewski’s story via sixteen informational panels and leaves no doubt about the fame and celebrity he enjoyed in his lifetime.

“He really was the Robert Lewandowski of his age,” exhibition curator Wojciech Bobowski told TFN. 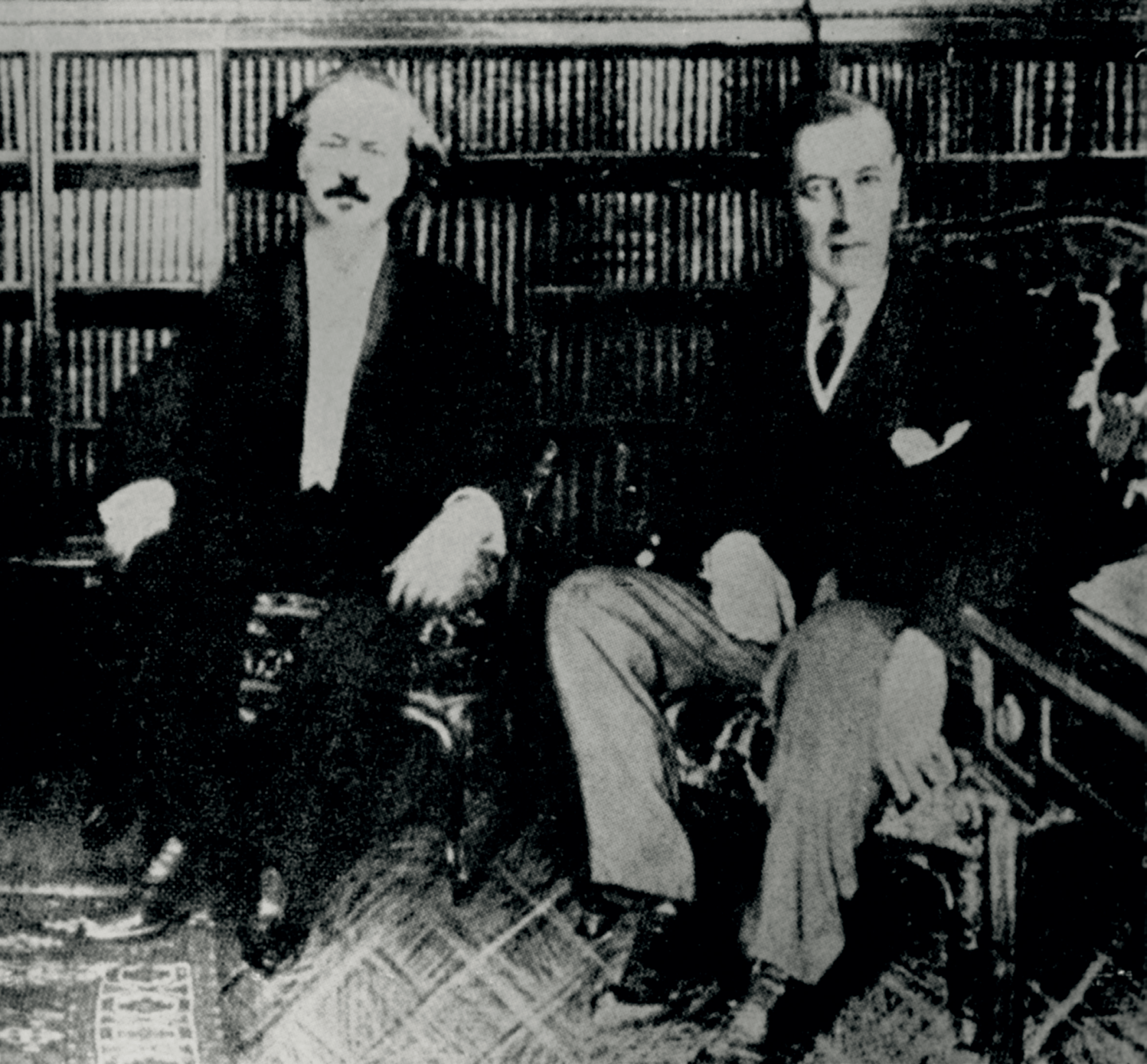 Thanks to his personal influence, Paderewski was able to reach out to President Thomas Woodrow Wilson.Archiwum Akt Nowych

The comparison is by no means far-fetched. One of the first major celebrities of early 20th century America, Paderewski was the highest earning and richest artist in the world.

“As a virtuoso artist and an extraordinary personality, he drove audiences into states of exaltation that can be compared to the euphoria at the concerts of the greatest rock stars,” Bobowski said.

“He used his fame in the United States to campaign for the creation of a strong, independent Poland with access to the sea,” he added. 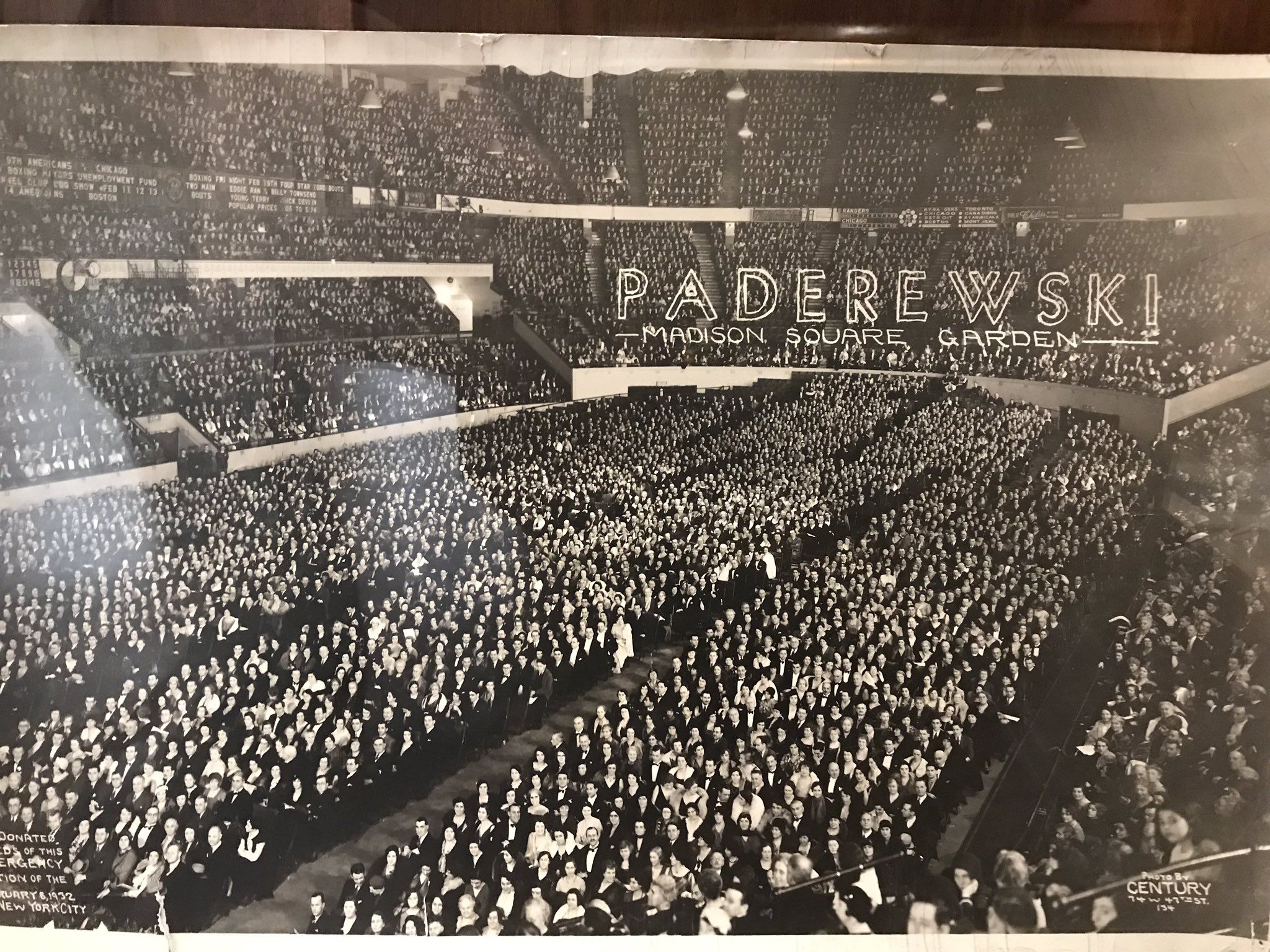 It is this episode which has earned Paderewski his place in the pantheon of great Poles and much of the exhibition’s real estate has been given over to this.

Thanks to his personal influence, Paderewski was able to reach out to President Thomas Woodrow Wilson. When they met, Paderewski was so famous that it was the President of the United States who was honoured to meet such a great musician.

At the meeting, held in the White House in January 1917, Paderewski set out the case for the rebuilding an independent Polish state. Wilson was deeply impressed by his vision and asked Paderewski to develop a plan for post-war peace in Central Europe. 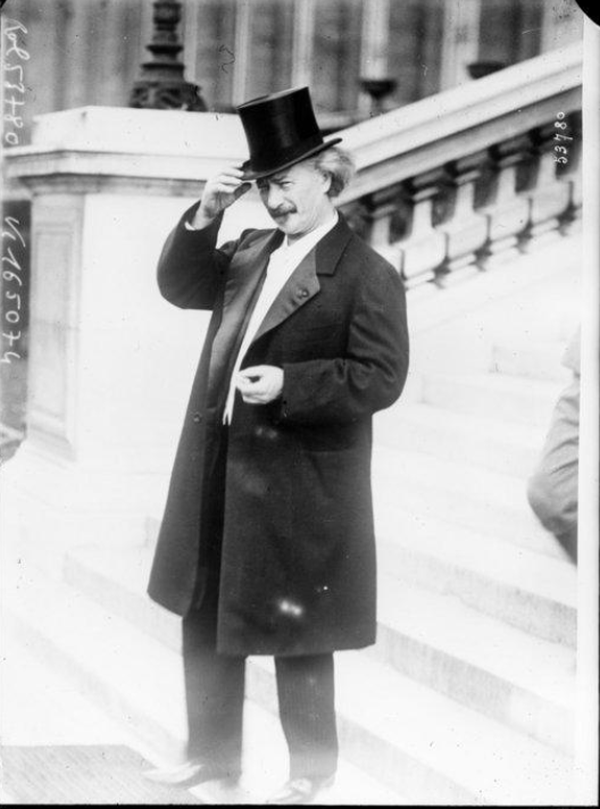 Paderewski’s campaigning bore fruit when Wilson made his famous ‘Fourteen Points’ address to Congress, point thirteen of which concerned Poland.

It spoke of the need to establish an independent Polish state, “which should include the territories inhabited by the indisputably Polish population, which should be assured a free and secure access to the sea and whose political and economic independence and territorial integrity should be guaranteed by international covenant.”

This vision turned into reality when Paderewski signed the Treaty of Versailles in June 1919 as Prime Minister of newly independent Poland. 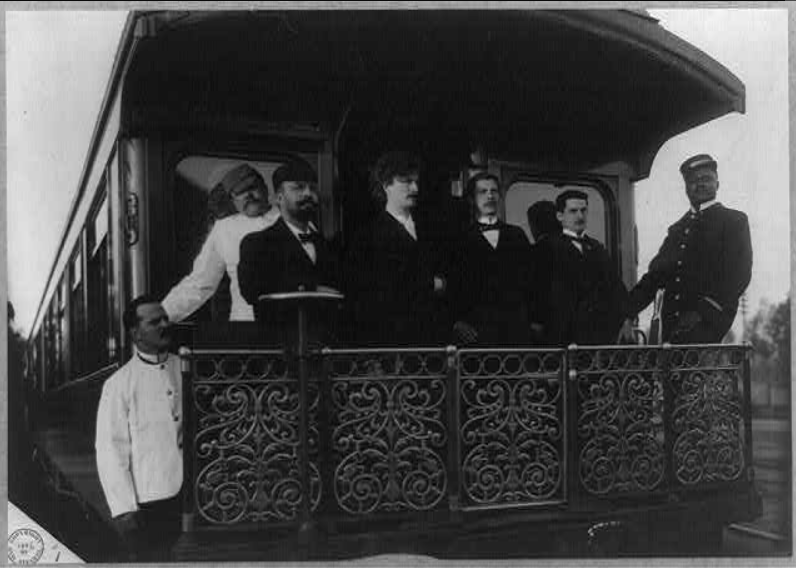 Paderewski travelling through the US by train; having conquered Europe, he would later establish himself as one of the first major celebrities of early 20th century America.United States Library of Congress

Originally planned to be staged indoors, while the ongoing pandemic has forced the exhibition outside – and the cancellation of the planned multimedia elements – there remains plenty of information to soak up.

The panels cover all the main stages in the pianist’s life and highlight his achievements. For example, one tells of the time in 1910 when he engineered the biggest public celebration of the era. It was then that 150,000 Poles gathered to witness the unveiling of a huge bronze statue of King Jagiełło in Kraków on the 500th anniversary of the Battle of Grunwald. Paderewski funded the monument from his own pocket. 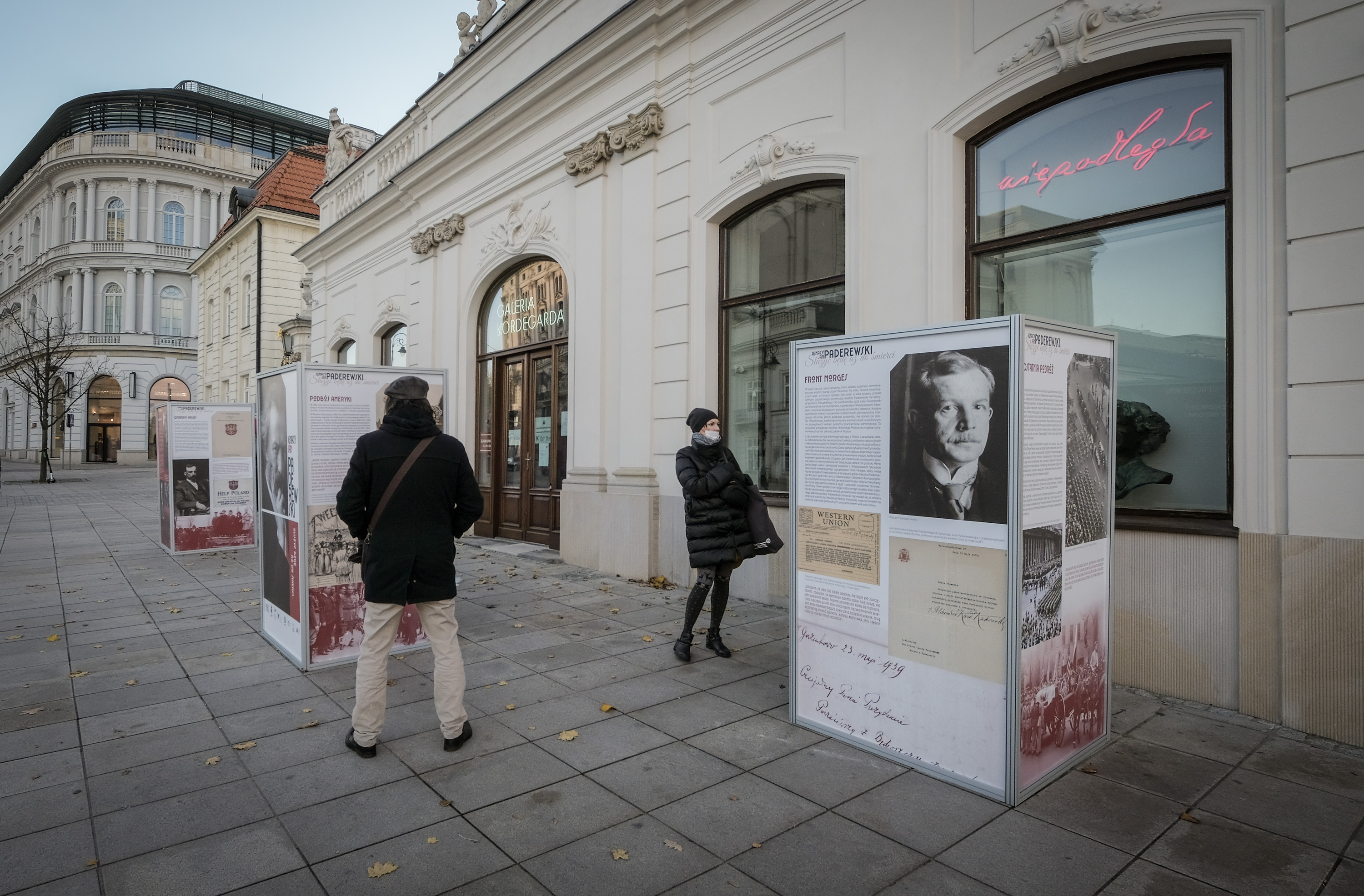 The panels cover all the main stages in the pianist’s life and highlight his achievements.Kalbar/TFN

Elsewhere, we learn of his early life. Paderewski was born on in November 1860 in the village of Kuryłówka in Podolia. His mother died several months after the birth. His father was arrested and sent to prison for his involvement in the January Uprising.

His musical talent was spotted early, and he was sent to Warsaw at the age of twelve to the Music Academy where Chopin had previously studied. His career gained real momentum in 1888. After a series of concerts in Paris, the Pole established himself as a European star and, following a successful tour in England, where he played for Queen Victoria, he turned his gaze across the ocean to the United States. 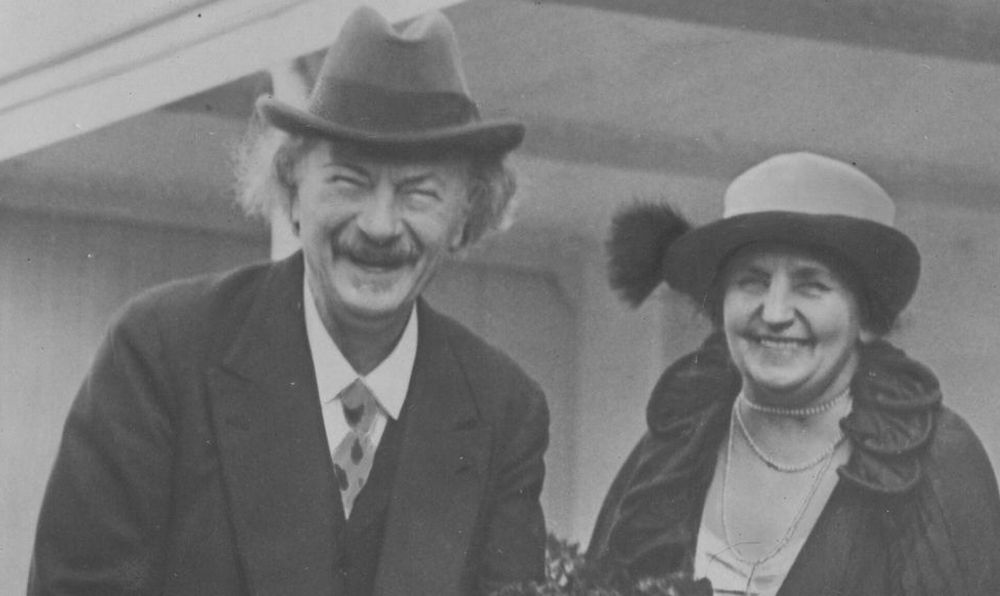 In 1891-1892 Paderewski conducted his first tour of the US, and it proved a stunning success. ‘Paddymania’ gripped the American public and he was soon dubbed the ‘king of the pianists’ and the ‘keyboard wizard’.

Along with fame, money soon followed, which he earned from touring. During a typical tour he would perform 60 times in 90 days, sometimes playing in excess of 100 concerts a year.

His second tour of the USA in 1892 earned him $3.2 million in today’s money from 88 concerts, not counting royalties from the sale of sheet music, whilst his third tour brought in $5.6 million. Over his career, he toured America dozens of times. 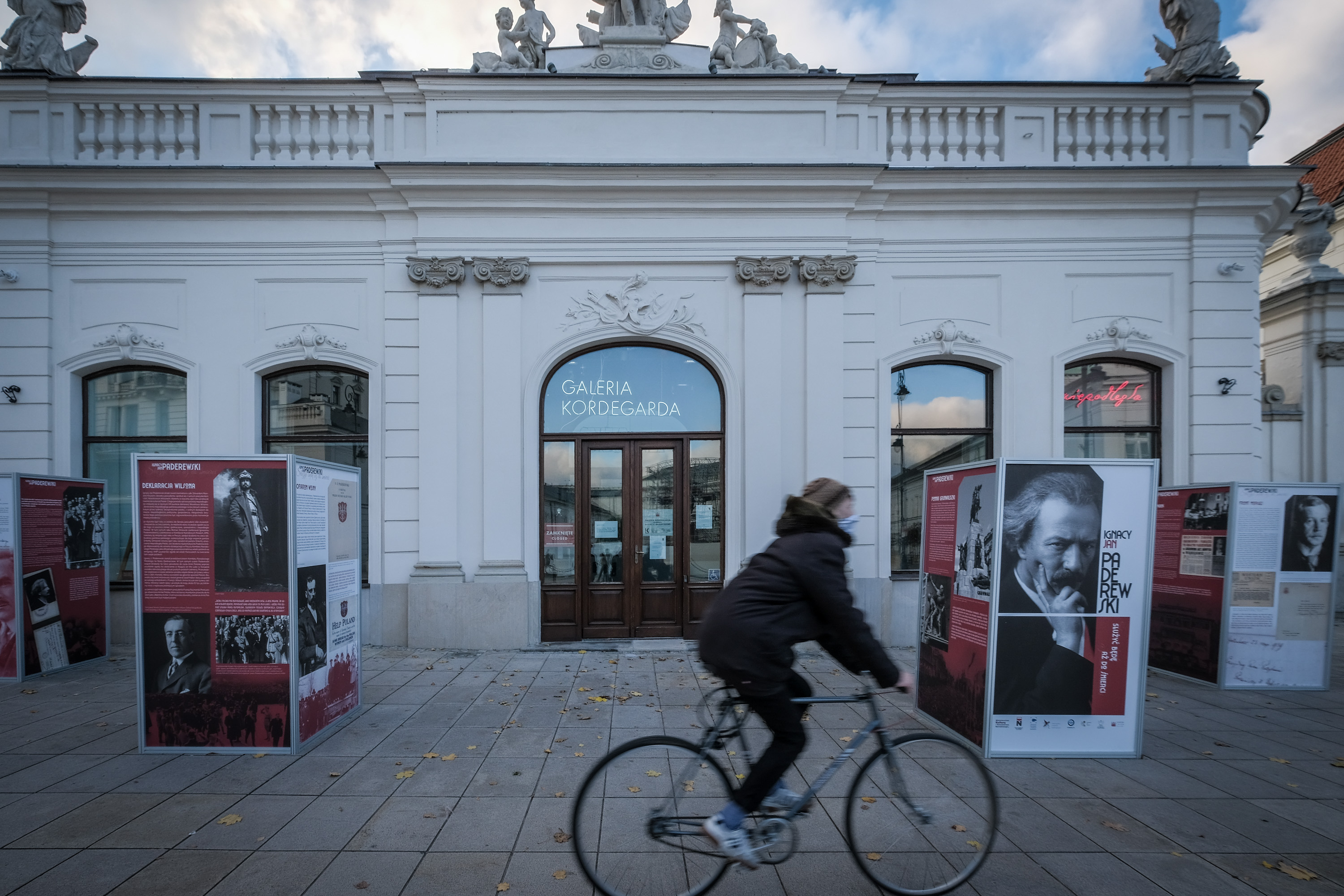 Originally planned to be staged indoors, the ongoing pandemic has forced the exhibition outside. Regardless, there remains plenty of information to soak up.Kalbar/TFN

By the turn of the century, Paderewski had accumulated an immense amount of money but chose to share his wealth generously with his countrymen as well as generously donating to numerous causes and charities across the world.

His main priority and lifelong mission, though, concerned Poland. “The thought of a great and strong, free and independent Poland was and is the content of my existence,” he exclaims from one panel. “Its realization was and is the only goal of my life”.

The exhibition at Krakowskie Przedmieście 15/17 in Warsaw can be visited up until the end of November.