The King Of Cool: How Poland fell in love with Katowice once again

If ever a train station defined a city, then Katowice was it.

Distressed and depressed, it felt representative of the town dying all around it. Seemingly entwined with the city’s fortunes, its subsequent redevelopment and revival at the start of this decade has coincided with a miraculous upturn in Katowice’s stock. If once this was the town Poles wanted to forget, today it’s become a creative hub and a poster child for urban regeneration. Even more so, it’s fast earning a reputation as a distinct hive of cool.

“Growing up there,” says Krzysiek Rzyman, a business journalist and author of the cult Coffee Spots Polska guide, “I just remember a grey and gloomy city – of course there were young people, but the scene didn’t seem to be growing like it was elsewhere in Poland.” 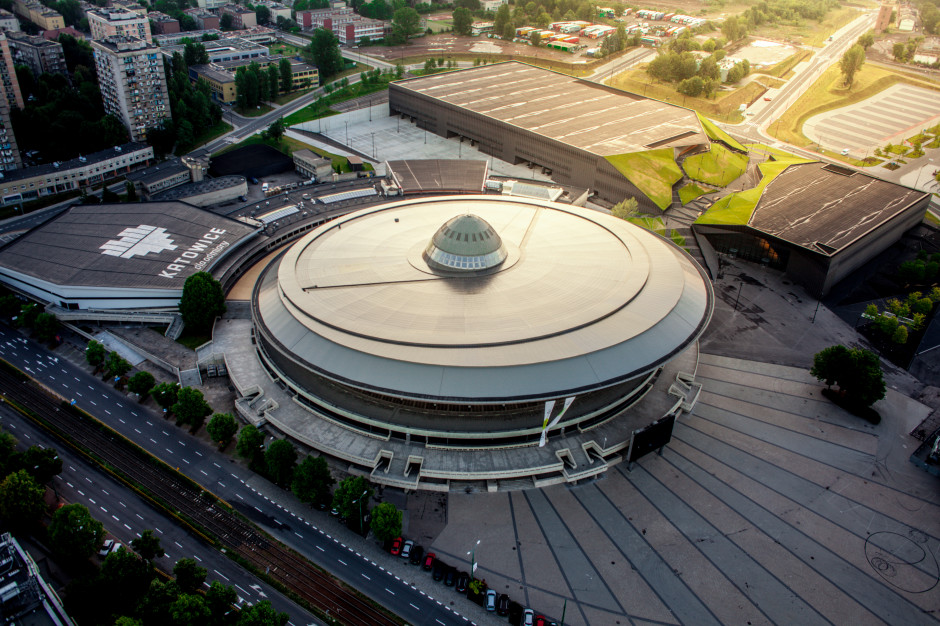 Benefiting from a thorough modernization in the past decade, the ‘flying saucer building’ Spodek has become iconic of the city.MCK Katowice

But look at it now. Harnessing its industrial heritage to maximum effect, the resurgence has been embodied by the success of the Culture Zone, a captivating area featuring a state-of-the-art conference centre, the sleek, hi-tech seat of the Polish National Radio Symphony Orchestra, the Silesian Museum and the Spodek concert and sports arena.

Linked up by sprawling public space and pristine greenery, this Culture Zone has come to embody the city’s soaring ambition. A place of future-forward thinking and bold initiative, similarities to a Google Campus end with the realization that not all is new. 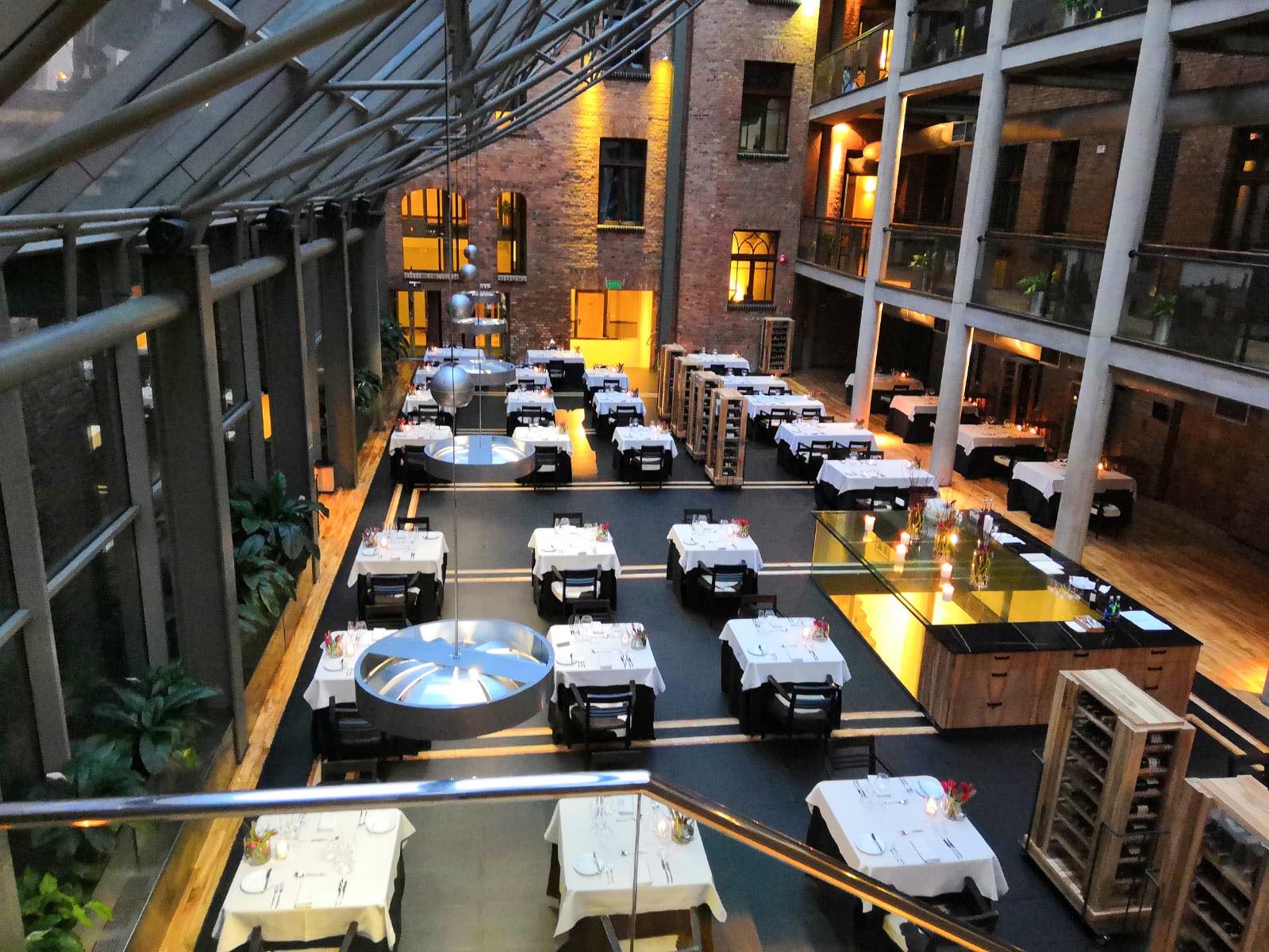 Sensitively modernized by the Likus Group at the beginning of the millennium, Hotel Monopol can boast a long line of notable guests including Paris Hilton and the England football squad. Hotel Monopol Katowice

Take the Spodek. Looking like it landed from outer space, this UFO-shaped object was originally completed in 1971 after passing safety tests involving 4,000 soldiers stamping their feet to ensure it wouldn’t collapse given its location atop of a former coal waste site. A triumph of post-war modernism, it’s here Fidel Castro spoke to a mesmerized crowd in 1972, his speech followed by a car show during which the Fiat 126p was unveiled to the public – over the course of the following week, it’s said over a quarter of a million Poles flocked to marvel at this feat of automotive engineering.

Benefiting from a thorough modernization in the past decade, the ‘flying saucer building’ has become iconic of the city, rivalled perhaps only by the towering, skeletal mine shaft tower that signposts the Silesian Museum. 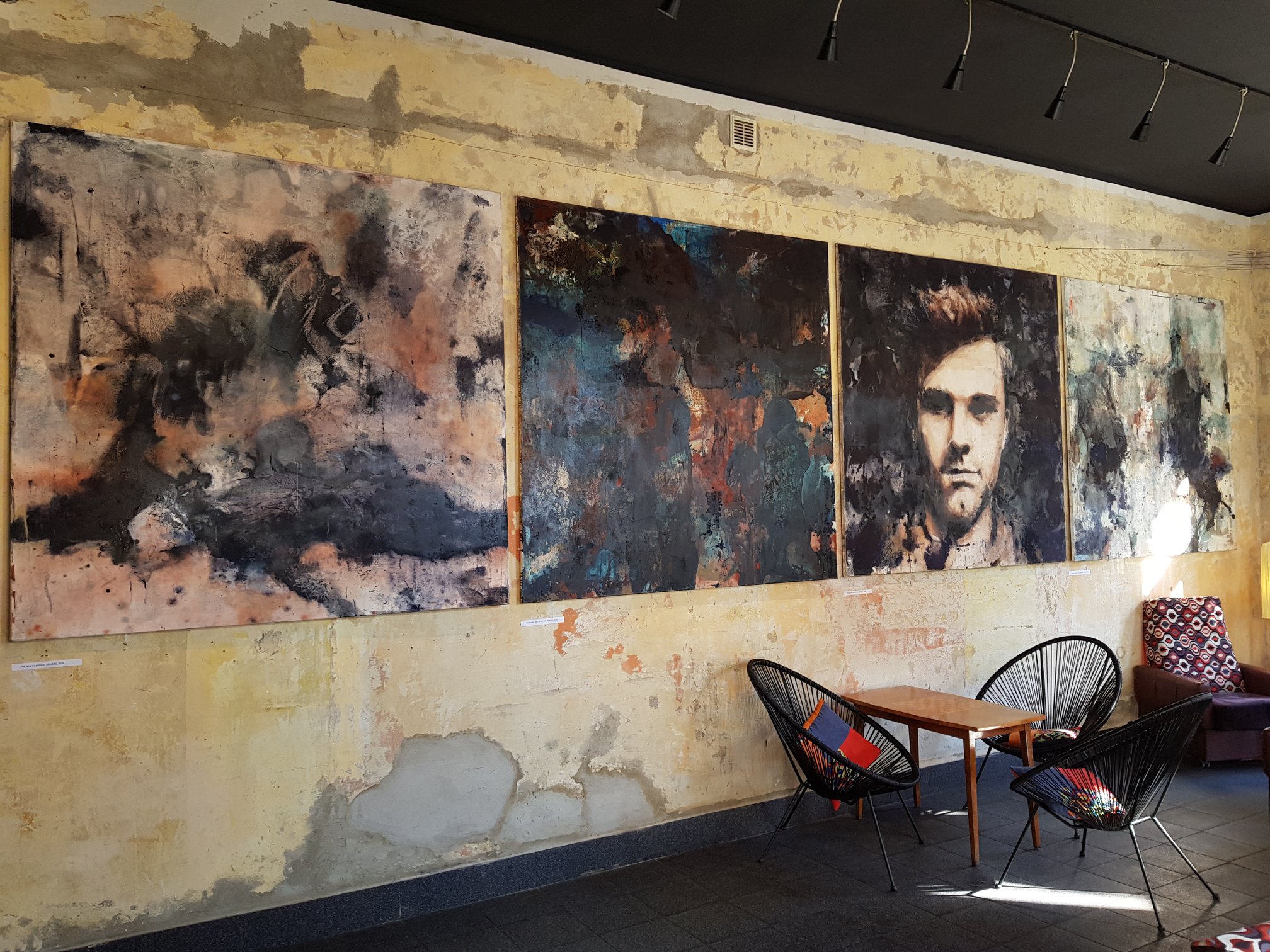 Key to the city’s renaissance has been a thriving social scene that some would claim is embedded in its DNA, and one that manifests itself particularly well in Absurdalna.Absurdalna/Facebook

Here, again, the past meets the now. Formerly the beating heart of the local coal industry, the plot once occupied by the ‘Katowice Mine’ has been reprised to contain arguably one of the most important museums in the country. Home to, among others, works by artists such as Mehoffer, Wyspiański and Matejko, not to mention separate exhibition spaces dedicated to the stars of Polish post-war poster art, the ace up the sleeve is The Light of History, a world class exploration of the region’s heritage and history: particularly strong in its representation of everyday life through the ages, it’s a collection that seamlessly blends multimedia advances with its rich assembly of wacky objects.

“Following the decline of heavy industry, Silesia – and Katowice – have had to look for new perspectives to reach their human and geographical potential,” says Bartek Molasy, manager of the cult Absurdalna bar in the city centre. “In the first half of the 20th century, this was one of the most dynamically developing cities in the world, and while that development was interrupted by both WWII and Communism, today Katowice is again faced with new opportunities.” 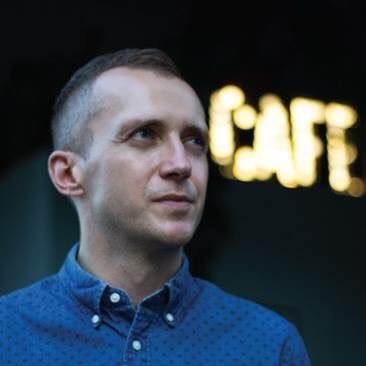 Business journalist and author of cult the cult Coffee Spots Polska guide says that apart from EU funding, Katowice’s success is down to the creativity of its people and the city’s strategy. Krzysiek Rzyman/Twitter

This is more than bar wisdom that is being dispensed. Key to the city’s renaissance has been a thriving social scene that some would claim is embedded in its DNA, and one that manifests itself particularly well in Absurdalna. Found round the corner from Mariacka, a pre-war street blazing with buzzing late night spots, Absurdalna proves to be more than just another bar riding the wave of Poland’s craft beer revolution: in many ways, it feels reflective of the very essence of Katowice. Combining radical art with 70s and 80s design pieces, it’s a place that feels thoughtfully in rhyme with the soul of the city.

“Katowice remains one of the most important academic centres in Poland,” continues Bartek, “and that’s why you’ll find so many talented young people living here – the city’s history is short, but it’s also very interesting.”

Back on the streets, the energy and atmosphere cracks like a whip in the crisp, evening air. Opposite Absurdalna, a supermodel in waiting scurries from a tinted cab into the Monopol, an elegant boutique hotel with a story dating from 1903. Here, a fresh-faced Captain De Gaulle bedded down, as did other inter-war heroes such as Eugeniusz Bodo and Jan Kiepura. Sensitively modernized by the Likus Group at the beginning of the millennium, more recent additions to the guest book number Paris Hilton and the England football squad. 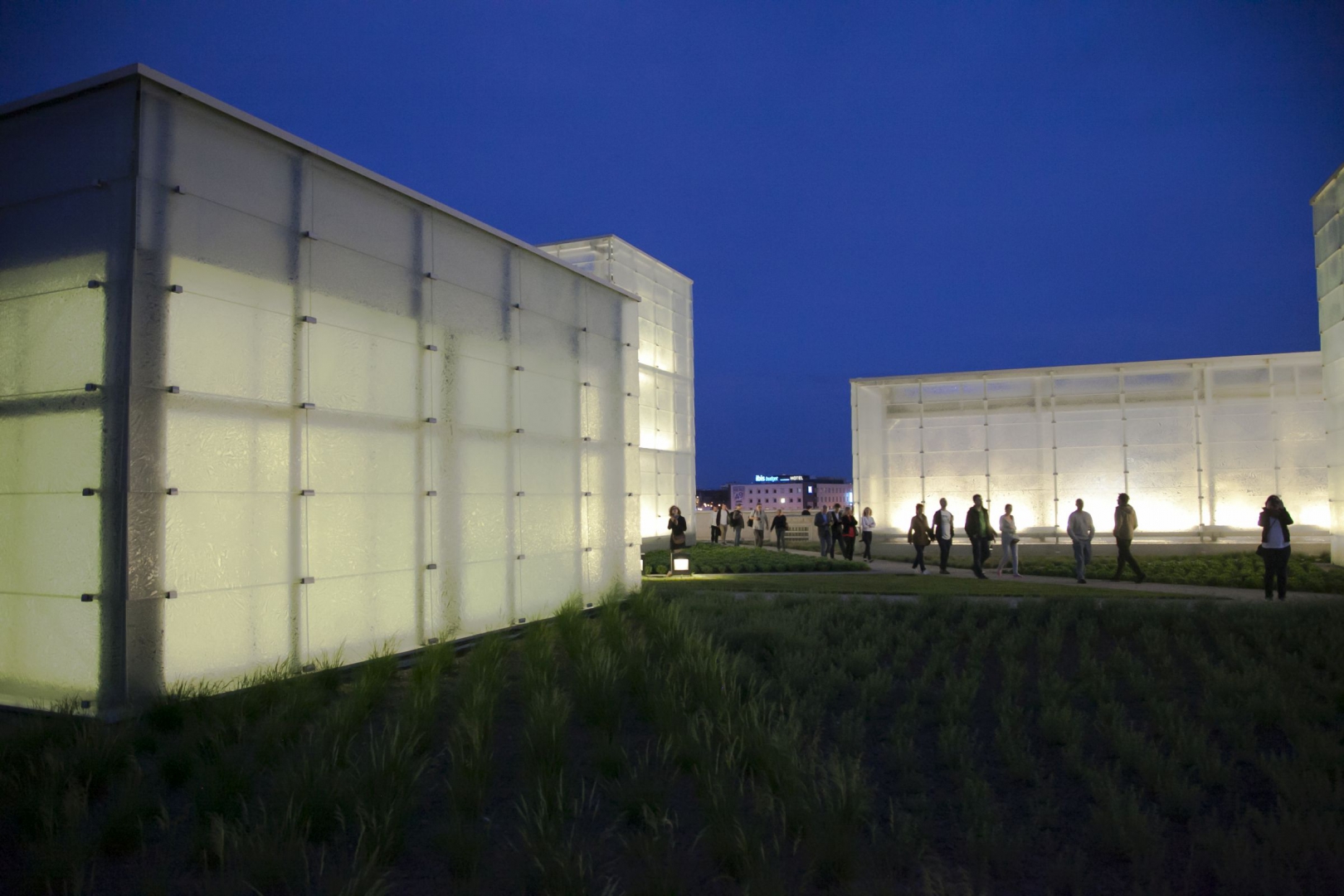 Harnessing its industrial heritage to maximum effect, the resurgence has been embodied by the success of the Culture Zone, the sleek, hi-tech seat of the Polish National Radio Symphony Orchestra and the Silesian Museum (pictured).Silesian Museum

Similar architectural nuggets from the fin de siècle period festoon the area, some shabby and worn, others restored to their flourishing best. But then, architecture is something that Katowice has always secretly excelled at. Forgetting stunning new treasures such as the University of Silesia’s Department of Radio and Television – shortlisted for the prestigious Mies van der Rohe Award earlier in the year – the city once found itself given the unlikely nickname of ‘the Polish Chicago’.

Accounting for this were a range of modernist inter-war buildings such as the Drapacz Chmur (Cloud Scraper), a 60-meter construction that pioneered the use of rubbish chutes in this nation. Completed in 1934, it’s one of 17 landmarks now included in the city’s Szlak Moderna architecture trail (moderna.katowice.eu).

Harking to a different period, but nonetheless courting similar attention, is the area of Nikiszowiec, a self-contained workers estate originating before WWI. A favorite of photographers both amateur and professional, this grid of brick buildings trimmed with bright red ledges, has also emerged from Stygian darkness to become a curiously cool district offering a snapshot of the past. Previously perceived as a place of brooding menace, the area’s newfound cultural clout is another victory recorded by the city. 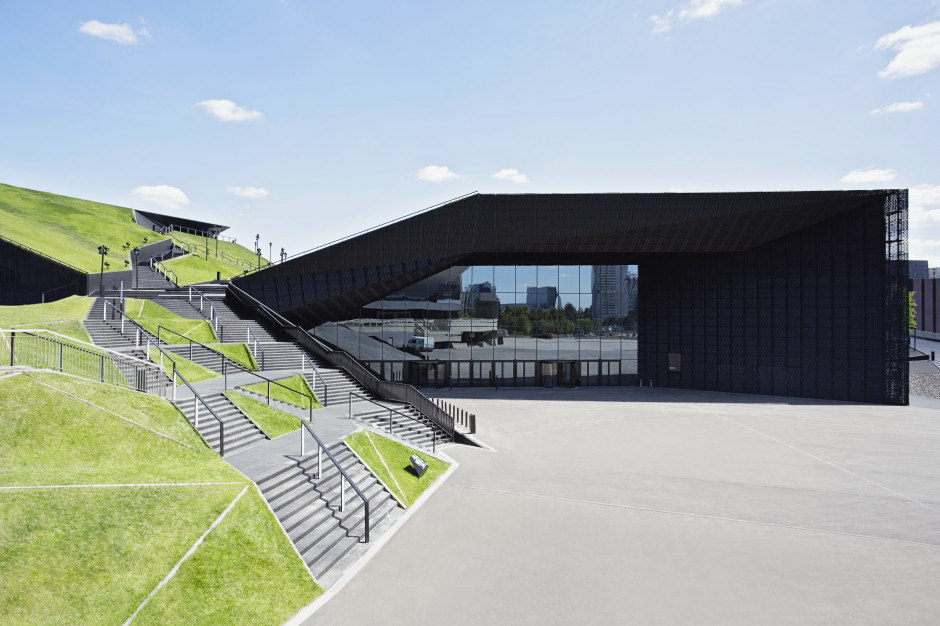 Speaking to Krzysiek Rzyman, he is adamant that during his nationwide research for Coffee Spots Polska it was his hometown that surprised him the most. “I rediscovered the city,” he says, “and in the process learned to become tremendously proud of it again.” So where did it all go right?

“It’s been a combination of factors,” answers Krzysiek. “The people, of course, they’ve always been creative, but you’ve also got to credit the strategy of the city and the way they’ve made changes to the urban landscape whilst also respecting the past. They’ve positively promoted the industrial heritage, and you’ve also had masses of cultural events and music festivals introduced. Finally, there’s the EU impact and the fact that EU funding has been sensibly spent. Katowice has transformed and now people know it.”

Vibrant, intriguing and hopelessly addictive, what was Poland’s ugly duckling has bloomed anew. Slandered no more, this is the city that became young again.