On this day seventy-one years ago Kazimierz Moczarski, a lawyer and former Home Army officer, rose to begin his first full day of incarceration inside Mokotów prison.

Sharing a cell with Jurgen Stroop, the psychopathic Nazi responsible for quashing the Warsaw Ghetto Uprising, the experience would later compel him to pen the ground-breaking book Conversations With An Executioner.

Born in Warsaw in 1907, Moczarski graduated from the university’s Faculty of Law in 1932. Academically gifted, he chose to prolong his studies by first attending the capital’s College of Journalism, and then by enrolling at the Institution of Higher International Studies at the Sorbonne in Paris. 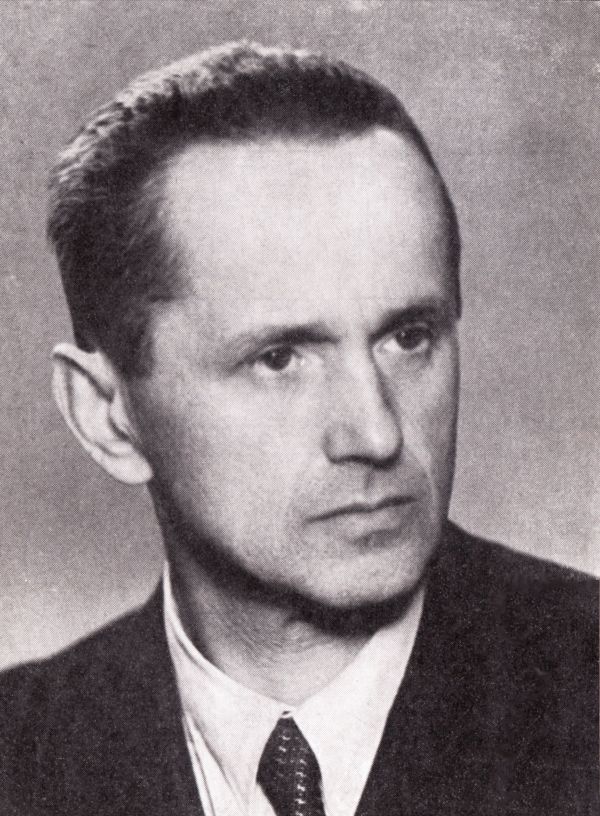 The outbreak of war saw Moczarski join the Polish Home Army where he was instrumental in uncovering informants and traitors and personally oversaw approximately sixty investigations.Public domain

Returning to Poland in 1935 he was recruited to the Ministry of Labour & Social Services where he specialized in advising on matters of Polish and international law. Politically active, a series of meetings held at his apartment on Hoża 42 would lead to the birth of the city’s Democratic Club.

The outbreak of war turned life on its head and like thousands of other Varsovians Moczarski found himself joining the defence of the city.

The years of occupation that followed failed to dim his patriotism and Moczarski enlisted in various underground organizations, among them the Information & Propaganda Bureau, the Underground Fight Management of the Capital City of Warsaw and the Department of Personal Diversion.

Working for the latter, he was instrumental in uncovering informants and traitors and personally oversaw approximately sixty investigations. 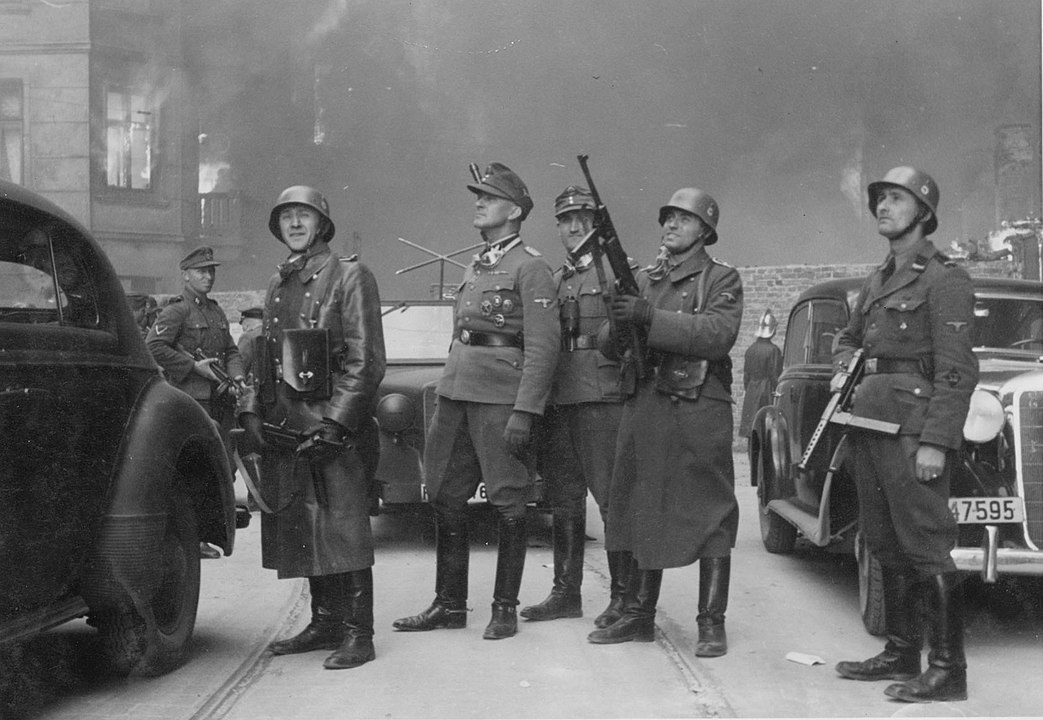 Promoted to head the AK’s Central Army’s radiotelegraph service in the summer of 1944, the Warsaw Uprising saw him take control of, firstly, the “Rafał” transceiver station in Śródmieście Północ and then, in September, the “Danuta” station on Widok 16.

Simultaneously, his journalistic skills were also harnessed and he was installed, on a temporary basis, as the editor-in-chief of a daily bulletin by the name of Wiadomości Powstańcze.

Heroism came naturally to Moczarski and although he had successfully escaped the burning city with a Red Cross convoy just after the capitulation of the Uprising, he returned to the capital to aid the daring breakout of Jan Stanisław Jankowski, a stranded representative of Poland’s Government-in-exile. As it transpired, these wartime adventures would prepare him well for the challenges ahead. 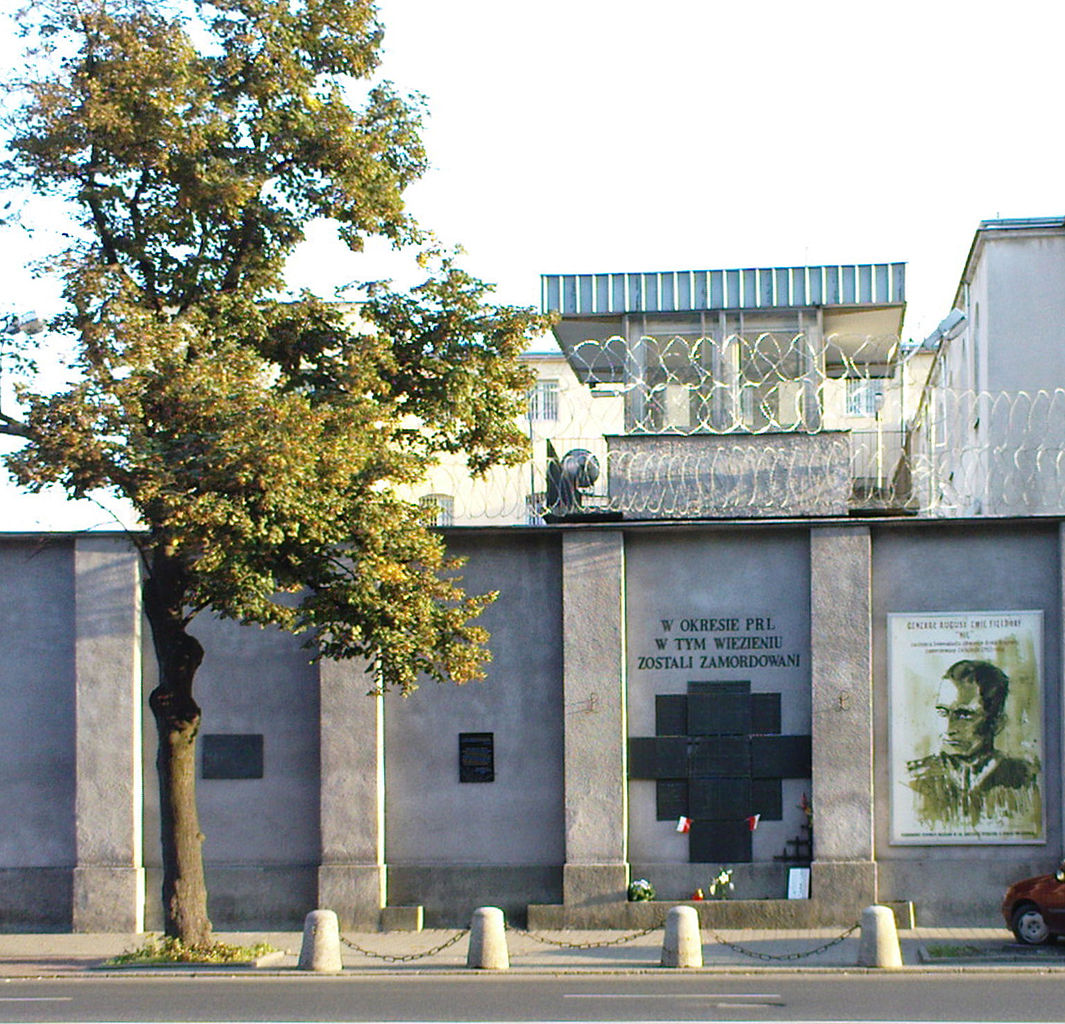 After the war, both Moczarski and Stroop were arrested and held in the same cell at Mokotow prison in Warsaw. Today a plaque outside the prison commemorates the many Polish victims.Jolanta Dyr/ Creative commons attribution-share alike licence

Arrested by the communist authorities on August 18th, 1945, he was sentenced the following year by the District Military Court to ten-years in jail for his perceived resistance to the system.

Brutal interrogations became the norm, and his prison memoirs later detailed the forty-nine different types of torture that he endured including savage beatings, having his eyelids burned with cigarettes, sleep deprivation and being kept standing in a cramped cell for up to nine-days.

Incredibly, the most ignominious punishment was yet to come.

On March 2nd, 1949, he was reassigned to the prison’s Cell No. 10 where he found himself faced with two other inmates. 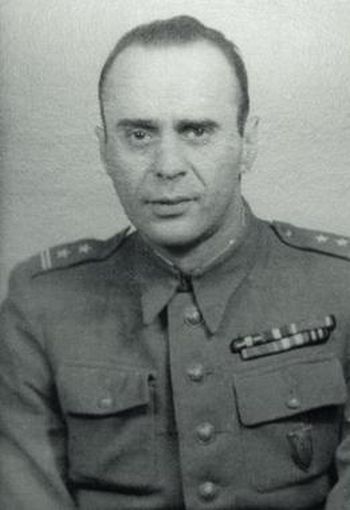 During his incarceration, Moczarski suffered brutal torture and interrogations at the hands of Józef Różański.Fair use

“The door had barely locked when we began sniffing each other out like prisoners do,” he later recalled. “These two temporarily held the advantage in terms of prison relations in that I had been accommodated to them.”

To his horror, he quickly learned that his cellmates were an SS-Untersturmführer, Gustav Schielke, and Jurgen Stroop, an SS Gruppenführer who had masterminded the bloody suppression of the Warsaw Ghetto Uprising in 1943.

“My initial shock at finding myself among Nazis quickly transformed itself into the resolve to use this proximity to get to know my cellmates as best as I could,” he wrote.

“By analysing their personalities and extracting their life stories, I felt I might gain some degree of insight into the historical, psychological, and sociological mechanism that had led certain Germans to become genocidal killers who ruled the Reich and attempted to impose their order through Europe and beyond.” 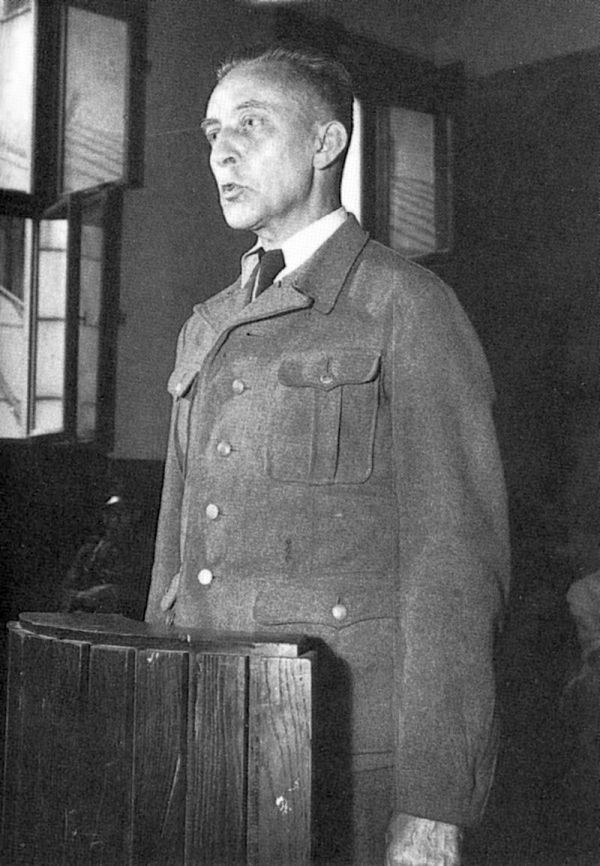 Stroop was finally tried and executed within the wall of the prison on March 6th but not before telling Moczarski all the horrific details of his unrepentant life in the SS.Public domain

Initially treated with suspicion, once Stroop came to the realization that Moczarski hadn’t been planted as a prison spy he began opening up – to the extent that the Pole was even permitted to read Stroop’s private correspondence.

What he discovered was as banal as it was disturbing.

Spending a total of 255-days together, he found a middle-class man of only rudimentary education: Polish lessons that Moczarski gave Stroop fell on deaf ears to be forgotten the next day, and the German even confessed to being unaware as to the existence of Antarctica. 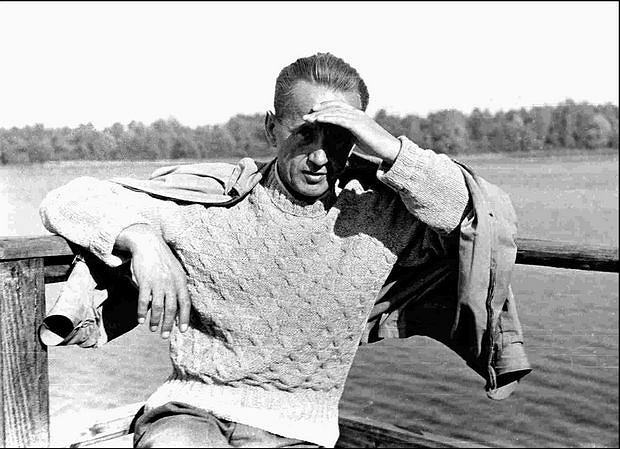 All charges against Moczarski were eventually dropped in 1956 and after being released he began work as a journalist for Kurier Polski.Public domain

Changing his name from Josef to Jurgen in 1941 so as to sound more Aryan, Stroop often dwelled on his love of horses and Wagner whilst also speaking unrepentantly of his admiration for Hitler and his racial policies.

Describing the liquidation of the Jewish Ghetto as his greatest achievement in life, he spoke graphically about its ultimate destruction even revealing to Moczarski how he had secretly crossed himself (“Like mother had taught me”) before each day of his Ghetto campaign.

Virtues of Christian mercy, however, were qualities lacking in Stroop.

“There was a Nordic soldier with blue eyes,” he told Moczarski. “He was an anti-Semite but he was crying. He muttered something about how he couldn’t do this… the blood… the corpses… the children… I totally lost my head and gave him a punch to the nose then threw him out of the Ghetto along with a hundred-and-fifty or so of his cowardly pals.” 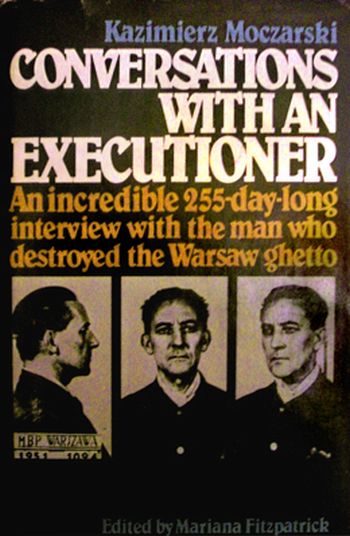 His book Conversations With An Executioner (Rozmowy z katem) wasn’t published till 1977, two years after his death. It was subsequently released in its uncensored version and has since been translated into all major languages and turned into a film and stage play.Fair use

Out of respect for each other, the three prisoners eschewed using the fold-out bed attached to the wall to instead sleep on mattresses on the floor, and though the Germans enjoyed privileges unknown to Moczarski (such as outdoor exercise, double food portions and parcels from their families), in this bizarre captivity an atmosphere of cordiality came to exist.

While Schielke (with whom Moczarski formed something of a bond) sang sentimental songs, Stroop would continue his reminisces; for instance, how during better times he had gifted his young son, Olaf, an SS uniform with chamois boots. Bearing a loaded Italian rifle, the eight-year-old would supervise the prisoners working on the grounds of Stroop’s Wiesbasden home.

With Stroop’s execution looming, the confessionary aspect to his recollections became very much apparent, but at no point did he express a shard of regret for his actions. On the contrary, he unashamedly proclaimed that he had once harboured hope that the Ghetto area would be turned into a German district with a street named in his honour.

Finally, the trio were separated on November 11th, 1949 with Stroop finally executed within the wall of the prison on March 6th, 1952. To the end, he displayed no remorse. 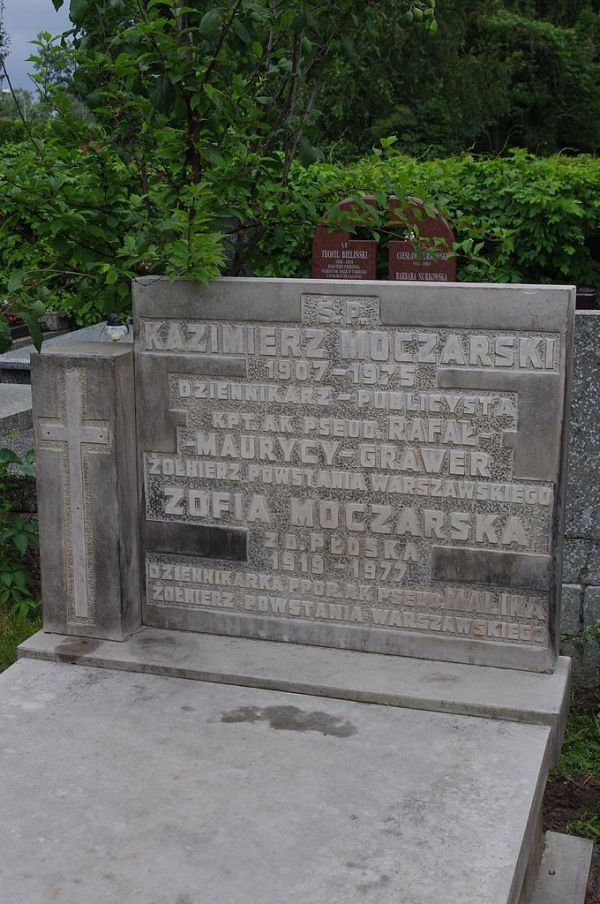 Moczarski was himself sentenced to death in 1952, and whilst this was commuted to life imprisonment the following year he was never told of this decision. This, along with his numerous other harrowing experiences, put him in an agitated high state of stress that he later credited with giving him the focus to memorise all of his interactions with Stroop.

These memories, like Moczarski, would eventually see the light of the day. Following Stalin’s death and the thaw that followed he was exonerated of all charges in 1956 and freed.

Finding work as a journalist for Kurier Polski, as well as becoming an active campaigner in an anti-alcohol movement, he began writing his memoirs in 1971. Though published in instalments by a magazine named Odra in 1972, a redacted version of the book, Conversations With An Executioner (Rozmowy z katem) wasn’t published till 1977, two years after his death.

Buried in Powązki Military Cemetery, his seminal work was subsequently released in its uncensored version in 1992 and has since been translated into all major languages and turned into a film and stage play.