The Great(est) Escape: Wisła Kraków’s comeback from the “almost” dead

As a story, it had it all: gangsters and heavies, missing millions, a bungling con artist and a happy ending featuring a rugged hero. But this wasn’t a plot from the latest Guy Ritchie film, rather some of the recently reported capers at Wisła Kraków.

Regarded as one of the country’s most hallowed sporting institutions, the scandal that engulfed the club caused mirth and consternation in equal measure. Now, against the odds, the grand, old lady of Polish football is back from the brink after coming within a whisker of outright extinction.

Having claimed seven league titles this century alone, Wisła’s spectacular implosion occurred after mobsters associated with the side’s hooligan group – the Sharks – infiltrated the very core of the club. Allegedly using Wisła as a front for their illegal dealings whilst simultaneously draining millions from the side’s coffers, matters came to light last year following an expose by investigative journalist Szymon Jadczak.

Further implicated by the apprehended members of an affiliated gang – one connected to Ruch Chorzów football club – a wave of arrests followed, including that of ‘Misiek’. First coming to prominence in the late 90s after throwing a knife at the head of Dino Baggio during a UEFA Cup tie, it was revealed that Misiek – widely understood to be the leader of the Sharks – had once been represented in court by Marzena Sarapata, a glamorous lawyer who would later become the president of Wisła Kraków. Incredibly, in hindsight at least, Sarapata was voted as Małopolska’s 2017 Personality of the Year; it was under her watch that the club fell apart. 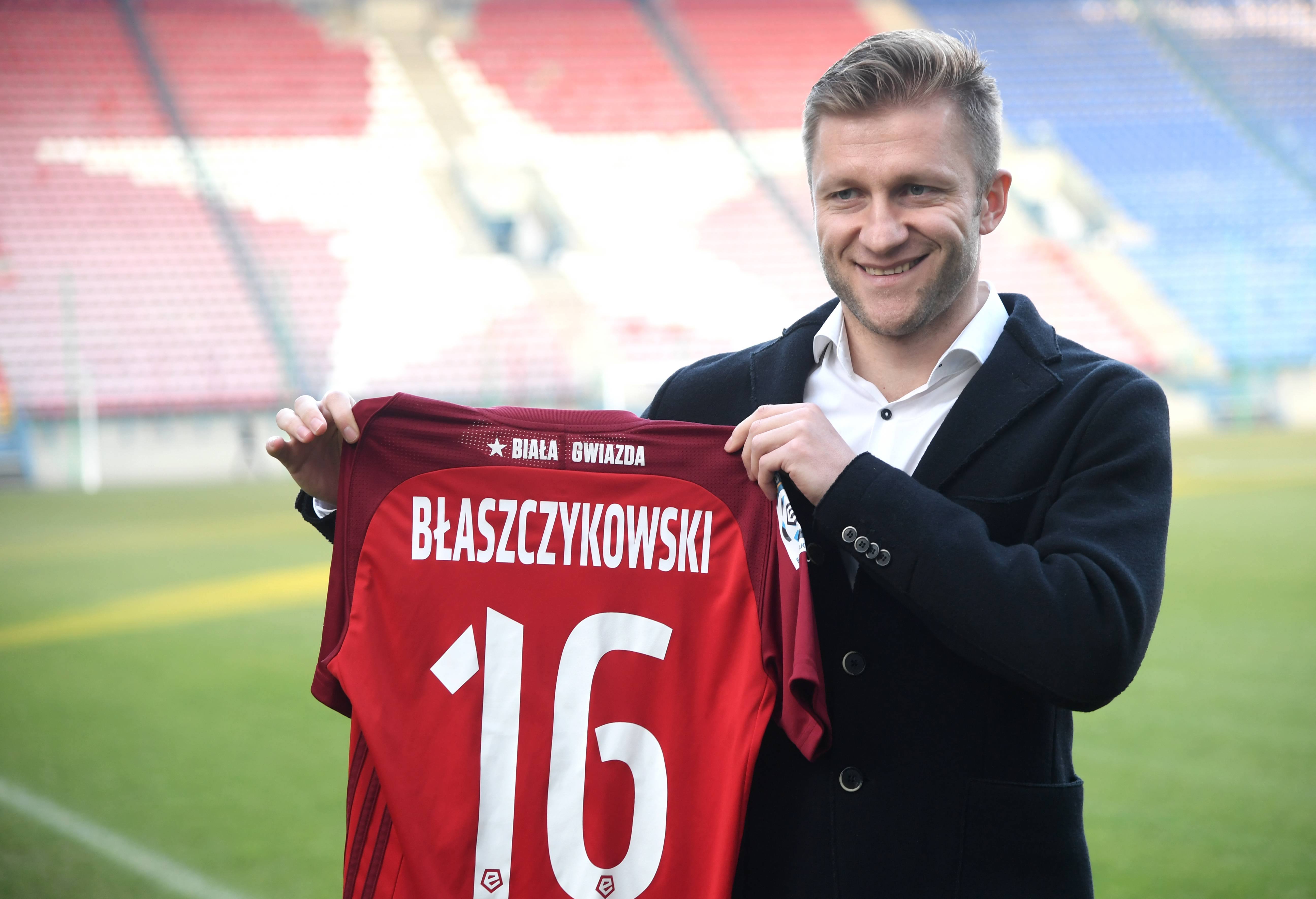 Saviour. Jakub Błaszczykowski, the former captain of Poland’s national side, agreed to return to his old club for PLN 500 a month, after loaning it PLN 1.3 million.Jacek Bednarczyk/PAP

Of the revelations that followed it was disclosed that, for a greatly reduced fee, Wisła had allowed Misiek to rent the White Star Power gym, a vast facility in which money was reputedly laundered and Sharks recruited; a sports hall, also on the site of the club’s ground, had been used to horde stolen property; merchandise featuring far-right insignia had been peddled prior to matches; and a purported murderer and other nefarious individuals had been employed to work at the club’s ticket office. In one instance, the club’s players wore t-shirts urging the speedy convalescence of ‘Dudek’, a Chorzów gangster injured in a shootout – the club had told them he had been involved in an accident.

But with key members of the Sharks hierarchy behind bars, Wisła’s house of cards came tumbling. “The money dried up,” says Dr. Christopher Lash, a Warsaw-based professor and well-known authority on Polish football. “Players ceased being paid and by December of last year the situation had dissolved into a full-on crisis.”

Crisis also meant cabaret. With debts of around PLN 40 million declared – much of it believed to have been siphoned off by the Sharks – and the club teetering on the edge of a financial precipice, a bizarre consortium appeared featuring Vanna Ly, a self-proclaimed member of the Cambodian royal family. Ly, who also asserted he was a millionaire businessman, promised to cover urgent debts to keep Wisła from folding. “It was pure comedy,” says Lash, an Englishman whose Right Bank Warsaw blog is regarded as the No. 1 English-language window into the strange world of Polish football. “They arrived in Kraków on a budget flight and with Ly’s spokesperson making all kinds of strange announcements – for instance, that Ly had personally known Pope John Paul II and held the rights to Mehmet Ali Ağca’s biography (editorial note: the Pope’s would be assassin).”

This was the tip of the iceberg. With the consortium pledging to pump PLN 130 million into the club to turn it into a brand capable of competing with Real Madrid and Barcelona, journalists began looking deeper into the backgrounds of these saviours. Ly, it transpired, was unknown to the Cambodian royals, and his company’s address a shabby tenement shared with a bar and hairdresser. 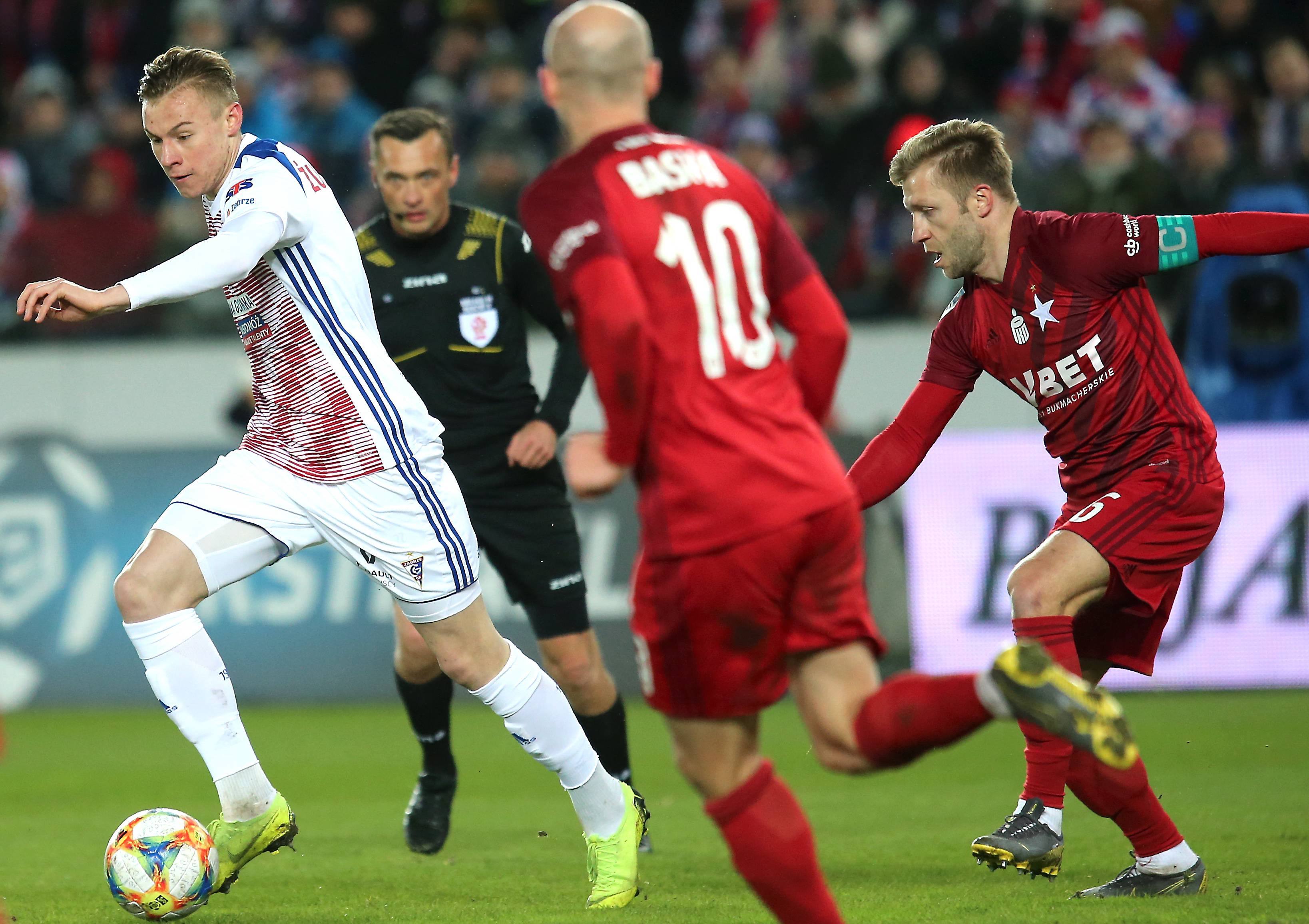 Still, the sale process was allowed to proceed for a symbolic sum of PLN 1 with the consortium choosing to celebrate their negotiations in an aging Kraków restaurant; when it came to pay, the group’s bank card was rejected.

More farce and fiasco was to come. With a deadline approaching for a PLN 12.2 million down payment, the benefactors went to ground offering a string of excuses. “First, it was claimed that Mr. Ly was on his way to a bank in Luxembourg to make a transfer only to lose the phone containing his bank details,” says Lash. “Then, his camp announced that Ly had suffered a heart attack while on a private jet to New York.” Mats Hartling, the Swedish connection in the consortium, joined the circus by insisting he had been double-crossed and denouncing his business partner to be “a little asshole.”

“As it turns out,” continues Lash, “they hadn’t even paid the initial sum of one złoty.”

As entertaining as this debacle was, speculation quickly mounted that it had been purposefully engineered by Wisła’s outgoing board to allow time to cover their tracks and get rid of any incriminating evidence. If that had been the idea, then it seemed to work. Opting at the start of January to suspend the club from competing in Poland’s top flight, the Polish FA admitted that they were none the wiser as to what was going on. “Frankly speaking,” ceded Krzystof A. Rozen of the licensing committee, “all the information we have has come from the media… we don’t know who is currently in charge at Wisła.” With practically all of the players demanding the annulment of their contracts, the 13-times Polish champions had reached a nadir. Things could only get better. 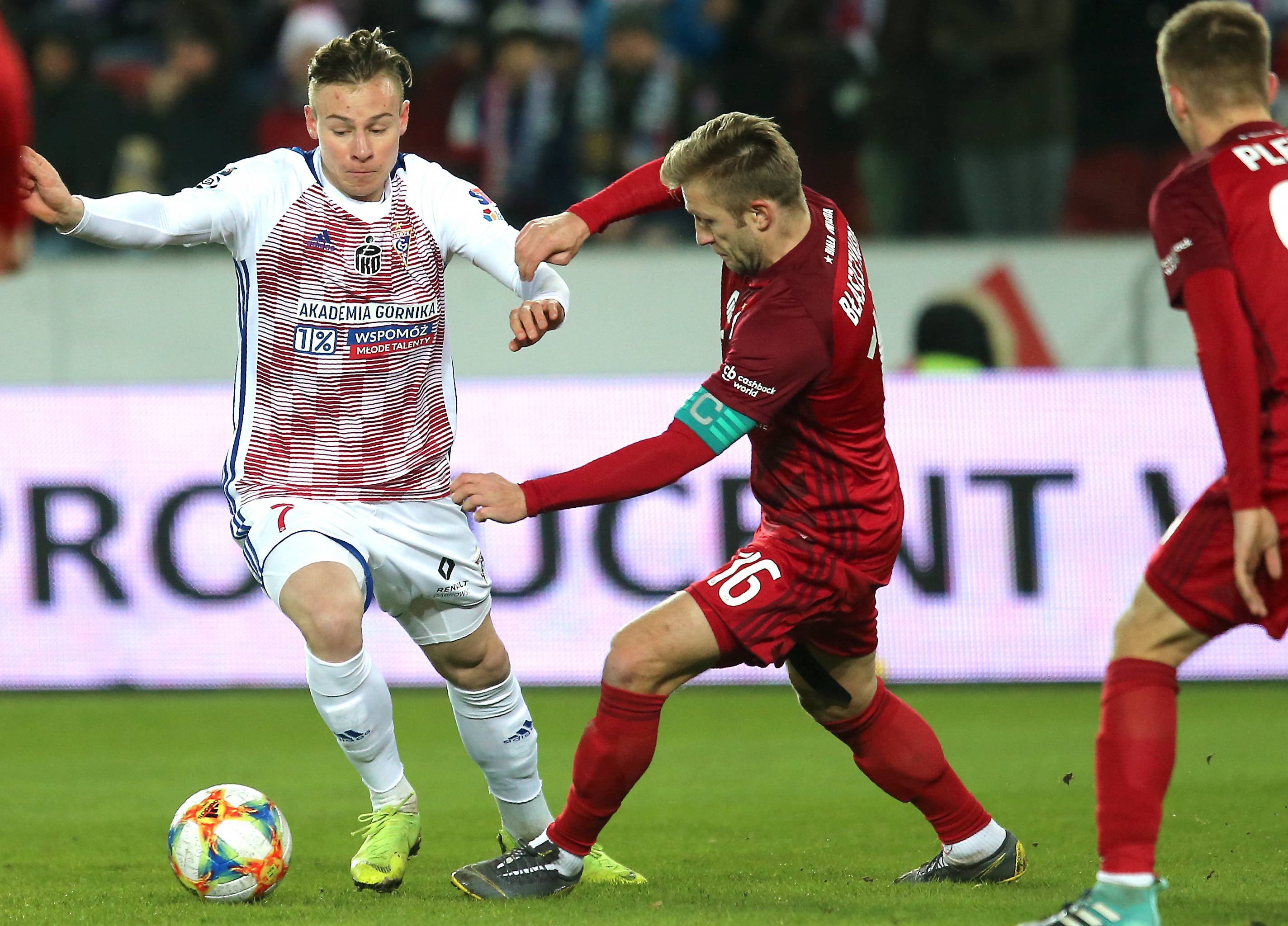 Wisła, in red, is one of the most successful clubs in Polish football history, and have already won seven league titles this century.Andrzej Grygiel/PAP

And get better they did. Working pro bono, Legia Warszawa’s former president, Bogusław Leśnodorski, stepped in to untangle the legal calamity, whilst emergency financial aid was provided by a clutch of business figures led by Jarosław Królewski. Also helping stabilize the mess was Rafał Wisłocki, practically the only board member from the previous regime to escape with any credit.

The global headlines, though, were saved for Jakub Błaszczykowski, the former captain of Poland’s national side. Returning voluntarily on a free transfer to the club that kick-started his career, the 33-year-old record cap holder immediately loaned Wisła PLN 1.3 million (on top of the PLN 1 million he had already given over summer), before declaring he would play for free. With the Polish FA stipulating that professionals must be paid a minimum of PLN 500 per month, Błaszczykowski announced his salary would go towards buying match tickets for orphaned children. “The moment I heard Wisła were in trouble,” said Błaszczykowski at the time, “I knew I had to come back.”

“You’re talking about a massive star here; aside from Robert Lewandowski there are no current Polish players that are more recognizable,” says Lash. “At his age, he could easily have cashed in and seen out his career in the Middle East or somewhere similar, so for him to come to Kraków is momentous – every game he plays is an advert for the club. But beyond the footballing aspect, his actions say so much for the values he represents.”

Supporters, too, have rallied. A share issue conducted via the Beesfund crowdfunding platform was launched in February, and the target figure of PLN 4 million reached within 24-hours. In that time, 9,129 fans snapped up shares with buyers giving addresses from all over Poland – notably, none were from Chorzów. 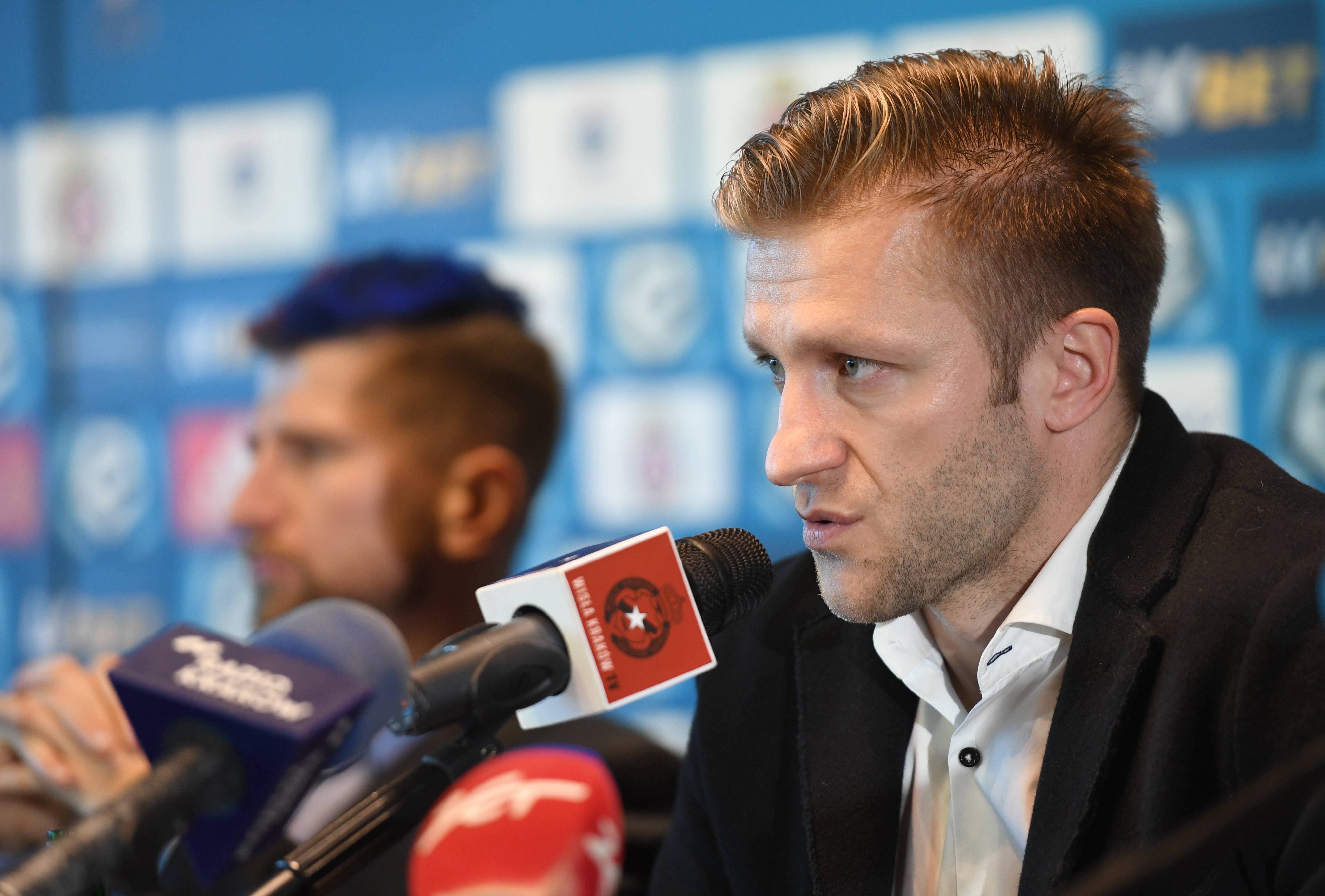 Aged 33 Błaszczykowski could have ended his career on a lucrative salary in the Middle East but chose instead to help his old club by playing for a pittance.Jacek Bednarczyk/PAP

Recharged and galvanized by this turn of events, the club now finds itself riding the crest of a wave. Handed a second chance by the Polish FA, a bumper crowd looks certain for their first home fixture since the winter break. As it stands, ticket sales suggest that Poland’s record attendance for a Monday night match will be smashed and a raucous reception for the team is assured.

“The whole story started very badly for Wisła, and there are still many issues that need to be resolved” says Lash, “however, from the darkness there’s now light. What was a tragicomic tale now has very positive elements, from Błaszczykowski’s conduct to the manner in which the true fans have responded.”

Asked whether the saga will negatively impact the reputation of Polish football, Lash is adamant in his stance. “I think some Poles have this mea culpa attitude where they throw their hands in the air and cry that they’re the worst,” he says. “But look at the rest of Europe. This isn’t just a Polish problem, there’s a number of countries, for example Italy, where fan groups with their own interests at heart carry way too much influence. The big difference in Wisła’s case was that these groups were walking the corridors of power.”

How this helter-skelter drama will ultimately play out remains open to debate, but for the time being, few football fans can begrudge Wisła Kraków their remarkable revival. As footballing comebacks go, it’ll certainly be remembered.

Poland a potential host for next season's neutral matches - UEFA