The Fab Four getaways to look forward to in 2021

Consigned to our coops for at least another few weeks, yesterday’s new wave of restrictions came as a bitter blow to all those harbouring hopes of great escapes and weekend breaks – and let’s face it, couldn’t we all do with one of those at this point in time.

But just because we can’t travel, that does not mean we shouldn’t think about it – or, for that matter, plan it. On the contrary. Coinciding with the launch of PKP’s 2021 timetable, TFN takes a whistle stop look at the four big cities that will comprise the foundations of their offer in the year ahead.

Connected directly to Berlin, Gdynia has stepped out of the immediate shadow of neighbouring Sopot and Gdańsk to become a star in its own right. 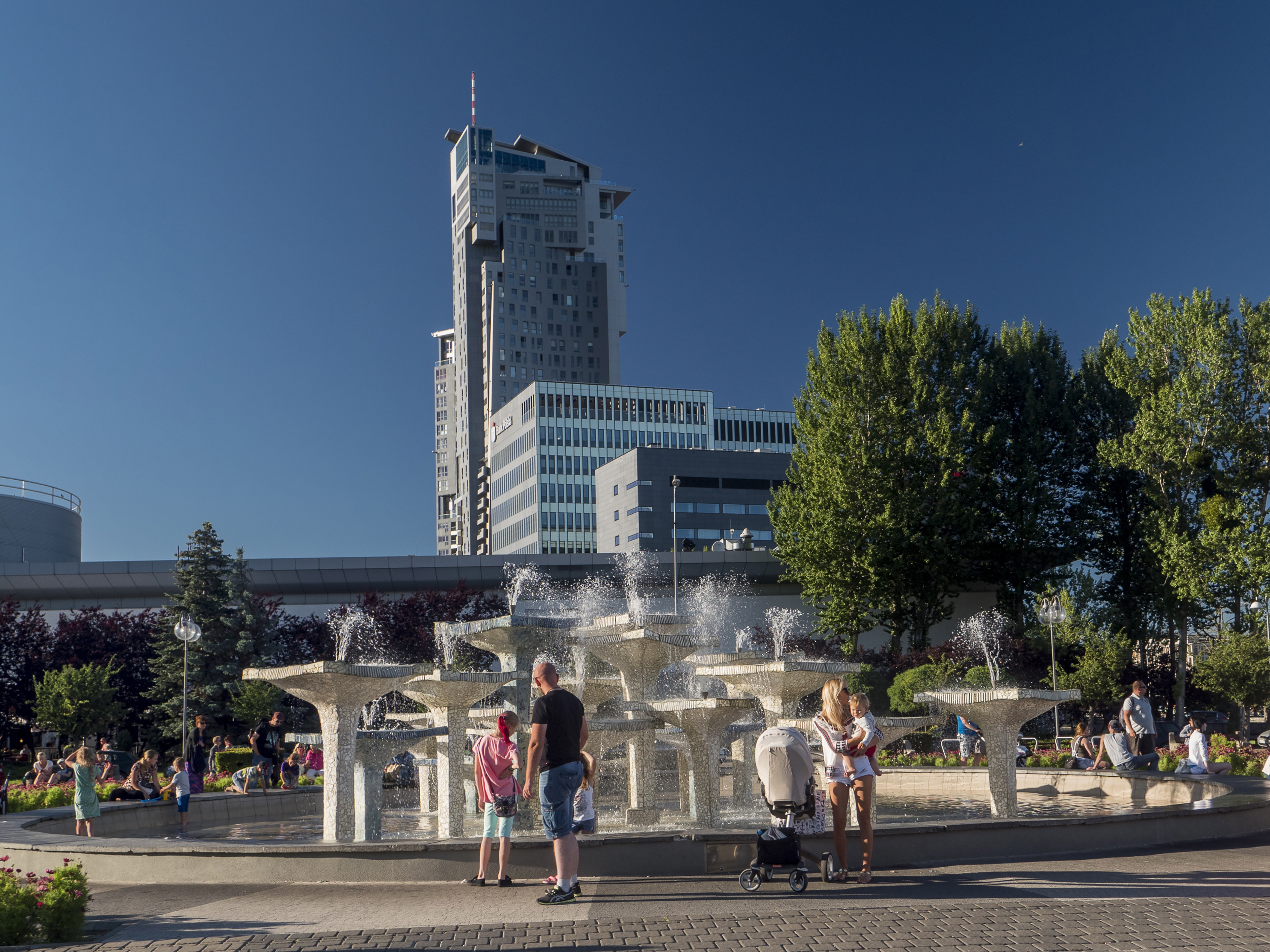 Gdynia is seen as one of the world’s finest large scale examples of inter-war modernism.Jerzy Ochoński/PAP

Christened in 1919, the town was intended to serve as “Poland’s gate unto the world”, a modern seaport that would represent the dreams and aspirations of the newly independent Polish state.

As such, today it is seen as one of the world’s finest large scale examples of inter-war modernism and this architectural legacy is served by its bounty of cubist buildings, many of which have been revived to their former glory with a fresh lick of paint and restored neon signage. 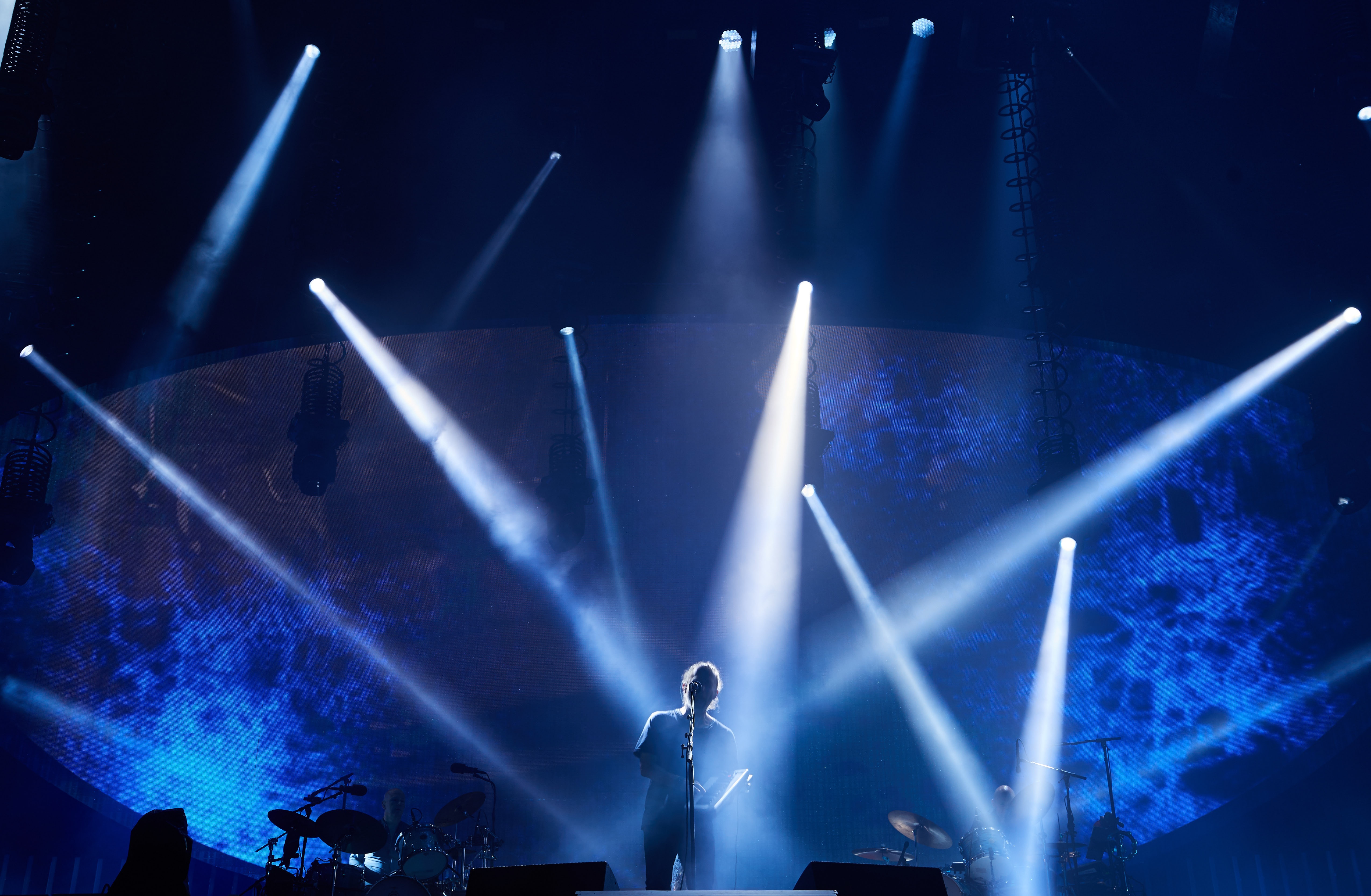 Attracting huge names such as Radiohead, the annual Open’er is one of Poland’s edgiest music festivals. Adam Warżawa/PAP

Revelling in a deserved reputation as a dynamic urban centre, its profile has grown as much thanks to its cultural side; in the form of the annual Open’er, it has Poland’s edgiest music festival, and this is matched by a year-round offer of tech-forward cultural institutions such as the Science Centre, the Museum of Emigration and the Gdynia Aquarium.

Recognized for its affluence, the town’s hilly forests and steep, seaside cliffs come dotted with remnants of WWII bunkers and wooden piers jutting from quiet beaches. And in the form of the Quadrille, a palace reprised as a luxury hotel with a surreal Alice in Wonderland motif, it has one of Poland’s most curious hotels.

Not long ago, summarizing Warsaw was one of the most basic duties a travel scribe could undertake: of the cliches, “the Phoenix city” would be used with liberal abandon, followed by words hailing its post-war rise from rubble and its subsequent reinvention as a Socialist city of wide concrete boulevards and outsized dimensions. 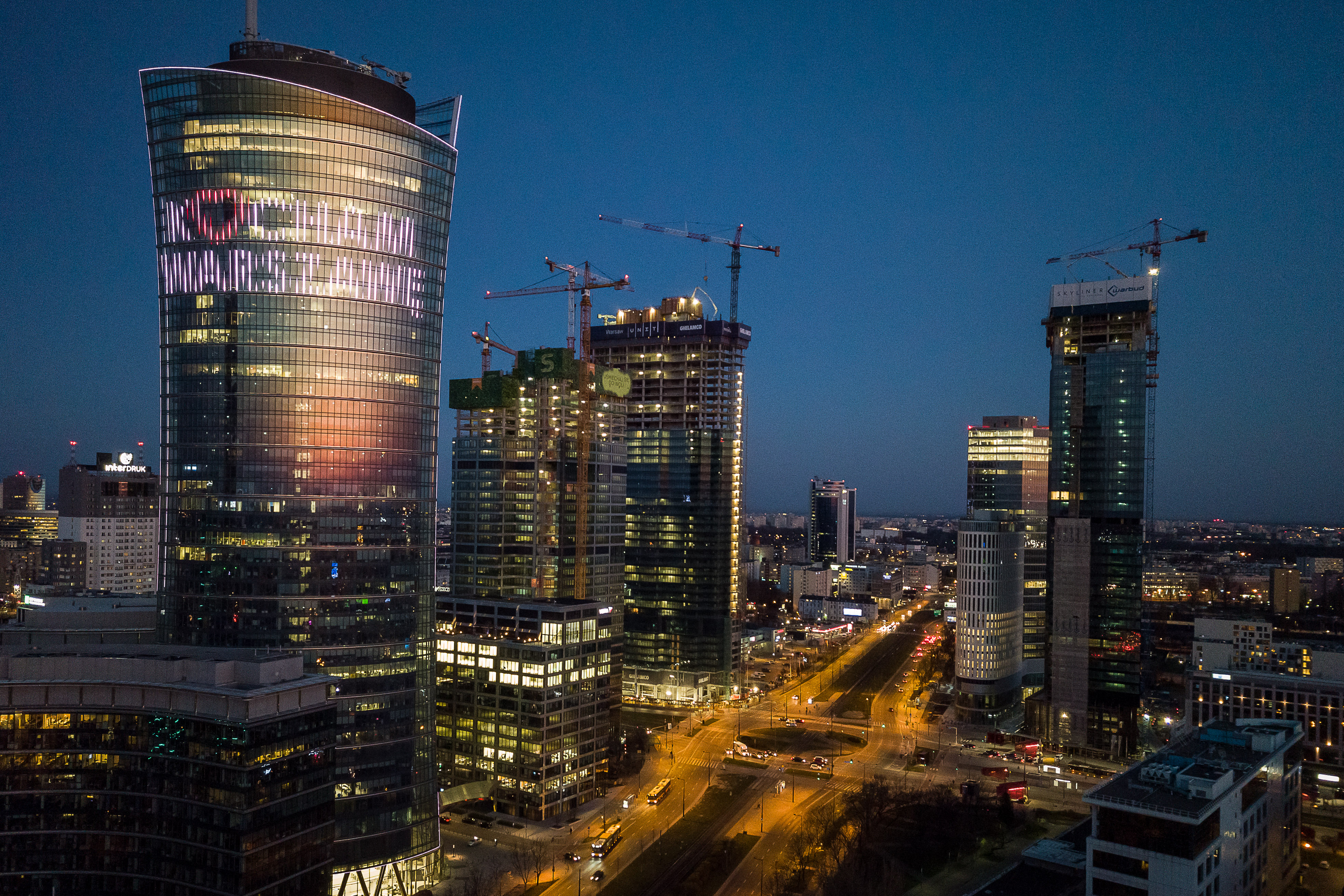 Partially, these are still relevant sentiments, and possibly nowhere does a better job of highlighting the rebuilding program than a UNESCO-listed Old Town rebuilt largely in accordance with 21 vedute sketched by the 18th century artist Canaletto. On the post war front, meanwhile, the Palace of Culture remains a gloriously creepy reminder of the Big Brother era (not the TV show, we hasten to add). 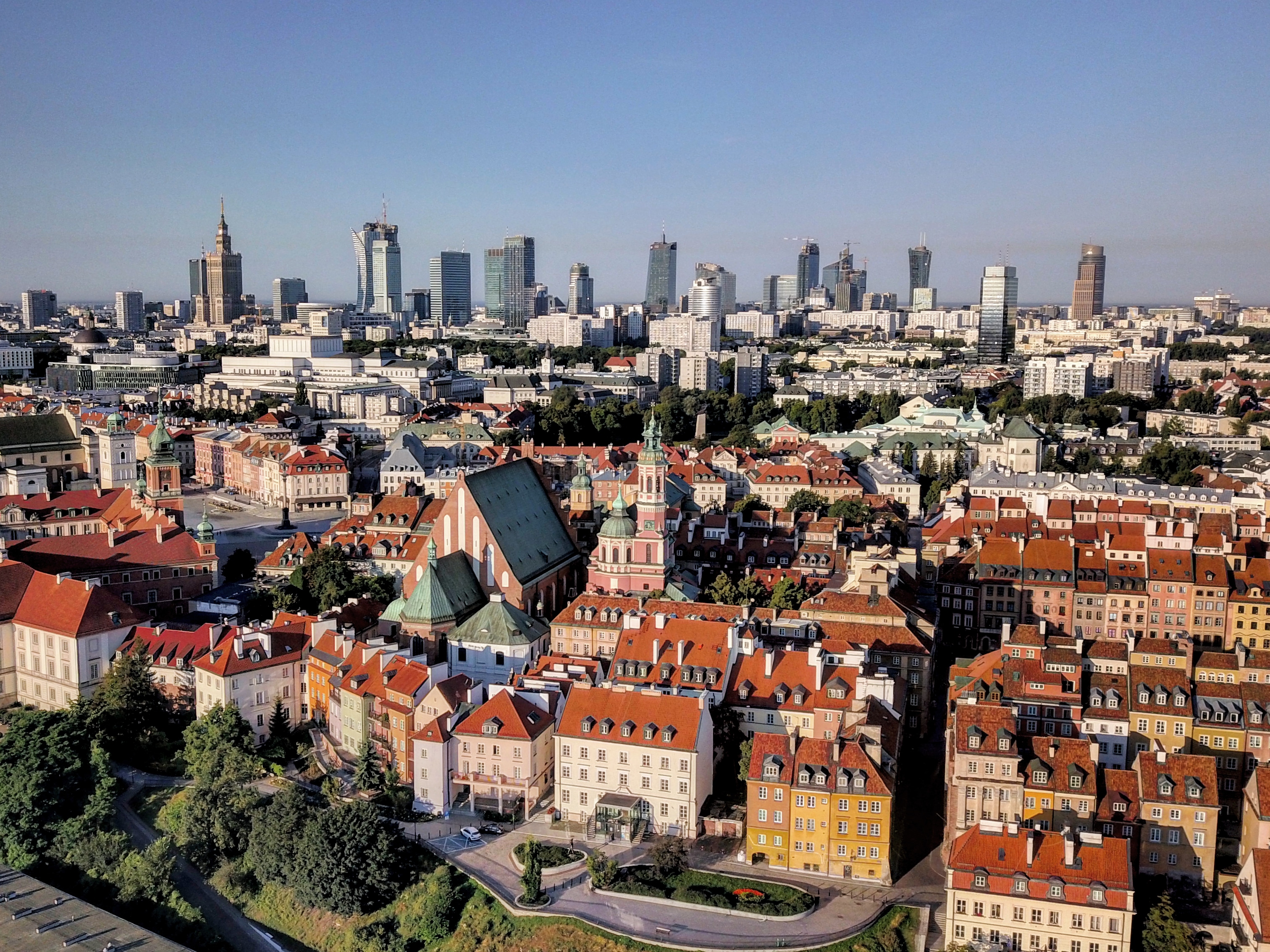 The capital’s UNESCO-listed Old Town was rebuilt largely in accordance with 21 vedute sketched by the 18th century artist Canaletto.Kalbar/TFN

But change is afoot. Within months, the Stalin’s infamous gift will be knocked from its pedestal as the city’s tallest building, a title that will instead go to the Varso Tower, an incredible, Norman Foster-designed skyscraper reflective of the sweeping changes the city has experienced. If the city’s aesthetics still look awkward and patchwork, then this at least has been counter-balanced by an energy that is mirrored by its lively nocturnal scene and a pre-covid gastronomic sector that was finally being noted in the west for its innovation. 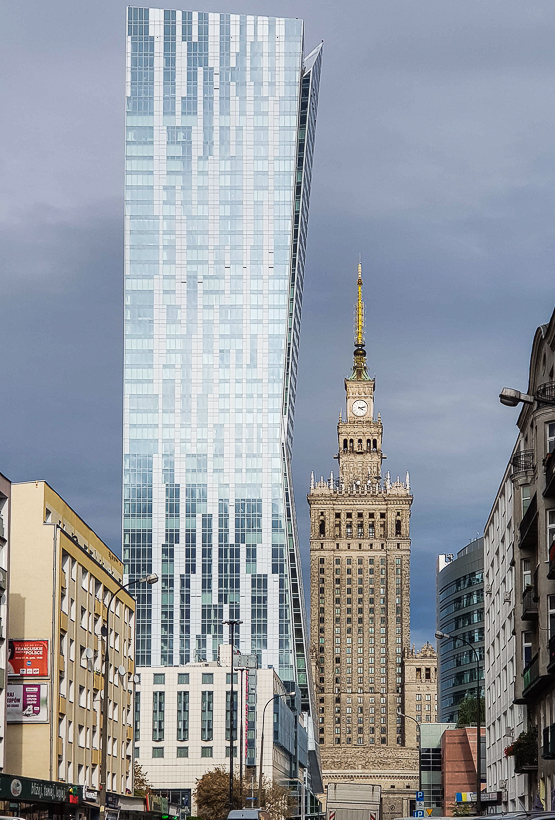 Old and new stand side by side. Kalbar/TFN

Not short on designer splurges, through the presence of Raffles and Nobu the city has made news on the hospitality front, while the Vitkac department store continues to act as byword for luxury. In close proximity, the boutiques of Mokotowska street – itself comprised of tall, pre-war tenements – hark to the time the city was called the Paris of the East.

Of course, contrasts are still abundant: the gritty suburb of Praga with its dive bars, world class murals and kooky Neon Museum stand juxtaposed against restored factory complexes such as Koneser, a project that references its heritage through the world’s biggest vodka museum. And museums, it must be underlined, are what Warsaw is good at: no visit is complete without exploring POLIN Jewish Museum or the ’44 Rising Museum – it is in the latter where the city’s annihilation is truly put in context.

Poland’s biggest tourist trap? You bet! But there’s a reason Kraków’s historic cobbled streets sink each summer under the collective weight of the visiting planet. A city of spellbinding beauty and entrancing history, few places on earth possess the same magic potion that makes Poland’s second city so special.

Naturally, it is the Old Town to which people head, and seemingly every street is not without a landmark: the pointy-towered Barbakan; the cloistered Jagiellonian Uni; Floriańska with its medieval gateway; and then the Rynek, with its central Cloth Hall and soaring spires of St. Mary’s Basilica. 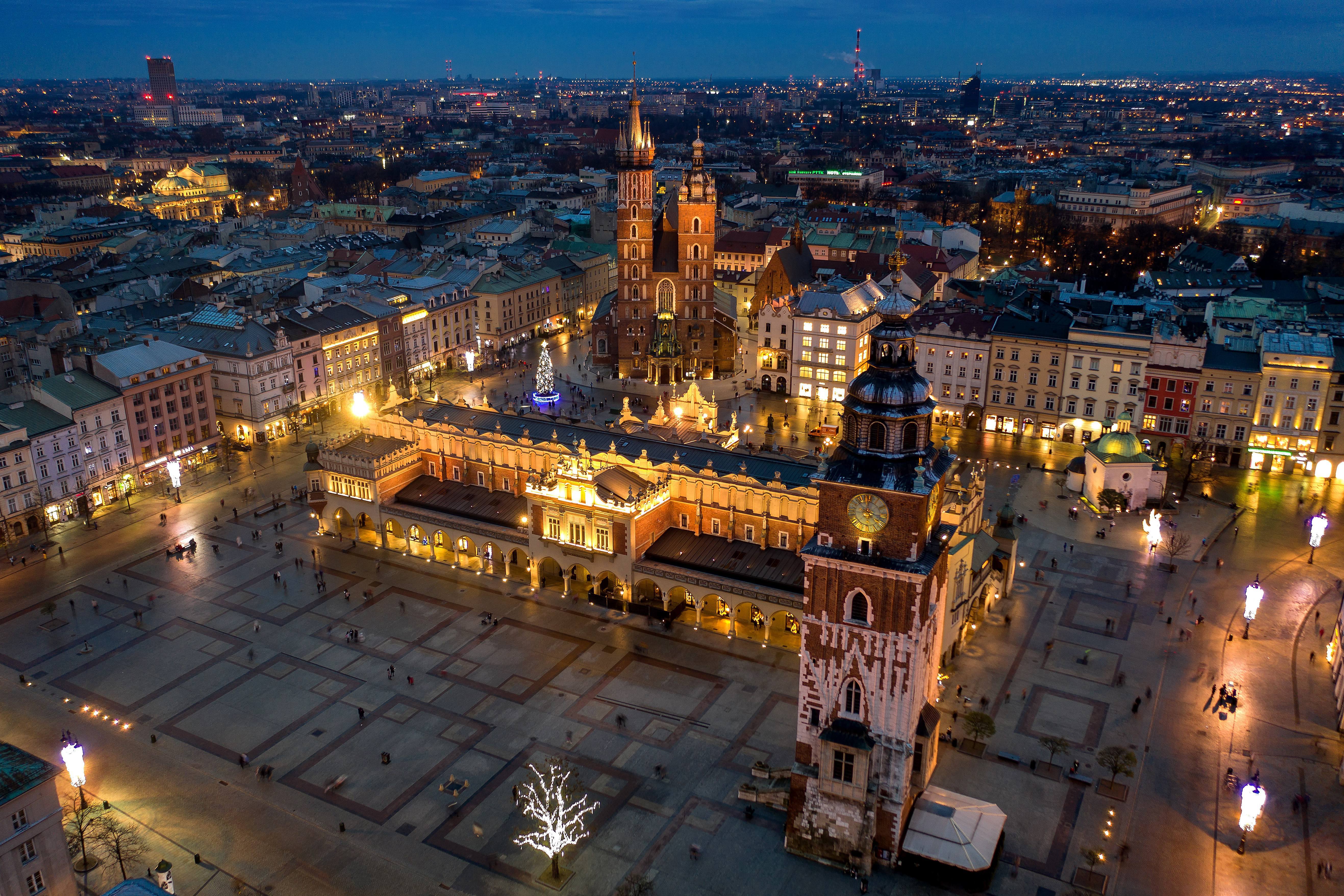 Ringed by the elegant Planty Park, you could stay within the perimeter of Old Town and never get bored, but doing so would overlook Wawel Castle not to mention a Jewish Quarter that has rebounded to become the centre of the city’s social life.

In part, it was the success of Spielberg’s film Schindler’s List that burned Kraków into the world’s conscience, and both Schindler and the German occupation are remembered at a stunning multimedia exhibition in his former Podgórze factory. While better known for its pretty streets, Kraków’s darker side is never far removed, and for lovers of the unusual then the Socialist Realist suburb of Nowa Huta is a marvellous plunge into the dark days of Communism – who can fail to feel the paranoia of the epoch while exploring the area’s nuclear shelters. 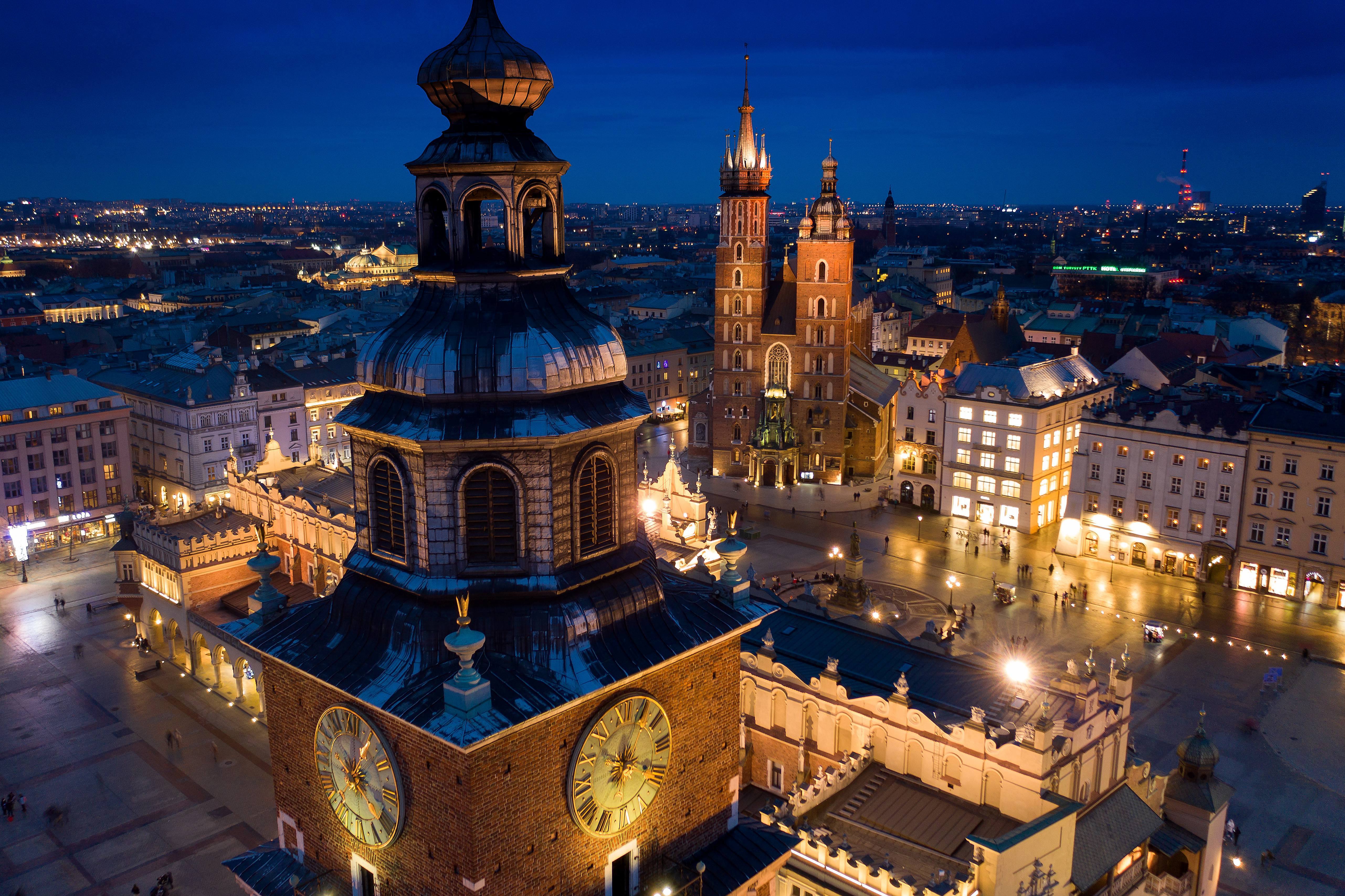 Befitting of Kraków’s status as Poland’s touristic calling card, nowhere in the country boasts a higher headcount of hotels, and while many are aimed at the mass market, others such as the Copernicus, Stary and Bonerowski Palace riff on the city’s heritage to present luxury lodgings drenched in original historical details. On the dining front, meanwhile, the top end is covered by Michelin starred Bottiglieria 1881.

But Kraków’s universal appeal is helped copiously by the fact that deep pockets are not mandatory. With a rich street food scene and lively pub scene bankrolled by students and backpackers, a dull time is impossible in this former royal city.

And onwards! Connected directly to Warsaw, Gdynia and Kraków, the German capital of Berlin punches at the same level as the world’s greatest cities – as such, repeat weekends aren’t so much recommended as they are totally required. 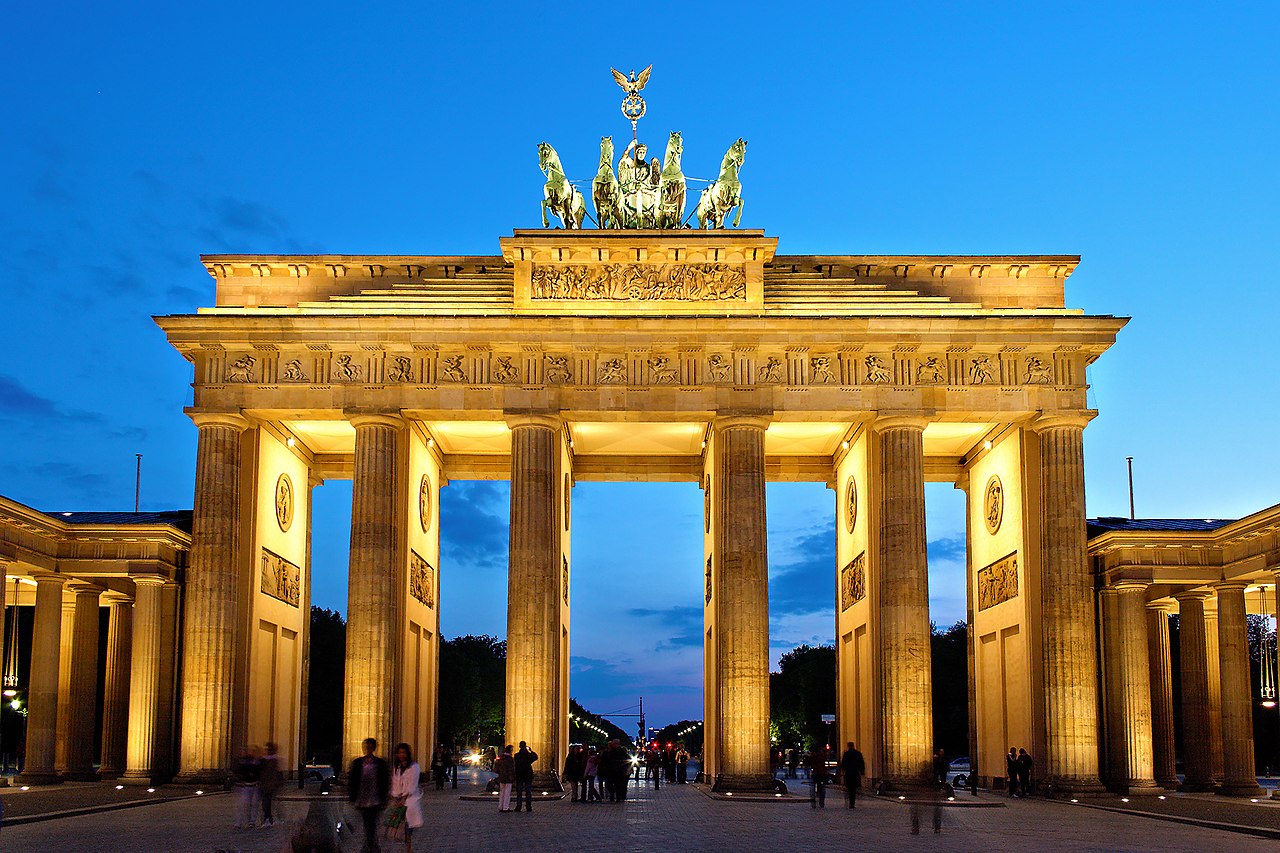 Connected directly to Warsaw, Gdynia and Kraków, the German capital of Berlin punches at the same level as the world’s greatest cities.C BY-SA 3.0/PAP

Impossible to surmise in but a pinch of paragraphs, of the mainstream attractions the Brandenburg Gate is essential, as is a visit to the home of German politics: the neo Baroque Reichstag, today topped with a glass dome designed by Norman Foster. Famously carved in two following WWII, Checkpoint Charlie and the few remnants of the Berlin Wall are a nod to the city’s complex 20th century history – and don’t miss the DDR Museum, a stunning, interactive portrayal of German life behind the Iron Curtain. 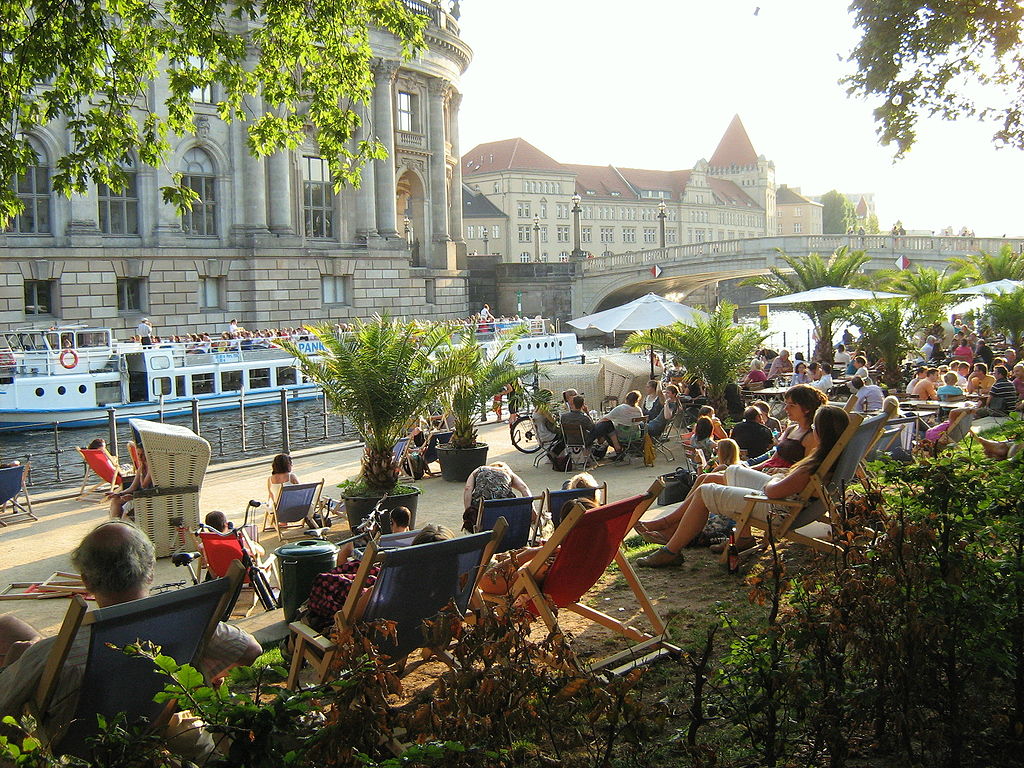 Berlin’s cultural significance is unquestionable, but this represents just one cannon in its substantial arsenal.Public domain

Berlin’s cultural significance is unquestionable, but this represents just one cannon in its substantial arsenal. Exceptional shopping opportunities await in the Ku'damm retail district, the pop-up-style Bikini Berlin concept mall, the vintage Humana or the legendary KaDeWe department store, though the real thrill lies in exploring thrift markets in locations such as Mauerpark. 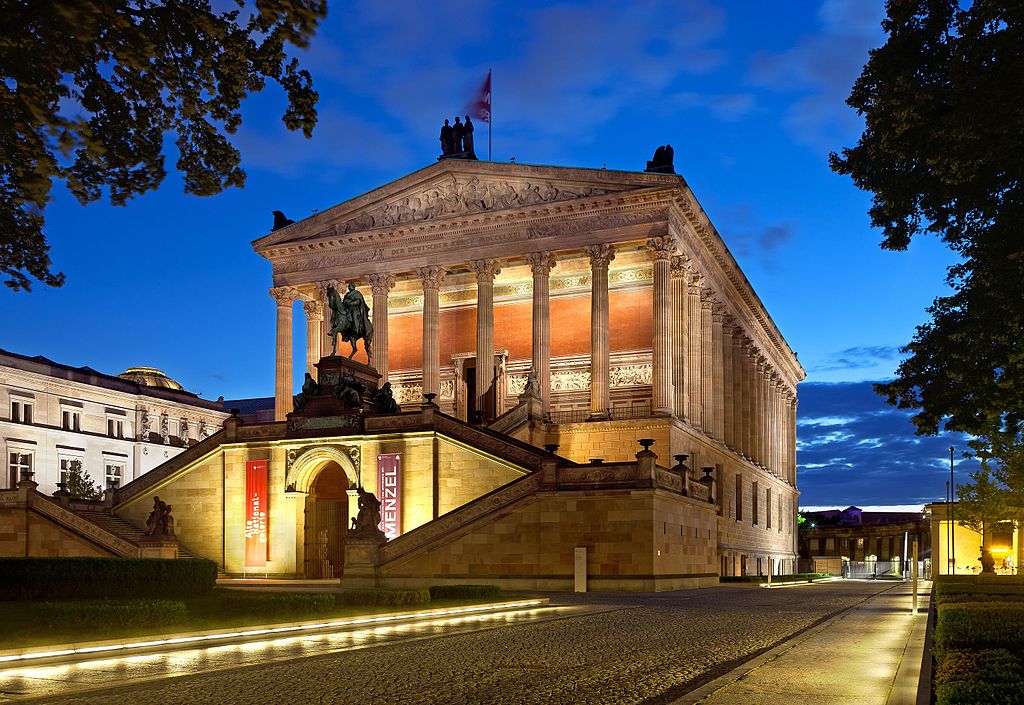 Berlin’s diversity is impossible to escape, and this strongly manifests itself by way of a rich street food offer and restaurant choice, but even more so through a daring and decadent nightlife that has been long lionized: from the inter-war cabarets frequented by Christopher Isherwood to the artsy hangouts once visited by Iggy Pop and David Bowie.

Maverick to the extreme, options run the gamut from sweaty techno factories to sophisticated speakeasies via raucous local pubs and divey dens of impossible creativity. Berlin is where life happens.

The train is air-conditioned throughout and includes a dining wagon. It is also possible to transport bikes.

With Covid-19 still a hot topic, when planning a trip with PKP Intercity users are urged to familiarize themselves with the conditions applicable to visiting and staying in a different country. For updated info, see: https://www.gov.pl/web/dyplomacja/informacje-dla-podrozujacych

Promotional prices are available three-days before departure with the price depending on the availability of seats (prices change dynamically depending demand). Once discounted tickets are all purchased, tickets are made available at their base price both online https://www.intercity.pl/pl/ and at stationary ticket offices.