The brutal truth: the man who loves the brutalism of architecture

David Navarro first came to Poland to pursue his love for Polish poster art. But the country striking architecture gripped his imagination, and before long he was publishing books on the subject in Zupagrafika publishing house, and had a burgeoning reputation as an expert on modernist architecture.

The First News: How did you first come to Poland?

David Navarro: I was a graphic designer with my own studio in Spain, is Saragossa. Ten years ago I decided to have a closer look to Poland, because Poland was the country in which my main references and inspirations were coming from. I mean the mid 20th century Polish Poster School, like Jan Lenica, Henryk Tomaszewski and other Polish masters of theatre and cinema posters.

TFN: How did you discover Polish posters despite being Spanish?

DN: I discovered them as a child. My parents used to work at a printing house. And they used to collect American graphic magazines called “Graphis”, of which I was a big fan, and in them there were published, quite often, the work of Polish poster artists. Those impressive images became deeply rooted in my brain. So, the main reason for visiting Poland was to find out why this country gave to the world these amazing images.

TFN: Did you come to Poland alone?

DN: No, I came here with my brother, who is an architect, with whom I have also worked professionally as a graphic designer. So, because of his education and interests, we were looking not only for Polish posters background, but at the same time, for the examples of Polish post-war architecture. 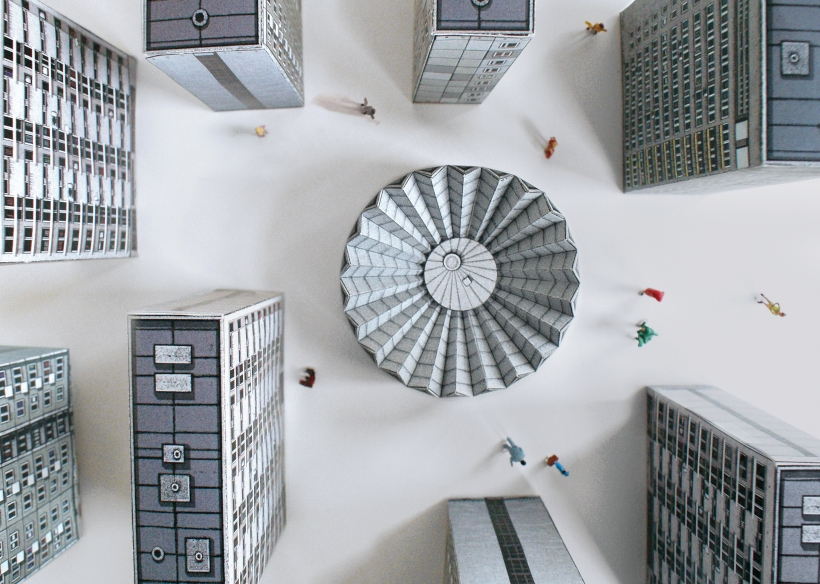 TFN: And what was your impression from this first encounter with Poland’s modernist architecture?

DN: I wouldn’t call it “an impression”, it was more like an electric shock! I was shocked not only by the icons of Polish modernist architecture, like Rotunda or Emilia, but by the large panel-plate blocks, called in Polish “wielka płyta”. They really had a big impact on me. Like, for example, Rataje district in Poznań. They really grabbed my attention as a graphic designer.

TFN: Tell me about the switch from a single trip to Poland to your decision to establish a very unusual publishing house here.

DN: Everything happened slowly, let’s say, in a natural way. First, I decided that I must come back to Poland. At that time we didn’t have cheap airlines, so it was quite expensive to come to Poland from Spain frequently. But it was worth it. During one of my trips to Poland I met Martyna, who also comes from an artistic environment – her father was an engraver from Poznań. And together we started to think about opening a graphic design studio in Poznań. First it was like working both in Saragossa and Poznań. 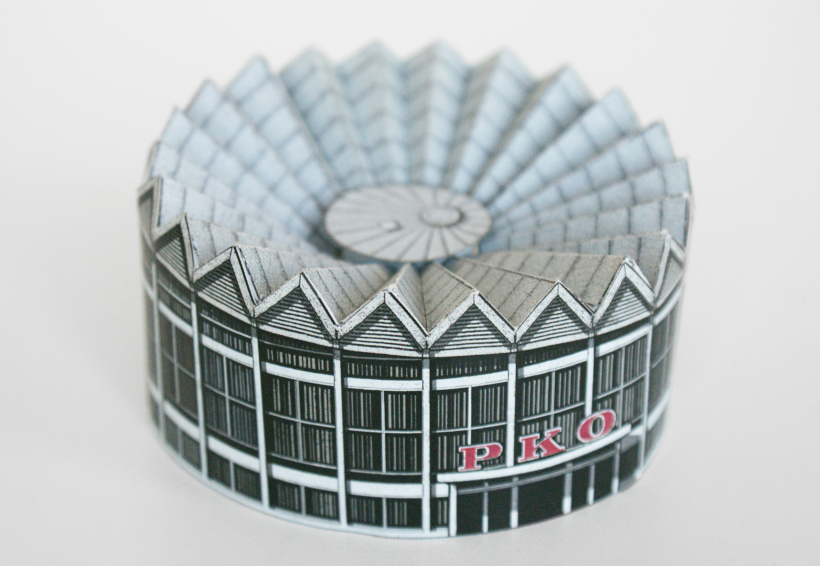 TFN: But soon you decided to publish your own books, right?

DN: Right. First we started with publishing little cutouts of some examples of modernist architecture in Poznań. It was entitled “Miasto Blok-How”, and was published in 2012. I must confess, that at the time this activity of ours wasn’t intended to be full-time job.

TFN: What kind of reception did your first work get?

DN: When our first book with cutouts was published, the perception of socialist modernist architecture was still controversial, everyone felt obliged to express their opinion – so, as a consequence, people started to talk about our work. The interaction was really interesting for us. Some people loved it, some people hated it – I don’t remember anything in between.

TFN: At the time it was local – you reached readers mostly in the city of Poznań, yes?

DN: Yes, it was a local publication back then, it didn’t reach many people outside Poznań. 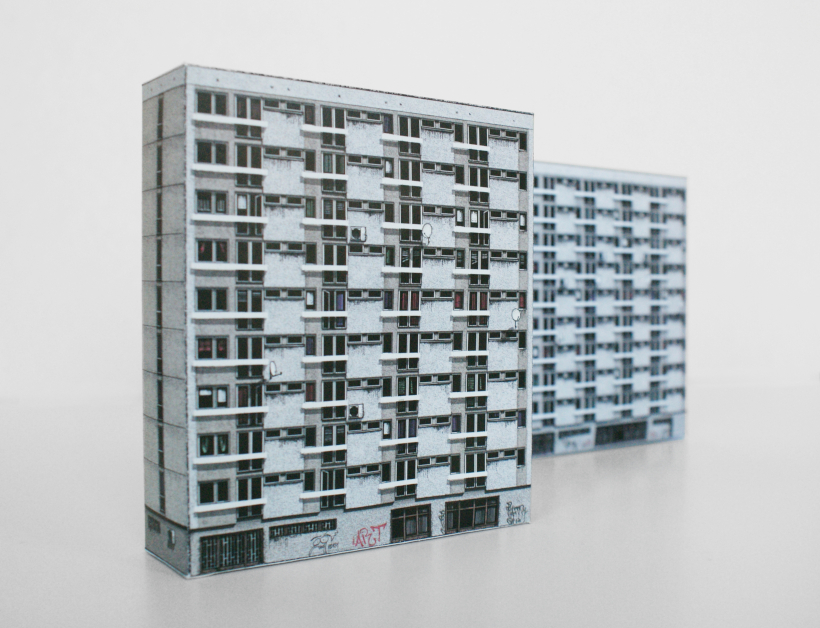 TFN: So what was your next step?

DN: The next step was Warsaw, which was quite a natural decision. We were travelling a lot from Poznań to Warsaw, and we were trying to understand the capital of Poland by creating a similar publication as we had done for Poznań. Especially we were interested in the original preserved examples of large panel-plate buildings in the suburbs of the city. We found it quite difficult, because mostly all of those building were thermo-modernised, and only a very few examples were left intact. So we started from those building, adding some architectural icons from the city centre, like the Rotunda. When we finally published it in 2014, under the name “Blok Wschodni / Eastern Block”, it had a nationwide and positive reception, and got awards at the Łódź Design Festival. And we were invited to show our publications in London. 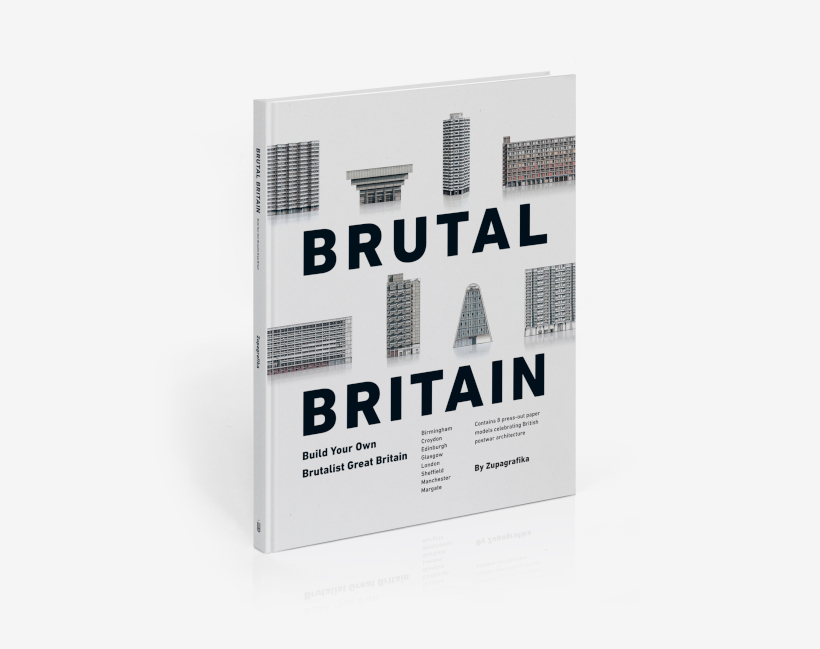 TFN: Speaking about travelling to London, I must ask you about the trips that you certainly must have made while working on your books.

DN: Actually, all our publications about different places are excuses for our trips. But also we are taking opportunities. And it was exactly what happened with our first professional trip to London. Of course, we knew before about iconic examples of brutalist architecture in Britain. Staying there we took a closer look at one of the less-known examples. And this kind of British architecture reminded us very much of Polish modernist architecture. So, we decided to make another collection of illustrated paper cut-out models, entitled “Brutal London”, which came to light in 2015. We needed to hurry, because some of the building were supposed to be demolished, and we wanted to preserve them in our book. 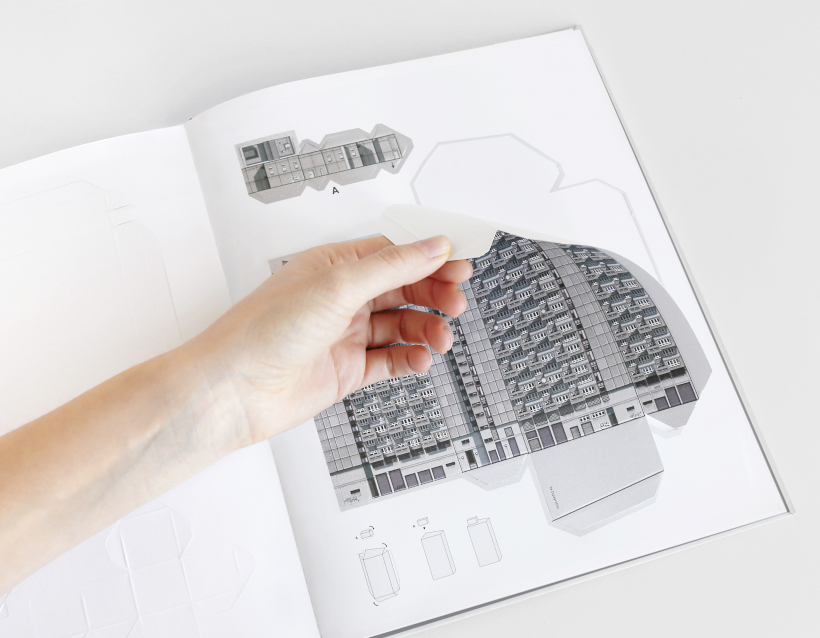 TFN: You came back from the British Isles to the continent for a moment.

DN: Yes, and we published “Paris Brut” and “Blokowice”, the last one devoted to modernist and brutalist architecture of Katowice, the capital of Upper Silesian. But it was our book on London which gave us unexpected international recognition. Our work was mentioned in newspapers and magazines, and one prestigious publishing house – Prestel - asked us if we were interested in making a book, which we already were thinking about. And the fruit is a book entitled “Brutal London”, with a foreword written by one of the most famous architects, Norman Foster. 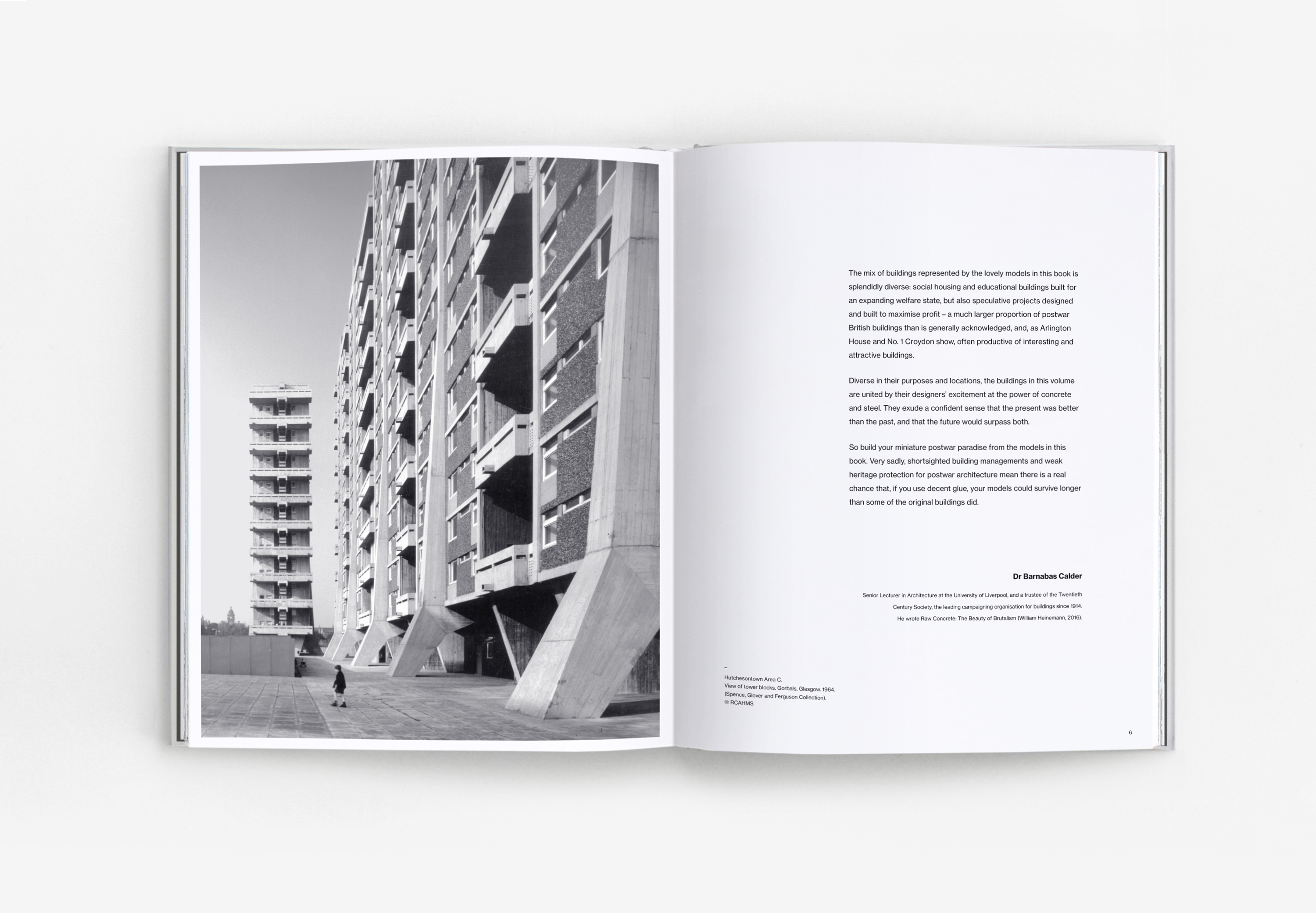 TFN: But it wasn’t your last word on British modernist architecture.

DN: No. Last year we published a book entitled “Brutal Britain. Build Your Own Brutalist Great Britain”. And again, the reception was very good, the Britons are really open to this kind of publication. They really liked the idea that a Polish publishing house in putting its finger in what is a part of their own cultural heritage.

TFN: At the end of our conversation I would like to ask you about the future. What are your next steps in spreading the knowledge of modernist architecture?

DN: Now we are a full time publishing house, and we want to take new trips to new places and later publish our books about them. 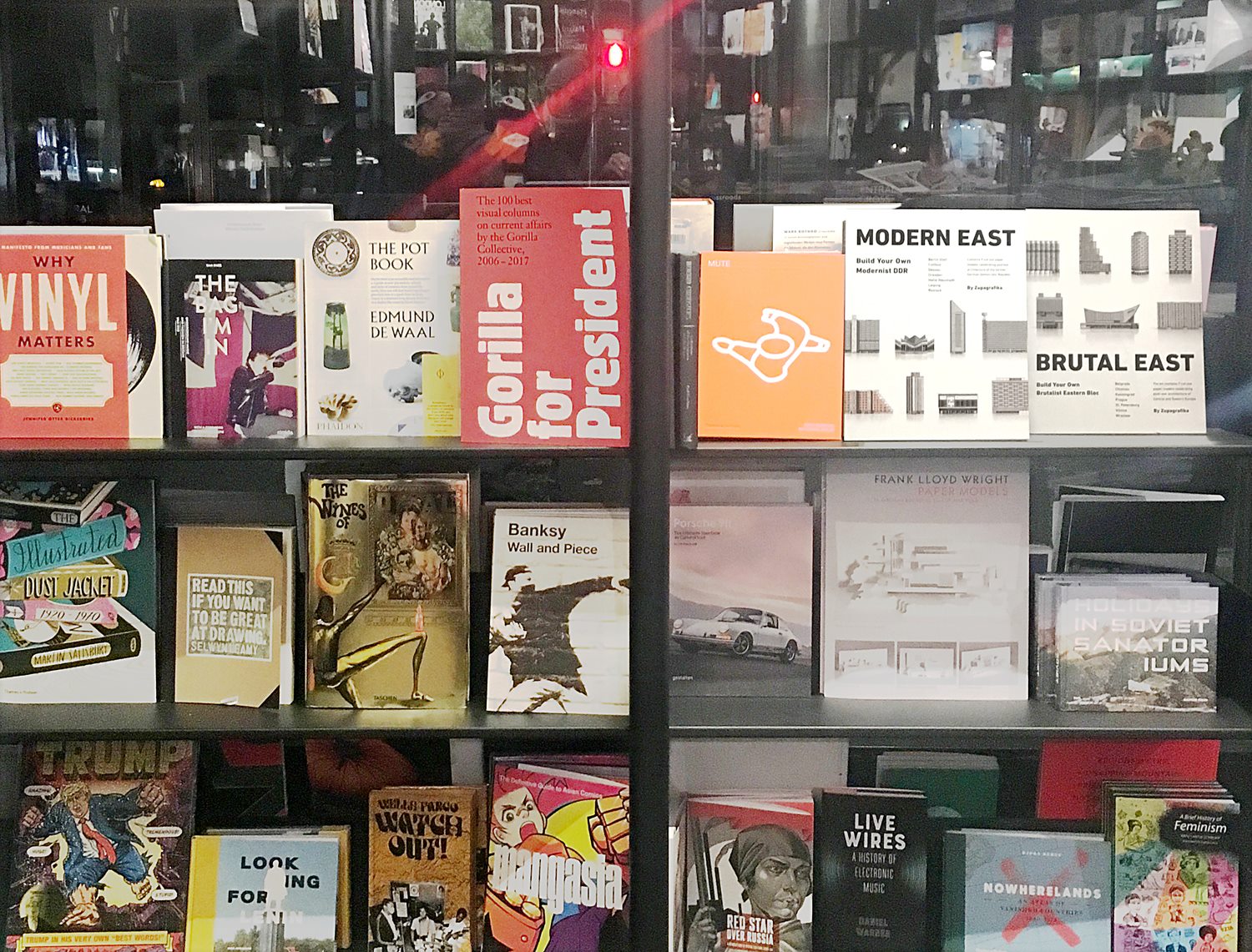 Zupagrafika books spotted at the bookstore in London.Zupagrafika / Facebook

DN: Well, our next book will be out this spring, and it is a photography album showcasing post-war suburban architecture of Central and Eastern Europe we have been shooting for the last decade. Also, in a close future we really want to discover what is going on in Siberian cities. And then we want to share our impressions with our readers through our books.