The Art Of Zen: TFN meets Zenek, the first ‘comfort dog’ to supply paw-sitive energy in a Polish airport

Stress, anxiety, frustration, rage: just some of the negative emotions associated with airports.

At Kraków John Paul II International, however, officials are fighting back and looking to put the joy back into travel. Their secret weapon? A four-legged ‘therapet’ by the name of Zenek. 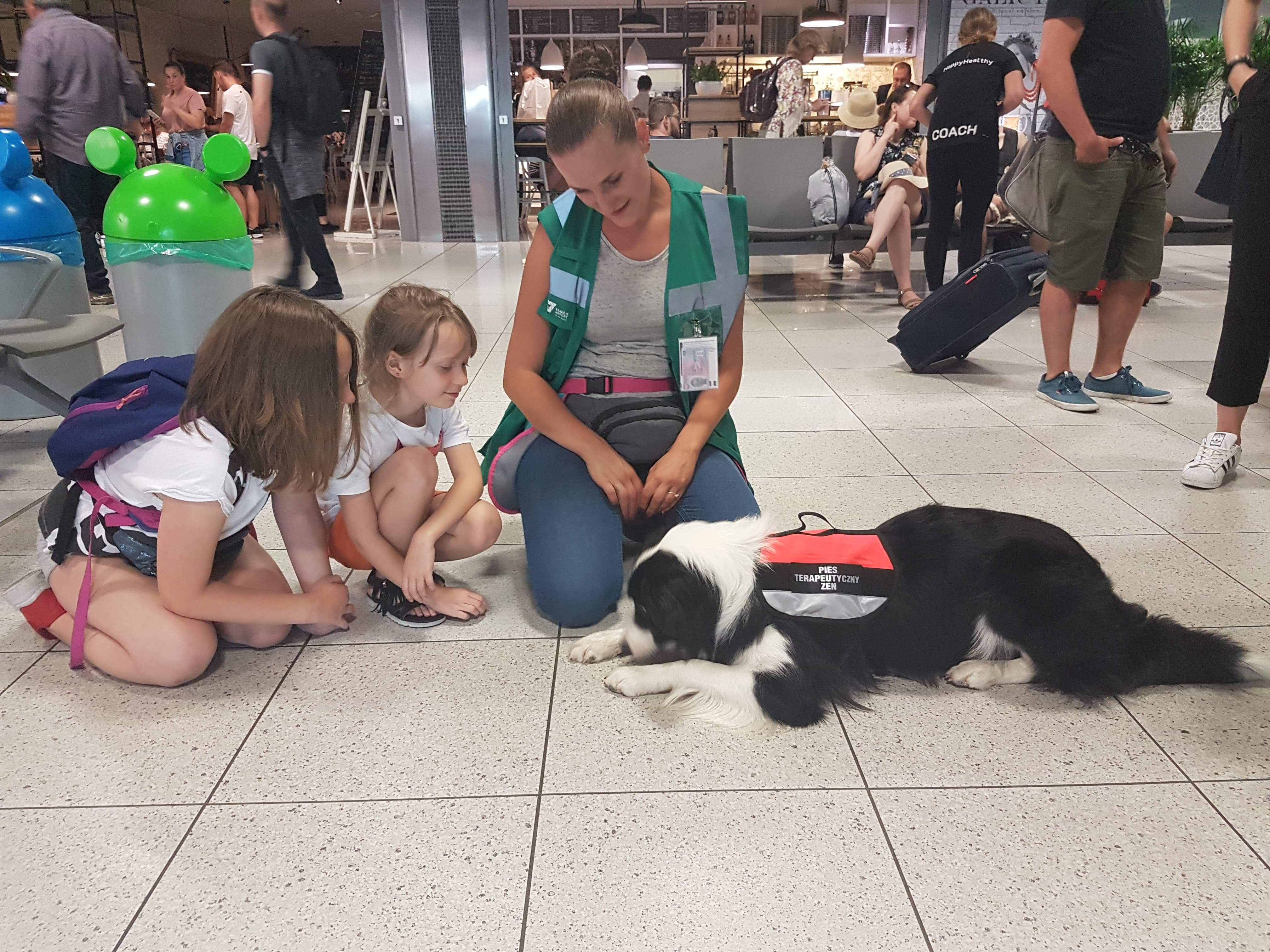 Walking around waiting for cuddles might sound easy, but a strong psyche, the right genes and superb social skills are imperative.Akademia Dobrych Manier Biały Pies

At 18-months-old, the Border Collie has become the youngest addition to the staff, appearing in the departures terminal with the specific purpose of relieving stress and lightening the mood.

“Ultimately, he’s being trained to serve as a Search & Rescue dog,” Katarzyna Harmata, his handler tells TFN, “but the airport contacted me to see if I’d be interested in working with them to help alleviate the anxiety of travelling passengers.” 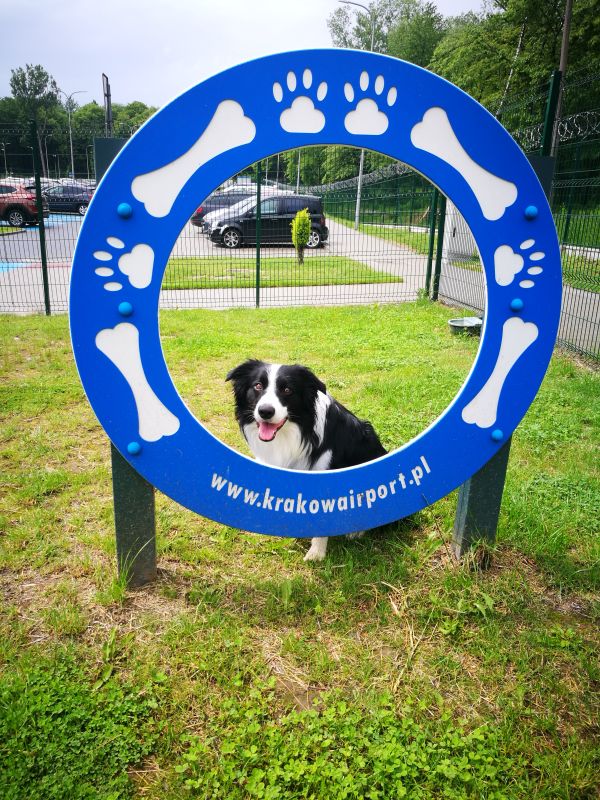 For Katarzyna, a professional dog trainer and behavioural specialist, this wasn’t a decision taken lightly. “I was a little apprehensive at first,” she admits, “but the more I thought about it the more it made sense. Zenek isn’t afraid of anything so I figured we’d take some small steps and see how it went.”

Working two weekly shifts of two hours a piece, Zenek has become an unlikely celebrity starring on numerous twitter feeds and even TV. “This is the beginning, so we’re still on a learning curve,” says Katarzyna. “We’ll wait to see if he continues to enjoy this and if he can do more.” 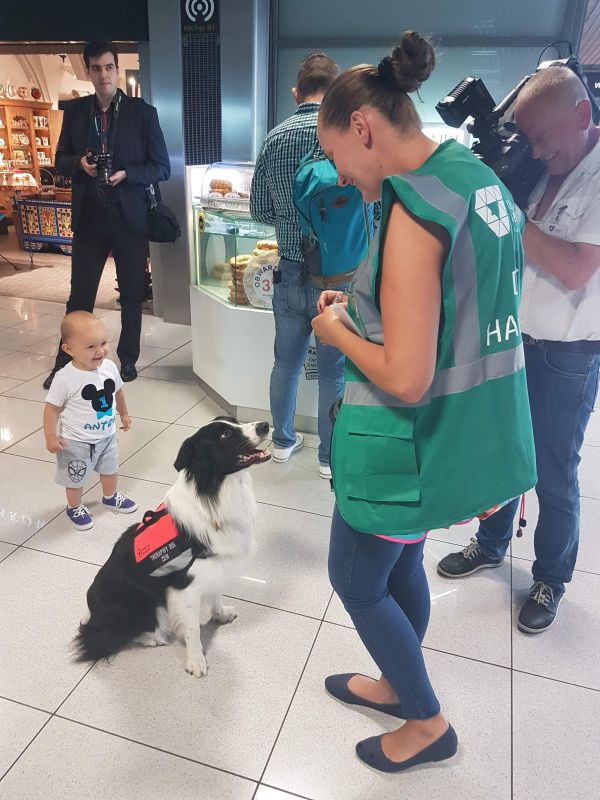 If walking around waiting for cuddles sounds easy, it’s actually anything but. “I can’t predict if this idea will take-off around Poland,” says Katarzyna, “because the truth is there aren’t that many dogs capable of doing this – and I say that with fifteen years of experience working with animals.”

Of the talents required, a strong psyche, the right genes and superb social skills are imperative. “The dog has to be brave,” says Katarzyna, “it can’t scare easily. It needs a calm demeanour and, obviously, to be happy around people. In Zenek’s case, he was socialized from a very young age – I used to take him to Kraków’s Rynek, or on car trips with lots people – but even so I’m very careful to make sure he takes regular breaks at ‘work’ and has a special place in which he can rest to prevent any emotional exhaustion.” 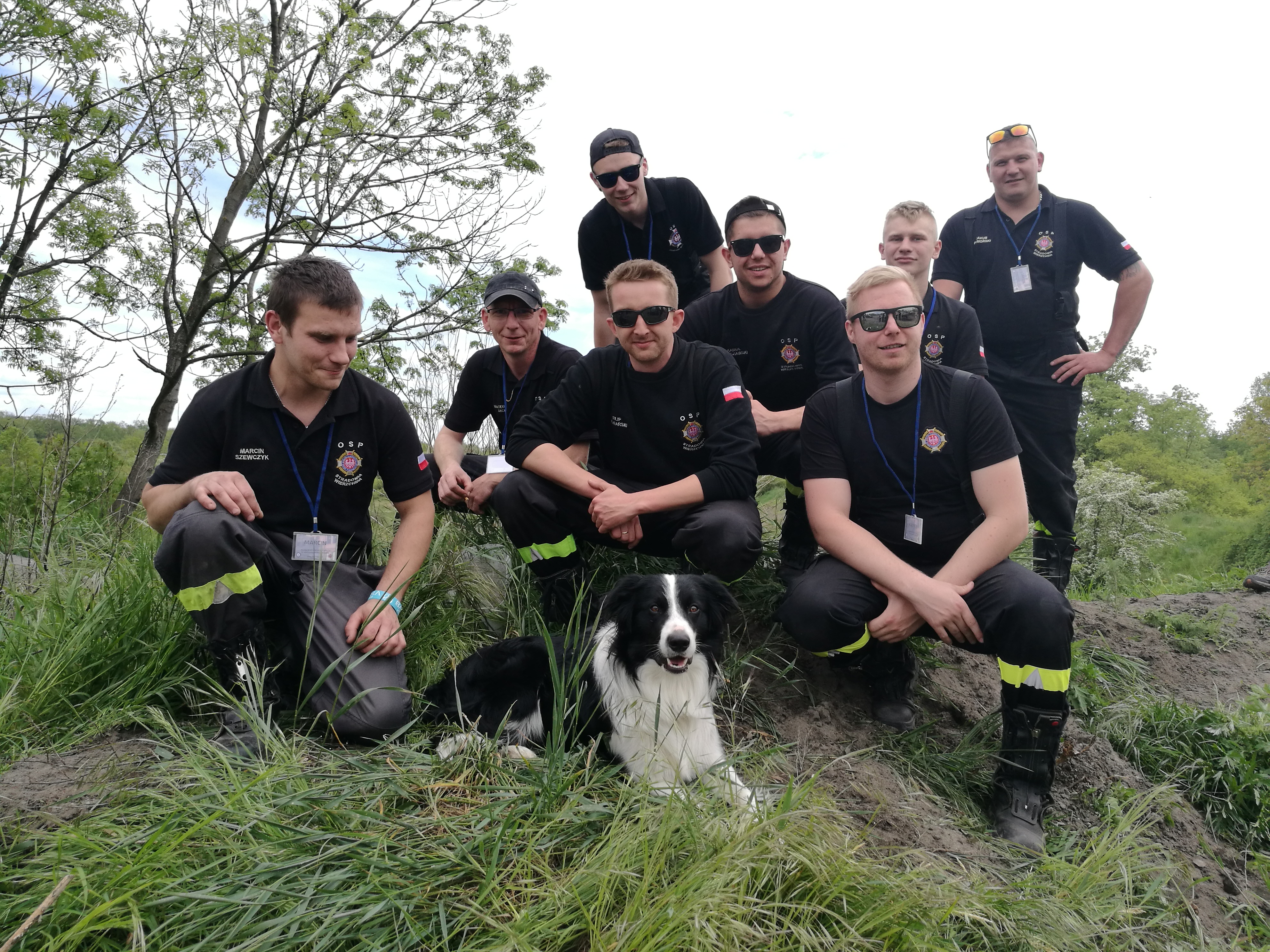 Ultimately, Zenek is being trained to serve as a Search & Rescue dog, alongside local firemen and police officers.Akademia Dobrych Manier Biały Pies

Zenek, whose favourite extra-curricular activities Katarzyna lists as playing catch and paddling in water, has proved to be a natural with his personality perfectly matched to the rigours of the job. “He’s curious but very obedient,” says Katarzyna, “and although he loves playing with other dogs, given the choice he usually prefers to approach their owners first.”

But whilst Zenek has become the first comfort dog to work in a Polish airport, the idea as such is neither new nor a gimmick. Originally introduced by a handful of American airports to aid jittery fliers following the 9/11 terrorist attacks, the number of places employing animals has soared. In the States, 58 airports were reported to have comfort dogs in 2018. Across the Atlantic, Aberdeen became the first British airport to do so with the creation last year of its 14-strong ‘Canine Crew’. 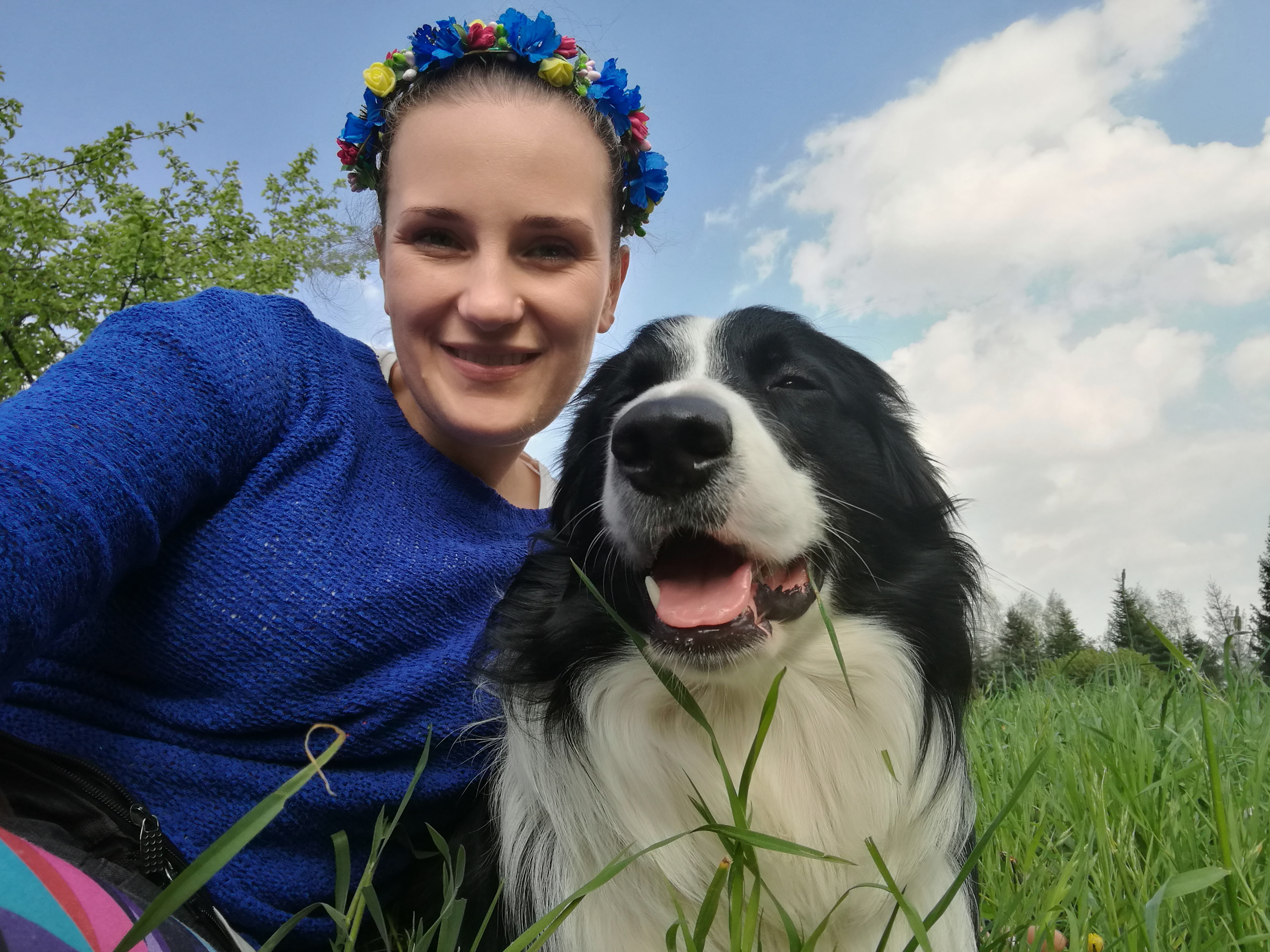 The benefits have been tangible, with scientific studies proving that animals – and in particular dogs – can reduce blood pressure and anxiety while simultaneously enhancing feelings of general wellbeing.

“Zenek makes people smile,” says Katarzyna, “of course it’s children who take the most interest in him, but we also get business travellers or adult holidaymakers approaching us – no conversation I have is ever the same.” 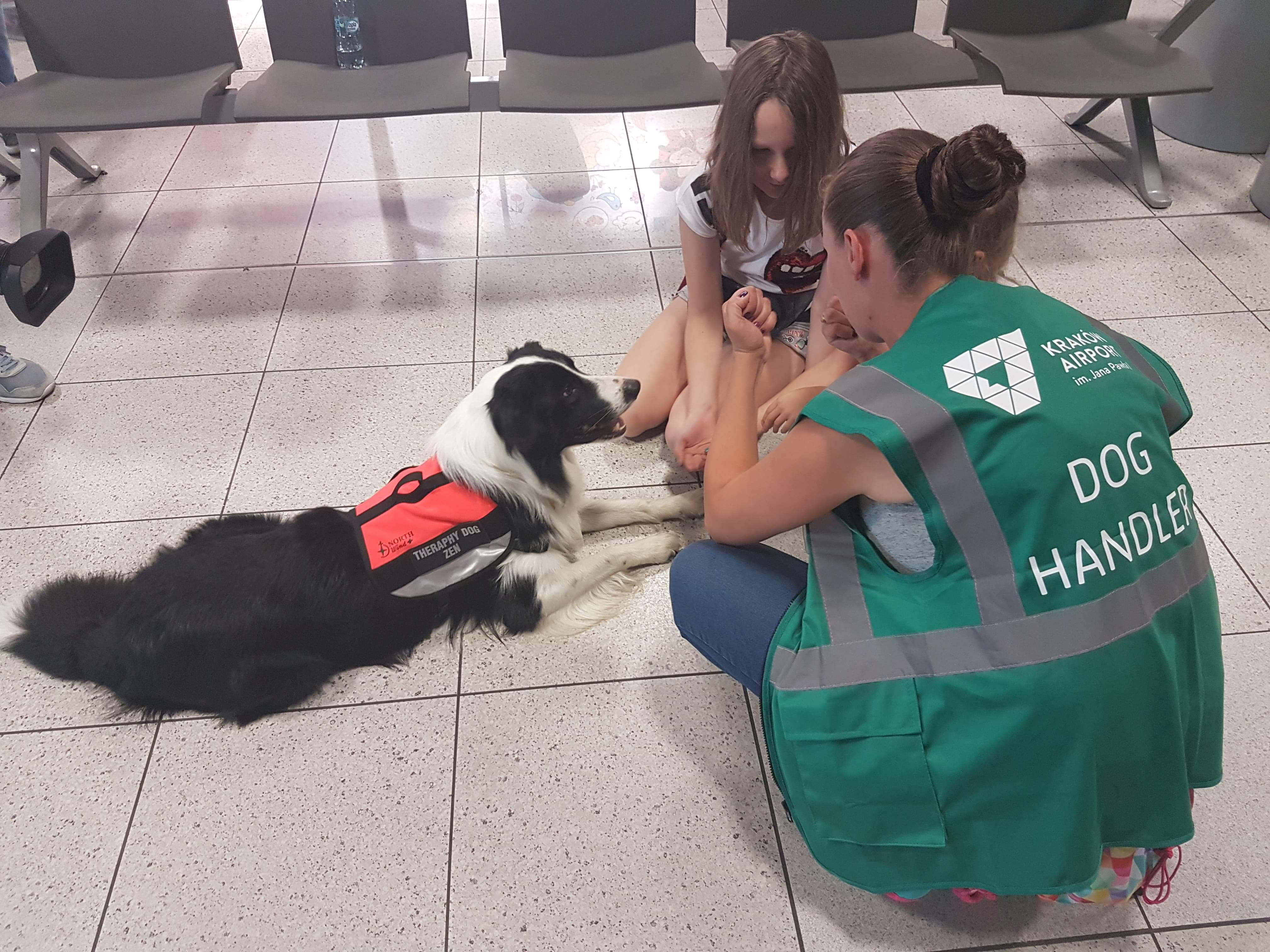 Although at the moment it’s children who take the most interest, Zenek has also been approached by business travellers and adult holidaymakers.Akademia Dobrych Manier Biały Pies

Of the reactions that the handsome pooch has elicited, surprise has ranked highly. “This is a new initiative in Poland,” laughs Katarzyna, “so you can tell that a lot of people think he’s a sniffer dog looking for drugs!” Already though, the public have been quick to take the dog to heart, a point which has given Katarzyna a platform to spread her knowledge.

“From the airport the message is ‘relax, enjoy your flight’,” she says, “but there’s also an important educational aspect to this. By meeting all of these different people we’re able to teach them how to treat dogs, how to touch them, how to understand their body language and recognize the signals they give.” 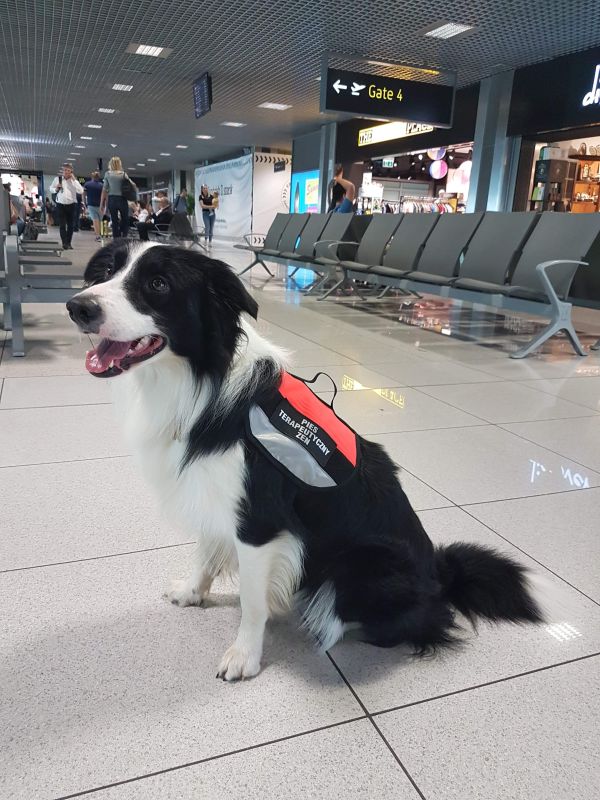 For Zenek, he appears to have landed his dream job. For the passengers of Kraków John Paul II  International, they’ve gained a paw-some new reason to look forward to flying.