Every Monday and Friday at 8 pm a group of volunteers band together at Warsaw Central Station to form Medicine on the Streets, a non-profit organization dedicated to the marginalized.

Together they work on the front lines of homelessness to treat the wounds of the vulnerable.

Made up of a core group of veteran and rookie medical professionals, the most active members include founder, PTSD psychologist and crisis intervention specialist, Anna Jastrzębska, 31, along with five paramedics, a firefighter, two soldiers, a nurse, a combat paramedic, a doctor, a social worker, as well as a high school student.

Often they are the lynchpin in discovering vulnerable parties and guiding them to larger organisations who can give further help. 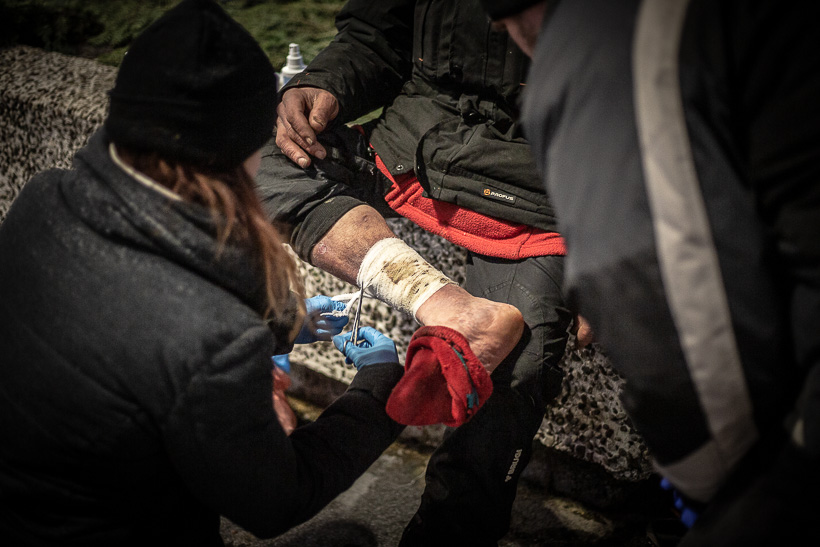 The team of medical volunteers are often the link between identifying vulnerable people and guiding them to other organisations who can help them get back on their feet.Kalbar/TFN

Out on the corner of Central Station where the major streets of Emilii Plater and Al. Jerozolimskie cross is where the medics see their patients. It’s just an exposed city corner, but here the volunteers give medical attention to those who ask for their help.

Usually, it is post-op treatment, or patch up jobs that the group deal with. Starting at 8 pm, they don’t leave until everyone is seen to and Paweł tells me that can vary from 10 PM to 3 AM.

“Sometimes we have to clean maggots from the infected wounds. It's no problem for me now, but the first time I saw it, it was incredible that something can live there. We clean the wounds and pick out the bugs until the wound is healthy again.” 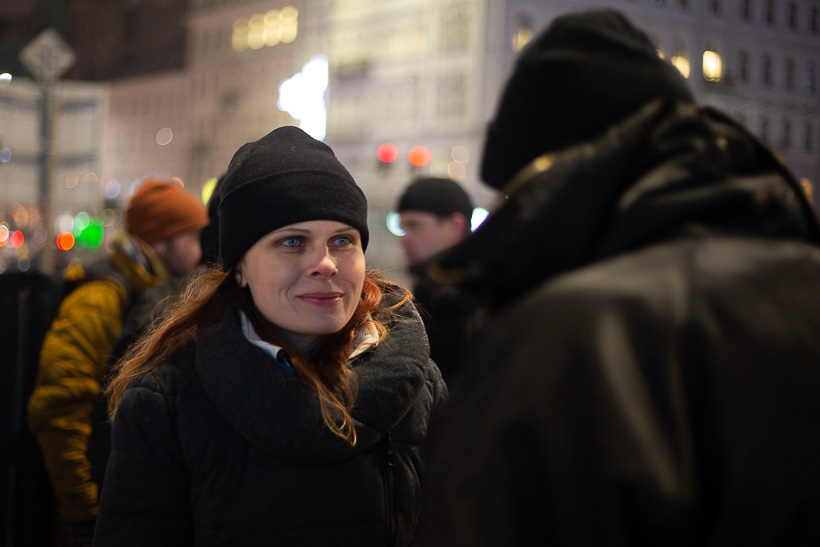 Originally the project was funded from the pockets of the volunteers.Kalbar/TFN

Running independently for nine years in Warsaw, it wasn’t until last year that the project gained charity status with the creation of the Fortior Foundation. Since then the foundation has launched fundraising campaigns to help expand the Medicine on the Streets project with the purchase of an ambulance.

“We treat, not cure,” Bartek Matyszewski, paramedic and Vice President of the Fortior Foundation explains. He’s decked out in his bright orange high vis jacket, medical bag at the ready and a torch stuck to his head.

“When a person comes to us we look at their prescription and follow their doctor's rules. The medical community really supports us.”

Bartek goes on to say that the ambulance they’re campaigning for right now is necessary to continue their work, explaining that the people who need their help aren’t afforded dignity or comfort by having to undress for examination on the streets. 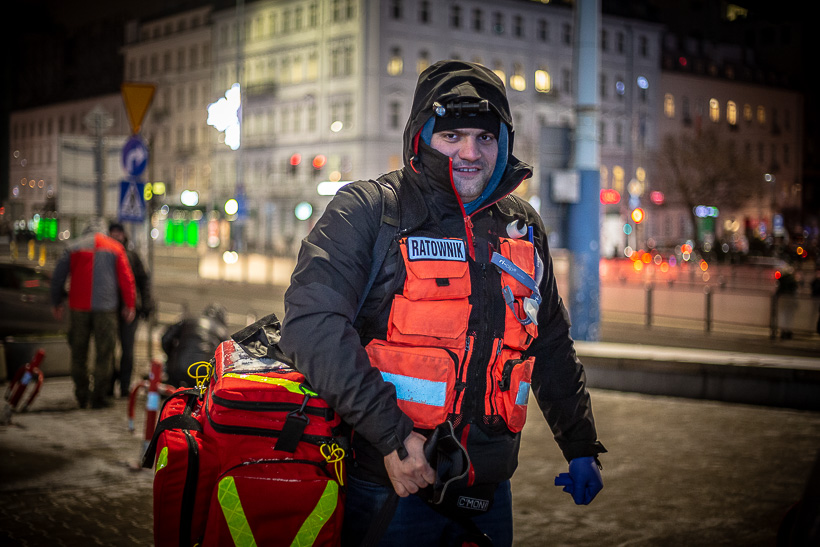 Vice president Bartek [pictured] tells TFN that he isn’t sure exactly how much money he’s spent on supplies for the project, but he would take supply trips twice a week at least.Kalbar/TFN

Before it became a charity, the project was funded from the pockets of the volunteers involved, who would take trips twice a week to stock up on medical supplies.

I ask 28-year-old Bartek how much money he thinks he’s “invested” (as Paweł corrects me) on supplies for the project. “No idea,” he shrugs. “I really haven’t counted it, I just buy it,” like I’m asking how many cups of coffee he’s bought this year.

Bartek, however, excuses himself, telling me he can’t speak to me much longer. “I have to tend to these patients. Maybe we can talk after,” he calls over his shoulder.

Next, I ask around for Anna Jastrzębska, the psychologist and PTSD specialist who founded the project nine years ago. Everyone is bundled up in drab clothes, it’s -5 and we are all numb with the cold; it’s hard to tell volunteer from civilian from homeless tonight. 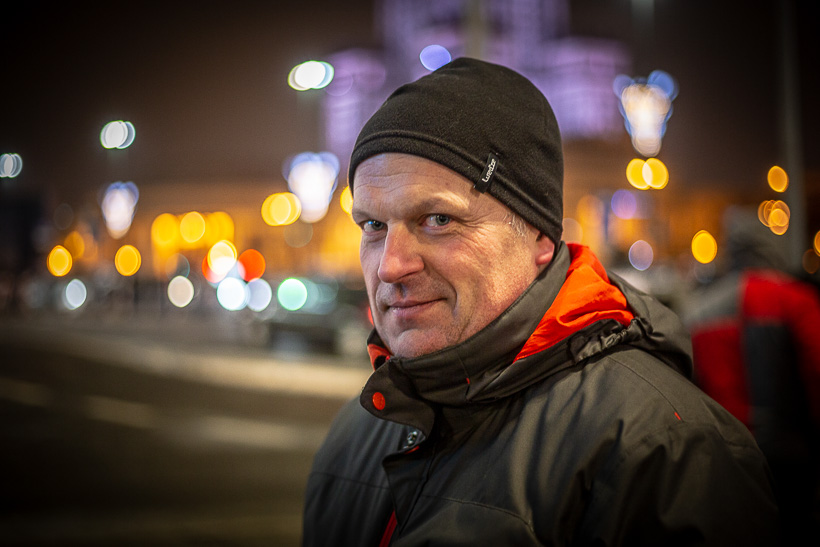 [pictured Vice President of the foundation Paweł Wieczorek]. Now the project is registered to a charity, the group are campaigning for funds to buy an ambulance so they can treat their patients with more dignity.Kalbar/TFN

It’s Paweł who points me in Anna’s direction. She’s crouched on the floor tending to a homeless man's ankle wound.

There are other journalists around too, even a TV crew. The homeless patient, with his exposed foot and weather-beaten face, looks quite amused by the media attention he’s getting. Anna, on the other hand, is focused on the task at hand as Bartek helps her with the dressing.

As she sees the homeless man off, the pair shake hands and he bends down to quickly kiss Anna’s latex-gloved hand in gratitude. I catch her to ask her more about why she started Medicine on the Streets

“We try to help male victims of abuse and sexual assaults, those are our patients,” Anna tells me. “Homeless people aren’t only drunks, they aren’t only people who are struggling with addiction. They were once normal people who have suffered significant traumas.” 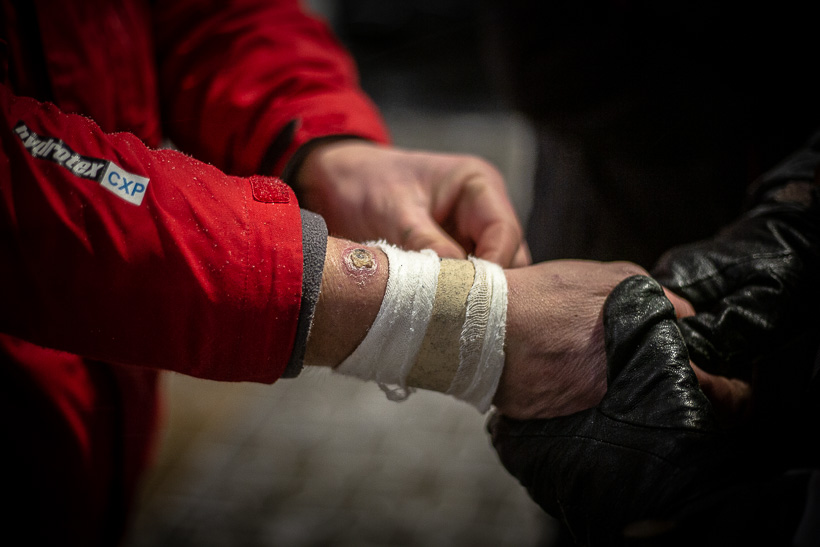 Proud dad and veteran paramedic, Bartek, says the worst moments have been when he loses patients on the street.Kalbar/TFN

It was 2010 when Anna and her paramedic friend, Krzysiek, came across homeless man, Tomek, on the streets who was badly injured. He was an ex-soldier from the war in Afghanistan living on the street. The pair patched him up and the next night Tomek bought other injured homeless people to be treated.

Since then Anna’s initiative has attracted the most dedicated individuals. Snowballing from just Anna and Krzysiek to a team of 14 regular volunteers and growing. However, Anna comments that they don’t allow anyone who isn’t qualified to tend to the wounds.

Paweł tells me the Medicine on the Streets project has bought with it a lot of media attention, which is good as supplies and facilities are urgently needed to help the injured homeless. While it is hard to watch the people they help relapse into addiction and homelessness again, I learn that it isn’t the worst thing to happen while volunteering on the streets.

“The most difficult thing for me is when we have patients dying on the street, I’ve been volunteering for two and a half years and I have seen plenty of deaths on the street,” Bartek tells me. 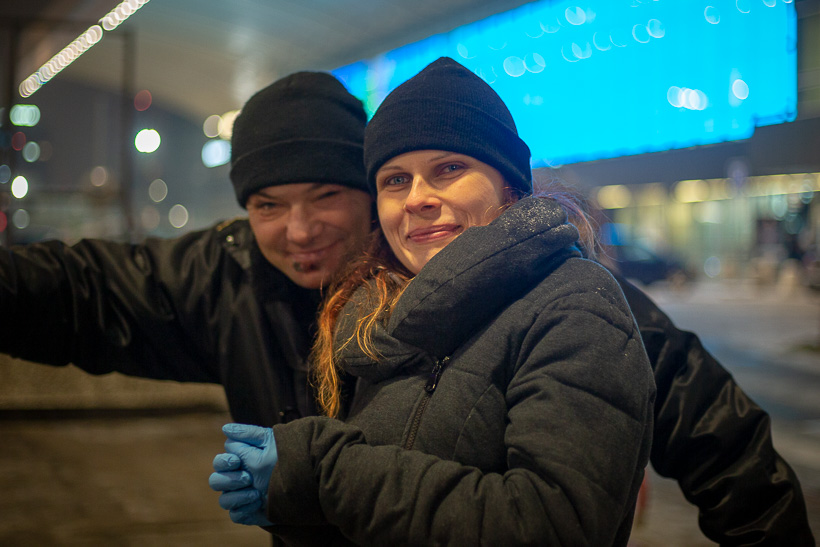 Founder Anna [Pictured with homeless patient] adds that there have been successful moments with helping rehabilitate homeless patients. For now Anna and her team will continue to strive to help men who have been victims of sexual assault and violence.Kalbar/TFN

The humidity in the night air is starting to crystallize around us and thanks to the timely appearance of the wind chill, we’re getting hit in the face with tiny shards of ice. Anna hops from foot to foot and tells me that despite the dark moments all the team have encountered on the streets there have been some that make it worthwhile.

“One of our patients recently got married! We were at his wedding. It was really beautiful because we did not expect it to succeed, it was such a difficult situation, a difficult case and a man with a very hard history. We did everything we could to put him on his feet and to fix everything. And the efforts were successful, the wedding was this year and we are very proud of him!”

With two full-time jobs as a psychologist and a teacher, Anna still ventures out on the streets of Warsaw twice a week as she has done for nearly a decade to help vulnerable homeless men.

She explained: “There’s a stigma because of being homeless, but we try to treat them like normal people, we love people, that’s all. For us they are just normal people. I know, that I’m here right now, but anything can happen, and maybe something bad will happen to me, but till then I’ll be helping those people.”

That’s a wrap: scientists come up with self-dissolving bandages

A helping hand for Poles in Ukraine