Anybody familiar with Warsaw will be familiar with the palm tree. Standing in the centre of a main intersection and now part of the city’s folk-lore, the tree is perhaps the most famous work by Joanna Rajkowska, but there is much more to the artist than just artificial foliage.

Much of Rajkowska’s work reflects one her passions: the role of art in a public space and the way in which the use of such space should be dictated by those who inhabit it and function within its environment.

This passion and interest led to the palm, the artificial tree (which still manages to confuse many a tourist) standing on the Charles de Gaulle roundabout, at the intersection of the city’s Jerozolimskie Avenue and Nowy Świat.

The idea for the 15-metre high palm came to Rajkowska after a visit to Israel with fellow artist Artur Żmijewski. Called Greetings from Jerusalem, the name of the tree project references the avenue’s name, Jerozolimskie (Jerusalem Avenue), which itself is named after an 18th-century Jewish settlement called New Jerusalem that once lay on the city’s borders.

On one level the tree stands as a symbol of the influence the Jewish community has had on the city throughout history. But it also stands as a clever symbol relating to modern immigration and multi-culturalism by introducing something new, which is not native to the city, yet can be integrated and accepted into society.

Reactions to the piece over the years have been mixed, and have shown an intolerance for the new from some sectors of the community. Although Rajkowska met with strong opposition from the local authorities and had problems in gaining official approval, she overcame all those obstacles and the palm was installed in December 2002. 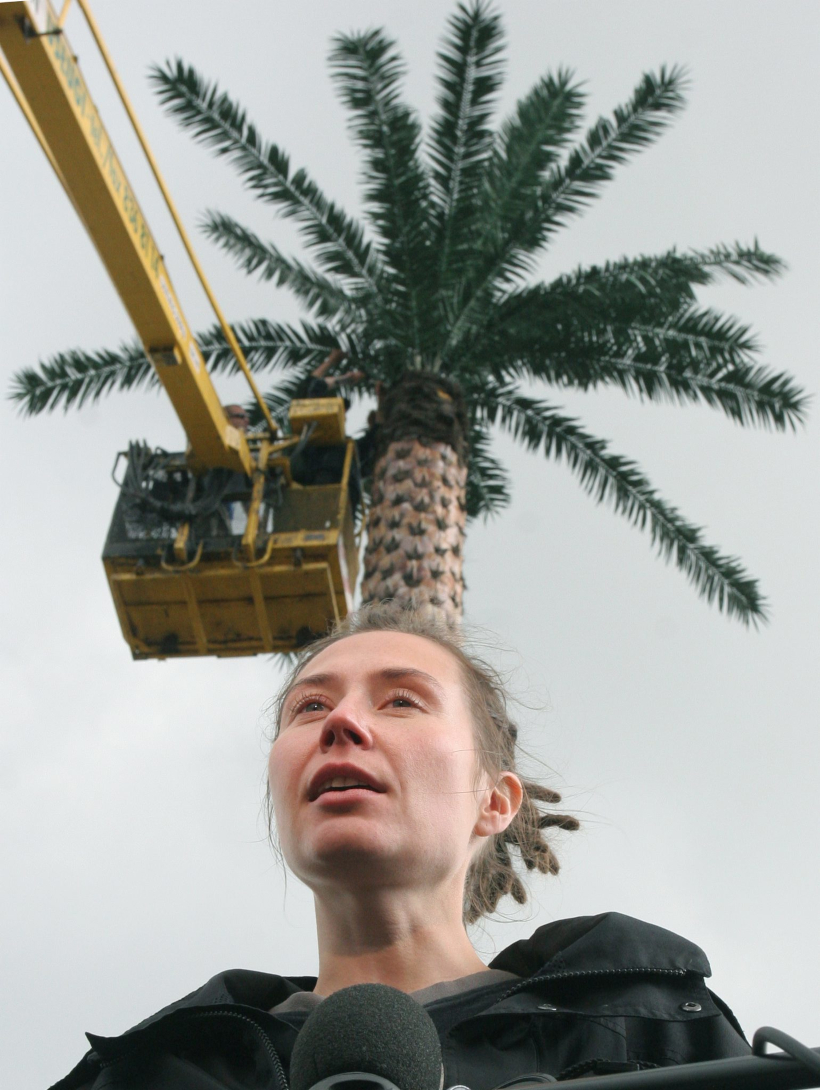 The palm tree is perhaps the most famous work by Joanna Rajkowska.Radek Pietruszka/PAP

Initially constructed as a temporary installation, the palm tree has weathered the storms, be they meteorological, political and public, and remains a much loved, and sometimes hated, symbol of the city. In 2003 a poll showed that 75% of Varsovians wanted the palm tree to remain, and so it has for the past 16 years. In 2015 the tree underwent a major refurbishment.

Away from the public space another of Rajkowska’s main interests is how humans interact with each other, either in a direct manner or through subliminal connections. Rajkowska appears to see that even without physical contact we can have intimate and close connections.

In 2001, at Warsaw’s Galeria XXI, she organised the Dream Diary project. Over a period of six days, random groups of young people were asked to sleep in the gallery and write down their dreams. The work commented on alienation in society, yet at the same time the strangers shared a strong connection through the intimate act of sleeping and the highly personal process of sharing their dreams.

Another project which highlighted intimacy between humans in an unusual and controversial way was 2000’s Satisfaction Guaranteed series. Rajkowska produced a series of usable products, such as soap, perfume, drinks and skin creams.

The products were produced under the brand name of Satisfaction Guaranteed and advertised in supermarket style promotional leaflets. What made the work difficult was the fact that each product in the range was manufactured by using secretions from the artist’s own body.

The fizzy drinks flavours selection was made up of DNA, grey brain matter, mammary gland extract, vaginal mucus, cornea and endorphins, all of which had been collected from the artist's body.

The cosmetics range was based around equally weird ingredients; the skin cream included the artist's saliva, the perfume incorporated her pheromones and the soap was produced from her own body fat.

The collection caused ripples of outrage, yet at the same time it also strangely played on concepts of intimacy, without the norm of acceptable physical contact or human interaction.