Tails From The Underground: cats & vodka in the subterranean depths of Warsaw’s Palace Of Culture

Loved by some, loathed by more, no building in Poland matches Warsaw’s Palace of Culture & Science (PKiN) for size, stories and controversy.

Completed in 1955, that the country’s tallest tower was built as a “gift from the Soviet Union” has given Poles plenty to ponder over the decades; perceived from the outset as an oppressive reminder of the Kremlin’s hegemony over Poland, and though attitudes have since softened towards it no other structure has proved ultimately as divisive. Only recently, one government minister went on record to suggest that the army’s sappers be deployed to blow it to smithereens to mark the nation’s independence – he was not joking. 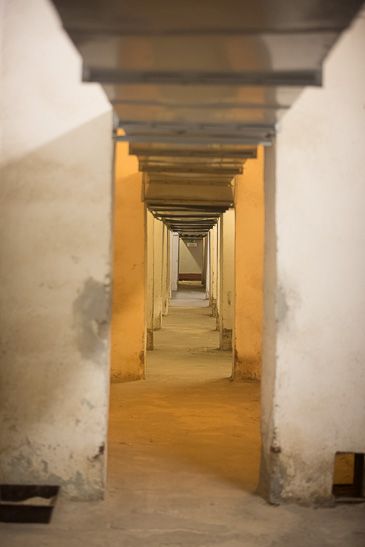 The corridors have long provided a rich source of urban legends and stories.Kalbar/TFN

But despite the lingering hostility, a growing number of people are seeing the Palace in a more positive light. “Those that hate the Palace of Culture & Science,” says Tomek, a regular at PKiN’s celebrated Bar Studio, “are the people who don’t know it. They see it for what it was, not for what it’s become. They don’t understand it.”

This being the case, there are few better ways to understand PKiN than burrowing to its core. The source of numerous urban myths, for much of the Cold War period – and beyond – rumours circulated as to the existence of an underground river, prison cells containing political prisoners, a nuclear shelter, and a top secret government train line running straight to Communist Party HQ. These, it transpires, have no basis in reality, however, other tales (or should it be tails?) do. 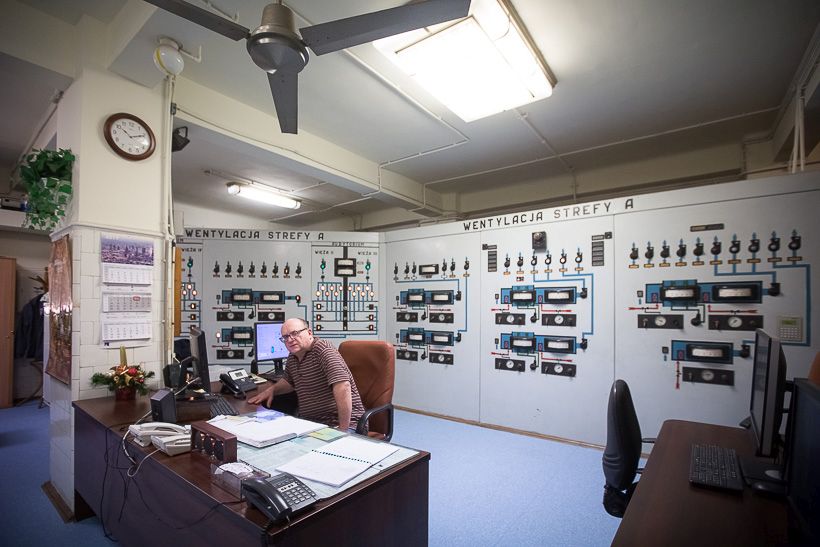 The Palace’s main control room looks much a like the lair of a Bond villain.Kalbar/TFN

For as long as the Palace has stood, stories have been told about the colony of cats kept to keep the rodents in check. Once numbering sixty, today nineteen cats in all patrol the corridors, retiring after-duty to green-lit private quarters decorated with recreational climbing obstacles and pin-up posters of posing puppies. Ostensibly employed to minimize the damage caused by gnawing mice and rats, the cats themselves have at times caused no end of trouble: in 1964, Marlena Dietrich was left fuming after her performance in PKiN’s Sala Kongresowa was interrupted when a curious stray trespassed onto stage, while in later years, another prowler by the name of Kazimierz was squarely blamed for plunging the entire building into darkness after chewing through a power cable (miraculously, he survived). 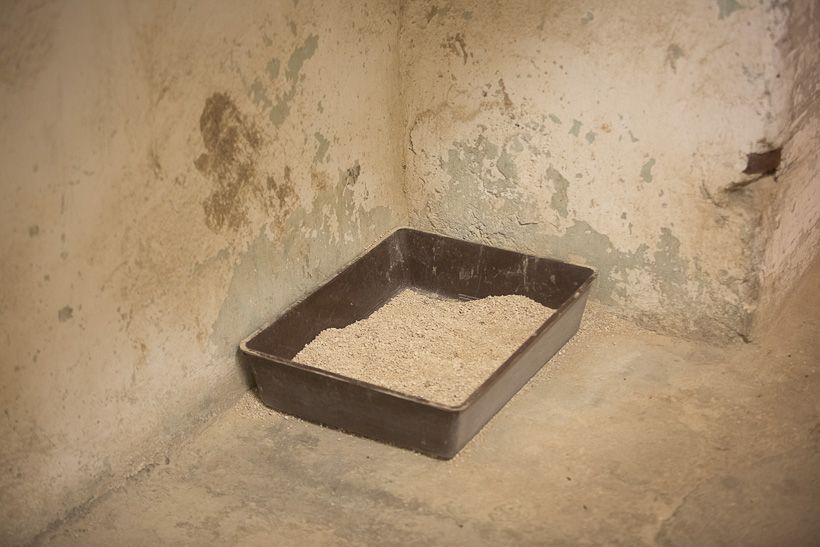 Essential convenience. Some 19 cats patrol the Palace to keep the rodents at bay.Kalbar/TFN

When underground tours of the Palace of Culture were first announced as part of the city’s Night Of The Museums in 2015, tickets sold out within three minutes flat – according to one Palace spokesman, many that couldn’t score tickets were left in tears. Sensing the public’s interest, CREATours (creatours.pl) have conducted regular trips into the guts of PKiN pretty much ever since.

For those more used to the bombastic pleasures of the Palace, the underground levels are a surreal departure from the norm. Walking down shadowy lime-coloured corridors reminiscent of The Shining, visitors duck under heavy pipework before being ushered into a control room straight from the set of an early Bond film: in here, retro furnishings are matched against giant ‘Made In The USSR’ machines festooned with enigmatic dials and mystery buttons. Visually-speaking, it’s as if one has stepped back in time to the age of the Sputnik. 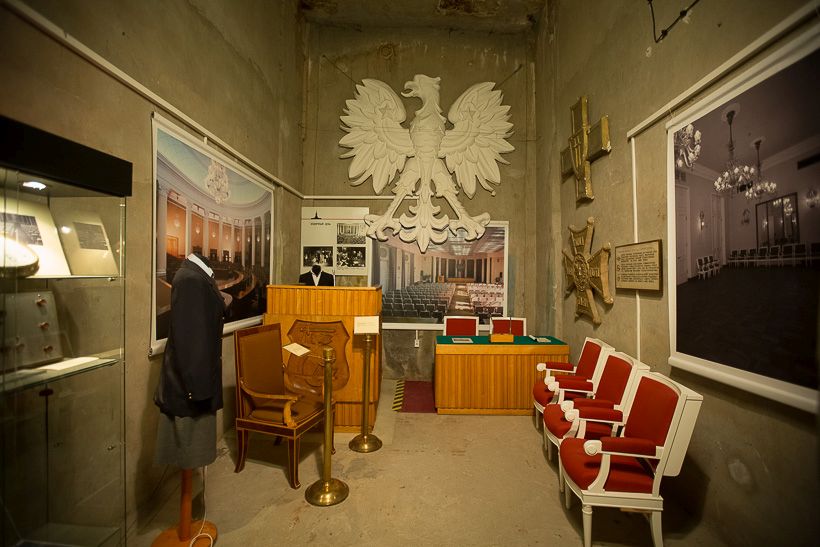 Just some of the memorabilia from the Palace’s decades of service.Kalbar/TFN

Whilst modern day computers are in evidence, the surprise is that many of the older contraptions are still in fully-functioning order and play an essential role in the Palace’s day-to-day life: from supplying heating and electricity to controlling water and sewage. Further on, a ventilation room has the clank and clatter of the engine room of the Titanic. Understood to be one of the first air-conditioning units in Poland, the durability of this tangled web of metalwork says much for the technical expertise that was invested into the Palace’s construction.

It is the level below, however, that feels like the real feather in the cap. Having peered into the aforementioned “cat room”, visitors then pass through a series of chambers that are dank and dusty and filled with mementos from PKiN’s past: an original set of revolving doors (replaced after foreign dignitaries complained they couldn’t fit their cases through), a 1956 guestbook signed by a German anti-fascist delegation, period posters (“Don’t enter the lift with wet clothes!” castigates one such work), as well as rusting tools once used by the Palace’s 3,500 Soviet builders. 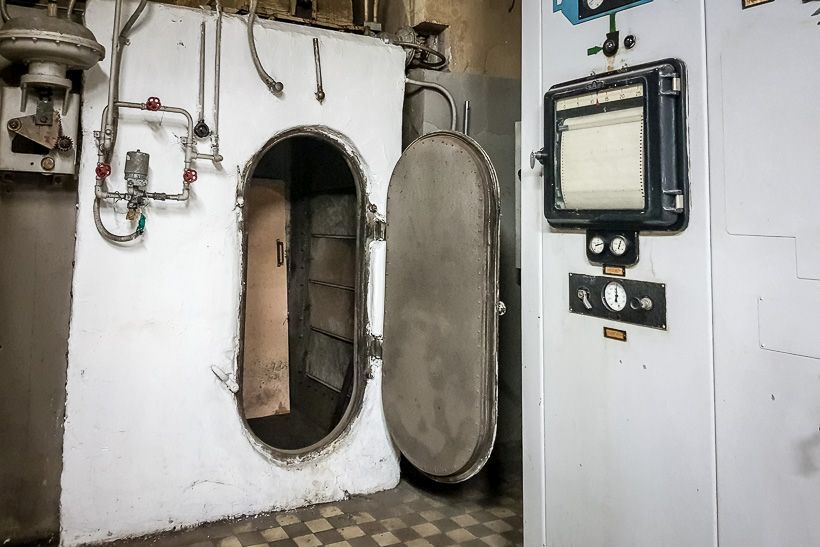 Despite appearances the Palace has never played home to a nuclear shelter.Kalbar/TFN

The charm lies in the randomness of all of these elements. One display, for instance, honours the Palace’s longest-standing employee, Hanna Szczubełek (who continues to work here since the very early days of PKiN), another, presents a bewildering heap of customized electronic equipment installed by the Theatre Lighting Division of Thorn Lighting Ltd. London. Then, a phalanx of carnation-coloured seating that once filled out the Sala Kongresowa. To touch them is to touch history: it’s on these loyal party members once sat while applauding speakers such as Brezhnev, and it’s on these that music fans went wild when the Stones rolled into town in 1968. 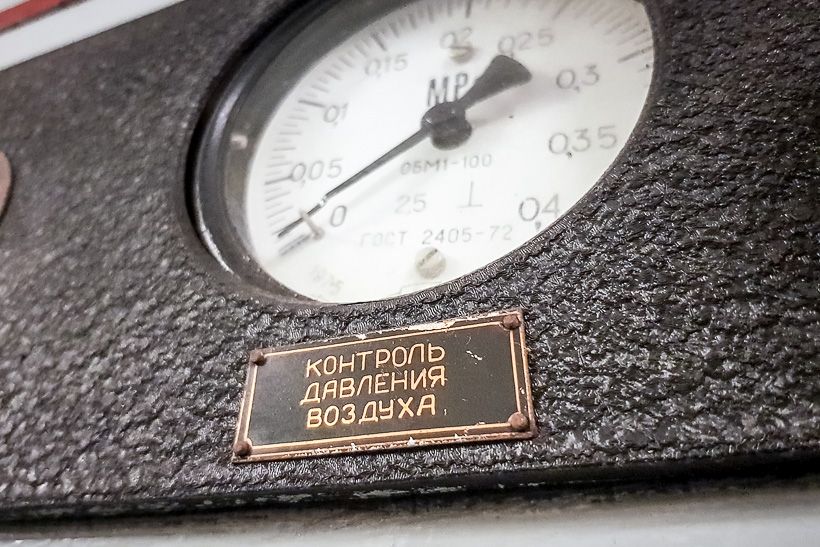 An old gauge reminds visitors just who built the Palace.Kalbar/TFN

Remembered as the most riotous music gig in Poland’s history (“It was as if a UFO had landed in our gray communist world,” recalled one music journalist), the original bad boys of rock’n’roll were rumoured to have been reimbursed for their performance with vats of Polish vodka. However, when it came to the crunch, they were forbidden from taking the booze out of the country. For years after, it’s said that that thousands of litres lay stored in these basements, with the vodka eventually finding its way back into the homes of the Palace’s employees and the domestic black market. Though likely to have been heavily embellished, and possibly even completely invented, its stories such as this that add to the mystique and the magic of the Palace’s basements.