Streets ahead: TFN explores the experimental festival that’s helped returned one of Warsaw’s great historic streets back from the dead

You would be forgiven for thinking you were actually in Berlin. On a cobbled street flanked by teetering tenements, local kids play rounds of ping pong on a table planted in the centre of the road whilst immaculately bearded men haul their fixed-gear bikes to a canvas tent functioning as an ad-hoc repair stand; ahead, an elderly woman decorated in jangling jewellery and a satin dressing gown picks through the offerings of a market stall selling vintage vinyl records.

As the rain starts to fall, the gathered crowds disperse to drink craft beer in eccentric bars filled with steps and wobbles and second-hand furnishings. When, eventually, shafts of sunlight pierce the gloom, a band files past parping into dented brass instruments. They are followed by a throng of admirers that cover all age bands. 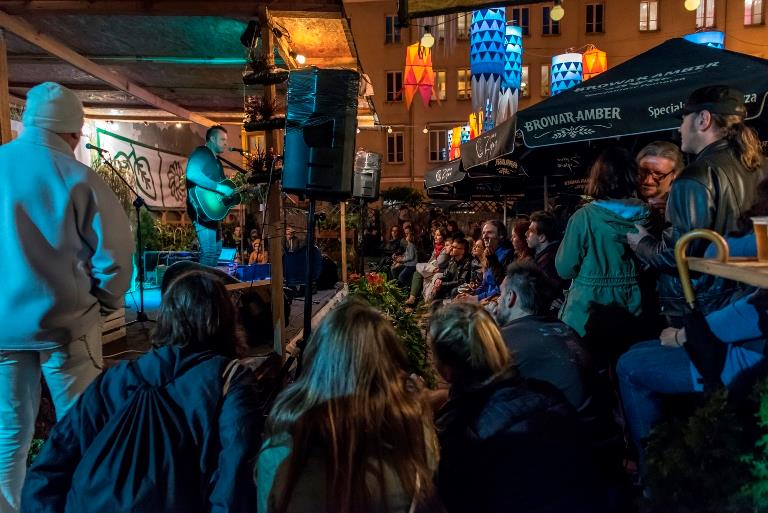 But by no means is any of this particularly odd – at least, not when you consider that past interludes have been supplied via Europe’s oldest DJ, “mannequin marches”, dog parades, outbreaks of street yoga and molecular cooking workshops. If there is a surprise, it’s the location itself: you are not tagging yourself in Kreuzberg, rather ulica Ząbkowska in Warsaw’s Praga district.

Not many neighbourhoods in Poland better illustrate the country’s transformation than Praga; though it escaped the outright devastation wrought on Warsaw’s left side during WWII, a post-war plan to repopulate the area with out-of-towners and rougher elements backfired spectacularly. Derided as the more rugged end of town, its stock fell further with the political changes of 1989. What had traditionally been regarded as a blue collar suburb found itself tarred with a not entirely unjustified reputation as an area that operated to its own rules and regulations – a place where even foreign guidebooks warned “Do Not Enter”. 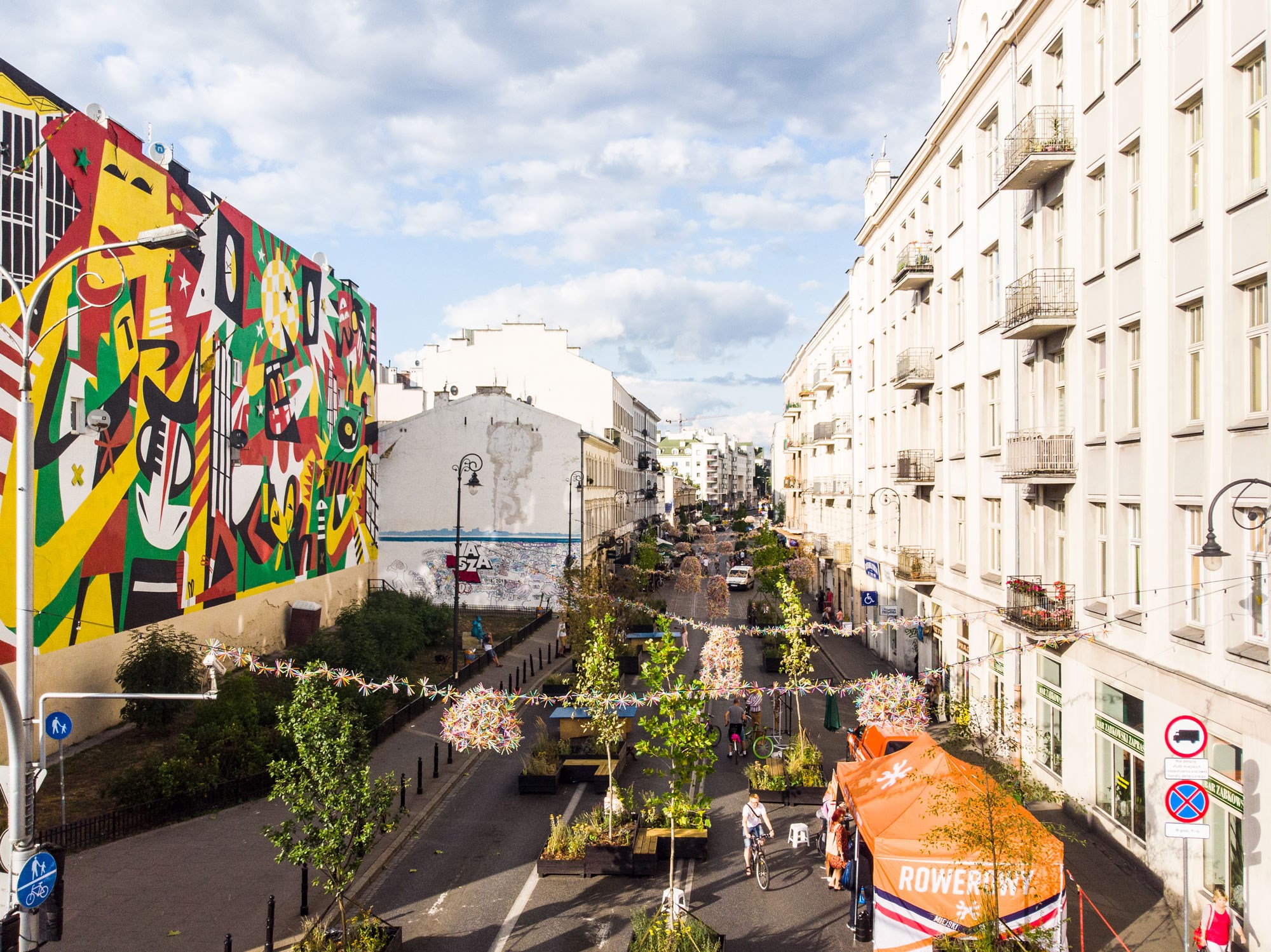 Hope, however, came with the new millennium. Attracted by low rents and a steady program of regeneration, a wave of artsy minded settlers made the migration across the river, sparking a cultural renaissance in the process. Of these, Praga-raised Krzysztof Kudelski made the “easy decision” to return to his roots and launch the acclaimed 81 Stopni gallery and creative space.

“There was a lot going on in those days,” he recalls, “but then, round about 2014, the local authorities changed their view on culture – instead of jazz performances and other such events, they started organizing mainstream pop concerts and Disco Polo nights. Those of us that had been attracted to Praga by its ‘sense of alternative’ felt cheated.” 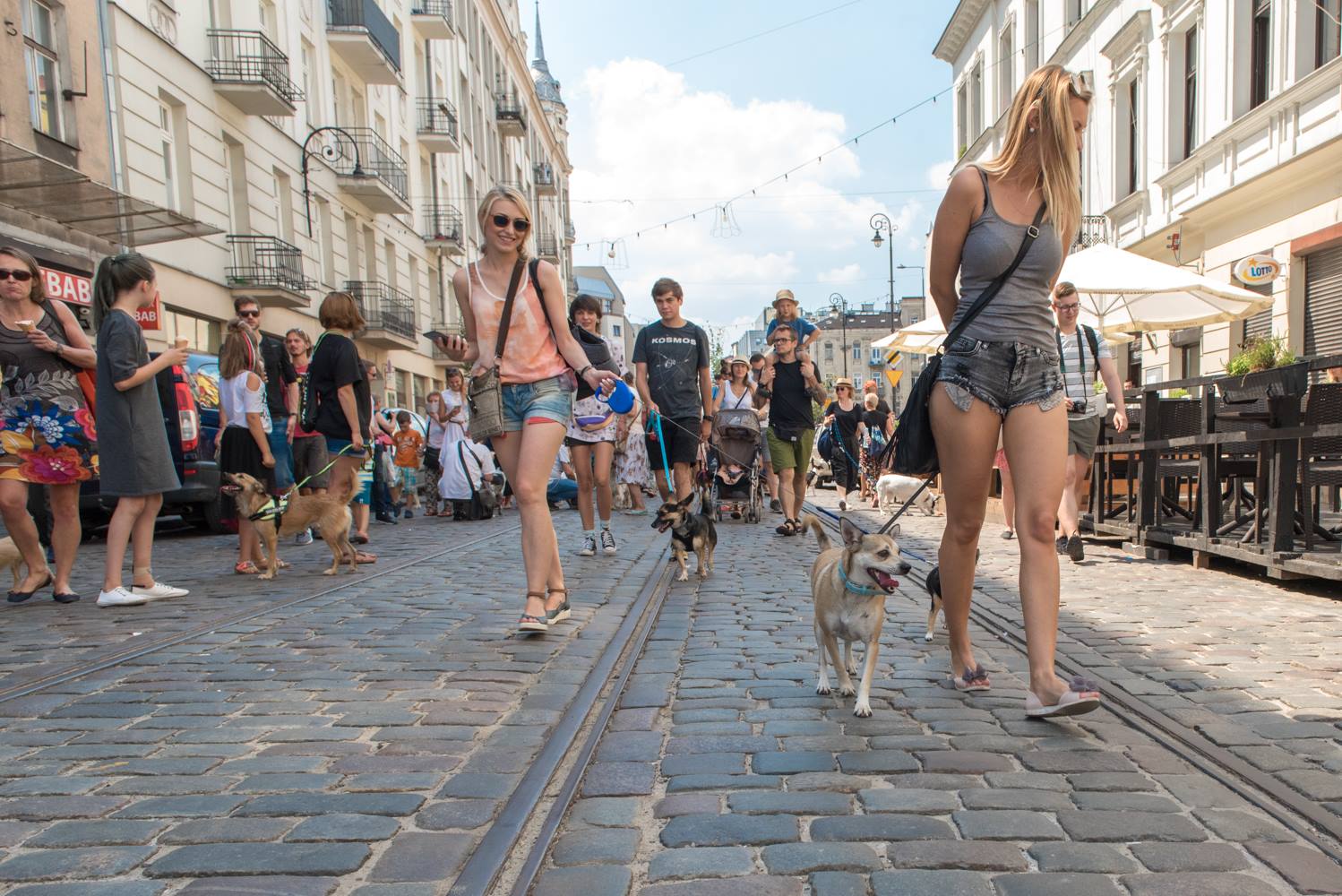 It’s dog’s life. Some hounds enjoy their time in the festival’s spotlight.Otwarta Ząbkowska/Facebook

Thus Otwarta Ząbkowska was born. Banding together with Paulina Dmitruk, Klaudia Jaworska, Bartosz Świętek, Tomek Kaliński and Andrzej Iwulski, the six set out to “do something different” by creating a summertime open-air festival that sought to spotlight literature, music, film, art, theatre and food. “We’d heard that Warsaw City Hall was thinking of closing off a section of ul. Ząbkowska for summer weekends,” says Krzysztof, “so we figured we could find common ground.”

Making its debut in 2015, Otwarta Ząbkowska became the sensation of the summer, captivating the public through the diversity of its events.

“Sure, we’ve made mistakes along the way, but it’s all about learning,” says Krzysztof. “That first year was particularly wild – we organized a hip-hop battle but didn’t realize it would coincide with people returning from church; we ended up having loads of churchgoers walking past hip-hop artists whose lyrics perhaps weren’t best suited to the moment.”

Even so, from the start it was clear that this was an initiative that the locals embraced. “We ended up printing a heap of apology letters that we personally delivered to residents,” remembers Krzysztof, “and that action was really well received – in fact, some people even told us not to worry, and that they’d heard all those kind of rude words before!”

Still, it was a point that the organizers took on board, and subsequent festivals have seen a strategic retreat from overly loud performances. “People love the concerts we put on, but we’ve realized good concerts don’t have to be noisy,” says Krzysztof. This has not been lost on the neighbours. “We’ve conducted studies,” he continues, “and the street is actually louder during the week with the cars going up and down the cobbles than it is when the festival takes place at weekends – in fact, one guy even thanked us once saying that after living on Ząbkowska for 40 years, it was only when the festival first began that he was finally able to hear the birds sing.” 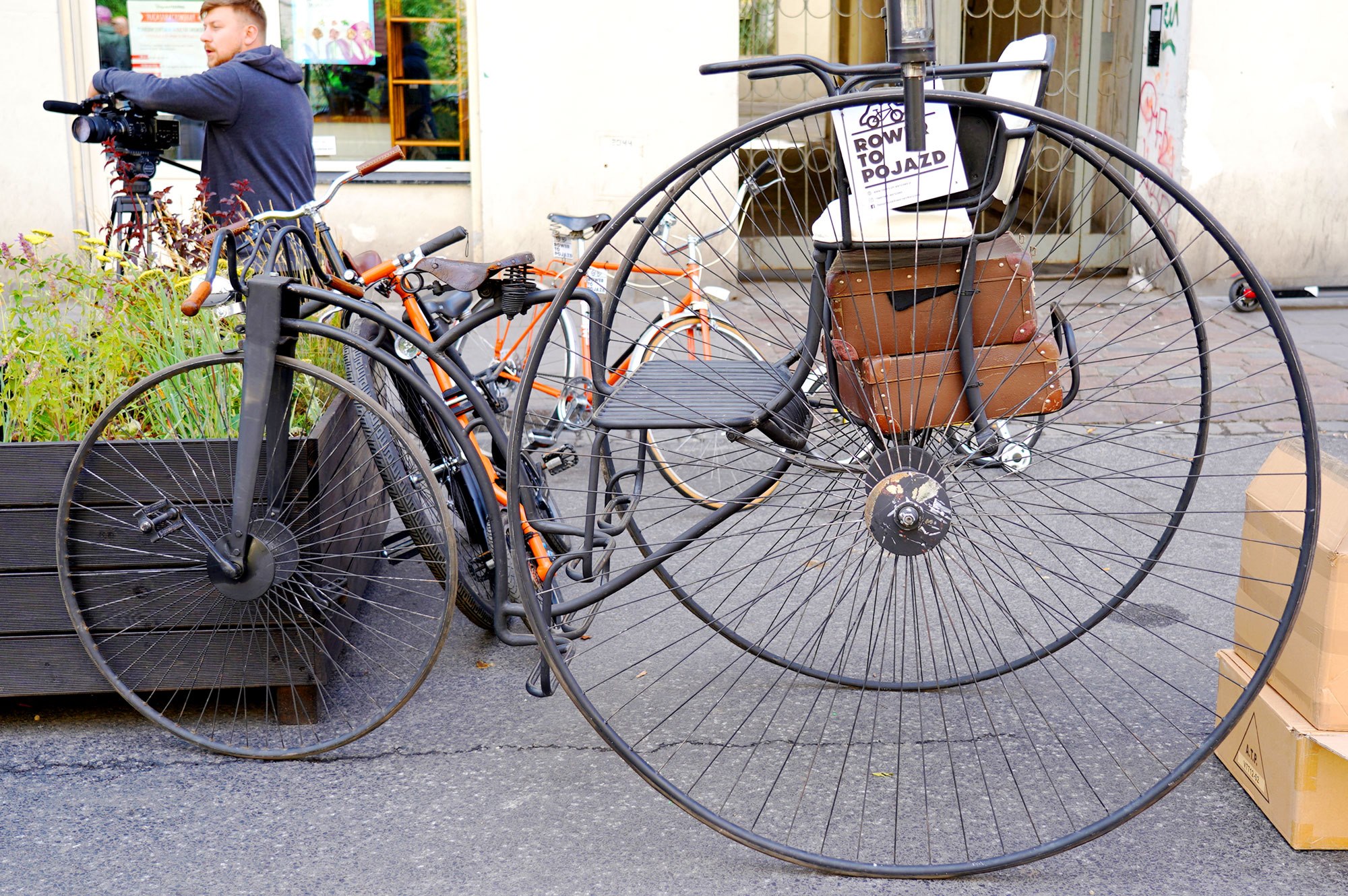 It has also tried to encourage the eccentric and the alternative.Otwarta Ząbkowska/Facebook

However, not everyone has been pleased. According to Krzysztof, too often politicians have targeted Otwarta Ząbkowska to score easy points. “One, for example, complained that some tramps had been found sleeping on the benches after one festival. Guess what, I told him, we haven’t bussed them in ourselves: we’re not to blame for the vagrants in Praga.”

More recently, an art installation depicting the Virgin Mary wearing a black robe has left conservatives in uproar. “Speak to the artist behind it though,” says Krzysztof, “and you’ll find out that it’s a statement about the number of old historic buildings in the area that have fallen victim to mysterious fires.”

Other artistic installations have proved less controversial, and the decision to decorate the street with hanging lanterns made from over 150,000 salvaged plastic straws has won plaudits for its zero waste message. 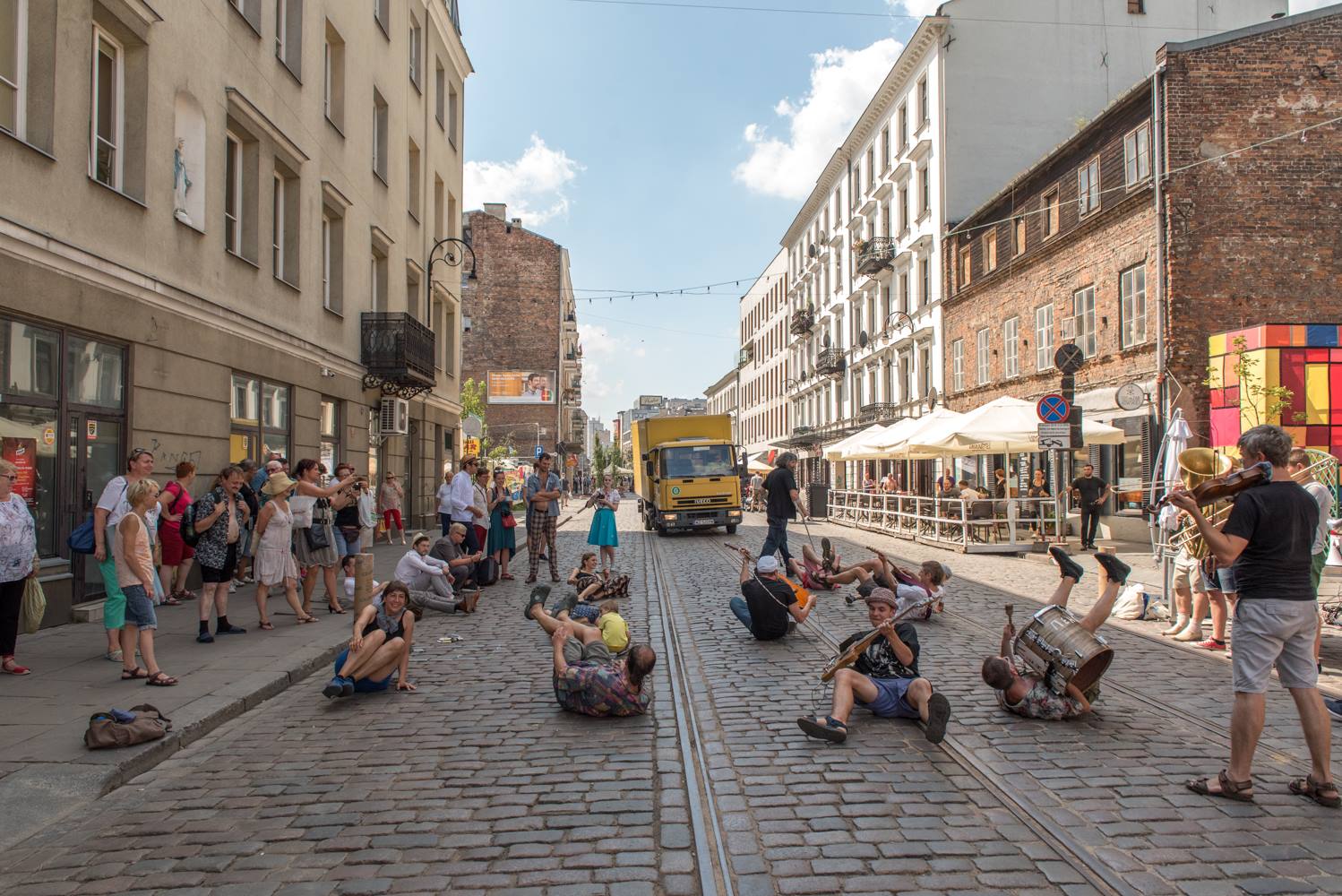 “Sure, we’ve made mistakes along the way, but it’s all about learning,” says Krzysztof.Otwarta Ząbkowska/Facebook

Colourful, energetic and audaciously eccentric, the festival has come to channel the very essence of Praga, simultaneously stitching the community together whilst serving as an engaging gateway to the area for newcomers. “We’ve always reminded people wanting to participate,” says Krzysztof, “to remember that this is a festival for everyone.” In doing so, Otwarta Ząbowska have fostered a unique vibe that is diverse, inclusive and not short on surprises.

Saliently, it has become an expressive calling card for the district and a proud rallying point for an area that has often suffered from negative PR. Once rugged, ruffled and something of a no-go zone (“You wouldn’t want to go there alone in the old days,” laughs Krzysztof), the street’s metamorphosis has been accelerated yet further with last year’s unveiling of the post-industrial Koneser complex. But, at the heart of all this progress, few initiatives have done more to light Praga’s candle than Otwarta Ząbkowska.