Stirring it up: Warsaw artist mixes words with images to get his message across

Paweł Susid has never been afraid to defy convention. By mixing text with pictures he has blended the power of the word with the power of the image to create striking works of art that have set him apart from his peers.

His success has been built upon a specific style that had made his work instantly recognisable in the world of Polish art. The Warsaw-born artist uses stencilled statements and concise texts incorporated around geometric, yet recognizable, symbolic images to make witty comments and perceptive observations about everyday realities, politics and history.

The texts in Susid’s paintings range from being straight-forward in meaning to short, abstract and humorous philosophical musings by the artist, but he has also not shied away from subjects dear to the hearts of many Poles.

His 1999 painting “Takie domy zostały już zbudowane,” (Such houses have already been built) portrays three buildings against a sky-blue background, the structures are stripped back to their simplest forms, yet it is obvious that they represent churches. On the right hand side of the long and narrow painting the title is stencilled in his signature, large, package-crate style font. 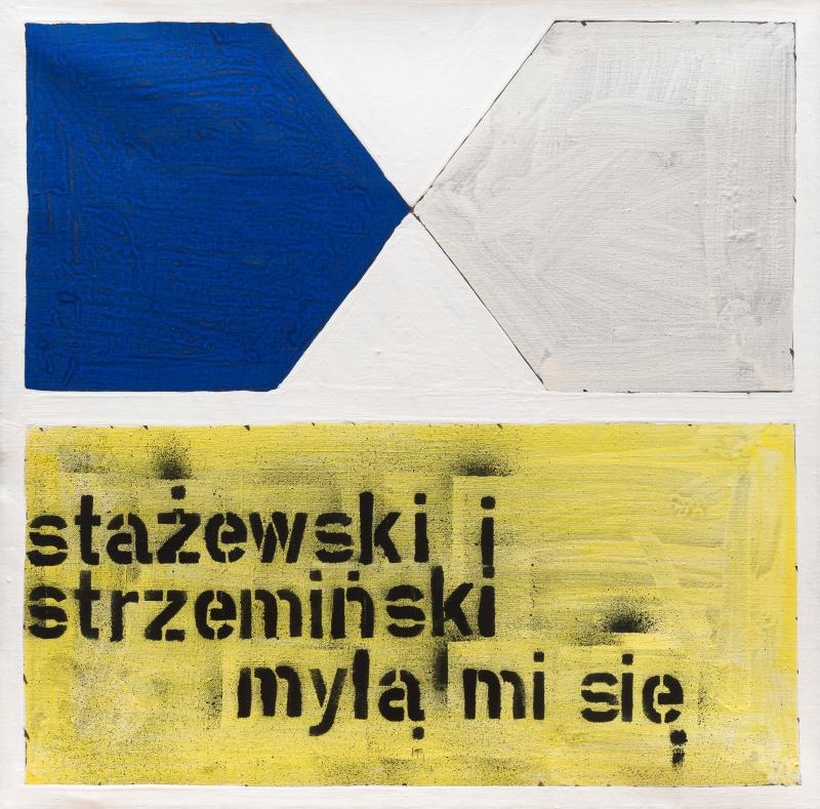 Unmistakable style. Susid uses a blend of words and imagery to get a sometimes pointed message across.Creative Commons 3.0

The piece works as a witty comment on the late 1990’s Polish obsession with the construction of new churches. “Such houses”, refers to the house of God, rather than the necessity of constructing new and affordable housing for the local population.

His “Project stołu dla 4 osób, 1985” (Project for a table for 4 people, 1985) also struck out at religion by reinterpreting the symbol of the cross. Susid has said that the symbol of the cross not only represents 2,000 years of Christianity and Poland’s Catholicism, but also centuries of abuse of the symbol by church autocrats and others, leading to wars and the murder of thousands of people.

Susid sees his table project – in the form of an equilateral cross – as a functional table, where an average family can eat at and share peaceful times together. The fact that his cross is also black, makes an obvious art history reference to Russian supremacist painter, Kasimir Malevich’s Black Cross of 1923.

Susid had begun adding text, with the aid of industrial style stencils, to his paintings way back in the 70s and 80s, inspired by the work of the neo-expressionists, who were seen at the time as a reaction to the slick, clean lines and formal structures of pop art and minimalism of the 1960’s and 1970’s. 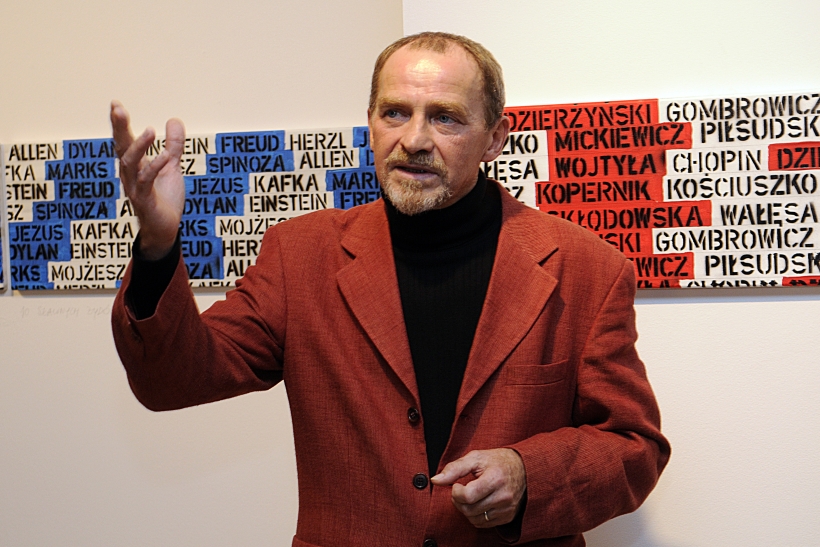 Not afraid to pull punches the artist has used his art to criticise religion and the Catholic Church.Andrzej Rybczyński/PAP

The result was to create an interesting juxtaposition of very different approaches on one canvas, or on large sheets of paper. In places the stencilled text would often be poorly executed, bleed into the paint, or even be illegible. All this helped to unify the two variable techniques into one work.

Towards the mid-1980’s Susid, inspired by his use of stencils, began to drift away from the neo-expressionist style and started to explore the simplifying of form through typography, symbols, geometry and using forms and shapes relating to art of the earlier 20th century.

His unique approach to art has brought in the prizes.

He was twice nominated for the Paszport Polityki award (in 2000 and 2006), an important award presented by Polityka magazine, and in 2011 he won the Cybis Award, an award presented by the Warsaw Association of Polish Artists and Designers (ZPAP) in memory of the painter Jan Cybis, who reformed ZPAP after WWII.

But although Susid is highly regarded in Poland, and for anyone with an interest in Poland and with a knowledge of the language, it is probably fair to say that his witty commentary and use of symbols, which are often specific to Poland itself, make his work less universal and international than many other contemporary Polish artists.

On the other hand, Susid is an artist who has carved himself a specific niche in the nation’s culture. His work and his abstractly odd and funny short text based works place him on a par with artists such as the American post-conceptual artist Christopher Wool.