A Star Wars fan has won the right to name his son Yoda following a duel with linguists.

Journalist Wojciech Staszewski wanted to change the name of his four-year-old son to that of the fictional Jedi master but came up against opposition from the registry office in Warsaw.

They sent his request to officials from the Polish Language Council, whose job it is to “provide valuations and assessments on all matters concerning the use of the Polish language in public communication”.

The Council argued that because of the fictional character's green skin and short height, the boy should instead be given a more ‘appropriate’ name.

Staszewski responded by pointing out that decisions based on skin colour was discrimination.

Posting on social media, he said: “There was a decisive clash with the opinion of the Polish Language Council that Yoda is, among others, a green-skinned creature measuring around 130 cm. 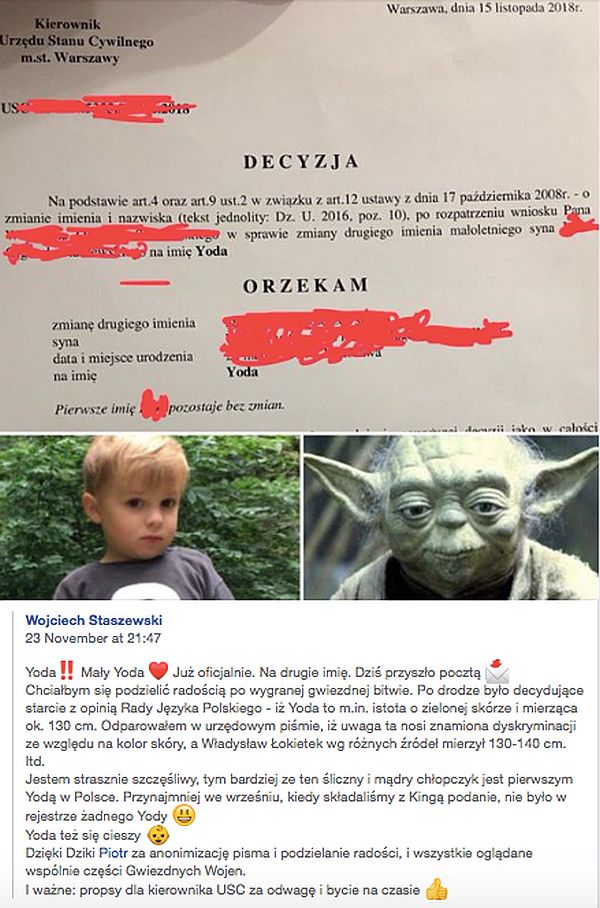 The happy dad won his battle after arguing that rejecting the name because of the fictional character’s skin colour was discriminatory.Wojciech Staszewski/Facebook

“I explained in an official letter that this commentary is characterized by discriminations due to the colour of the skin.”

The matter was finally resolved after being returned to the registry office who concluded that because it was the boy’s Christian name that was being changed it would be acceptable.

Barbara Romocka-Tyfel, deputy-director of the Civil Registry Office told local media: “The law does not prohibit the assignment of foreign names in Poland.

“If it were the first name, my opinion would probably be negative, but it is the second name and the first left no doubt about the child's gender, and the parents of the child adequately argued the choice - my opinion was positive.”

“I am very happy, especially since this lovely and wise boy is the first Yoda in Poland.”