Even in an industry prone to hyperbole and exaggeration, there are few that would dispute Wojciech Amaro’s status as the founding father of modern Polish cuisine.

Launched in 2011, his eponymous restaurant, Atelier Amaro, revolutionized the country’s dining scene through its bold marriage of nature and science; ground breaking in both concept and execution, it was no surprise when the nation’s first Michelin star followed in 2013.

More of a bombshell, however, was the decision to uproot from this home earlier in the year, thereby willingly surrendering that coveted star.

“We’ve got to start from scratch and win it all over again,” shrugs Amaro matter-of-factly, “but the truth is, I felt like I had no choice.”

Constrained by the physical limitations of his original restaurant, the launch of a new, customized venue that would enable the chef to further his ambitions outweighed the importance attached to a star. 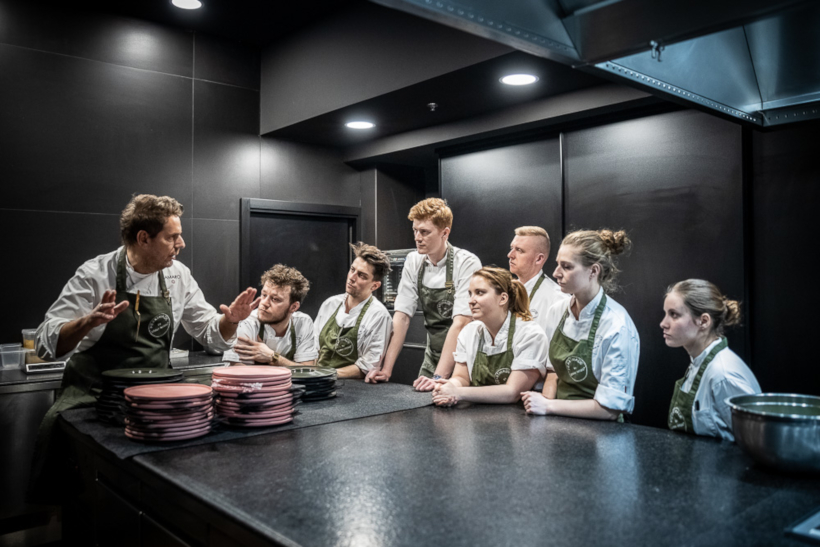 A new generation of Poles have seized the moment. 'We dream big. We don’t strive to reach the same standard as the rest of the world,' says Amaro, 'we strive for something higher.'Kalbar/TFN

“I applied to the authorities to extensively renovate the former restaurant,” he says, “but when, after eight months, I eventually received a ‘no’, I realized it was time for us to move. It was the final straw.”

Opened for little over a month, the new address, squirreled down an unexpected nook on Warsaw’s Pl. Trzech Krzyży, has met all the criteria set out by the chef.

“There’s some dishes that demand to be served by the chef,” says Amaro. “There were times previously I found myself throwing ideas into the bin because I realized we couldn’t present them in the way that we wanted; we desperately needed a kitchen on the same level as the diners so chefs could be more involved in the service, present certain dishes themselves and share their know-how with the guests – with the new place, we can finally do that.”

Daring as the move has been, the missing star has not been to the detriment of Amaro’s standing. 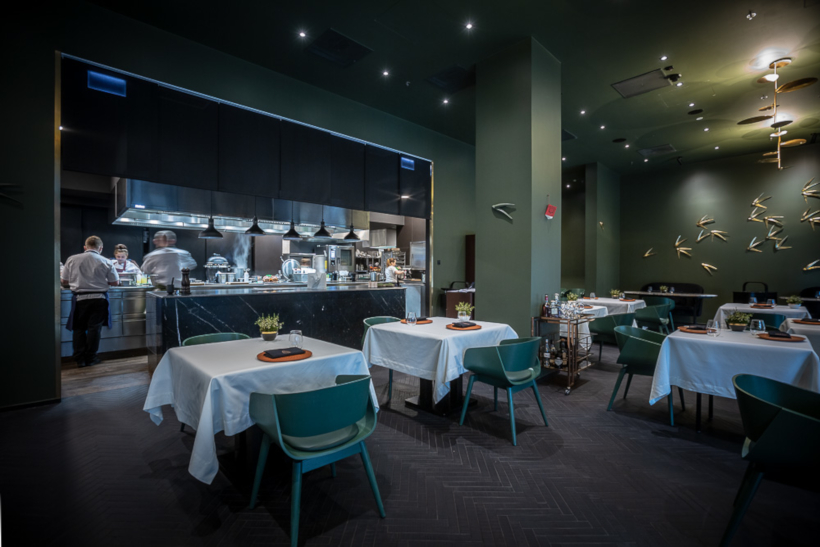 Opened for little over a month, the new address, squirreled down an unexpected nook on Warsaw’s Pl. Trzech Krzyży, has met all the criteria set out by the chef. Kalbar/TFN

In the first few weeks alone visitors have included Massimo Bottura, the chef patron of Osteria Francescana, a three-star restaurant ranked No. 1 in the world, as well as Alain Passard of the eighth ranked L’Arpège.

More big names are to follow. “Written down in pencil,” confesses Amaro, “I’ve got a list of all the chefs I want to invite in the future.”

“The first place was just a small restaurant in a park,” he continues, “but it exceeded all of my expectations; it opened doors and earned me global recognition among my peers. Thanks to that, I’ve been able to meet most of those big guns from the Top 50 and cook alongside them.

“You can’t put a price on experiences like that. There’s so much that these people know that you increase your knowledge thirty times over – that’s helped me reach the next level.”

Now, with his hit list of prospective guests in place, Amaro hopes to introduce some of the planet’s top names to the new wave of Polish food. 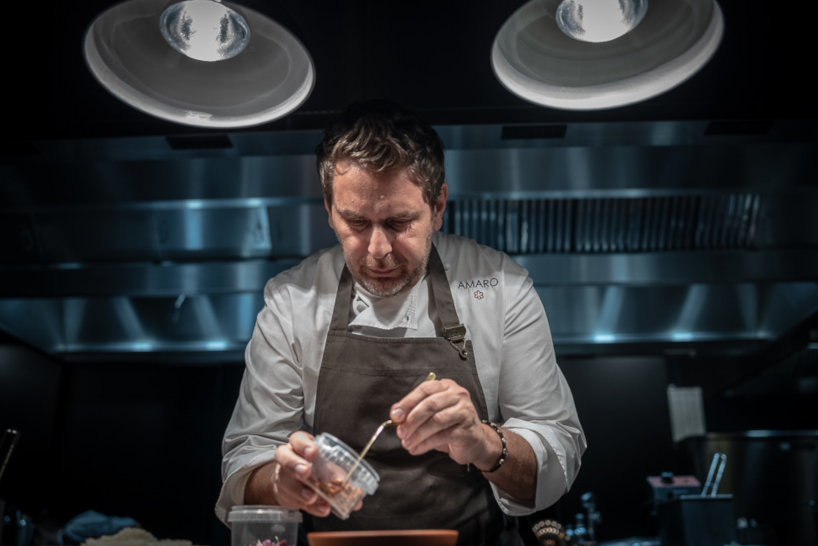 'There’s some dishes that demand to be served by the chef,' says Amaro.Kalbar/TFN

It’s not just outsiders that have been taken aback by the rapid velocity of Poland’s culinary trajectory and Amaro himself is quick to pay tribute to the changes that have occurred.

“When we opened in 2011 there wasn’t a single Polish wine that we served,” he recalls. “Now there’s 50 or so very good labels in this country and 15 on my list.

“And if that’s how fast we’ve evolved over the last eight years, think what the next eight will hold! Food-wise, I’m sure that will mean more Michelin restaurants and even more hidden gems.”

Driving this, he says, is a new generation of Poles that have seized the moment. “We dream big. We don’t strive to reach the same standard as the rest of the world,” he states, “we strive for something higher.”

Could decades of being perceived as one of Europe’s poorer countries have helped foster this burning desire? “Possibly,” he answers, “when we came out of the communist blackout we had a hunger to do things better than others and that’s a great quality to have, especially in gastronomy.” 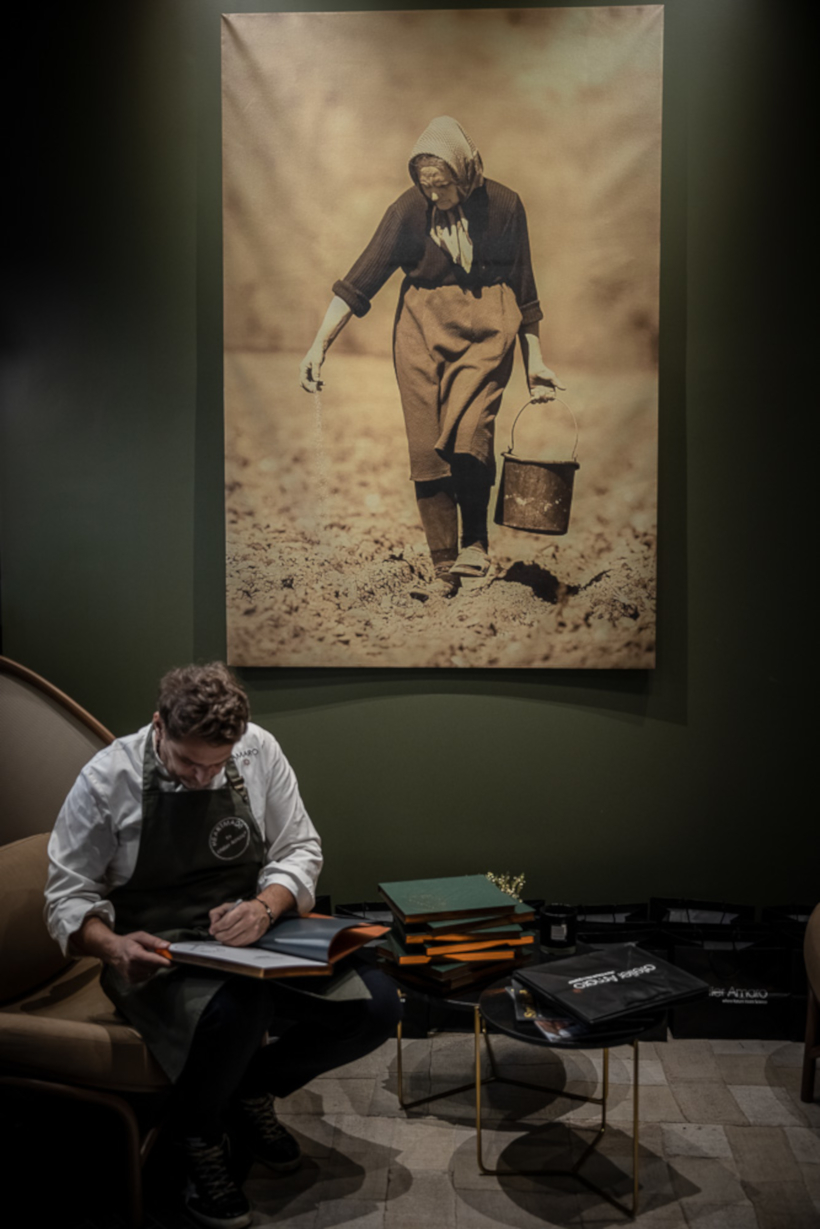 It was in the Polish countryside that Amaro’s ambitions crystallized and an influence that remains strong today. 'It was time of discovery: eating carrots washed under a hand pump; or going fishing with my brother then cooking what we had caught within twenty minutes.'Kalbar/TFN

Visibly enthusiastic about the path the country is on, he is certain the future is bright. “Maybe this isn’t the time for Poland, but it’s definitely coming,” he says. “In fact, I’m sure that right now there are Polish chefs that we’ve never heard of working in some of Europe’s big kitchens, watching and learning.

“One day, they’ll return here and take our cuisine another step further. I’m excited for them. I want this country to carry on going forward and these are the people that will help achieve that.”

But patience, he warns these aspiring talents, is key. “I think it’s the biggest quality you can have as a chef. With failure comes experience. You need to evaluate your mistakes and then learn from them.

“Just one millimeter of progress each day will, in the end, amount to something larger.”

“It’s this culture of learning that he is keen to impart on his subjects in the kitchen. “I’m fully with the team. Our style is creative here, so I need to find ways to unlock the creativity in my chefs,” he points out, “it’s definitely not about building a structure around Amaro the hero.”

Arrogance, he adds, is one of the grenades that chefs should learn to handle with care. “Just because you’ve got a great CV and have worked in all of these top kitchens, that doesn’t automatically make you an amazing chef – no way. If that was the case, there’d be a million brilliant chefs. Instead, many go over-the-top trying to impress or over-doing their cooking in a way that’s not called for. To go to the top, you need to learn to listen.” 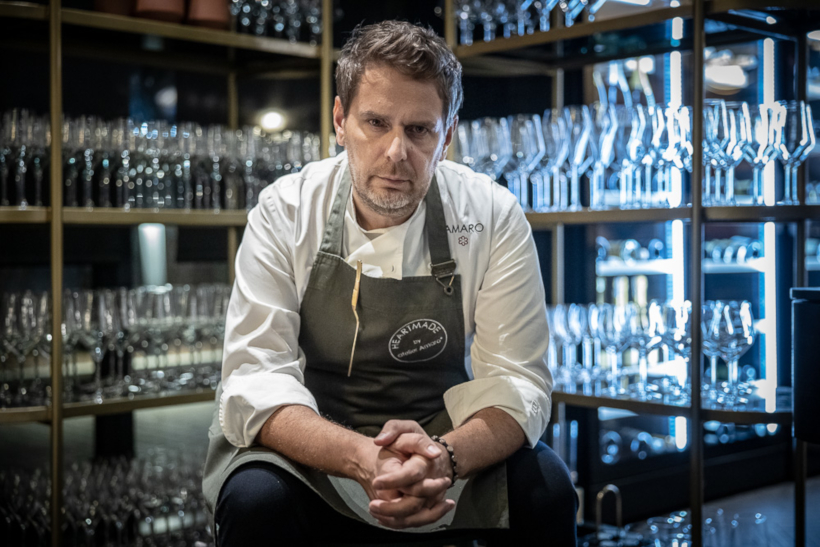 'Just because you’ve got a great CV and have worked in all of these top kitchens, that doesn’t automatically make you an amazing chef – no way. If that was the case, there’d be a million brilliant chefs.'Kalbar/TFN

Quietly confident that, given time, his restaurant has the qualities and consistency to earn two stars, Amaro lays to rest the notion that Michelin glory is a personal crusade. “Of course it’s something that’s on the mind,” he says, “but it’s not a major focus.

“Speaking personally, what excites me the most is the ongoing development of our own farm. The bottom line is that you can’t cook good food without good ingredients, and by having this farm we gain total control of the ingredients we serve.”

Set a short distance from Warsaw, this farm has become an all-consuming project of passion. “Did you know, for instance, that there’s 42 types of cauliflower – having this farm gives us the flexibility to go deeper and try all these varieties and pick the very best.

“I’ve had proposals to do things in London, New York and Dubai, but I’ve turned them all down. Atelier Amaro is personal. It’s a philosophy. I don’t have ambitions to grow or to multiply, my ambitions are all connected with this farm.

“And you know what I find really inspiring, is that this isn’t a project that will ever have an ‘end’. I love that. I want a challenge where the result isn’t a foregone conclusion.” 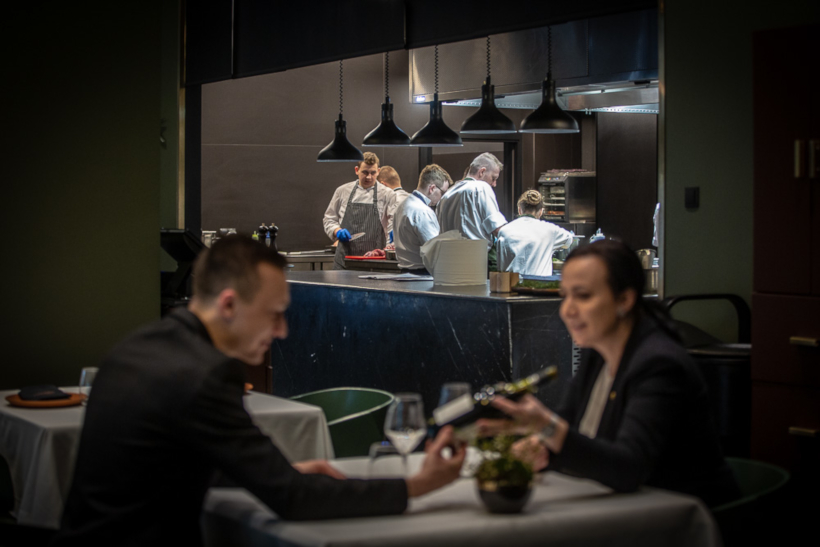 'When we opened in 2011 there wasn’t a single Polish wine that we served,' Amaro recalls. 'Now there’s 50 or so very good labels in this country and 15 on my list.'Kalbar/TFN

In many ways, at least on a subconscious level, the farm closes a circle that goes back to youth. Having began cooking at the age of three (“a sponge cake,” he smiles, “my six-year-old sister had to turn on the oven!”), from an early age he knew cooking was his calling. “To me,” he recalls, “it was in the kitchen that I felt most at ease – it was a place of impulse; a place where there was always something going on.”

Fond as the memory is, it was in the Polish countryside that his ambitions crystallized.

“As a family we’d traditionally spend a couple of months each year in the countryside by Leszno,” he says.

“It was time of discovery: eating carrots washed under a hand pump; or going fishing with my brother then cooking what we had caught within twenty minutes.

“There was a real purity to it all and it was at that point I started really using my brain to record all those sensations.”

Turning back the clock, it is the replication of those very sensations that have carried Poland’s most celebrated chef to the peak on which he stands.