Staged battle: Miracle on the Vistula re-enacted in theatrical spectacle

The pitch at the PGE Narodowy stadium in Warsaw turned into a huge battlefield on the night of August 15. Instead of Ronaldo and Lewandowski, it was Piłsudski and Leon Trotski who faced each other at the national stadium as Poles celebrated the historic victory over Bolshevik Russia in 1920.

To mark the one hundredth anniversary of what has become known as the Miracle on the Vistula, the operator of the national stadium put on the spectacle ‘1920. Grateful to Heroes’ to tell the story of the battle in a multimedia historical re-enactment extravaganza. 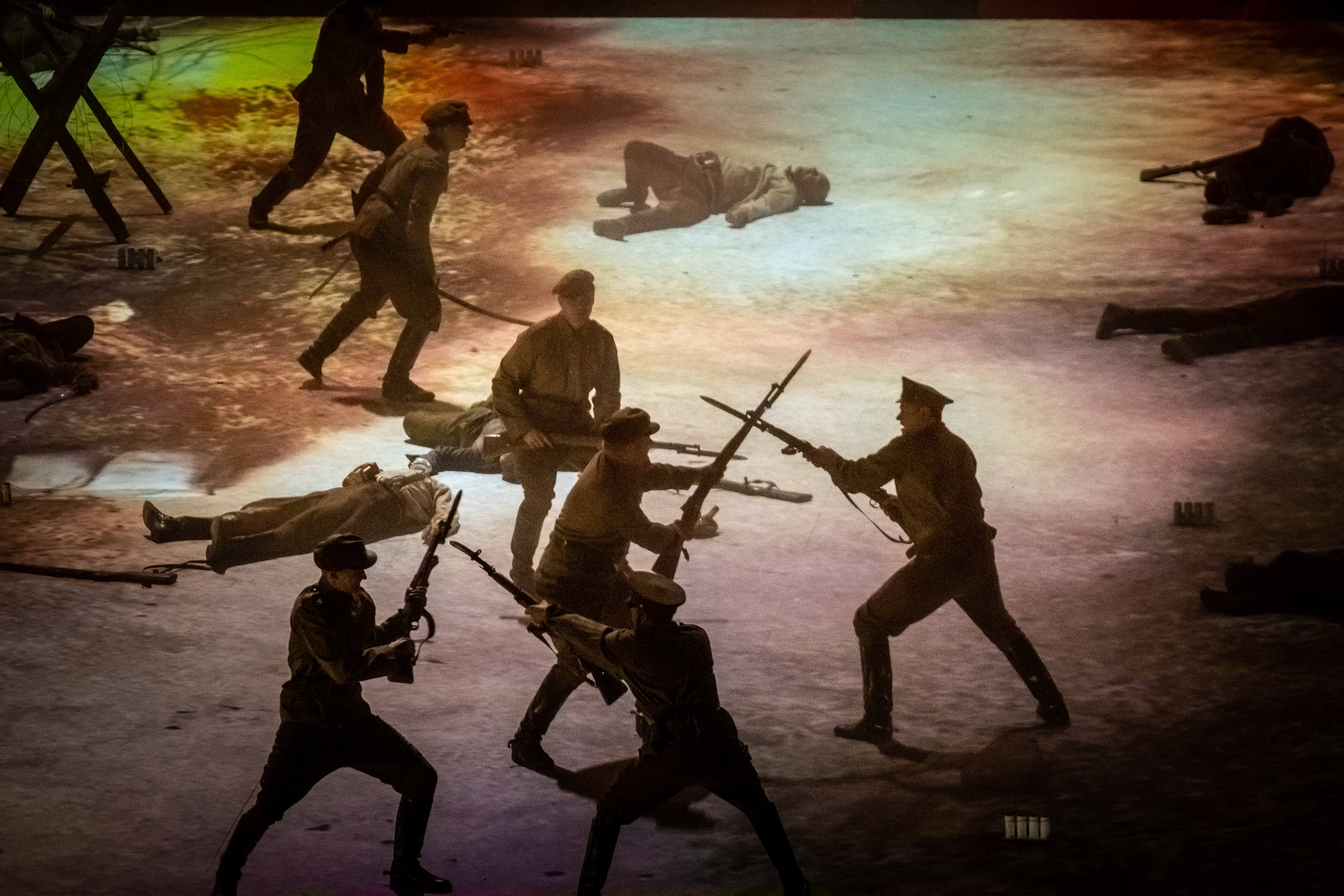 The stadium’s pitch was turned into a huge battlefield, with trenches of the two opposing armies facing each other.Kalbar/TFN

While much of Poland’s remembrance of its past is focused on honourable defeats and heroic but ultimately doomed last stands, the Polish victory over the Bolsheviks is an occasion when Poles can take unadulterated pride in an indisputable success.

The victory certainly saved the infant Polish state from a stillbirth. It also possibly saved vast stretches of Europe from becoming infected by the scourge of communism. 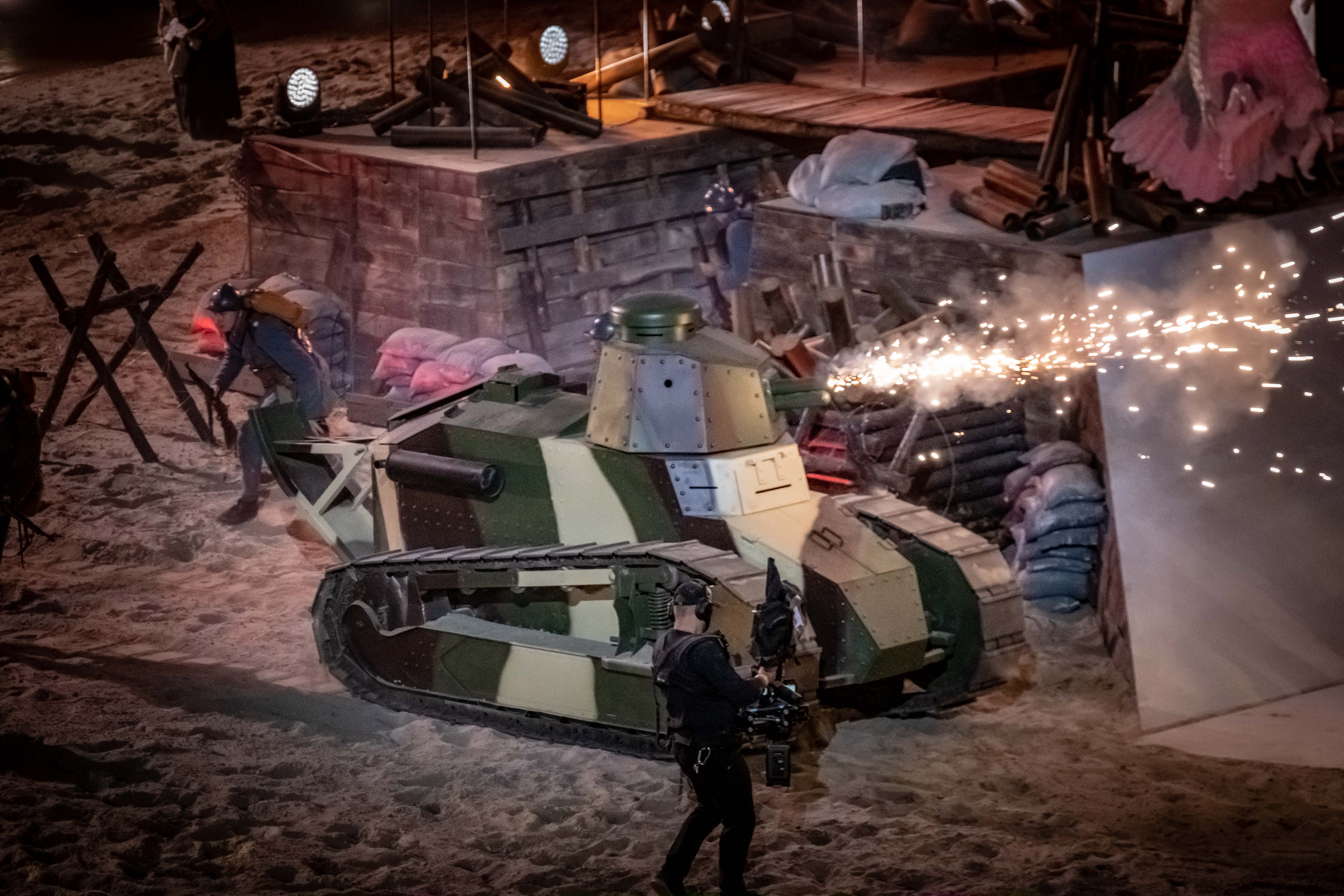 The spectacle was a chance to remember the heroes of the Polish Army who gave Poles the chance of 20 years of freedom before their fledgling state was strangled in adolescence.

In front of an audience of 10,000 disinfected, social-distanced and mask-clad spectators, hundreds of actors, horses and historical vehicles recreated the events from 100 years ago using song, music, narration, film and light. 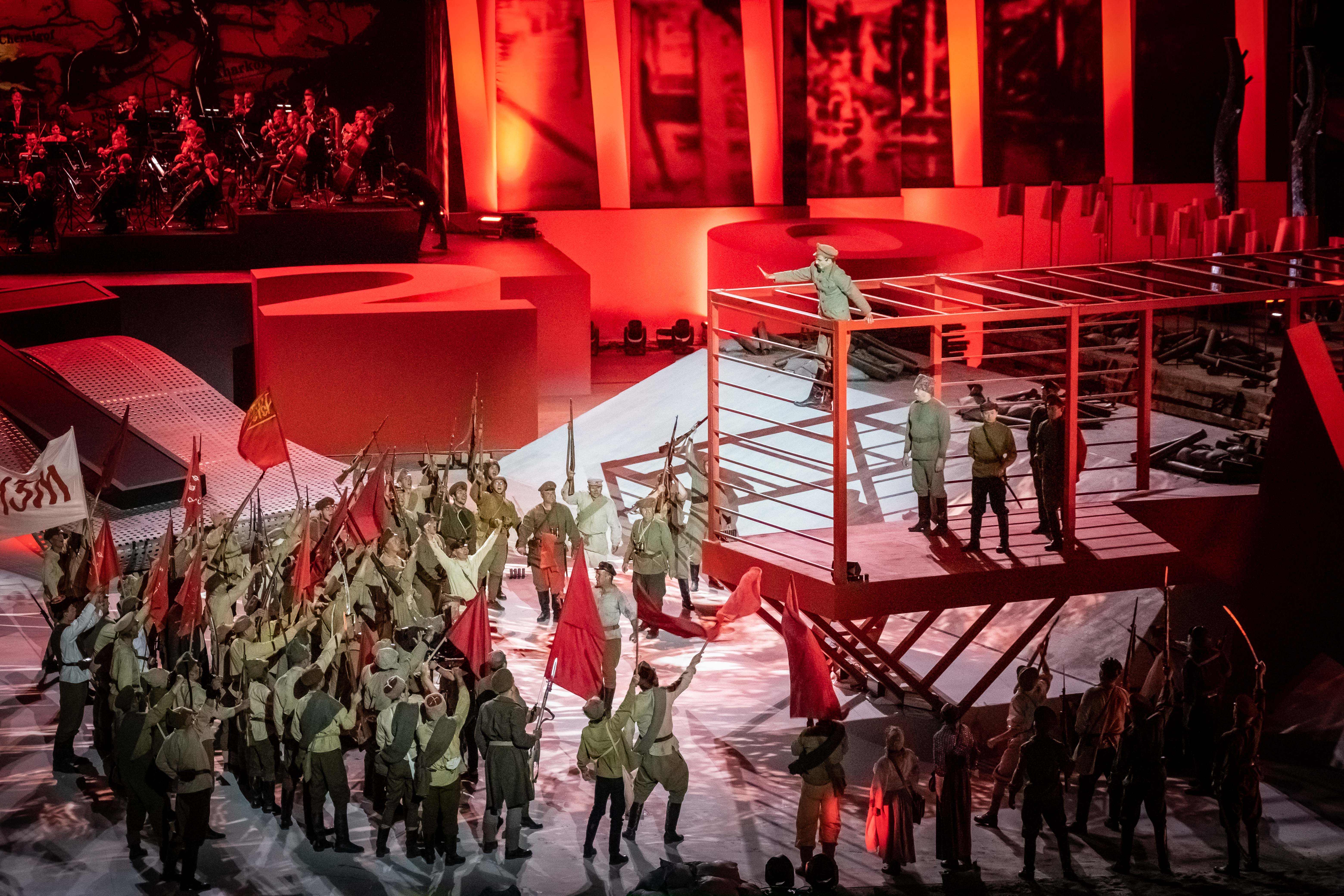 The evening started with a musical interpretation of ‘My Homeland’, a poem by Polish bard Cyprian Norwid. The action was interspersed with a number of patriotic songs performed by well-known singers and accompanied by the Polish Radio Orchestra.

For the purposes of the show, the pitch was turned into a huge battlefield, with trenches of the two opposing armies facing each other. Between the trenches was a huge stage. 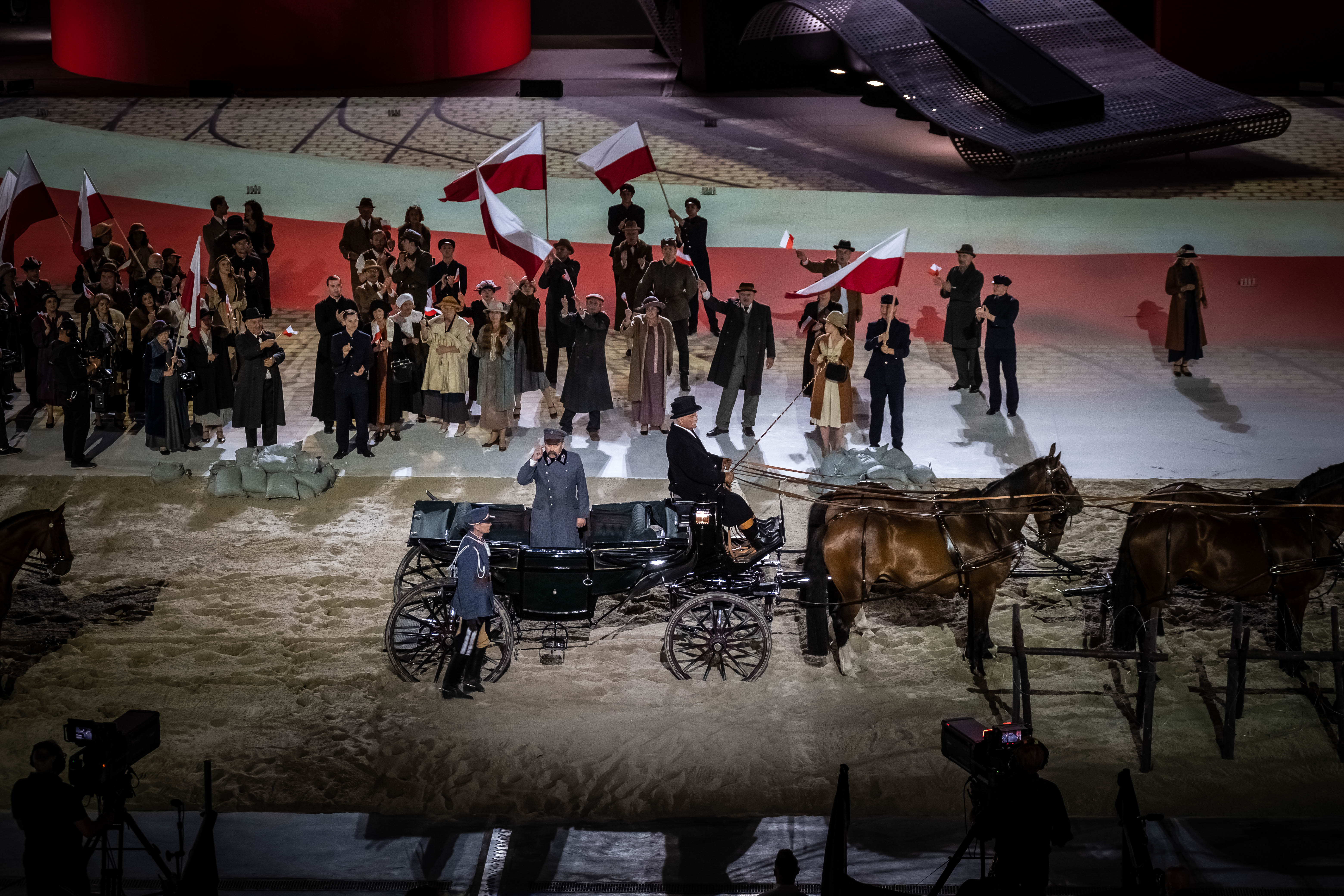 Its central element were the giant numerals of 1920 separated by a huge cross lying in the middle.

The background was a giant screen that displayed intermittently archival footage, scenes played by actors in the trenches and computer animations. 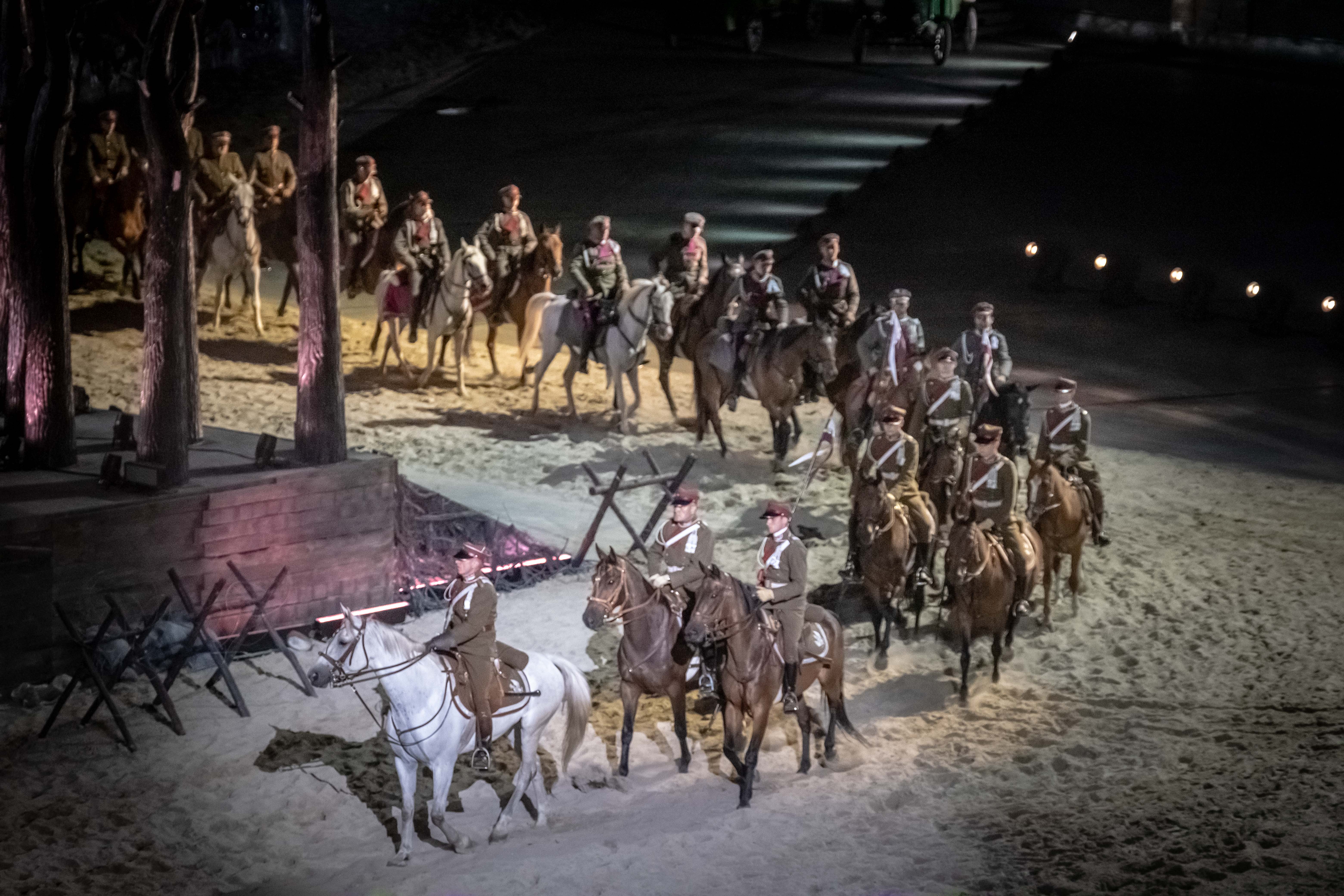 An earthen track around the edge of the stage area hosted reenactors on horseback as well as military vehicles from the period.

The performance re-enacted historical events from the Polish-Bolshevik war. The performance used historical texts, including the telegram of November 16, 1918, which the father of Polish independence Józef Piłsudski sent to the United States, the British, French, Italian, Japanese and German governments and the governments of all combatant and neutral countries informing them about the existence of the Polish state. 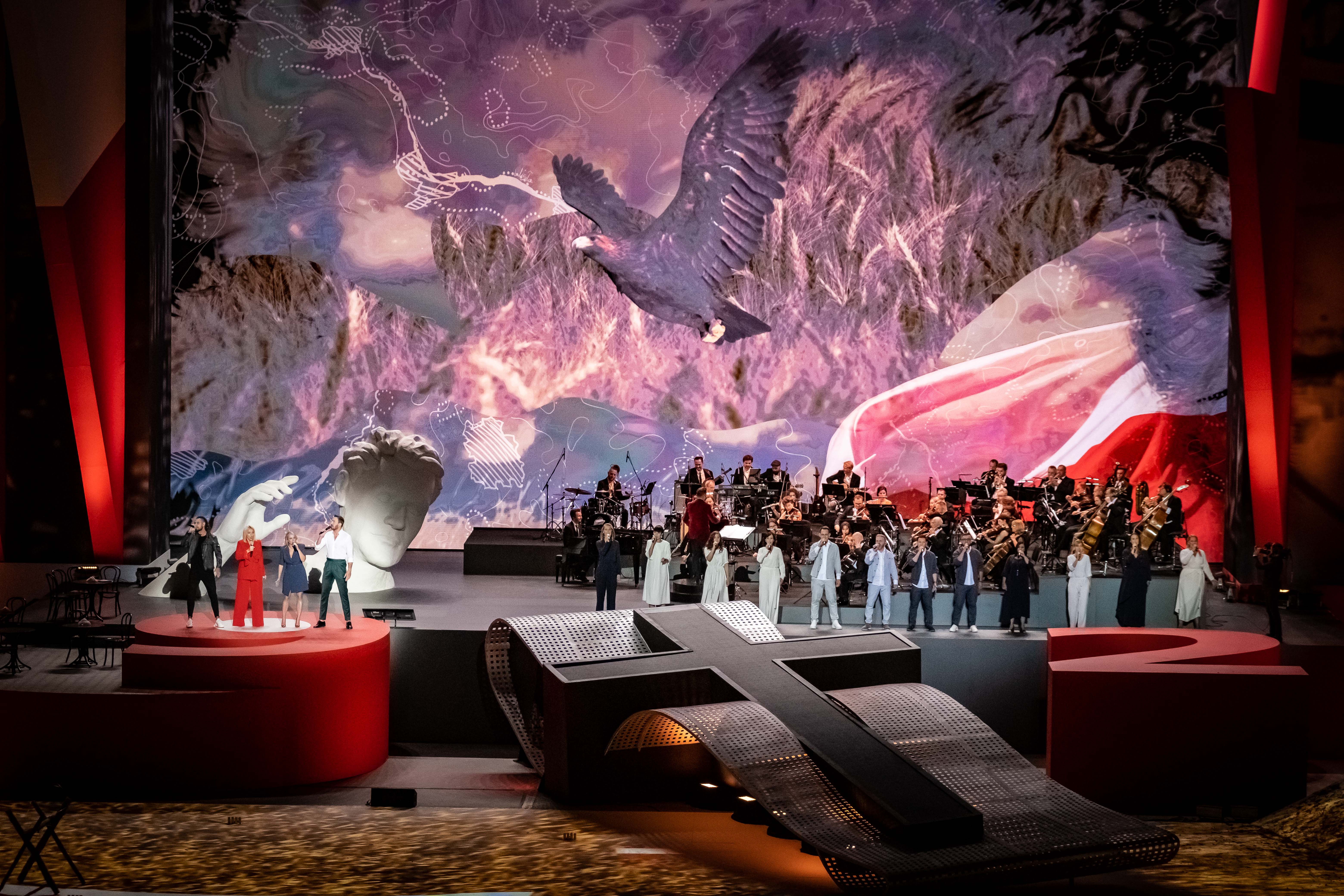 Along with re-enactment music also featured in the show.Kalbar/TFN

Piłsudski, played by the actor Jarosław Gajewski, stepped down from his carriage to read the telegram “The political situation in Poland and the yoke of the occupation have not yet allowed the Polish nation to express its fate freely. Thanks to the changes that took place as a result of the great victories of the allied armies, the resumption of Polish independence and sovereignty is now a reality. The Polish state is created by the will of the whole nation and is based on democratic foundations,” he proclaimed. 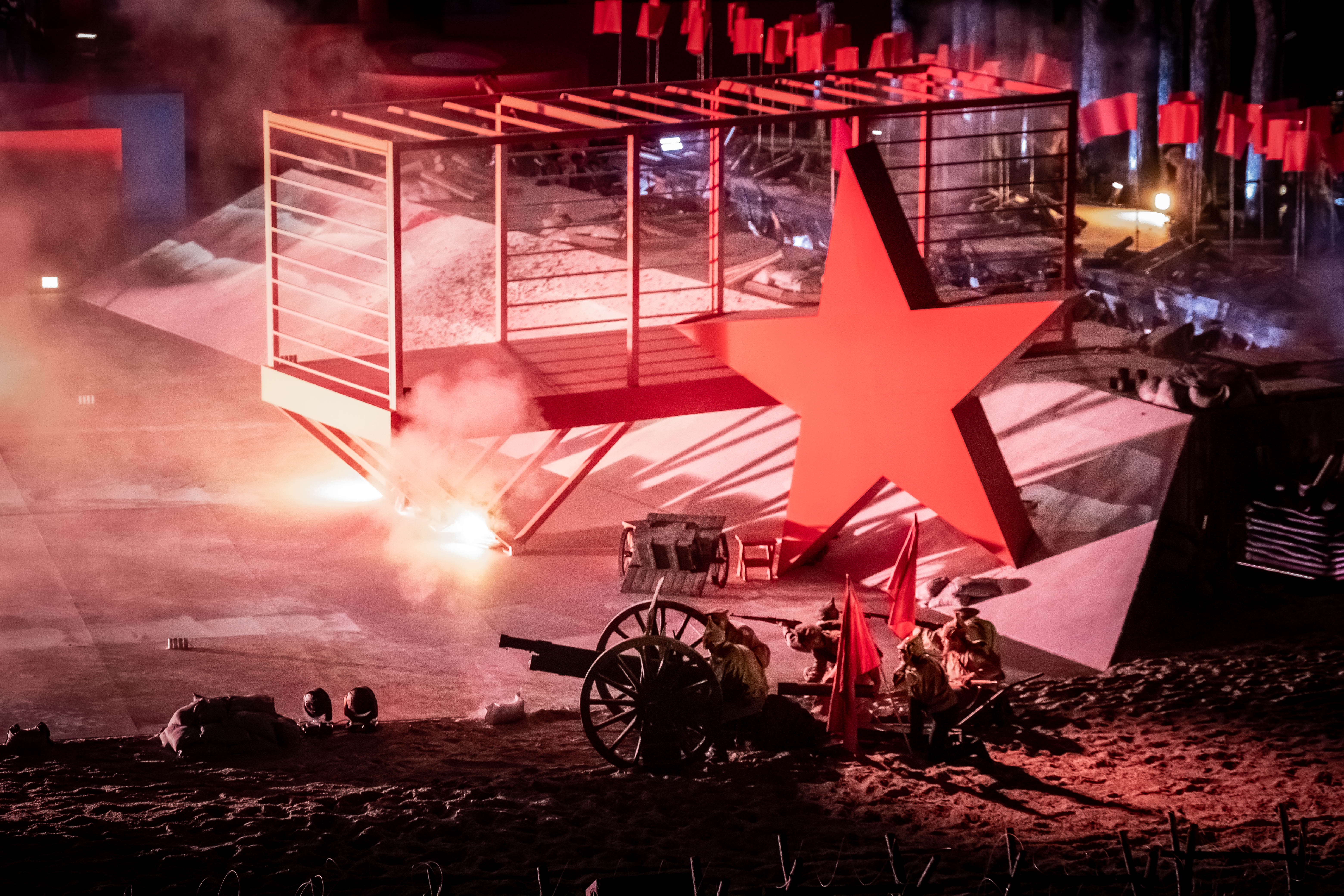 Later, Red Army chief Leon Trotski, addressed his troops with the chilling clarion call: “Heroic soldiers of the Red Army! It's time to be clear. The Red Banner Army and the army of the predatory White Eagle are facing a battle of life and death. Through the corpse of White Poland leads the way to the worldwide fire of revolution. On our bayonets we will bring happiness and peace to working masses. To the west!" 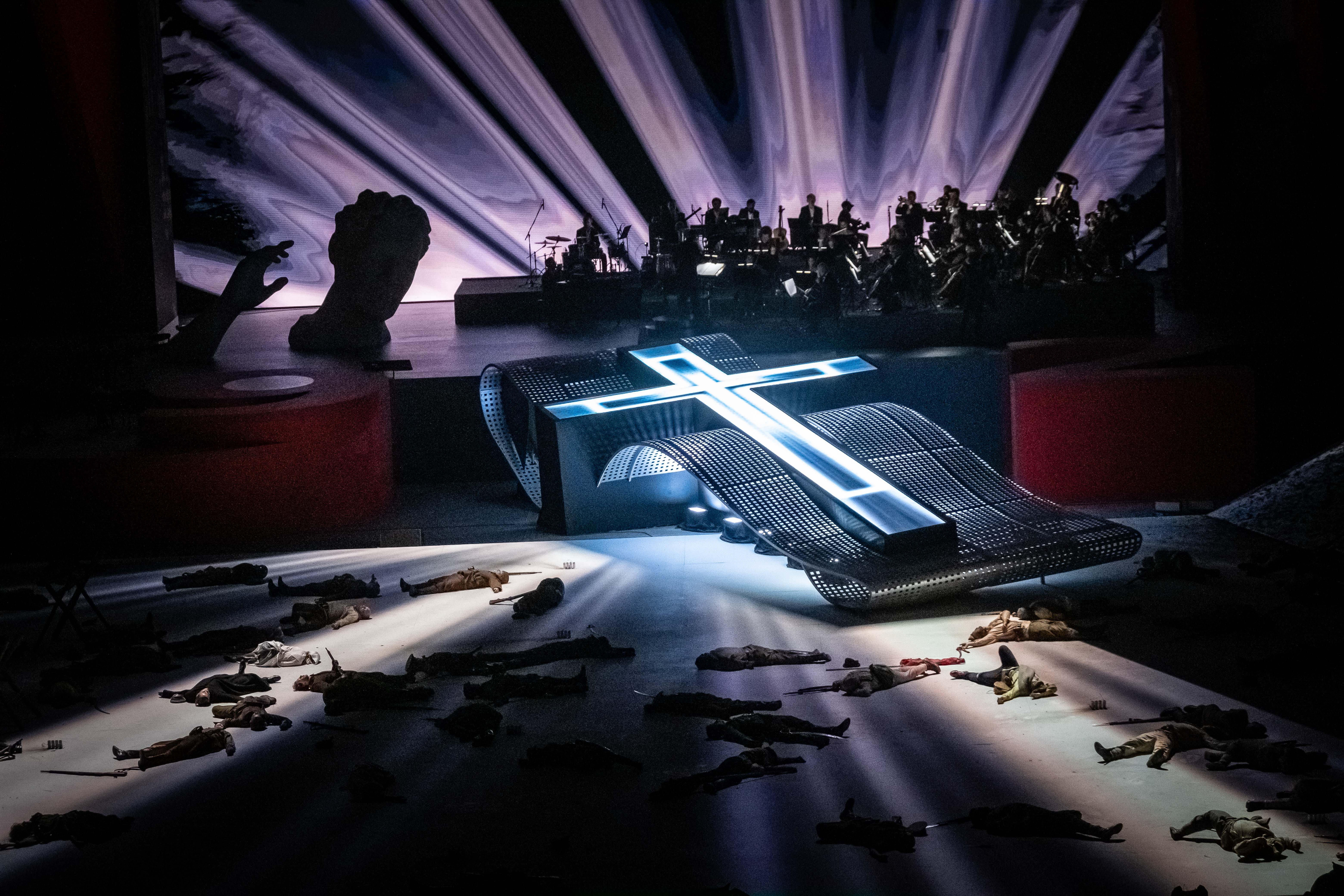 The scene after the battle.Kalbar/TFN

The final rout of the Red Army by Polish forces was depicted by a breathtakingly intense exchange of fire between the opposing trenches that deployed bucket loads of pyrotechnics.

The spectacle was attended by Polish prime minister Mateusz Morawiecki, deputy prime minister and culture minister Piotr Gliński and Sejm speaker Elżbieta Witek. The show was broadcast live to the nation on TVP as well as on Polish Radio and the internet. 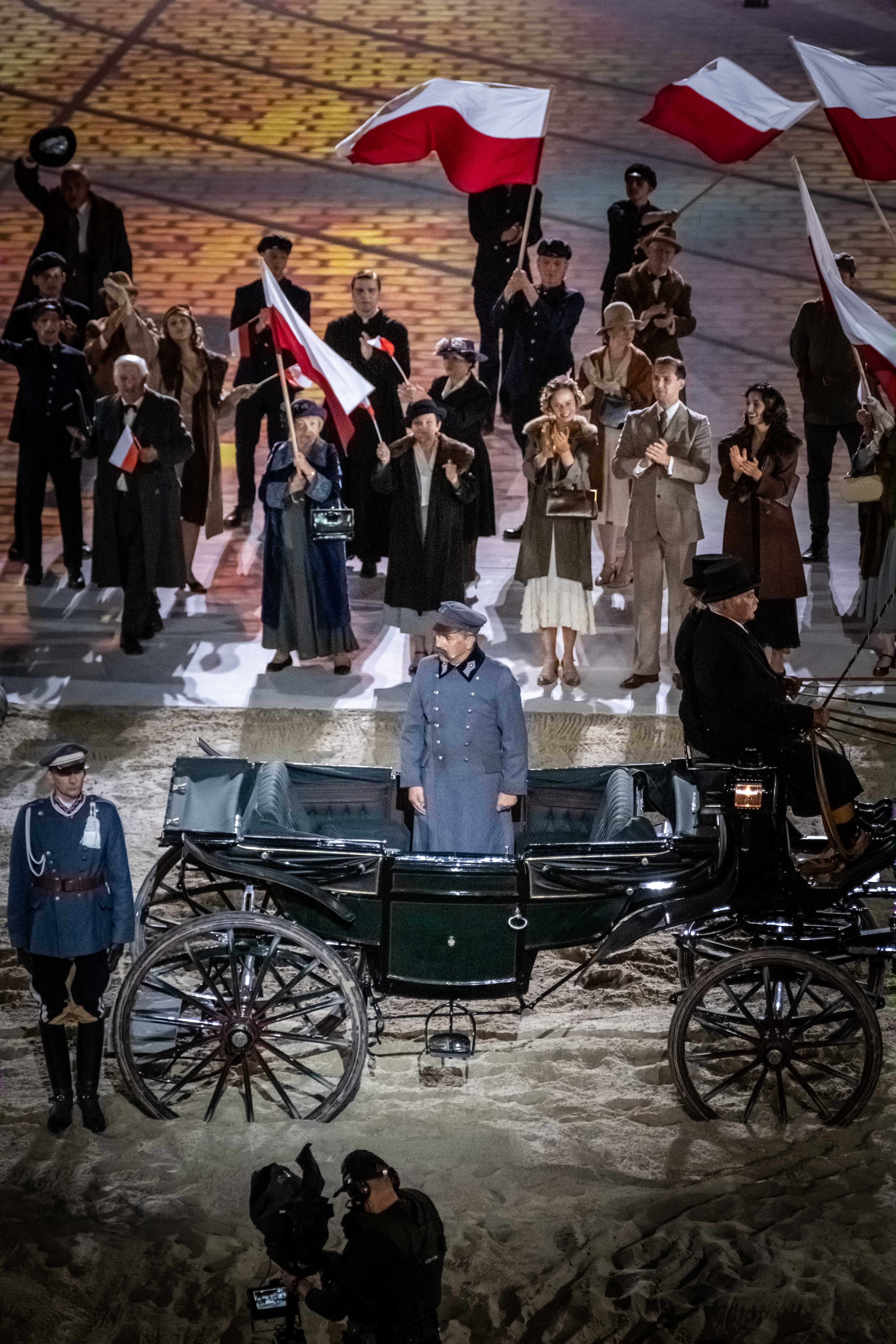 Piłsudski’s victory saved the infant Polish state from a still birth and possibly saved vast stretches of Europe from communism.Kalbar/TFN