Songs of freedom: The enduring popularity of Warsaw Uprising songs

On the hot summer night of August 1st, at 8 o’clock p.m., on the 74th anniversary of the Warsaw Uprising, Varsovians gathered in Piłudski Square, in the centre of the Polish capital, to listen and sing along to songs that accompanied the freedom fighters in 1944.

The annual concert, called, in English, ‘The Residents of Warsaw sing (un)forbidden songs’, has become something of a tradition, with this year seeing the Polish president Andrzej Duda joining in as thousands belted out evergreens from the Warsaw Uprising songbook.

The battle songs, more than 70-years-olds and conceived mostly during the first days of Warsaw Uprising, form a vital part of Polish popular culture. There are very few people in Poland who aren’t familiar with the music and lyrics of rousing Uprising anthems such as Warszawskie dzieci (Children of Warsaw), Pałacyk Michla (Michler’s Palace) or Marsz Mokotowa (Mokotów’s March).

But these war songs weren’t exclusively about fighting. They were also an expression of hope for a regained freedom following five years of horrific Nazi German occupation.

Over the years the songs have been covered countless times by different artists. But it was at the beginning of the 21st century that they really began to take off. 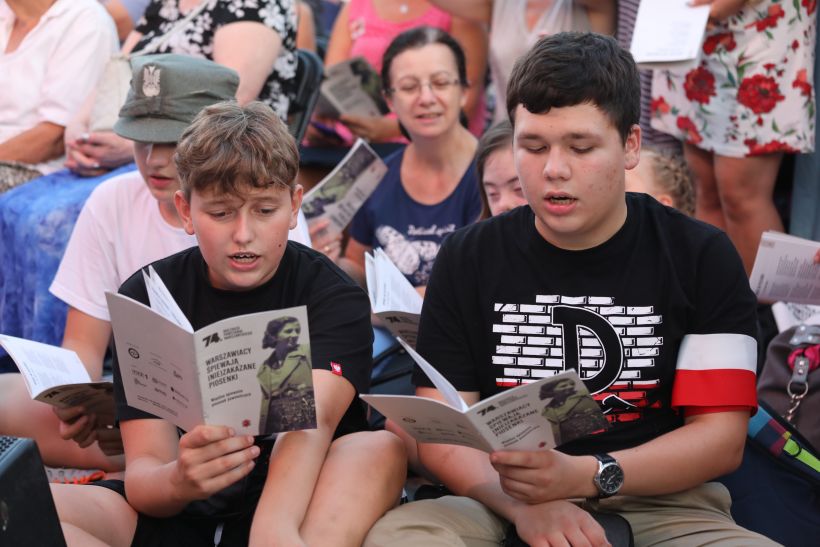 Songs from the Uprising have resonance with both young and old.Tomasz Gzell/PAP

The breakthrough was a record from a then relatively unknown Polish rock group from the town of Płock, called Lao Che. In 2003, they released an album called, unpretentiously, “Powstanie Warszawskie” (Warsaw Uprising). In contrast to its simple title, however, the content and structure was more sophisticated. This wasn’t just a set of songs about the Warsaw Uprising, it was a thoughtfully-constructed concept album reminiscent of a radio play or drama.

The lyrics veered away from repeating the same old battle themes of the original songs, instead becoming deeply immersed in the context of Polish culture. Accompanied by a heavy punk rock-style backdrop, the band created an explosive expression of both then and now, winning awards and cementing their place in the history of modern Polish music and culture.

Other concept albums were to follow. In 2009 the Warsaw Uprising Museum itself released an album entitled “Gajcy!”. In contrast to Lao Che’s album, “Gajcy!” was a compilation of songs performed by various big names on the Polish music scene including Kazik, Dezerter and Lech Janerka. What connected the songs were that the lyrics all came from the wartime poet Tadeusz Gajcy, a member of the Polish resistance who was killed during the Warsaw Uprising at the age of 22.

In 2012 the museum released another concept album, this time a reggae album, entitled “Morowe Panny” (which loosely translated means Groovy Girls). Conceived by Polish reggae master Dariusz Malejonek, he brought together some of Poland’s leading female singers to create a series of songs about the role of girls and young women in the Warsaw Uprising. The outcome was an unparalleled musical blend of reggae, folk and hip-hop with lyrics mixing the times of the Uprising with today’s reality.

A string of Polish hip-hop artists soon followed with their take on the Uprising. Most notable are O.S.T.R with “Dziś idę walczyć, mamo!” (“I am going to fight today, mother”), Hemp Gru with “63 dni chwały” (English: 63 Days of Glory) and “Pierwszy sierpnia” (“First of August”) who joined forces with the traditional Warsaw urban folk band Kapela Czerniakowska, to bring together a blend of both musical styles and cultural contexts.

It’s not only in Poland that the Warsaw Uprising has been commemorate in song, however. Several foreign bands including Sweden’s Marduk and Sabaton, Germany’s Heaven Shall Burn and the Dutch band Hail of Bullets have recorded numbers dedicated to the events of August 1944.

Possibly the most standout example would be from Slovenia’s industrial music band Laibach. In 2014, on the 70th anniversary of Warsaw Uprising, they made a mini-album “1 VIII 1944. Warszawa”. The album was sponsored, and officially approved by Poland’s Ministry of Culture and National Heritage.

Having conquered his childhood fear of water, trucker Tomek Gazda now uses his free time to swim in crocodile and shark-infested waters.

Tomb with a View: Filled with stunning sculptures ranging in style from Art Nouveau to ancient Egyptian, Powązki cemetery was opened 230 years ago today