The Atlantic, the oldest non-stop operating cinema in Poland, is turning 90 this year. A legendary spot on the Warsaw map, over the years leading artists, influential politicians, movie lovers, and kids skipping school have all filed through its doors to bathe in the delights of the silver screen.

But with the Atlantic’s future uncertain TFN has taken a look at what made this particular movie theatre so special.

The Atlantic Cinema on 33 Chmielna Street in Warsaw is located on one of the capital's most popular streets. A pioneer of multiplex in Poland, it currently has four viewing rooms for 794 people. However, the venue is more than just a cinema. 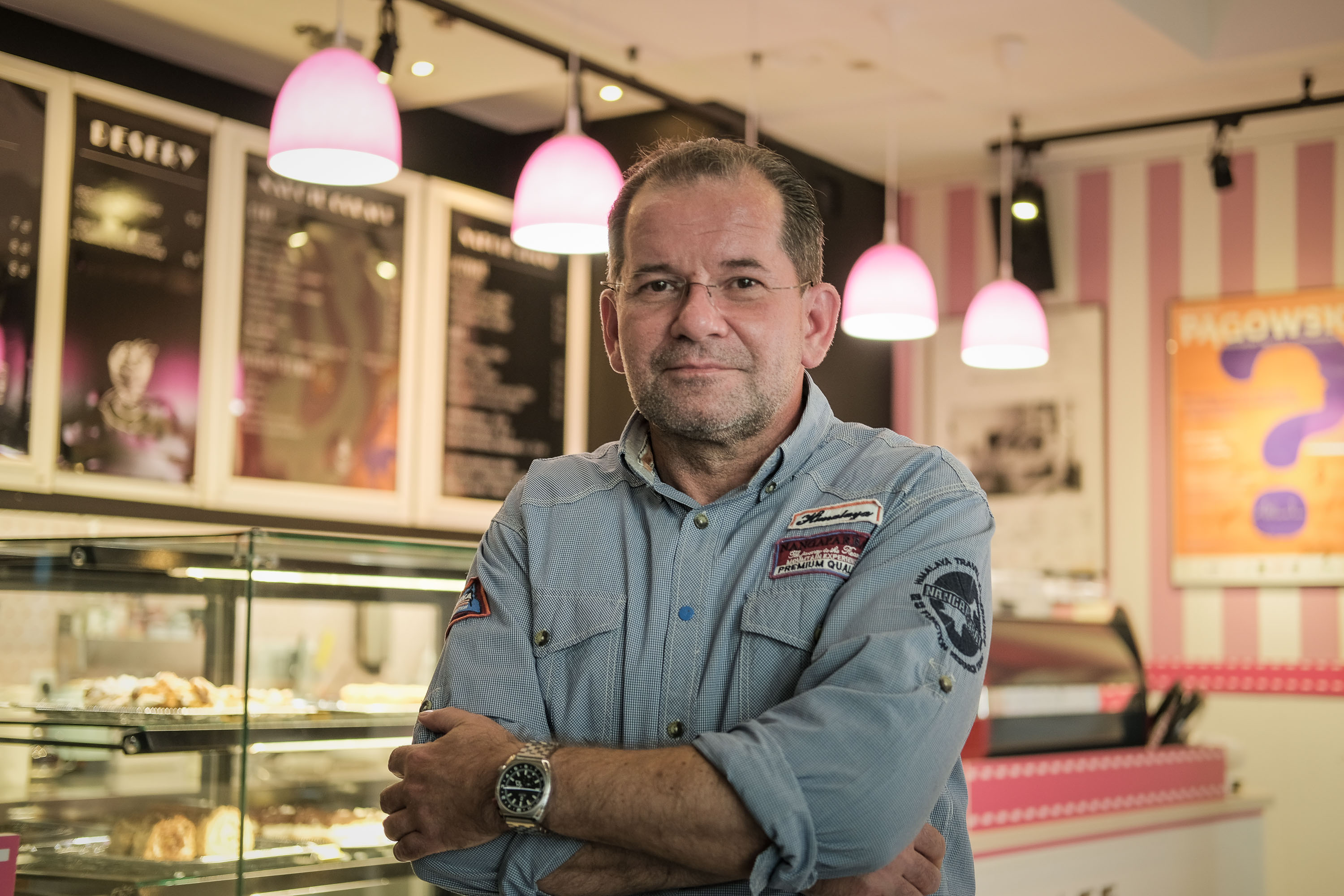 “Some people say this place is unlike any other cinema,” Krzysztof Konopacki, the Atlantic’s manager, told TFN. “We simply wanted to do something more than just press the play button and show a movie.”

Konopacki believes that the magic of running a cinema is in something more – choosing the repertoire, bringing together people from many walks of life, and making sure to honour its long history.

The Atlantic dates back to 1930 when it opened as the fourth and most modern cinema in Warsaw. It was also the first movie theatre to show “talkies”. Its first premiere ( a Polish movie “Dziesięciu z Pawiaka” – “Ten men from Pawiak”) was attended by Poland’s top brass: Marshal Józef Piłsudski, President Ignacy Mościcki, and Prime Minister Aleksander Prystor. 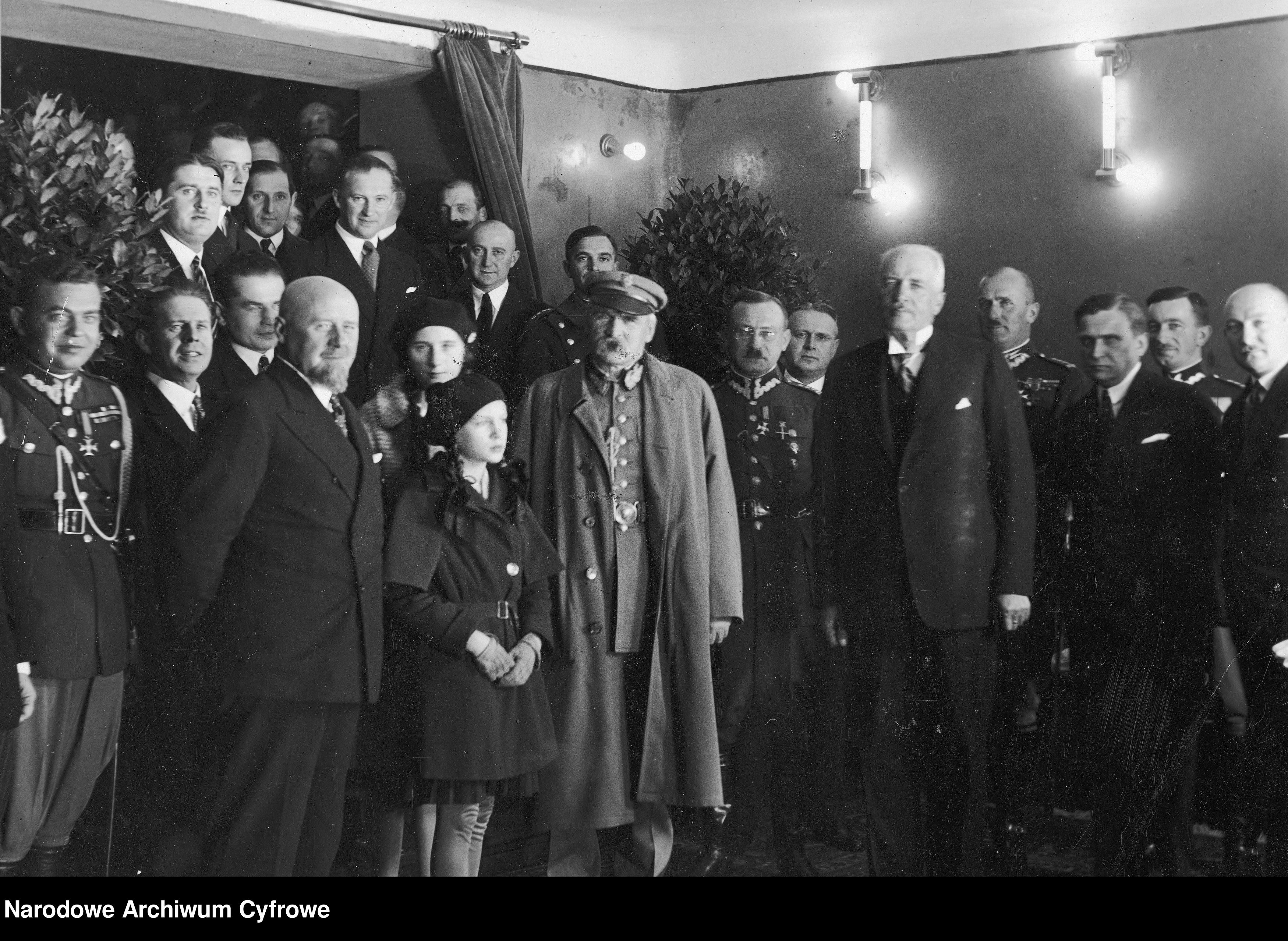 Before World War II, the Atlantic was a cinema for those in high society, who made sure they were seen attending it regularly. Rather than just popping in for a movie, the guests would also have dinner in the adjacent restaurant, and watch the film between dishes – the same film was presented for the entirety of the evening.

“The ticket to the cinema cost PLN 100,” explained Konopacki. “In the interwar period, PLN 100 meant one-third of a Polish Army officer’s salary.” Today that would be more than EUR 250. 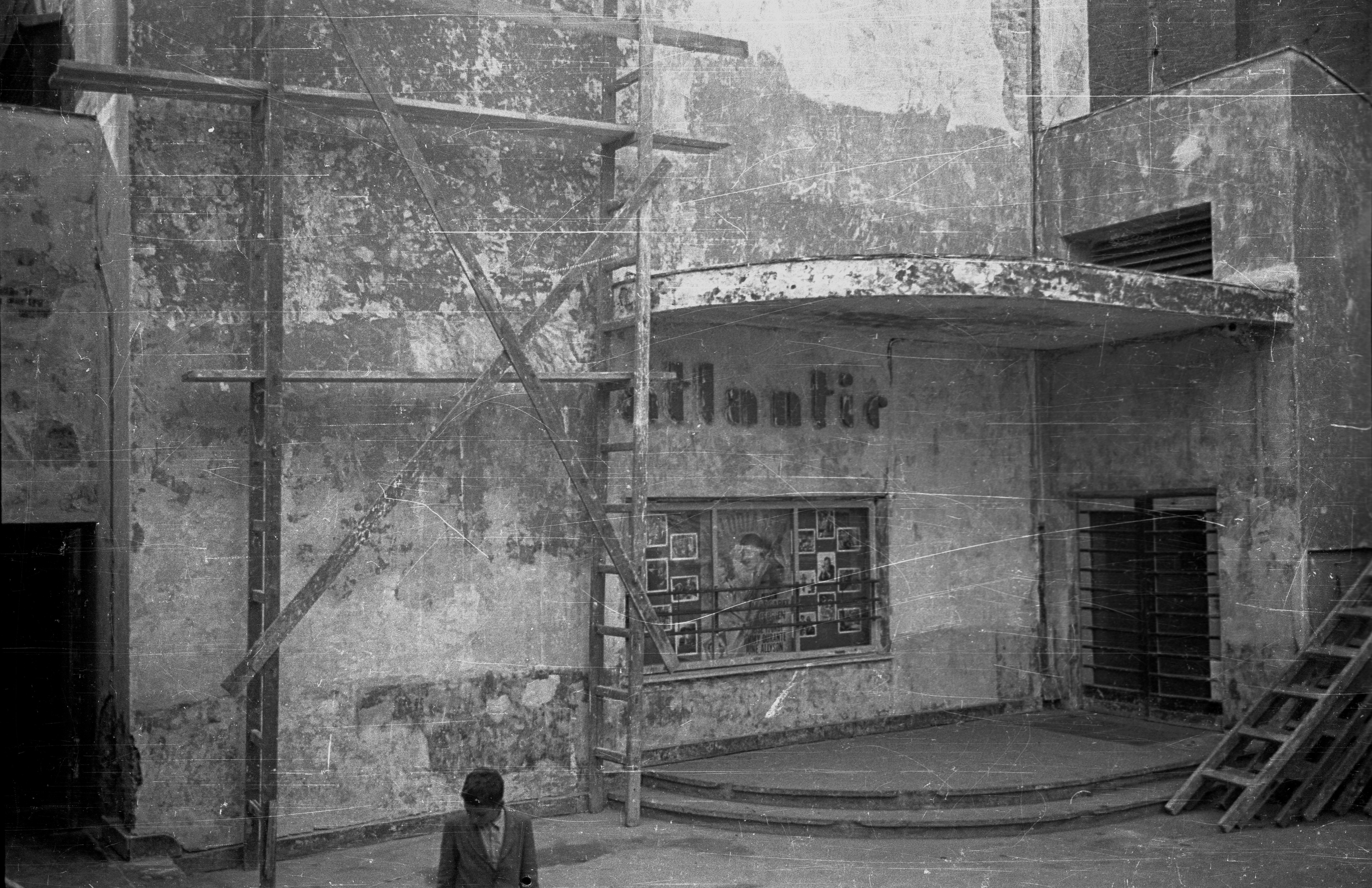 Atlantic before its post-war renovations.CAF/PAP

The cinema survived the outbreak of World War II and continued to function, though it is hard to say now what kind of repertoire the German occupants forced upon it. During the Warsaw Uprising it served as a field hospital, first for the Poles and then for Germans. Until recently, there was an enormous hole in the cellar wall which was used by the Polish combatants to walk undetected in the besieged city.

It also became a casualty of war when in 1944, a huge fire destroyed a tenement house on Chmielna close to the cinema, but luckily the Atlantic escaped almost unscathed. 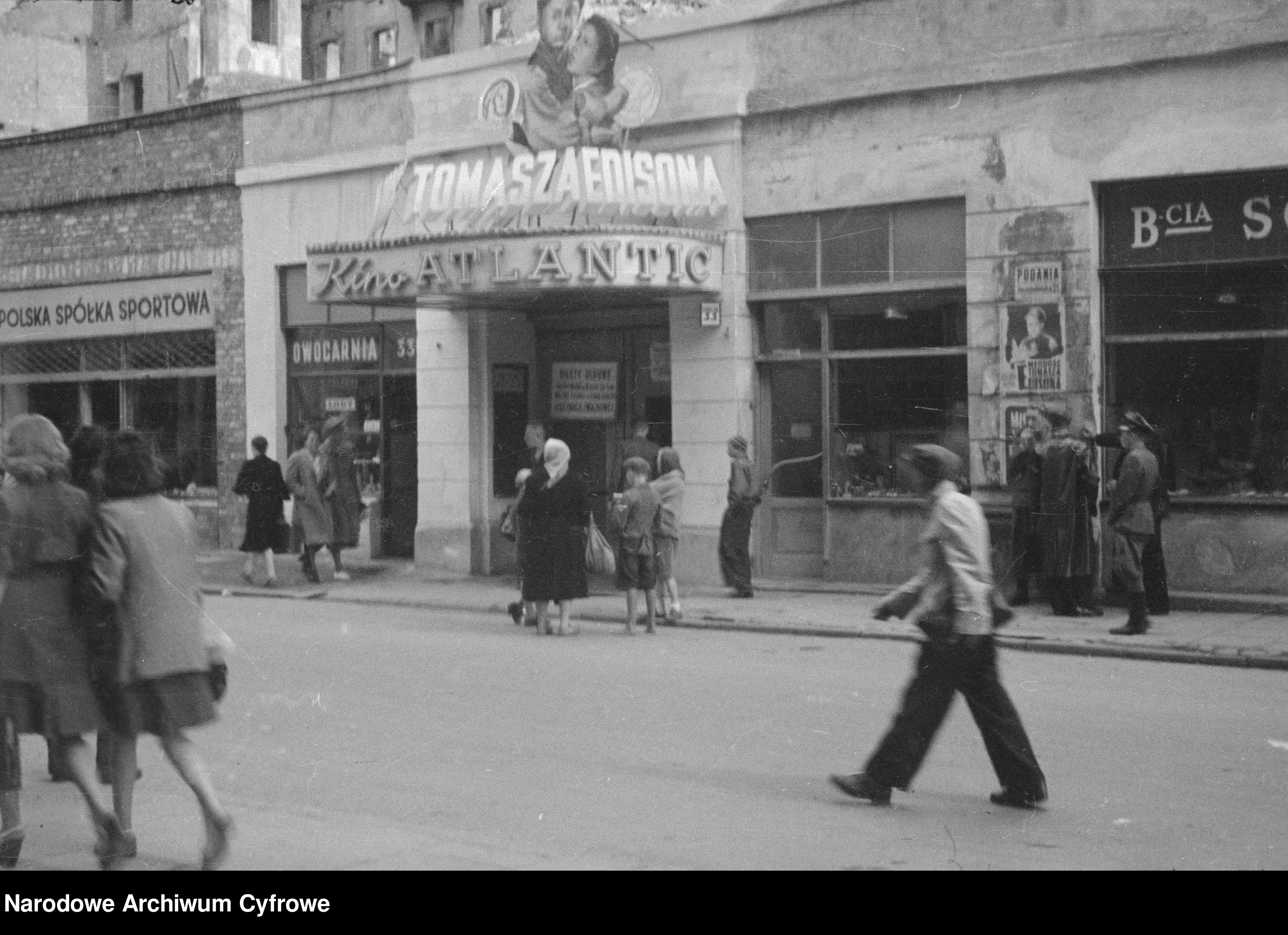 The cinema on Chmielna after the war.Narodowe Archiwum Cyfrowe

The Atlantic once again started showing movies on September 19th, 1945, and the selection of films corresponded to the new reality in which Poland found itself. The first movie shown after the war was Soviet-made “Berlin” about the decisive battle between the Red Army and German forces for the Reich’s capital.

Communism was a bleak time for film lovers all over the Soviet bloc. However, going to the cinema remained a popular pastime. The Atlantic itself was described as a buzzing centre of Warsaw’s nightlife in “The Man With White Eyes” (“Zły”), a novel by Leopold Tyrmand. Especially notorious were the crooks illegally selling tickets in front of the cinema. 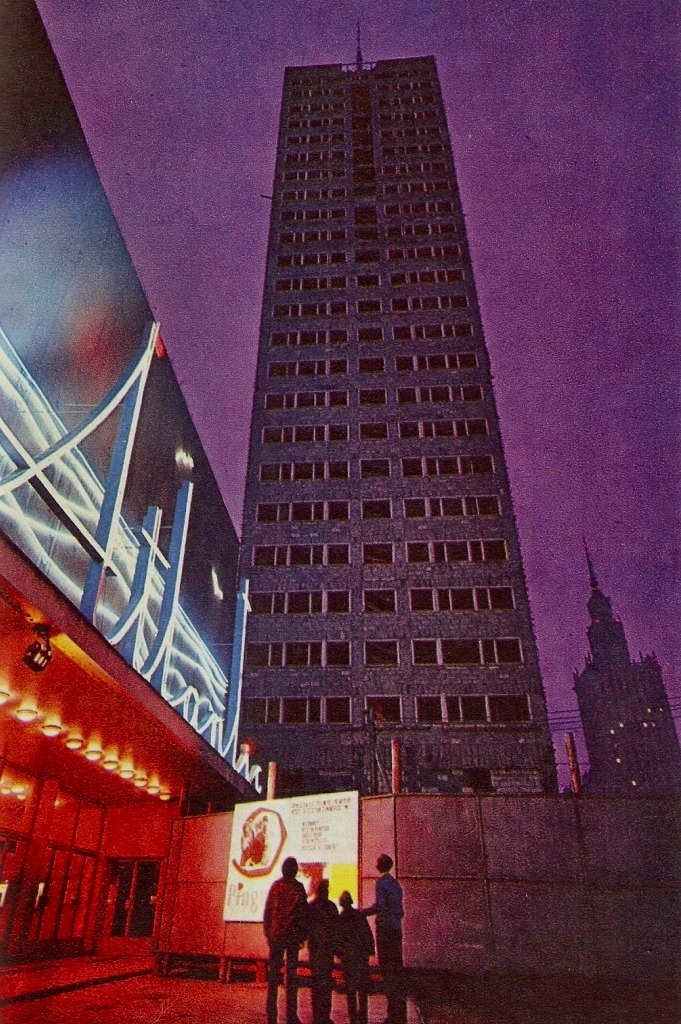 Come the 1960s and the cinema underwent another transformation. A new concrete construction with thick, massive walls replaced the remnants of tenement houses. The façade gained a great blue neon sign, which made it stand out on Chmielna.

The formula of the cinema changed too. It became two cinemas under one brand. One was Atlantic, while the other was called Non-stop.

Speaking about the Non-stop cinema, Konopacki said: “It actually worked at night too and showed quite controversial films. At some point it started to be said that it was the only cinema in Poland that was deemed ‘pornographic’. Inviting a girl to see a movie at Non-stop was a way to check if she was interested.” 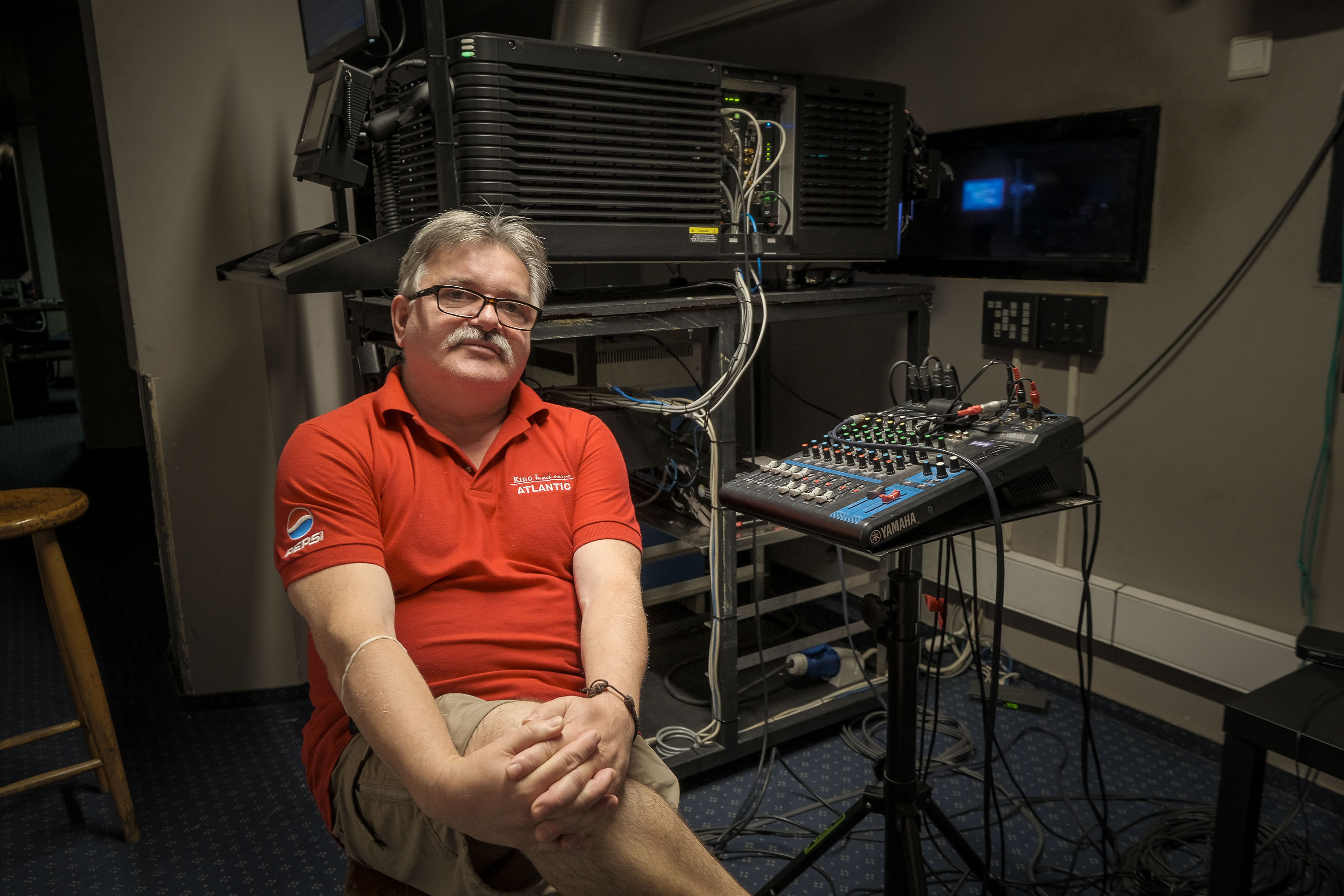 Jacek Królikowski started work as a film operator at the Atlantic in 1979.Kalbar/TFN

Jacek Królikowski, now 62-years-old, started working in the Atlantic in 1979 when he was only 21. He remembers the day quite well. It was November 1st and the cinema was showing the movie ‘Klincz’ (Gridlock) by Piotr Andrejew – exactly the same movie Królikowski saw when he applied for the job.

Speaking to TFN about his many years operating projectors and presenting countless films to the audiences, Królikowski said: “Back in the day, the films would be sent to us in cases with tapes. Each movie was made of about six rolls of tape. We had to glue them together and then display them using two projectors.” 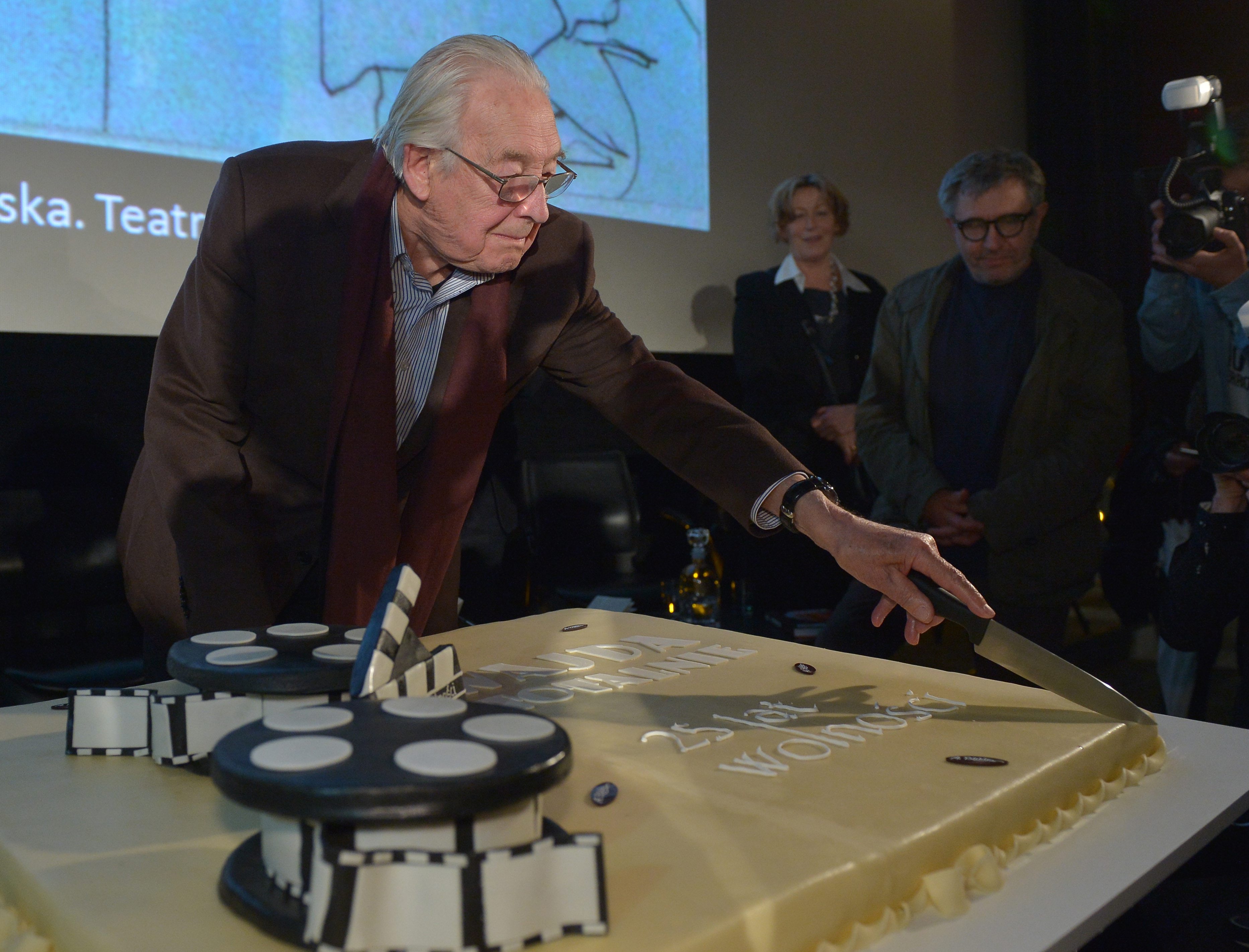 Andrzej Wajda takes part in an event hosted by the cinema.Radek Pietruszka/PAP

Each roll was about 600-metres long. Projector operators such as Królikowski had to make sure the show went smoothly and the viewers didn’t realise when the rolls were being changed. That doesn’t mean the process went without hitches. The film was delicate and would easily break.

A prime example, though from the year 2001, was when the Atlantic was showing the Bollywood classic ‘Kabhi Khushi Kabhie Gham’. The 210-minute-long movie equalled about eight kilometres of film. An accident with the rolls falling down resulted in several hours of work for six operators to stitch the film back together. Although the final version was 15 minutes shorter than the original, none of the viewers noticed. 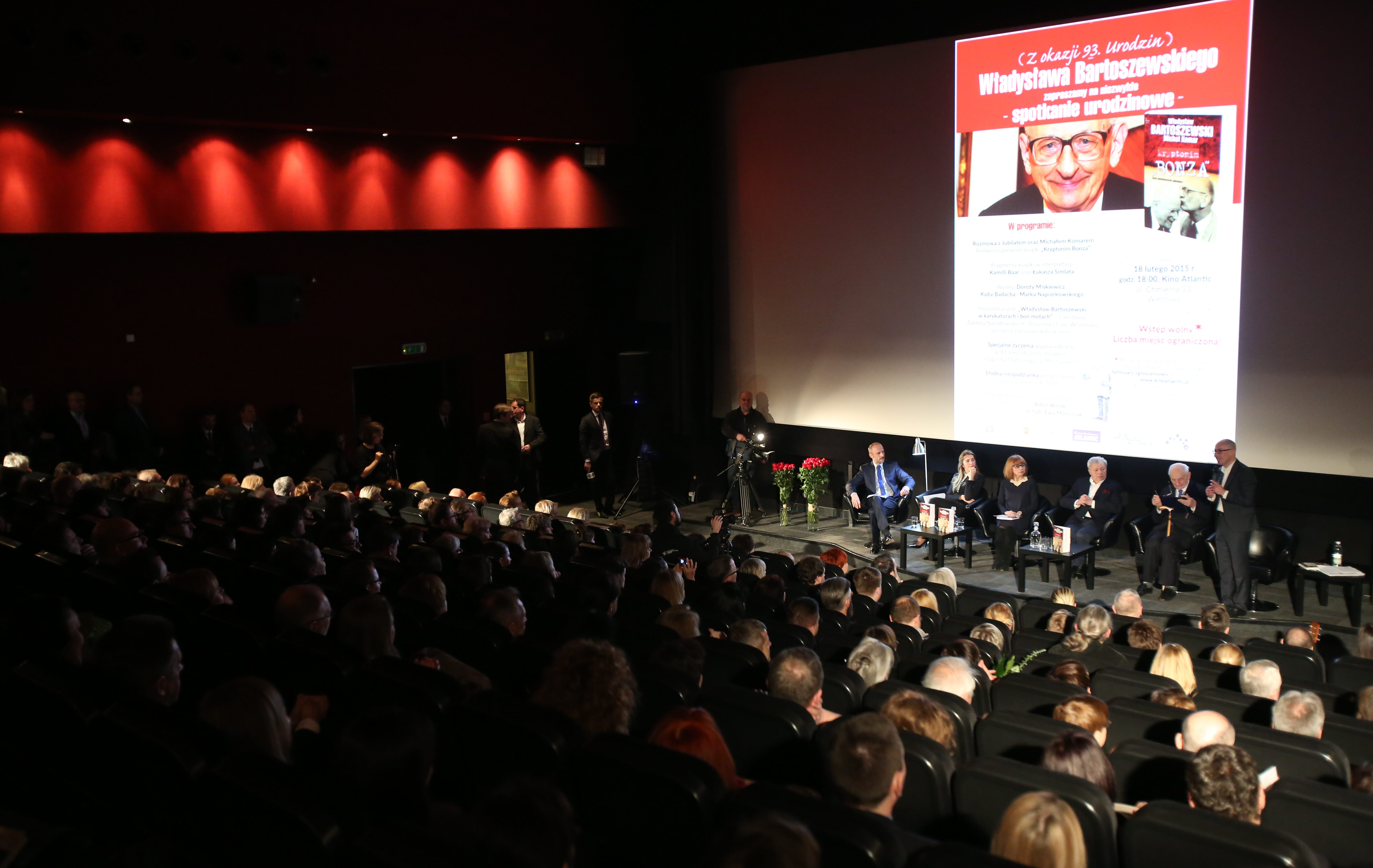 The troubles with film rolls ended only a couple years ago owing to the introduction of digital technology. With it, the profession of cinema operator is also bound to disappear as well.

Both the Atlantic and Non-stop cinema functioned unchanged until 1997, which was when the major reconstruction of the cinema began. The result was the first Polish mini-multiplex with four separate rooms. It was re-opened on January 14, 2000. 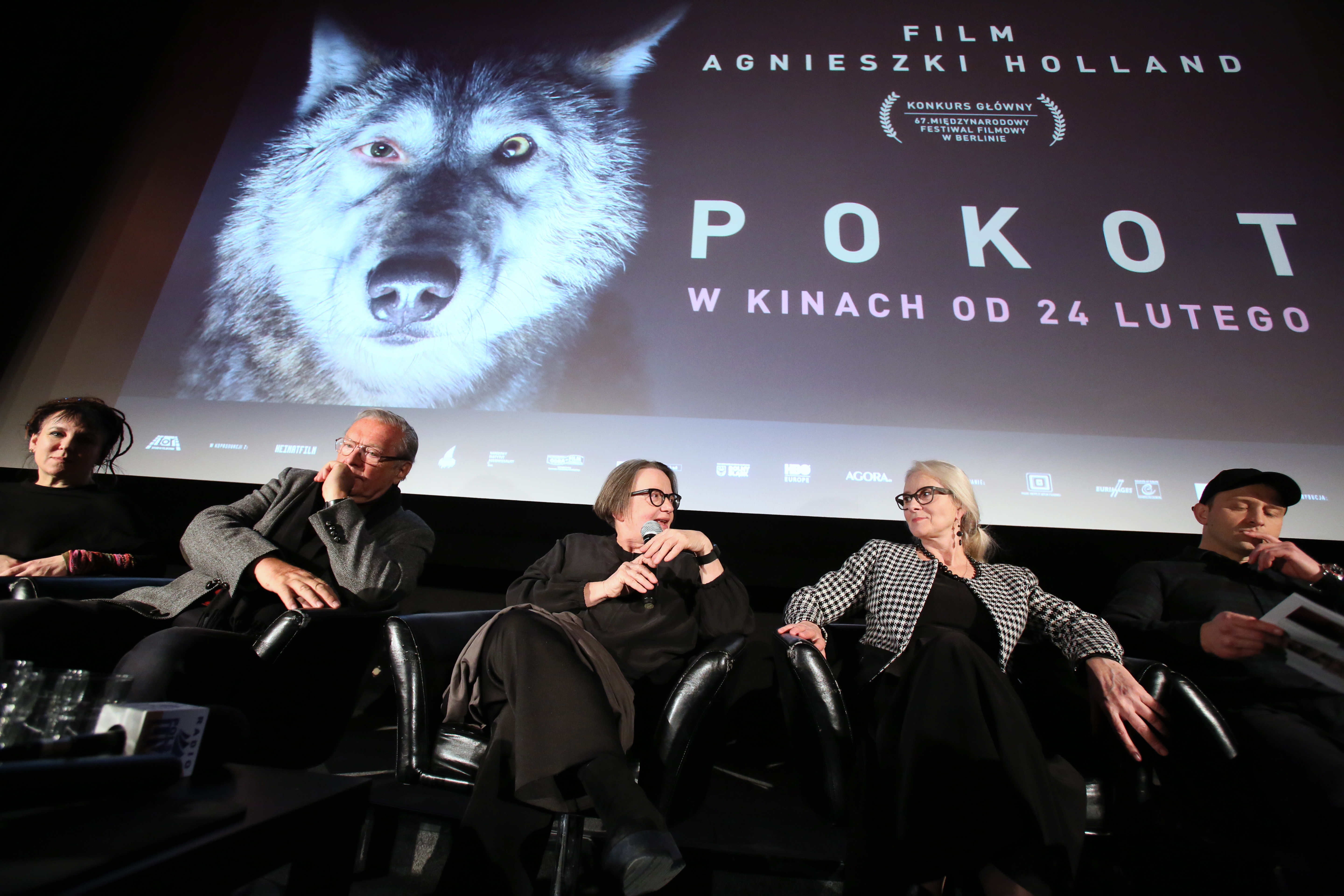 Around that time a new company, Viktonex, took over its management. Konopacki, who had run a company specialising in electric installations, started running the Atlantic. His goal was to broaden the cinema’s role. He and the staff organised events bringing politicians, artists, and film lovers together. From art shows, literary meetings to panel discussions, everyone who was someone had a chance to appear at the Atlantic. 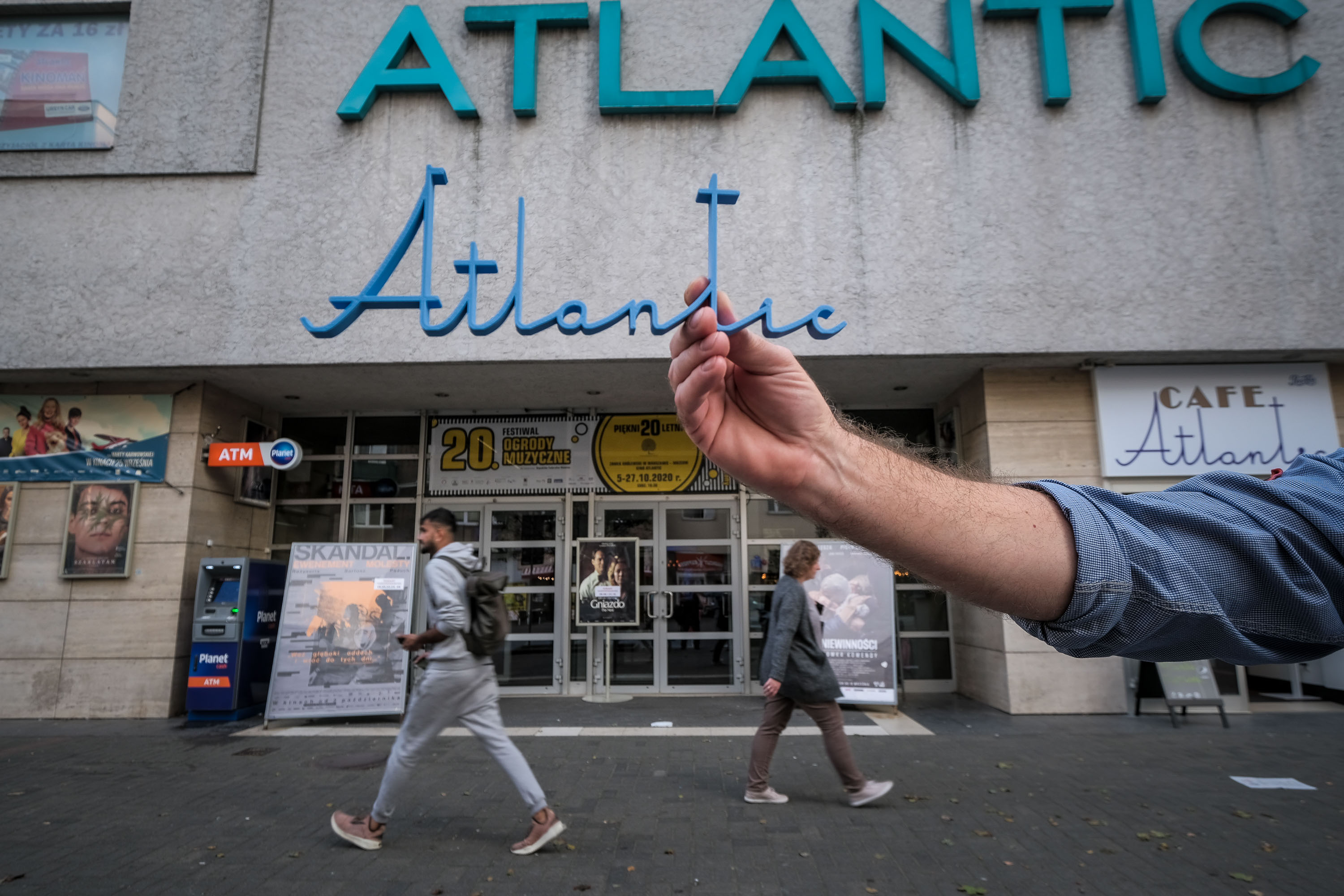 A model of the old neon with the current oneKalbar/TFN

Despite its long history, it is uncertain how the iconic cinema’s future will look. The current operator, Viktonex, will lose their contract in December. The cinema’s owner, Max Film, plans to take over the building and change its character. Although they state that both the cinema and its employees will remain where they are, there are plans to construct a new seven-storey building and move the cinema underground. Only time will tell what the final result will be.

“We wanted it to be something more because this cinema was so much more than just a movie theatre. It is a place of great historical value after all,” concluded Konopacki. 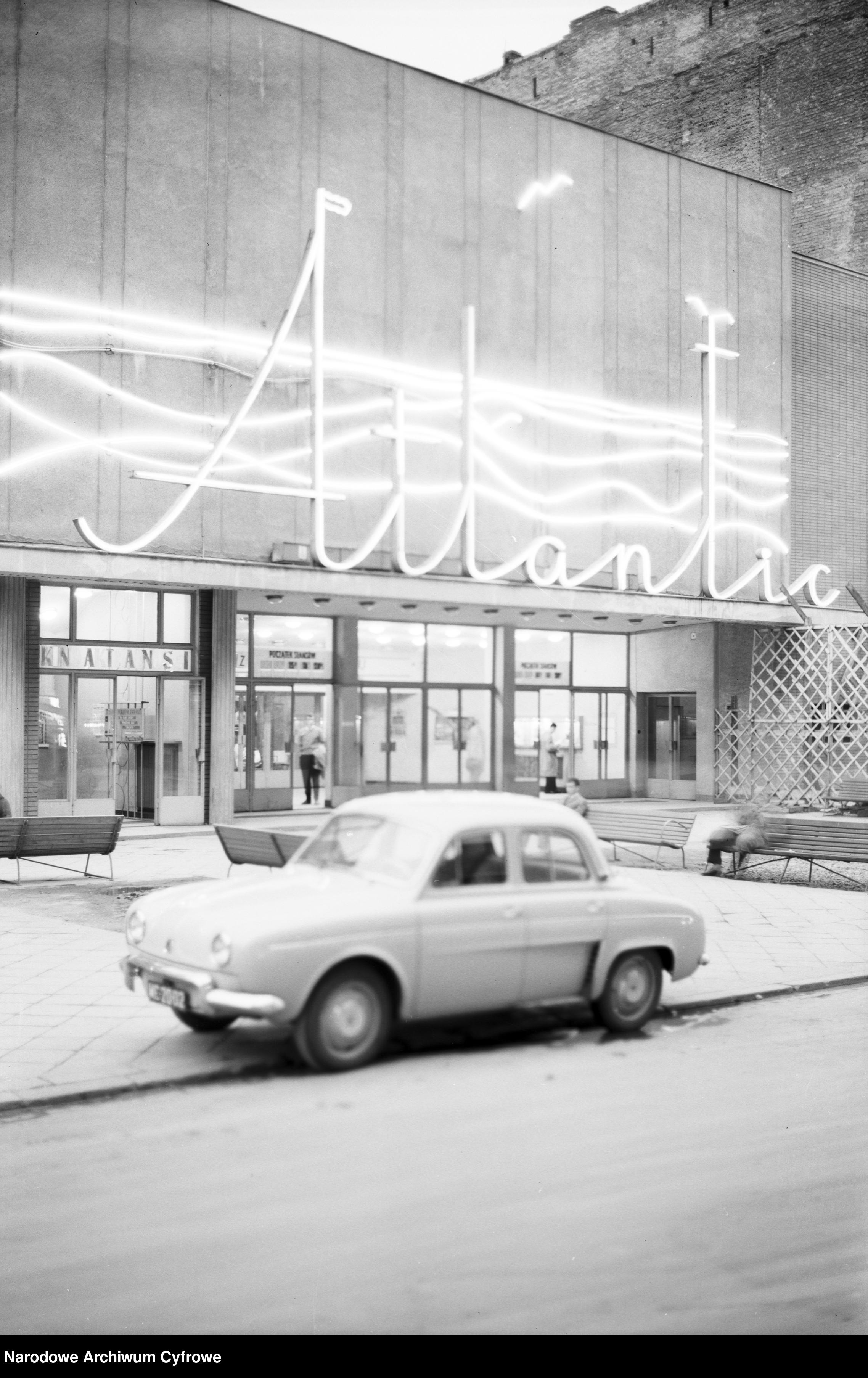 The classic neon sign that has helped cement the cinema into Warsaw’s cultural history.Narodowe Archiwum Cyfrowe