Artist Tytus Brzozowski has returned to the biggest stage possible following the recent unveiling of this fourth mural to date – an XL project celebrating pre-war Jewish life in the Polish capital.

Already widely-known in Poland, and increasingly popular abroad, Brzozowski first forged his name after his surreal water colours depicting fantastical city scenes went viral. Since then, his trademark style has earned him an army of admirers with his work harnessed by such foundations as Instytut Polonika to promote the nation’s cultural heritage abroad. 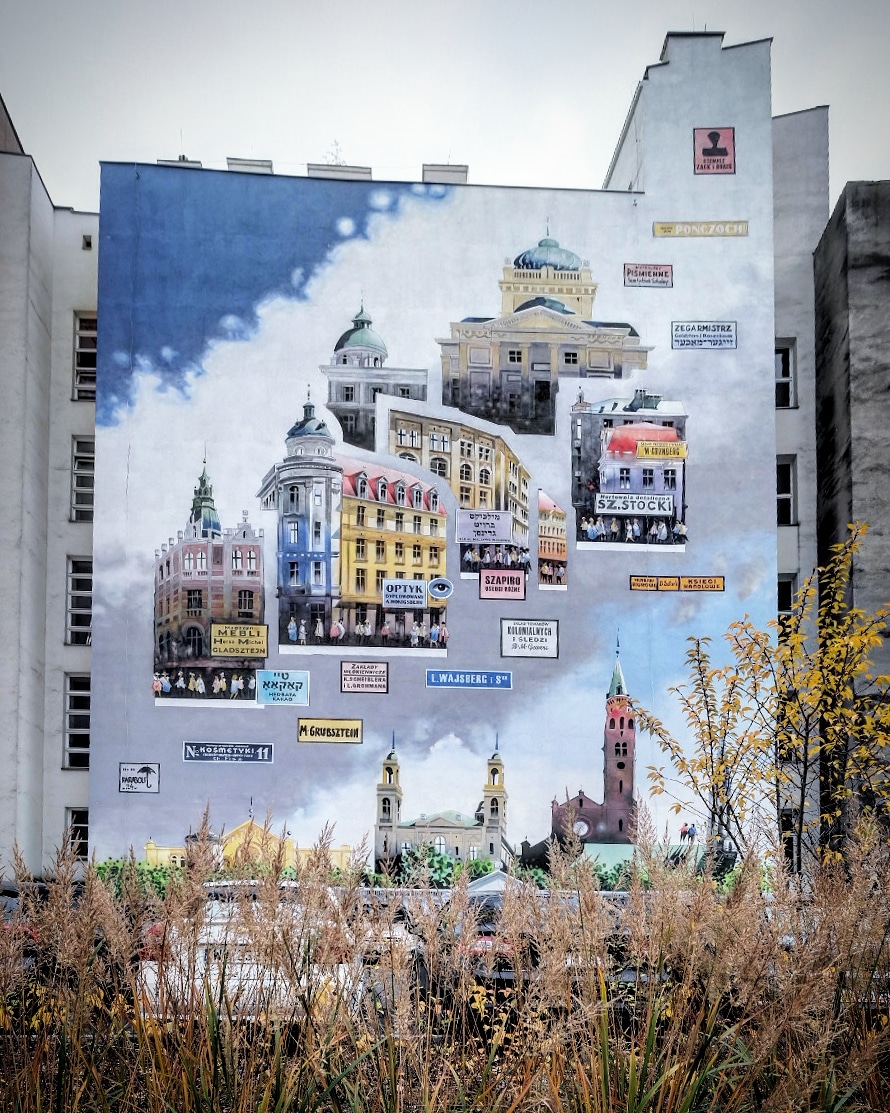 Financed through the city’s participatory budget, the idea for a mural was first suggested by Bartłomiej Gołąbek.Kalbar/TFN

Commonly accepted as one of the country’s best-loved artists of the contemporary era, the last couple of years have seen the artist broaden his portfolio in the most literal sense possible with the unveiling of several historically-inspired murals across Warsaw.

The latest, found on Próżna 12, pays tribute to the city’s vanished Jewish quarter with the gravity of the subject influencing a slight change of style from the artist himself. 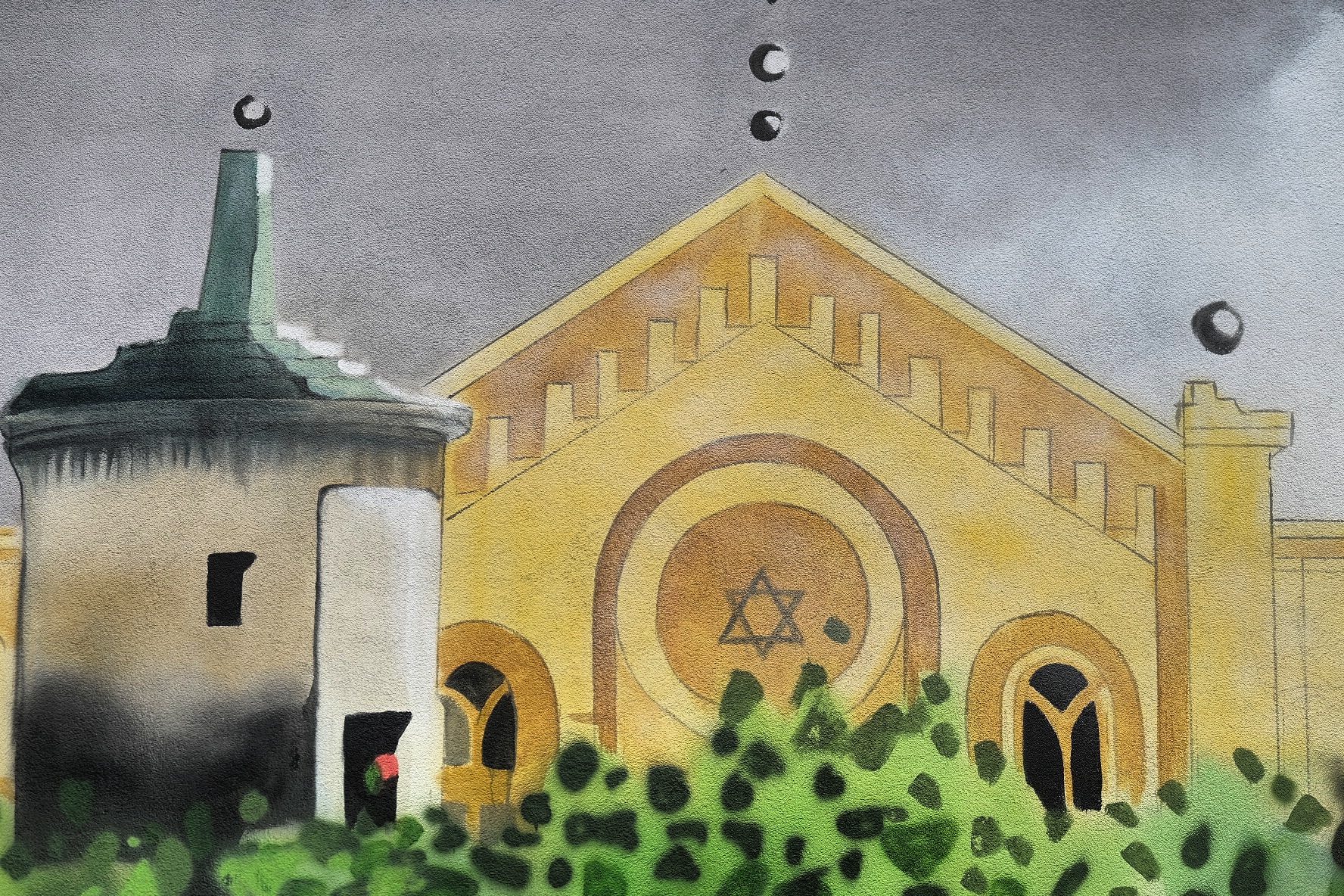 The work also features a handful of buildings that survived the razing of the Ghetto, among them the Nożyk Synagogue and Gruba Kaśka.Kalbar/TFN

“The entire district,” Brzozowski tells TFN, “together with its inhabitants, customs and everyday life, has irretrievably disappeared from the city’s plan and that irreversibly changed the character of Warsaw. Now, it’s also disappearing from our collective imagination. Obviously, the subject of extermination is very traumatic so I felt topics related to that had to be treated in a special way.”

Lacking his usual light-hearted elements, Brzozowski’s latest mural instead throws its focus on the structures that were lost when the Nazis methodically demolished the district following their brutal suppression of the 1943 Warsaw Ghetto Uprising.

Working under the close supervision of Brzozowski, the mural took three painters around three weeks to complete.Kalbar/TFN

“I wanted to present a harmonious scene depicting the former area,” he says. “I showed important and characteristic buildings such as the Great Synagogue on ul. Tłomackie as well as the Simons Passage shopping centre. In addition, I included the kind of tenement houses that typified that district and were the essence of its life.”

Floating above the city as if they were a dreamy memory, these landmarks are complimented underneath by a selection of buildings that survived, among them the Nożyk Synagogue, Gruba Kaśka on Tłomackie and the Church of St. Augustine which famously soared over the rubble and ruins of the Ghetto after its liquidation. 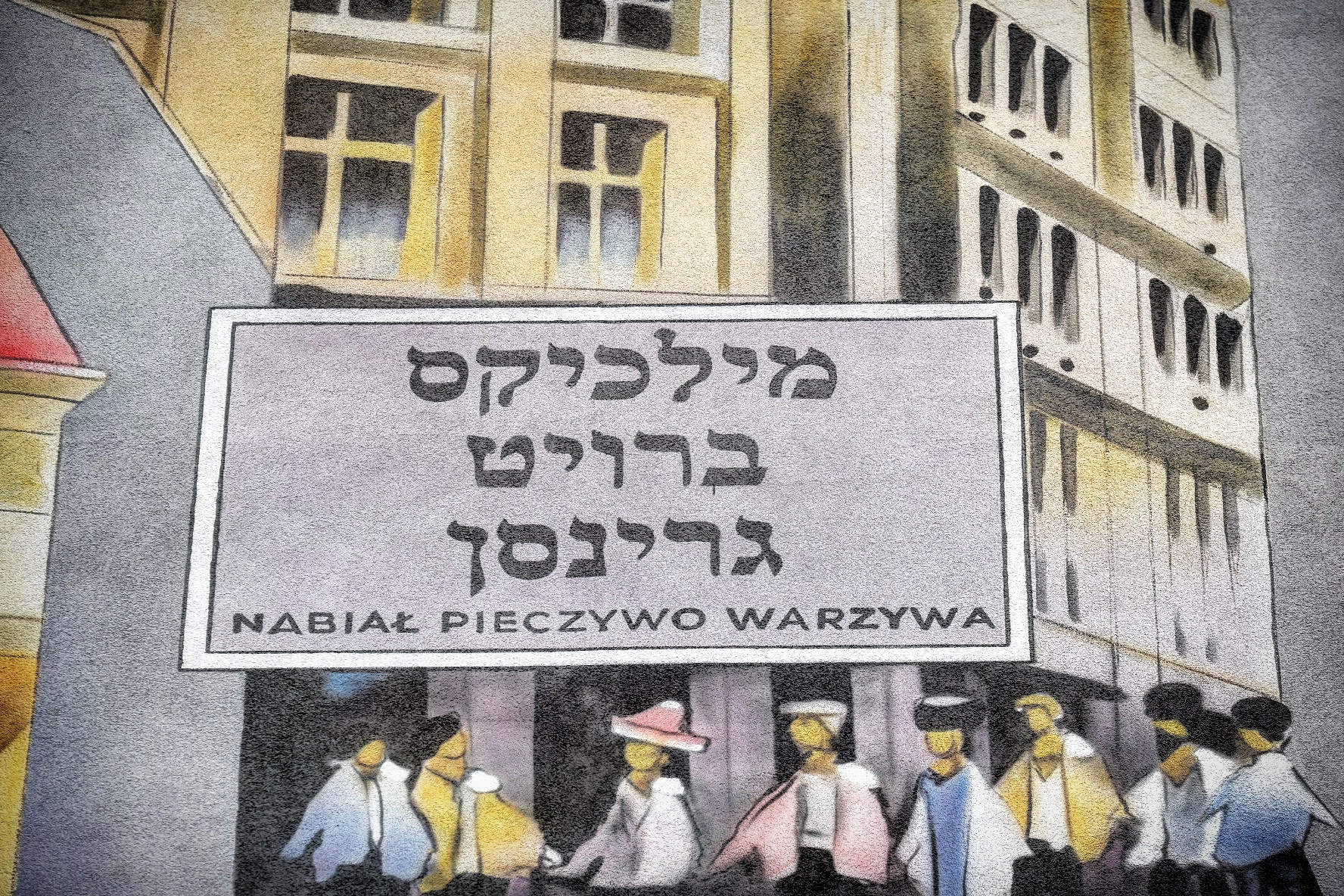 To ensure the mural’s historical accuracy, the artist researched photo archives and also consulted the Faculty of Jewish Studies at Jagiellonian University.Kalbar/TFN

Financed through the city’s participatory budget, the idea for a mural was first suggested by Bartłomiej Gołąbek and, in turn, it took three painters working under Brzozowski’s supervision three weeks to complete.

“The wall we worked on turned out to actually be very wavy,” says Brzozowski. “That can’t be seen at first glance, but that really impacted our work at the beginning – it made it quite difficult for us to copy my original drawing.” 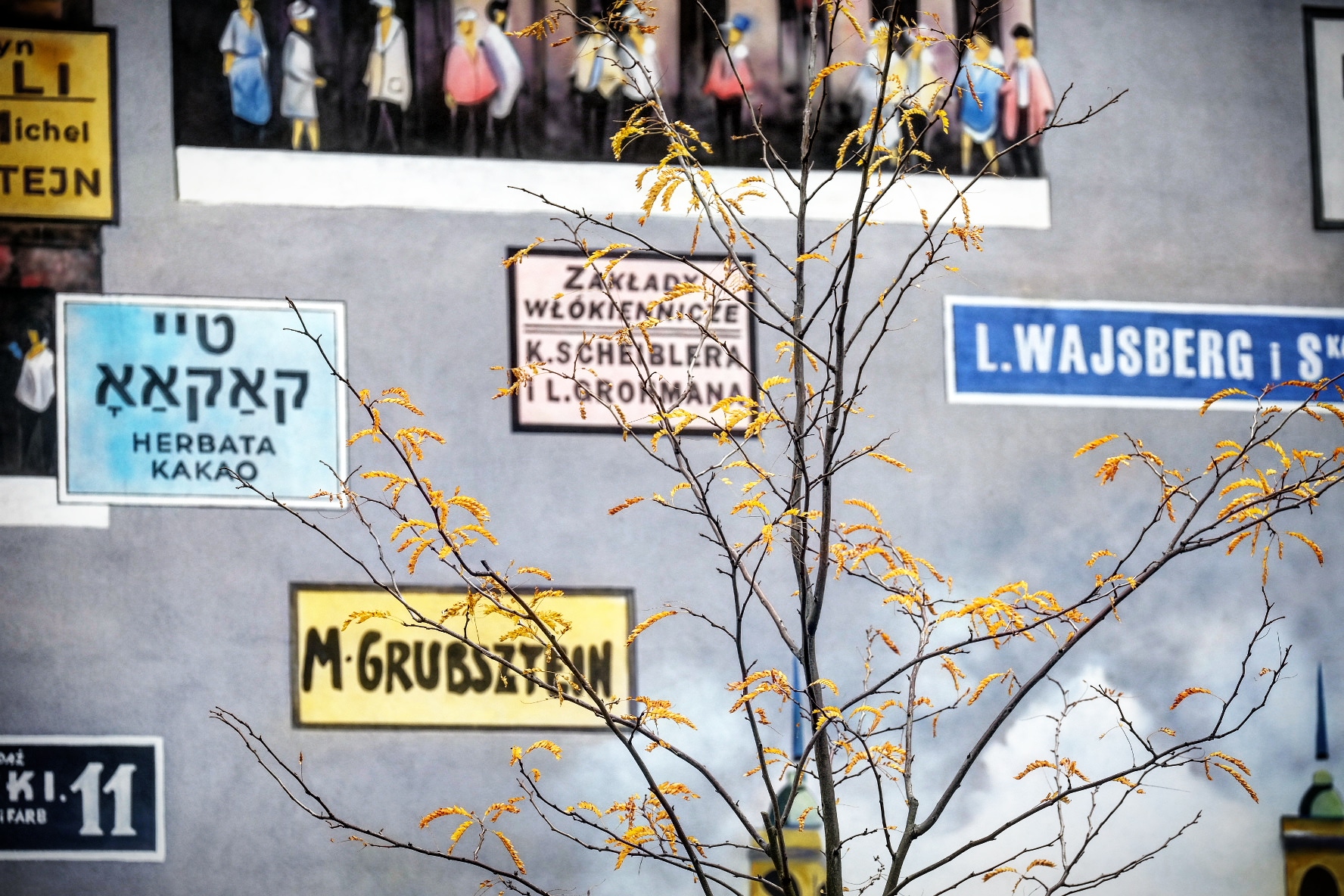 To reflect the bustling nature of the pre-war district, Brzozowski added a number of street signs that would have typified the area.Kalbar/TFN

The location, however, was by no means accidental.

“Próżna was very much part of the Jewish district,” explains Brzozowski, “and it’s especially important given that there’s almost nothing original left of the area. It’s a fragment of old Warsaw, lined with historical tenements on either side, and that’s why it was chosen as the site to commemorate the life, inhabitants and unique atmosphere of this historic place.” 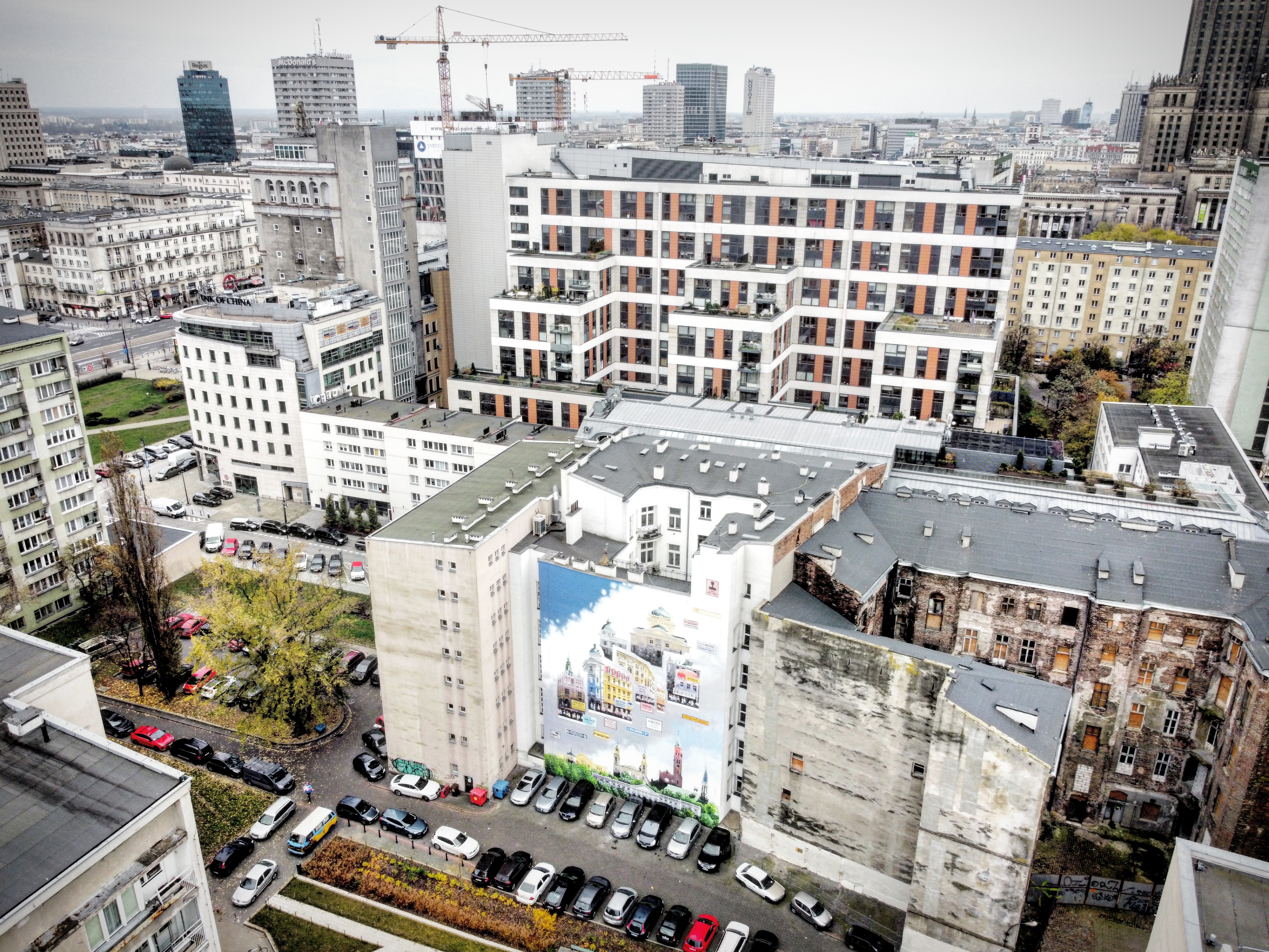 Lined with tenements that survived the Holocaust, the location was by specifically chosen for its historical importance.Kalbar/TFN

“It required me to carefully study old photographs of the area,” he says. “Old advertising signs are important elements of the mural and something I had to spend a bit more time on. 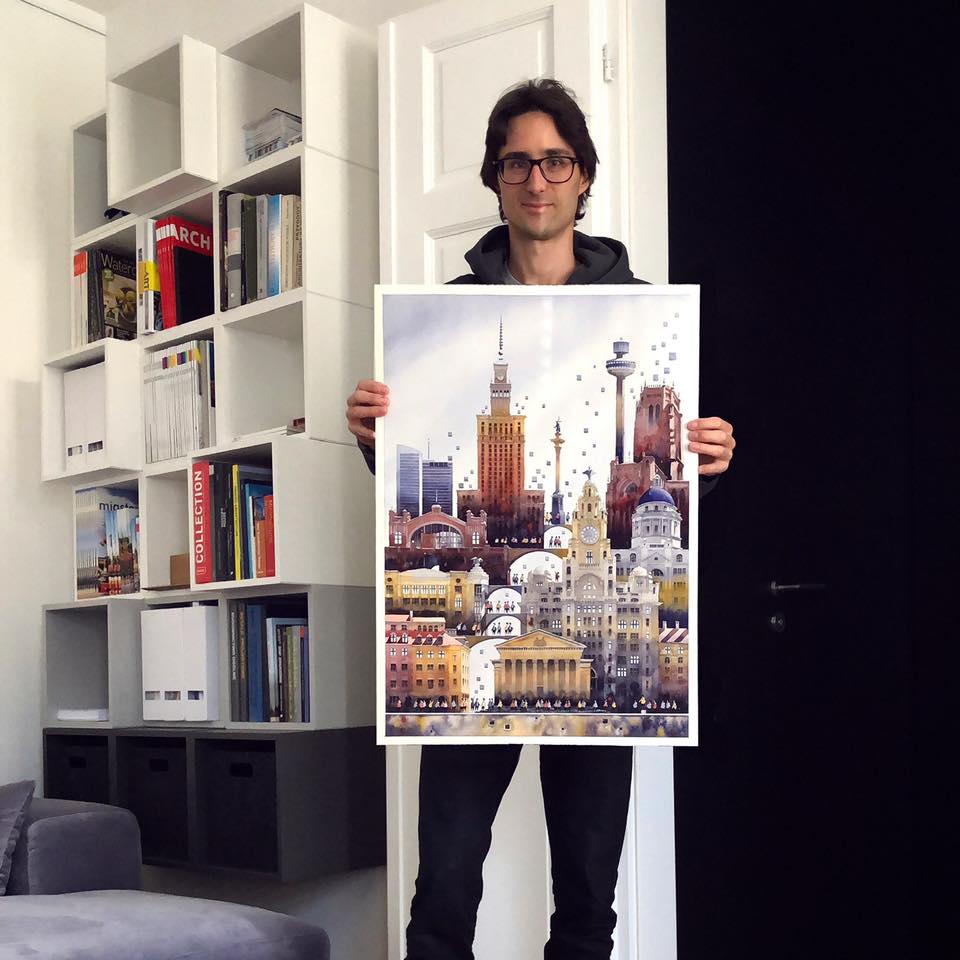 “The Jewish quarter was a bustling place, full of trade and services. In the old photos you can find lots of advertisements and signboards. I wanted to reflect that atmosphere, so in addition to including people in period costumes, I also added signboards on the project.

Working with Marek Tuszewicki of the Faculty of Jewish Studies at Jagiellonian University to ensure the Yiddish spellings and inscriptions were faithful, already this sensitive homage to the past has proved a firm hit with the public. 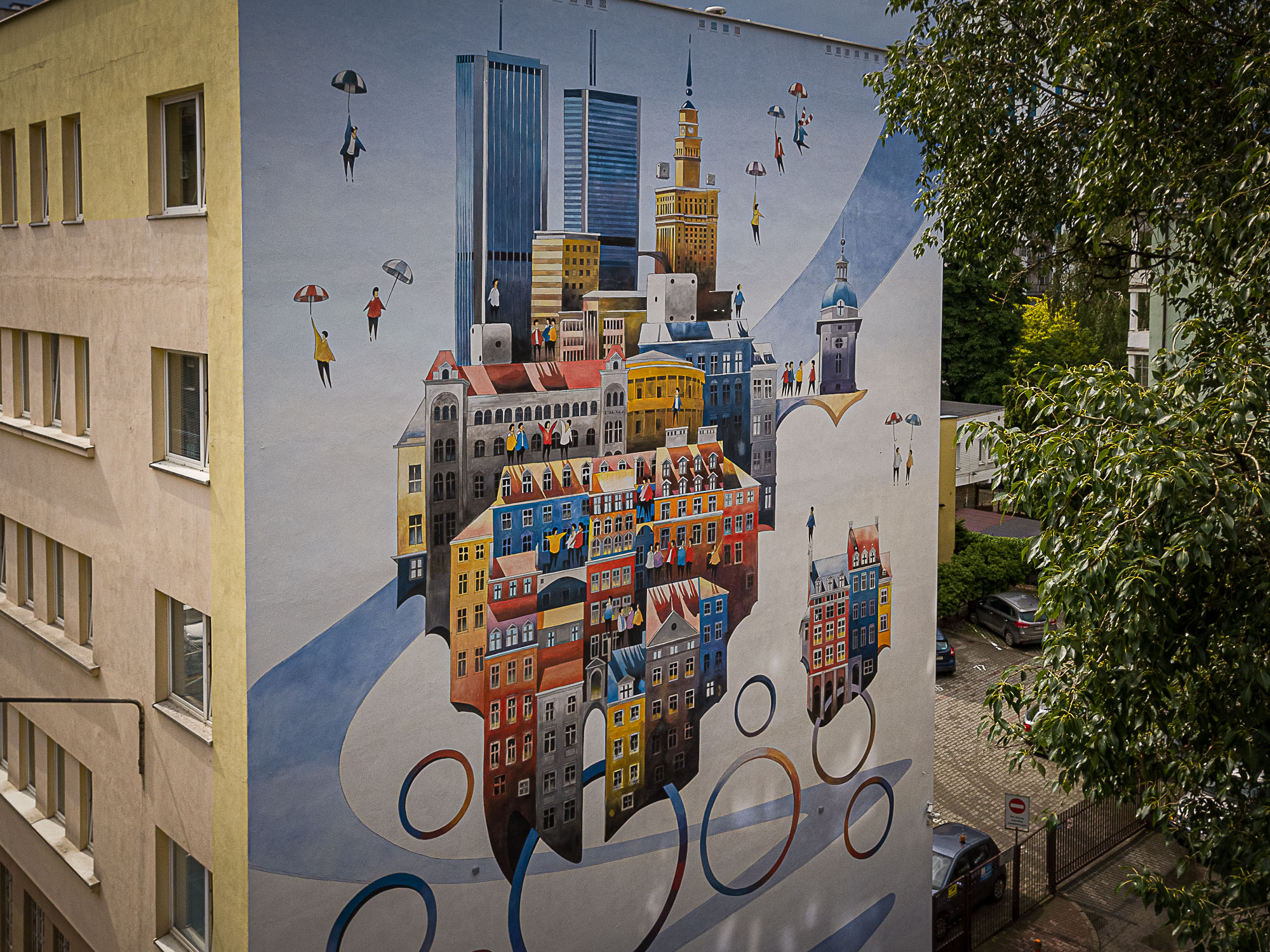 Previously responsible for three other large-scale outdoor murals, including this one on Chmielna, a fifth is now in the pipeline.Kalbar/TFN

For Brzozowski, meanwhile, it’s further evidence as to his successful transition into large-scale art. Having already authored three outdoor murals in Warsaw – one commemorating Polish independence, another lionizing the history of Wola, and another on Chmielna showcasing the contrast between old and new Warsaw – a fifth is now apparently in the pipeline.

“Street art and murals can have a huge value,” he concludes. “They can celebrate events, people or a district’s heritage, become a tourist attraction or a symbol of the neighbourhood. They can bring together communities or reflect the soul of a city.”