Sing it loud for Singer! Once dark and neglected, the former centre of Jewish life in Warsaw now echoes to the sound of life and laughter

While Gdańsk counts down to the sombre business of commemorating the outbreak of WWII tomorrow, Warsaw, in contrast, is readying itself for one of the biggest celebrations of its cultural year. Culminating with live outdoor concerts, the annual Singer Festival reaches its climax on Pl. Grzybowski this Sunday, with the extraordinary party atmosphere serving as a defiant battle cry from a Jewish community all but eradicated during the war.

Now in its 16th year, the event has drilled itself into the city’s DNA, and simultaneously played no little part in regenerating an area that had felt lost and forlorn.

“It’s developed dramatically,” says Adam Baruch, the director of the festival’s jazz side. “From being largely limited to the few insiders that knew about it, it’s rapidly expanded into one of Europe’s top festivals.”

This is by no means hyperbole. “I can’t think of any festival in the world that’s as versatile as this,” continues Baruch. “When you look at it, every possible form of culture is represented: literature, poetry, film, music, gastronomy, dance, etc. For decades we almost had no Jewish culture here, and although it’s been a rocky ride, we’ve now got a festival that stands up on an international level – in fact, plans are in the pipeline to even take this festival to New York.” 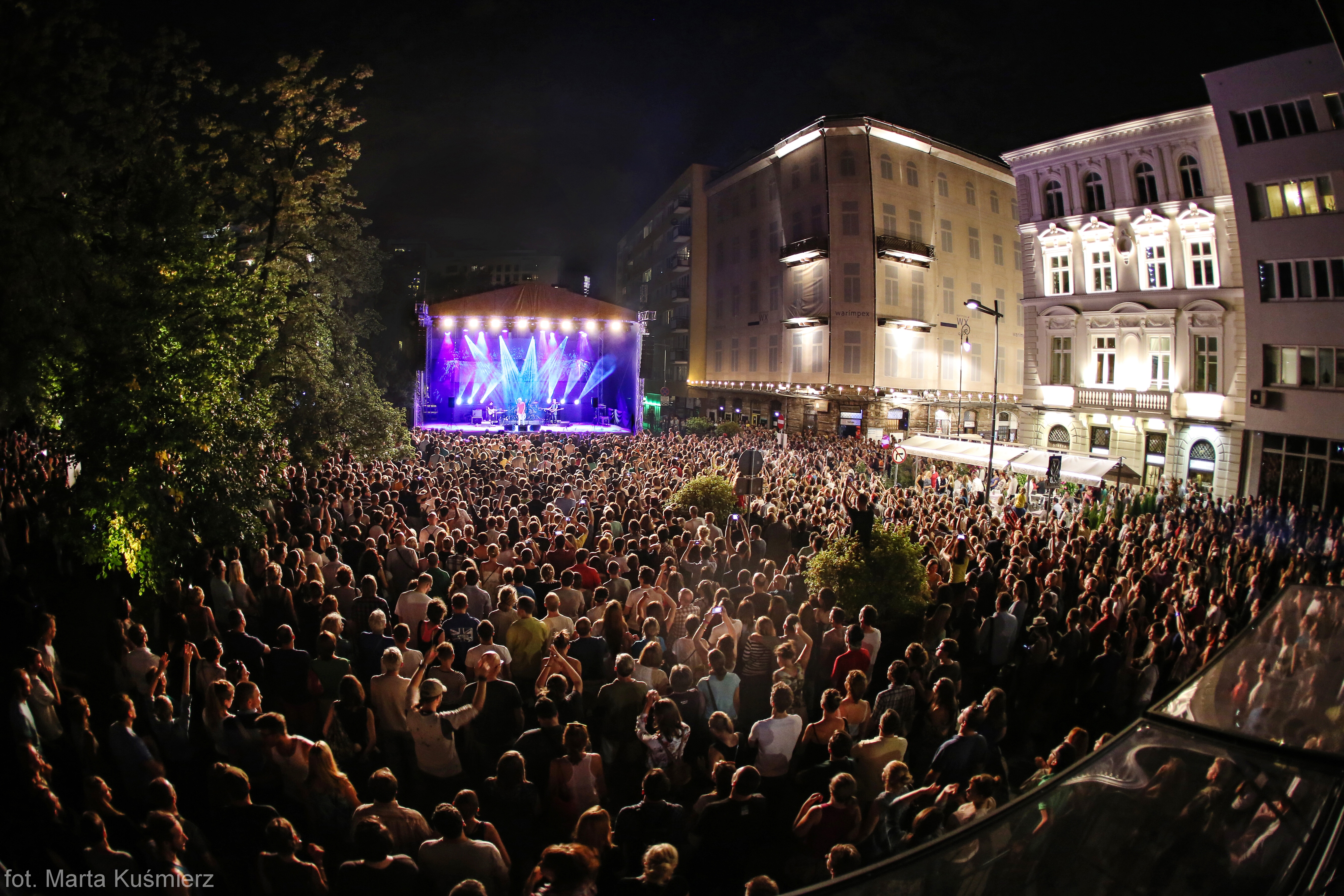 Particularly heartening, given some of the negative international press Poland finds itself subject to, has been the festival’s wide appeal to those native to the city. “Most of our guests aren’t Jewish,” says Baruch, “they’re simply Varsovians who have nothing to do with Jewish culture but clearly want to fill the void that’s been left behind.”

“You can sense there’s a longing for the past,” he adds, “and you can see that by our attendances. They’re phenomenal. Watching how emotionally involved these visitors become makes me incredibly proud, while as an event organiser, there’s nothing more satisfying than seeing a full house.” 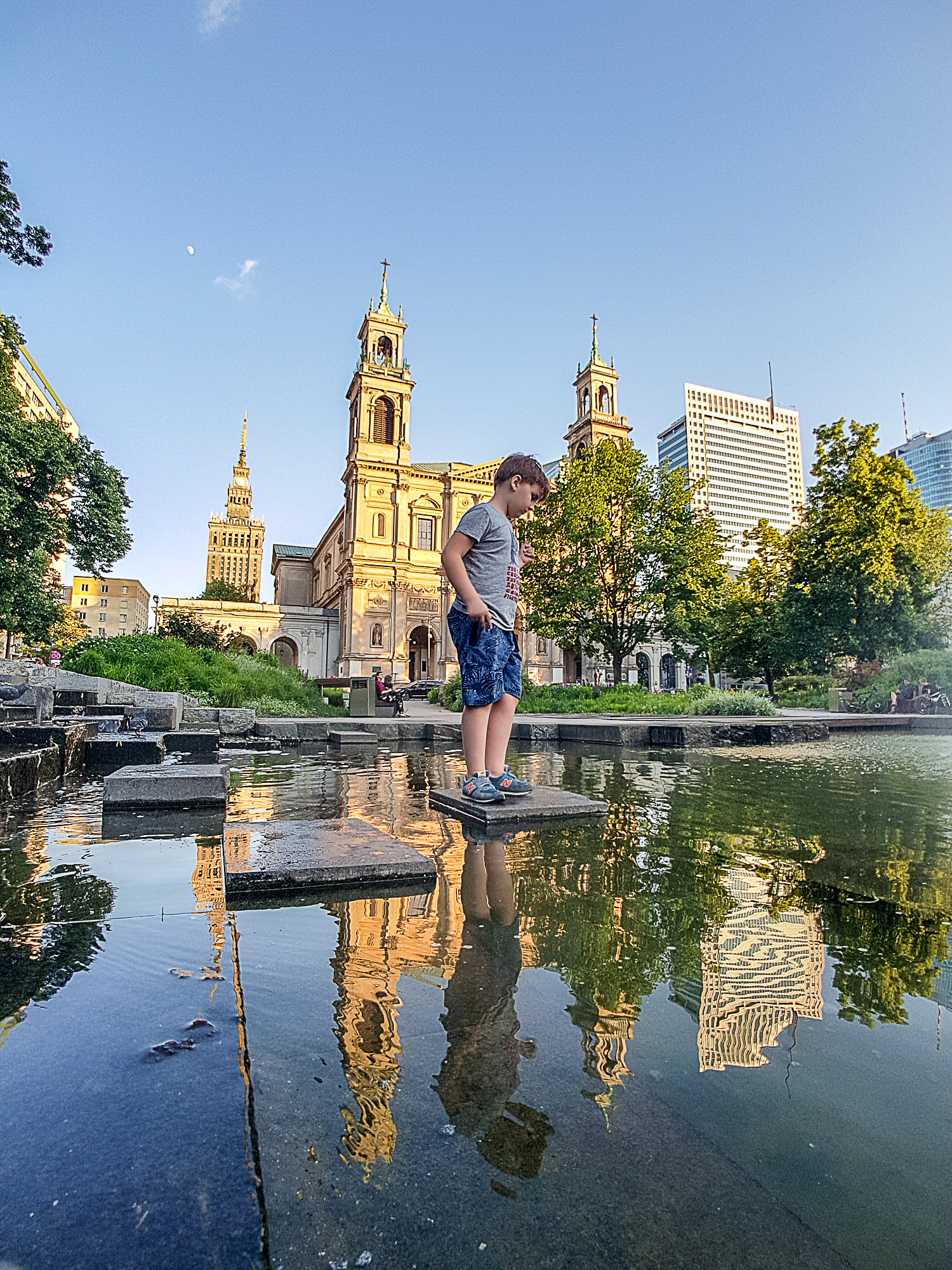 Plac Grzybowski has also benefited from a makeover.Kalbar/TFN

Playing more than just a passing role in the festival is the Austrian Cultural Forum, themselves partners since its inception.

“With our history comes a feeling of responsibility,” says Rupert Weinmann, the Forum’s director, “but by partnering with them we’re able to present an Austria that’s modern and forward-thinking.”

Aside from organising and hosting numerous events, part of the Austrian contribution has been a stunning book by Rafał Chwiszczuk documenting Próżna Street and its surroundings. Together with Pl. Grzybowski, it was an area that, says Weinmann, was once “the door to Jewish Warsaw.”

“This book,” continues Weinmann, “is our humble contribution to this area and its people both past and present.” 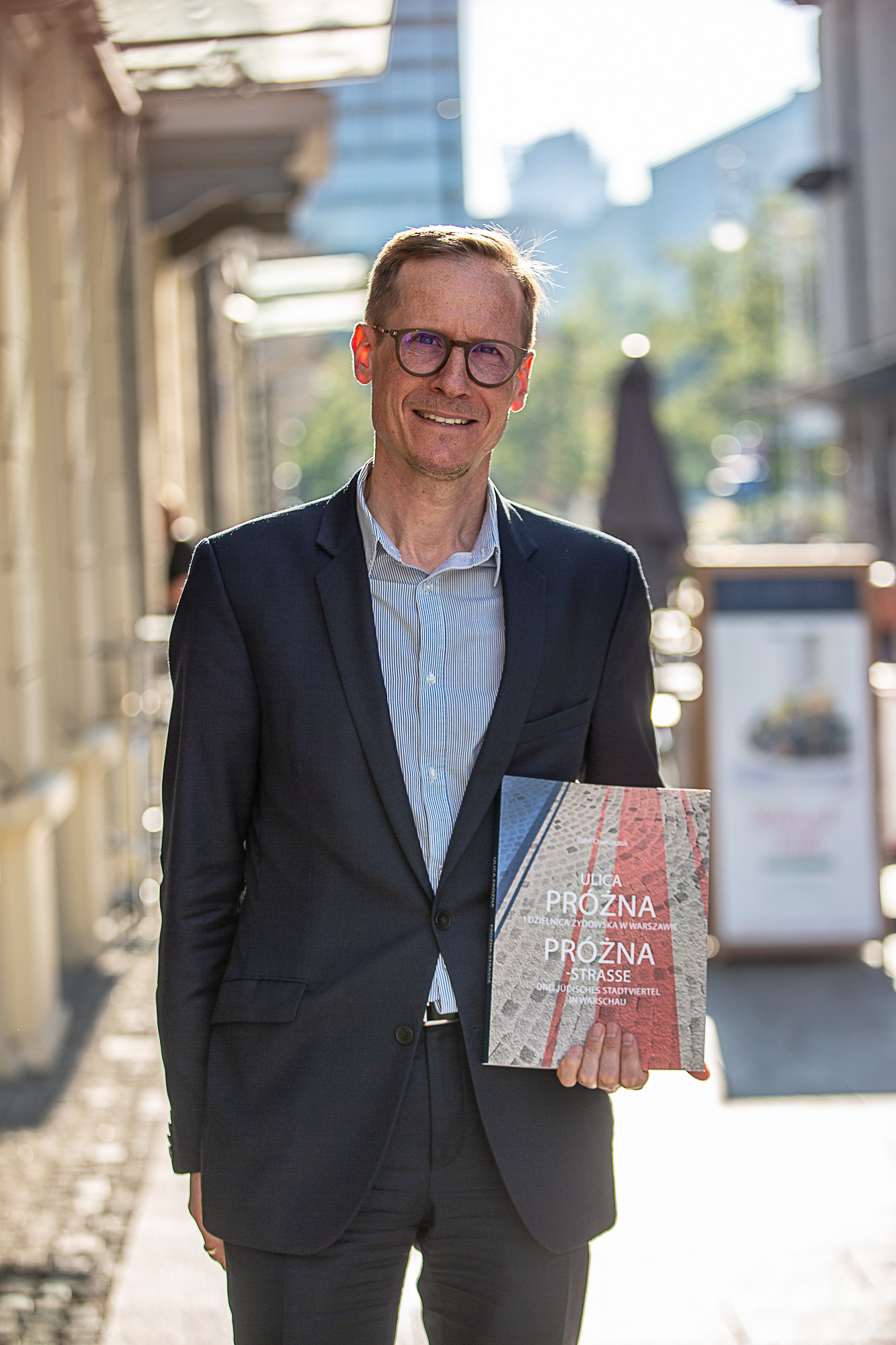 'With our history comes a feeling of responsibility,' says Rupert Weinmann from the Austrian Cultural Forum.Kalbar/TFN

As a micro-district, the area around Grzybowski and Próżna offer an insight into the unique patchwork of Warsaw, so much so that no shortage of tour guides use it as a base point for which to begin their tours.

“Take a look around,” says Rafał Patla of Adventure Warsaw, “and nowhere else presents the different aspects of Warsaw’s timeline better.” Standing in the centre of Grzybowski, you understand immediately what he means. Tsarist-era tenements brush against Communist carbuncles, former Jewish streets stand within earshot of grand Catholic churches. In the distance, skyscrapers loom, and so too the brooding menace of the Palace of Culture. It is Warsaw in a nutshell.

The area had been the melting pot of Warsaw, a place where, during the city’s pre-war heyday, Jewish life thrived alongside Russian and Polish. An important centre of trade, it was alive in the 19th century with a babble of European tongues. At a time when inter-community relations weren’t always the most cordial, Grzybowski was universal. It was a place to meet, work, live and worship. 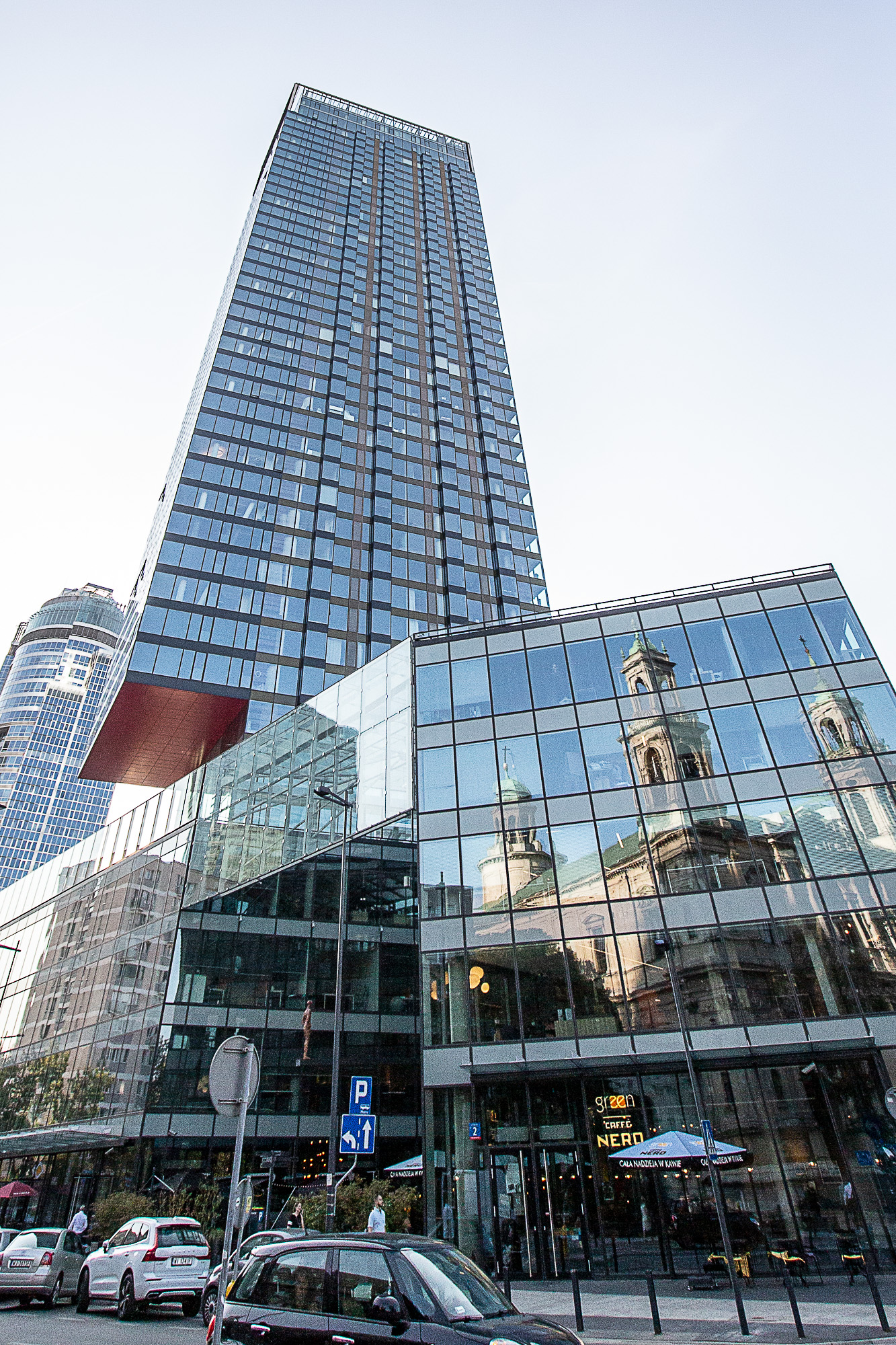 A modern block looms close to Grzybowska, a square that was once one of Warsaw’s ethnic melting pots.Kalbar/TFN

Traces of the latter survive, most notably in the shape of the All Saints’ Church at the bottom end of the square. Completed in 1893, its breath taking interiors are festooned with Catholic bling. Evidence of its continued importance can be seen on weekends, when solemn services are conducted to crowds of all ages dressed in their Sunday best. Said to hold 3,500, its capacity was tested to the max when Pope John Paul II and Mother Teresa visited in 1987.

With a lower profile, a honey-coloured synagogue lies to the west of the square, accessible via a couple of tight, twisty turns through back-alley carparks. As hard to find as it is, this synagogue – the only one in the capital to survive the Nazis – has been central to the community’s cultural rebirth.

And then, of course, there is Próżna itself. Hailed as Warsaw’s most authentic pre-war street, what was formerly a crumbling relic from bygone times (and the only surviving Ghetto street) is in the grip of restoration and gentrification. Where once strange smells emanated from long, deeps shadows, and pieces of shattered masonry crashed down at random intervals from above, today it acts as a stunning template for any city attempting regeneration. 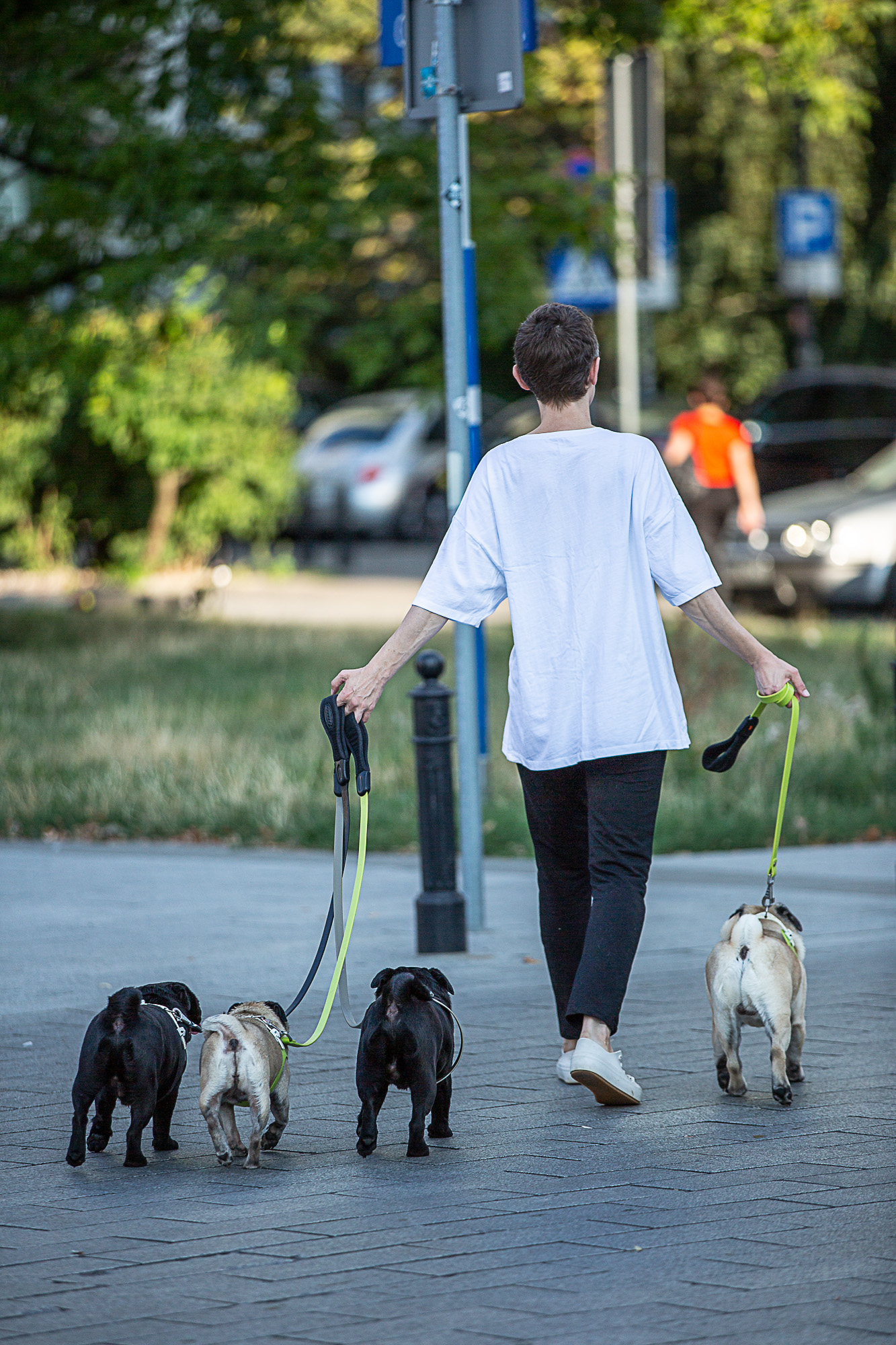 The area retains a residential feel despite its city-centre location.Kalbar/TFN

“Próżna survived the war, then Communism and finally the wild capitalism of the 90s,” says Weinmann, “but it just existed for decades, it never flourished. Now that’s changed.”

How much so is evident walking up it. Facades gleam wedding cake white in the summer sun, the ground units – once used by Jewish tradesmen – now turned over as bustling bistros. Striding business people and clip clopping models weave between map flailing tourists getting a hint at their bearings. Again, it is a place of life.

“It has gentrified,” admits Weinmann, “but I think that’s been in a positive way – there’s been a great effort to preserve, while the most of the changes that have happened have happened in the civil interest.”

The epicentre of Pl. Grzybowski itself is a prime example. Revived in 2010, what had hitherto been an overgrown park used primarily as canine lavatory, has been reinvented as a shining plaza filled with tinkling water features, benches, granite and greenery. It has been re-joined to the city. 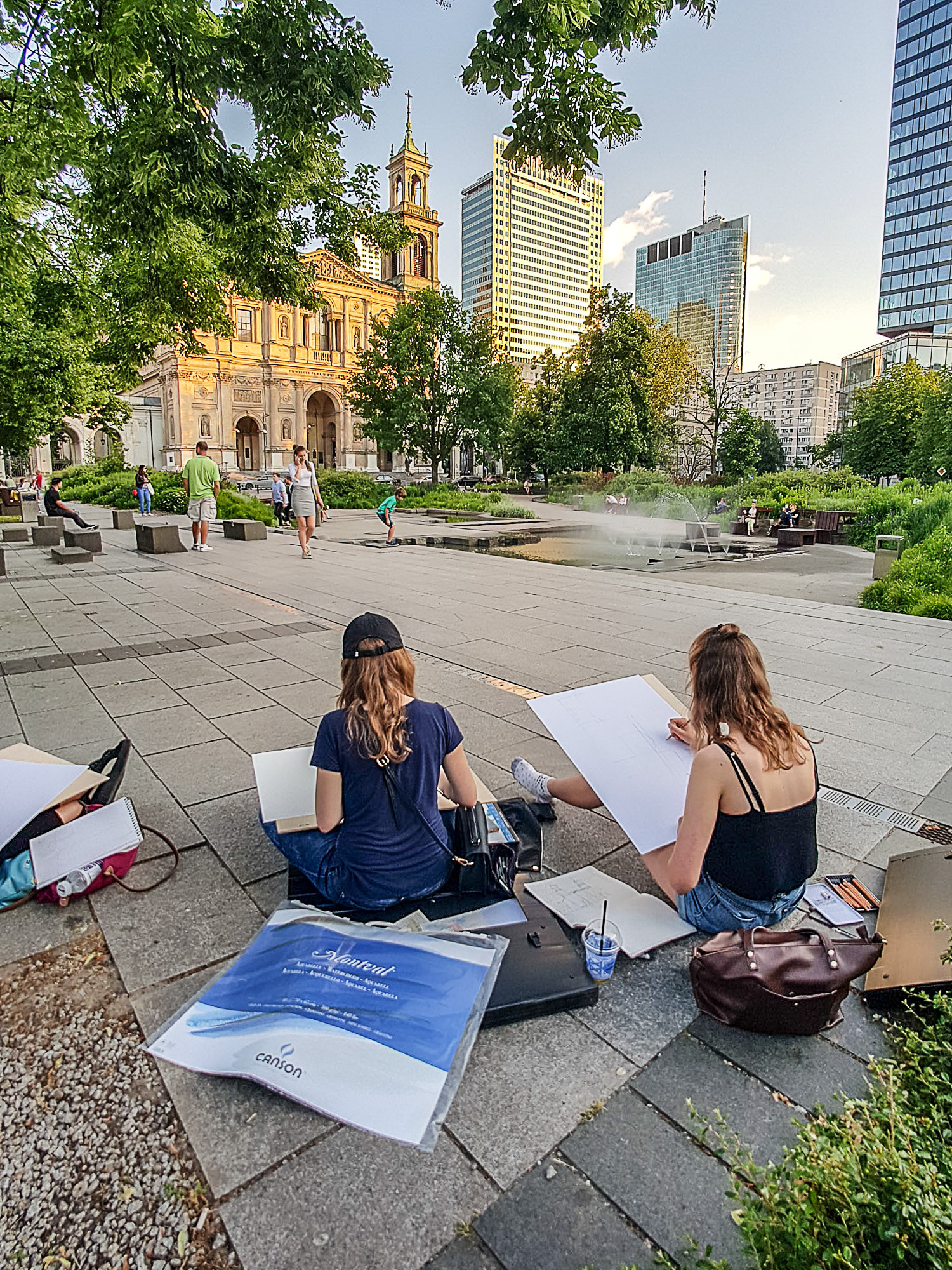 All Saints’ Church is said to be able to hold 3,500 people.Kalbar/TFN

And still, the rich contrasts stack up: hardware stores selling buckets and mops vie for business next to stores selling wine and French-style pastries.

In the background, Helmut Jahn’s towering Cosmopolitan building is a magnet for the rich and famous, its ground floor featuring a public space dominated by an artistic installation by the Israeli Erkan Shakine: featuring a man and a woman on opposite ends of a 20-metre beam, it see-saws in the wind, symbolic of the ups and downs in male-female relations. Pondering this, or maybe not, well-heeled women in impossible heels snack on ceviche made by an award-winning Argentinean chef.

Warsaw, you realize, has changed – and this little area demonstrates it better than most.

Still, however, it maintains a little snap of magic that makes it different to most. “There’s an intense feeling of timelessness,” says Weinmann, “and that culminates each year with this festival when you see the crowds flocking down the street.” Visiting the festival, if only for the day, one is inclined to agree.