Secret notebook filled with poems by prisoners donated to Auschwitz

A notebook containing forgotten poems composed in Auschwitz has been donated to the Auschwitz Museum.

“It is indeed an extraordinary volume of poetry, which is a testimony to the fact that for those imprisoned in Auschwitz, poems were a way to combat humiliation and dehumanization,' said Auschwitz Museum director Piotr Cywiński. 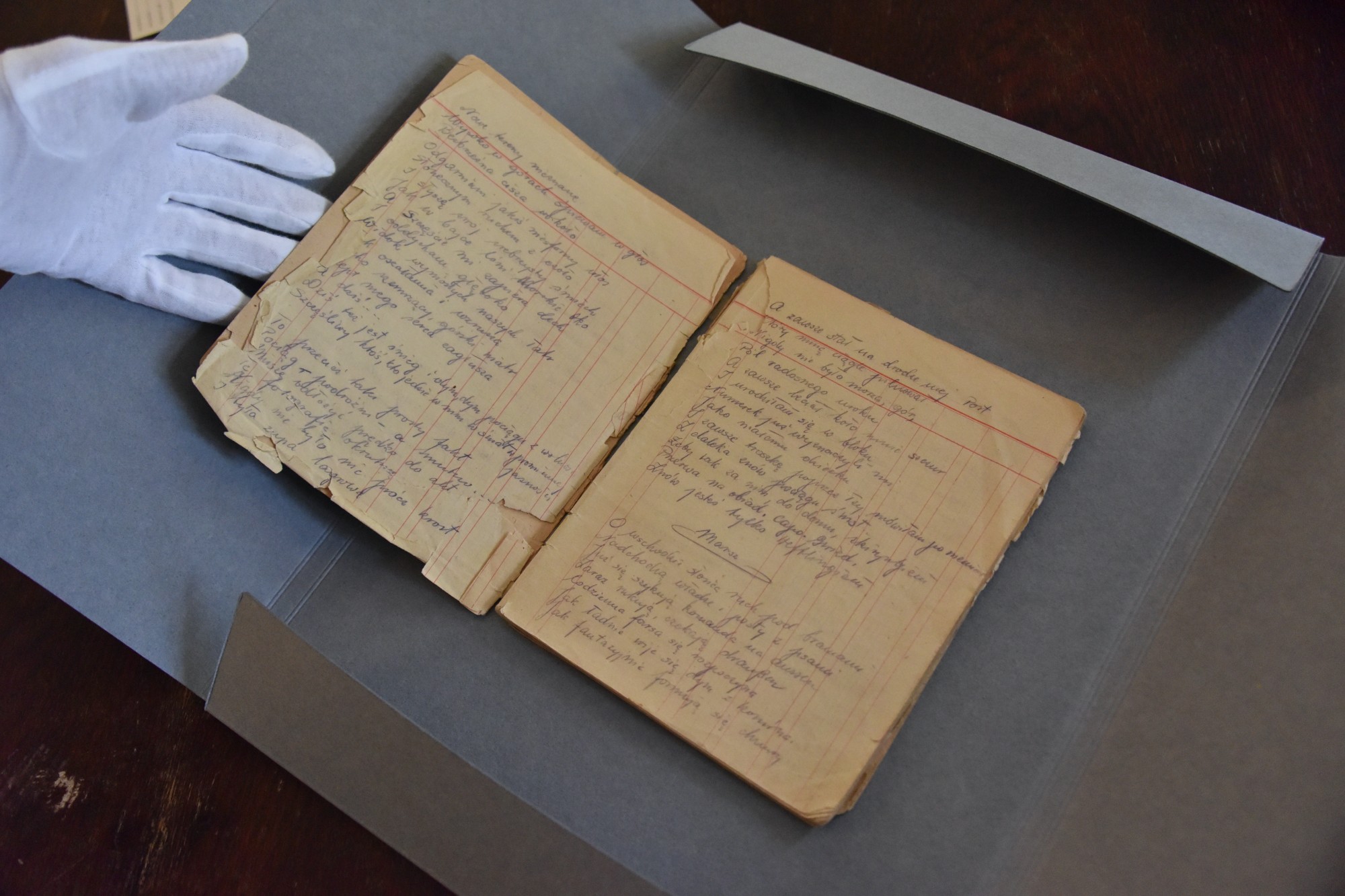 In their few free moments, female prisoners often recited from memory poems composed in the camp that they had overheard. These poems were then written down in the notebook.www.auschwtiz.org / Łukasz Lipiński

Keeping such a notebook at the Auschwitz II Birkenau death camp at the height of the extermination of 1.1 million Jews, Poles and other prisoners required great courage and determination and reflected the prisoners’ need for culture even during the darkest times.

“It is a testimony to the willpower to live and the attachment to culture, which were characteristic of female prisoners. Amid the horrible daily realities of the Birkenau camp, they found the strength and time to collect what was so ephemeral, lyrics of camp poems created by female prisoners as snapshots of immense suffering and longing for freedom,” said Dr. Wojciech Płosa, head of the Auschwitz Museum Archives.

Containing 32 pages with wide lines, the poems in the notebook were not written by Bożena Janina Zdunek, who had the surname Musiewicz during the war, but were the poems of other prisoners. 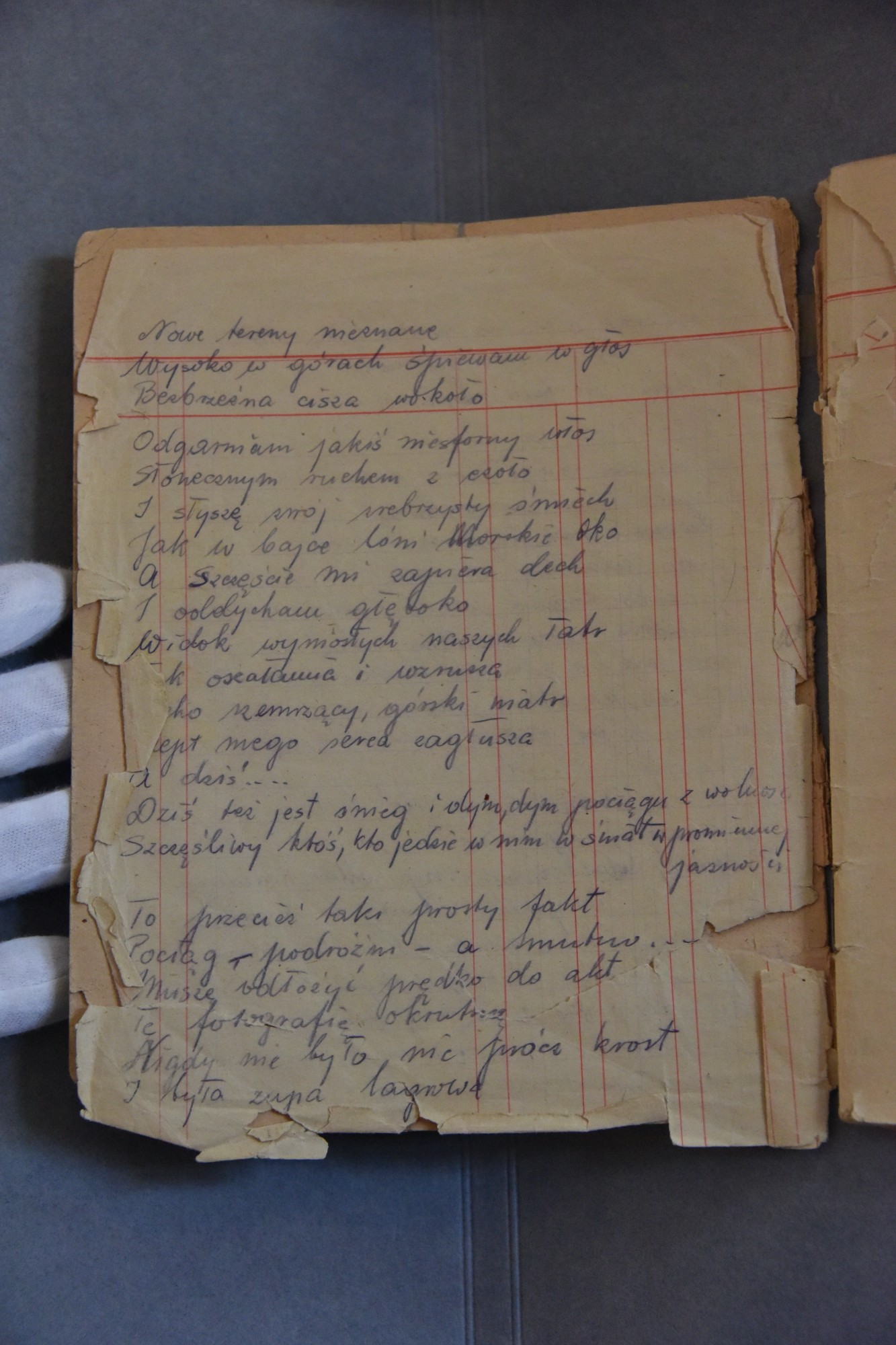 The origins of this extraordinary collection of camp poetry most likely date back to the autumn of 1943.www.auschwtiz.org / Łukasz Lipiński

She had two notebooks of this type in the camp; however, one of them was stolen from her along with a bag in which she kept her possessions.

Seventeen poems are contained in the notebook written in different handwriting. Some of them were composed by well-known Auschwitz poet Krystyna Żywulska. Her poems became especially important for her fellow prisoners with many of them memorized and passed on. 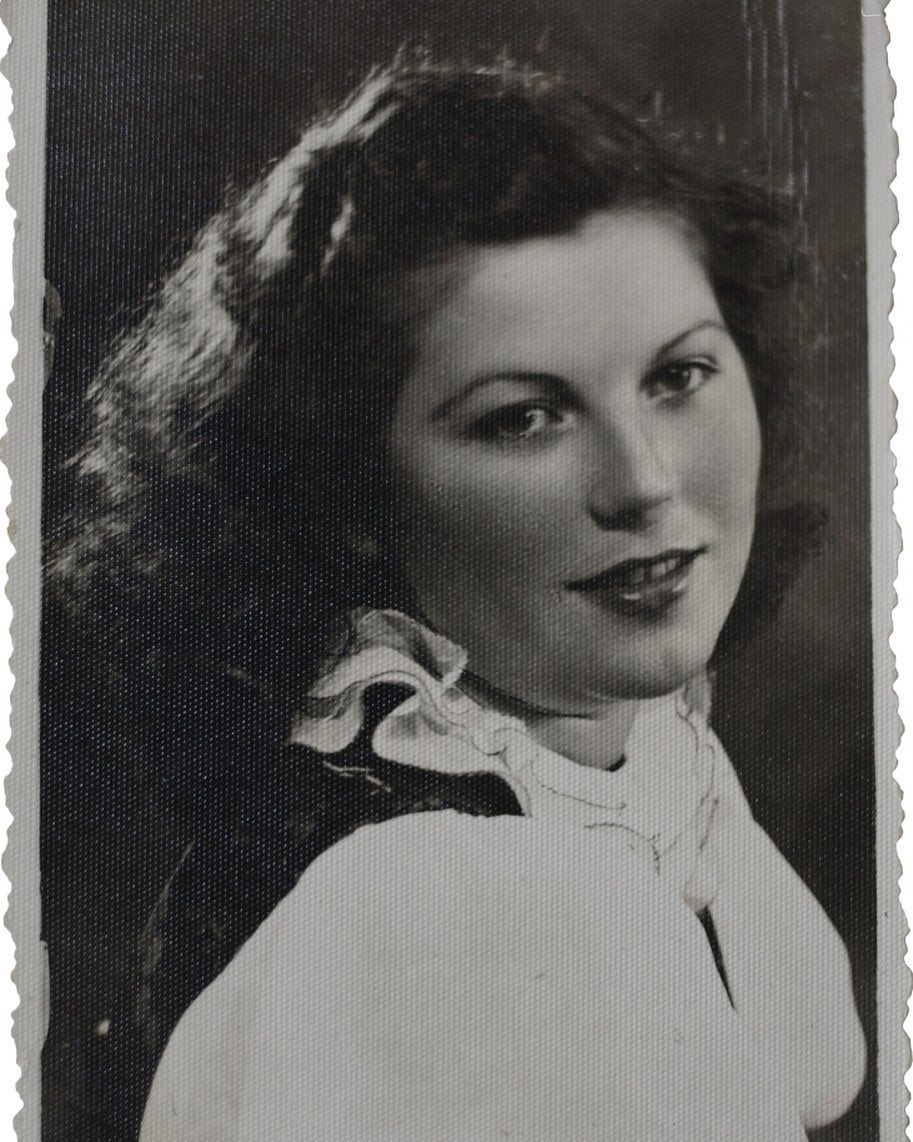 Born in 1918, Bożena Janina Zdunek was arrested and sent to Auschwitz on 22 June 1943 and later transferred to Ravensbrück.Polskainstitutet/Instagram

The origins of this extraordinary collection of camp poetry most likely date back to the autumn of 1943 and it was in the autumn of that year that Zdunek was taken to the camp hospital.

In their few free moments, female prisoners often recited from memory poems composed in the camp that they had overheard. These poems were then written down in the notebook.

It is not entirely clear how Zdunek came into possession of the notebook, though the inscription on its cover indicates that it was intended as a register of camp numbers of deceased female prisoners. 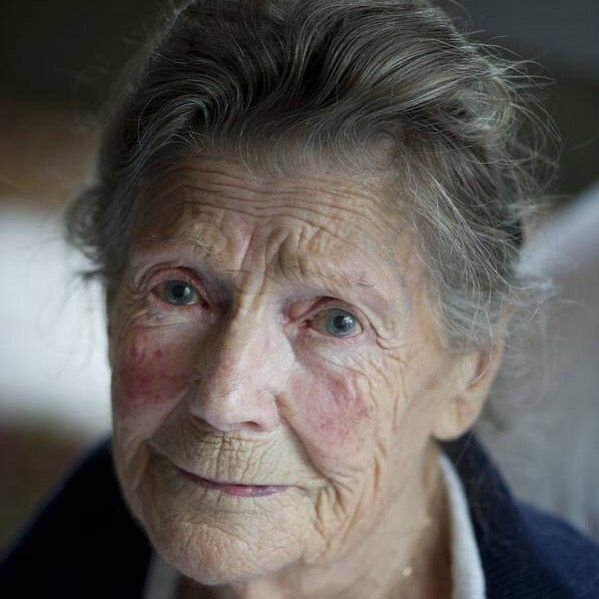 At the end of April 1945 she was rescued by a Swedish Red Cross operation and spent her post-war years in Sweden. She died on 2 June 2015 in Karlskrona.Polskainstitutet/Instagram

“Perhaps she managed to obtain this notebook thanks to the ingenuity and courage of the female prisoners involved in the camp resistance movement,” said Dr. Wojciech Płosa, head of the Museum Archives.

Bożena Janina Zdunek was born in 1918 in Volhynia. She was educated at the famous Krzemieniec High School, and after moving to Warsaw with her parents, she continued her education at the Queen Jadwiga Middle School. During the occupation she was active in the resistance movement. She was arrested and sent to Auschwitz on 22 June 1943.

She remained in the camp until the end of August 1944, when she was transferred to Ravensbrück. At the end of April 1945 she was rescued by a Swedish Red Cross operation and taken to Sweden. In 1948 she married Janusz Zdunek, a Warsaw insurgent and former prisoner of Stutthof concentration camp. 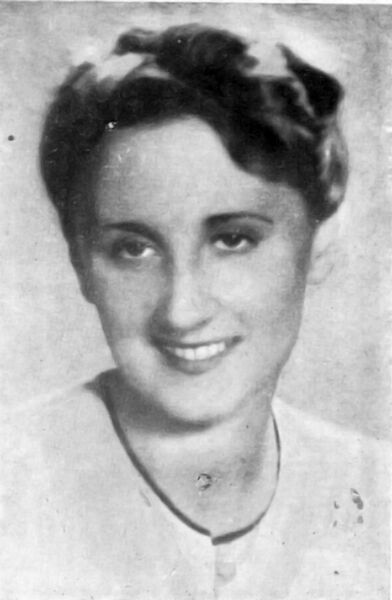 Among the works featured in the collection are poems by the well-known Auschwitz poet Krystyna Żywulska.Public domain

She lived in Sweden after the war and was a member of the Association of Polish Veterans. She regularly met with young Swedes to talk about concentration camps and the tragedy of World War II. She died on 2 June 2015 in Karlskrona.

After her death, her son decided to donate her notebook after first showing it to the director of the Polish Institute in Stockholm, Paweł Ruszkiewicz.

“We immediately agreed that it should be presented to the world on a broader scale because we owe this above all to Mr Zdunek's mother, the female prisoners, Mr Zdunek and his children,” said Ruszkiewicz. 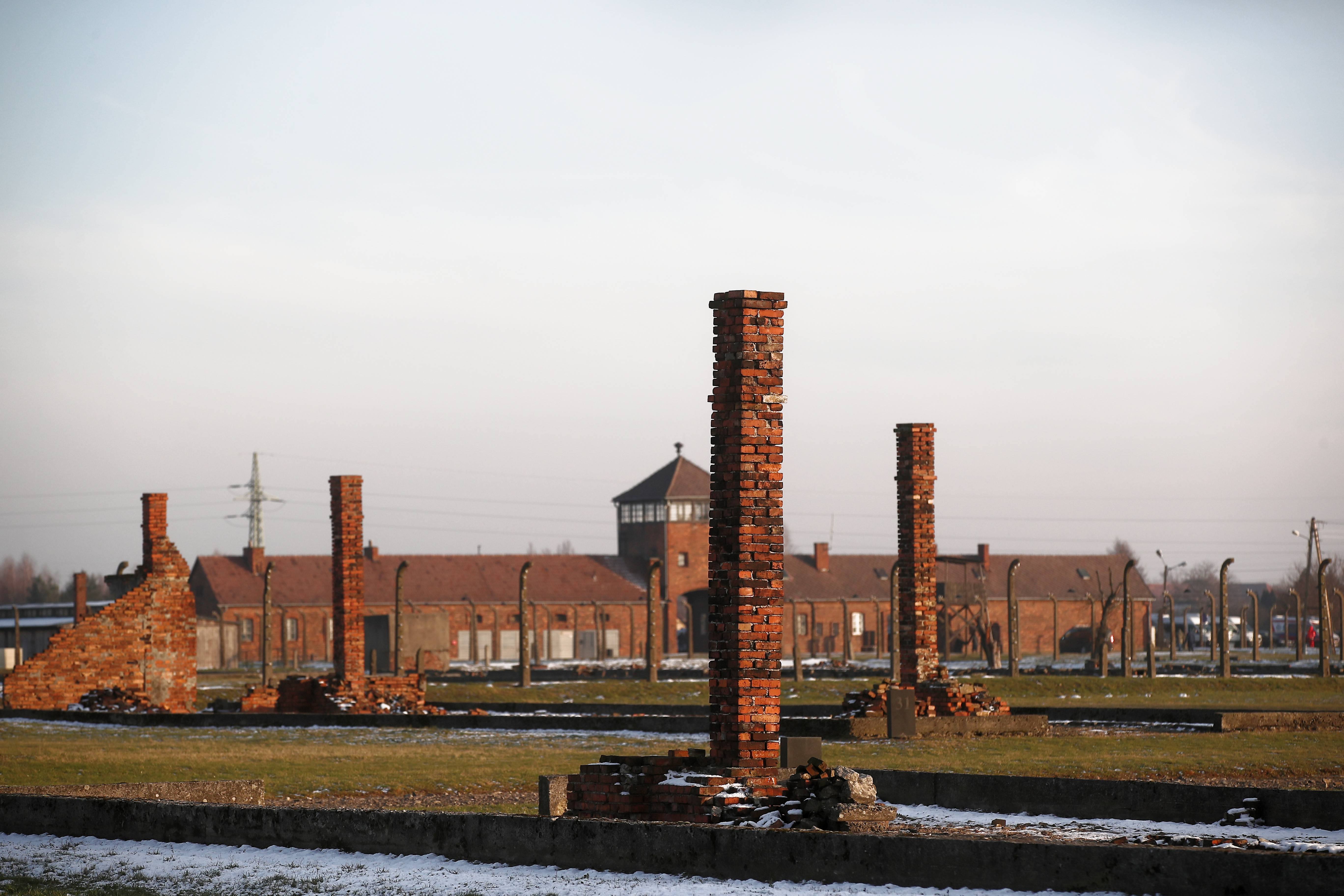 For those imprisoned in Auschwitz, poems were a way to combat humiliation and dehumanization.Łukasz Gągulski/PAP

Before sending the notebook to the Auschwitz Museum, it featured in an exhibition telling its story, which was organised by the institute in cooperation with the Swedish Red Cross.

On his decision to donate the notebook to the Polish institution, Professor Zdunek said: “The Auschwitz-Birkenau Museum is the largest museum institution and has the resources to ensure that such unique documents are treated appropriately. It is of particular importance to me that the notebook returns to the place of tribute to the victims.”