Tired of congestion, traffic fumes and noise, people in Warsaw are getting back to nature by learning the rural craft of cutting grass with a traditional scythe.

On Saturday and Sunday in the Warsaw district of Bielany, dozens of folk from all walks of life braved the autumn wind and rain to take part in a series of workshops to learn the ancient skill of cutting down long grass with a scythe.

The workshops, which were hugely oversubscribed, were led by permaculture expert and educator Ben Lazar from Permakultura.Edu.PL.

He told TFN: “People in today’s world want to return to their traditions and revive skills that are dying out.” 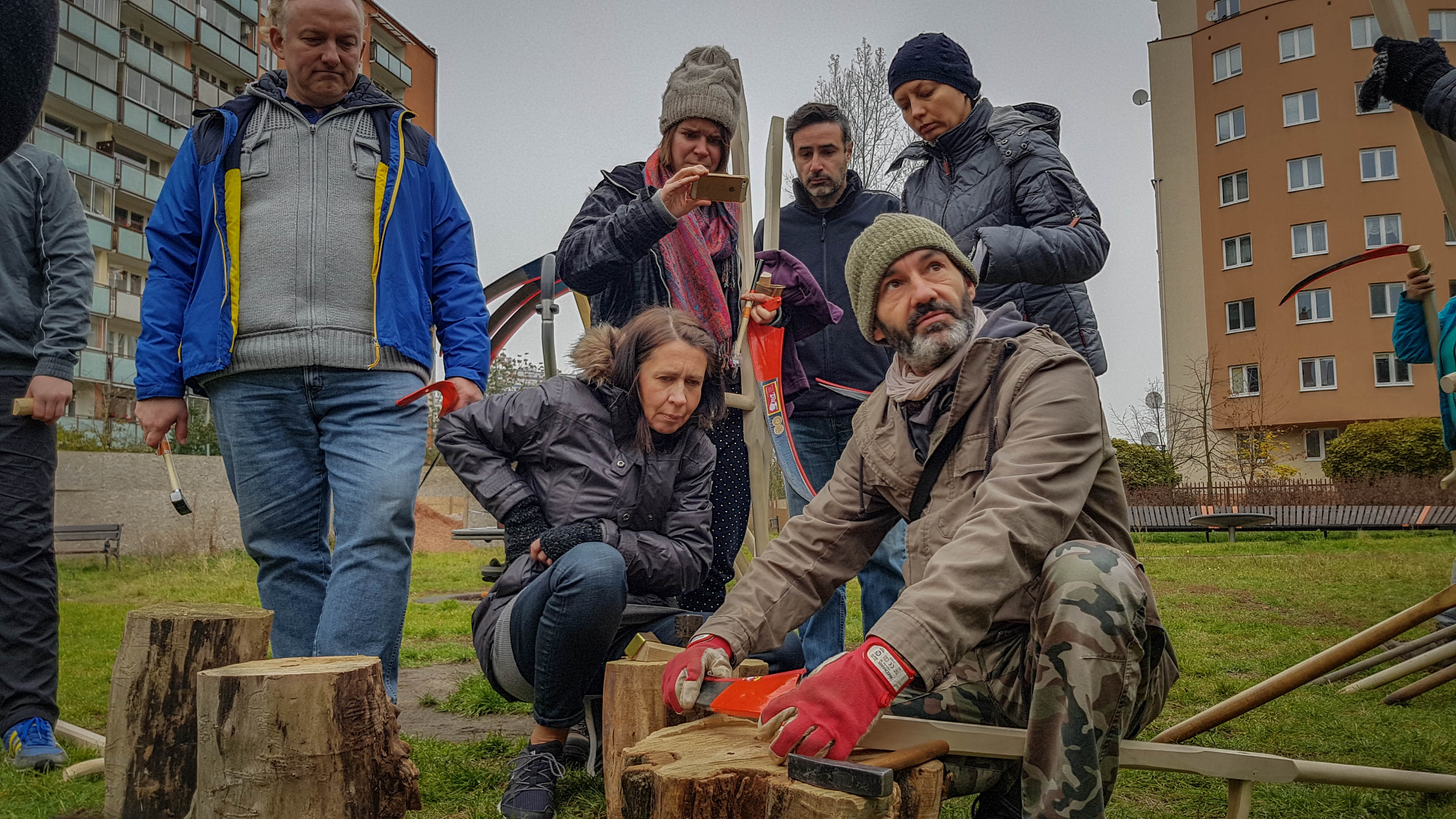 Organiser Karol Podyma (R) believes that the way grass is cut in the modern world is damaging to the environment.Kalbar/TFN

He explained to TFN: “A lot of people cut their grass up to ten times a year. This is too often. They also cut it too low, destroying habitats for insects and wild animals.”

“Also, by 2050, 70 percent of all people in the world will live in cities. Therefore, it is important for those people to be aware of traditional skills used in the countryside so that they that can be informed consumers when it comes to making choices about what foods to buy,” he added.

After learning how to put together the traditional tool, how to maintain the blade and some safety instructions, the group from Sunday’s workshop set about cutting some actual grass.

Paweł from Mokotów soon cleared an impressive area of grass despite the wet conditions as his wife Magda looked on admiringly.

“It’s alright when you get the hang of it,” he summarised.

“The important thing is not to chop, but to take low, smooth strokes,” he added. 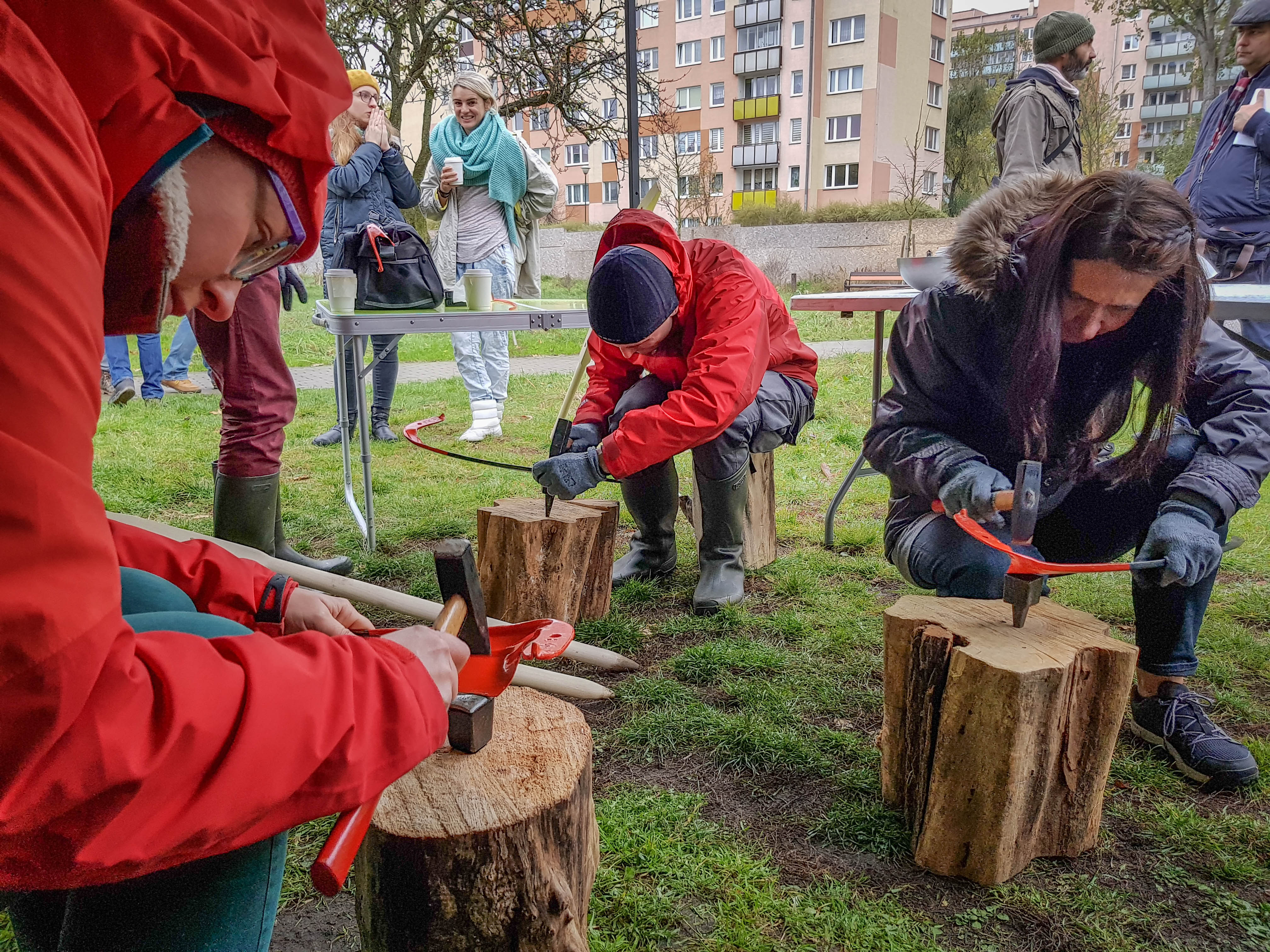 Participants learn how to put together the traditional tool, how to maintain the blade and some safety instructions. Kalbar/TFN

Local pensioner Eugenia, who was walking her dog, stopped to chat and find out what was going on.

“I think it’s a great idea. There are a lot less fumes and anything that is good for the environment should be done,” she told TFN.

“It’s also much cheaper that going to the gym,” she observed.

Most of those taking part were city dwellers who have become disillusioned with urban life and who are looking to escape to the country. Another group were people who have moved to the countryside from the city and want to live a traditional lifestyle.

Dominik Siwek from a village near Garwolin in Mazowieckie doesn’t fit into either of these groups, however.

“I have my own land back home and I plan to grow heirloom fruits and vegetables. I want to do everything in an ecological way,” He told TFN.

“The teacher Ben is really well-known in Poland among people interested in permaculture, so I wanted to come to listen and learn from what he has to say,” he added. 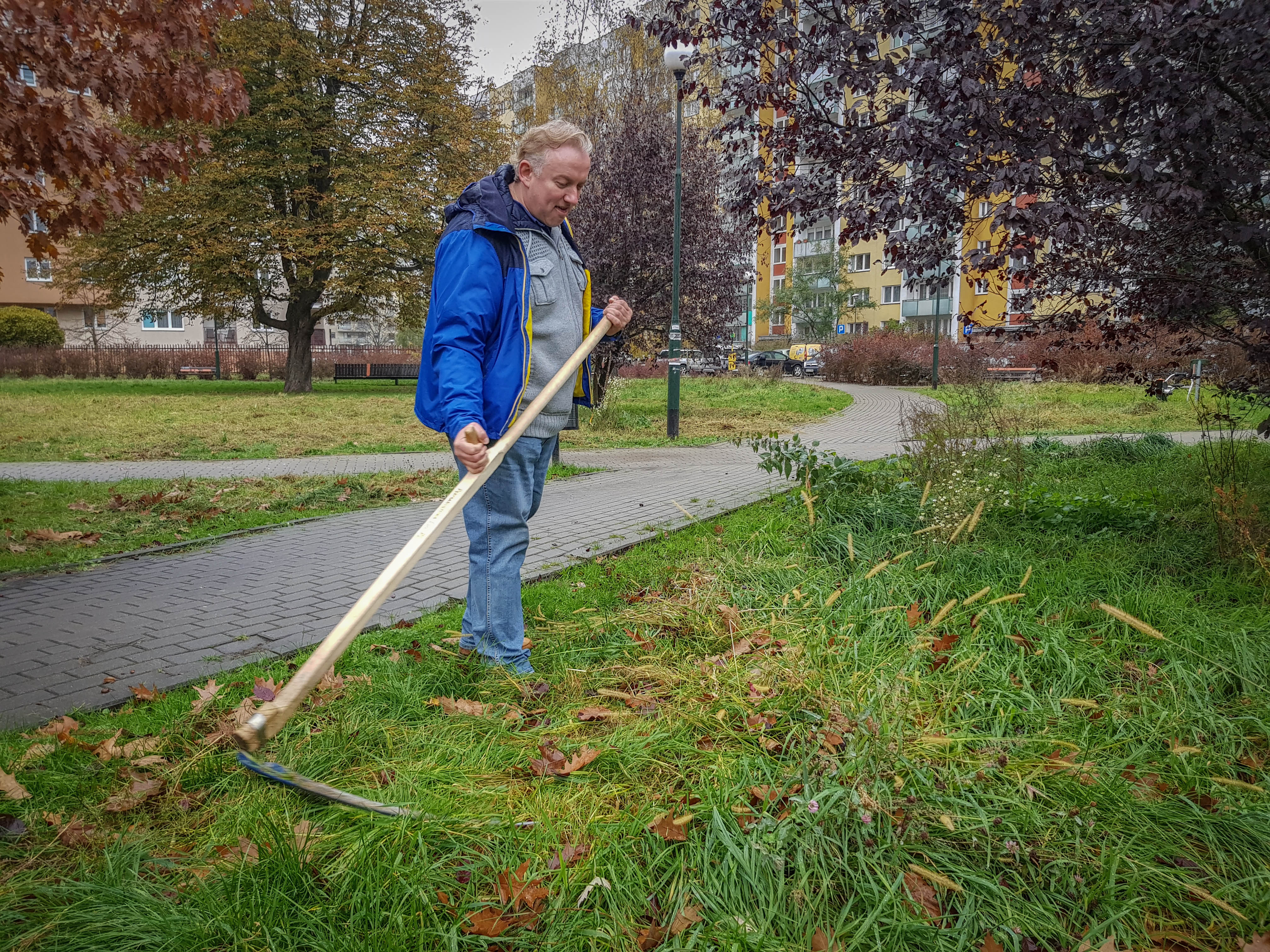 After the workshops people got down to cutting their own grass. And they will be able to do so at home too as all participants can take their scythes away with them.Kalbar/TFN

Other participants came from much further away. Angelo is from Portugal and with his partner Marta he plans to start a permaculture farm near Łódź. They are also applying for a licence to grow hemp, from which they plan to build a cottage.

“I think the approach to permaculture here in Poland is much more developed than in Portugal,” Angelo told TFN.

The ecological initiative was financed by the local authority in Bielany as part of the participation budget in which local residents can vote for projects they would like to see in their district.

“As you can see, the people of Bielany are very progressive and environmentally aware,” Anna Piasecka-Bułwan from the Bielany local authority told TFN.

The people who took part in the workshops over the weekend will be able to keep practicing their newly acquired skills, as all participants could take the scythe they were using home with them.

Mixing it up: artist blends history, legends and science fiction for spectacular results

Skeleton of 2,500-year-old Scythian warrior found buried in ‘Valley of the Kings’

Our house, in the middle of… somewhere. Architects design ‘hidden’ house