Russia should be banned from sports events, federations says official

A Polish presidential official has said that Russia should be immediately expelled from all sports competitions and federations.

Jakub Kumoch, the head of the Polish President's International Politics Bureau, made the statement on Sunday after Russian gymnast Ivan Kuliak caused outrage in a World Cup event after wearing a symbol supporting Russia's invasion of Ukraine on his shirt while sharing the podium with his Ukrainian rival.

"This is a symbolic image showing why Russia should be immediately expelled from all sports events and federations," Kumoch wrote on Twitter, adding that President Andrzej Duda had been one of the first to make such a proposal. 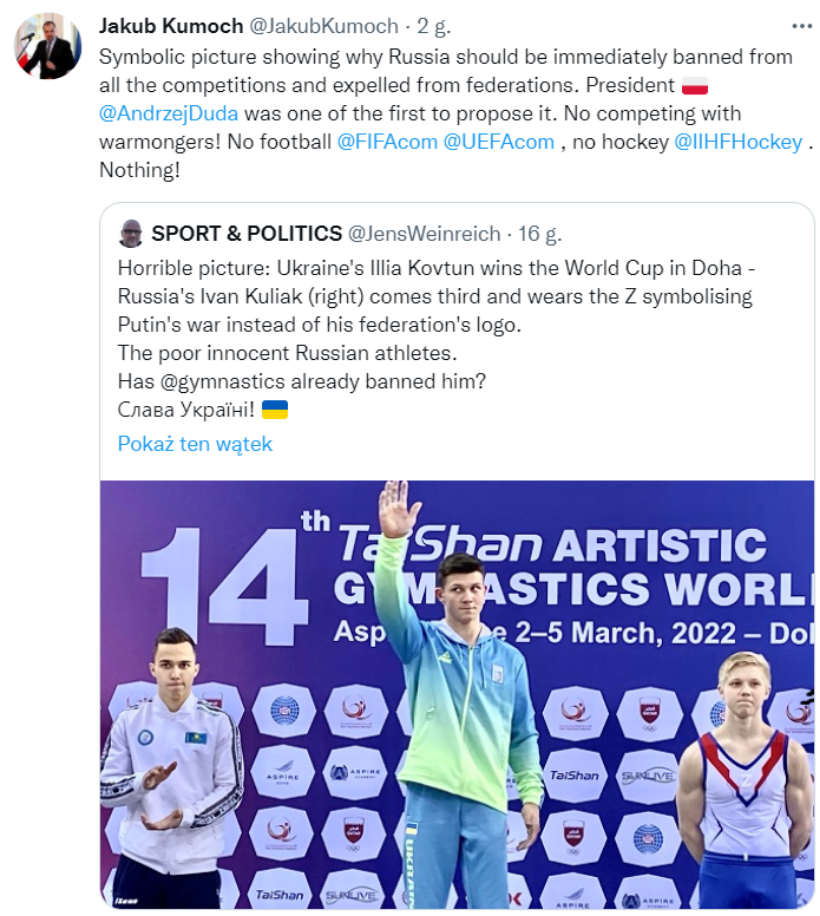 Kumoch's tweet has been accompanied by a photo of Kuliak wearing a 'Z' on his chest, which symbolically represents 'victory' in Russian, and is daubed on the bodywork of Russian tanks and other military vehicles.

"No rivalry with warmongers! No FIFA and UEFA soccer matches, no IIHF Hockey! Nothing!," Kumoch wrote.

Kuliak, who was sharing the podium with the event winner - Ukrainian star Illia Kovtun at a World Cup event in Doha, taped up the flag of the Russian Federation, which had been banned by the International Gymnastics Federation (FIG), and replaced it with the "Z" symbol on his shirt. FIG has also cancelled all events in Russia and Belarus.

The International Olympic Committee has recently recommended that athletes and officials representing Belarus and Russia be barred from participating in upcoming sporting events, following Moscow's recent invasion of Ukraine.

Poland accepts over 5.44 mln refugees since war in Ukraine started