Deep below ground level in Warsaw’s Royal Castle lurks one of Poland’s greatest hidden treasures. This picture within a picture, a portrait but not a portrait whose subject appears to move while remaining still is largely unknown by the public and even many of the art cognoscenti.

Yet, Rembrandt’s oil painting ‘The Girl in the Picture Frame’ is a masterpiece of 17th-century illusion when the genius Dutch painter was at the peak of his creative power. Its beguiling movement, sublime use of light and meditative allure would make the piece a hit in any collection. 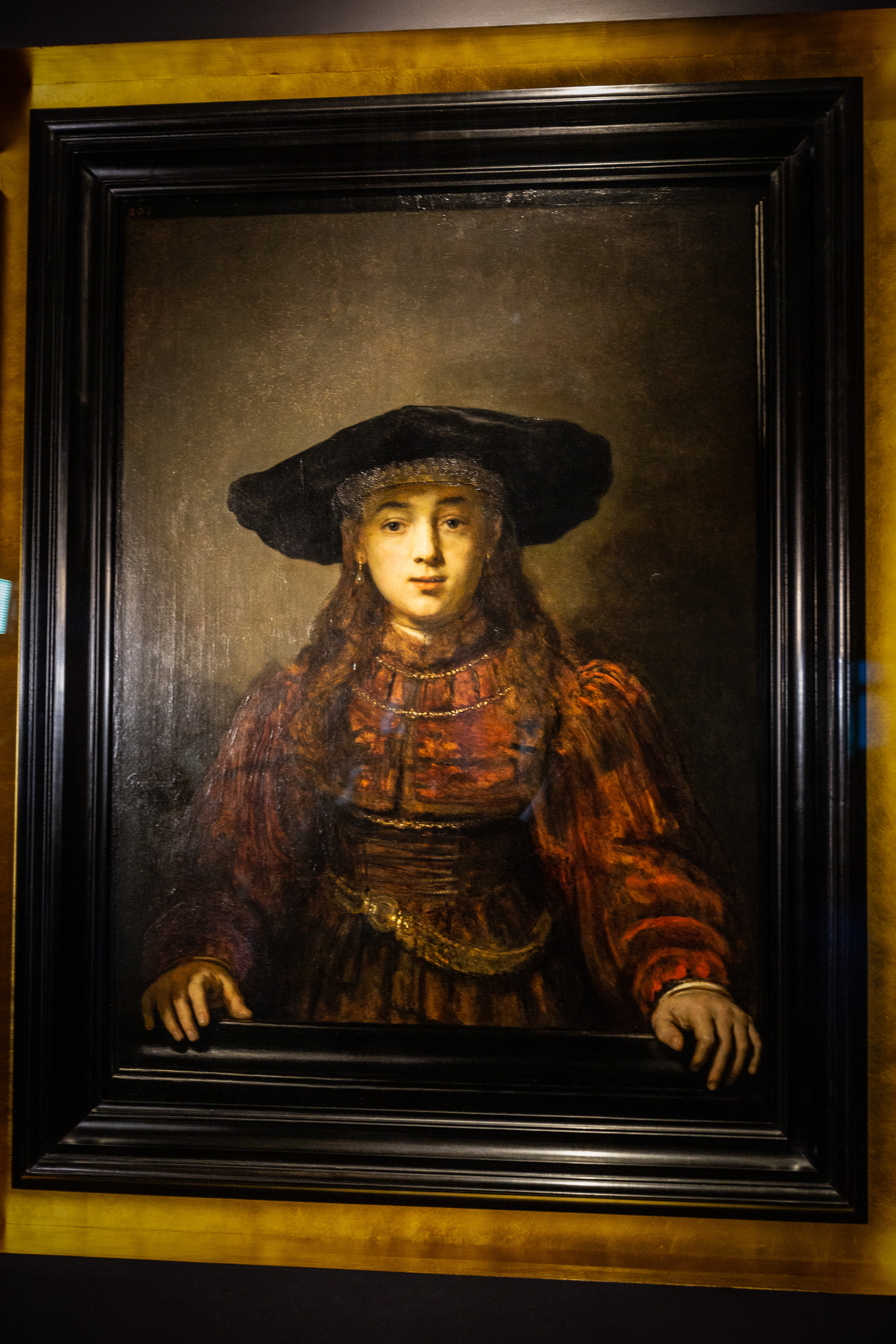 Originally painted in 1641, it came to Poland in 1771 when King Stanisław August Poniatowski bought it as a pair with ‘The Scholar at the Lectern’.Kalbar/TFN

Why it remains overlooked is a mystery. Gifted to the castle by the late Countess Karolina Lanckorońska, it had previously been looted by the Germans and given up as lost.

After suffering the hell of Ravensbrück, the countess regained the painting after the war and finally donated it to the castle as a gift to the Polish nation in 1994, and has been there ever since. 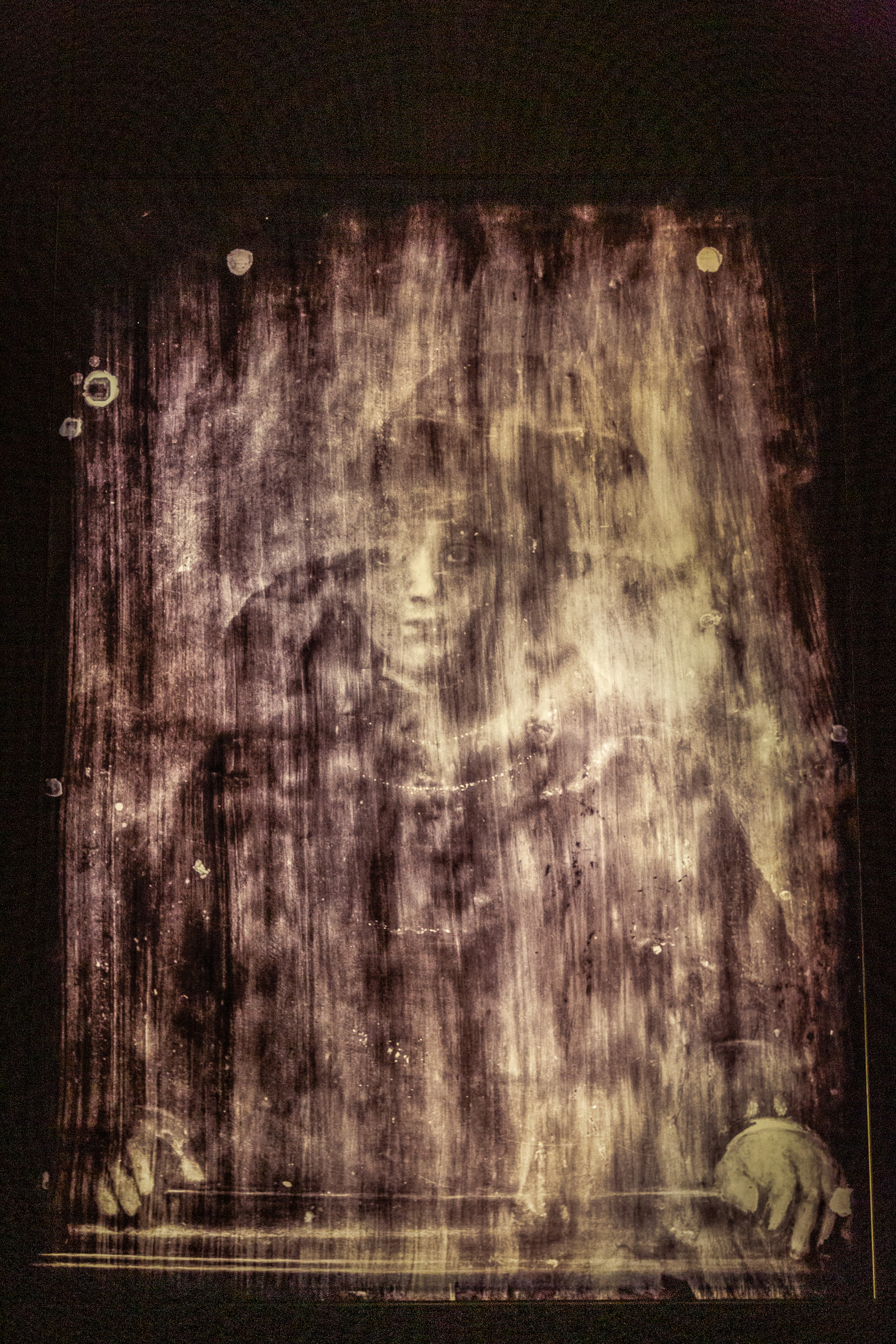 An x-ray taken before restoration work in 2005 revealed that the wooden panel has another image underneath, this time of an older woman.Kalbar/TFN

Now, in an attempt to give the painting its proper rank, it is the centrepiece of the castle’s latest exhibition, which, along with its partner painting, ‘The Scholar at the Lectern’, and 34 works by the artist on paper, commemorates the 350th anniversary of Rembrandt’s death. 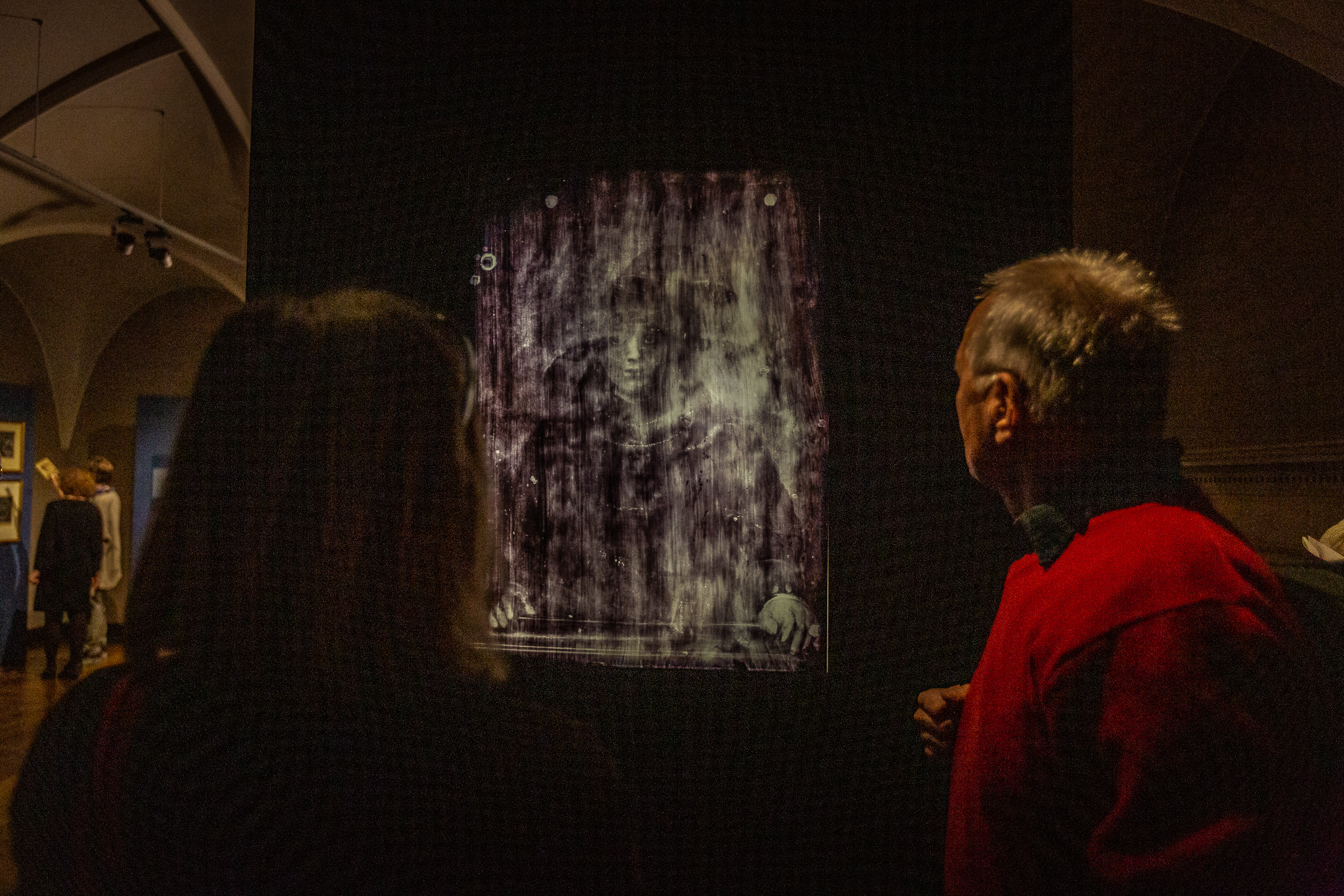 The portrait of the woman in a bonnet was never completed and the panel was reused.Kalbar/TFN

Though there is much to enjoy at the exhibition, the ‘Girl’ is the undeniable star. Adorned in an almost comically large floppy hat, the sense of movement is uncanny. Rembrandt achieved this by painting the lower part of the frame in grand-piano black and placing the girl’s delicate fingers and palms on it as if supporting herself.

Standing in front of the poplar panel 400 years after it was daubed with oils, you feel as though the girl has just walked up to a window and is gently leaning out, looking at her surroundings with a disinterested even bored countenance. Yet, a raised left eyebrow suggests a hint of surprise or perhaps admonishment. 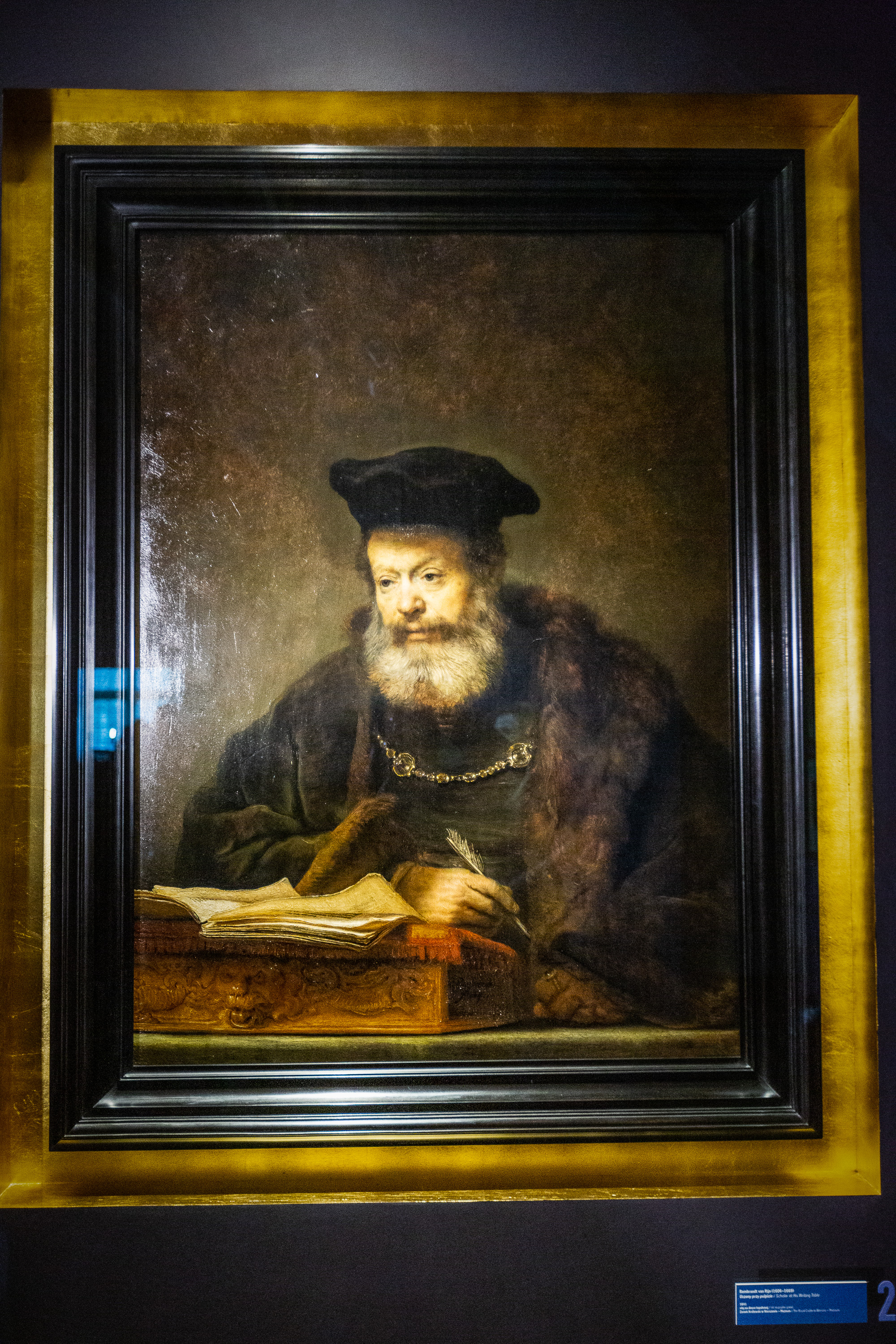 The painting came to Poland in 1771 when King Stanisław August Poniatowski bought it as a pair with ‘The Scholar at the Lectern’ (pictured above).Kalbar/TFN

The illusion of movement is strengthened almost imperceptibly by the way her right earring hangs away from her head glinting in the half light, as though she has just swung into position to fix her contemplative gaze on the viewer.

The effect is beguiling and its absence in the copies of the work that surround it in the exhibition proves how far ahead of the game Rembrandt was in the middle 1600s. 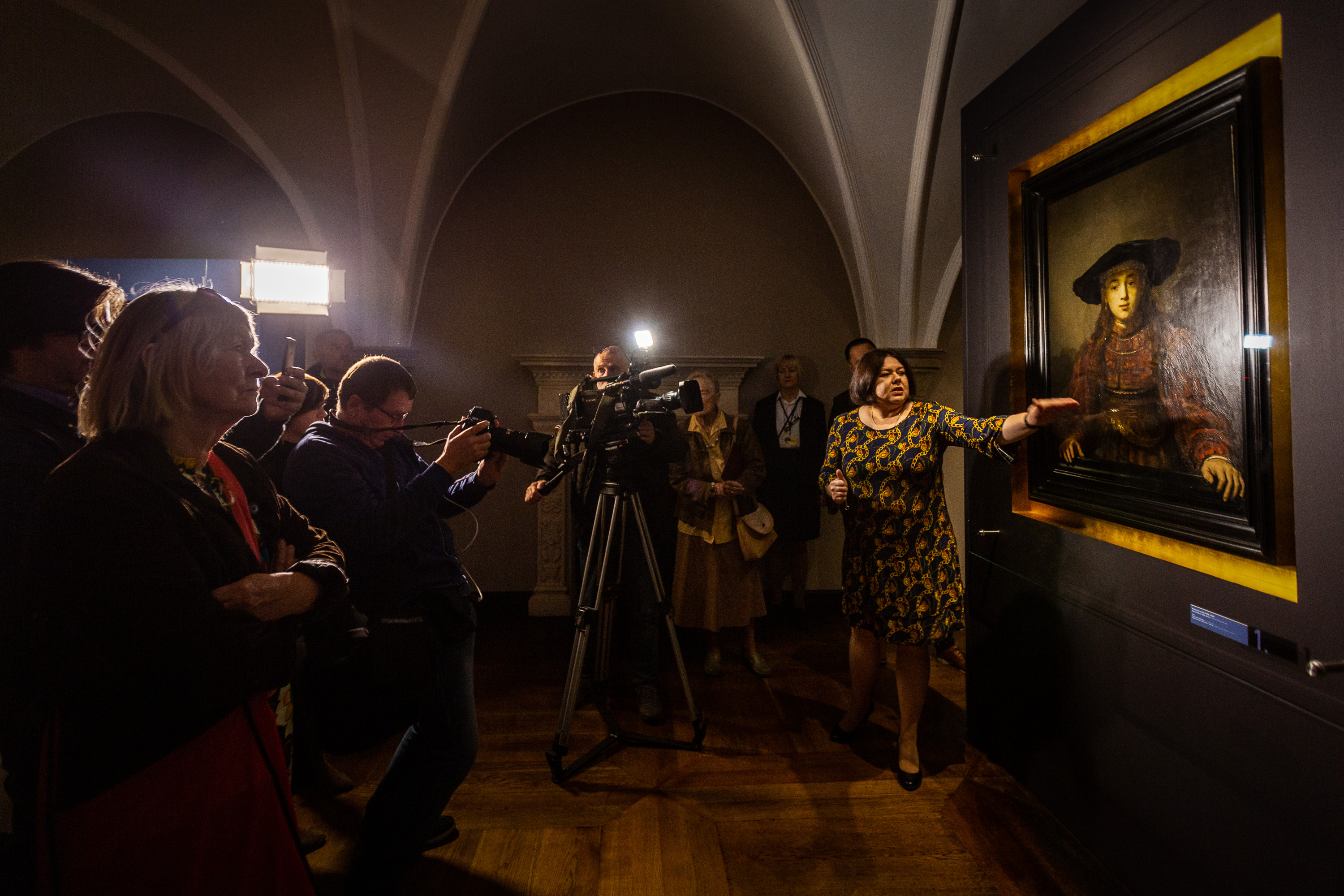 When it comes to its place in the pecking order, castle curator of paintings Alicja Jakubowska is quite clear. “There is no doubt that together with the ‘Scholar’ they are the most important paintings in the castle’s collection,” she says.

“Rembrandt used light and shade wonderfully in the painting,” she continues. “As well as illusion. He showed a living person in motion, as well as their emotions and feelings.

“The overall effect is truly stunning, as we feel that she is entering our space. When we look at the oeuvre, this is an exceptional painting.” 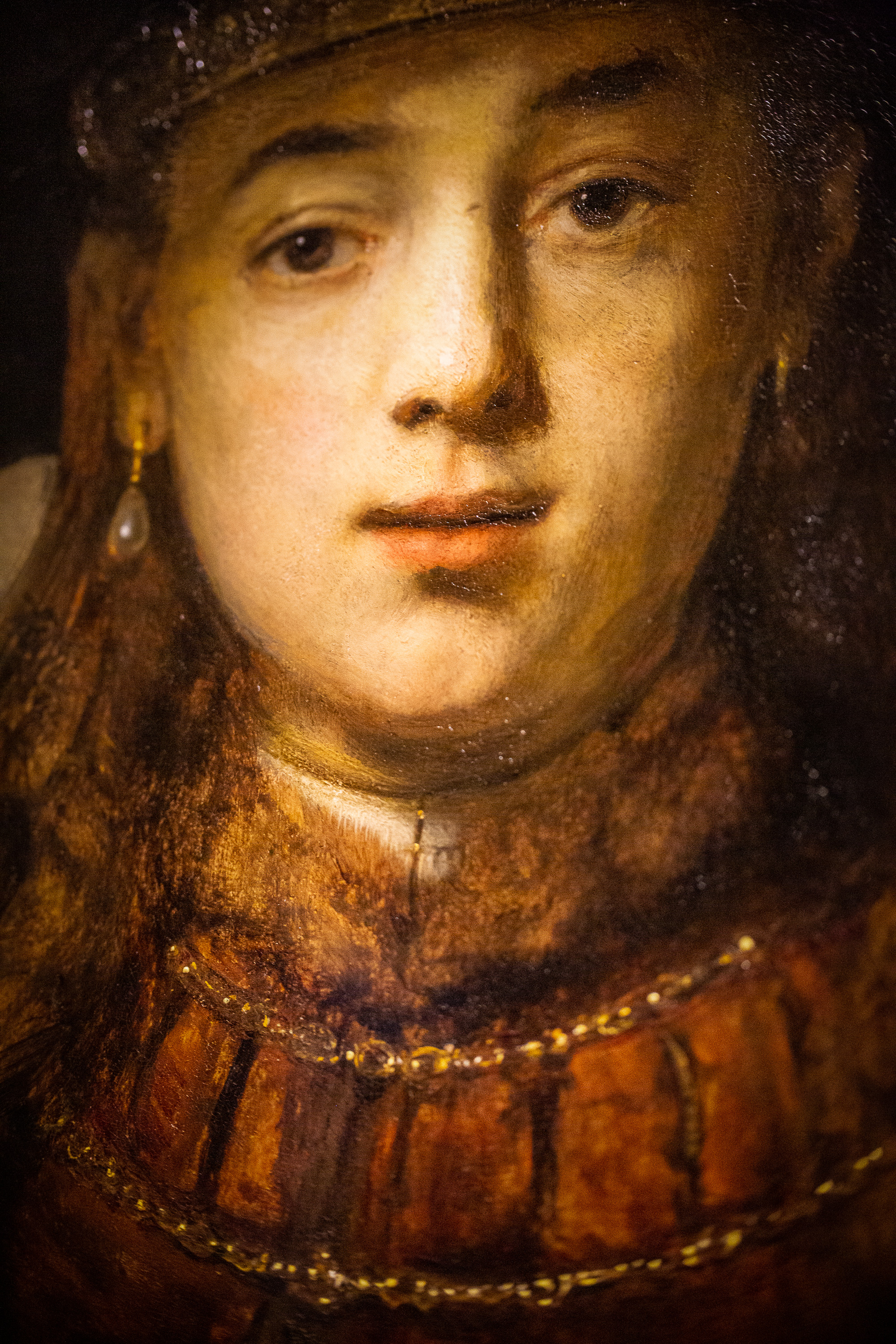 The painting it is what art buffs call a tronie, or a study of a head or half-figure.Kalbar/TFN

Adding to the overall sense of mystery surrounding the painting is the fact that we don’t know who the girl is. In the past, the painting was called ‘The Jewish Bride’ – at the time a Jewish bride on her wedding day would let her hair down, as depicted in the painting, and several works that Rembrandt painted in this style were given the same name.

However, the work is not a portrait. Rather it is what art buffs call a tronie, or a study of a head or half-figure. This was a style that fascinated Rembrandt as he tried to capture moods and facial expressions using models for subjects. 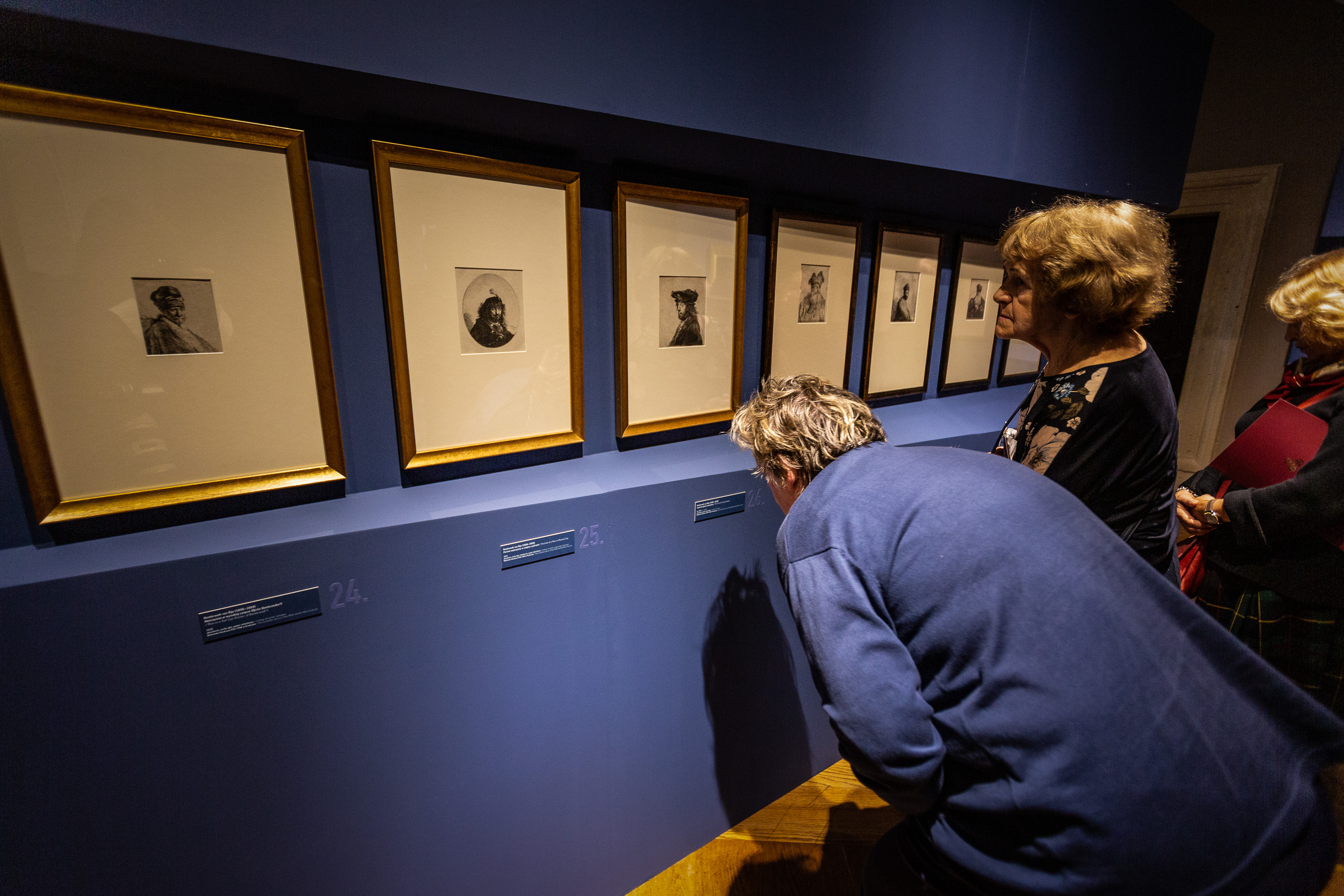 The exhibition also includes a number of sketches by Rembrandt.Kalbar/TFN

The painting does not hang on a wall, but sits on a column behind protective plastic in the middle of the room. Walk to the back of the column and the reason becomes clear. An x-ray taken before restoration work started on the painting in 2005 revealed that the wooden panel has another image underneath, this time of an older woman.

Rembrandt had originally begun to paint a different picture of a woman seated, turned slightly to the left, wearing a dress with a millstone ruff, and wearing a small bonnet.

The portrait of the woman in a bonnet was never completed and the panel was reused. Rembrandt was never known to have reused a panel on which he had started another painting for a portrait commissioned by a client. 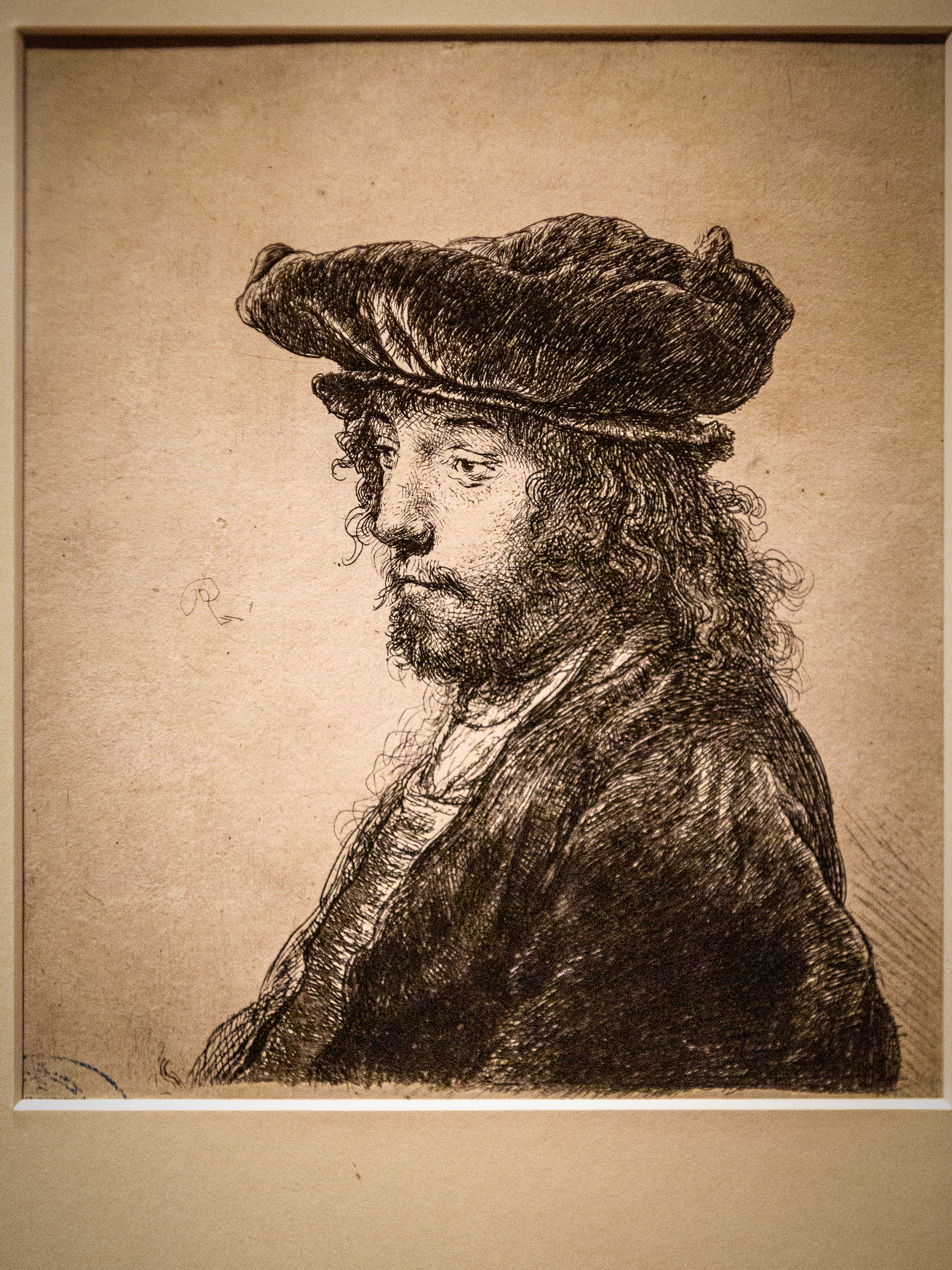 One of the 34 pictures on paper drawn by the master.Kalbar/TFN

Originally painted in 1641, it came to Poland in 1771 when King Stanisław August Poniatowski bought it as a pair with ‘The Scholar at the Lectern’. However, the paintings were not created as a pair and ‘The Scholar’ was trimmed at some time in the past to make it the same size as ‘The Girl’.

Stanisław August initially displayed them at the Palace on the Isle in Łazienki Park in Warsaw and after his death they both passed to his nephew Józef Poniatowski who in 1813 left them to his sister Maria Teresa Poniatowska. 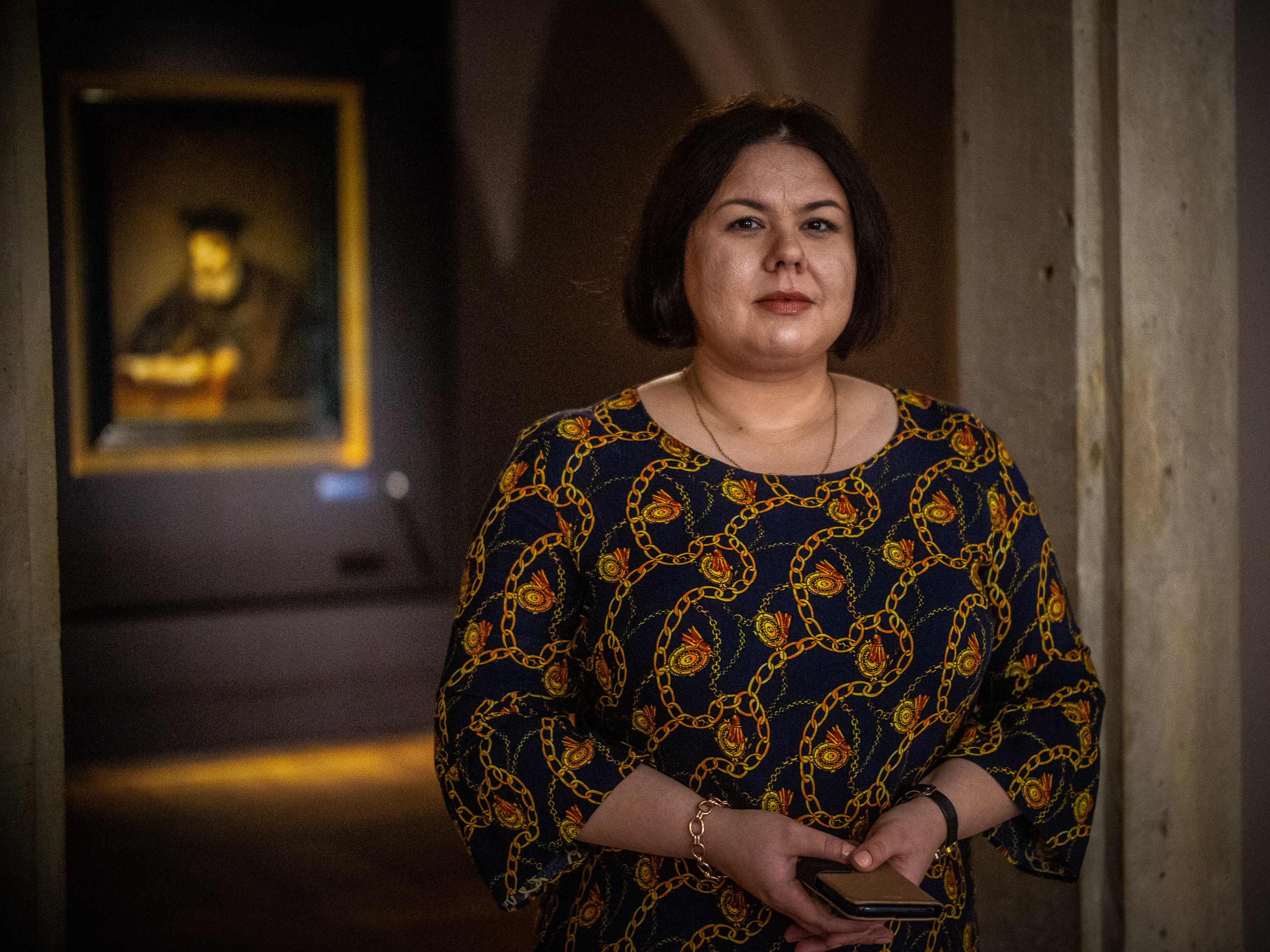 “The overall effect is truly stunning, as we feel that she is entering our space,” says Jakubowska.Kalbar/TFN

In 1815, they were bought by Kazimierz Rzewuski, who gave them to his daughter Ludwika, wife of Antoni Lanckoroński. ‘The Girl’ remained in the Lanckoroński family until the Gestapo seized it during World War Two. However, in 1947 it was returned to its rightful owners and placed in a Swiss bank vault.

It was next exhibited in 1994 in an exhibition of the family's artworks at the Royal Castle, Warsaw, after which Karolina Lanckorońska donated the painting to the Royal Castle.

Though, seeming to have found a place of safety in the basement of the Royal Castle, ‘The Girl’s’ provenance was put on trial when it was claimed that she may not be an original Rembrandt. 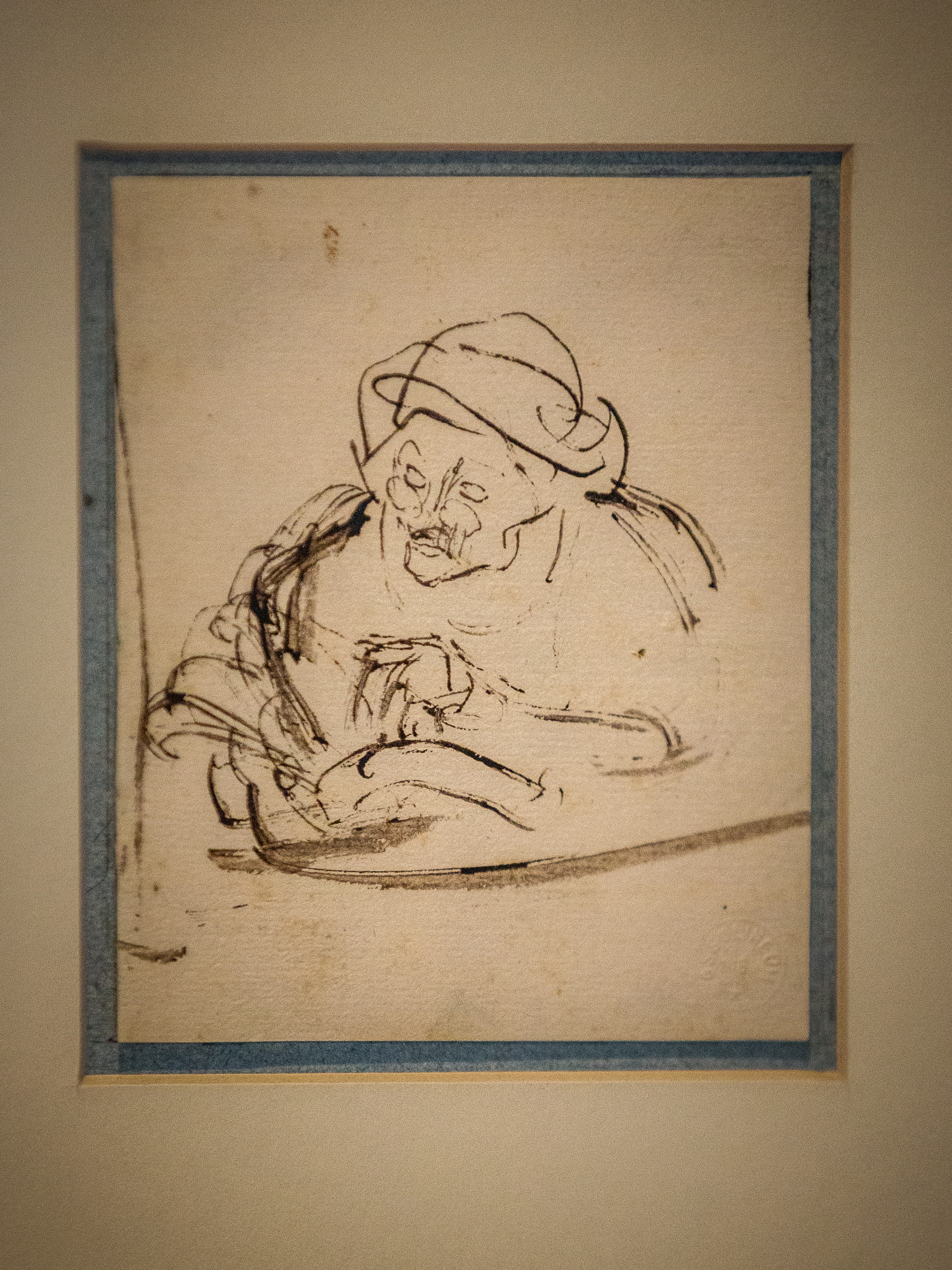 The exhibition commemorates the 350th anniversary of Rembrandt’s death.Kalbar/TFN

It was studied by the Rembrandt Research Project, which analysed ‘The Girl’ and ‘The Scholar’ three times and in February 2006 confirmed they were painted by Rembrandt.

With her dignity now restored, she sits quietly waiting for visitors to charm with her enigmatic gaze.