Remembering the 16: the Soviet betrayal and arrest of 16 Poles of the underground state

On March 27-28, 1945, in a villa in Pruszków, the NKVD arrested sixteen leaders of the Polish underground in what has been described as one of the greatest tragedies to befall the Polish state.

Invited for talks by the Soviets, they became the victims of a cruel deceit when they were arrested after having been given assurances of their safety.

They were then transported to by special plane to Moscow and imprisoned in the Lubyanka. The Polish underground leaders were charged with aiding the Germans and later handed down sentences in a show trial. 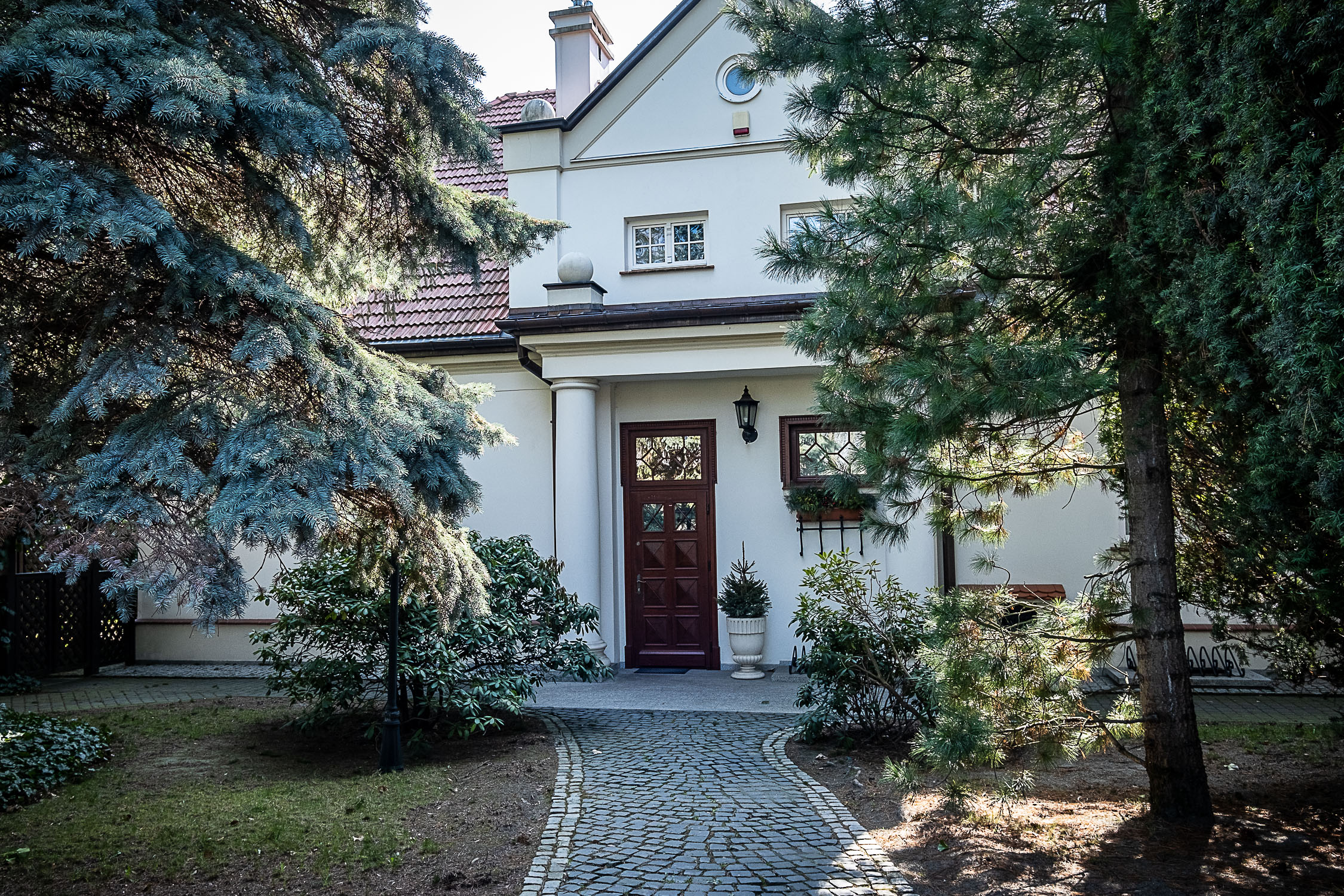 The house in Pruszków where 15 of the 16 were arrested.Kalbar/TFN

The trial of the underground leaders spelled the end of hopes electing an independent government in post-war Poland.

To modern observers it may seem foolhardy for Poland’s underground leaders to walk into what with hindsight was obviously a Soviet trap.

However, they believed there was at least a chance that the Soviet Union wished to implement what it had agreed with the Churchill and Roosevelt at Yalta.

They believed that there would be democratic elections that would elect a government of “national”, independent of Soviet power, as Roosevelt, Churchill and Stalin had agreed at Yalta. 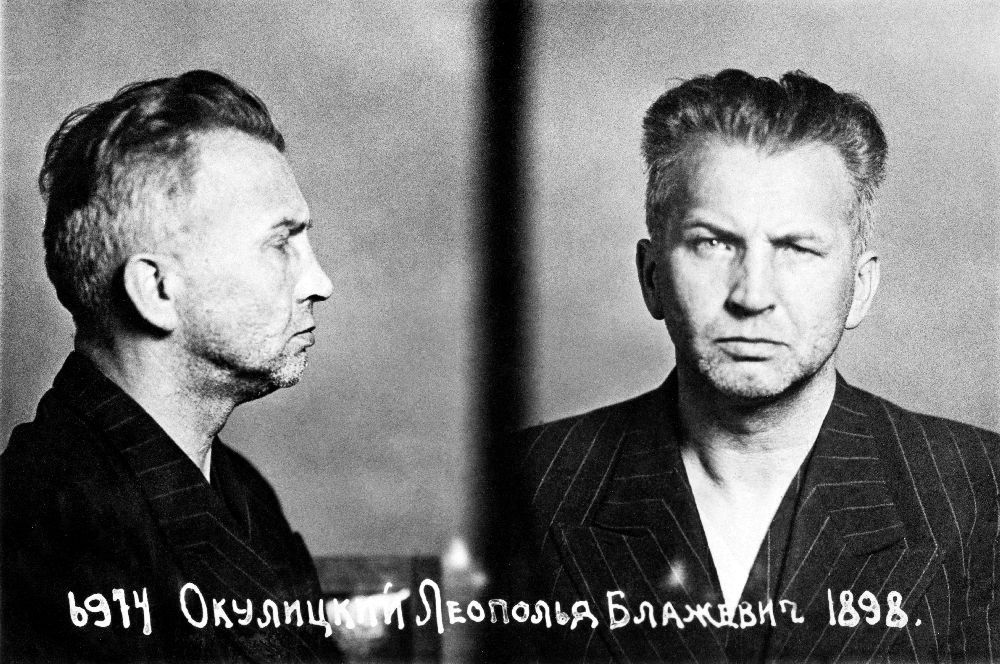 An NKVD picture of Okulicki taken in 1945.Public domain

The leaders of the Polish Underground State thought that the talks in Pruszków were to determine the composition of the new government.

Before the kidnappings took place, a preliminary meeting took place on March 4, 1945 in Pruszków between a Home Army delegation and Colonel Pimenov, a representative of General Ivan Serov, an NKVD commander who was responsible for the murder of Polish officers in Katyn.

Pimenov had invited General Leopold Okulicki, the last commander of the Home Army, and Deputy Prime Minister Jan Stanisław Jankowski to a meeting with the staff of Marshal Zhukov. 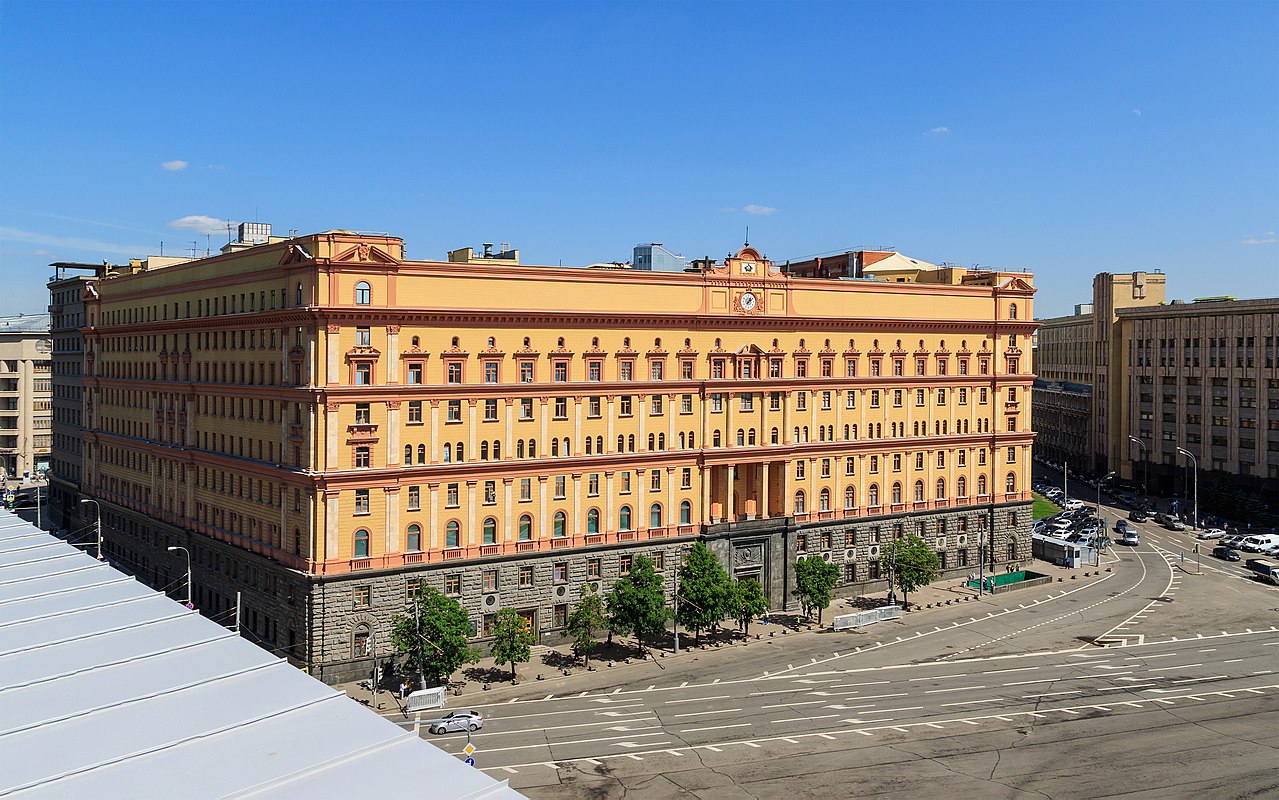 The infamous Lubyanka prison on the heart of Moscow.Creative Commons license

In a letter sent to Okulicki on March 6, he vouched: “I, as an officer of the Red Army, to whom such an important mission has been bestowed, give you a full guarantee that from the day when your fate will depend on me, that means when you come to us, you will be completely safe.”

Okulicki, who had already seen the inside of the Lubyanka, was dubious of the NKVD colonel’s assurances. “I don't want to go there because I've already been there and they won't let me go a second time,” he is reported to have said.

The first to go to the villa in Pruszków on March 27 were Jankowski, Okulicki and Kazimierz Pużak.

They had lunch at the villa and were then taken to Praga, where they were to meet General Serov. However, the meeting did not take place. 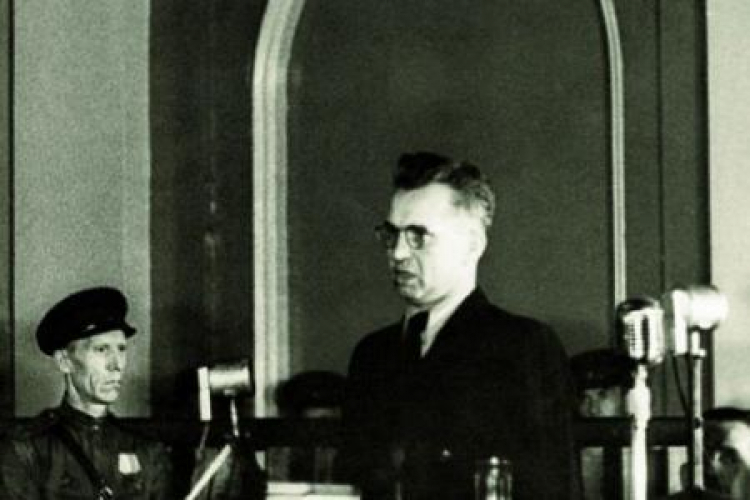 Okulicki during his show trial. He would never see Poland again.IPN

The Poles were told that the meeting was postponed until the next day. In the morning they heard that the talks had been moved to Moscow. They were taken there by plane and then imprisoned in the Lubyanka.

One of the other kidnap victims later recalled: “They did not come back that day. We waited for them all day in a safe house on Hoża Street and even though we received an anonymous letter on March 27 not to go, that they would lock us all up.

Despite this, believing in the strength of the Yalta agreements, on the next day the remaining members of the group made their way to the meeting, although they fully aware of the risk they too would be arrested. 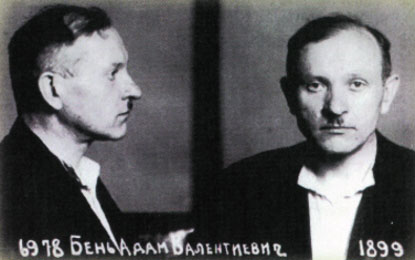 Adam Bień, one of the 16.Public domain

“If we hadn't agreed, if we hadn't gone, Russia would have treated this as an unwillingness to negotiate," said Adam Bień, one of the sixteen and a member if the underground cabinet.

Bień recounted what happened next. “From Pruszków we were taken to Włochy. An NKVD major was sitting by the phone, at that moment when we entered he finished the conversation and said: ‘Gentlemen, I was just talking to Moscow. Your colleagues who came to us yesterday landed at the airport in Moscow.’

“We took it as good news, but the evening came, we waited, nothing happened, and only the next morning some general appeared and said that we were going to the airport. 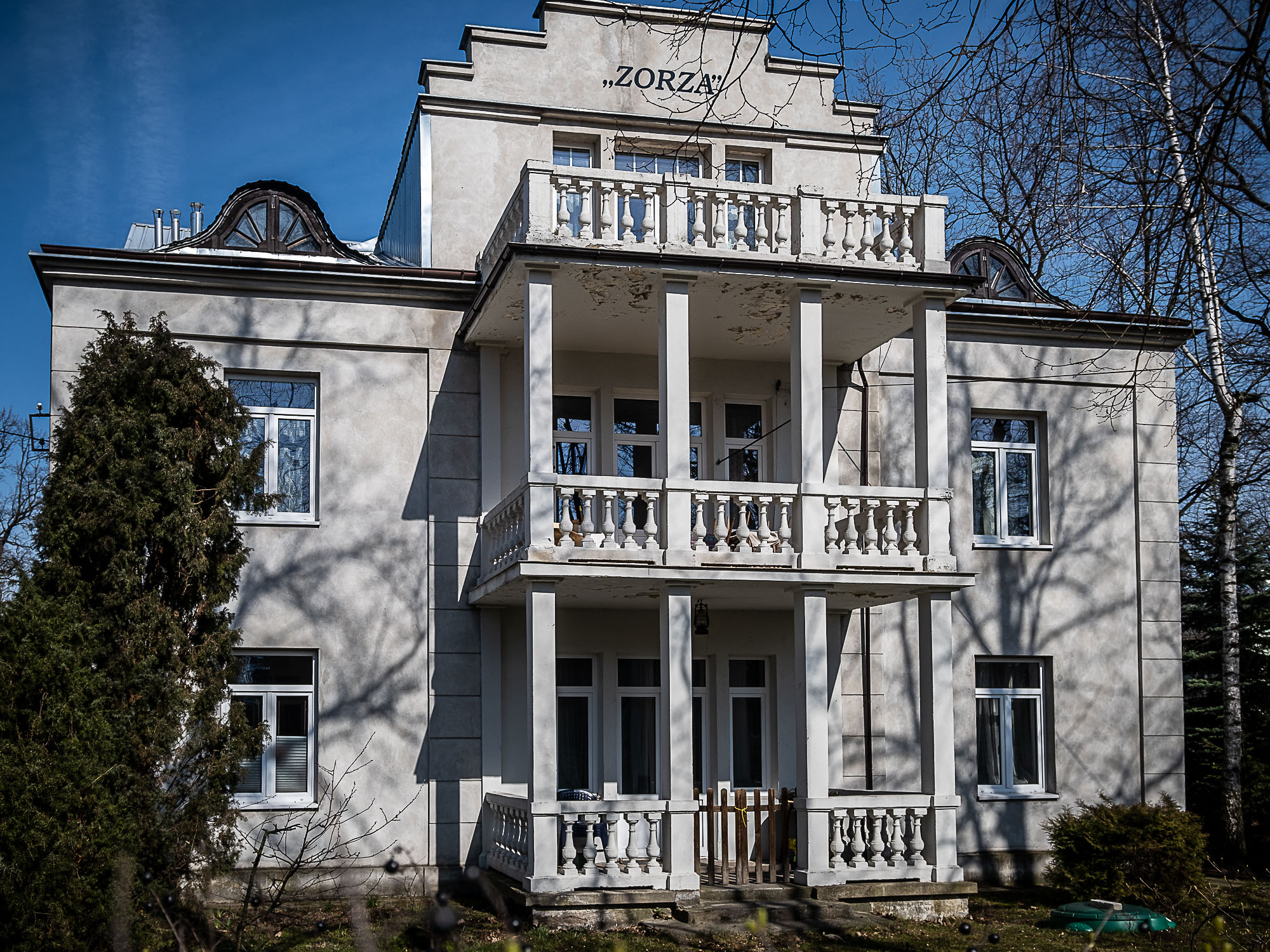 The villa in Milanówek which served as the headquarters of the Home Army after the Warsaw Uprising.Kalbar/TFN

“The courtyard was surrounded by soldiers with guns, black limousines were waiting, we got in and went to Okęcie. I remember when one of the Soviet officers asked us: ‘Have you taken a handful of your native land?’”

Before the trial, the Poles were interrogated for almost three months and evidence was prepared against them.

They were accused of preparing an attack on the Soviet Union together with the Germans. They were also accused of creating combat units and terrorist groups, which were supposed to have murdered Soviet soldiers.

The four-day trial in Moscow was a clear violation of international agreements, as there was no legal basis to put citizens of one state on trial in another. 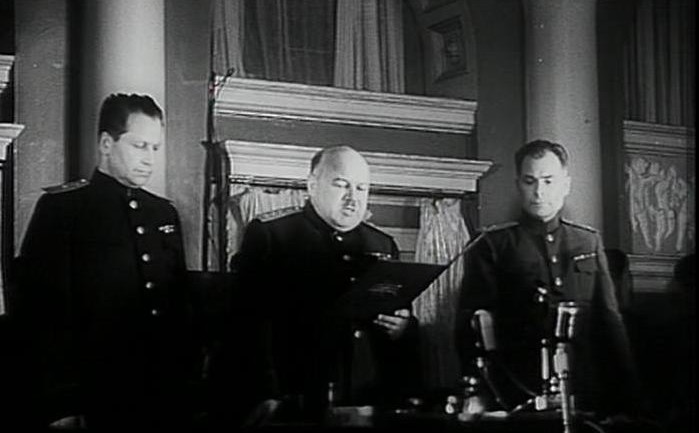 Thirteen of the defendants were sentenced to prison terms, from four months to 10 years. The charges against the four others were dropped.

Three of them never returned to Poland. In 1955, the Soviets declared that Leopold Okulicki had died of a heart attack on December 24, 1946. They said he died in a prison hospital in Moscow and that his body had been burned.

However, others say that General Okulicki was murdered in the Lubyanka. Antoni Pajdak, one of the sixteen, and Adam Bień heard Okulicki being led out of his cell, to which he never returned.

Two others who were sentenced, Jan Stanisław Jankowski and Stanisław Jasiukowicz, also died in prison. 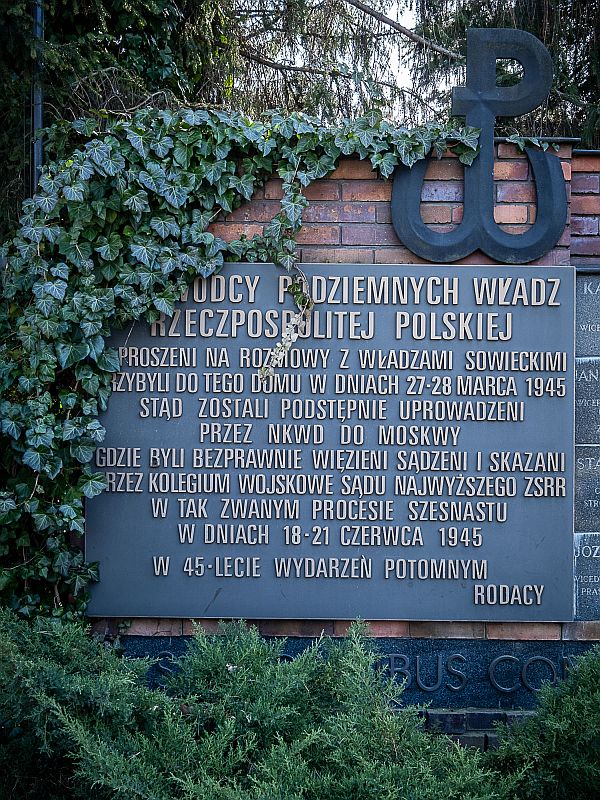 A plaque outside the villa in Pruszków commemorating the arrests.Kalbar/PAP

The others returned to Poland in 1945, apart from Bień who returned in 1949. Some were put on trial again in Poland. Some emigrated, while others remained in Poland.

As a result of the trial, the Polish underground lost most of its leaders, a blow from which it never fully recovered.

The response of Poland’s wartime allies, the United Kingdom and the USA, was muted, and in July 1945 they withdrew support for the Polish government in exile, thereby rubberstamping Stalin’s control of Poland.