Over 200 years after it left the King of Poland’s royal residence, an epic painting by Rembrandt has returned to its prior perch to go on temporary display inside Warsaw’s Łazienki Museum.

On public view until the beginning of August, The Polish Rider is one of only two equestrian portraits to have been painted by the Dutch master and its fleeting return has been seen as a major coup by art fans in Poland.

Speaking to TFN, co-curator of the exhibition, Izabela Zychowicz, said: “The last time the painting was hung in Łazienki was 200-years back, and the last time it was in Poland was around a century back, so this represents a huge moment for us.”

Believed to have been painted circa 1655, in 1791 it was offered to Poland’s last king, Stanisław August Poniatowski, by Michał Kazimierz Ogiński, the Grand Hetman of Lithuania. 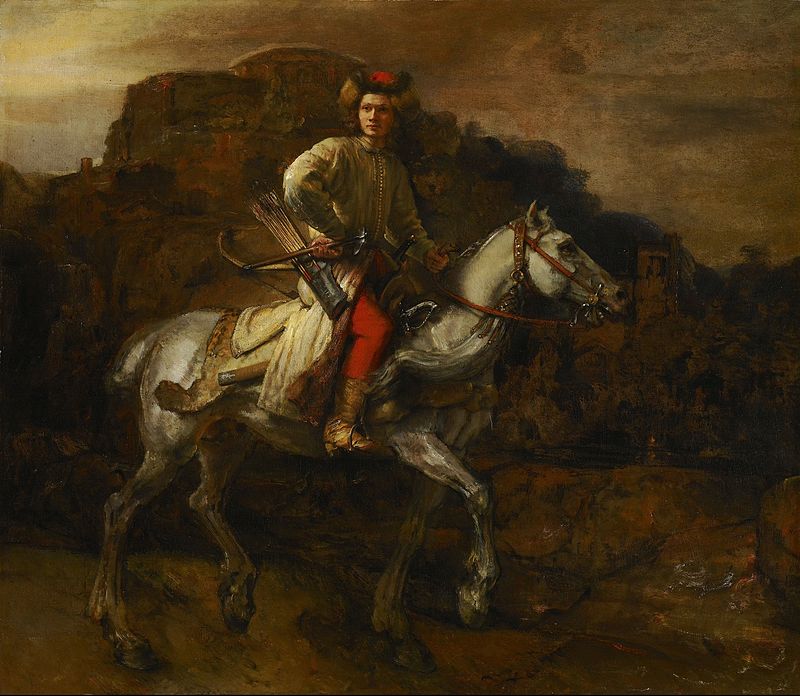 Believed to have been painted circa 1655, in 1791 it was offered to Poland’s last king, Stanisław August Poniatowski, by Michał Kazimierz Ogiński, the Grand Hetman of Lithuania.Public domain

“He knew the monarch appreciated both equestrian artworks and the paintings of Rembrandt, so he wrote a charming letter to the King asking if he would like the painting in exchange for some orange trees from his gardens,” says Zychowicz. “It’s amusing to look back now and think Ogiński valued this priceless painting in terms of oranges.”

At the time, the King had eleven paintings that were considered to have been painted by Rembrandt (since then, it’s been proven that only three were originals), and The Polish Rider was hung in the hall found on the first floor of Łazienki’s Palace on the Isle – the king’s beloved summer retreat.

Immediately, the painting became one of the stars in the King's private collection of around 2,500 works of art.

On the King’s abdication in 1795, the painting subsequently remained in Łazienki and was moved to a ground floor picture gallery later that decade – it is here where the work has been once again presented.

“The public reaction since the exhibition was inaugurated late last week has been overwhelming, we’ve had people queuing outside,” says Zychowicz. 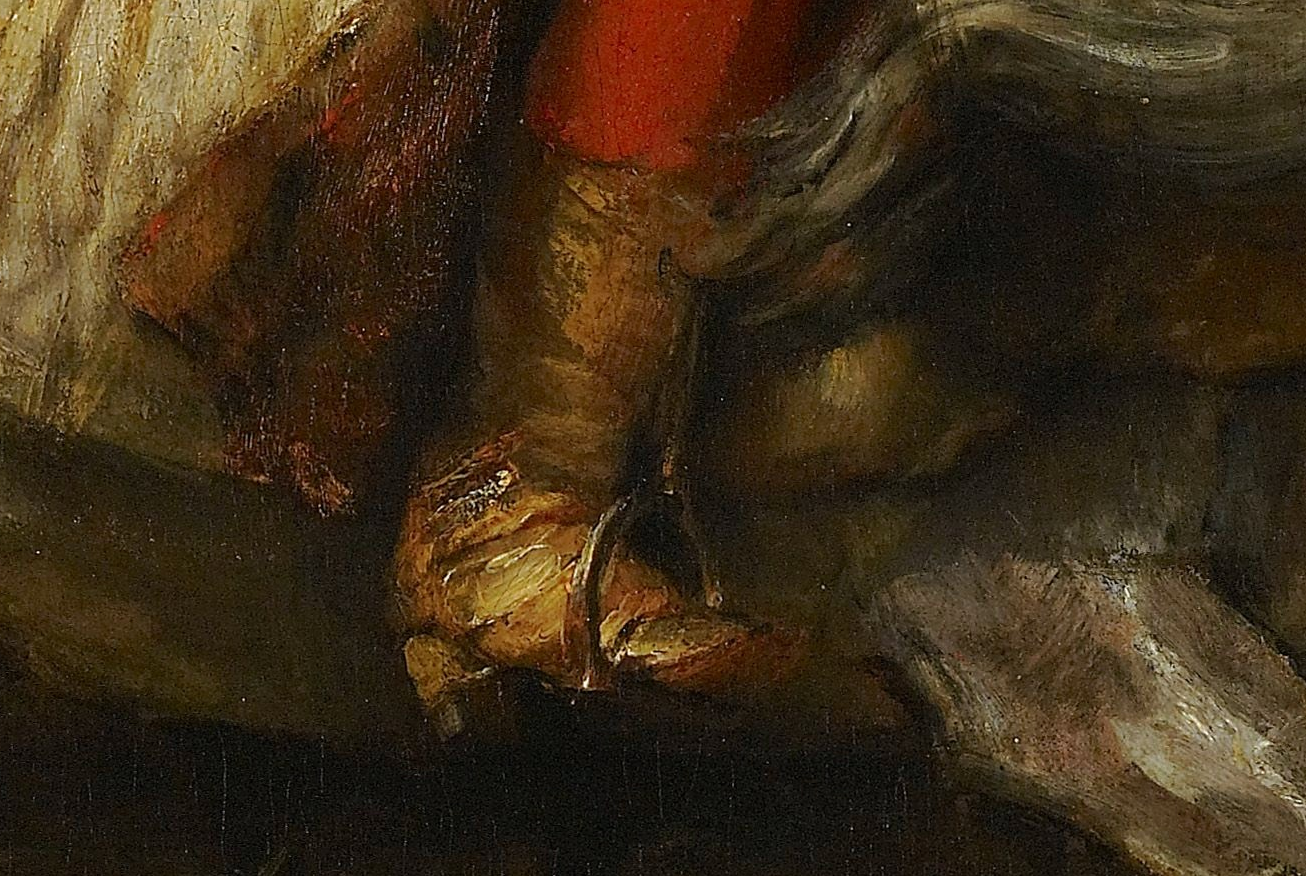 For years doubts existed as to whether the painting had actually been correctly attributed to the right author, with some critics saying small details such as in the rider’s foot may have been painted by someone else.Public domain/PAP

For years doubts existed as to whether the painting had actually been correctly attributed to the right author. In fact, by the mid-1980s, some researchers had openly started questioning the painting’s authenticity and discussing Willem Drost, a student of Rembrandt, as its possible creator.

“Yes, there were doubts in the past, but these have now been categorically disproved,” says Zychowicz. “It is possible that some small parts were painted by others – for instance, the foot of the rider – but art historians no longer have any hesitation when stating that this painting was the work of Rembrandt.”

Though much appreciated by the King, his treasured artworks were sold off piece-by-piece following his death in 1798. In 1814 The Polish Rider was sold and thereafter changed hands numerous times until 1910 when its owner at the time, Zdzisław Tarnowski, sold it to the American industrialist and financier Henry Frick.

When he died, his family home was converted into a museum and the so-called Frick Collection quickly assumed a reputation as one of the most important cultural institutions in New York. 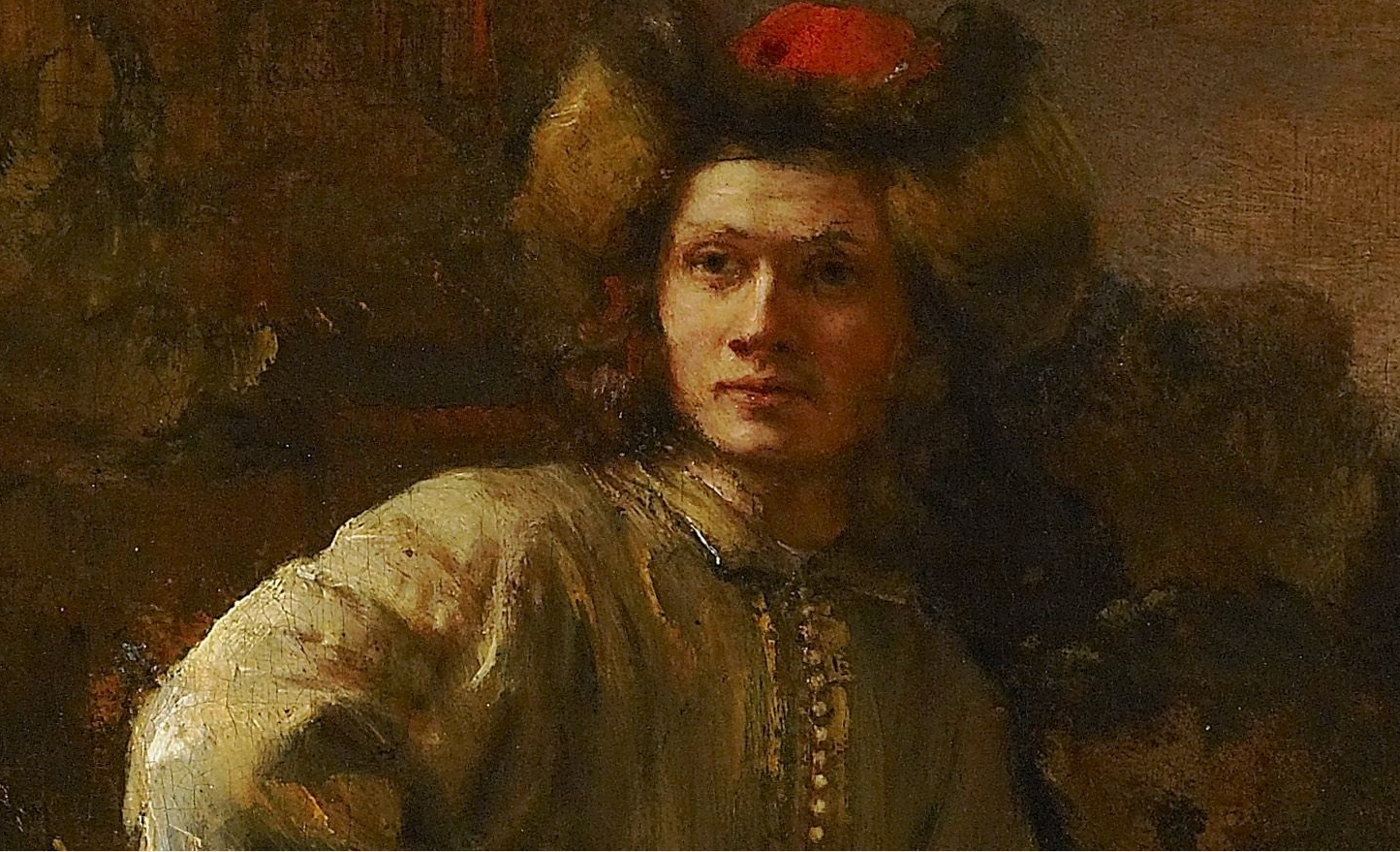 Although the identity of the horseman remains a figure of mystery and speculation. some have claimed he to have been modelled on Rembrandt’s own son.Public domain 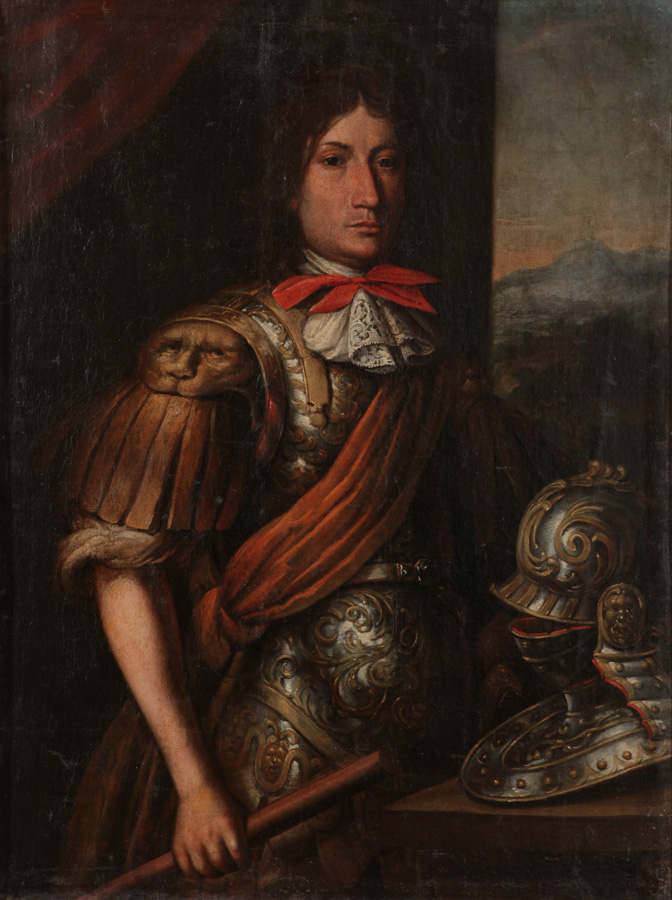 Others suggest that the character depicted could have been Marcjan Aleksander Ogiński, a Lithuanian nobleman.Public domain

Inspiring generations of visitors, such is the painting’s impact that it even found itself awarded a mention in Frank O’Hara’s 1960 poem ‘Having A Coke With You’.

However, no longer must people travel to the United States to view it, and for that credit must go to the relationship established between the Frick and Łazienki.

“In 2018 we started cooperating with Dr Xavier Salomon, the chief curator of the Frick Collection,” says Zychowicz. “He came to Poland to research The Polish Rider, and seeing that the painting had once hung in Łazienki it followed logic that he came here.”

Meeting with Zychowicz and Dorota Juszczak, the exhibition’s co-curator, it was then that the trio first discussed the possibility of the painting being shown in Poland, something that became a reality when the Frick Collection’s home was closed for renovation.

Widely recognized as one of the artist’s finest works, Salomon himself once picked out The Polish Rider as one of his favourite paintings in a list of the world’s best Rembrandt’s published by Art News last year. 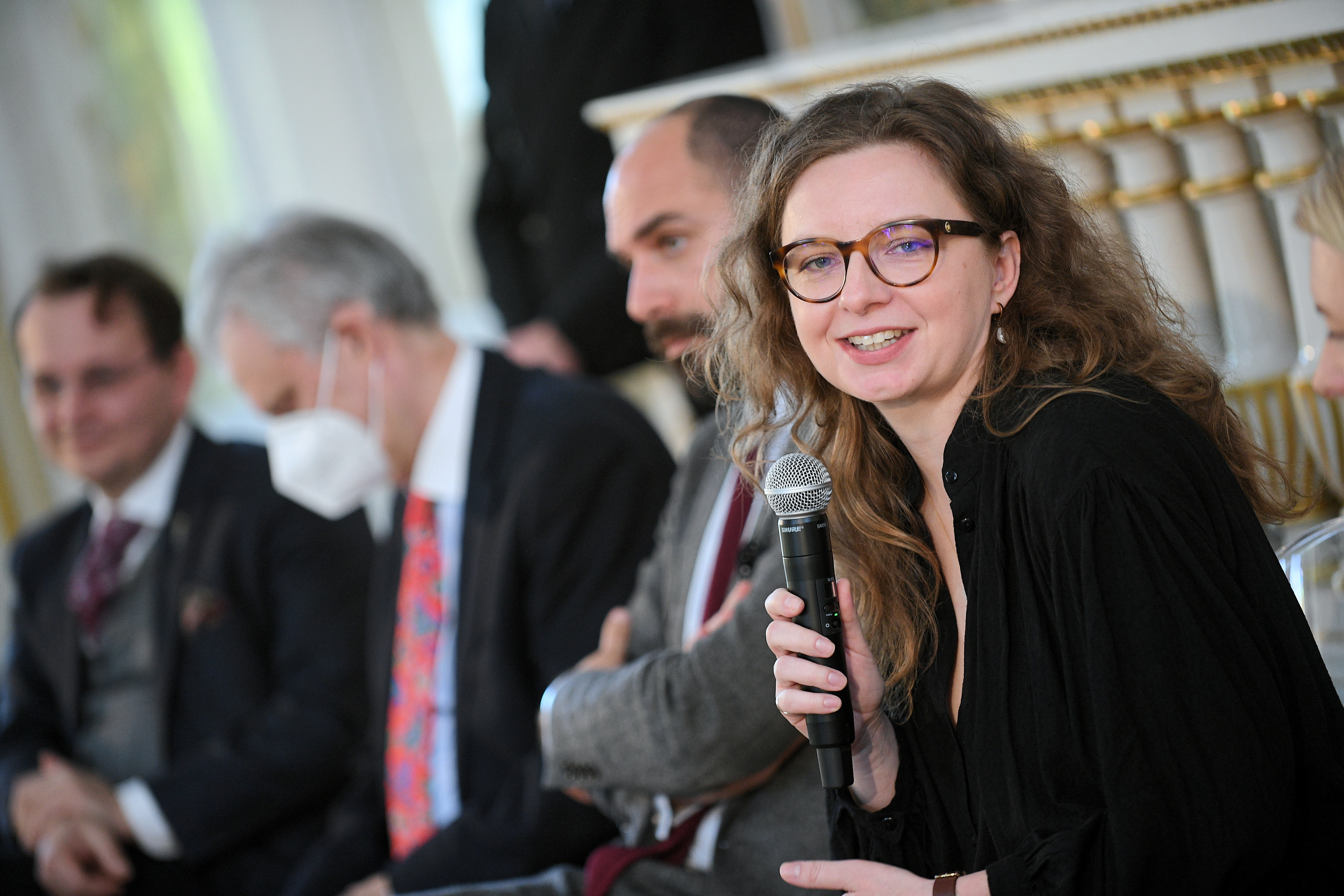 Co-curator of the exhibition, Izabela Zychowicz said: “Many ideas have been floated as to who the horseman is, and I think it’s likely that the King wondered this himself. Personally, I think that Rembrandt intended for this painting to be open to such wide interpretations and I would urge people visiting to draw their own conclusions.”Marcin Obara/PAP

“Rembrandt was fascinated by the ‘other’,” wrote Salomon in his justification. “He collected exotic costumes and shells, weapons and antiquities, and objects from a number of other cultures. He copied Indian Mughal miniatures. He was truly interested in the wide world outside of Amsterdam.

“In this image of a stylish, Polish horseman, he portrays one of the most mysterious and romantic figures of the 17th-century. We do not know who this man is, where he is, where he is coming from, or where he is going.”

Continuing, Salomon concluded: “I often feel that this is one of those paintings that encapsulate the human experience in a single image. I look at this canvas every day and I have grown to love it more and more. The way the figure emerges from the shadow. The way he looks at us.”

Saliently, it is these points raised by Salomon that make The Polish Rider such an engrossing work of art.

With the subject of the painting never formally identified, the horseman has become a figure of mystery and speculation. Of the theories, some have claimed the rider to have been modelled on Rembrandt’s own son, others that the character depicted could have been Marcjan Aleksander Ogiński, a Lithuanian nobleman. 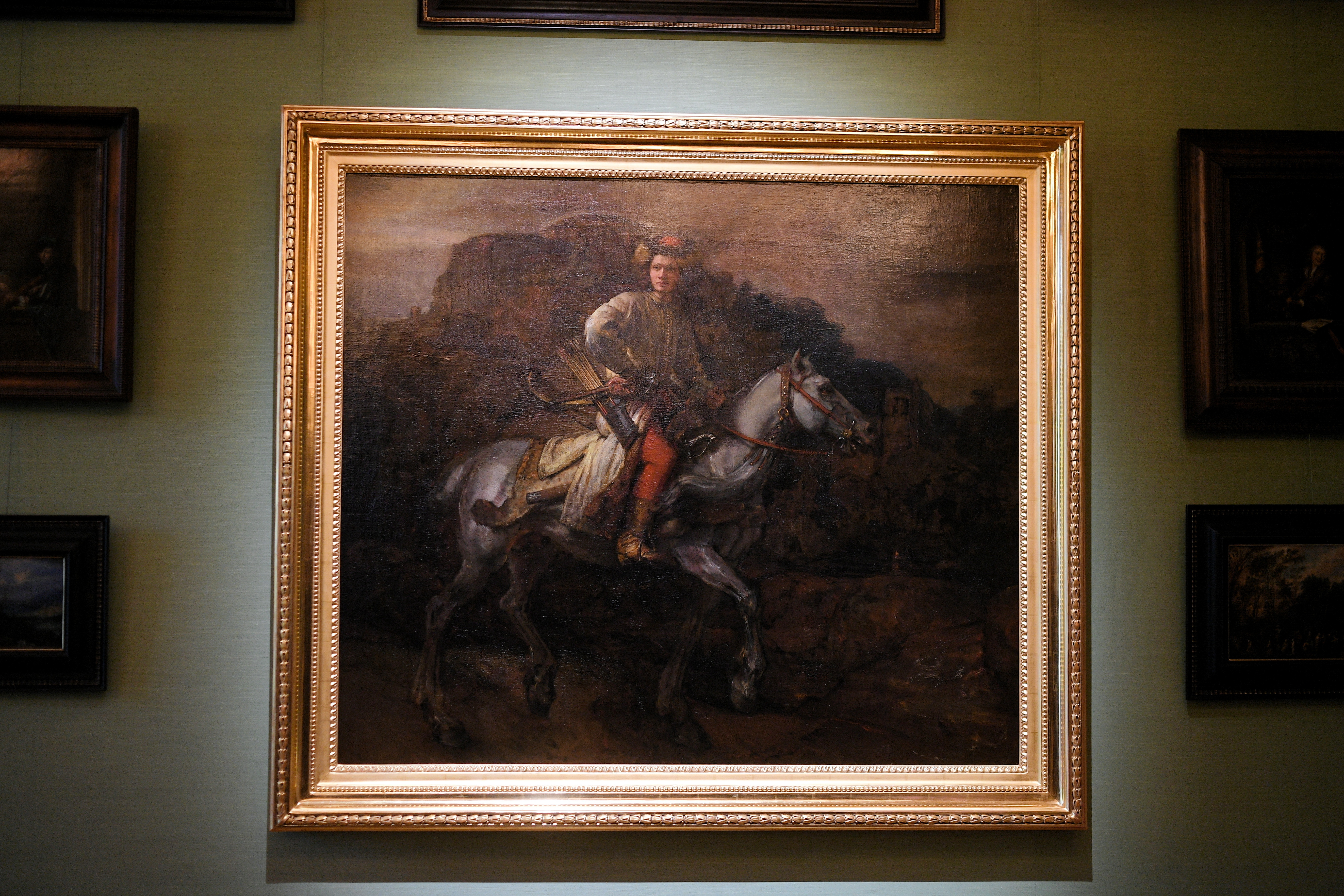 Zychowicz, said: “The last time the painting was hung in Łazienki was 200-years back, and the last time it was in Poland was around a century back, so this represents a huge moment for us.”Marcin Obara/PAP

Yet more have suggested that the figure belonged to the Lisowczyks, a Polish-Lithuanian cavalry unit, whilst other academics have theorized that Rembrandt took inspiration from the Old Testament.

Either way, what is beyond dispute is the striking stoicism that emanates from the rider. As dark clouds loom menacingly in the distance, the horseman seems unphased by the threatening background scene. Instead, he stares in front with a gaze that speaks of defiance, faith and honour. He is indefatigable.

“Many ideas have been floated as to who the horseman is, and I think it’s likely that the King wondered this himself,” says Zychowicz. “Personally, I think that Rembrandt intended for this painting to be open to such wide interpretations and I would urge people visiting to draw their own conclusions.

“Speaking for myself, I see a hope present amid the darkness, and although it is strictly my own interpretation, I view the horseman as a freedom fighter fighting for all of our ideals.

“Given the war in Ukraine, this painting has a present-day relevance and I think that there is ultimately something very uplifting about it.”