The ambitious project to rebuild Saski Palace came a step closer to being realized yesterday after President Andrzej Duda presented a draft bill concerning the investment to the Marshal of the Sejm, Elżbieta Witek.

With the reconstruction of the Brühl Palace and a set of tenements on Królewska street also falling within the scope of the project, the government’s plans would, said Duda, represent the final act in the post-war rebuilding of Warsaw.

As things stand, the investment would most likely see Saski Palace turned over to serve cultural purposes, the Królewska development utilized to act as the seat of the regional Voivodeship Office, and the Brühl Palace possibly taking the role as the future home of the Senate.

Naturally, so far the limelight has belonged to Saski Palace, but the neighbouring Brühl should by no means be considered an afterthought. 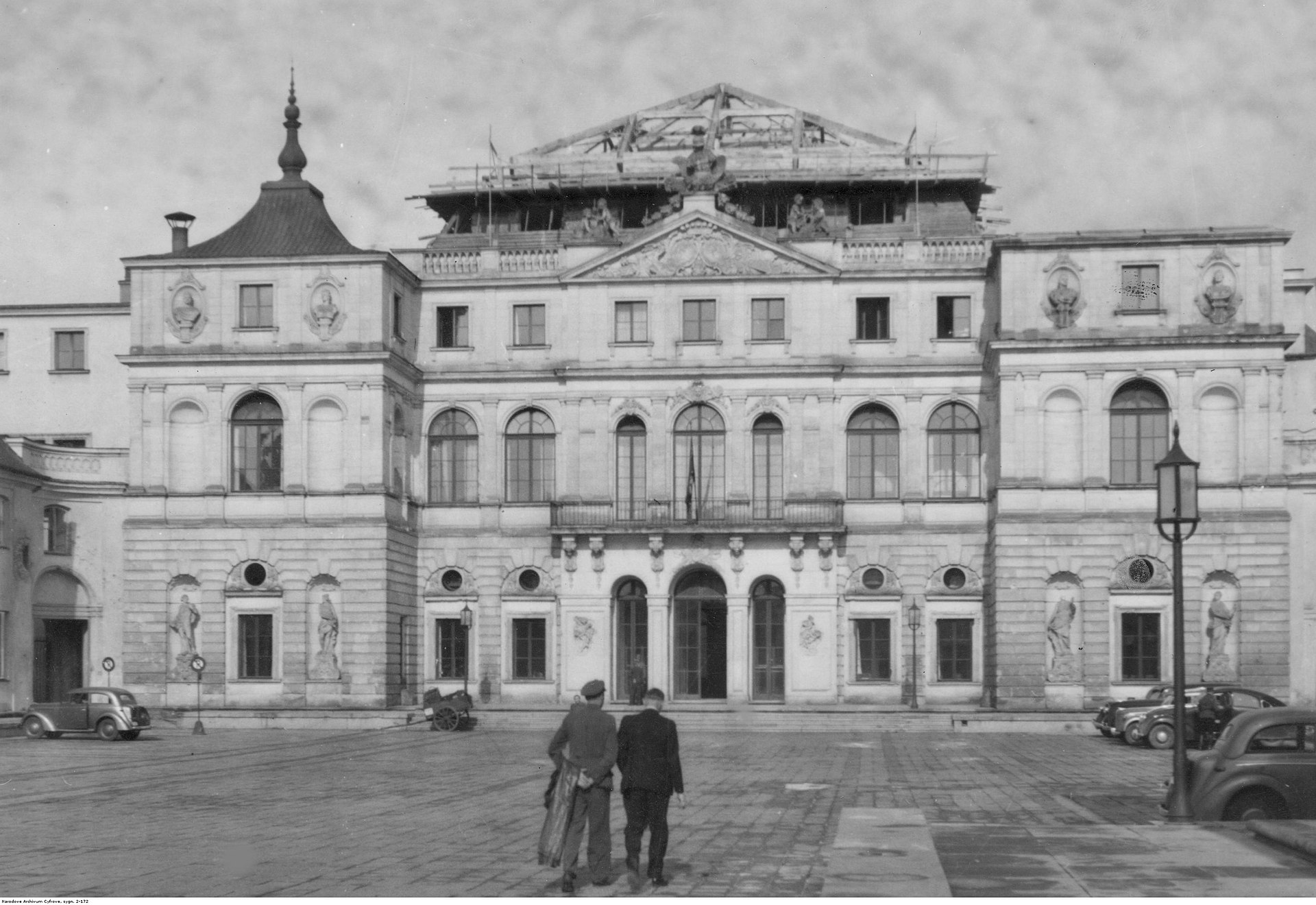 When Poland regained its independence following its painful partition the palace was earmarked as the site of the Ministry of Foreign Affairs who in turn demanded a total of 522 rooms including an apartment for the Minister.Public domain

Long harbouring associations with the country’s most prominent powerbrokers, the Brühl was originally known as the Sandomierski Palace and was completed in 1640 to act as the Warsaw base of Jerzy Ossoliński.

A figure of great significance, Ossoliński was a prolific diarist, the Governor of Sandomierz, an international envoy and, later, the Great Crown Chancellor.

However, his importance eroded after the election of King Jan II Kazimierz and he died of apoplexy in his palace in 1650. Though recognized as a great orator and statesman, his career path was defined by strategic maneuvering – despite his copious accomplishments, his death was not widely mourned.

It did, though, open a new chapter for the palace. Falling into the hands of the Grand Marshal of the Crown, Stanisław Herakliusz Lubomirski, the new owner hired the royal favourite Tylman van Gameren to embellish it, and this was done via the addition of two-storey alcoves capped with conical roofs and an array of pavilions and recesses adorned with monarchical statues.

Even so, this proved to be a precursor of what was to come, and it gained its most famous face after it was acquired by the King’s first minister, Henry Brühl, in 1750. 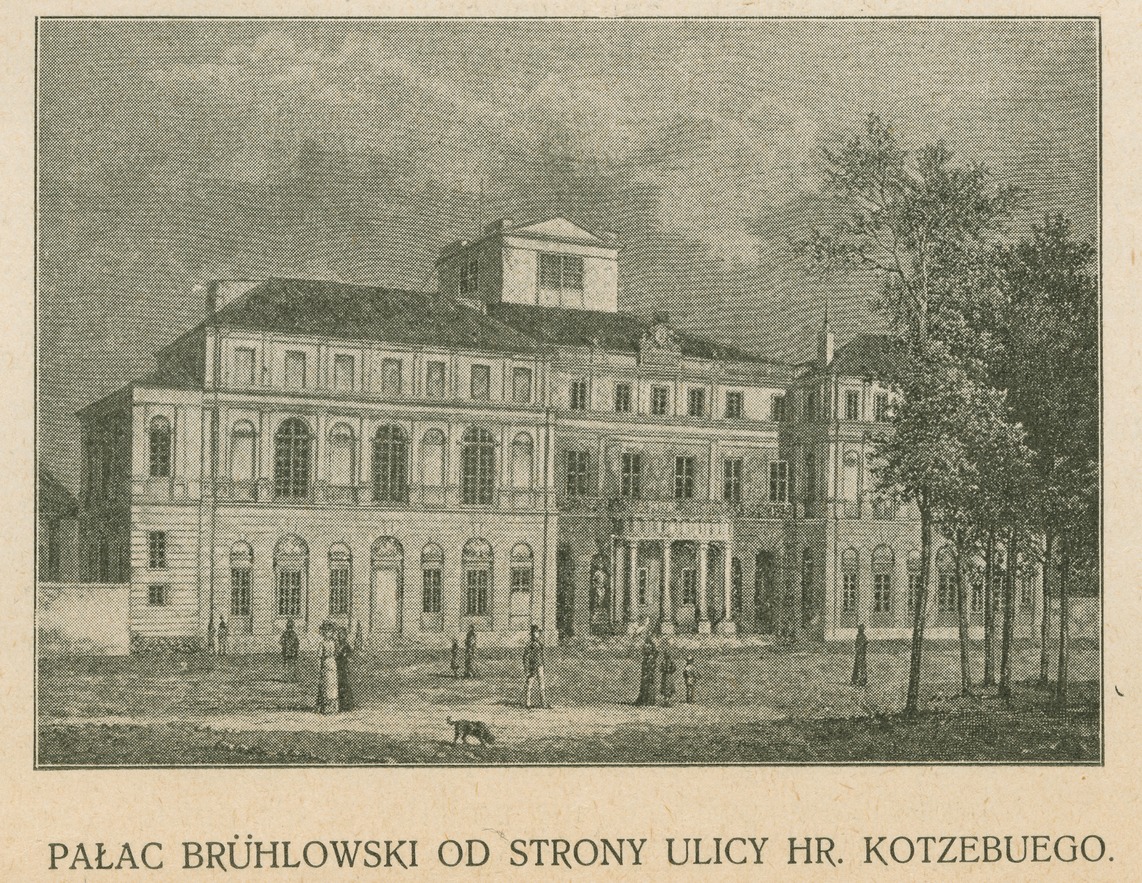 The palace gained its most famous face after it was acquired by the King’s first minister, Henry Brühl, in 1750.Public domain

Recruiting a pair of German architects by the names of Joachim Daniel Jauch and Johann Friedrich Knöbel, the duo transformed it into what was to become known as one of the finest examples of the late Baroque and Rococo style in Poland.

Notable for its ornamental fancies and indulgent flourishes, it was marked by a mansard roof and a magnificent gateway that faced onto Saski square.

Playing its part in one of the great intrigues of the era, in 1787 the Russian ambassador to Poland, Otto Magnus von Stackelberg, swayed his proxies in the Polish-Lithuanian Perpetual Council to spend the vast sum of one million zlotys not on boosting Poland’s military capacity as they had planned, but instead on the purchase of the palace.

Following more conniving and general trickery, it was then swiftly ‘donated’ to Russia to become the Russian Embassy. 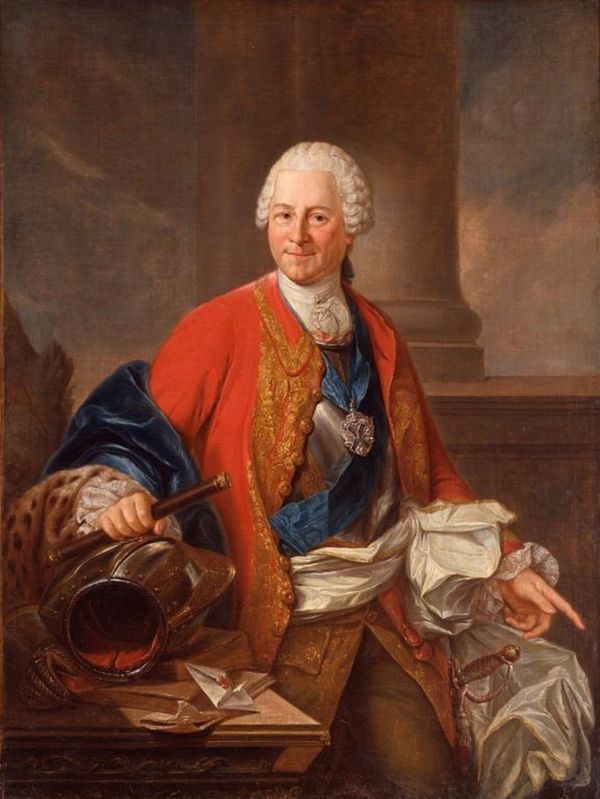 Brühl was a Polish-Saxon statesman at the court of Saxony and the Polish–Lithuanian Commonwealth and a member of the powerful German von Brühl family.Public domain

It was right after this that the next ‘starchitect’ of the era was brought in, this time the Italian-born Domenico Merlini – best celebrated for his work on Łazienki Park and Palace, his refurbishment of the Brühl saw it imagined anew in a more Neo Classical manner.

The changes were not just physical, and as the decades rolled forward the palace acted as the French Embassy as well as the residence of the Grand Duke of Russia, Konstantin Pavlovich.

Remembered in Russia for his gallantry, Poles were more acquainted with his tyrannical side and it was his ‘iron fist’ approach to rule that ultimately led to the outbreak of the November Uprising in 1830-1831.

When Poland regained its independence following its painful partition the palace was earmarked as the site of the Ministry of Foreign Affairs who in turn demanded a total of 522 rooms including an apartment for the Minister.

To achieve the seemingly impossible Bohdan Pniewski created one of the true wonders of Poland’s inter-bellum years. 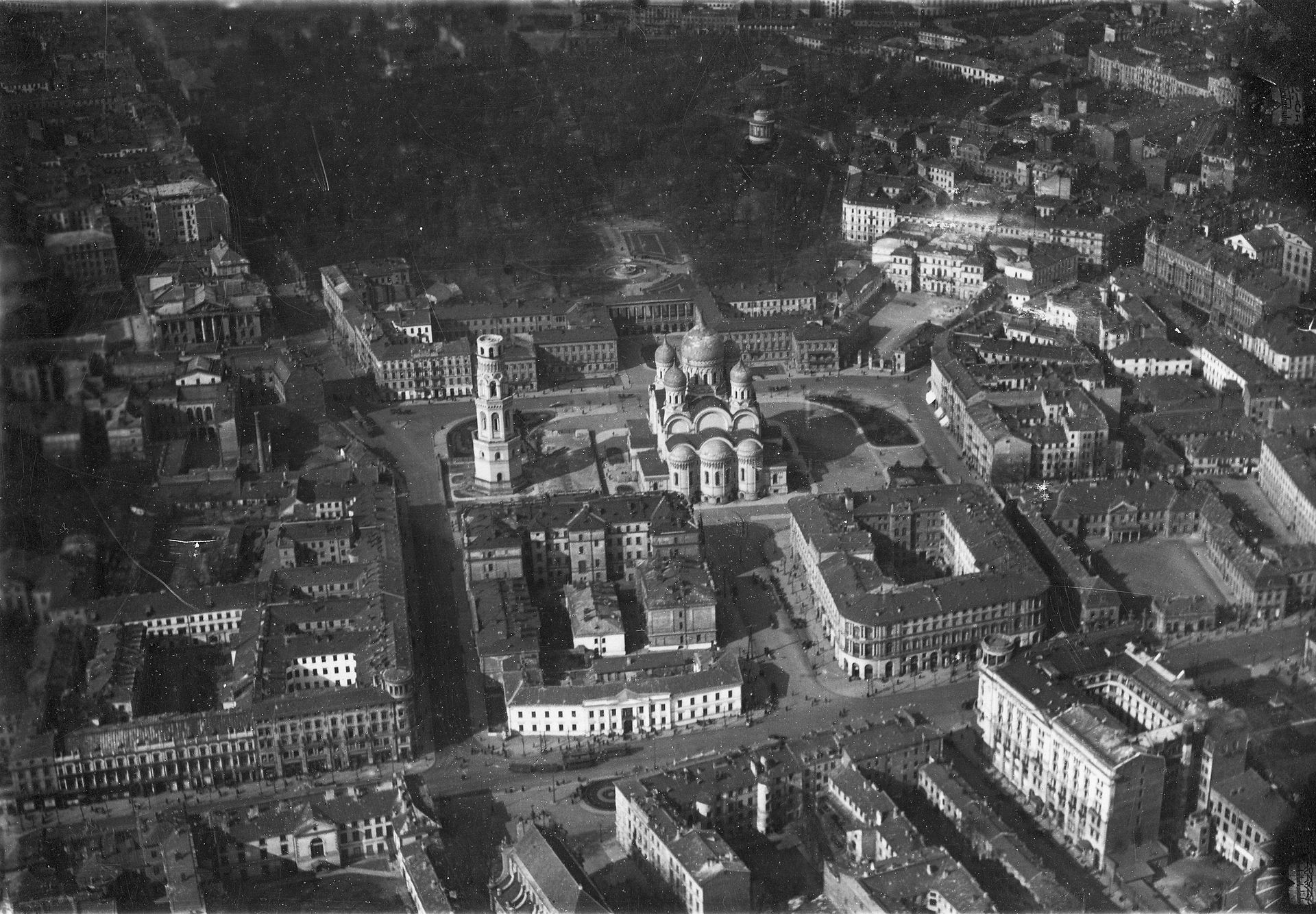 With the reconstruction of the Brühl Palace and a set of tenements on Królewska street also falling within the scope of the project, the government’s plans would, said Duda, represent the final act in the post-war rebuilding of Warsaw.Public domain

Though slammed at the time by some critics who accused his design of following an ‘Abyssinian aesthetic’, the project saw a new wing and underground built.

Lasting five years, construction was conducted to a tight deadline with the team under orders to finish their work for the 1937 visit of the Romanian King.

According to one report, the dress rehearsal for the royal visit saw tempers flare and Pniewski hauled off in an ambulance after attempting to break a crystal goblet on his own head.

But despite the detractors, most agreed that Pniewski’s labours had not been wasted – on one visit, for instance, Herman Goering declared the palace to be “wunderbar”. 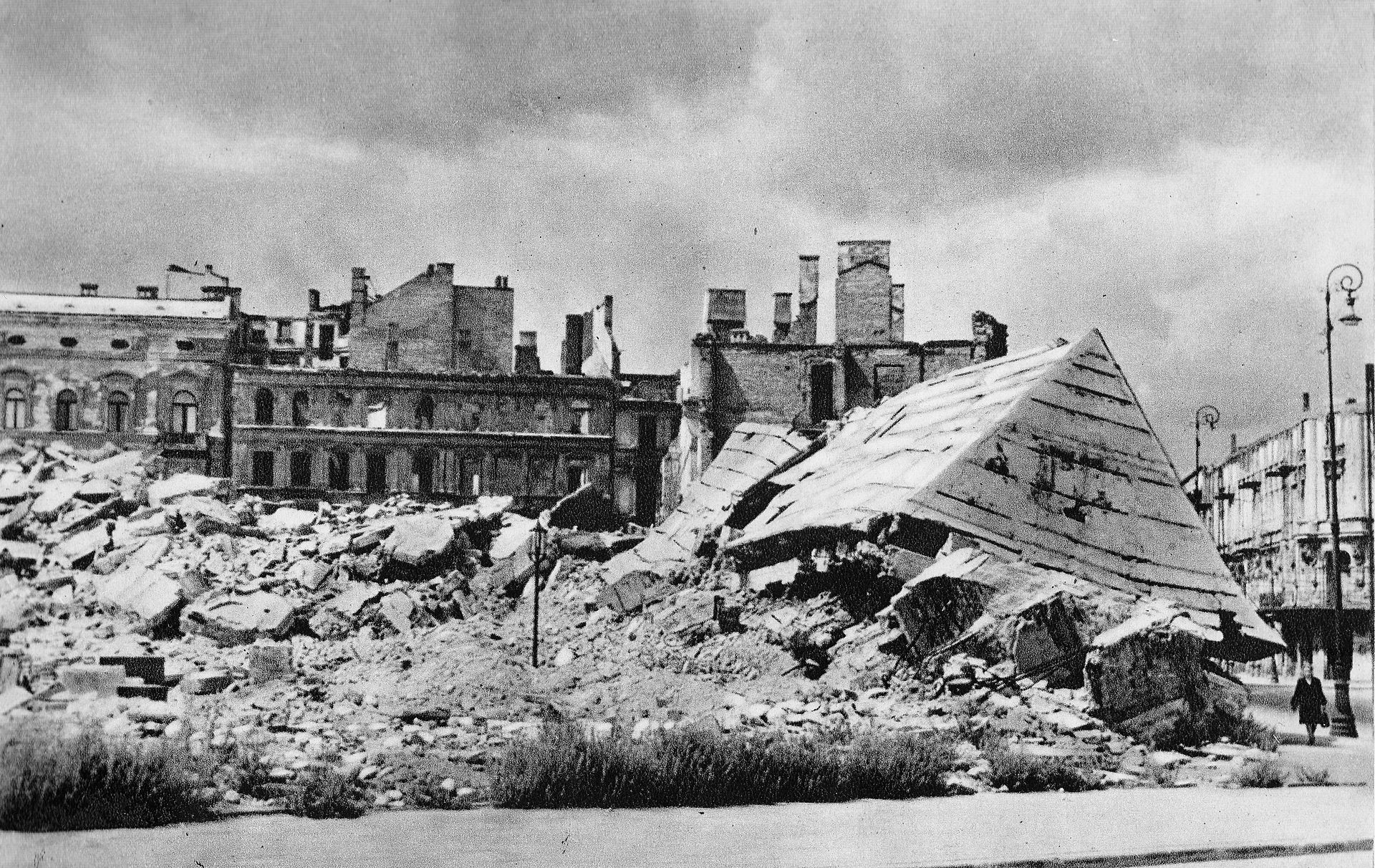 It is unlikely that the infamously corpulent Nazi was merely being diplomatic.

An unabashed elitist, Pniewski had carved a name for creating ‘statement’ buildings (a reputation he would maintain long after the war by rebuilding the Sejm, the National Opera, the National Bank HQ, a slew of ministries and the HQ of Polish Radio), and thanks to his efforts the new section of the Brühl became a calling card for monumental, classical modernism – it would not have been out of place in Mussolini’s Italy or Hitler’s Germany.

Befitting of its status as one of the most modern offices in Poland, it included such frills as an underground shooting range, a gymnasium, hairdresser and a cheap canteen that was of such merit that Deputy Minister Szembek, a celebrated gourmand, was a frequent visitor.

Decorated with paintings and portraits by the likes of Perronneau, Wittig and Wyspiański, not to mention busts of the Foreign Minister and his wife and, even, Pniewski himself, it was celebrated as a ground-breaking project that set a new benchmark in quality.

This was not lost on the Nazis. Sustaining damage during the 1939 Siege of Warsaw, the palace was quickly patched up and housed the centralized control room through which megaphone announcements would address the general population. 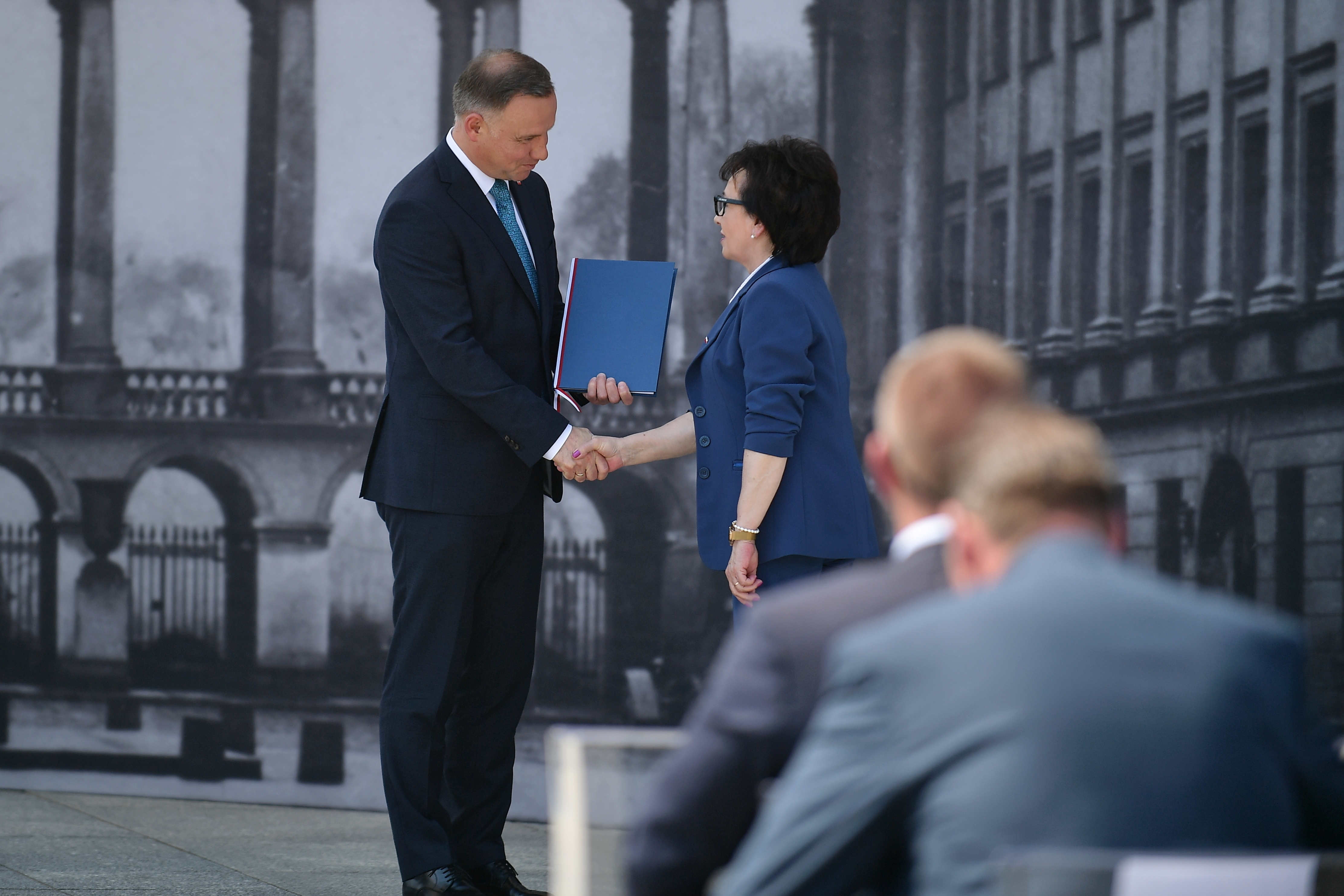 The ambitious project to rebuild the palace came a step closer to being realized yesterday after President Andrzej Duda presented a draft bill concerning the investment to the Marshal of the Sejm, Elżbieta Witek.Marcin Obara/PAP

Equally sinister, it became the seat of the Governor of Warsaw, an unsavoury character by the name of Ludwig Fischer. Under his tenure the Ghetto was established – and subsequently liquidated – and he became notorious for his disregard for human life.

According to some sources, one assassination attempt failed when a parcel bomb addressed to Fischer was opened by an underling.

Fischer would ultimately pay for his crimes; arrested by the Allies after the war, he was extradited to Poland and executed in Mokotów Prison in 1947. By that time, though, the Rococo pearl that was the Brühl Palace was already nothing but a memory.

Blown to smithereens on December 19th, 1944, it’s destruction – just a month before the city’s ‘liberation’ – was a final act of spite by the Nazis, coming as part of their twisted plan to obliterate the city in revenge for the Warsaw Uprising.

At a stroke, 300-years of history had been wiped off the map.

V4 presidents appeal to people to get vaccinated