One of Poland’s most iconic artists, Natalia LL used sexual imagery as a social commentary about communism and consumerism.

In a career spanning almost 50 years, Natalia LL (short for Lach-Lachowicz) is one of the first Polish female artists to be influential in the international feminist art movement of the early 1970’s, a critical observer of the rise of consumerism, particularly in communist era Poland, and an artist whose work is rooted in ideas of body art.

Initially studying printmaking and painting at the Academy of Fine Arts in Wrocław, she dropped these traditional art-practices in the 1960’s in favour of photography and, as she put it, the act of “permanent registration”. For her, photography, sometimes in conjunction with performance and installation works, was the ideal method of recording the fleeting and unique moments of common actions – eating, sleeping, having sex, talking.

One of her best known series of works is the 1972-75 collection of photographs and video pieces entitled Consumer Art, in which the artist photographed and filmed female models suggestively eating foodstuffs, such as bananas and sausages, or dribbling milk puddings from their mouths. The still photographs were presented in grids, featuring many photos shot in sequence.

Today, the images may be read as a somewhat childish sexual pun and hardly raise an eyebrow, but the work must be put in the context of early 1970’s communist Poland, the rise of a rather haphazard consumer culture and the ‘moral’ welfare of citizens of the state.

Bananas were an imported rarity at the time, often only appearing in shops around Christmas, or sold for inflated prices at small market stalls. Sausages, which are frequently seen as a staple of Polish cuisine were also hard to find at that time as meat was in short supply.

The photographs in the Consumer Art series play on the imagery of pornography – also an expensive and underground commodity of the communist era – yet the pictures emphasise a strange and witty fetish-like worship of these then hard to come by food products – the pun being that bananas and sausages were ‘objects of desire’ of the period. 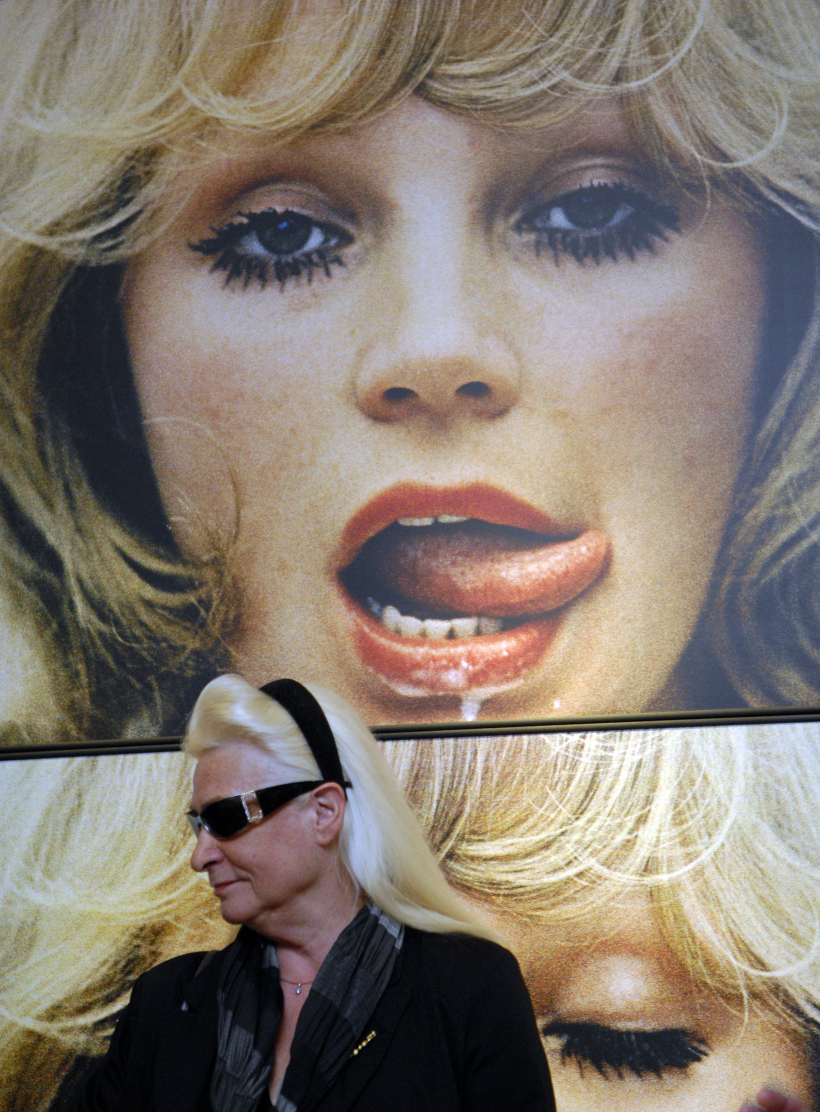 Natalia LL in front of her work
(Andrzej Rybczyński)

In 1971 the artist showed the photographic installation piece entitled Intimate Photography. The exhibition was held in the PERMAFO gallery in Wrocław, an artist-run space which she co-founded with her husband Andrzej Lachowicz and their friends. As an independent gallery they felt free to show whatever they wanted, yet Intimate Photography, with its claustrophobic box structure, covered in self-portraits on the outside and photographs of LL, her husband and friends having sex on the inside of the structure proved too much for the authorities, the show attracted the attention of the censors and was closed down after two days.

Being seen as an empowered woman artist fighting for her right to be unrestricted in her interests, thinking, sexual liberation and taking a stand against the traditionally male-dominated mentality of Poland at the time, her work and powerful stand drew the attention of the international feminist movement and this allowed her the opportunity to travel and exhibit her work abroad, including her participation in shows in the USA, Japan, France and Germany. She has also frequently exhibited alongside some of the world’s most influential contemporary women artists, including Marina Abramovic, Rebecca Horn, Annette Messager and performance artist Carolee Schneemann.

During the 1980’s her work took on a different aspect after a serious illness which involved two major blood transfusions. The artist refuses to talk about the specifics of the illness as she believed it would give energy to the disease. Her work became influenced by the supernatural, mystical religions and even Satanism, as she attempted to make sense of her near-death experience and the evil that can attack the body. The Destruction series of photographs from this period portray her face as death masks of a living person. She also withdrew from interests in feminism and consumerism and embedded herself in religious mystical texts by figures like Saint John of the Cross, Saint Teresa of Avila and Saint Thérèse of Lisieux.