Two of Poland’s leading architects are set to revive and expand a set of iconic ‘pyramids’ built in Ustroń Zawodzie six decades ago.

Widely cited as one of the best examples of post-war modernism, work on the original buildings was rubber stamped after plans were laid down in December of 1960.

Green lighted by regional authorities in Katowice, their over-arching vision foresaw the transformation of the Beskids. 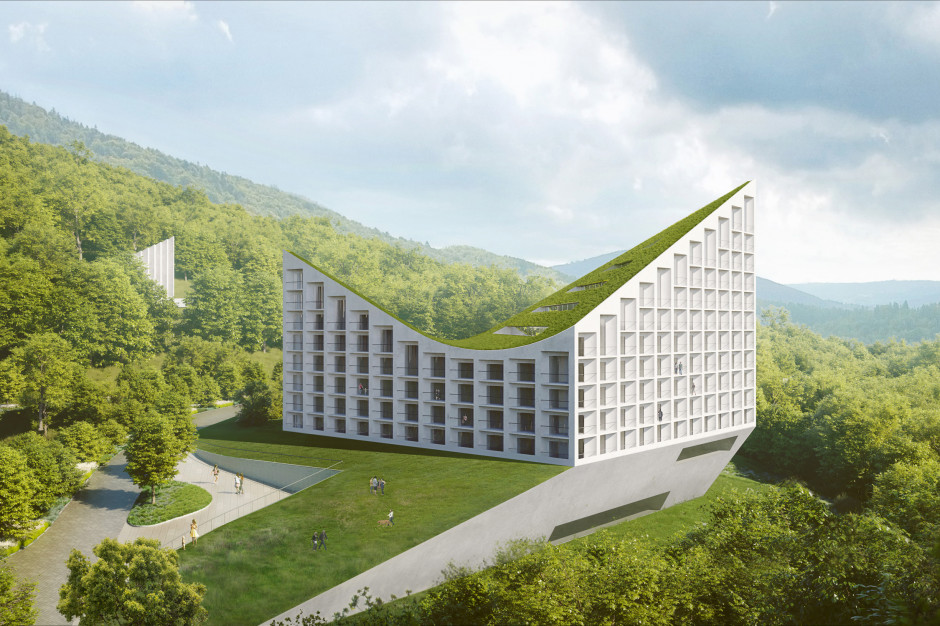 The town of Wisła would become a holiday resort whilst Szczyrk ‘the Silesian capital of winter sports’. Ustroń Zawodzie, meanwhile, was earmarked to become a spa and sanatorium complex.

To meet this end, Aleksander Franta and Henryk Buszka were recruited and this duo of architects were soon joined by Tadeusz Szewczyk. Their concept envisaged 28 pyramid-shaped buildings built over 200 hilly hectares.

Among other things, these would contain treatment facilities, patient accommodation and rehabilitation centres. 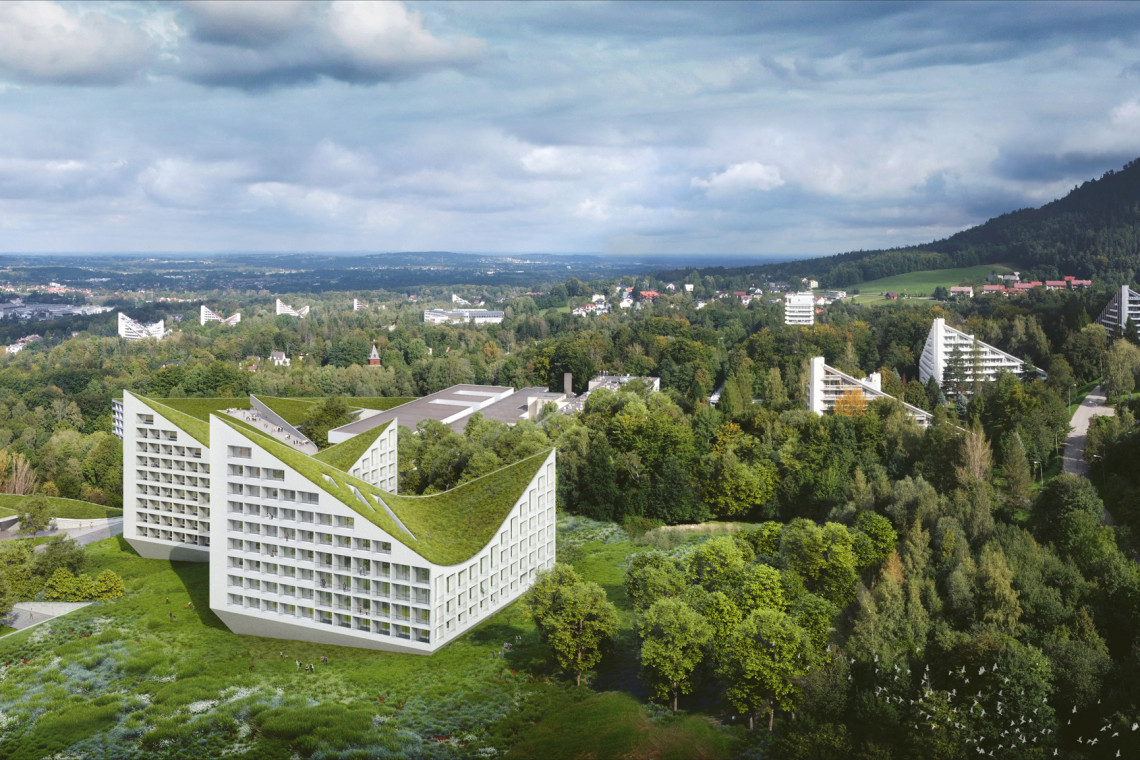 Defined by their lightness and functionality, much care was also given to preserving as much greenery as was possible. Press Materials

The project, however, was never fully realised. Only 17 pyramids were built (the last being put into use as recently as 1990), but despite this their extraordinary aesthetics saw them attain a legendary standing among lovers of design – so much so, they were featured in The Phaidon Atlas of 20th century world architecture.

Now, the pyramids of Ustroń Zawodzie are to be handed a new lease of life courtesy of two of the country’s best-known architects – Robert Konieczny of KWK Promes and Maciej Franta of the Franta Group.

Nominated twelve times for the prestigious Mies van der Rohe Award, Konieczny’s accolades have been numerous, and include the World Building of the Year (at the 2016 World Architecture Awards) for The Dialogue Centre Upheavals in Szczecin. 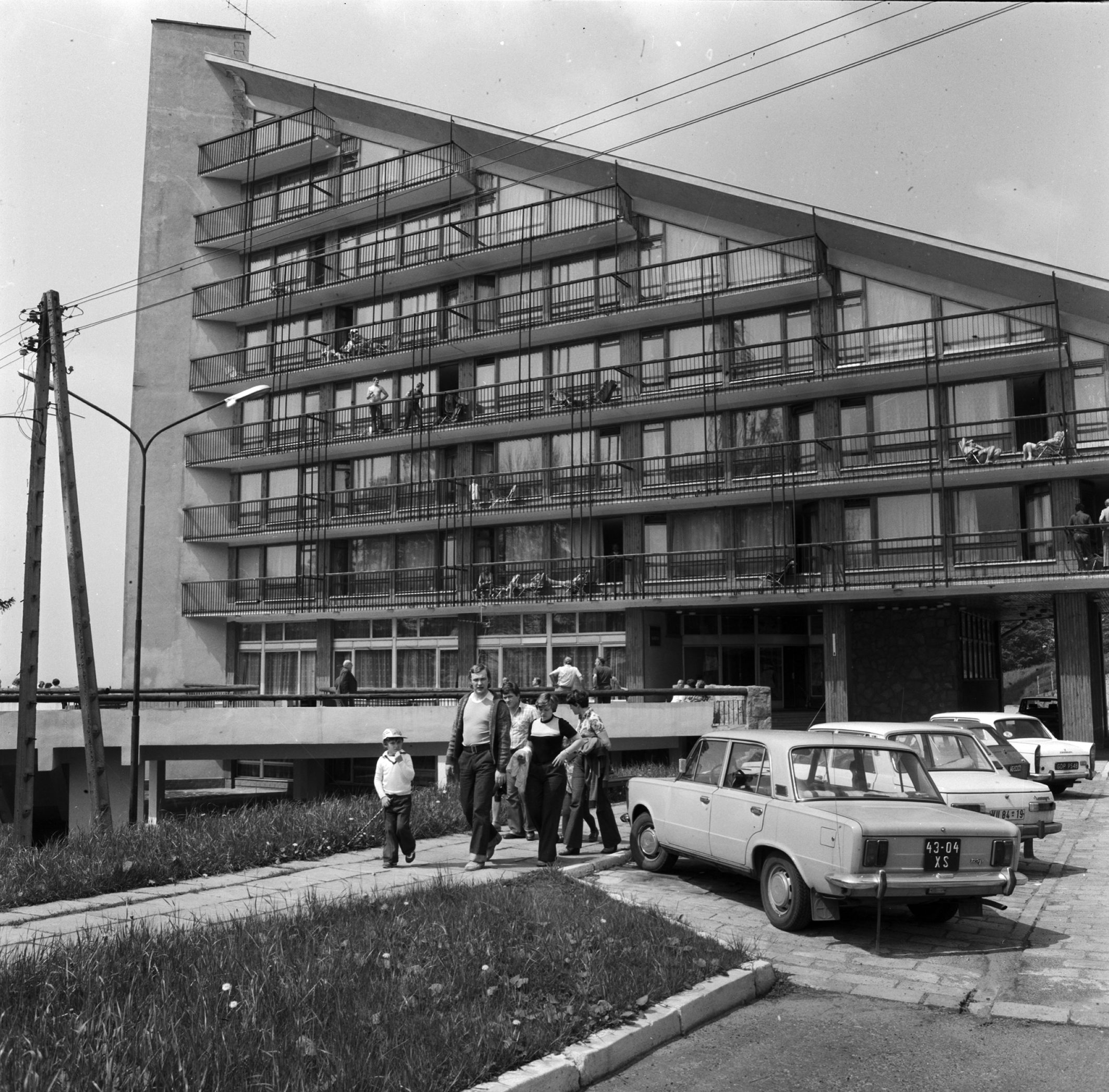 Franta, likewise, has also enjoyed a rash of global acclaim, not least for his recent Villa Reden project in Chorzów.

Yet despite authoring numerous projects since launching his own practice, for Franta it is this latest one that stands to be the most personal to date.

“Aleksander Franta was my grandfather,” he tells TFN, “so this was a huge thing for me to do, especially seeing that we were very close to each other.” 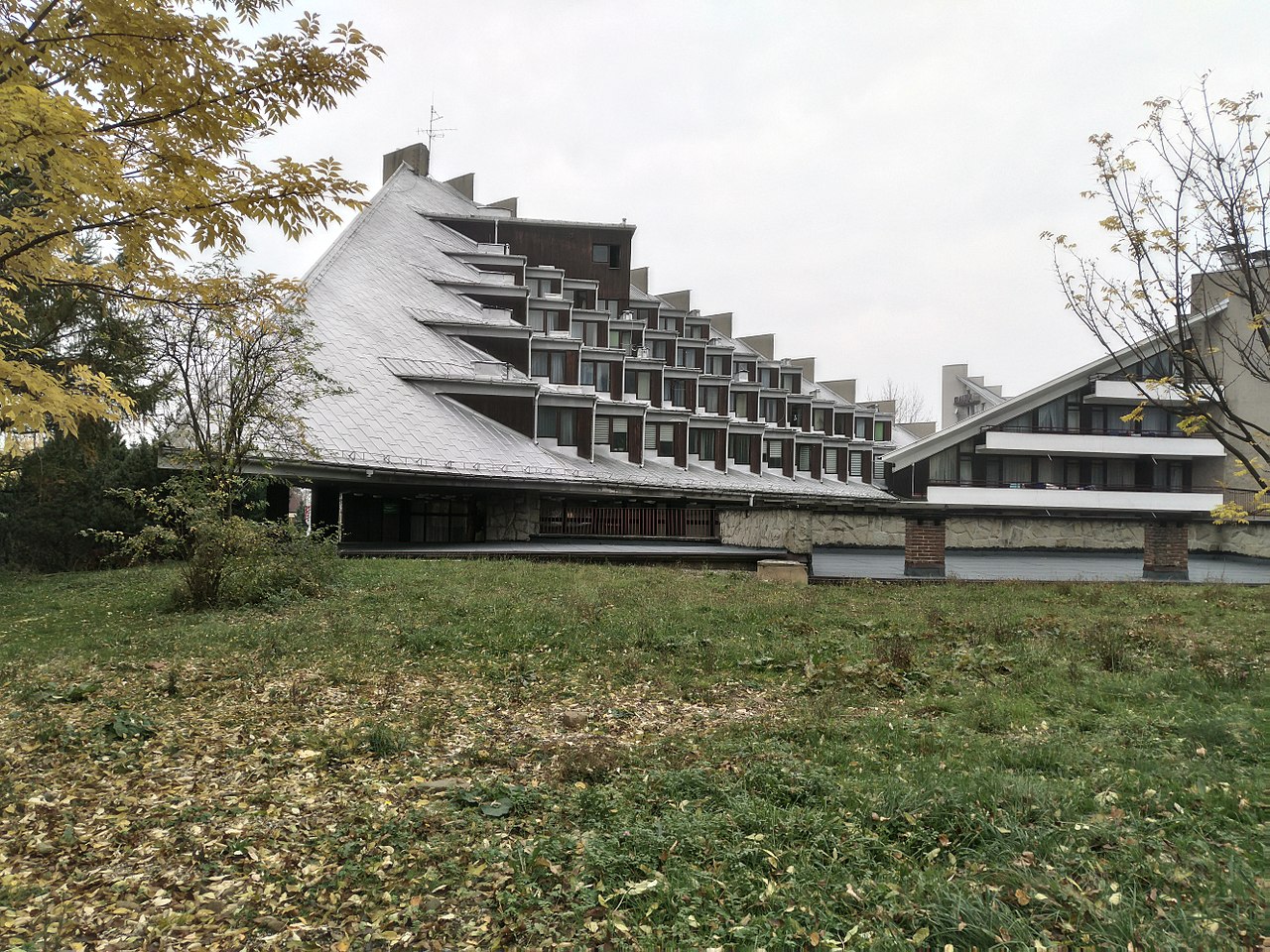 This angle aside, the concept of ‘continuance’ went far beyond family ties and came to act as a guiding principle for both Franta and Konieczny.

Speaking to TFN, Robert Konieczny says: “Even before I received an offer to participate in this project, I was asked by a magazine as to my thoughts on expanding the spa [editorial note: known as Konieczny’s Ark, one of his award-winning buildings can be found ‘floating’ close by]. I replied then that I liked the idea of extending it, but only if that was done with respect for the original plans.” 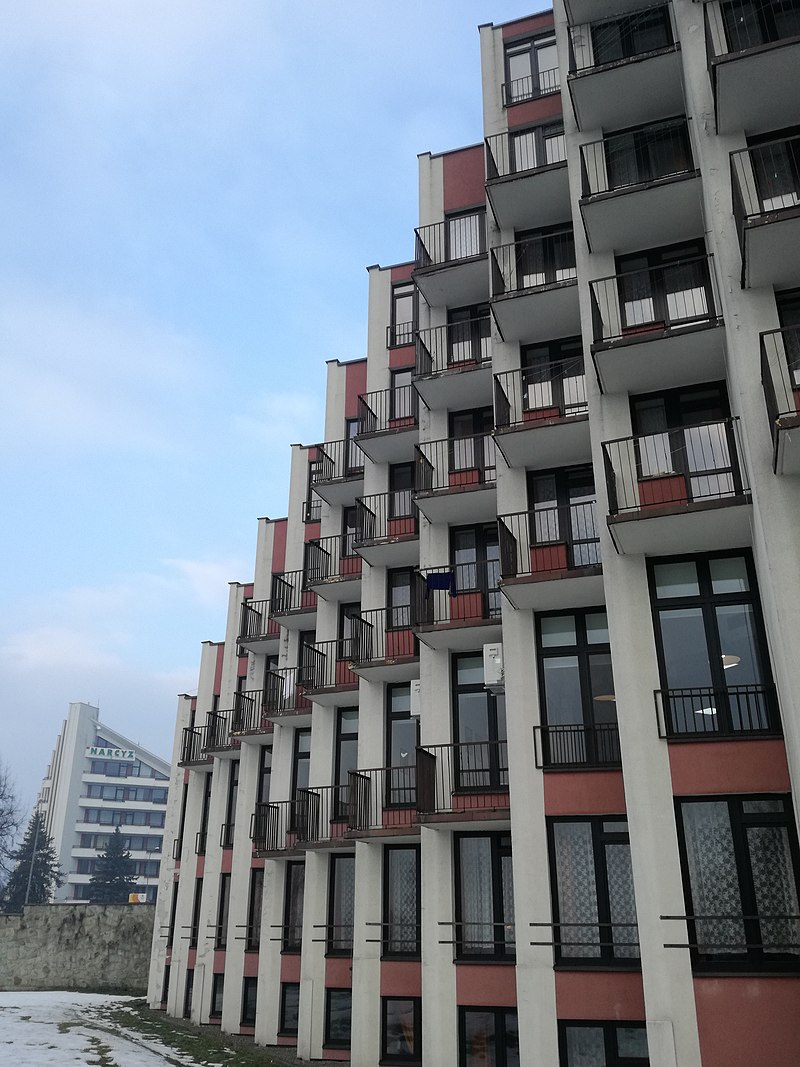 The original project was never fully realized and only 17 pyramids were built (the last being put into use as recently as 1990). CC BY-SA 4.0

This philosophy, too, was shared by Franta. “This complex is so iconic, one of the biggest fears I had was tampering with it too much.”

Expansion, though, was born from necessity rather than vanity or greed.

“As things stand, the sanatorium performs 6,000 procedures per day,” says Franta. “It has the capability to perform 10,000 but just doesn’t have the accommodation, so providing for this is essential for it to fulfil its potential.” 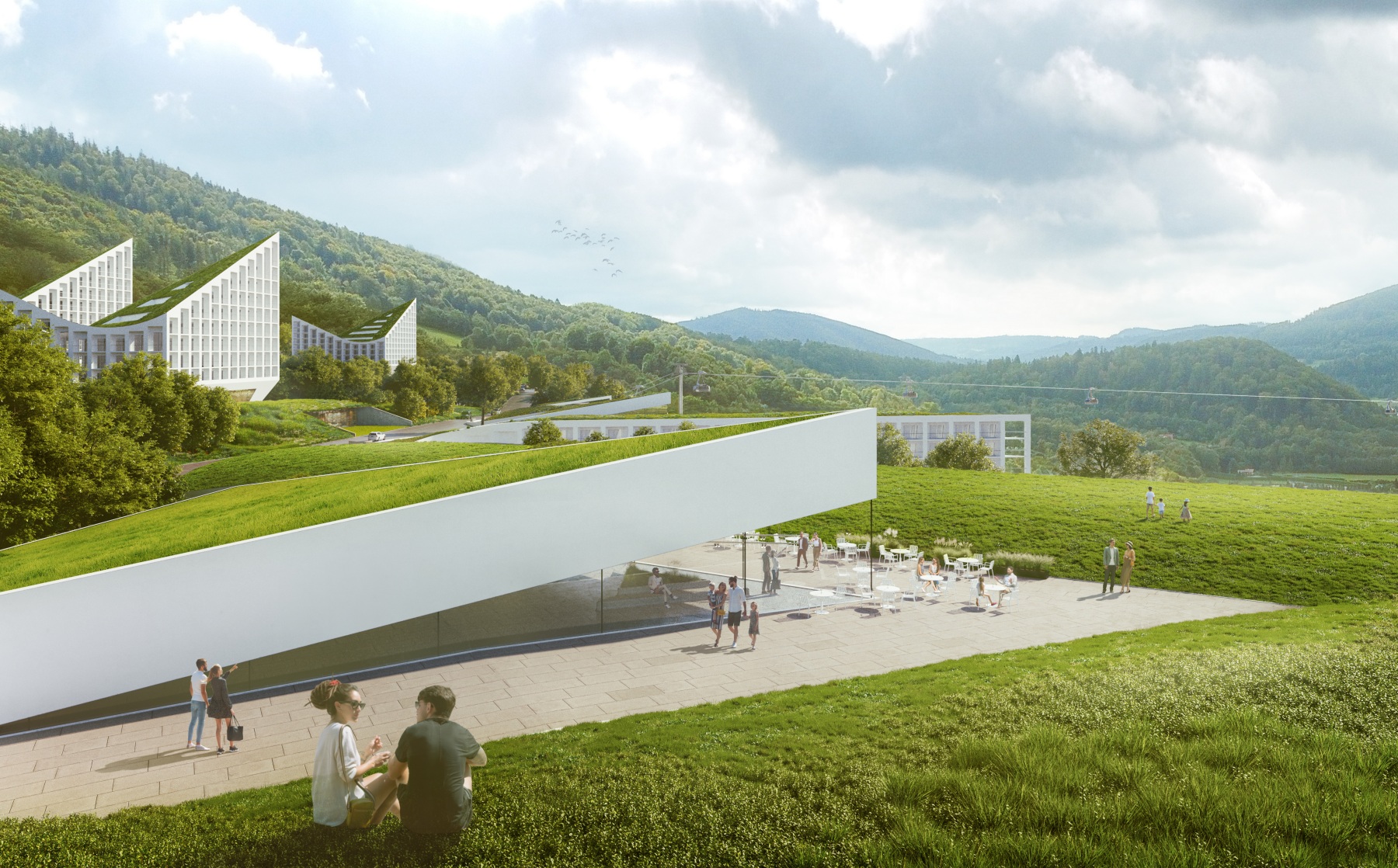 At the heart of the new complex will be a new promenade, running along the current main road that crosses the district from north to south.Press Materials

This point is underscored by Konieczny. “It’s important for people to realise why we are doing this – right now the hospital is operating at less than 60 percent so we’re talking about a lot of wasted ‘healing potential’.

“Greenery is crucial, so if you’re building on it you must do it for the right reasons; by adding to the sanatorium’s capacity though, we realised we would be saving lives, so the biggest question we faced, therefore, was how to deliver more space in the right way.” 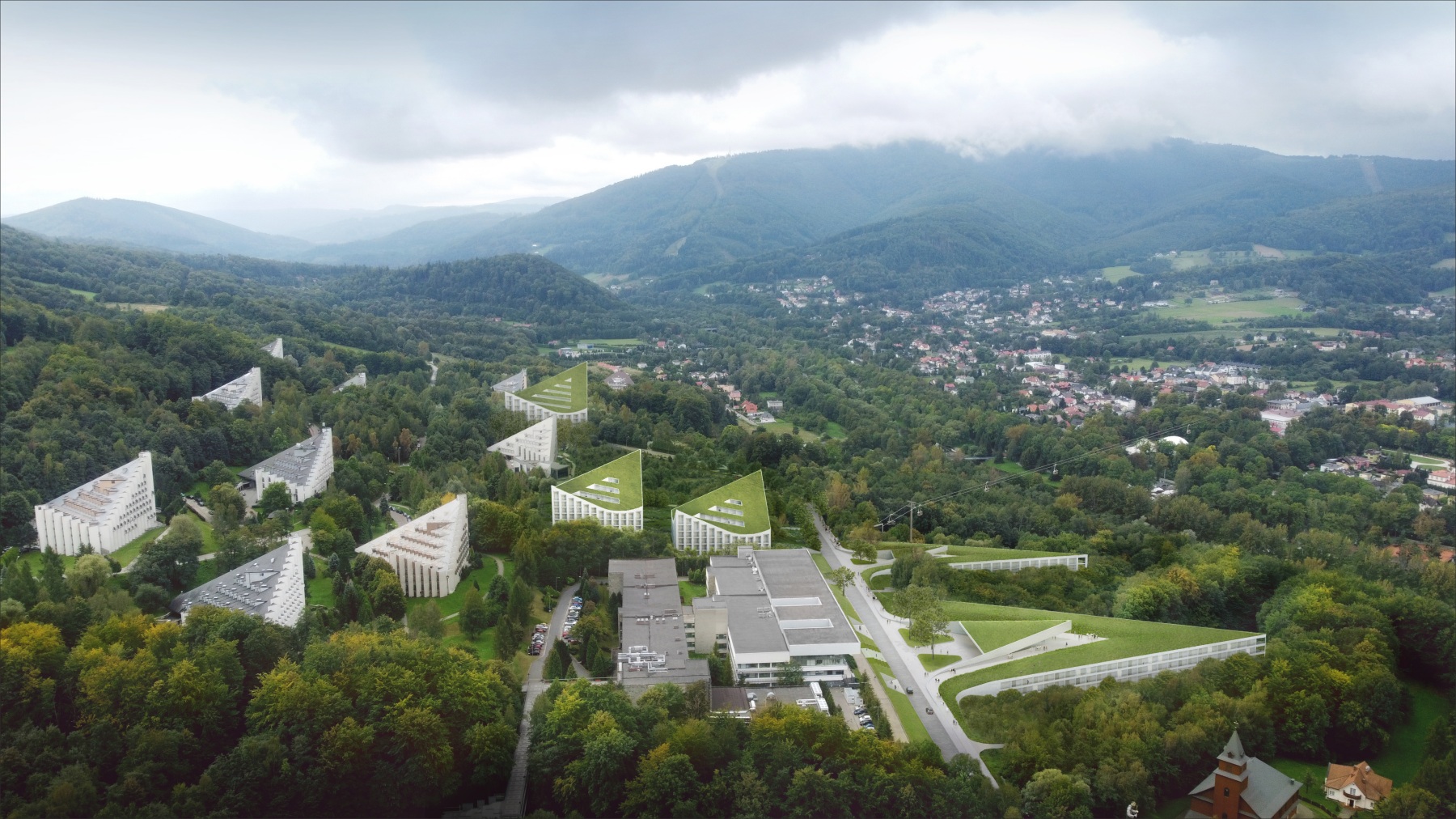 Currently something of an isolated enclave, the architects also sought to link the sanatorium to the town but in a manner that celebrates the environment instead of harming it. Press Materials

Giving order to the area was imperative to the duo, and they found this need amplified by the more contemporary additions and complications added since the 90s.

“The complex has changed significantly over the years,” says Konieczny. “Some plots that were meant to be built upon had become overgrown; also, a number of uninteresting, mismatched buildings had been added, thereby damaging the entire composition.

“It was then that both Maciej and I realised that any attempt to design new buildings in any way that deviated dramatically from the originals would only magnify the chaos by paradoxically strengthening everything that was alien there.” 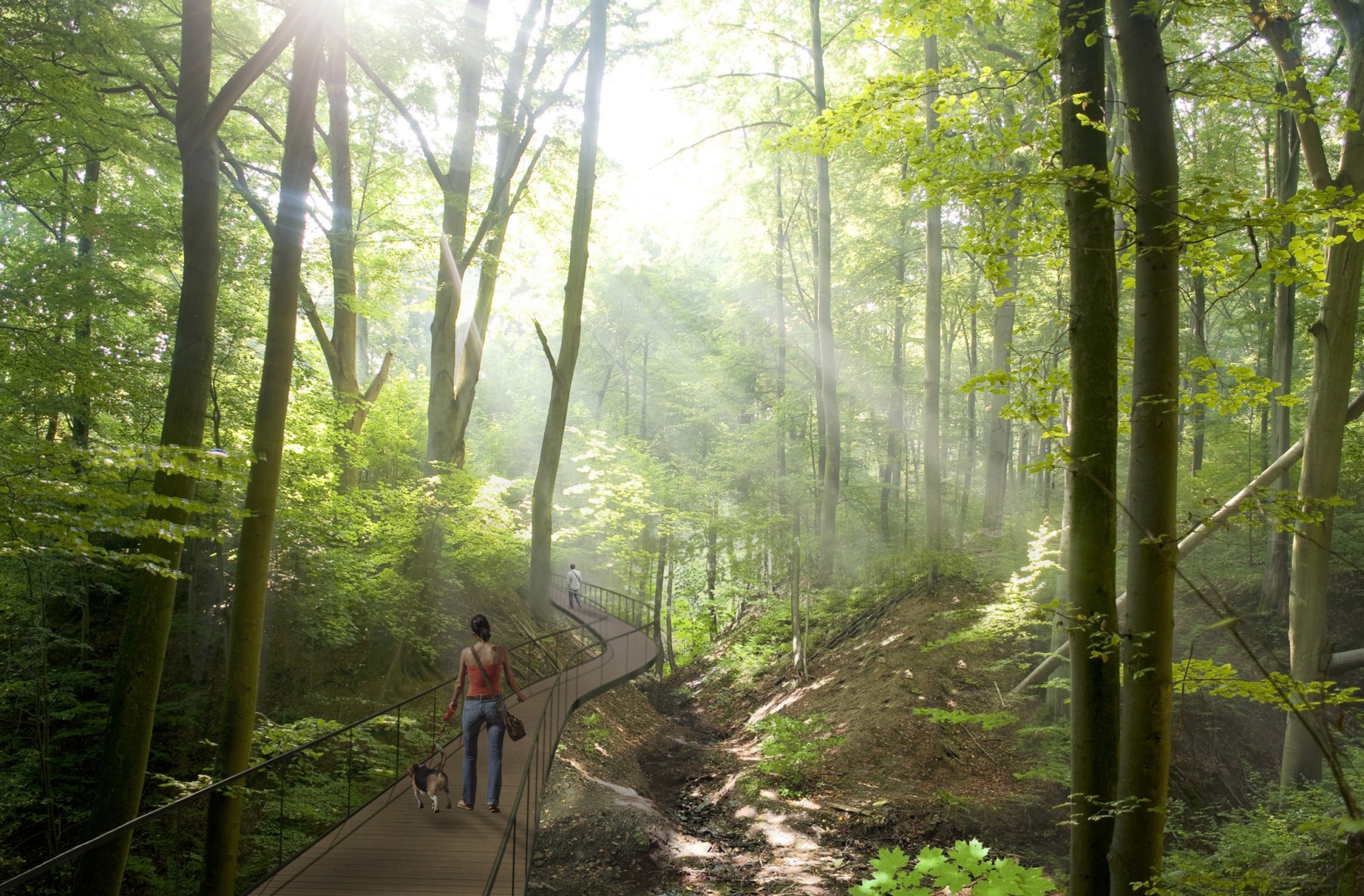 Rambling hiking paths will be suspended over the floor of local gullies and ravines and have been designed to snake through the woodland in a way that will afford users close contact with nature without interfering with its topography. Press Materials

Keen to add an underlying sense of organisation, the pair decided that the only viable solution would be to pay tribute to the existing landmarks so as to weaken the more random objects. “In a nutshell,” says Konieczny, “we opted for ‘a creative continuation’.”

From the outset, despite their domineering concrete form, the pyramids were lauded for the way they respected the area’s stunning natural surroundings, and these thoughts have underpinned Konieczny and Franta’s design.

Closely relating to the original, their trio of new pyramids and assorted facilities have been designed not to innovate, says Konieczny, but rather to slot contextually into the rest of the project whilst improving the urban design. “We want to complement not destroy the composition,” adds Franta. 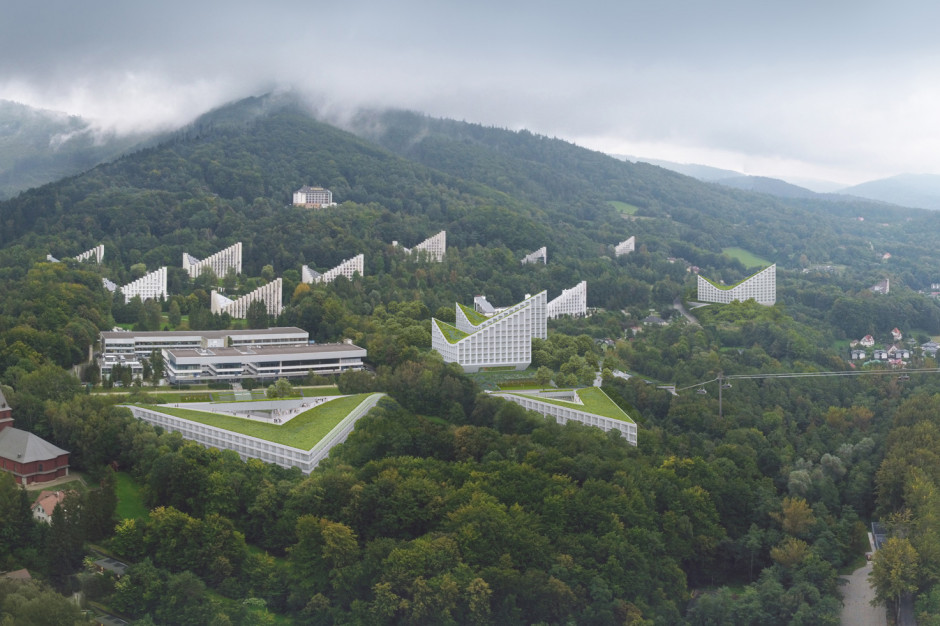 Raising user standards to 21st century levels but simultaneously paying reverence to ecological considerations, construction of the project is due to being next year.Press Materials

As such, the new pyramids feature grass roofs, underground parking spaces and an emphasis on sustainable construction. Defined by their lightness and functionality, much care was also given to preserving as much greenery as was possible.

Currently something of an isolated enclave, the architects also sought to link the sanatorium to the town but in a manner that celebrates the environment instead of harming it.

A cable car is planned, and so too cycling and hiking paths to reduce the need for cars. Particularly interesting, it is these rambling routes that promise to garner the most attention – suspended over the floor of local gullies and ravines, these walkways have been designed to snake through the woodland in a way that will afford users close contact with nature without interfering with its topography.

Raising user standards to 21st century levels but simultaneously paying reverence to ecological considerations, construction of the project is due to being next year.

With or without its Christmas Market, Wrocław’s main square is Poland’s best