There are no official statistics for how many followers of Progressive Judaism live in Poland, but it is estimated that it is almost half of the Jewish community.

This bright living room inside a villa in the leafy district of Wilanów, Warsaw, may look like any other in the area.

But what distinguishes it is that twice a week it turns into a meeting place for the confessors of Progressive Judaism, who gather to celebrate the Sabbath every Friday and Saturday.

The celebration is led by a young woman dressed in a short, yellow dress, smiling and singing psalms while swaying to the rhythm of music from a violinist.

Rivka (Rachel) is Polish and converted to Judaism after having completed a number of courses and exams enabling her to become a “Szac” – a person authorized to conduct the masses.

Around 20 fellow Progressive Judaism followers gather in the Wilanow BEIT synagogue. They greet each other with a cheerful "Shabat Shalom" and shake each other hands at the beginning and the end of the mass.

Halina, who is a member of the BEIT community, told The First News: "Our services are joyful and optimistic. After the prayer, we take a glass of wine and sit down for dinner. The time spent together is important.” 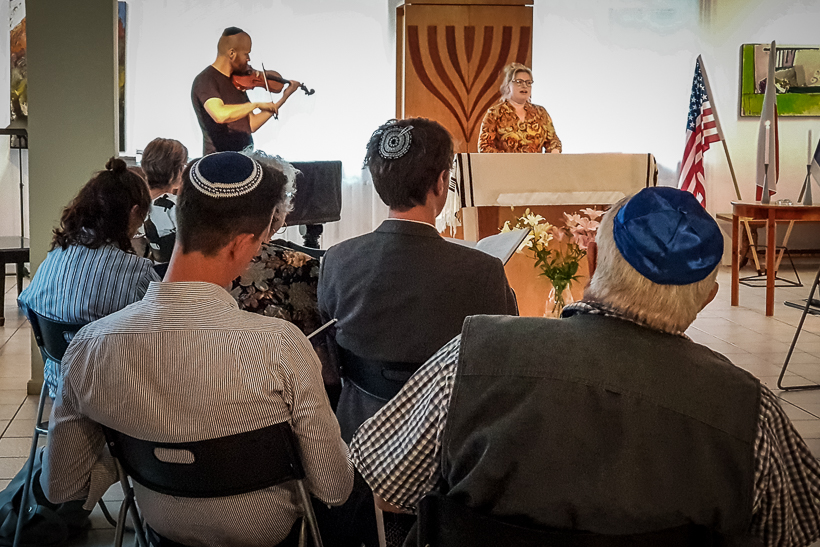 The BEIT Synagogue in Wilanów
(Konrad Kalbarczyk / The First News)

There are no official statistics for how many followers of Progressive Judaism live in Poland, but it is estimated that it is almost half of the Jewish community.

The practices of Progressive Judaism seek to grant full equality to all Jews, irrespective of gender and sexual orientation – while challenging laws that are contrary to Judaism’s fundamental principles.

Rabi Stas Wojciechowicz, who founded the Ec Chaim Synagogue in Warsaw told The First News: “ In progressive Judaism, it is important to have a high level of communication among worshippers, rather than between man and God. The moral issue is very important. I do not account for mistakes or impose, I educate.” His Synagogue has its seat in the centre of Warsaw, where prayers of the Sabbath and other Jewish holidays, lectures and Talmud studies are held.

He added: “Our community is getting strong, here in the heart of Europe.

“Poland is a country with truly western standards  – which surprised me, when I came here 10 years ago. The sense of national belonging, civic involvement in the life of the state, here we are no different from Poles.

“The Jews belonging to my community have always felt Polish on a national level and Jewish in terms of religion. We are Poles in this country, but of the Mosaic faith.